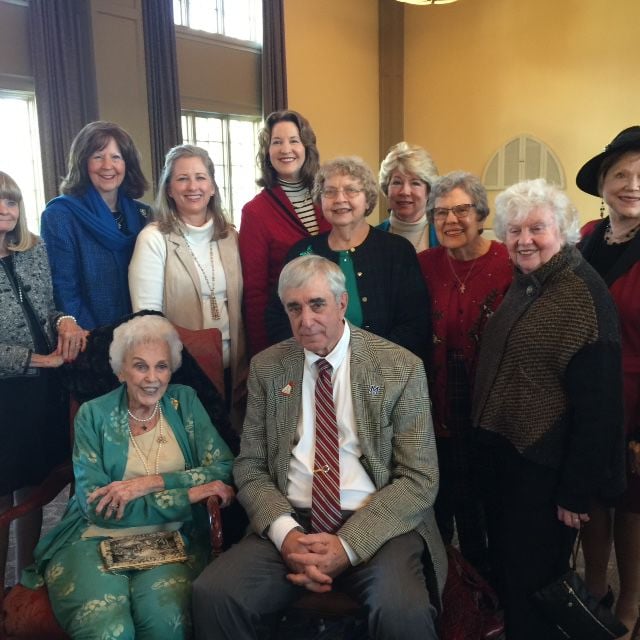 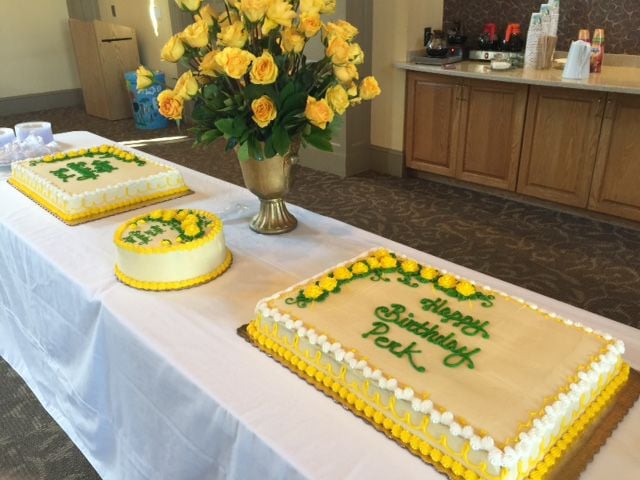 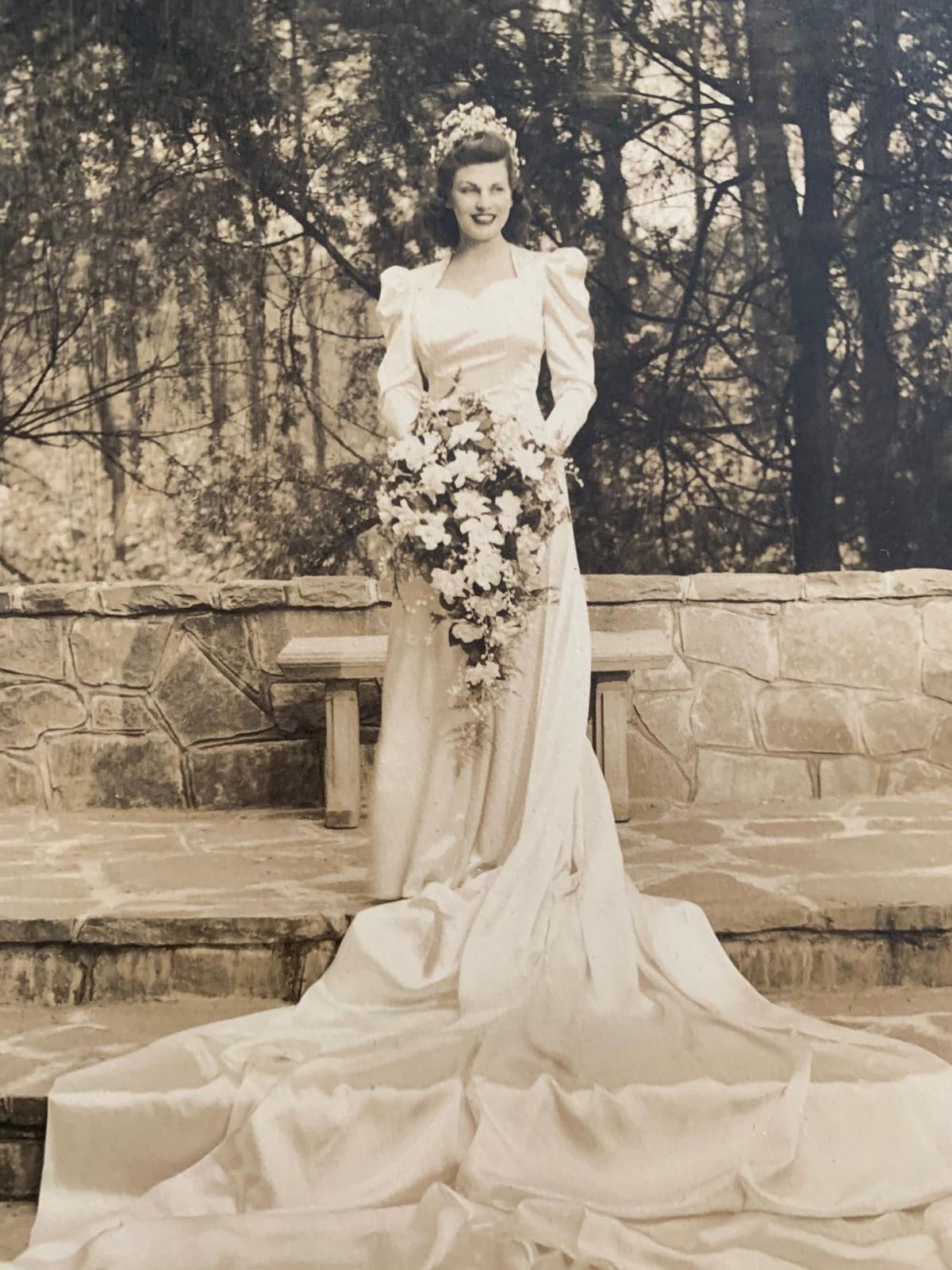 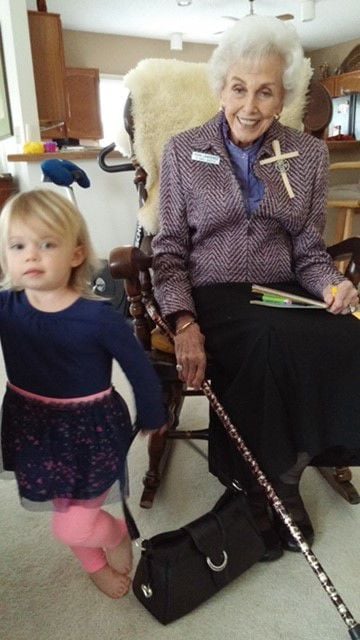 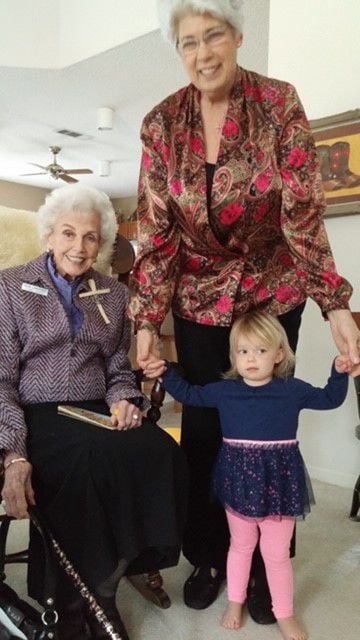 “I was born on Church Street, 400 yards from where I live now. My father delivered me. I lived on Church Street until I got married,” said Lawrence, the daughter of William Howard Perkinson, a doctor for 67 years in Marietta, and Emmie Lela Gramling Perkinson.

“I never have had any kind of career. I’ve never done anything special except I do have real fine children. I am sure my husband had a lot to do with that. That’s my only claim. I didn’t really have much to offer this world but my children are fine. That was most important to me,” said Lawrence, who was an avid volunteer, golfer, and bowler. She joined the Episcopal Church after marrying and still attends the St. Anne’s Chapter at St. James. She is a member of the Shakespeare Class and enjoys playing bridge. She lives independently and only quit driving in January 2019.

Lawrence became familiar with Mit FitzSimons through his sister, with whom she had attended Camp Dixie for Girls and Randolph Macon Women’s College.

“I was a sponsor of hers to a secret society that we had there (at Randolph Macon). She had pictures of her two brothers. I said, ‘I’d like to meet them.’ She said, ‘It would be the kiss of death if I introduced you them.’ So I never did get to meet them,” Lawrence said.

After returning from a summer house party in Anniston, Alabama, Lawrence and FitzSimons met. “My brother picked me up at the beautiful old terminal station. He said, ‘You have a date with Mit FitzSimons tonight.’ I said, ‘That’s just great. I’ve been trying to meet him for a couple of years,’” Lawrence said.

The friend who made the date did not make it clear to FitzSimons. “(Mit) didn’t show up. I sat at home the night I got home from being gone,” Lawrence said.

The date was rescheduled for the following night. “I met him. We had a date that Saturday nightclub hopping. Going from one place to another and dancing a couple of times,” Lawrence recalled.

On Sunday, Lawrence attended a Chi Omega sorority party at Colonial Homes in Atlanta and FitzSimons drove her home. “When (Mit) was getting ready to leave, he said, ‘You are going to marry me.’ He was very attractive but I wasn’t thinking in those terms,” Lawrence said.

FitzSimons invited Lawrence to Atlanta to see the diamond engagement ring his grandmother left for him. “I said, ‘I wouldn’t think of doing anything like that.’ It was an interesting conversation,” Lawrence said.

After a five month courtship, the couple was engaged and married in April 1941. They lived in Atlanta until FitzSimons’ death in 1994.

In 1995, Lawrence reconnected with a childhood friend, Treville Lawrence, through his sister, Helen Lawrence Vander Horst. They married in 1997.

“I had gone with (Treville) when I was 17. I wanted to go with lots of boys so we broke up. We got back together 60 years later. He had lived all over the world. My husband had died. We had almost ten years of real good happy times,” Lawrence said.

Lawrence said her biggest blessing was having a happy married life. “I was married to two wonderful men. That certainly has been a blessing for me,” she said.

“I was so lucky to get to come back to live in Marietta,” Lawrence said. “Coming back to Marietta was something I never expected to do after living in Atlanta for 55 years. It turned out to be a lovely transition. I have been amazed and so grateful for the friendships I’ve made. Everybody is younger than I am. They’ve been nice enough to include me as a friend.”