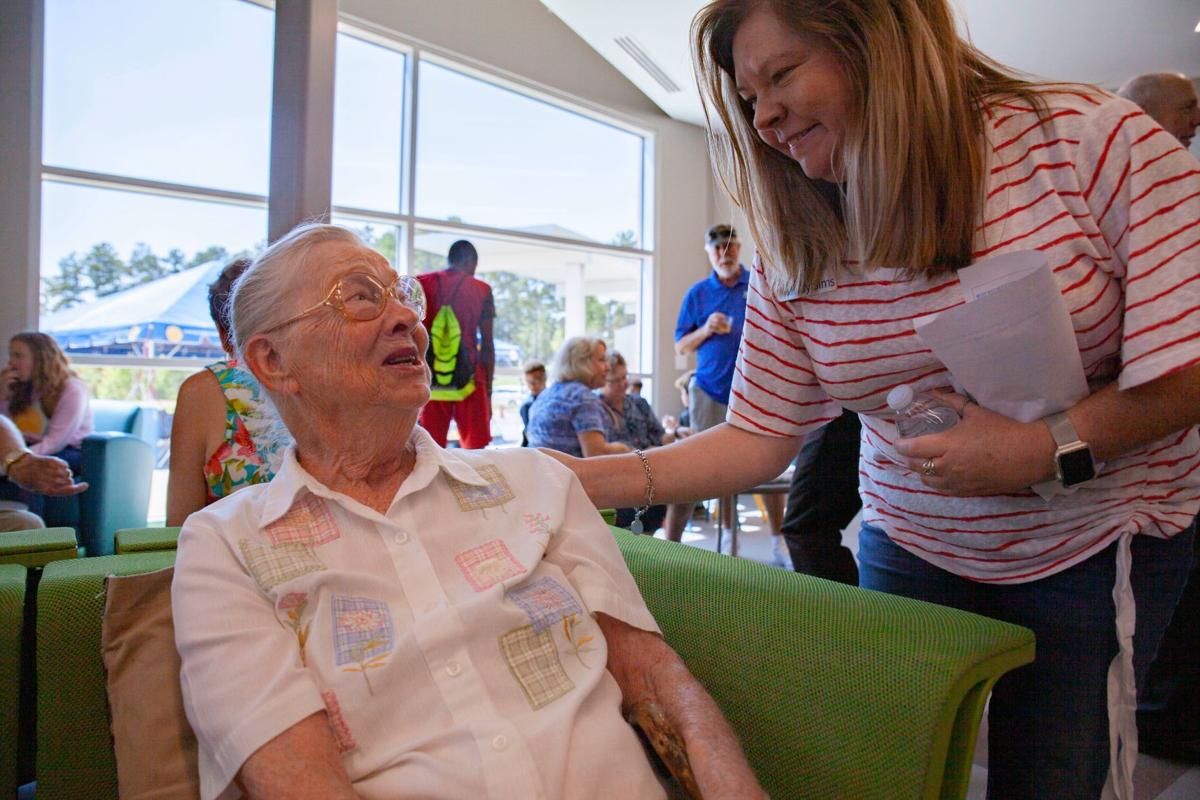 Nancy Maxwell, left, has gotten to know many in the Cobb Public Library System personally. The 89-year-old Acworth resident said she visited the Acworth library nearly every day for decades. 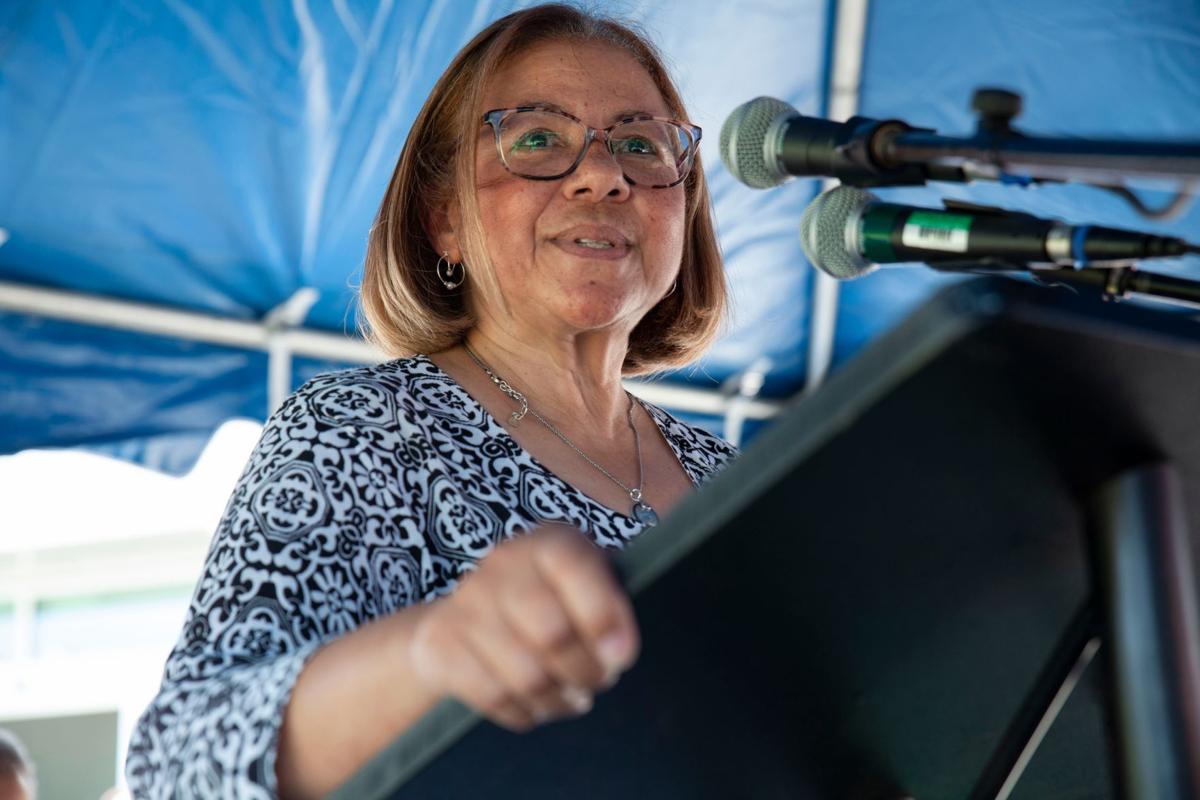 Helen Poyer, director of the Cobb County Public Library System, addresses the crowd at the ribbon-cutting on the new North Cobb Regional Library on Thursday. 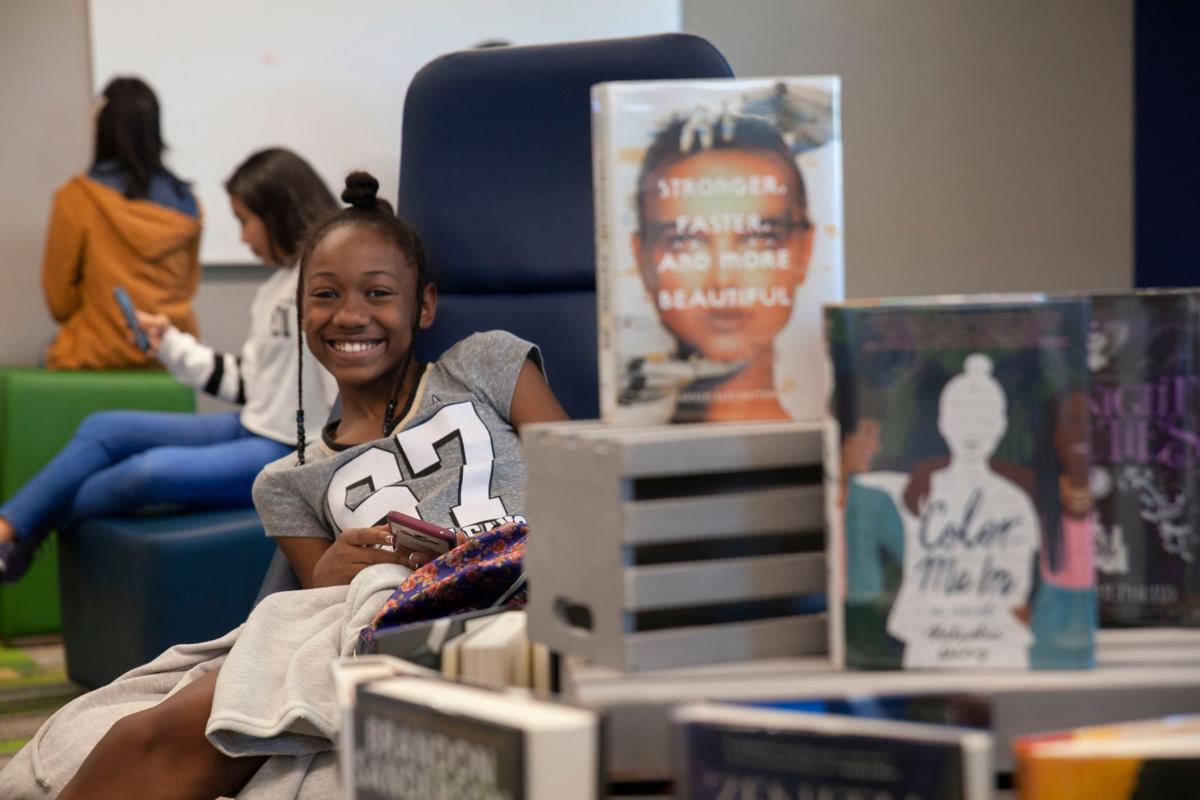 Trinity Walker, a seventh grader at Awtrey Middle School, explores the teen room at the new North Cobb Regional Library on Thursday. Walker visited the library with 60 of her schoolmates. 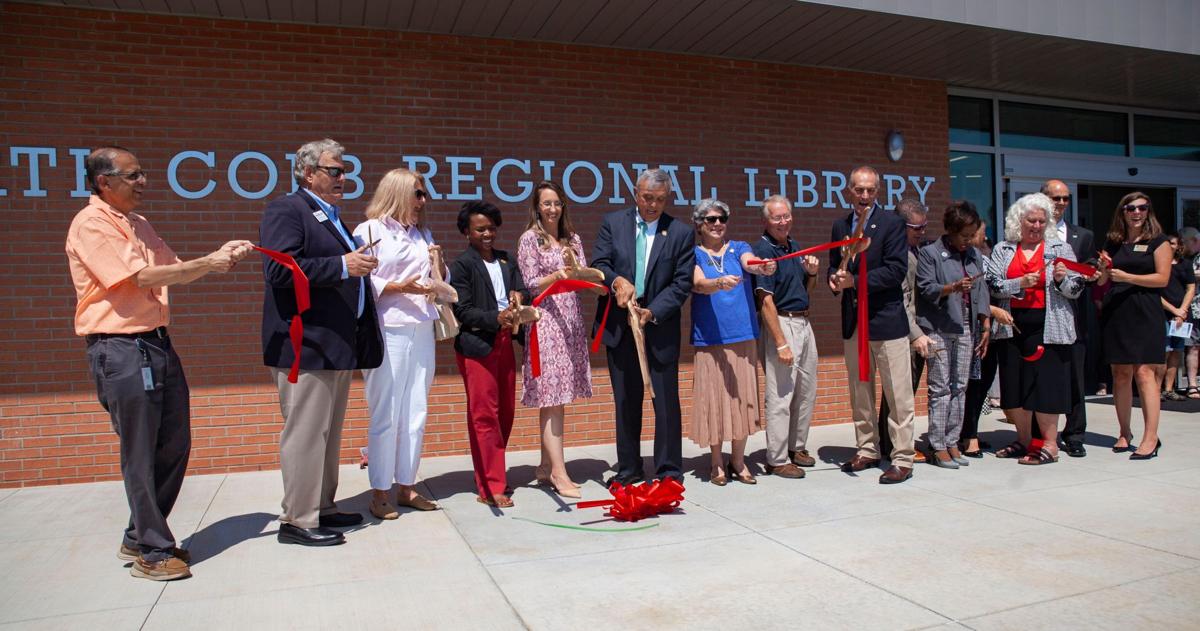 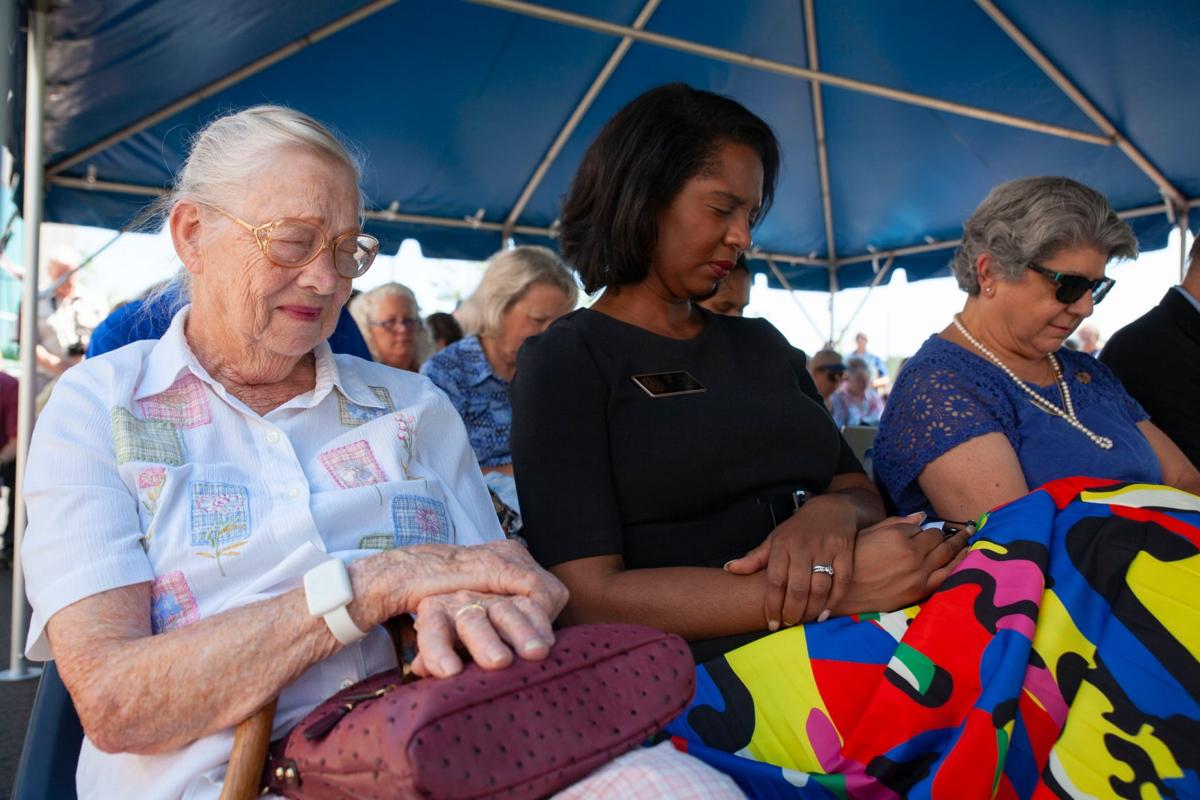 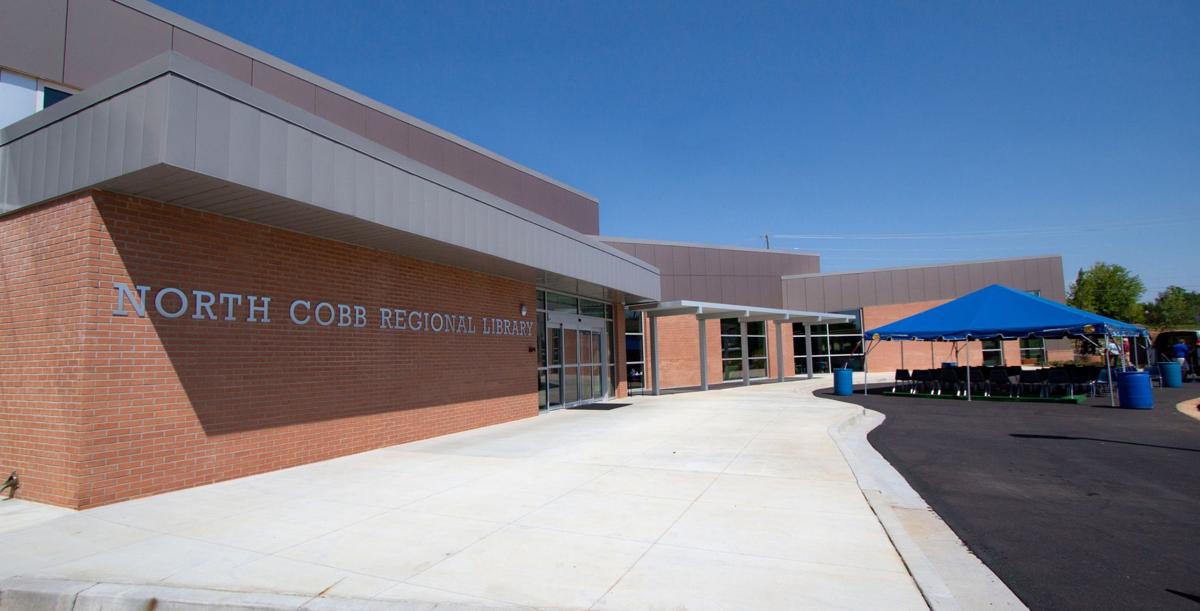 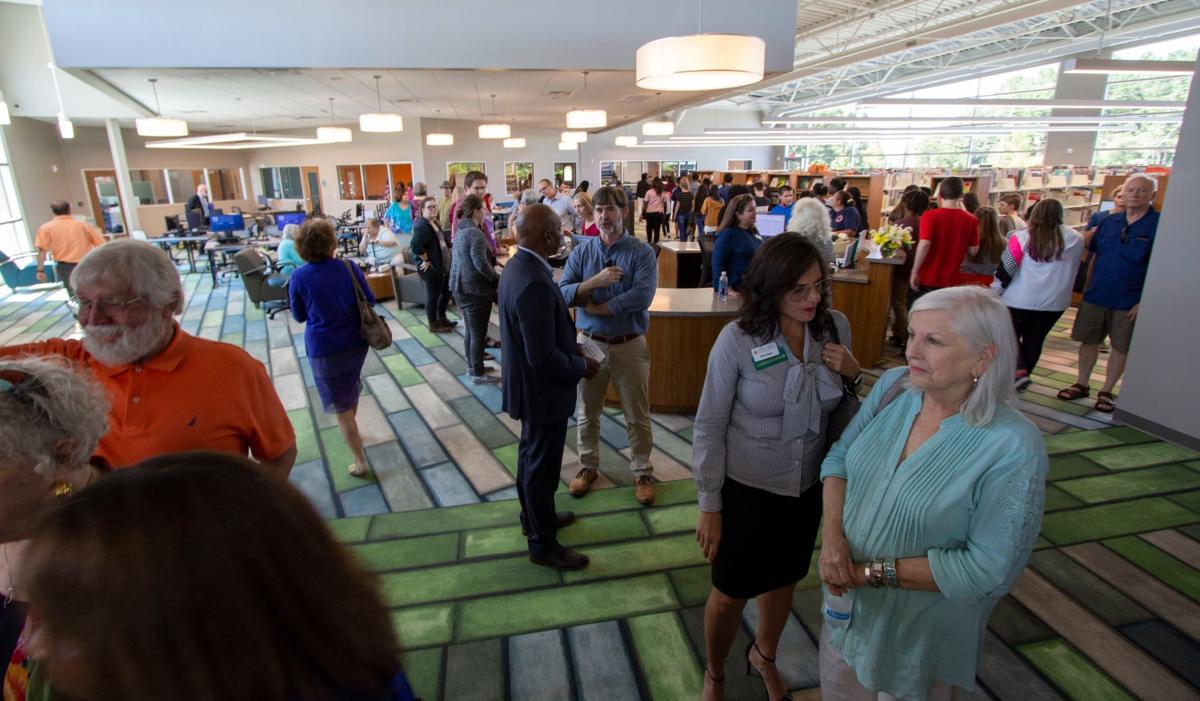 Hundreds attended the grand opening and ribbon cutting ceremony at the new North Cobb Regional Library on Thursday. The library officially opened its doors to patrons on Tuesday. 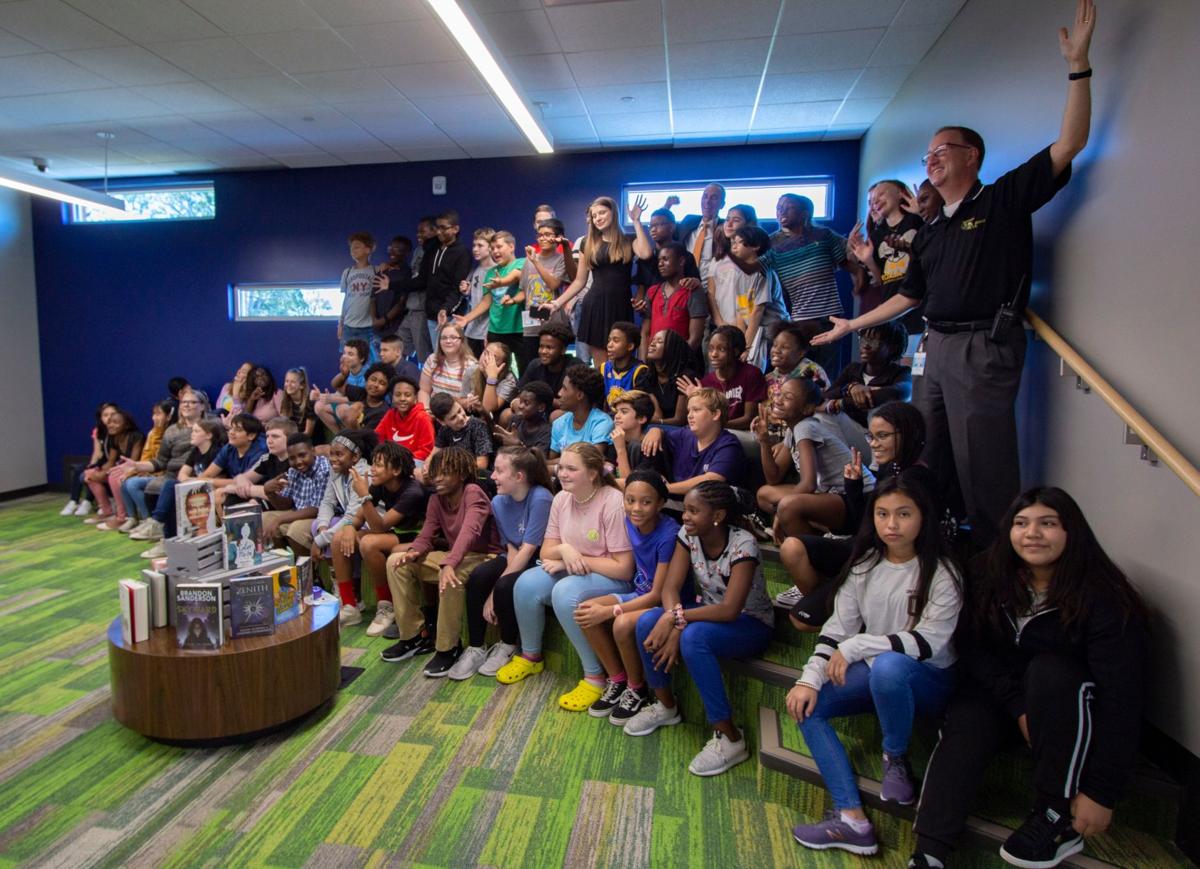 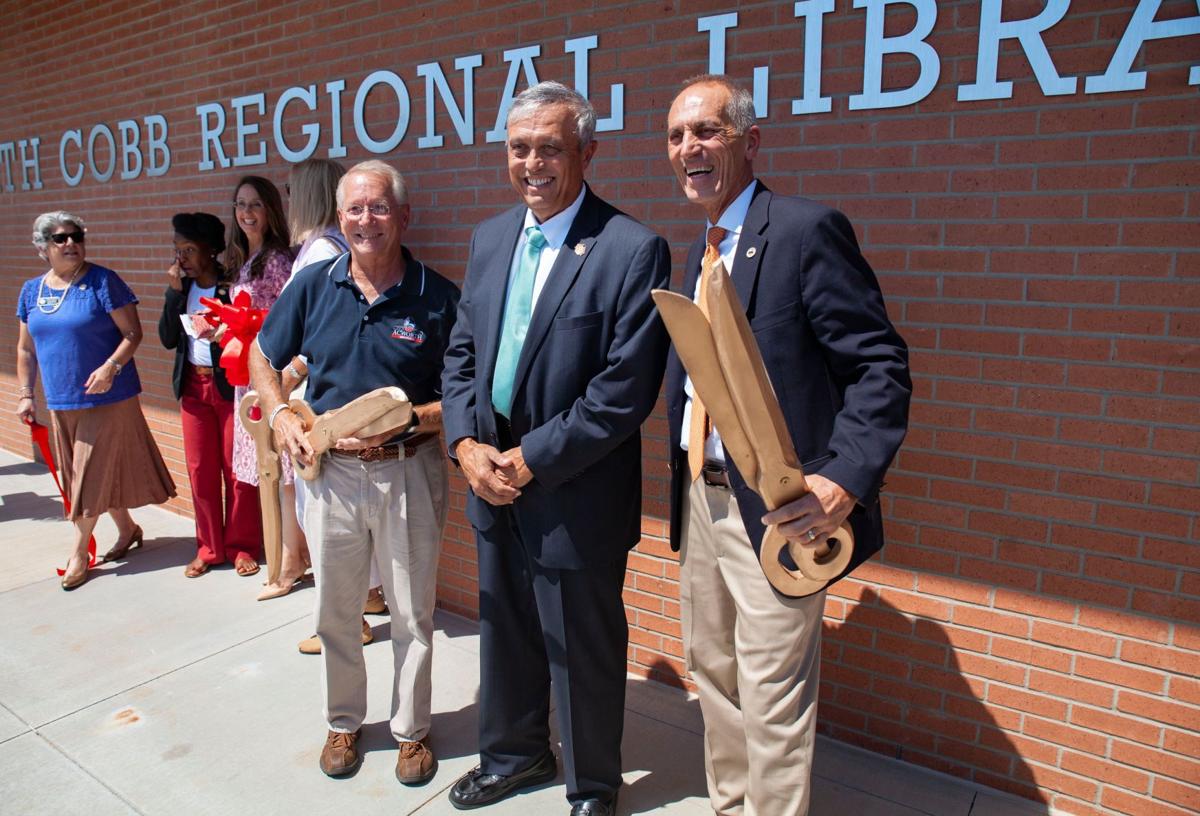 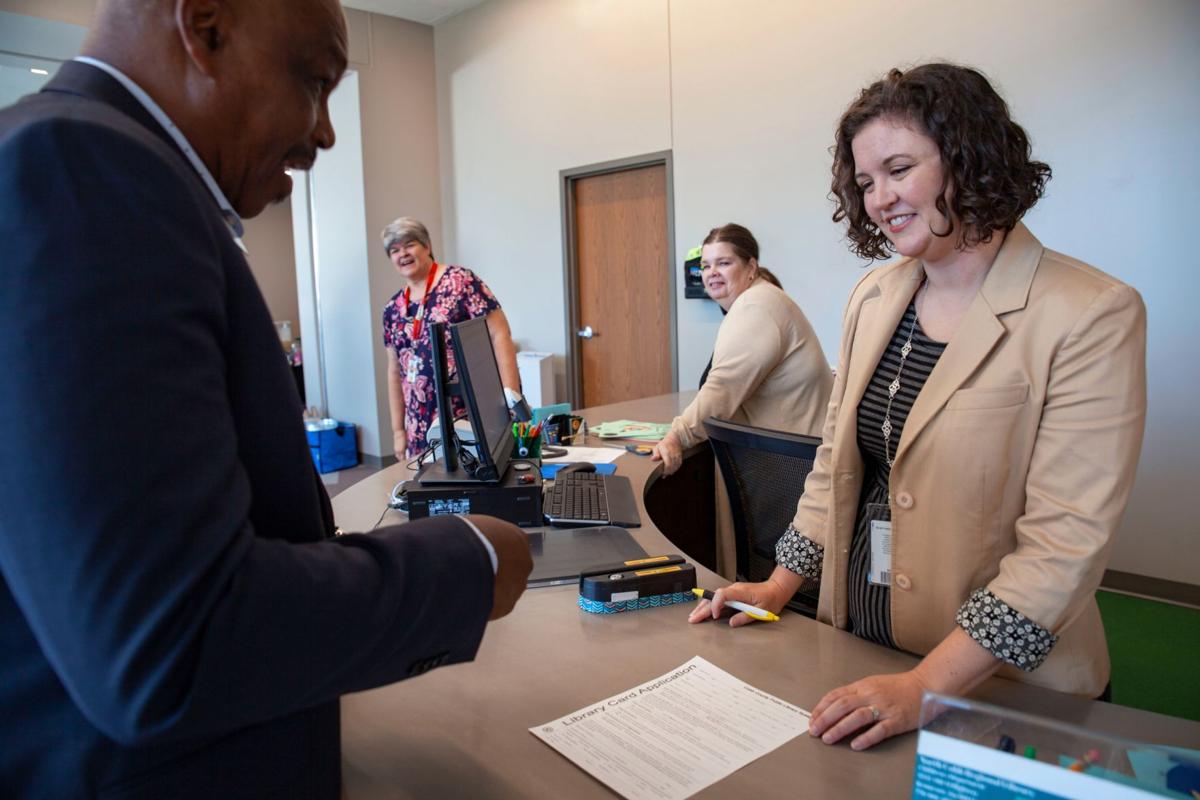 Nancy Maxwell, left, has gotten to know many in the Cobb Public Library System personally. The 89-year-old Acworth resident said she visited the Acworth library nearly every day for decades.

Helen Poyer, director of the Cobb County Public Library System, addresses the crowd at the ribbon-cutting on the new North Cobb Regional Library on Thursday.

Trinity Walker, a seventh grader at Awtrey Middle School, explores the teen room at the new North Cobb Regional Library on Thursday. Walker visited the library with 60 of her schoolmates.

Hundreds attended the grand opening and ribbon cutting ceremony at the new North Cobb Regional Library on Thursday. The library officially opened its doors to patrons on Tuesday.

KENNESAW — Nancy Maxwell has lived in Acworth her entire life, nearly nine decades, and some Cobb County Library System staff say she’s one of the first patrons of the Acworth Library.

Maxwell, who turns 89 in November, said she was born and raised steps away from the home where the Carrie Dyer Reading Club was established in 1898.

The reading club later became what many consider the first library in Acworth and merged with the Cobb County-Marietta Public Library System in 1963 after a new public library was built nearby, according to Cobb Landmarks.

And when a new Acworth Library opened in 1967, Maxwell said she lived across the street.

For decades, she visited the Acworth Library nearly every day, she said. In 1933 or 1934, when she would have been just a toddler, she said she’d walk over to the original library and peruse the shelves of books.

“I’d walk down to get my own books and just look at ‘em, and that’s how I learned to read,” Maxwell said, adding that as she grew, the library became a second home. “Even if I didn’t get a book, I’d just go and visit — just go in and say hey to ‘em at the desk. I knew ‘em all.”

Neely Simpson, youth services senior assistant for the Cobb County Public Library System, said other staff members introduced Maxwell to her when she started with the Acworth Library three years ago. Simpson said she and Maxwell became fast friends.

Maxwell would come in in the morning to read the paper or just pop in — sometimes multiple times in a day — to check on everyone, say hello or just share something she forgot to earlier in the day, Simpson said.

“We just had a really close relationship with her. She’s a really rich resource about the history of Acworth ... and she’s traveled around the world, so she’d tell us about her travels,” she said. “I think we all consider her a friend and not just a patron.”

Maxwell recalled fondly one Christmas that Simpson, who makes art out of the folded pages of books slated for recycling, walked a gift to her door.

“One day my doorbell rang, and I went to open the door and there was just a little Christmas bag sitting there. And there was this little snowman made out of a book with his little hat on and a little scarf,” she said. “She’s so talented.”

Maxwell sat in the front row under a tent just outside the new North Cobb Regional Library on Thursday afternoon as members of the Cobb County Board of Commissioners, mayors from Kennesaw and Acworth and library officials, among others, lauded the opening of the 25,000-square-foot, $8.6 million facility across the street from North Cobb High School.

The crowd stood as the high school’s Marine Corps Junior Reserve Officer Training Corps presented the nation’s colors and a men’s quartet from the school sang the “Star-Spangled Banner.” Sixty-one more students from Awtrey Middle School in Kennesaw stood listening patiently to the music and speakers while waiting for their chance to rush inside.

“I firmly believe that libraries remain the focal point of an educated and cultured society,” said Mike Boyce, chairman of the Cobb County Board of Commissioners. “I believe (North Cobb Regional Library) will be a cornerstone for a remarkable place that our children and our grandchildren will benefit from.”

Kennesaw Mayor Derek Easterling echoed the chairman. The new library, he said, is a bright light in the community and for future generations.

“That’s our future, ladies and gentlemen,” Easterling said, pointing from the podium at the crowd of middle schoolers. “That’s what this library is for.”

Acworth Mayor Tommy Allegood thanked the community for their approval of the 2016 Special Purpose Local Option Sales Tax that paid for the new library.

“This is a quality-of-life project paid for by the citizens of Cobb County by their support of SPLOST,” Allegood said. “This is what we invest in, and it is a great, great opportunity for us to celebrate this wonderful achievement, this new regional library.”

The new facility replaces both the Acworth Library, which stood on Dallas Street next to Acworth City Hall; and the Kennesaw Library at 2250 Lewis St., southwest of North Main Street in Kennesaw. The two libraries, built in the mid-1960s, closed their doors for good on July 13.

The 2,900-square-foot Acworth Library and the around 5,000-square-foot Kennesaw Library just weren’t cutting it for the region’s patrons, she said.

“Acworth had no community space, no study rooms. Kennesaw had a small space for people to gather. But this is a community center,” she said, gesturing to the interior of the North Cobb library, which was buzzing with activity.

Poyer said the regional library broke records the first day it welcomed patrons. The North Cobb library had the highest material circulation of any library in the system, as well as 63 new cardholders, she said.

“For both libraries, that’s a record,” Poyer said.

The new library at 3535 Old 41 Highway in Kennesaw offers interactive play areas and dedicated child and teen rooms, she said, as well as creative space, a community room, study rooms, an outdoor plaza for children and a drive-up book drop.

Maxwell sat in a chair near the children’s section after the ribbon-cutting ceremony Thursday as she watched all the commotion around her with a smile. With obvious admiration, library staff had quickly moved her to the comfortable seat and out of the heat. They brought her a plate of refreshments while she rested.

North Cobb Regional Library sits a couple miles, not steps, from Maxwell’s home. And while she said she’d miss the short walk to see her friends, even at 89, she won’t stop visiting.

“I’m still driving,” she said with a grin.