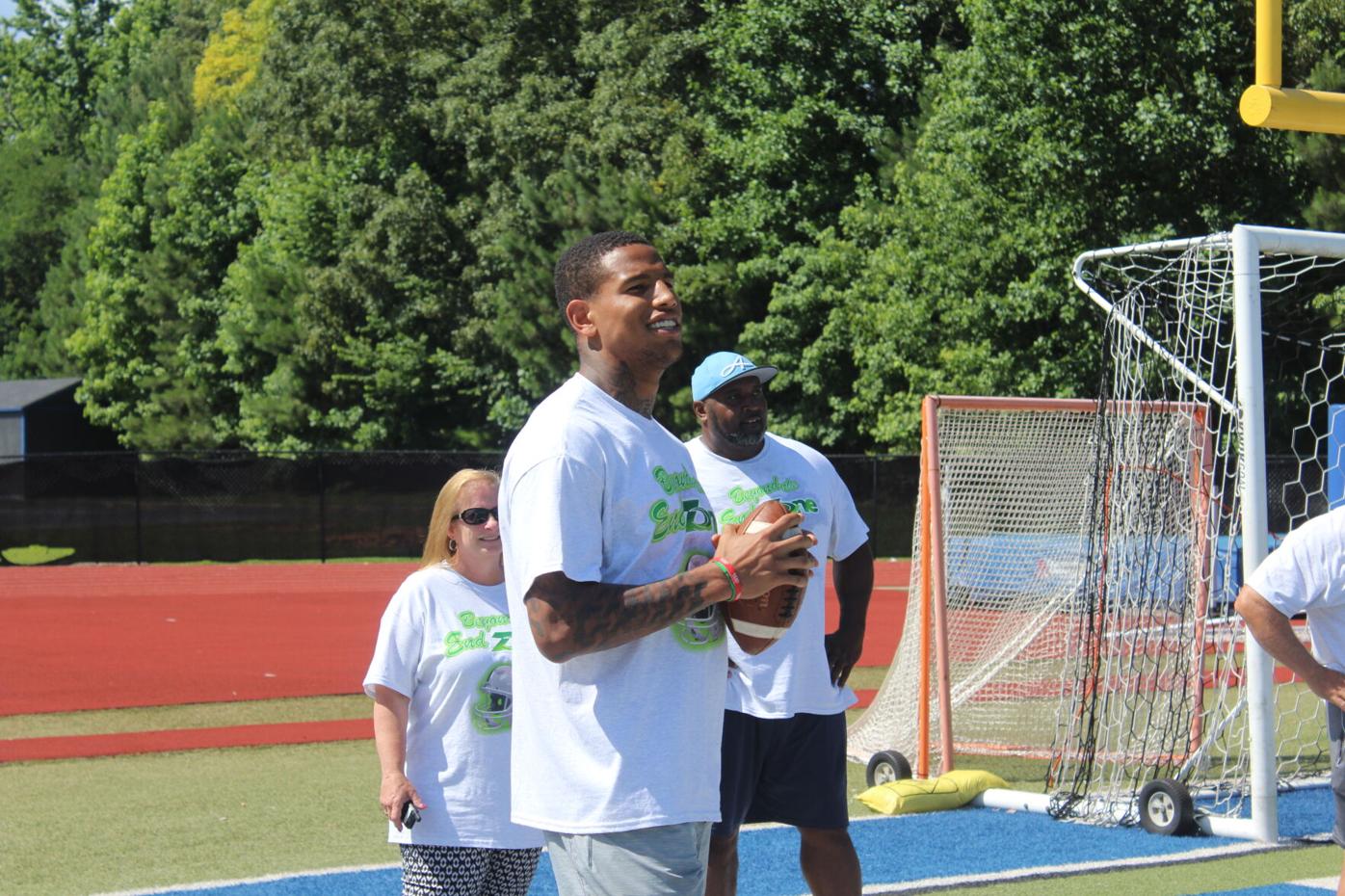 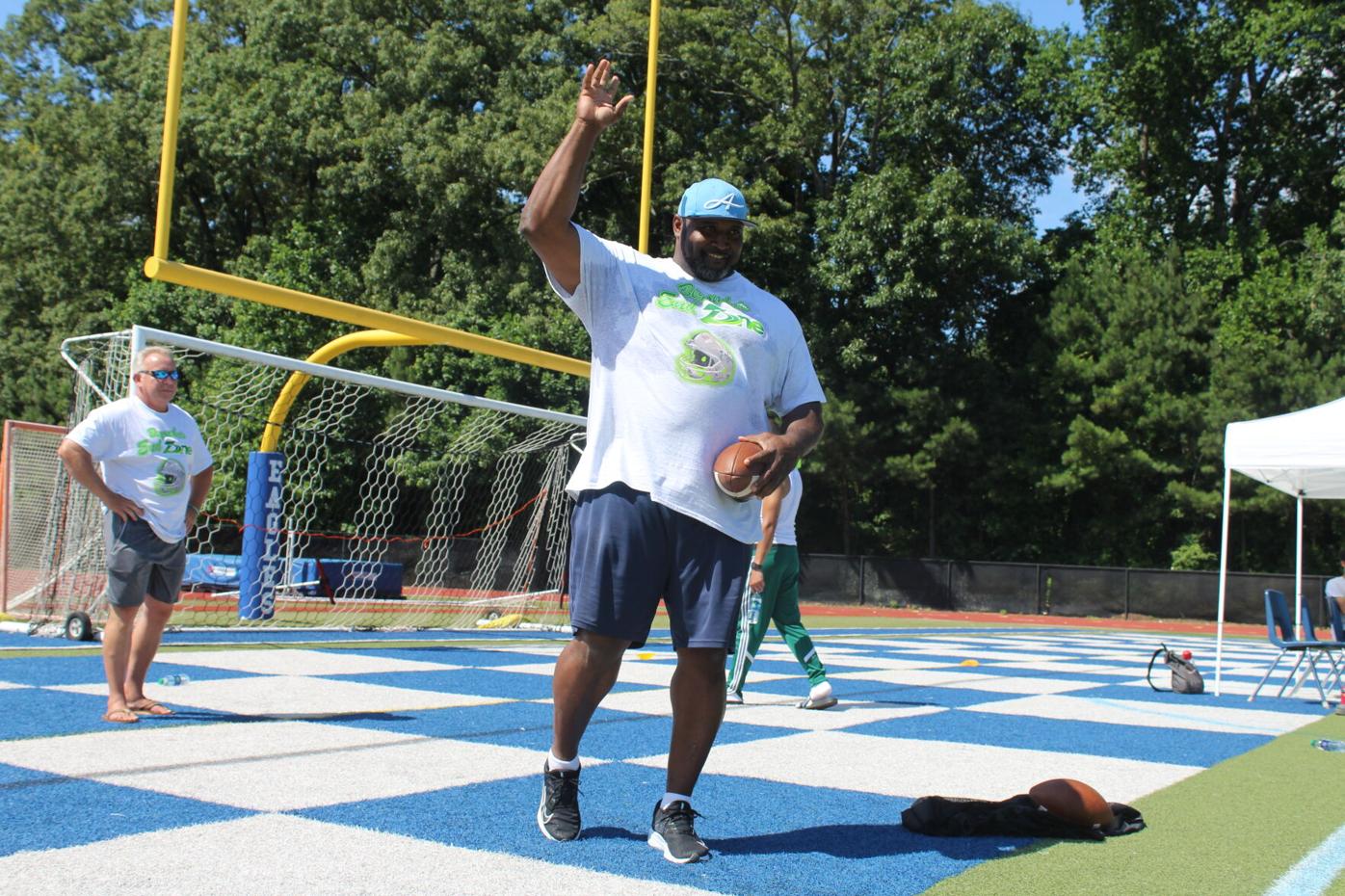 “I’m in recovery myself, man, so my passion and desire (is) to help people get sober,” former New England Patriots defensive lineman Brandon Mitchell said. 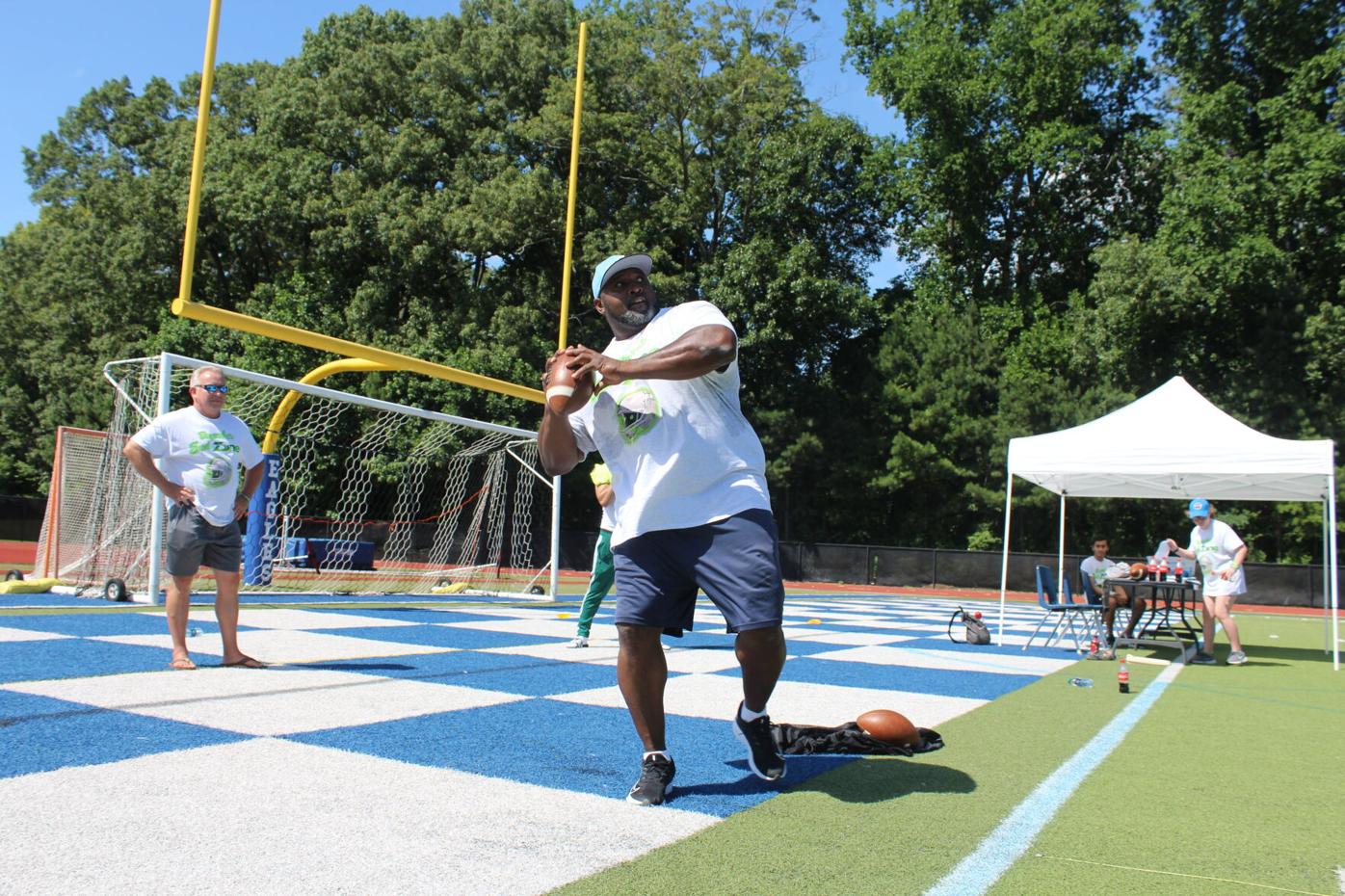 Former New England Patriots defensive lineman Brandon Mitchell winds up to toss a football at the Beyond the End Zone fundraiser Saturday. 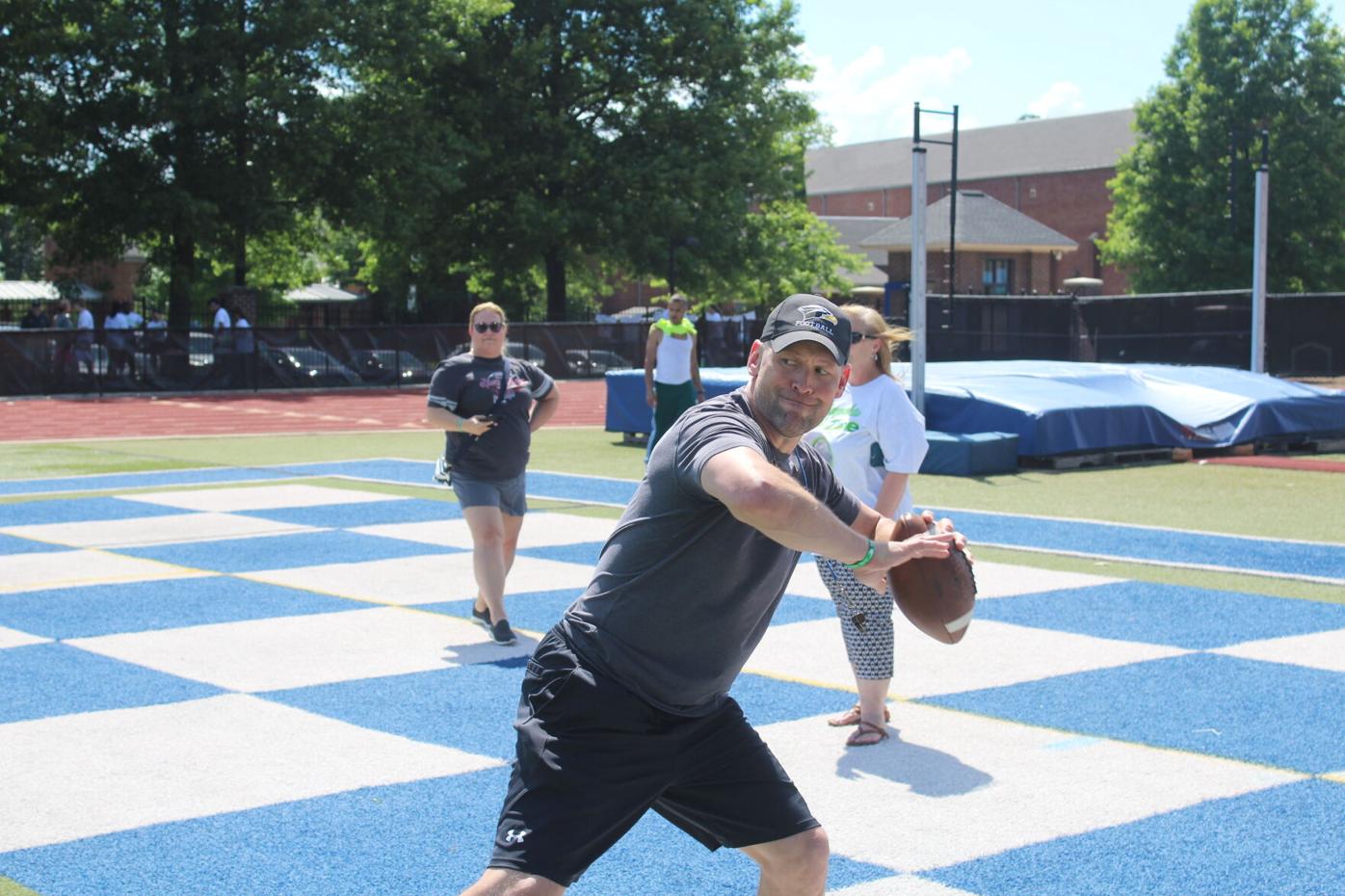 Mitch Jordan winds up to toss a football at the Beyond the End Zone fundraiser Saturday. 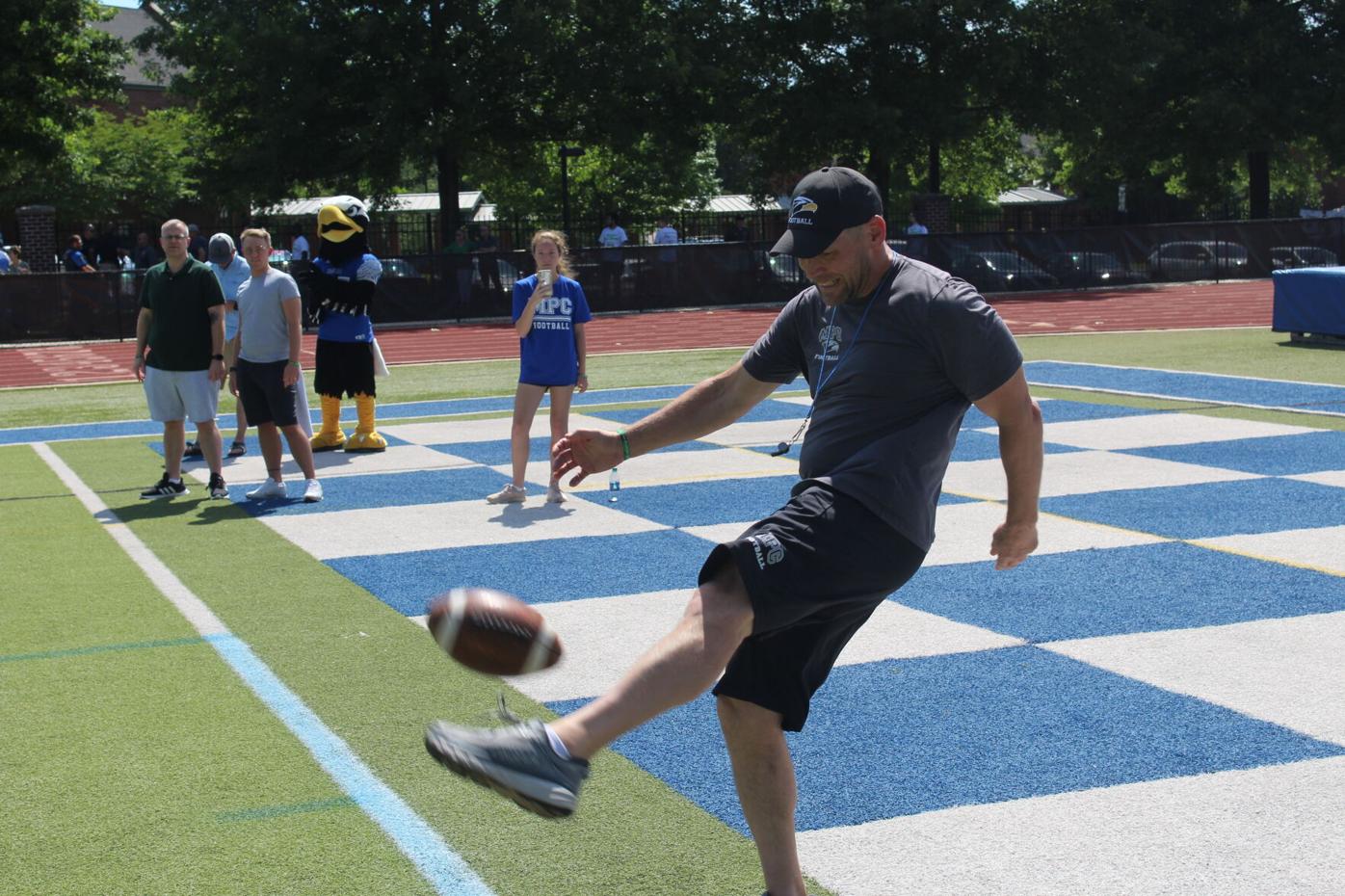 Mitch Jordan kicks a football at the Beyond the End Zone fundraiser Saturday.

“I’m in recovery myself, man, so my passion and desire (is) to help people get sober,” former New England Patriots defensive lineman Brandon Mitchell said.

Former New England Patriots defensive lineman Brandon Mitchell winds up to toss a football at the Beyond the End Zone fundraiser Saturday.

Mitch Jordan winds up to toss a football at the Beyond the End Zone fundraiser Saturday.

Mitch Jordan kicks a football at the Beyond the End Zone fundraiser Saturday.

KENNESAW — Darren Waller and Davis Owen had a couple things in common.

Both were standout high school athletes, and played baseball together growing up.

Waller’s talents in football took the Acworth native from North Cobb High School to Georgia Tech to the National Football League, where he now plays for the Las Vegas Raiders.

Owen, president of his junior and senior classes at Kennesaw Mountain High School, was a baseball player with the prestigious East Cobb Baseball program.

Both also developed an addiction to opiates. On March 4, 2014, Owen was found dead in his car from a suspected heroin overdose. Waller was suspended from the NFL for the 2017 season for violating the league’s substance abuse policy a second time, but he eventually kicked the habit.

So Waller jumped at the opportunity to boost the nonprofit founded in the wake of Owen’s overdose, the Davis Direction Foundation. On Saturday, Waller and former New England Patriots defensive lineman Brandon Mitchell were the star guests at the foundation’s inaugural Beyond the End Zone fundraiser.

Attendees gathered on the football field at Mount Paran Christian School to see who could throw or punt a football the farthest, and high school students signed a pledge to live a drug-free lifestyle. Waller and Mitchell were also set to talk about their journeys to sobriety at an evening dinner at the fundraiser’s conclusion.

The Davis Direction Foundation, founded by Owen’s mother, Missy Owen, operates The Zone, a 21,000-square-foot recovery facility on Fairground Street in Marietta. The inaugural issue of the foundation’s self-published magazine, the Recovery Zone, described the facility as a “country club of recovery,” a place where “you can broaden your social circles in a place that was guaranteed not to trip your triggers.”

“It’s become, literally, a safe haven for people where they know, if I go here, I’m not going to be judged,” Reynolds said.

“I haven’t had a football in my hand since probably 1972 when I was at the University of Kentucky,” Kirkpatrick said, “but if (Missy Owen) tells me to show up somewhere, I try to do it.”

Kirkpatrick said The Zone had proven so successful the General Assembly several years ago set aside some money for other municipalities within the state who wanted to copy it.

And the need is as great as ever, Kirkpatrick said.

“During the pandemic, people were more isolated, they weren’t doing their normal social interactions and weren’t reaching out to people,” Kirkpatrick said, “so everything got a lot worse during the pandemic.”

Mitchell and Waller said overcoming their addictions has given them a new lease on life, a message they take every opportunity to spread.

“I’m in recovery myself, man, so my passion and desire (is) to help people get sober,” said Mitchell, who shook his addictions following a 2008 arrest on multiple drug charges.

Waller said his message to kids goes beyond “don’t do drugs.”

“I was that kid, you told me not to do something, I was going to do it anyway,” he said, “so it’s more so, think about why you do everything that you do. … I’ve been (down) that route, I’ve done things that you may have been tempted to do, but it doesn’t work out, it doesn’t do what you think it’s going to do for you.”

Laredo man faces up to life in prison, $10M fine for smuggling meth in fire extinguishers

Marjorie Taylor Greene in Alabama: Do not force people to take COVID Vaccine

'It's holy ground.' These revival camp meetings have carried on in Gillsville for 175 years

Atlanta will switch to collecting yard trimmings every other week