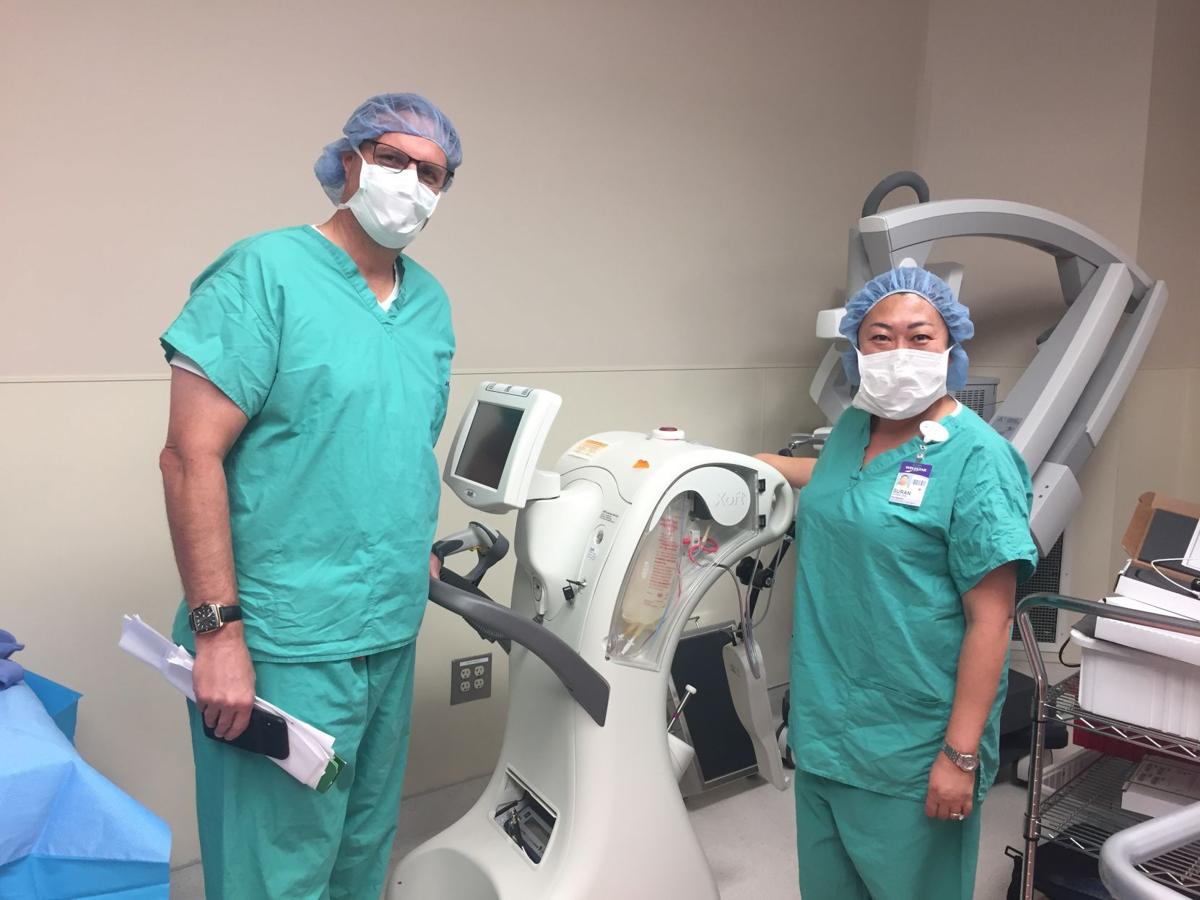 From left: WellStar’s Dr. Mark McLaughlin, a radiation oncologist, and Suran Chae, an oncology physicist, stand next to a machine used for intraoperative radiation therapy. 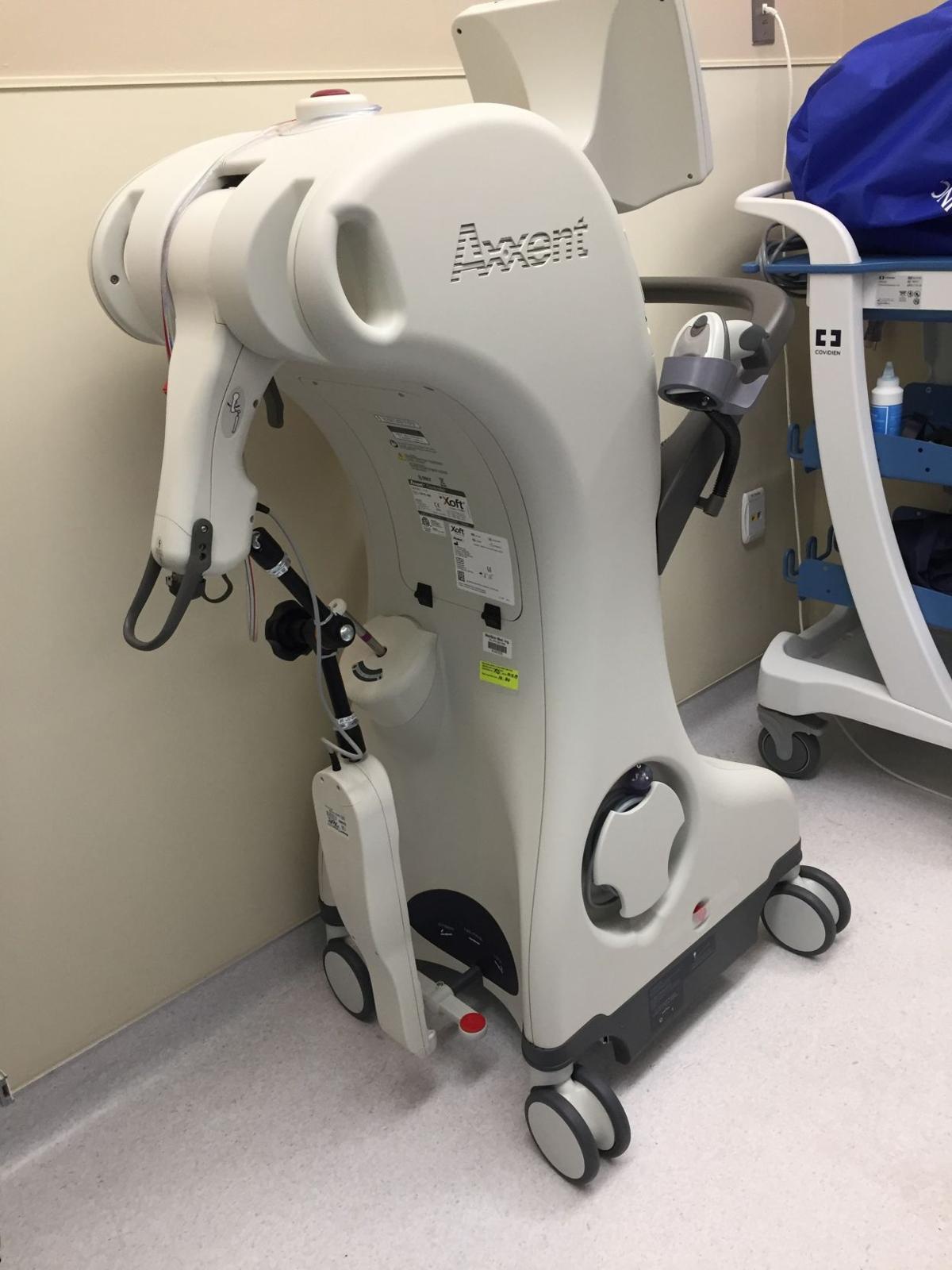 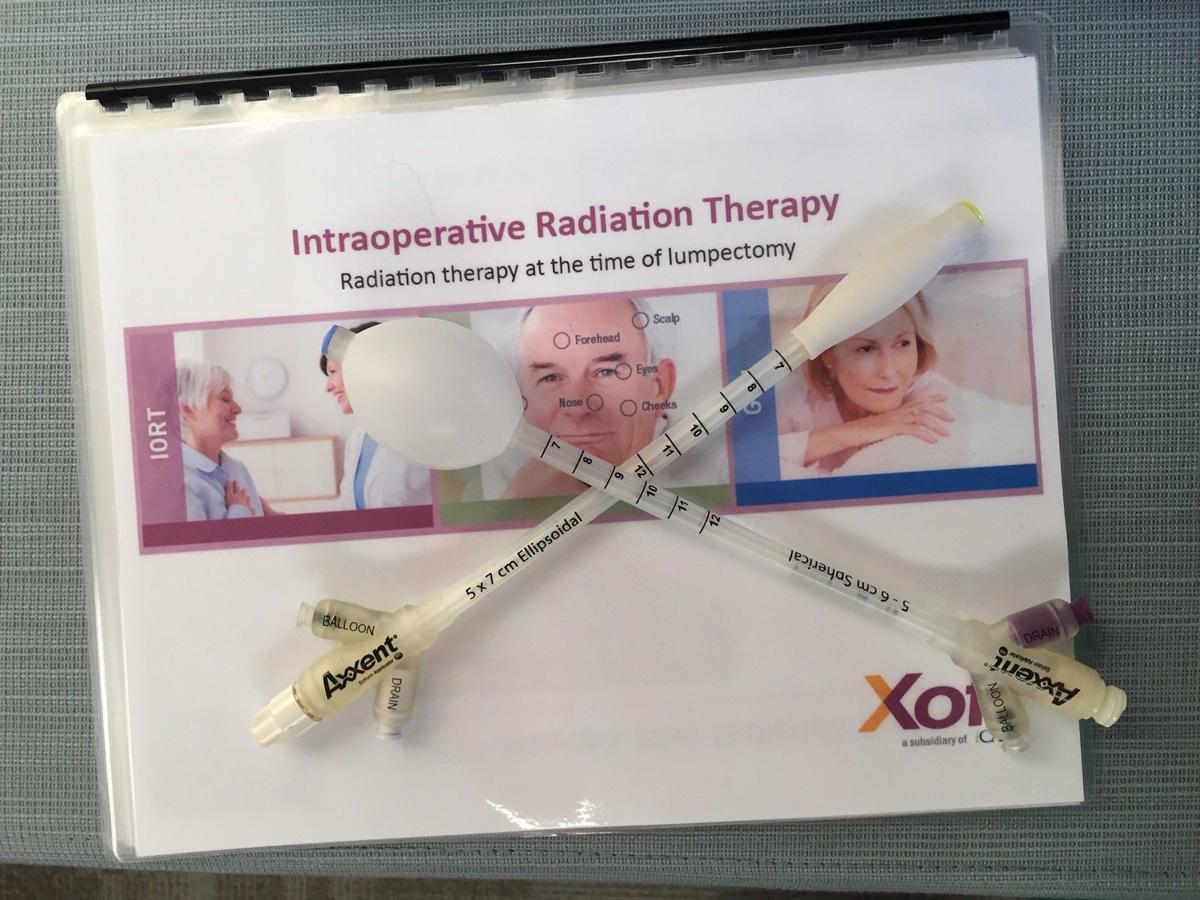 Intraoperative radiation therapy is a relatively new way to radiate breast tissue after a lumpectomy. Doctors place a small balloon inside the breast immediately after surgery and radiate the tissue from within.

From left: WellStar’s Dr. Mark McLaughlin, a radiation oncologist, and Suran Chae, an oncology physicist, stand next to a machine used for intraoperative radiation therapy.

Intraoperative radiation therapy is a relatively new way to radiate breast tissue after a lumpectomy. Doctors place a small balloon inside the breast immediately after surgery and radiate the tissue from within.

Nan Harman-Dempsey, an attorney with a practice in Alpharetta, had to be persuaded to take a mammogram.

“Do it for me,” pleaded her doctor, Robert Young with North Fulton Internal Medicine Group.

It was her first in eight years. When the checkup was complete, “they took the film and they said we’ll see you next year,” she recalled.

But Harman-Dempsey got a call shortly thereafter, saying she needed to come in for more tests. She was eventually diagnosed with stage 0 breast cancer — meaning it was still contained to its area of origin — and was talking with specialists at WellStar North Fulton Hospital about her next steps.

They recommended surgery followed by intraoperative radiation therapy, or IORT. WellStar breast surgeon Laura Pearson called it “a natural evolution of the radiation portion of (cancer) treatment,” and the hope is that the relatively new technology can dramatically reduce the cost of administering radiation to those diagnosed with early stage breast cancer.

“They were really excited about it,” Harman-Dempsey said. “The only thing I knew was it was a delivery system for the radiation.”

Patients typically have two options when it comes to removing a breast cancer tumor, said Pearson, the surgeon who treated Harman-Dempsey: a mastectomy, in which the entire breast is removed, or a lumpectomy, in which only the tumor is removed. The latter procedure is almost always followed by radiation to kill any remaining cancerous cells that might have been missed by the surgery to ensure the cancer never returns.

Dr. Mark McLaughlin, a radiologist at WellStar, said the goal of IORT is simply to be as good as other radiation treatments at killing cancer cells. The real benefit to patients, he said, is in the time and money it saves them.

Before IORT, there were two ways to administer radiation after breast cancer surgery, both of them time-intensive.

One was “external whole breast radiation,” in which the entire breast is radiated five days per week for as many as six weeks.

The other was “partial breast radiation” where a catheter or a device is placed inside the breast to radiate the tissue from within. It delivers 10 doses over five days.

IORT works using the same principle of providing radiation from the inside of the breast. But only one dose is required, and it’s given immediately after the lumpectomy, before the patient ever leaves the hospital.

In McLaughlin’s estimate, IORT could cost a quarter of standard radiation therapy. But it isn’t for everybody.

Patients with large tumors aren’t candidates for IORT, given the much larger risk of recurrence, Pearson said. In those cases, doctors are more likely to recommend whole breast radiation. And IORT provides a “very large dose of radiation in a smallish space,” she added, which makes it a bad idea for those with small breasts or a tumor too close to skin, which can be damaged by radiation therapy.

“Even though this is a good treatment approach, it’s not good for everybody,” McLaughlin said. “We’re really choosing our patients wisely.”

IORT was given to patients on a trial basis for the past two years, McLaughlin said. During that period, 15 patients received the treatment. In October, the hospital made it commercially available, and, to date, six more people have been treated.

In Cobb County, WellStar’s Mobile Intraoperative Radiation Therapy System is only available at its Kennestone and North Fulton hospitals.

The only other hospital in Georgia offering IORT that Pearson and McLaughlin know of is in Newnan. WellStar plans to offer the treatment at its other hospitals, they added, but there is no timetable as to when that will happen or at which hospitals.

Despite her diagnosis, Harman-Dempsey said she was never afraid.

“I should be afraid, I should be scared because I know people who got the bad news and it turned out to be bad,” she said.

She went into surgery Oct. 17.

“So next thing I know I wake up and I’m in a little room and the doctor comes in with a smile on her face and she says, ‘I think we got it all.’”

Harman-Dempsey said the experience was painless and she has felt fine since. And her insurer, Blue Cross and Blue Shield, covered the entire cost of her treatment.

Nevertheless, for someone who was otherwise “healthy as a horse,” she said her cancer diagnosis “was an eye-opener, too, (on) how fast things can change.”

Union City police are investigating a shooting that injured an infant and man near a motel.

MARIETTA — After a longer-than-anticipated labor and an arrival three days before his due date, baby Luke, born at 12:44 a.m. at WellStar Kenn…

Have you seen these car theft suspects? If so, call the Atlanta Police