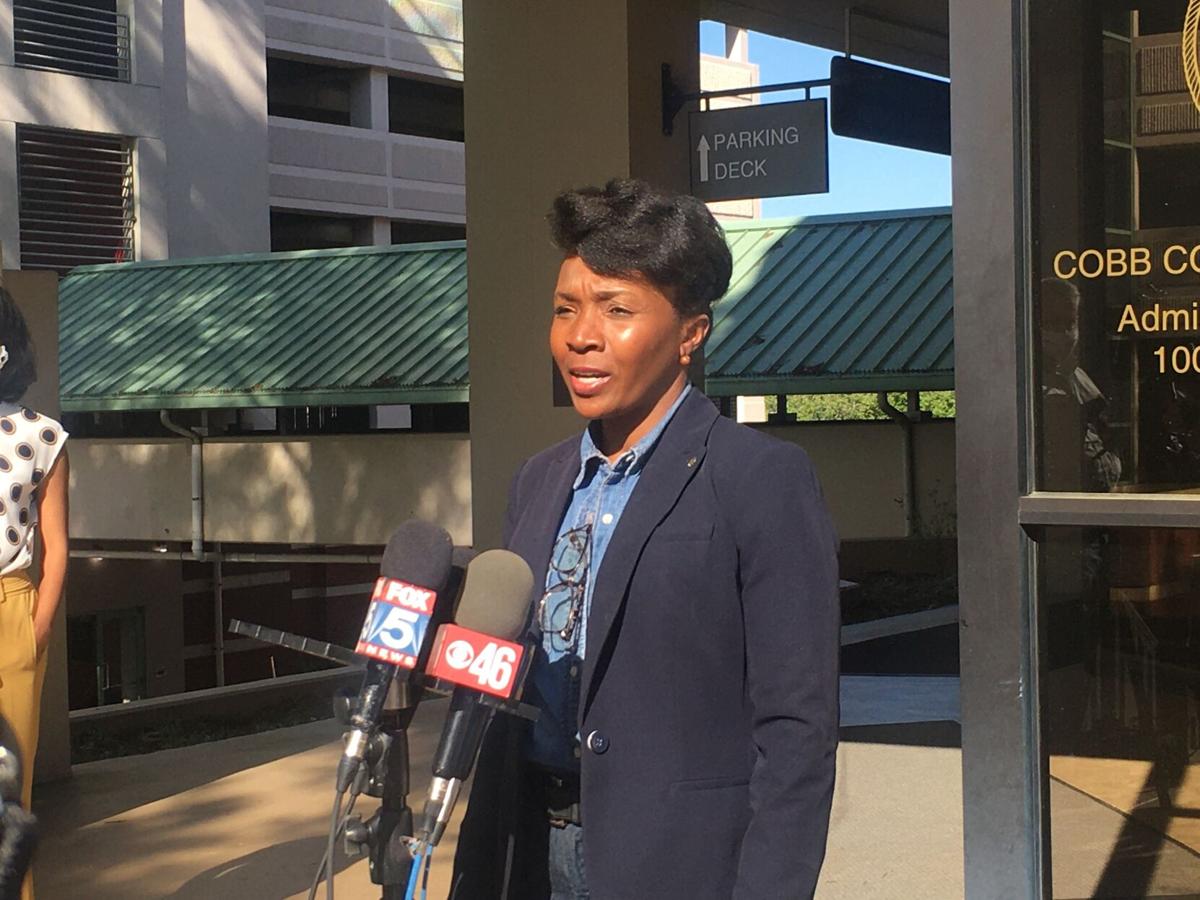 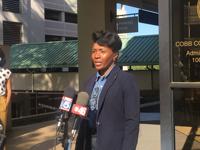 At a news conference Friday afternoon, Cobb Chairwoman Lisa Cupid said the pulling of the All-Star Game was disheartening, but not entirely surprising. Cupid spent much of the last week lobbying to keep the game in Cobb. 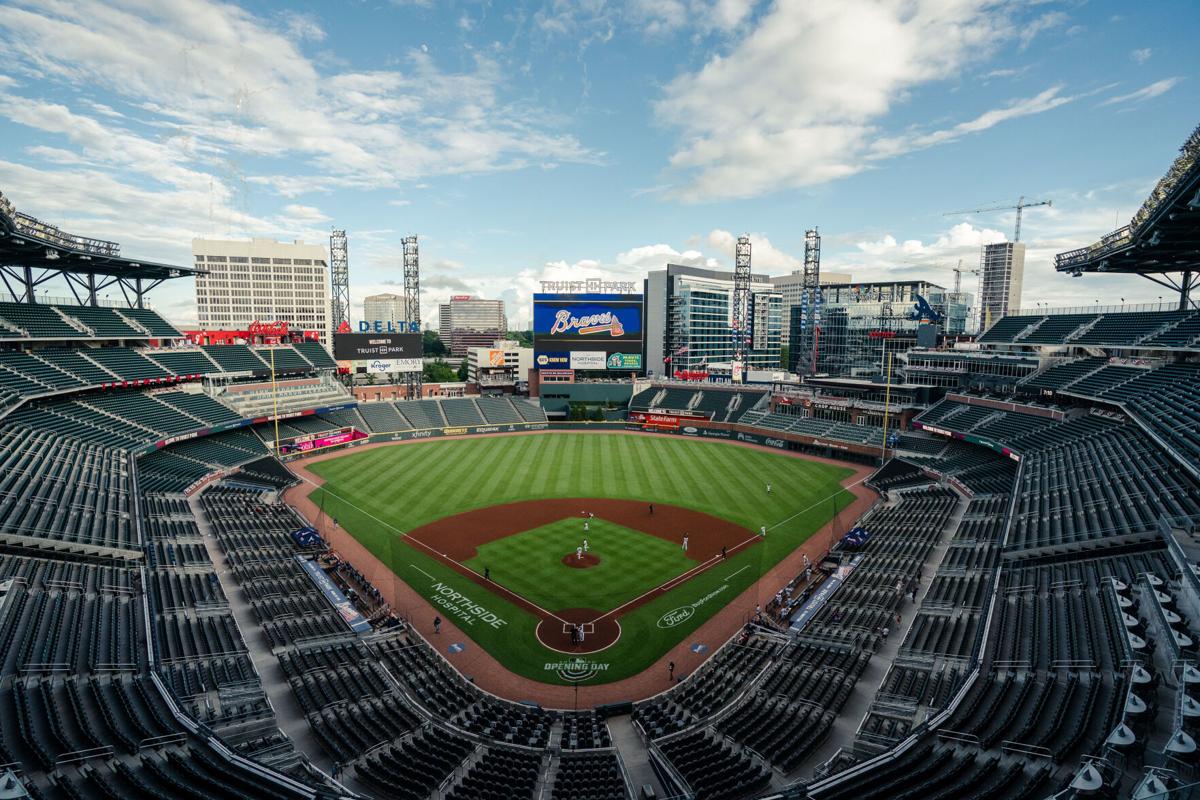 Cobb commissioners set aside $2 million for security and transit expenses for the 2021 MLB All-Star Game, hosted at Truist Park. The MLB announced Friday it would move the game in protest of Georgia's overhaul of its elections laws.

At a news conference Friday afternoon, Cobb Chairwoman Lisa Cupid said the pulling of the All-Star Game was disheartening, but not entirely surprising. Cupid spent much of the last week lobbying to keep the game in Cobb.

Cobb commissioners set aside $2 million for security and transit expenses for the 2021 MLB All-Star Game, hosted at Truist Park. The MLB announced Friday it would move the game in protest of Georgia's overhaul of its elections laws.

MARIETTA — Major League Baseball has pulled the 2021 All-Star Game from Cobb County, a bombshell announcement Friday afternoon that capped off a week of mounting backlash to the passage of Georgia’s new omnibus elections law.

The Midsummer Classic, as the game is known, was originally scheduled to be played July 13 in Truist Park, home of the Atlanta Braves, with related activities and events taking place between July 7 and July 14 throughout Cumberland. Cobb officials had hoped the game would not only showcase the new stadium but the county itself.

“We’re aiming to sing our best song,” east Cobb Commissioner Jerica Richardson said in March, “and it’s really a chance for us to highlight, honestly, what’s incredible about Cobb County.”

In a prepared statement, Robert Manfred Jr., the MLB’s baseball commissioner, said moving the All-Star Game and league draft from Georgia would be “the best way to demonstrate our values as a sport.”

“Major League Baseball fundamentally supports voting rights for all Americans and opposes restrictions to the ballot box,” he wrote.

“In 2020 … we proudly used our platform to encourage baseball fans and communities throughout our country to perform their civic duty and actively participate in the voting process. Fair access to voting continues to have our game’s unwavering support.”

At a news conference Friday afternoon, Lisa Cupid, chairwoman of the Cobb County Board of Commissioners, said the news was disheartening, but she wasn’t completely surprised.

“We’re disappointed, but wanted to see how we could take the energy and concern of the Players Association, and channel that into something positive and constructive for us,” Cupid said.

The chairwoman said the commission will work to recoup the $2 million transportation and security expenditure recently approved by commissioners. But some expenses which were part of that package – such as a real-time crime center–could still be on the table, given their utility beyond the game.

The league’s decision to relocate the All-Star Game from Truist Park in Cobb County follows corporate criticism of the law by Atlanta-based companies, primarily Delta Air Lines and Coca-Cola.

The Republican-controlled legislature passed the voting bill along party lines on the afternoon of March 25, and Gov. Brian Kemp signed it into law later that day.

The sweeping measure overhauls the absentee voting process and early voting in Georgia. It replaces the current signature-match method for verifying absentee ballots with a requirement that absentee voters provide a driver’s license number or one of several other forms of identification.

The law expands opportunities for early voting on weekends, a provision Kemp and other Republicans have pointed to in arguing the legislation is not aimed at restricting voting access.

The provision that has drawn the strongest criticism prohibits people who aren’t poll workers from handing out food and drink to voters waiting in line outside polling places. Republicans have said the provision is intended to prevent illegal electioneering by candidates or campaign workers within 150 feet of the polls.

The threats over moving the Midsummer Classic began last Friday, when MLB Players Association Director Tony Clark told the Boston Globe he “would look forward to” discussing the matter in the aftermath of the signing of Georgia’s elections bill.

“I think today’s professional athletes are acting incredibly responsibly,” Biden said. “I would strongly support them doing that … the very people who are victimized the most are the people who are the leaders in these various sports. And it’s just not right.”

“While we are both frustrated by the recently-enacted elections legislation,” Cupid said in a statement earlier this week, “the President’s remarks concerning moving Major League Baseball’s All-Star Game out of Cobb County sends an unfortunate message to those residents and businesses here who have supported him.

“I would be open to a discussion with the President and others about alternative actions that would channel our frustration into an opportunity to use this event as a chance to openly discuss this legislation, voter participation, and inclusion and then find an applicable response.”

Cupid met Wednesday night with Clark, urging him to reconsider.

The chairwoman described the conversation as “positive” on Thursday, saying “the doors of communication are open” between the county and the Players Association, but declined to share any further details. County spokesman Ross Cavitt noted the talk was a lengthy one.

The MLB canceled last year’s All-Star Game due to the coronavirus. It was the first time since World War II the game was not played.

“We believe it’s the first, probably, global event that will take place in North America that will have full-capacity crowds,” Braves Development Company CEO Mike Plant told the county’s governing board in March.

The Braves have laid out an ambitious reopening schedule that would have them open all 41,084 seats at Truist Park come June.

“Georgians – and all Americans – should fully understand what the MLB’s knee-jerk decision means: Cancel culture and woke political activists are coming for every aspect of your life, sports included. If the left doesn’t agree with you, facts and truth do not matter.”

Both Kemp and Georgia House Speaker David Ralston attributed baseball’s decision to lies from Abrams about the new law.

“This decision is not only economically harmful,” said Ralston, R-Blue Ridge. “It also robs Georgians of a special celebration of our national pastime free of politics.”

In a news release, the Atlanta Braves wrote that businesses, stadium employees and baseball fans will all be hurt by the decision.

“The Braves organization will continue to stress the importance of equal voting opportunities, and we had hoped our city could use this event as a platform to enhance the discussion,” the release stated. “Our city has always been known as a uniter in divided times, and we will miss the opportunity to address issues that are important to our community.”

Cupid said Friday she had spoken with Plant about the game, but declined to share details of the conversation. Plant did not immediately respond to a request for comment.

The new voting law has drawn the largest national outcry against Georgia since the General Assembly passed religious freedom legislation in 2016 that critics slammed as discriminatory. It drew boycott threats from local and national businesses, including the film industry, and then-Gov. Nathan Deal vetoed it.

Manfred said Major League Baseball still plans to celebrate the memory of Braves Hall of Fame slugger Hank Aaron, who died in February, as part of the All-Star Game festivities.

A decision has not been made on a new host city for the game. The LA Dodgers will host the 2022 All-Star Game.

MARIETTA — Gov. Brian Kemp continued his media blitz Saturday with an appearance at AJ’s Famous Seafood and PoBoys, where he blamed Democrats …

Amazing how a group of overpaid athletes who won’t stand for the flag, think they can tell the country what to do. Read the liberal New York post article, shows no suppression. Now it won’t allow deceased to vote, and you have to show I’d that you are who say. Biden just what his handlers tell him. This entire thing is ridiculous.

I understand your comments regarding professional ball players including baseball, football and basketball. I will not watch any professional sports again, they are dead to me.

The lies the Democrats have spread about the new election laws have now come back to hurt their very own constituents who stood to make a financial gain from the MLB events. To what length will they go to further hurt our country?

Sanford Bishop: I regret that Washington has become so partisan