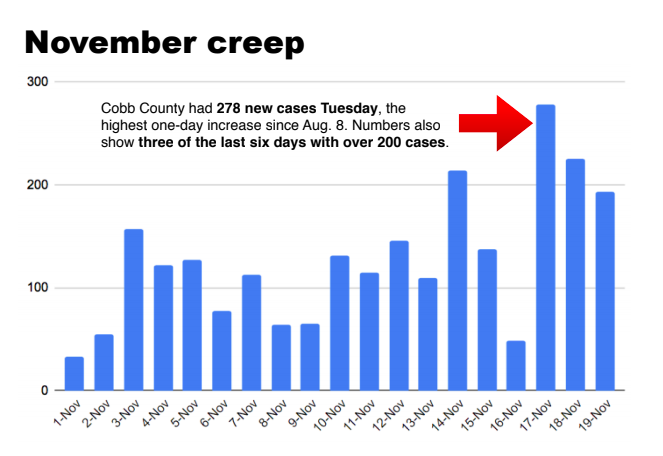 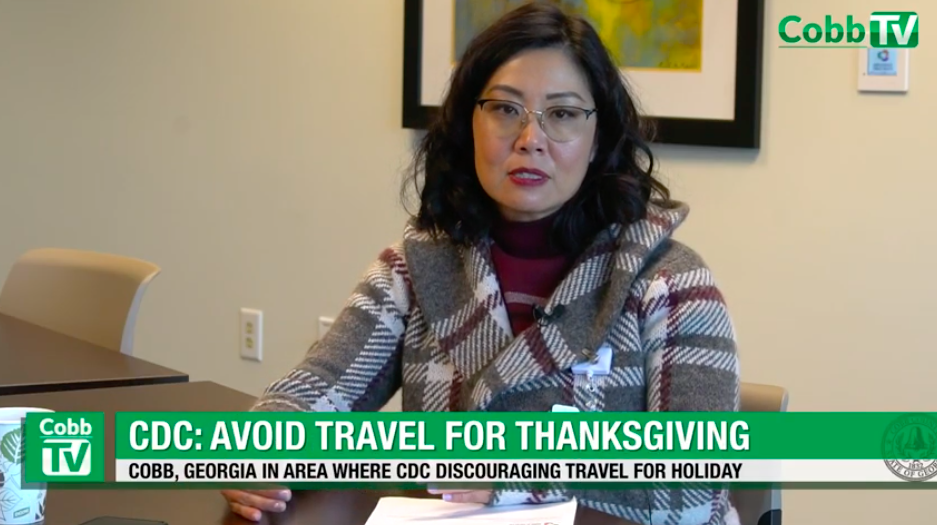 “Really we should try our best not to go out and do too many things that are not essential at this point,” Dr. Janet Memark, director of Cobb-Douglas Public Health, said in a video the county shared Friday.

“Really we should try our best not to go out and do too many things that are not essential at this point,” Dr. Janet Memark, director of Cobb-Douglas Public Health, said in a video the county shared Friday.

“We have critically low critical care beds at this point, probably one available in the county,” Dr. Janet Memark said in a recorded interview the county posted to its social media pages Friday morning. “Remember previously I’d said … the hospitals were busy and they weren’t all COVID patients? Well, we’re seeing more and more COVID patients that are being admitted.”

This week, the Centers for Disease Control and Prevention recommended people not travel for Thanksgiving so as not to spread or contract the coronavirus, something Memark seconded Friday.

The seven-day average of new cases was climbing in every state in the U.S. on Sunday, a shift from earlier waves of the pandemic when rates ebbed in some regions and leaped in others, according to Bloomberg News.

The financial news outlet reported Sunday around 200,000 new cases are confirmed daily. A month ago, there were about 8 million cases in all. On Oct. 31, the count hit more than 9 million. Last week, it surpassed 10 million.

Cases in Cobb and Georgia peaked over the summer.

On some days in early July, almost 6,000 Georgians and 400 Cobb residents tested positive for the coronavirus, according to the state’s COVID-19 dashboard. By the beginning of September, new daily cases averaged around 3,000 in the state and 100 in the county; by the beginning of October, fewer than 1,000 Georgians and around 50 Cobb residents were testing positive most days.

On Thursday, more than 2,700 people in Georgia and almost 200 in Cobb tested positive.

Cobb had 278 new cases Tuesday, the highest single-day increase since Aug. 8. More than 200 county residents have tested positive in three of the last six days.

“Really we should try our best not to go out and do too many things that are not essential at this point,” Memark said.

Much of the transmission now is coming from small gatherings such as dinner parties, sleepovers, birthday parties and small weddings.

A vaccine should be available for people who are at highest risk of catching the virus or dying from it, such as hospital workers, first responders, nursing home residents, elderly people with chronic medical conditions and essential workers, Memark said. Not until spring of 2021 would a vaccine be available to the general public, she added.

“Please, do not go to work or send your children to school sick,” she pleaded toward the end of the video. “That is happening way too often, and it is going to be a major problem for everybody.”

Cobb County Schools reported 106 new cases of the coronavirus in the district this week.

What Florida Democrats have to learn from Stacey Abrams

Man, 19, back in jail over park shooting incident