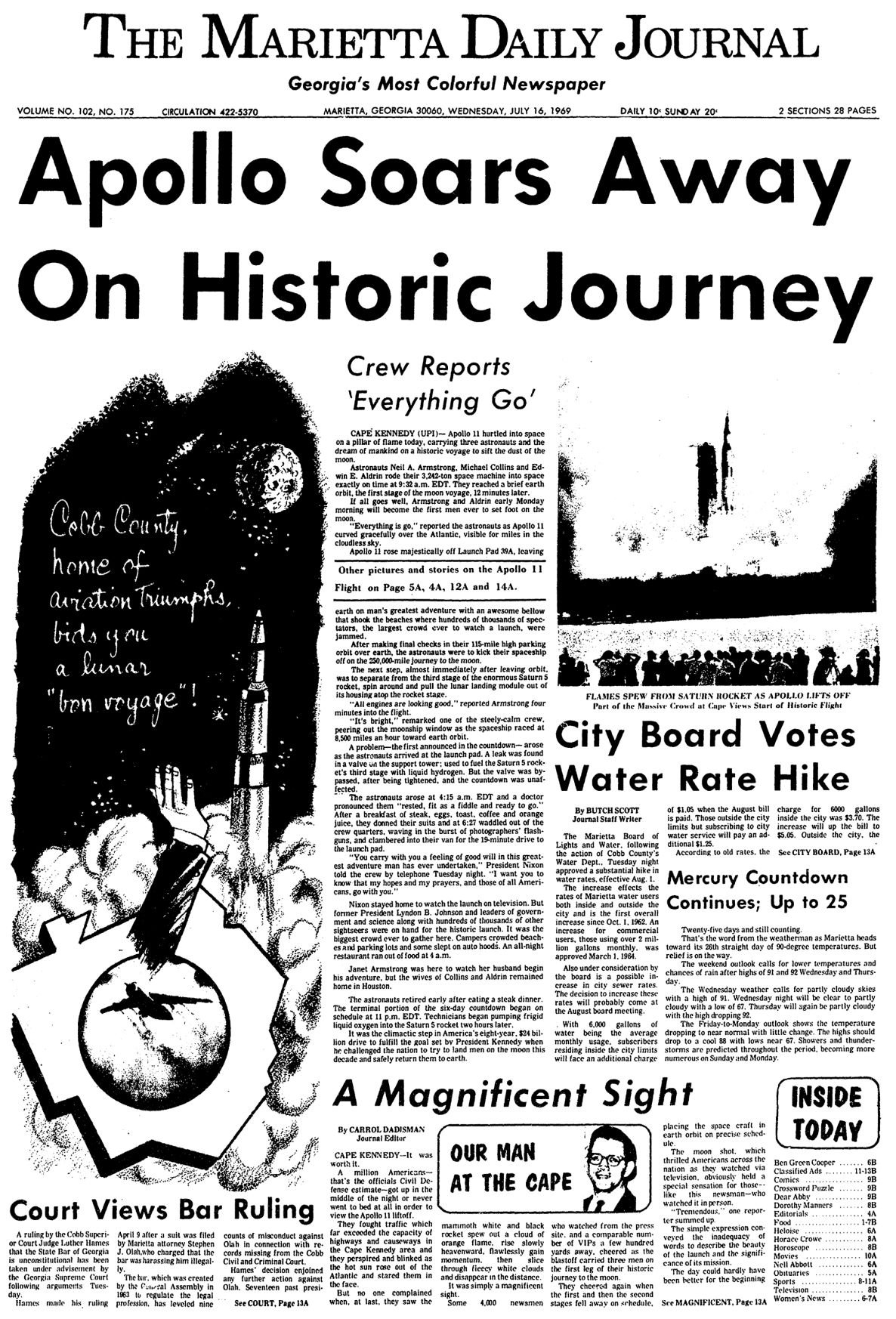 The front page of the afternoon edition of the Wednesday, July 16, 1969, Marietta Daily Journal covering that morning’s historic Apollo 11 rocket launch is seen. 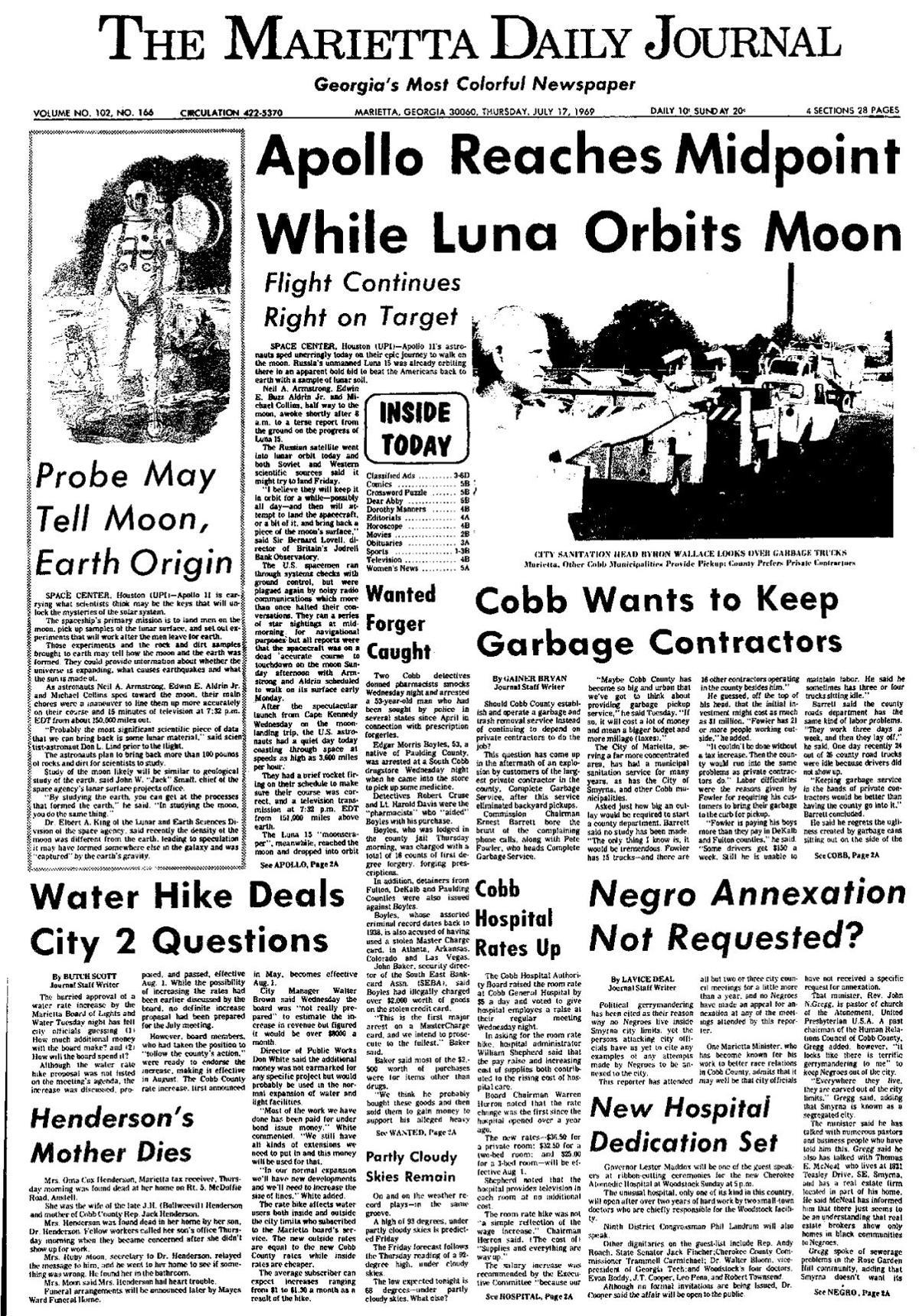 This is the front page of the Thursday, July 17, 1969, Marietta Daily Journal, announcing that Apollo 11 had reached the midpoint in its journey to the moon.

The column graphic that ran each day with Marietta Daily Journal editor J. Carrol Dadisman’s columns from Cape Kennedy leading up to the historic Apollo 11 launch is seen.

The front page of the afternoon edition of the Wednesday, July 16, 1969, Marietta Daily Journal covering that morning’s historic Apollo 11 rocket launch is seen.

This is the front page of the Thursday, July 17, 1969, Marietta Daily Journal, announcing that Apollo 11 had reached the midpoint in its journey to the moon.

The column graphic that ran each day with Marietta Daily Journal editor J. Carrol Dadisman’s columns from Cape Kennedy leading up to the historic Apollo 11 launch is seen.

Fifty years ago, the nation sat in anticipation of the Wednesday, July 16, 1969, launch of the historic Apollo 11 mission to the moon.

Moon fever gripped the country from coast to coast as astronauts Neil Armstrong, Edwin Aldrin and Mike Collins prepared to embark on their dangerous flight from the terrestrial beaches of Florida out into the great expanse of space for our world’s closest neighbor.

Marietta Daily Journal editor J. Carrol Dadisman spent a week down at Cape Kennedy bringing on-the-scene reports, titled “Our Man At The Cape,” to Cobb County of the pre-launch preparation and the actual launch. Cape Kennedy was the closest that people could get to witnessing the launch.

On Monday, July 14, 1969, Dadisman said, “this strip of sand between the Atlantic Ocean and the Banana River seems an unlikely setting for the biggest story of the 20th Century.” He described the area as normally being “the land of the care-free vacationer” and “hardly the spot one would expect to find men preparing to launch out on the most historic, most daring mission in history.”

According to Dadisman, “the big pilgrimage” to the Cape began the week before and “had mushroomed rapidly.”

Early estimates on the number to view the launch were between 1 to 2 million people.

Dadisman reported that two months earlier “it was impossible to get a motel room or apartment in the cities closest to the space center — Cocoa, Cocoa Beach, Titusville and Cape Canaveral.” On that Monday, “virtually everything is booked solid within 75 miles” and rental cars were taken at all the companies as far away as Orlando, Daytona Beach and Lakeland.

Several gas stations operating along major highways in the area were reporting that they were running nearly dry on fuel.

Dadisman said in the Tuesday, July 15, 1969, paper that the Apollo press center was looking like Grand Central Station with all of the numerous newsmen checking in from parts across the world.

He also stated that the problem of moving over 3,000 accredited press personnel and a VIP list that included Congressmen, NASA officials and others to the prime viewing site was “producing ulcers among the logistics personnel.” All available buses within miles had been called into service for the event.

The Fernbank Science Center’s 36-inch reflector telescope, the largest in the Southeast, was reported in the Saturday, July 13, 1969, paper as having been “coupled directly to a sensitive television camera and recording equipment to view the Apollo 11 craft during various stages of its mission.”

NBC outlets in Georgia and across the nation carried live telecasts, with Fernbank astronomer Dr. Paul Knappenberger serving as commentator. One of the highlights of the telecasts was expected to be the telescope picking up Apollo 11 on camera as the craft flew over Georgia.

In the afternoon edition of the Tuesday, July 16, 1969, paper at Cape Kennedy, Dadisman wrote: “It was worth it.”

Dadisman quoted the Civil Defense’s estimate that one million Americans “got up in the middle of the night or never went to bed at all in order to view the Apollo 11 liftoff.”

Launch viewers fought traffic that “far exceeded the capacity of highways and causeways” and “they perspired and blinked as the hot sun rose out of the Atlantic and stared them in the face.”

“But, no one complained,” Dadisman said, when they saw “the mammoth white and black rocket spew out a cloud of orange flame, rise slowly heavenward, flawlessly gain momentum, then slice through fleecy white clouds and disappear in the distance.”

For Dadisman it was “simply a magnificent sight” and “a morning to inspire human awe and national pride.”

The launch was witnessed by Dadisman and nearly 4,000 newsmen from the press site. A few hundred yards away, VIPs also cheered as the rocket blasted off. Before both groups sat an American flag, in direct line with the launch pad, waving in a light breeze.

Another story in that Tuesday’s paper reported how many American citizens were not aware that NASA did not have a rescue plan should the Apollo 11 spacecraft fail and leave the astronauts stranded in orbit or on the moon.

Journal staff writer Butch Scott collected opinions of several residents on the issue. Below are just a few of the comments.

Mrs. William E. Nicholson, a Marietta secretary, said: “Columbus didn’t have anyone to rescue him either, yet he went ahead. We’ve got more behind us than he did. At least our scientists know what’s out there. I don’t think we should send them though if we know something could happen and we can’t bring them back.”

V.L. McWhorter, a Smyrna meat cutter, said: “I don’t think we should send them without a way to get them back. As scientists progress in outer space, they should progress in methods of eliminating the dangers as much as possible. They should look at both sides of it and do something in conjunction to give the astronauts a better chance of survival. As progress is made, they should be working on a rescue plan.”

Sherman Brooks, a Marietta Auto & Truck employee, said: “I think they should spend the money on all the hungry children instead of shooting it out in space. If they would have wanted us to be on the moon, we’d have been there to start with.”

A Voyage for the Ages

Editor’s Note: Below is the editorial that the Journal ran on Tuesday, July 15, 1969, the day before the launch of the Apollo 11 mission.

Editor’s Note: Below is the editorial that the Journal ran in the afternoon edition of the Wednesday, July 16, 1969, paper following the launc…

Editor’s Note: The Journal ran a story, titled “Stage Moon Watch For Lunar Landing,” in the afternoon edition of the Wednesday, July 16, 1969,…