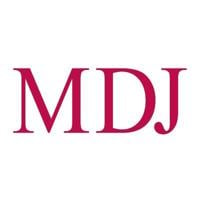 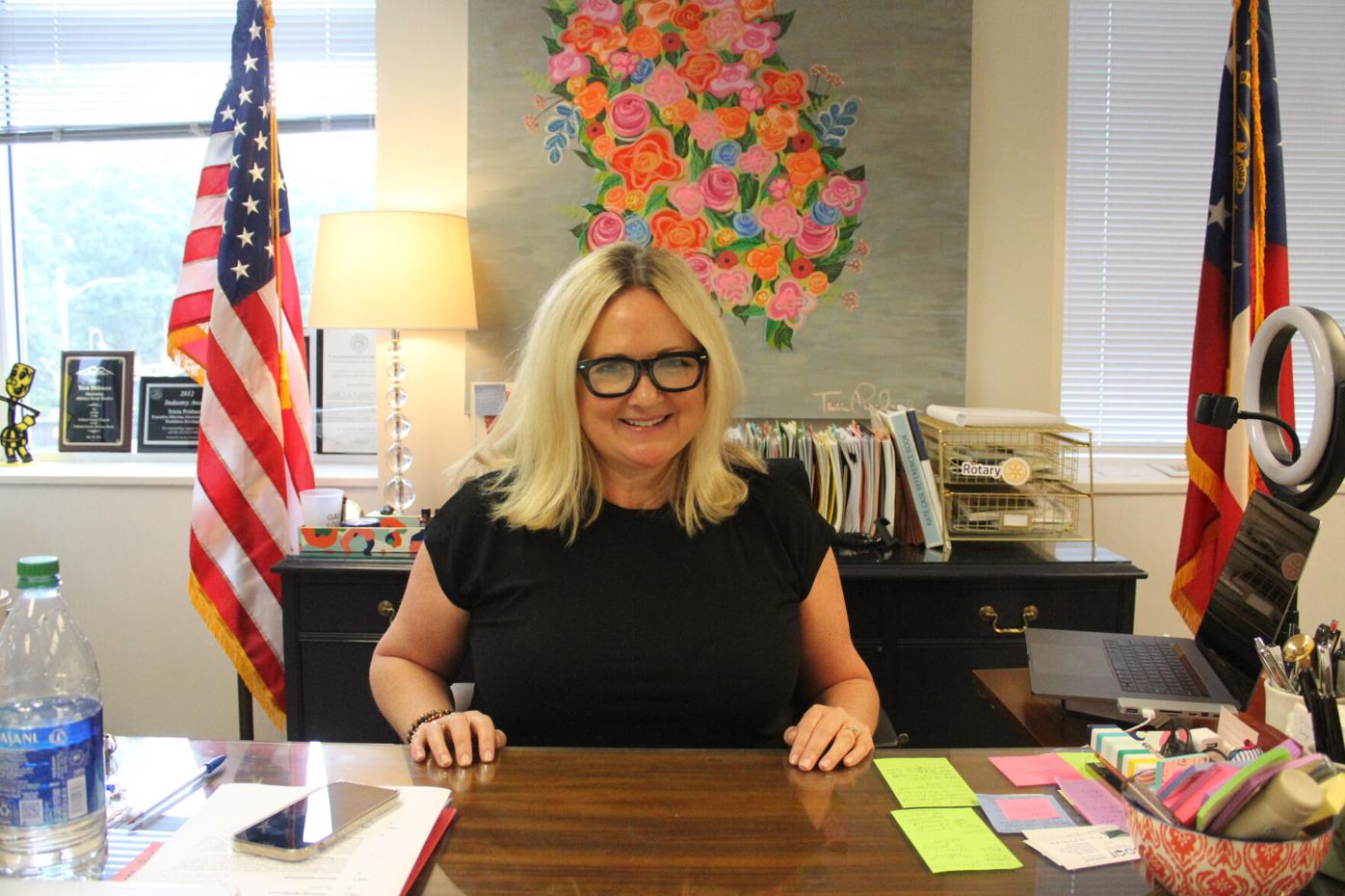 Tricia Pridemore, chair of Georgia’s Public Service Commission, sits in her office near the Gold Dome in Atlanta. 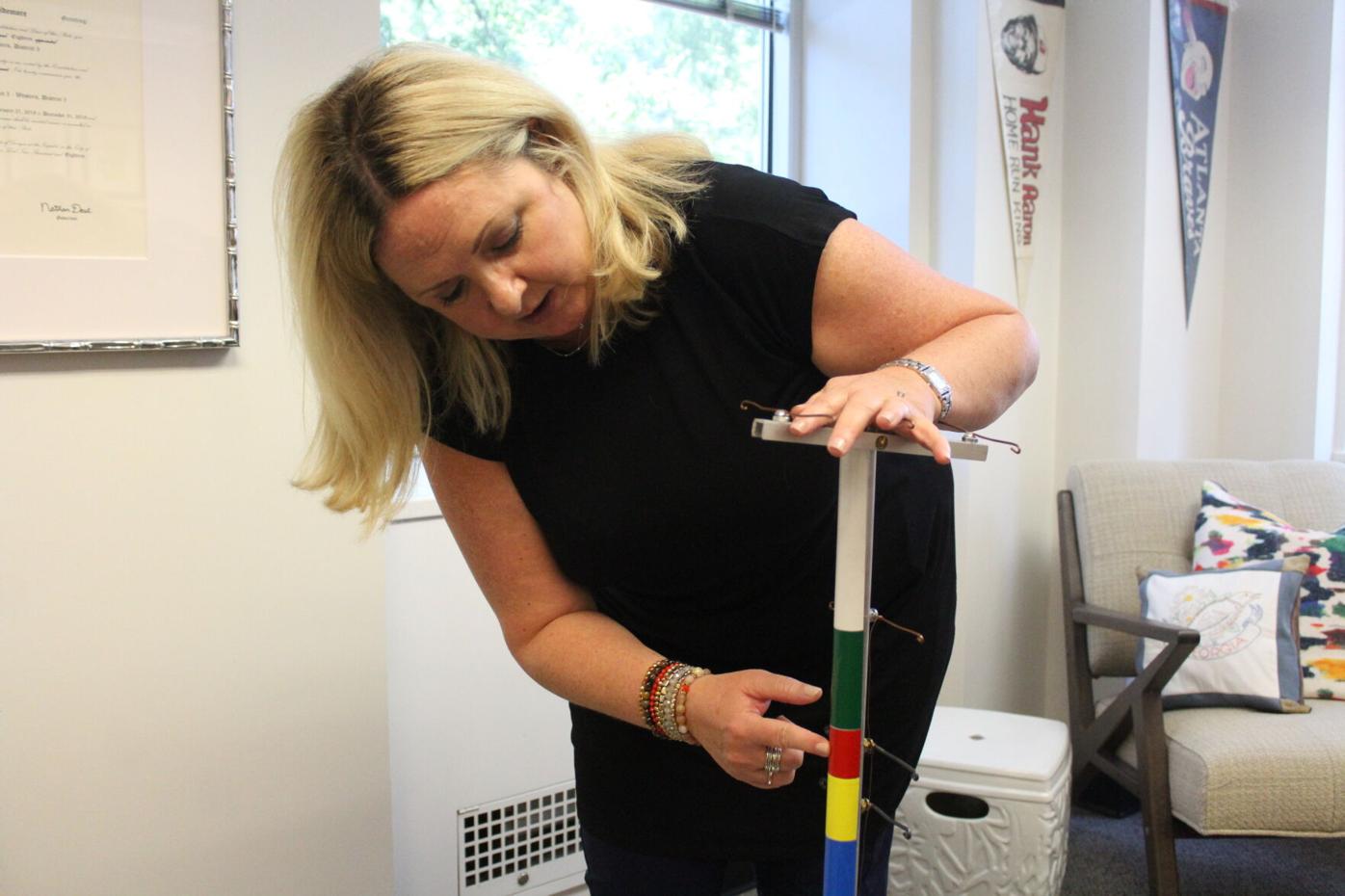 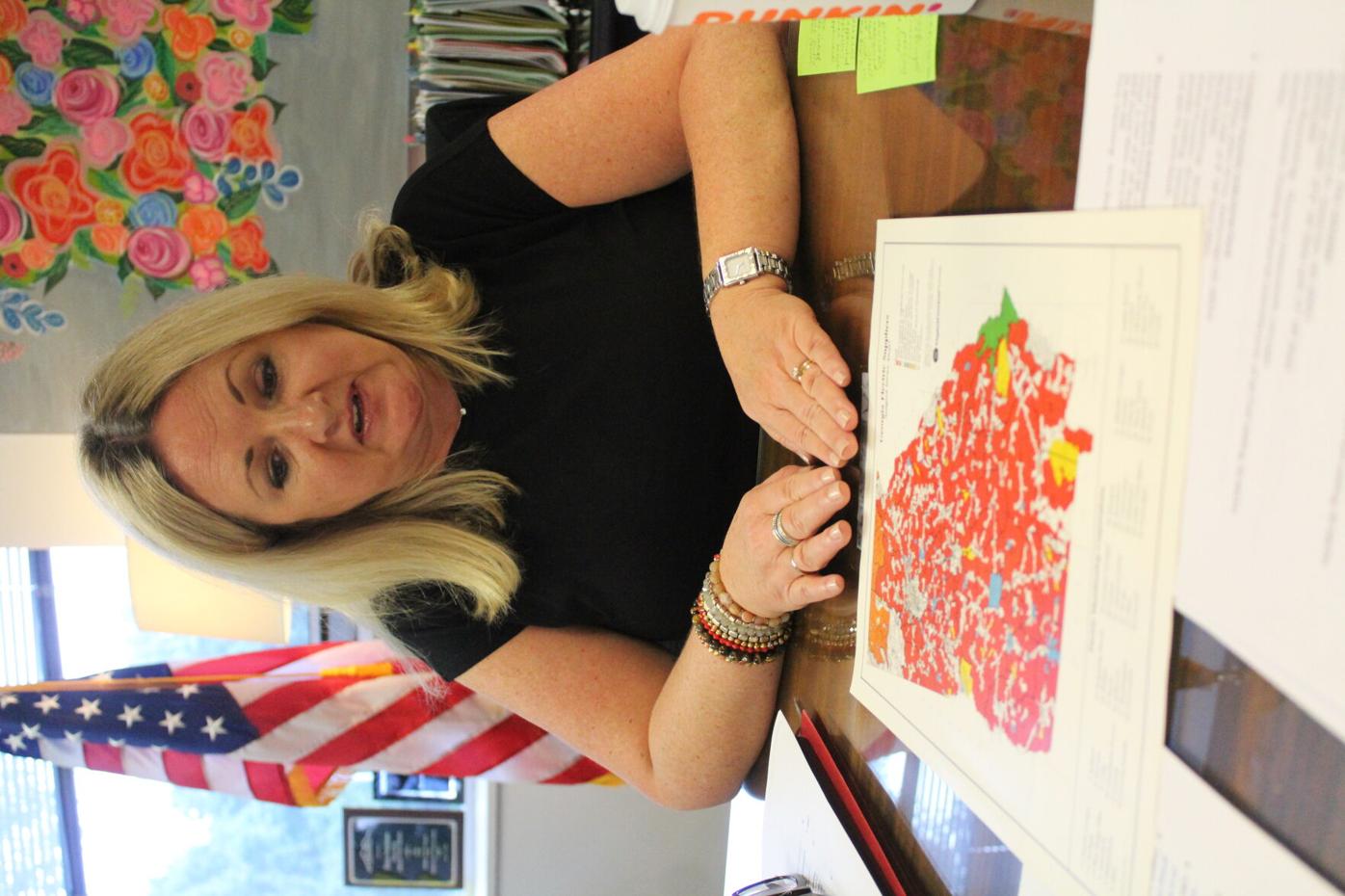 Tricia Pridemore, the newly-elected chair of Georgia's Public Service Commission, reviews a map of internet access in her office Thursday. 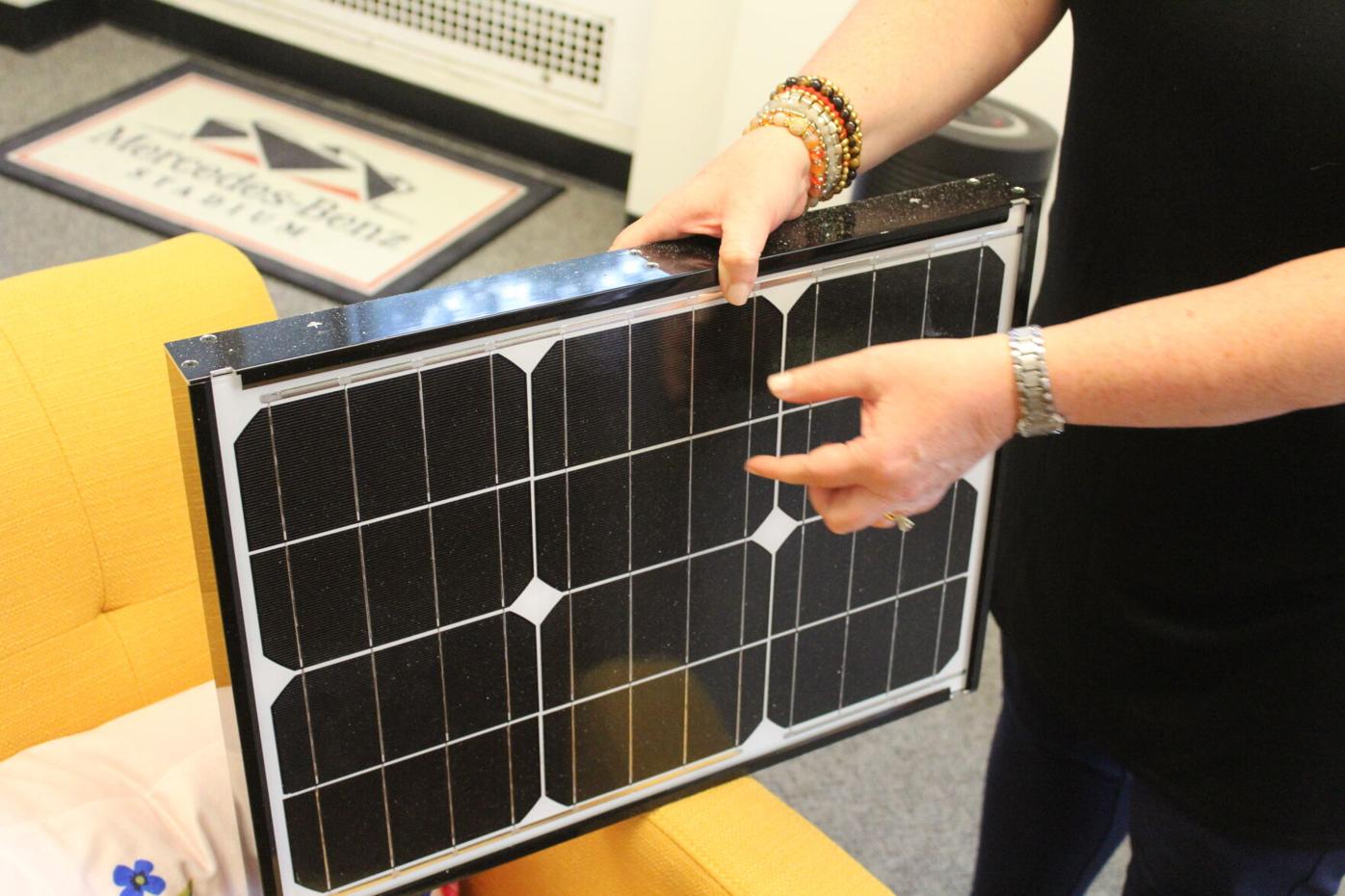 Tricia Pridemore, the newly-elected chair of Georgia's Public Service Commission, shows off a solar panel in her office Thursday. 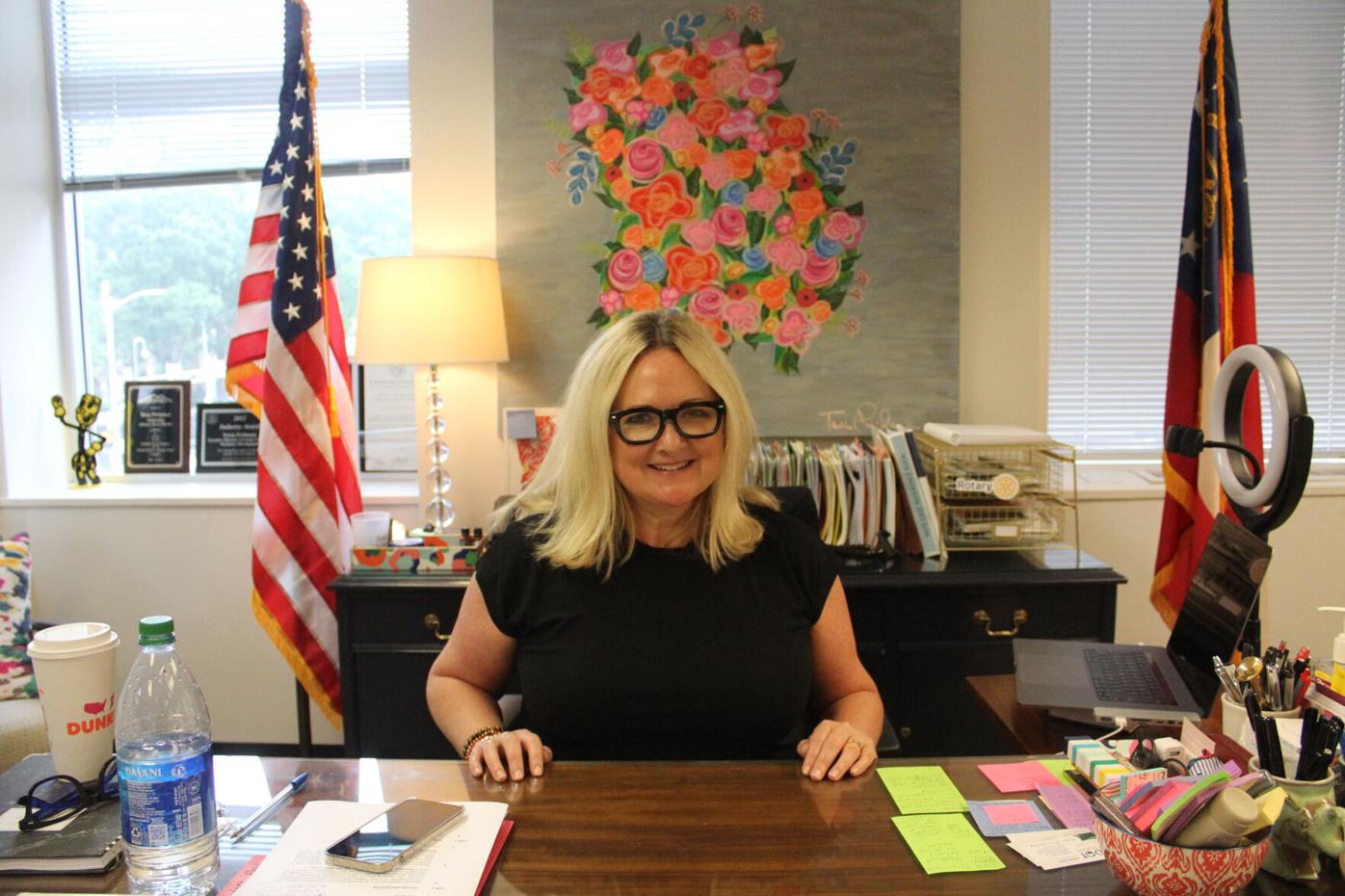 Tricia Pridemore, the newly-elected chair of Georgia's Public Service Commission, sits in her office near the Gold Dome in Atlanta.

Tricia Pridemore, chair of Georgia’s Public Service Commission, sits in her office near the Gold Dome in Atlanta.

Tricia Pridemore, the newly-elected chair of Georgia's Public Service Commission, reviews a map of internet access in her office Thursday.

Tricia Pridemore, the newly-elected chair of Georgia's Public Service Commission, shows off a solar panel in her office Thursday.

Tricia Pridemore, the newly-elected chair of Georgia's Public Service Commission, sits in her office near the Gold Dome in Atlanta.

And what is her job, as newly elected chair of that commission? To continue, she said, “the increased respect that this agency is receiving in state government because of our effectiveness solving longstanding problems.”

The Public Service Commission is a relatively obscure body. But it is hugely important. As its website states, “very few governmental agencies have as much impact on people’s lives as does the PSC.”

It regulates telecommunications, natural gas and electric utilities in Georgia, with the exception of electric membership corporations and municipally-owned utilities. Among its chief responsibilities is setting the rates its regulated utilities can charge customers.

And it has a big year ahead of it, according to Pridemore: In 2022, the first of two long-delayed nuclear reactors is set to come online; it will consider rates proposed by Georgia Power, and Atlanta Gas and Light; and it will set its long-term energy generation and transmission goals.

Pridemore, a Republican, has served on the Public Service Commission since 2018, when she was appointed by then-Gov. Nathan Deal to serve out the remainder of another commissioner’s term. She was elected to a full six-year term several months later and, this year, was chosen by her peers to become the first elected woman chair the body.

Among her fans is state Rep. Don Parsons, R-Marietta, who has chaired the Georgia House’s energy, utilities and telecommunications committee for more than a decade.

”I’ve been impressed with all of our public service commissioners,” Parsons said. “I think they do a good job, and that includes her. I think she takes her job very seriously.”

Pridemore attributed the body’s newfound respect among lawmakers to a deal it struck in December, a deal that may bring internet access to a large swath of rural Georgia.

Cable companies have long sought access to utility poles, to which they wanted access “at a significantly discount(ed) rate,” she said.

The commission helped both sides strike a deal: cable companies could attach to a utility pole anywhere in Georgia at a fixed rate, but would receive a much better price — $1 per pole — if they agreed to bring broadband to underserved parts of the state.

Since December, when the deal was struck, the number of internet providers in rural Georgia has jumped from two to 19, according to Pridemore.

NUCLEARThe biggest issue before the commission, Parsons said, is finishing construction on a pair of nuclear reactors that are well behind schedule and over-budget.

Georgia currently gets 17% of its energy from a pair of nuclear power plants: Plant Hatch, in southeastern Georgia, and Plant Vogtle, near Augusta. In 2009, the PSC approved a request from Georgia Power and several smaller utilities to expand Plant Vogtle by installing two new reactors, a project that would bring nuclear’s share of energy generation in Georgia to 25%.

The first of the two new reactors at Plant Vogtle originally was to be completed in 2016, with the second reactor to go into service one year later. But the project has encountered a number of delays, due in part to the bankruptcy of Westinghouse Electric, the original prime contractor.

The cost of the project has nearly doubled from the original estimate of $14 billion approved by the commission a dozen years ago to about $26 billion.

“Regulators, utilities, and Wall Street see an end in sight for the project. Both units 3 and 4 are capped (and) hot functional testing, which is the primary testing of nuclear capability and the ability of the unit to produce power, is completed and successful,” Pridemore said. “(Georgia Power) have not come back to the ratepayer to ask for recovery of those overages beyond ($7.3 billion) at this point,” she added, before acknowledging “they still could.”

Regarding timeline delays, Pridemore said the project had been battered by unforeseen circumstances, including the Westinghouse bankruptcy and the pandemic.

Some 7,000 people are on-site at any given time, making it one of the largest construction projects in the country. And much of that work is done in close-quarters, where social distancing is impossible.

“Considering the impact that the pandemic had on the site,” she said, “I’m pleased only two quarters (six months) were missed.

“The project has been hit with challenge after challenge after challenge,” she continued. “But when it’s finished, it will provide the state of Georgia with 60 to 80 years of carbon-free, 24 hours a day, seven days a week, 365 days a year electricity. Which matters that no matter what Washington decides about the future of America’s energy fleet, we do know that nuclear will be included in it.”

CLIMATE CHANGEDespite highlighting the carbon-free appeal of nuclear energy, Pridemore brushes aside criticism from environmentalists who argue the commission should prioritize expansion of the state’s portfolio of carbon-free and renewable energy sources, such as wind and solar power.

Democrat Patty Durand, who announced this summer she would seek to unseat Republican Commissioner Tim Echols in next year’s election, has criticized the commission for not moving aggressively enough to develop renewable energy.

“Why is Georgia one of only 11 states with no renewable energy goals or climate plan?” she asked. “North Carolina produces 20% of its energy from renewable resources. Georgia can too.”

Democrat Daniel Blackman, who lost in January’s runoff election to Republican incumbent Lauren McDonald, accused McDonald and the other four members of the all-Republican commission of dragging their feet on moving away from the use of coal in power generation toward a greater emphasis on renewable energy, particularly solar power.

“Oftentimes, when people want to turn us into environmental regulators, they don’t understand what the PSC does,” Pridemore said. “We are first and foremost financial and market regulators. Now, what comes before us and what the utilities propose, may or may not have an environmental impact.”

But environmentalists have long stressed climate change and the chaos it is expected to bring is a threat to financial markets. When asked whether a changing climate — with its hotter weather, increasingly severe storms and the like — should be considered by financial markets regulators, Pridemore demurred.

“I’m not a meteorologist, so I don’t delve into climate science, but what I do look at is whether or not the purchase that the utility is making is going to have long-term viability for the state,” she said. “The challenge that regulators have all over the country is, how do we adopt new, renewable and clean technology while not over-financing it and increasing rates. At the end of the day, there’s going to be somebody at the other end of the light switch who’s going to turn it on, and they’re going to pay for that product that comes through. And my job is to make sure that they get the absolute best value and the absolute best quality product.”

LOOKING FORWARDNext month, the commission will begin work on a 30-year plan for natural gas, the “capacity delivery plan.” According to Pridemore, Utah is the only other state in the nation with such a plan.

“This plan will help us look at not just pipeline expansion, so we can provide more counties with natural gas that don’t have it today, it’ll also look at RNG” — “renewable natural gas,” the harvesting of methane from poultry farming and ranching operations — “and then we’re also going to continue to look at the expansion of (liquid natural gas).”

Next year, the commission will consider rate proposals from Georgia Power and Atlanta Gas and Light as well as a Georgia Power “integrated resource plan,” a “20-year strategic document where we set electric generation and transmission goals.”

There is, however, another thing she would like to see, even if it isn’t necessarily a goal of her chairmanship or the subject of any new initiative.

“I hope that people recognize that all of these little things, and infrastructure that we may just kind of lose track of in our daily lives — we don’t recognize the importance of an electric pole, until one goes down in front of our house,” she said.

Tricia has been trying to get elected to something now for 20 years, ever since she claimed to work on the Bush campaign while a student at KSU (when they had no YR group to work with). What are her quals for this position I wonder? Don Parsons is on record supporting Gov. Kemp, along with Carson, Cooper and Setzler. They must not think what the governor did to undermine Georgia's election integrity and give the state to Stacy Abrams is a big deal, but I would suggest all of these "republicans" are rinos who put themselves first and the people dead last.

I find it amazing we can agree on anything, but you are right. She has zero (0) qualifications for that job. The top 2 candidates for the last PSC election raised over 1 million dollars for their campaigns! What??? How??? The article fails to mention that the public service commission is also in charge of giving permits to the companies who make Spam calls. They are supposed to regulate it and punish those companies. It's a failure of the greatest magnitude. With no proof, I think they are in the pocket of the big companies. How else do you raise that much money for an elected seat that no one knows about?