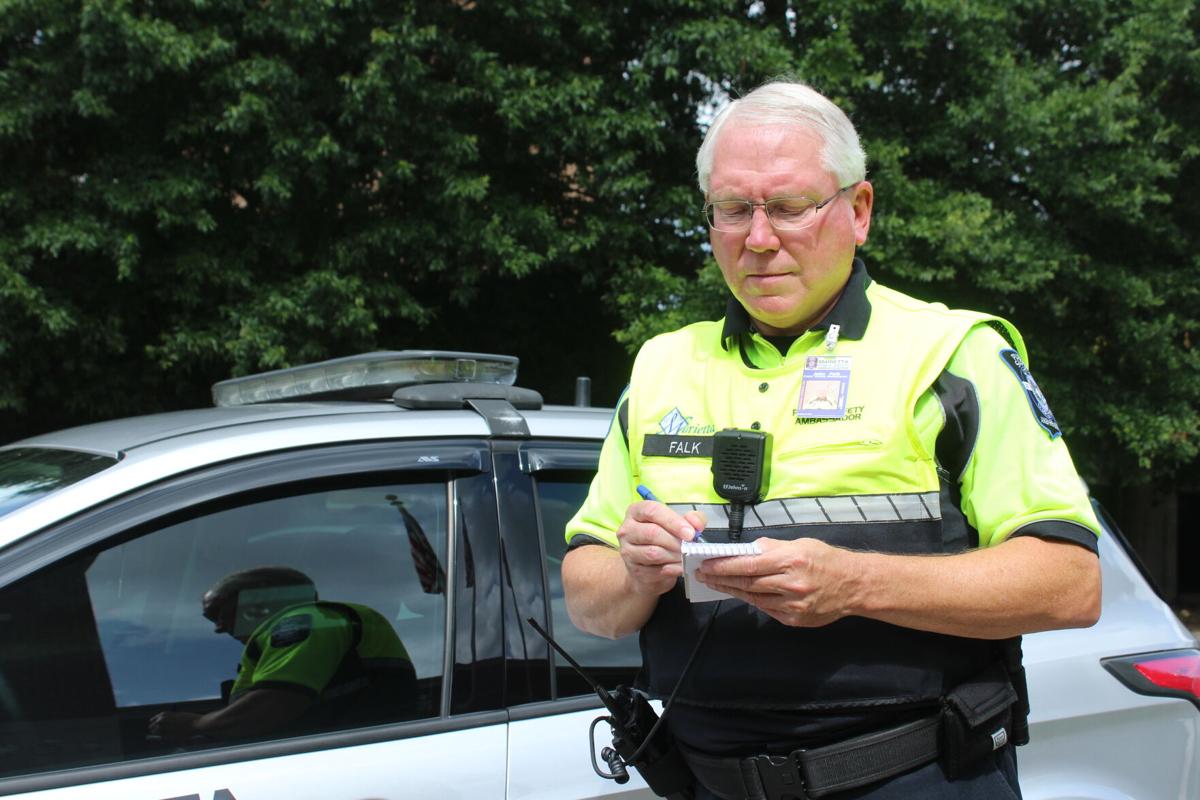 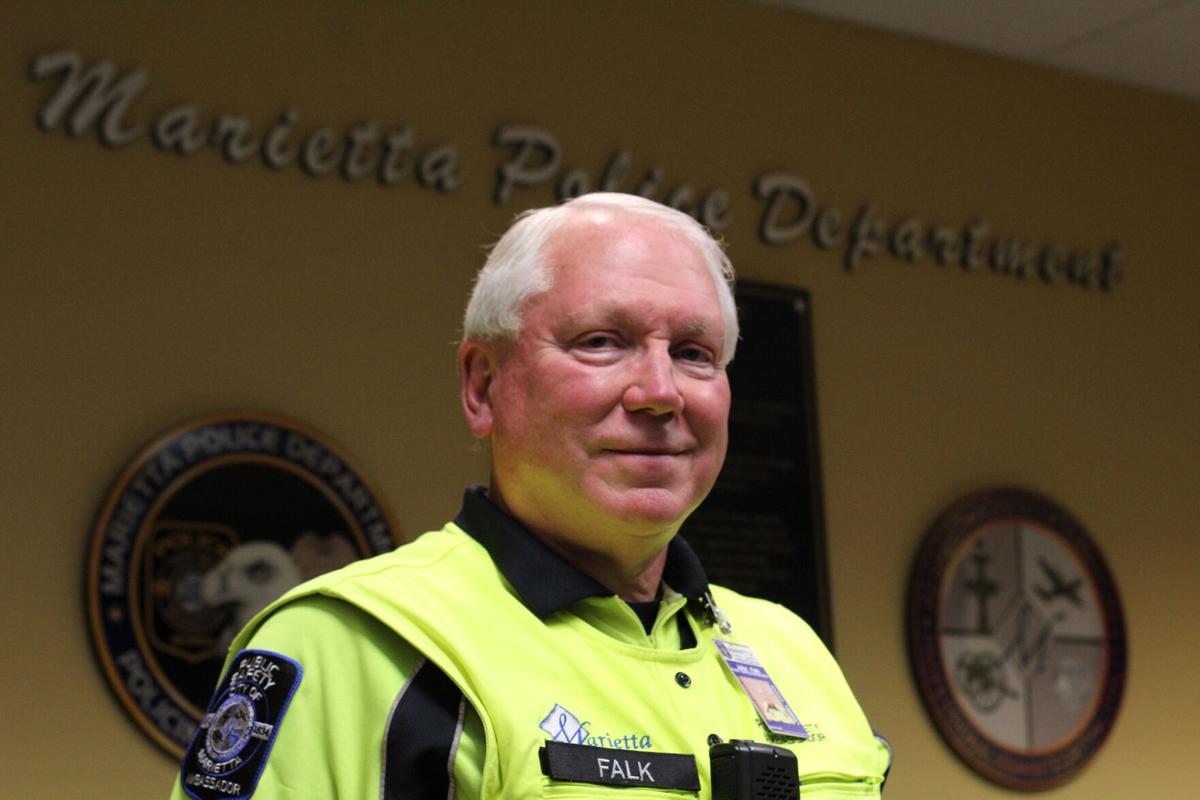 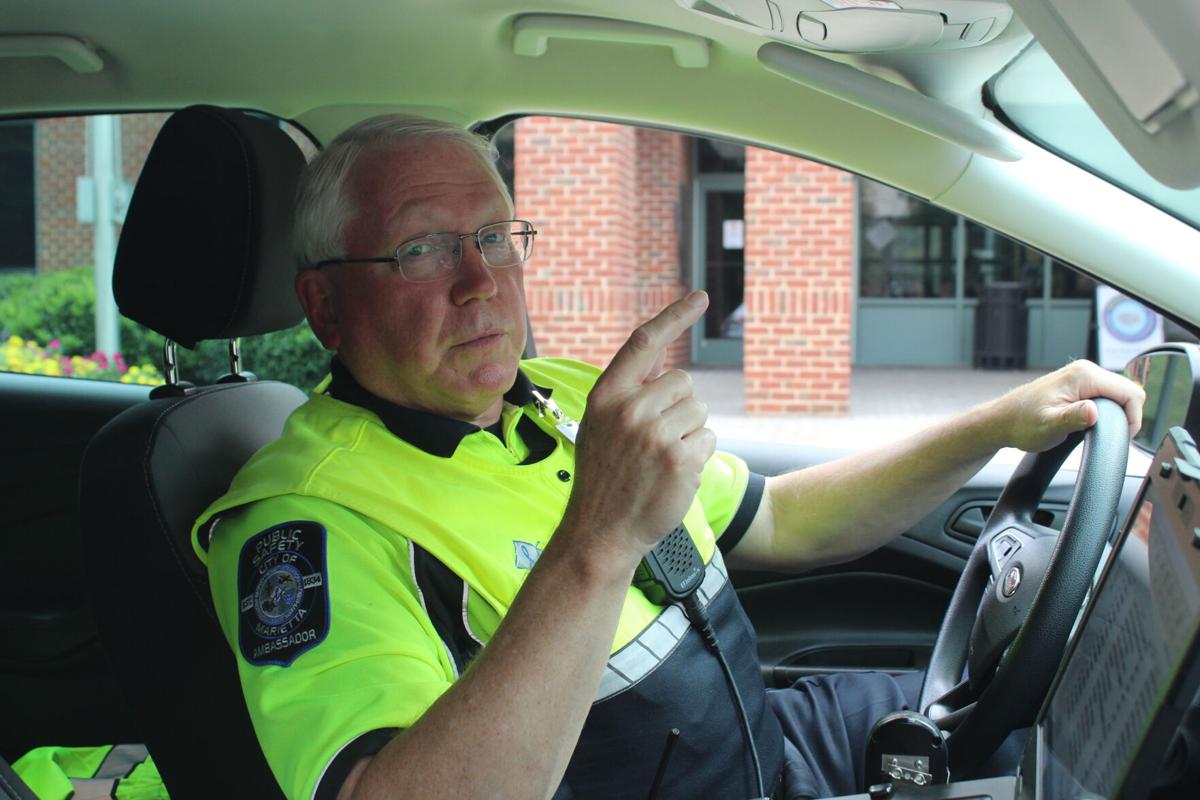 John Falk discusses his job as a public safety ambassador. 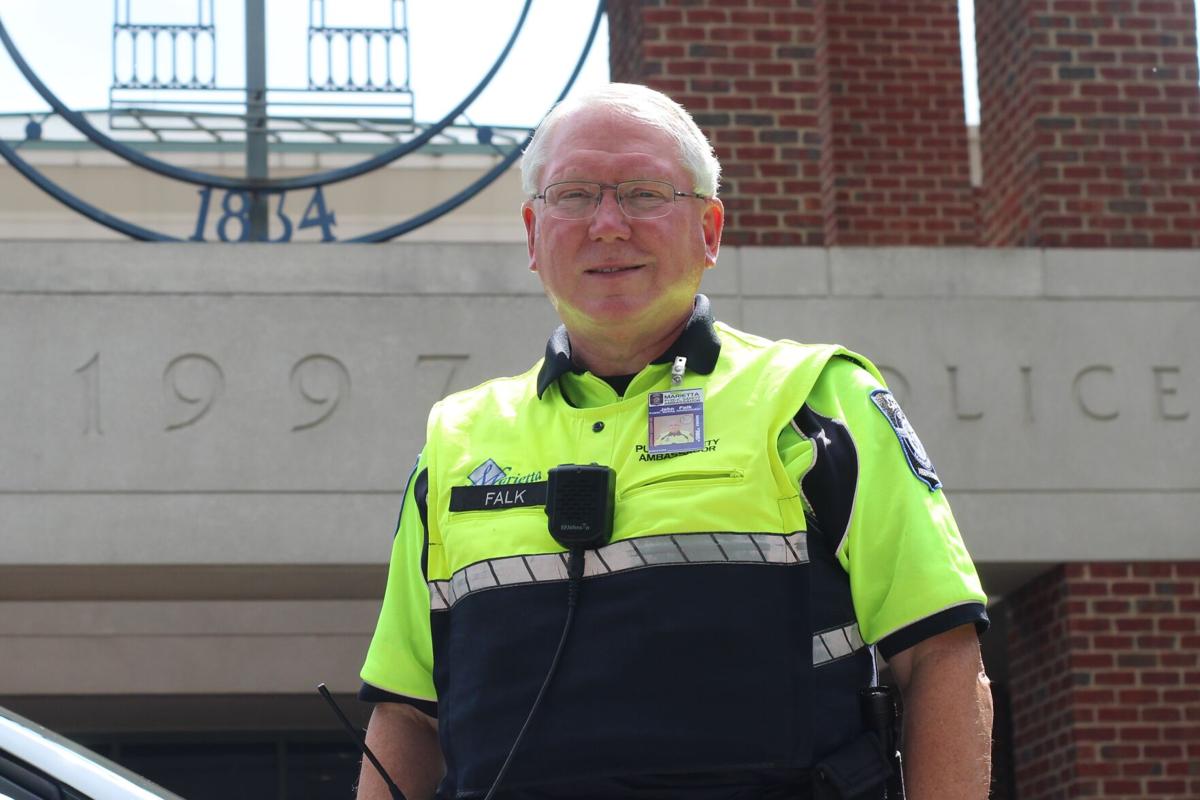 John Falk, 70, is a public safety ambassador for the Marietta Police Department. 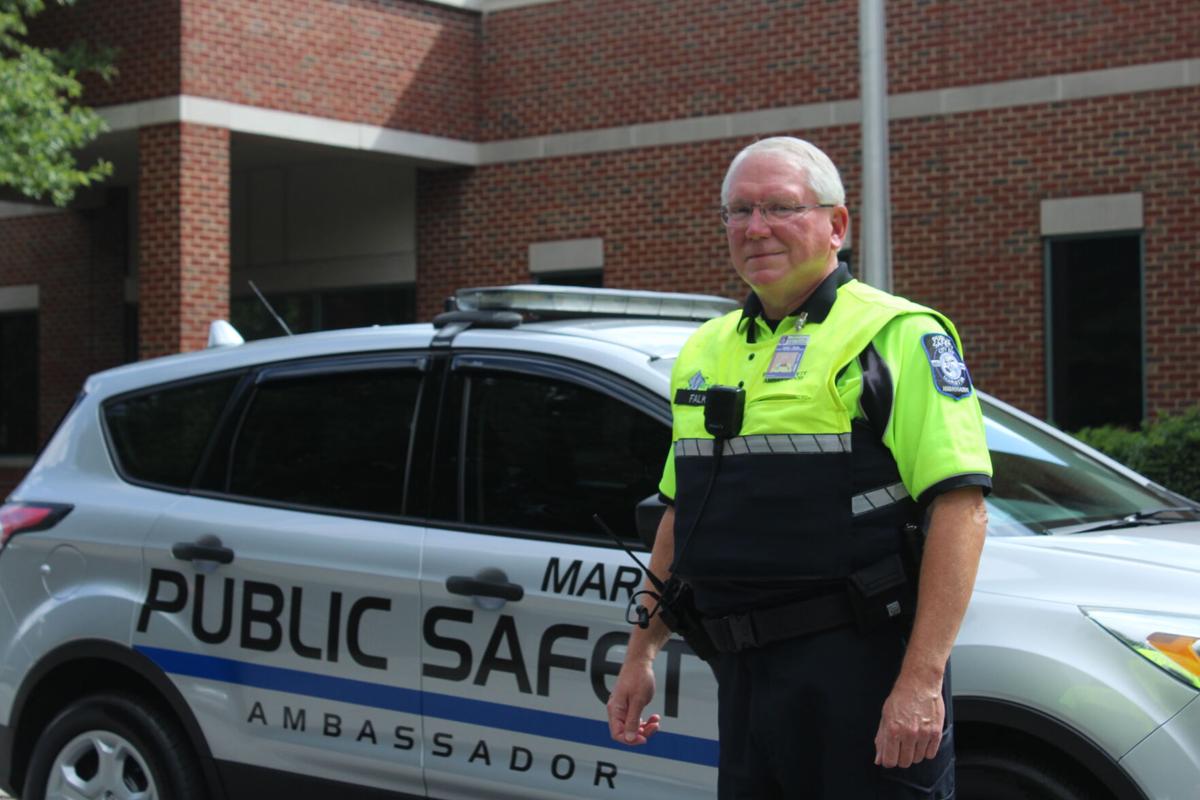 Public safety ambassador John Falk stands with his patrol vehicle, which is equipped with flashing yellow lights instead of police blue lights. 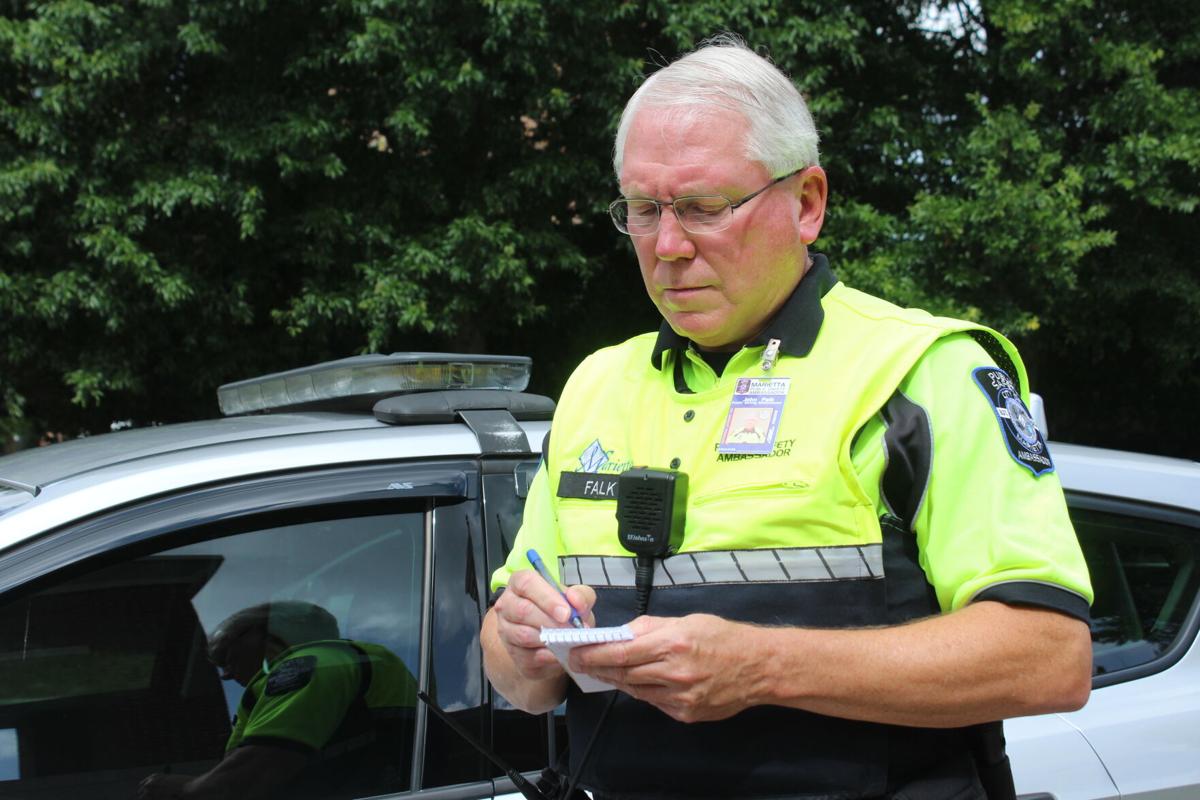 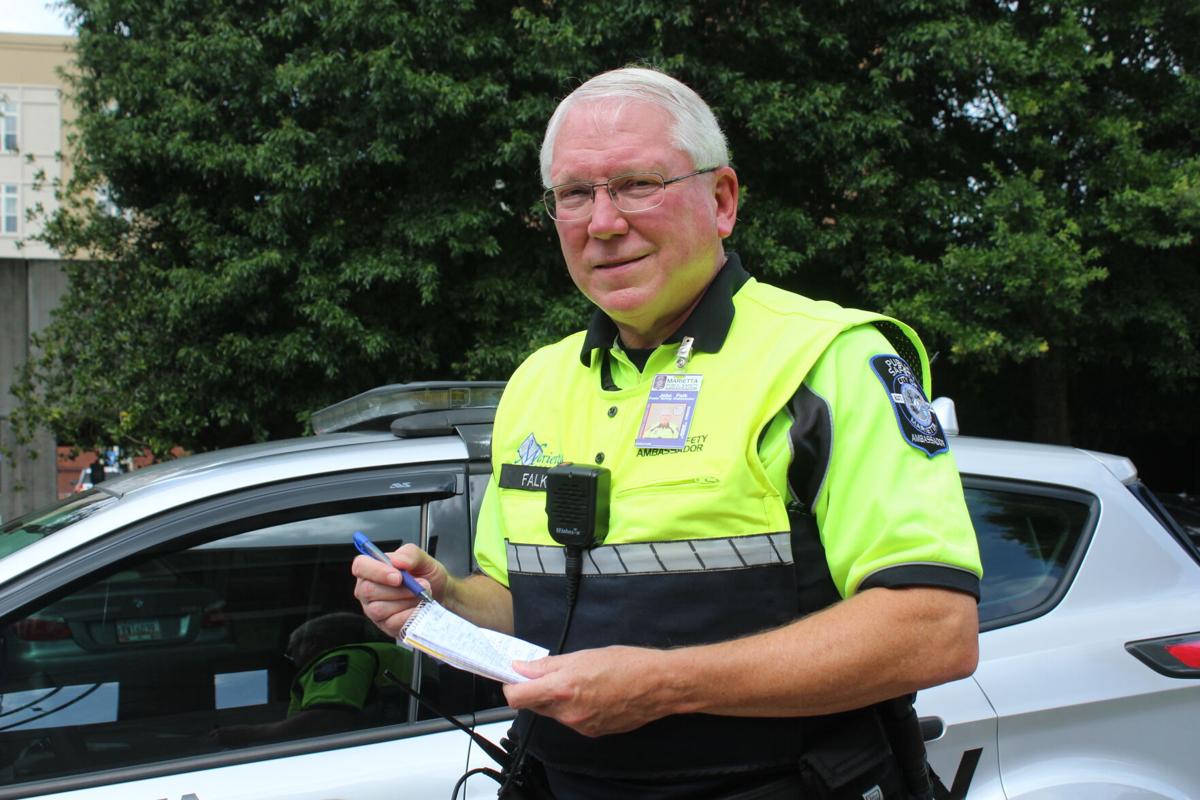 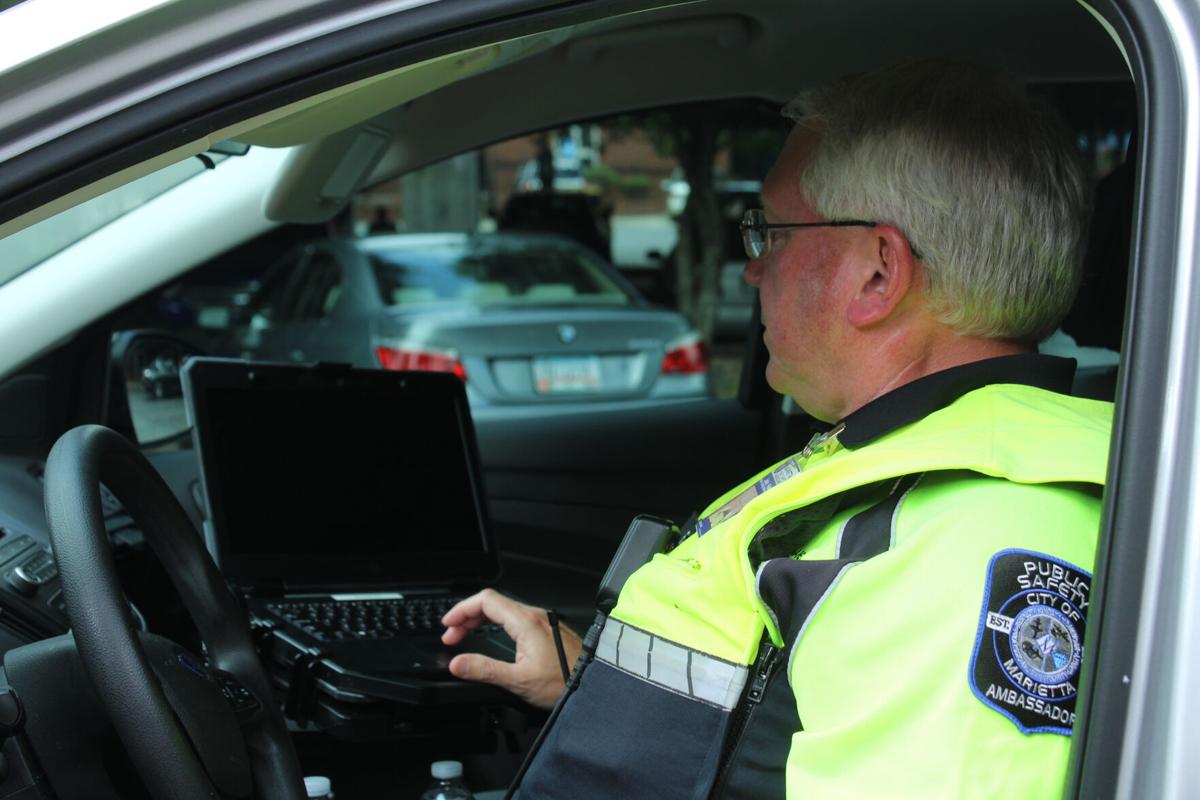 The public safety ambassador cars, like the one John Falk drives, are equipped with a car radio and a laptop.

John Falk discusses his job as a public safety ambassador.

John Falk, 70, is a public safety ambassador for the Marietta Police Department.

Public safety ambassador John Falk stands with his patrol vehicle, which is equipped with flashing yellow lights instead of police blue lights.

The public safety ambassador cars, like the one John Falk drives, are equipped with a car radio and a laptop.

MARIETTA — John Falk, 70, can be found most mornings directing traffic around Marietta Middle School when the school is open for classes. As an employee of the Marietta Police Department, he writes police incident reports, takes photos and other evidence at crime scenes and helps reroute traffic for car crash re-enactments.

He isn’t a sworn police officer but a public safety ambassador, a civilian in the department who takes on some tasks to free up officers for patrols and to respond to more urgent calls.

Falk, who has lived in Marietta for most of the past four decades, has been an ambassador, or PSA, for the department since the program’s inception three years ago, and has loved every minute of it. He says he is the “oldest and proudest” ambassador.

Falk tells stories about helping people: putting out cones and pushing a car that’s broken down, delivering a child car seat to a family that needs one, filling a can for someone who has run out of gas on the road so they can get to safety.

A few visible markers distinguish Falk from someone who’s sworn the police oath: part of his uniform is a bright, reflective green to help motorists spot him directing traffic or otherwise working on roads in the city, and though he drives a Marietta cruiser-like car, it says “public safety ambassador” and has yellow flashing lights on top instead of the blue police lights.

A Mississippi native, Falk grew up in Atlanta and worked in a funeral home in high school and college. He once thought he would spend the rest of his career doing that, but decided to help people in a different way. That experience helped prepare him for encountering death in his current role, he said.

From a sales and military career to Marietta PoliceLater, he spent many years selling office furniture to businesses. He said everyone should have the experience of working in sales because, as he said, “you have to do it to make it happen.”

He spent 37 years in the Air National Guard, playing clarinet and in the band for the 530th Air Force Band based at Dobbins Air Reserve Base. In a sense, that job was like his furniture sales career because he found himself “selling” the Air Force, he said.

Falk’s service with the police department began after he and his wife, Claudia, participated in Marietta’s citizens government academy and citizens police academy programs and were inspired to volunteer for the department. Later, he was recruited to work as a bailiff for the city’s municipal court before he joined the first class of public safety ambassadors.

Lt. Greg Stephenson, who oversees the PSA program, said the ambassadors have become essential to the department, and Falk is a leader among the dozen of them.

“He’s kind of an inspiration,” Stephenson said. “I pray and hope that when I’m his age, I have half the energy to drive, still working and have a smile.”

In February, Marietta Police named Falk its “Civilian of the Year.”

“I was blessed to receive that. I’m so proud of it,” he said, “but I would say I was just doing what I normally do. I didn’t do anything special.”

The job has its challenges. As a civilian, Falk isn’t normally sent to more serious calls but will occasionally call for backup if a situation becomes dangerous. Once, a woman told him a man was chasing her with a knife. Other times, people who’ve requested a simple police report turned out to have an outstanding warrant for their arrest.

Last month, he was on a zone patrol and some residents ran up to him, reporting they spotted a large black bear near Laurel Park. As authorities spent the whole day tracking the bear and eventually returned it to a natural habitat, Falk spent much of the time trying to keep curious neighbors out of harm’s way.

‘He has the tenacity to get out there and do it’John and Claudia Falk have two sons, four grandchildren and two great-children. One son lives in Marietta, and several other family members live in Kennesaw.

When he’s not working, John Falk runs an online store to support his hobby of model trains and railroads, is active in two model train clubs and sometimes displays railroad tracks in his basement. He’s still a musician, and before the pandemic was playing in jazz bands in the area. He is also active in the Shriners and played in another band made up of members of that organization.

Stephenson described Falk as a hard worker who is passionate about the job.

“I admire him. I admire the fact that, at 70 years old, that he has the tenacity to get out there and do it and ... the passion,” Stephenson said. “He takes the simplest report, like a lost or stolen cell phone, and he puts his heart into it. He actually talks with people and tries to help people out. It’s amazing.”