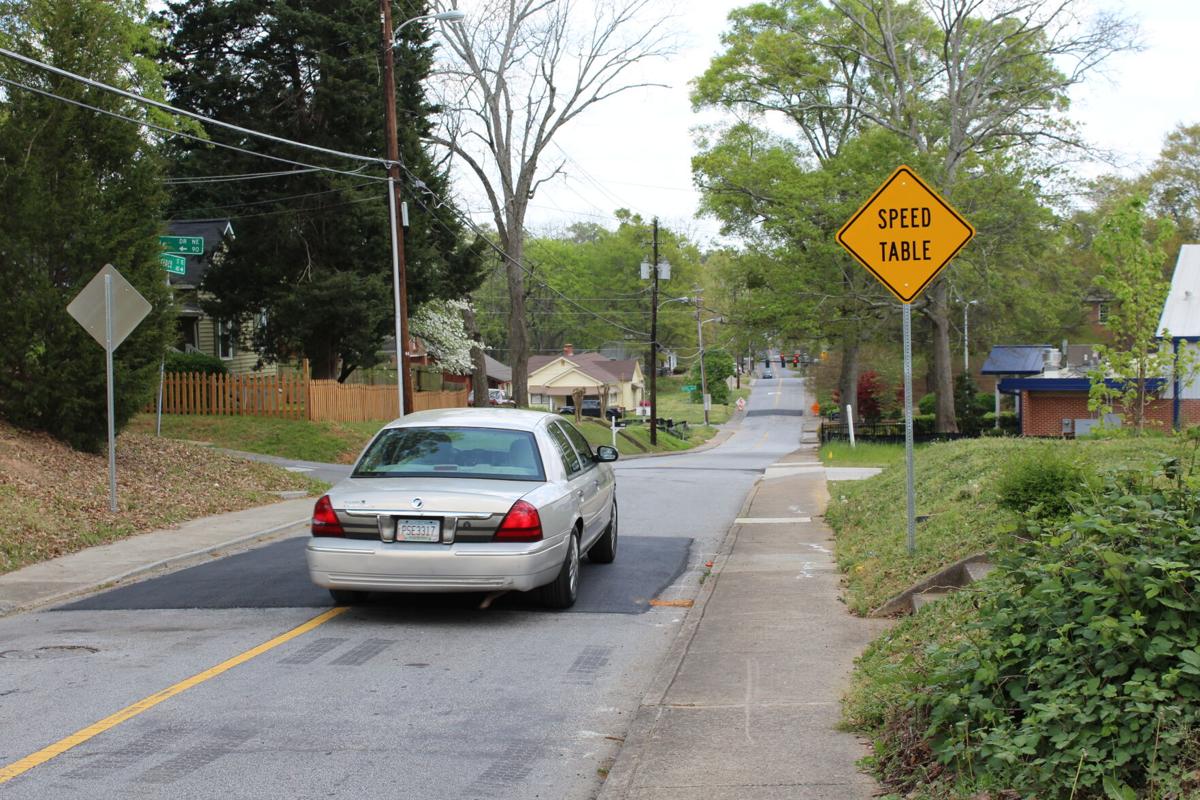 City of Marietta crews have installed speed tables on Lawrence Street, pictured here. While residents and businesses agree that speeding on Lawrence Street and Washington Avenue is a problem, the planned conversion of the streets to one-way traffic is being opposed by some. 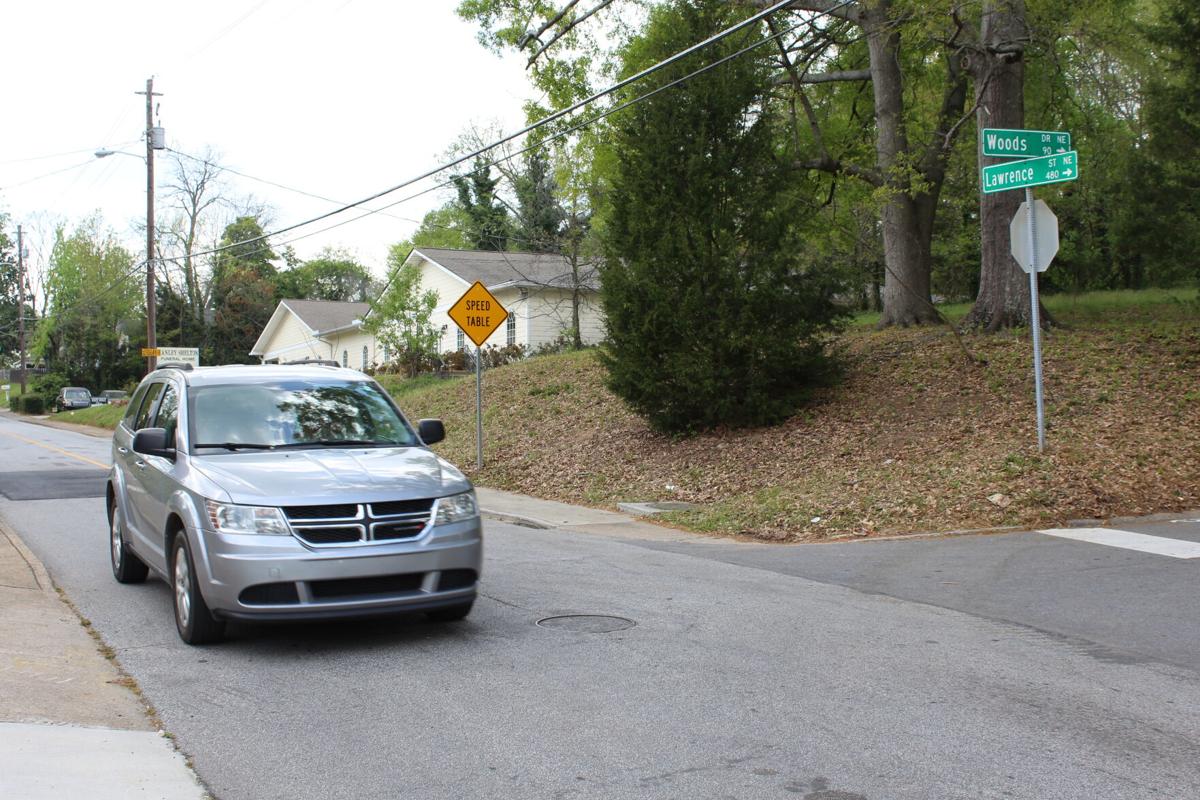 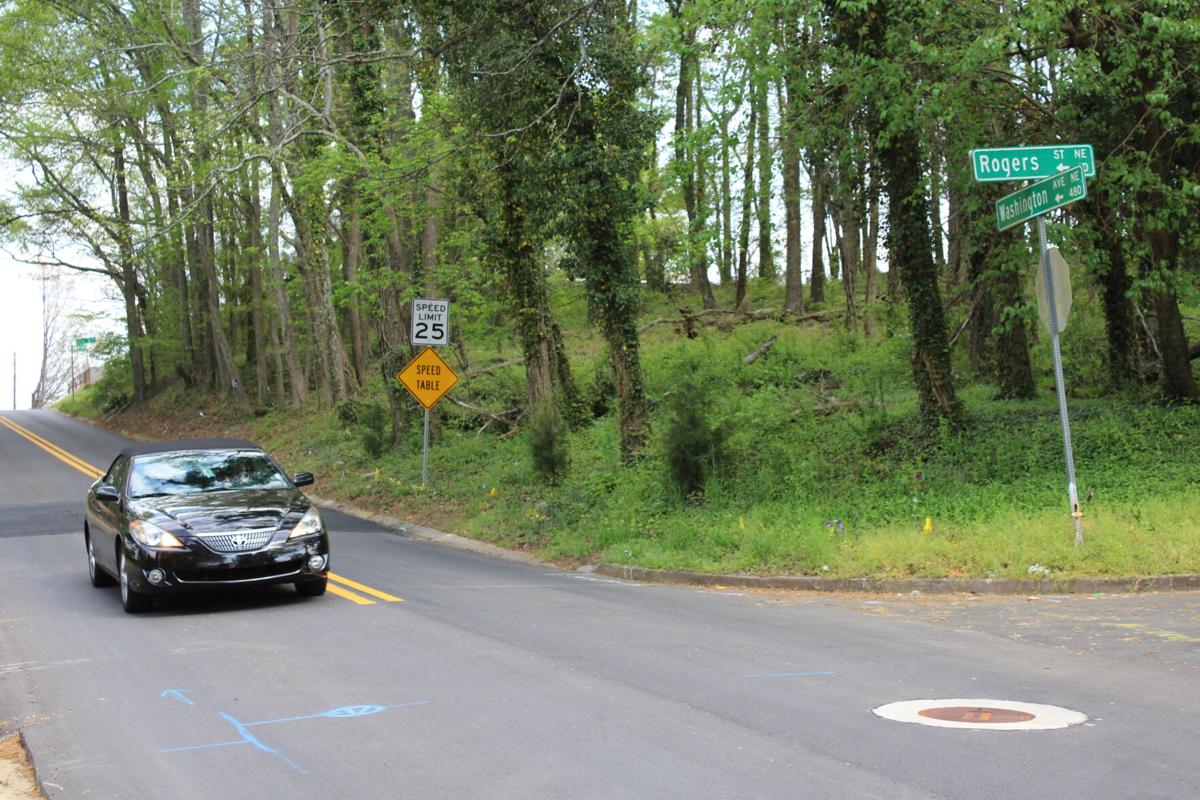 City of Marietta crews have installed speed tables on Lawrence Street, pictured here. While residents and businesses agree that speeding on Lawrence Street and Washington Avenue is a problem, the planned conversion of the streets to one-way traffic is being opposed by some.

City of Marietta crews are installing three speed tables each on Lawrence Street and Washington Avenue this week, the first part of a roughly $100,000-traffic calming project aimed at reducing driving speed in the area.

Additionally, the roads will be restriped and recentered for 10-foot-wide lanes, aimed at improving pedestrian safety. Four driver feedback signs — electronic signs that tell drivers how fast they are going — will be installed on each street.

The project was approved by the mayor and council last September.

While some residents are voicing opposition, it’s unclear whether they represent the majority of the neighborhood.

The city is still waiting on delivery of some signage. The switch to one-way cannot occur until all equipment has been received, city Public Works Director Mark Rice said. In order to give people in the area proper notice, signs will be posted at least two weeks in advance of the conversion to one-way, he added.

The project came at the suggestion of Ward 5 Councilman Reggie Copeland, who represents the area and had heard concerns from residents about speeding.

Public Works staff conducted a speed study and found the average speed on the two streets was 9-11 mph over the posted speed limits, according to Rice. The average daily volumes for each street was more than 1,600 vehicles per day.

Anthony Coleman, a former Ward 5 councilman, contacted the MDJ to say that residents did not know about the project and are opposed to making the streets one-way.

“Some people in the community feel like this is inconvenient for them. … I just don’t think it was well-thought out,” Coleman said. He added that he had never heard any concerns about speeding on the streets. Coleman doesn’t have a problem with trying to reduce speeding but thought other proposals should have been considered.

Copeland said, though, that two people he had grown up with have died on Lawrence Street. He said nobody has complained to him about the project, but he’s open to hearing from constituents who have concerns.

“I’m not into alternative facts and fake news, I just stick with the facts,” Copeland said, adding that the facts were that residents have concerns about the safety of people walking on the streets.

“Let’s save lives, save these kids, and no more deaths on Lawrence Street,” he said.

Mayor Steve Tumlin said nobody spoke against the project at council meetings, that the project had the same approval process as other road projects and that he felt it was a good solution to try and improve safety.

“I drive a Ford F-150, and I feel I test my reflexes when I drive down those streets,” Tumlin said.

Rice said the city sent notices to every property owner on the affected sections of Washington and Lawrence. In addition, Copeland held a public meeting on the matter last June. The meeting was livestreamed on Facebook. Rice said about a dozen residents attended, and none were concerned about one-way traffic.

An official public hearing on the matter before the mayor and council was not held, due to it being passed with the consent agenda.

The council discussed the issue last July during a Public Works Committee meeting.

Asked at that meeting by Councilman Grif Chalfant whether people at the meeting were concerned with the one-way proposal, Copeland said, “They didn’t have no problem with it. They wanted the speed slowed down, that’s the main thing.”

On the Facebook live stream, users left comments with mixed feelings — some said there was no speeding issue, some said one-way was the wrong approach, while others encouraged the one-way concept and said speeding was out of control.

Councilman Johnny Walker, who serves on the Public Works Committee, said he got a call Tuesday from a business in the area that said the road was fine as is.

“Maybe everybody on that street did not know,” Walker said.

Angela Orange, who chairs the Marietta Board of Education, has lived in the area for more than a decade. Orange said she didn’t understand the rationale, had no knowledge of a speeding problem and wishes there had been more community conversation about the project.

Rice said the roads are old and narrow (30 feet wide) and would be expensive to widen while maintaining two-way traffic, due to houses being close to the street and part of Washington Avenue being adjacent to Marietta National Cemetery.

The project can always be undone by the council, if residents raise a stink.

“Council can always reverse it at any time, even after we do the one-way conversion,” Rice said. “But my recommendation would be to let us try it, let it run for a while and see what happens.”