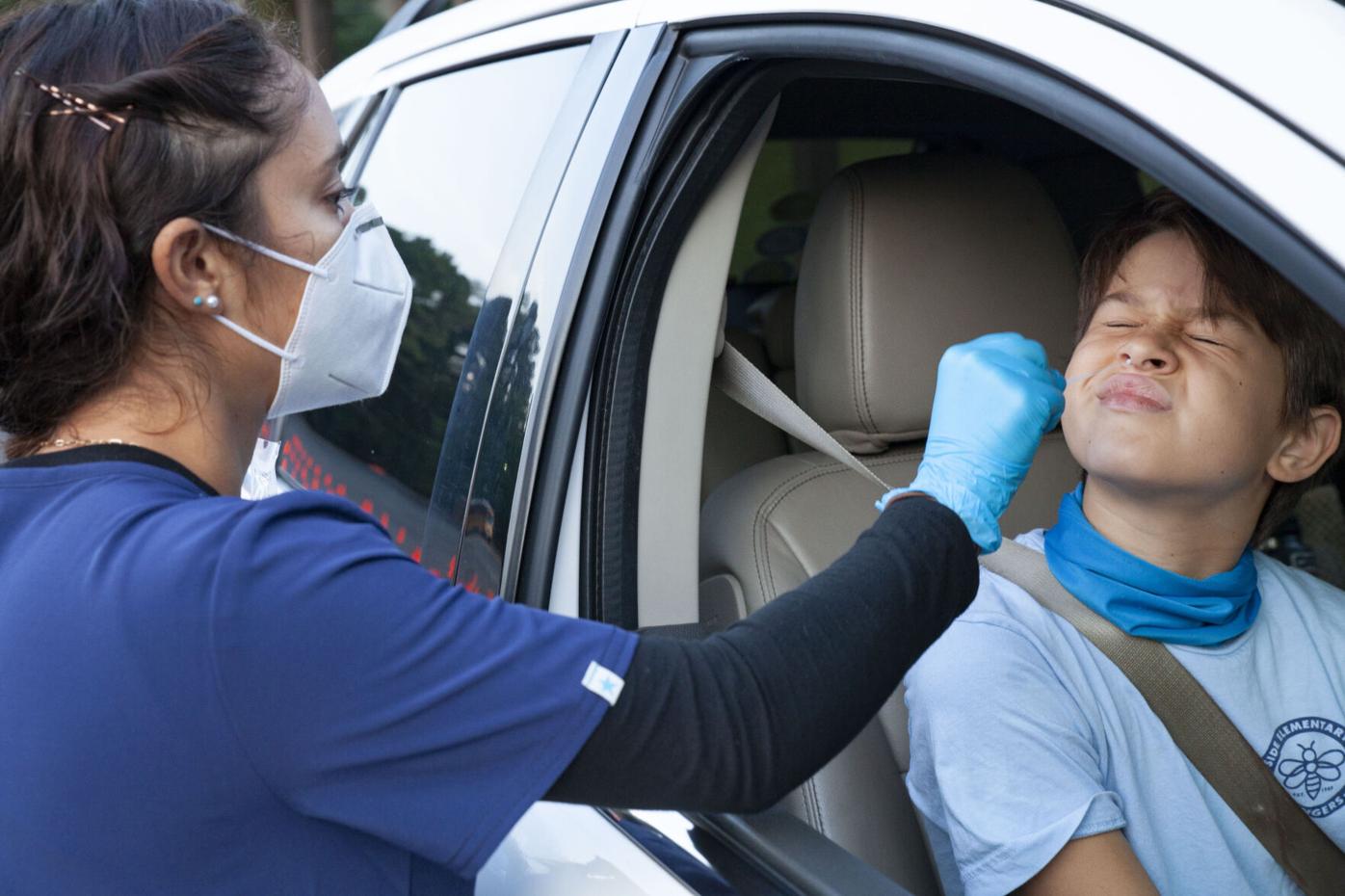 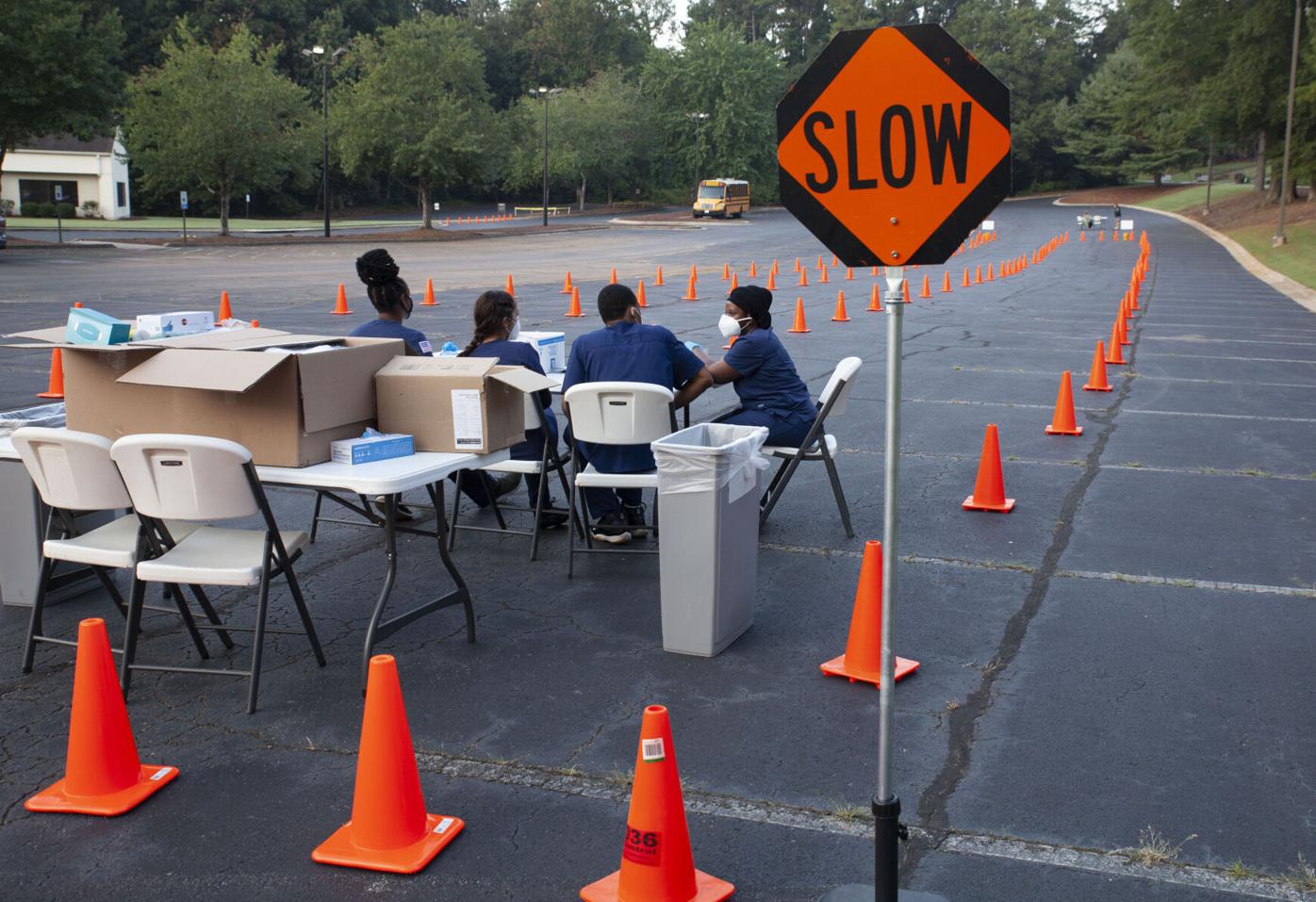 MAKO Medical employees wait for Marietta Schools families at a district COVID testing site at North River Church of Christ on Monday. The site is part of a new protocol that allows students and staff identified as close contacts with COVID-19 to test daily for their quarantine period instead of having no other option than to quarantine at home. 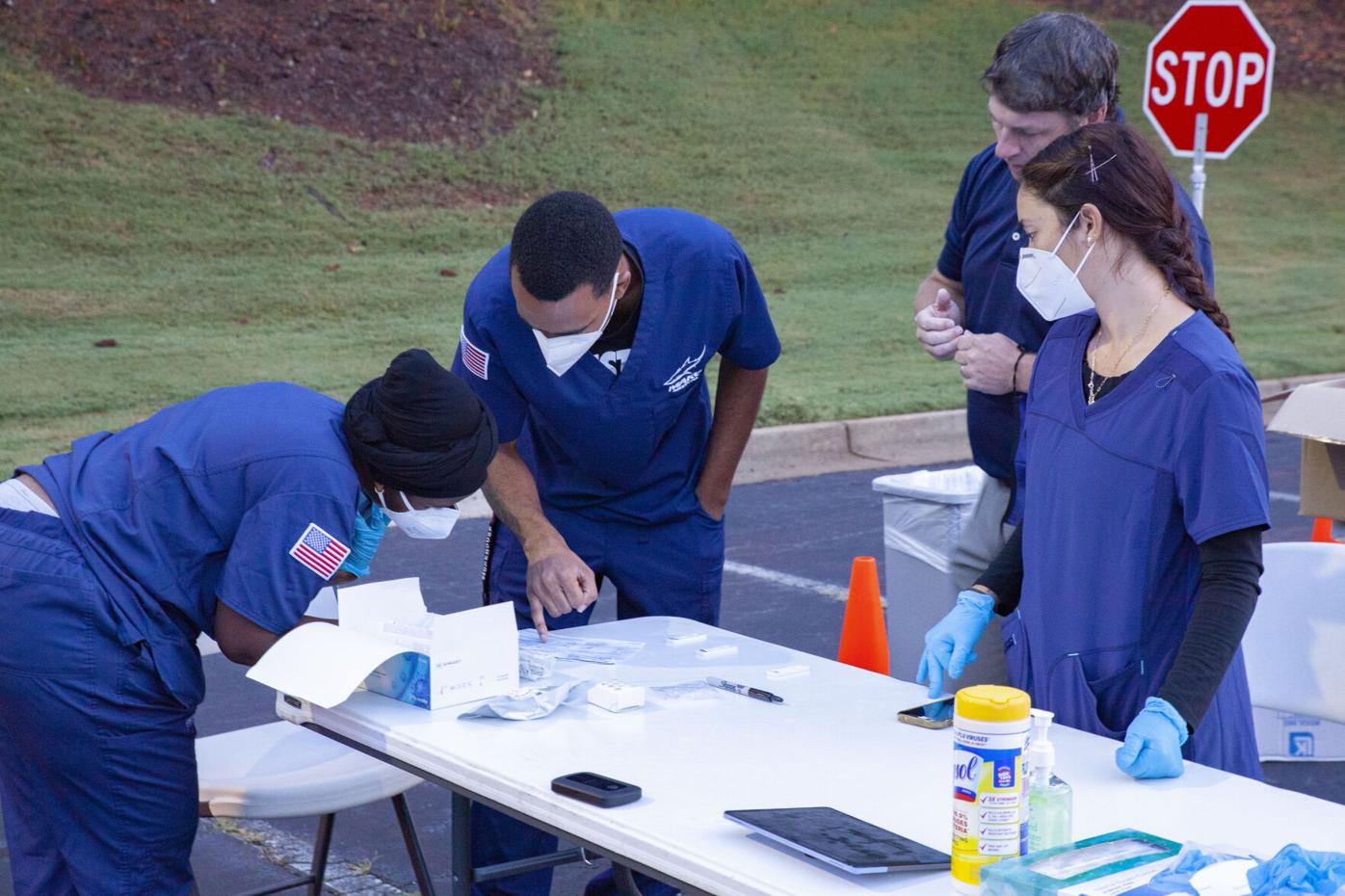 MAKO Medical employees prepare for Marietta Schools families at a district COVID testing site at North River Church of Christ on Monday. The site is part of a new protocol that allows students and staff identified as close contacts with COVID-19 to test daily for their quarantine period instead of having no other option than to quarantine at home.

MAKO Medical employees wait for Marietta Schools families at a district COVID testing site at North River Church of Christ on Monday. The site is part of a new protocol that allows students and staff identified as close contacts with COVID-19 to test daily for their quarantine period instead of having no other option than to quarantine at home.

MAKO Medical employees prepare for Marietta Schools families at a district COVID testing site at North River Church of Christ on Monday. The site is part of a new protocol that allows students and staff identified as close contacts with COVID-19 to test daily for their quarantine period instead of having no other option than to quarantine at home.

MARIETTA — Turnout was low on the first day of Marietta City Schools’ new daily testing protocol for families whose student has been identified as a close contact with a positive case of COVID-19, but district officials say they believe demand will ramp up.

Four families brought students to the parking lot of North River Church of Christ on Austin Avenue Monday morning, where the school district had set up drive-thru lanes and employees from MAKO Medical stood waiting to administer rapid COVID tests.

Under the new “test and stay” protocol, students who have been identified as close contacts with a positive case of COVID-19 while in school can sign up to get a rapid test at the site weekdays from 6:30 a.m. to 8:30 a.m. If their test comes back negative, they can return to their school for that day and come back the next day to do it again. The process repeats for the length of a normal quarantine period.

If the test returns positive, the student has to quarantine at home for seven to 10 days. Before the new protocol was introduced, “close contact” students and staff had no other choice but to quarantine at home. Marietta Schools Superintendent Grant Rivera said the new procedure is meant to keep healthy kids in school in person as much as possible.

Though only four families showed up Monday, district officials at the site, including Chief Operations Officer Chuck Gardner, said he expects once the word gets out more families will take advantage of the service.

Gardner said families sign up for 30-minute time slots, and ideally, 25 tests could be administered in each 30-minute period. Up to 50 tests may be able to be given in those slots, should demand dictate it, he said.

However, Gardner pointed out only 34 families were eligible to use the testing site on Monday. All four tests administered Monday came back negative, he said.

Shelley Strack, who works as the principal secretary at West Side Elementary, brought her West Side fifth grader, Jesse, to be tested at around 7:30 a.m.

Jesse squeezed his eyes shut as testers from MAKO Medical slid the testing swab up his nostril.

“I feel super encouraged,” Shelley Strack said. “I’m encouraged that the kids that can go to school can be in school safely. It’s really important. He needs to go to school. Virtual school just doesn’t work as well for him.”

Plus, she said, taking time off to have her son at home any time he’s considered a close contact is difficult. This way, at least there may be fewer of those occasions, Shelley Strack said.

After students are tested from the car they’re sitting in, they are free to drive away and receive an email with their test results within 30 minutes. Families and their schools get the email at the same time. If the test is positive, the school district also begins the contact tracing process for other students who may have been exposed to the one who tested positive, Gardner said.

The testing site is run through a partnership with Georgia Department of Public Health. The only cost to Marietta City Schools is staff time, Blass said, which “we will adjust as we get a better sense of demand.”

Gardner said the district is already investigating why, out of the 34 families eligible to get tested at the site on Monday, only six signed up and four showed up. He said the district hopes to find out if location, preference, communication and other barriers may be holding back participation.

Lemon Street testing siteMarietta City Schools also offers free COVID testing on weekdays for staff, students and families at 353 Lemon St. Turnout since the opening of the site on Aug. 23 has varied, according to Chief Impact Officer Kim Blass.

Blass said daily tests administered have ranged from a low of 43 to a high of 198.

The morning to noon portion will still only be for Marietta Schools students, staff and families. The afternoon hours will now be available for afterschool programs like the Boys and Girls Club and city of Marietta employees.

“Once we see if we are able to manage that additional volume, we will expand our reach,” Blass said. “Assuming we have capacity, our next step would be businesses and government employees located nearby on the Square (this would include Cobb County Government).”

Blass said the district expanded testing similarly in the spring, when it partnered with Peachtree Immediate Care.

“As long as we have capacity, we want to serve and support our community by helping meet this need for testing access,” she said.

DC Pulmonary Medicine in Marietta provides the staff and supplies for the Lemon Street site and is reimbursed through the Families First Coronavirus Response Act, Blass said.

Patients at district testing sites are asked to show proof of insurance or a government-issued ID, but Families First Coronavirus Response Act ensures that COVID-19 testing is free to anyone in the U.S., including the uninsured.

Cobb Schools testing surveyThe Cobb County School District last month opened a survey to parents asking whether they would participate in provided COVID-19 testing if it was available in schools. If Cobb chose to implement a testing program, it would also be through a partnership with local and state departments of health.

“Parent permission would be required, and COVID-19 testing options could help to reduce the amount of time students are not in a face-to-face classroom,” a survey notification to Cobb families reads.

District spokeswoman Nan Kiel did not respond to specific questions on the status of a decision on a testing program in Cobb Schools or how much participation there had been in the survey.

Kiel issued an emailed statement instead:

“Better understanding how COVID-19 testing could benefit our parents is important, and we will have decisions and details as soon as they become available.”

Prior to this week, vaccination requirements in Cobb County were limited to a select number of private companies, healthcare providers, and fe…

Beginning Monday, Marietta City Schools will use a new protocol for students identified as close contacts with COVID-19 that district official…

Citizen enforcement of Texas abortion ban could spread to other laws

30 years later, in search of the real impact of Nirvana's 'Nevermind'