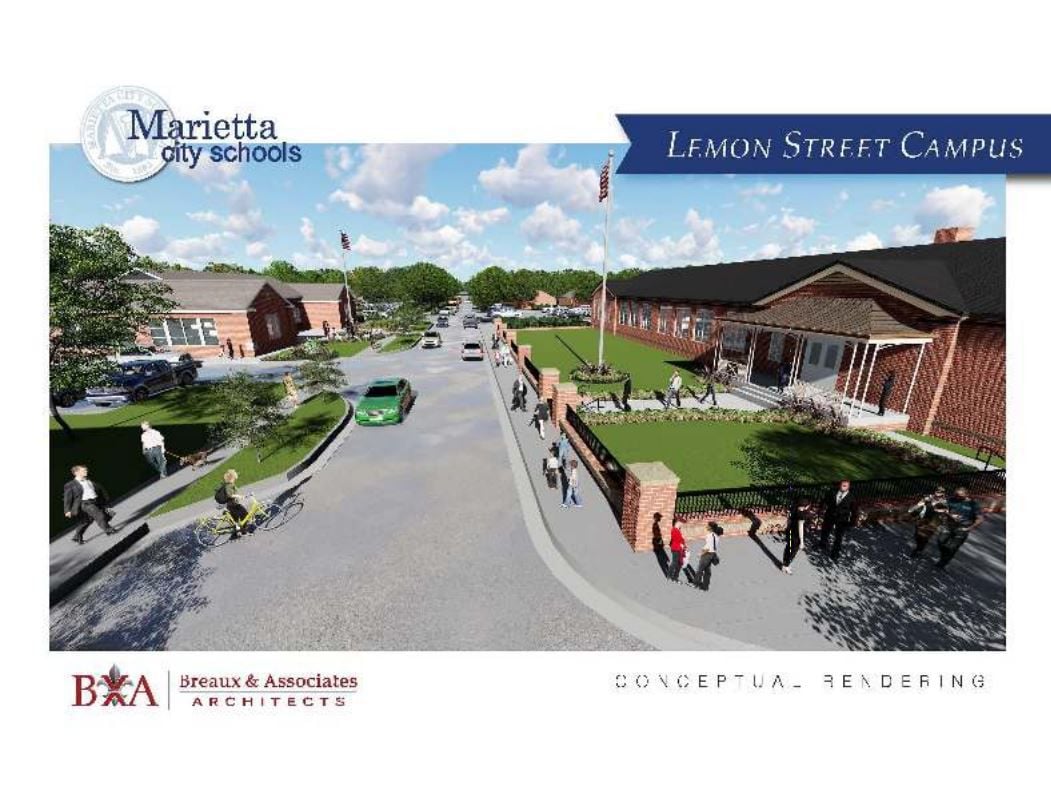 Superintendent Grant Rivera’s plans for a new central office include the renovation of the former Lemon Street Grammar School.

MARIETTA — Pending Marietta school board approval, the same company that is renovating the former school of Martin Luther King Jr. could also be awarded the construction contract for a central office project at historic sites in Marietta.

Parrish Construction Group is contracting with Atlanta Public Schools on the renovation of the shuttered David T. Howard building in Old Fourth Ward, which will reopen next year as Howard Middle School, according to Marietta district officials. King attended school at the Howard building.

The Marietta school board is scheduled to vote at its Sept. 17 meeting on whether to contract with Parrish Construction for a new central office replicating the former Lemon Street High School and renovation of the Lemon Street Grammar School.

Superintendent Grant Rivera has recommended the school board approve a $30,000 contract with Parrish for pre-construction services. At its Tuesday work session, the board placed the agenda item on the consent agenda for the Sept. 17 meeting.

Rivera said he is excited to bring on a company that understands cultural sensitivities in construction and renovation projects with historical significance to the community.

“Our priority is doing this Lemon Street (project) right. What I think ... gives (Parrish) credibility is that they’re doing Howard Middle School,” Rivera told the MDJ. “If it’s good enough for the family and community of Martin Luther King, Jr., then it’s good enough for Marietta City Schools.”

Rivera unveiled plans for the central office project in March, proposing the construction of the new office building on the site where Lemon Street High School used to stand at 353 Lemon Street. The project also includes plans for renovation of the Lemon Street Grammar School across the street for use as a new Performance Learning Center.

Prior to school integration in the 1960s, Marietta’s black student population attended Lemon Street Grammar School before heading across the street to Lemon Street High School. The high school building was razed in 1967. The grammar school closed in 1972 and has since been used for storage.

Gardner said the contract in question allows Parrish Construction to begin initial design work and planning with the project’s architect and return to the board for approval of a guaranteed maximum price for the entire project. That proposal will likely come in February or March, he said.

The district has budgeted about $8.6 million from a building fund for the project, which will include a new school board meeting room, community space and museum, but the district is hopeful the cost will come in under that budget, Gardner said.

In other business, the board approved review and revision of policies regarding professional learning, leave and absence and dress code; and a list of requested field trips for Marietta schools.

The board also placed the following items on its consent agenda to be approved at its Sept. 17 regular meeting:

♦ Renewal and upgrade of website services with Blackboard, Inc. totaling $60,844;

♦ A $28,000 contract for a partnership between Hickory Hills Elementary School and Columbia University for professional development;

♦ An annual application and $72,962 required match for Career, Technical and Agricultural Education funding;

♦ An $86,600 contract with Advanced Care Partners for special education nursing services for the 2019-20 school year;

♦ A $614,169.91 contract with Unified to install audio/video equipment in the College and Career Academy atrium, including a sound system, digital signage, displays and video conference capabilities;

♦ Allocation of $115,000 from the charter fund to the Marietta Student Life Center; and

♦ Schedule for school board training.

On Tuesday, the Marietta school board gave seven thumbs up to Superintendent Grant Rivera’s updated plans for renovations to the former Lemon …