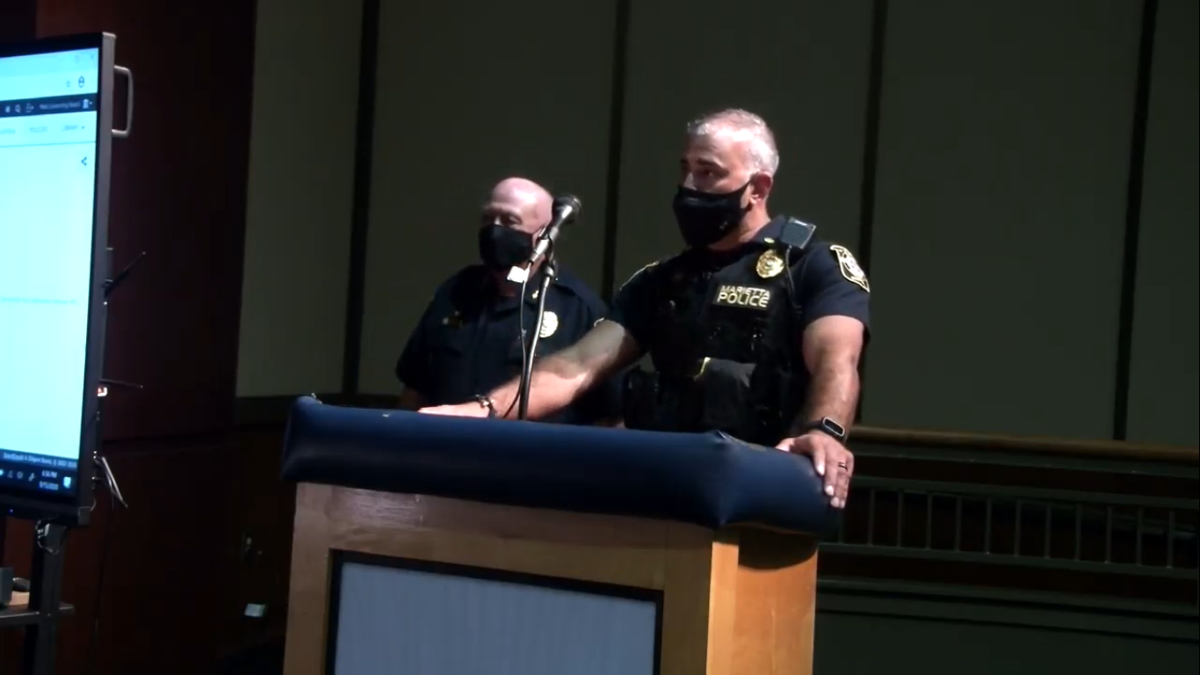 Marietta Police Maj. Jake King speaks at the board meeting on Tuesday, Sept. 15. 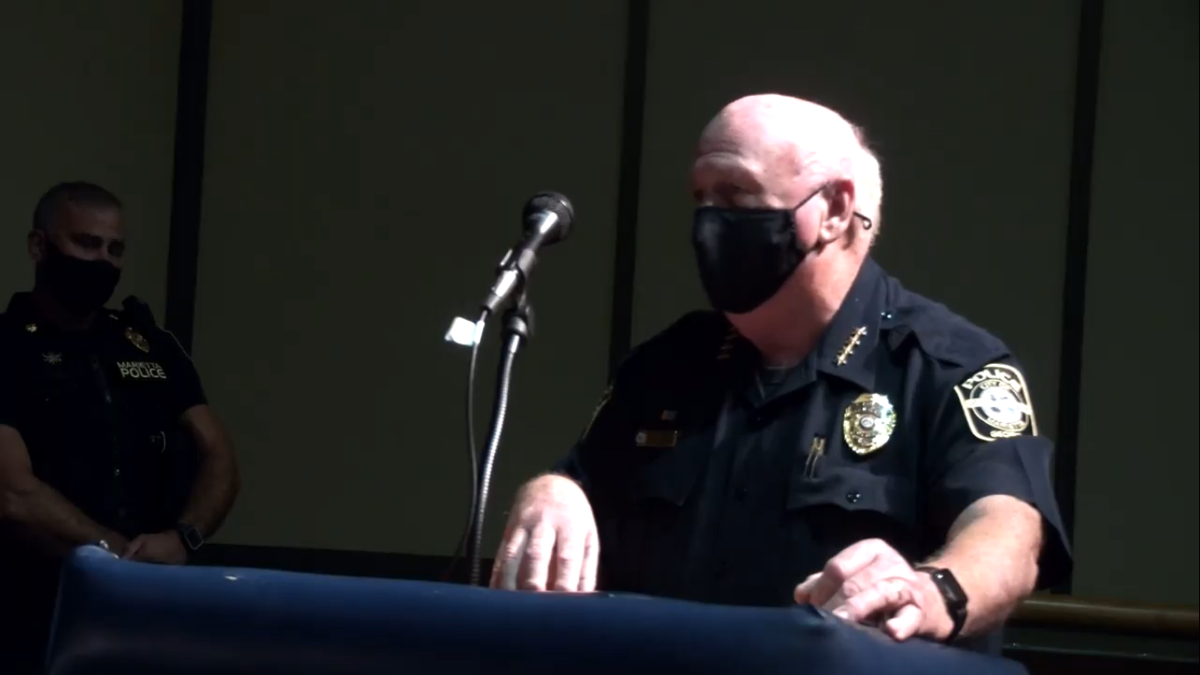 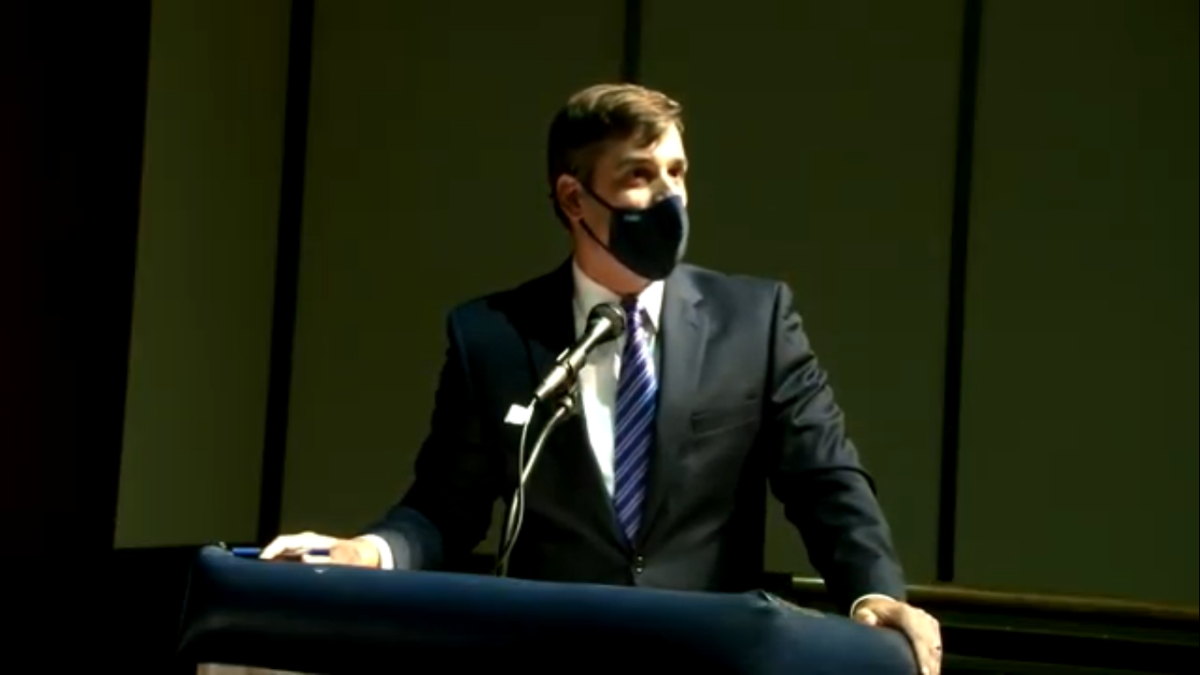 Marietta Police Maj. Jake King speaks at the board meeting on Tuesday, Sept. 15.

Marietta City Schools and the Marietta Police Department may be redefining the role of school resource officers.

In a school board meeting Tuesday night, Marietta Police Department Chief Dan Flynn discussed the partnership with Marietta Schools, saying the district and the department have a strong and longstanding relationship.

According to Flynn, the police department and school district collaborated in the spring to discuss the fall term. During that meeting, held in June amid national unrest after the police killing of George Floyd on Memorial Day, the district and police department conversed on diversity and the role of school resource officers. Flynn referenced the anti-racism protests that swept the nation, noting that such events brought new attention to school resource officers.

Flynn said the district and the police department determined it would be important to ensure school resource officers and school faculty and staff had the same idea of the role of officers in schools.

“We agreed to do a survey,” Flynn said. “(Marietta High School) Principal (Keith) Ball is going to survey faculty and staff and ask them the same set of questions. We’ve already completed it with all of our school resource officers. … We have a meeting scheduled soon, and we’re just going to hammer out, see if there are any differences there.”

The chief said the meeting also led to other changes, such as altering uniforms for school resource officers to be more approachable.

Flynn also condemned acts of police brutality and racism, saying any such actions would not be tolerated in his department.

“The Marietta Police Department is absolutely opposed to, do not condone in any form, any form of racism,” Flynn said. “We do not condone and would not tolerate any form of police brutality, and we are opposed to any form of injustice that may occur at the hands of the police. It is not part of our DNA. Every member of our organization knows that.”

The chief said he would hold officers accountable should they perpetuate racism or brutality against the public.

“We wouldn’t stand by for a minute if any member of our organization were to have any thoughts like that,” he said. “I’d like to unequivocally state where we stand on that.”

Flynn then turned the microphone over to Maj. Jake King, who oversees the school resource officer program. King said Marietta City Schools and the Marietta Police Department have partnered to have officers in schools since 1992. King said officers can play a critical role in school safety by serving as mentors and role models for students.

“By building relationships within the school system, students will communicate more with the officers and actually make it a safer environment for us,” King said.

“With police departments, the issue that we deal with every day is building trust,” he said. “We need to build trust in this environment with students, with teachers, with all of you, and we are absolutely dedicated to doing everything we can do.”

According to Flynn, officers need the community to trust them in order to do their jobs well.

After Flynn and King concluded their presentation, board member Angela Orange asked how school resource officers feel about being involved in disciplinary issues at the school.

“How much should a police officer be involved?” King asked, rhetorically. “More than likely not a whole lot because it’s a violation of a school rule.”

King said the district and police department will continue to meet and clarify officer roles in schools.

“From our perspective and our meetings that we have,” King said, “we are very happy with the school system and our relationship.”

The board voted unanimously, 7-0, to approve a $28,190 purchase for new Apple technology for teachers. As students return to classrooms for face-to-face instruction, teachers are tasked with instructing both in-person students and students who are following along from home. To accommodate this new teaching method, the district is supplying iPads and AirPods to teachers.

The purchase of 50 iPads and 60 AirPods will be directed to certified teachers at Hickory Hills Elementary School to support virtual and hybrid learning.

Would the police chief stand by his officers or leave them by themselves.

Nominations sought for Heart of the Community

A new tradition: Wagon train will fill a void for local riders

County commission, elections board, ACC and Floyd school board to meet early next week