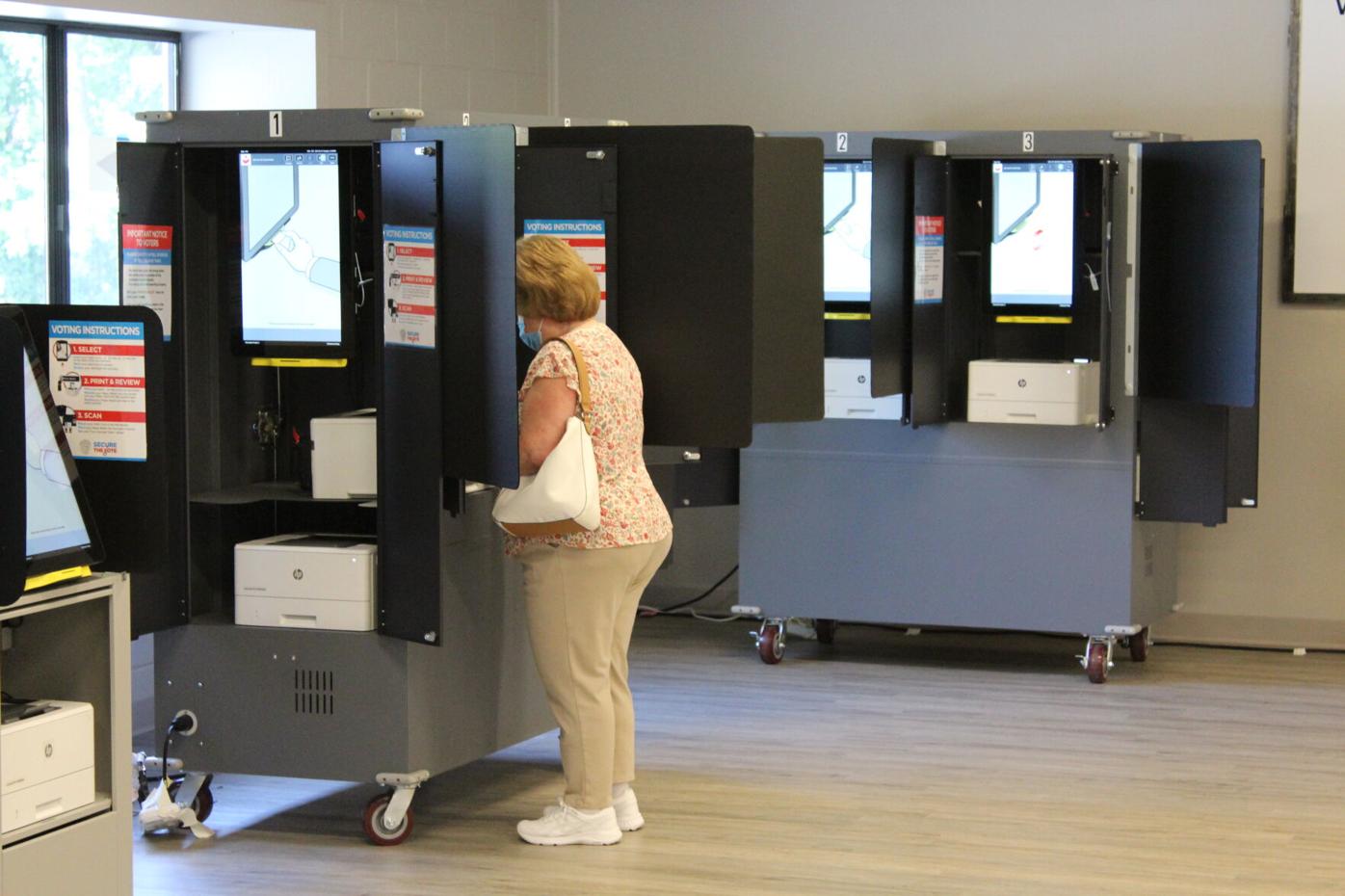 A voter casts her vote at the Mercy Hill Church precinct Tuesday morning. 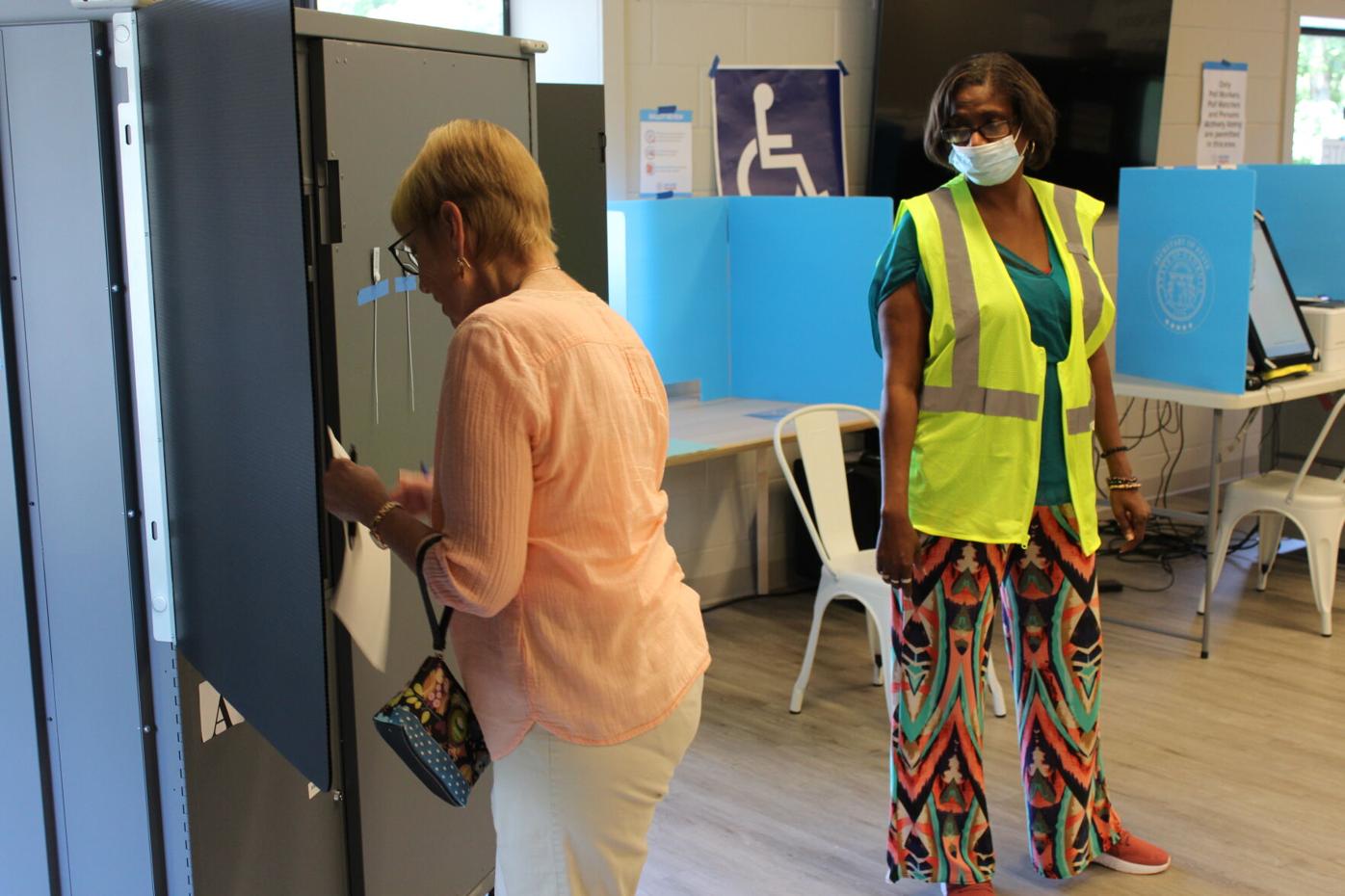 A voter cast her ballot at the Mercy Hill Church precinct Tuesday morning. 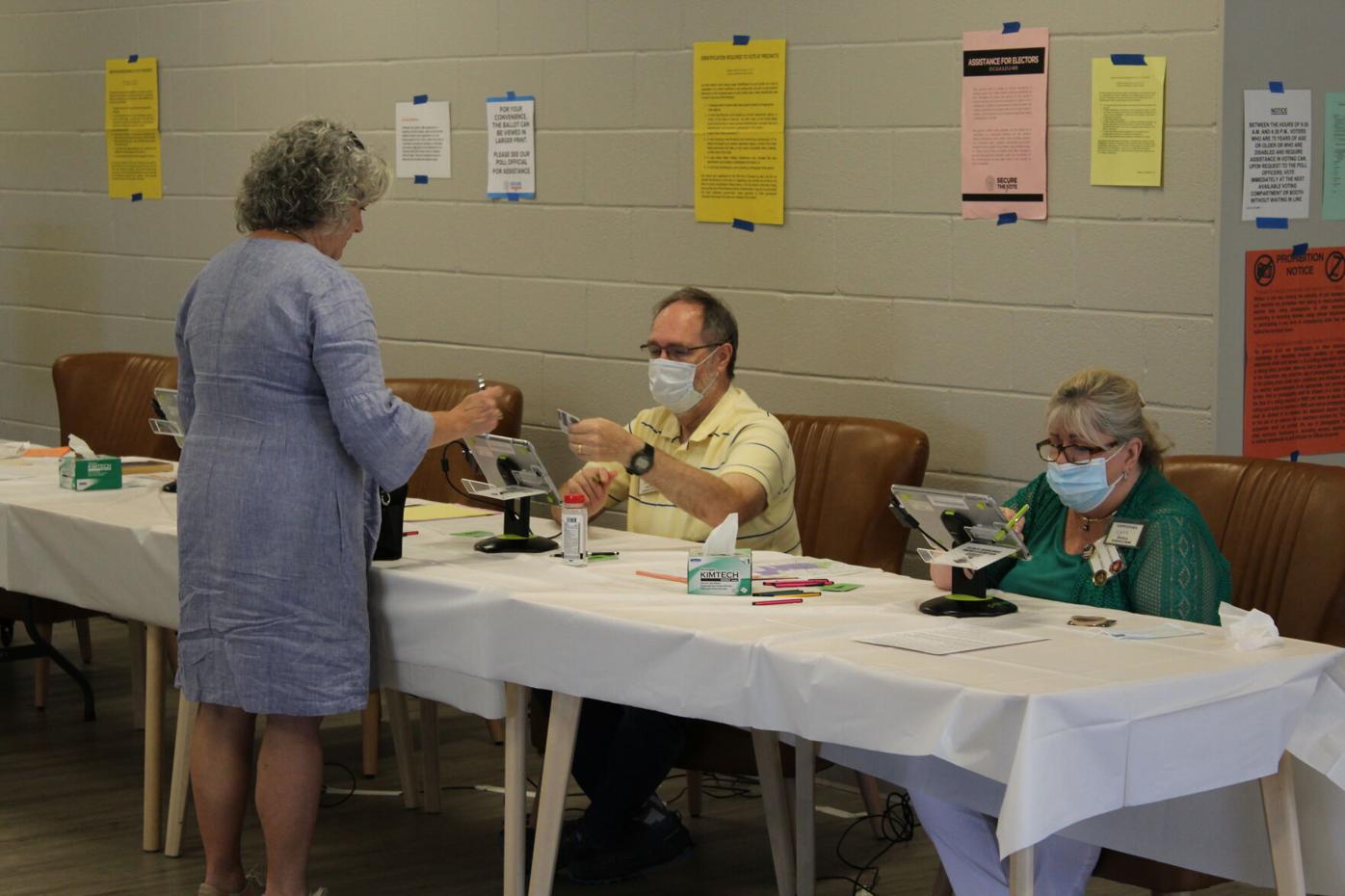 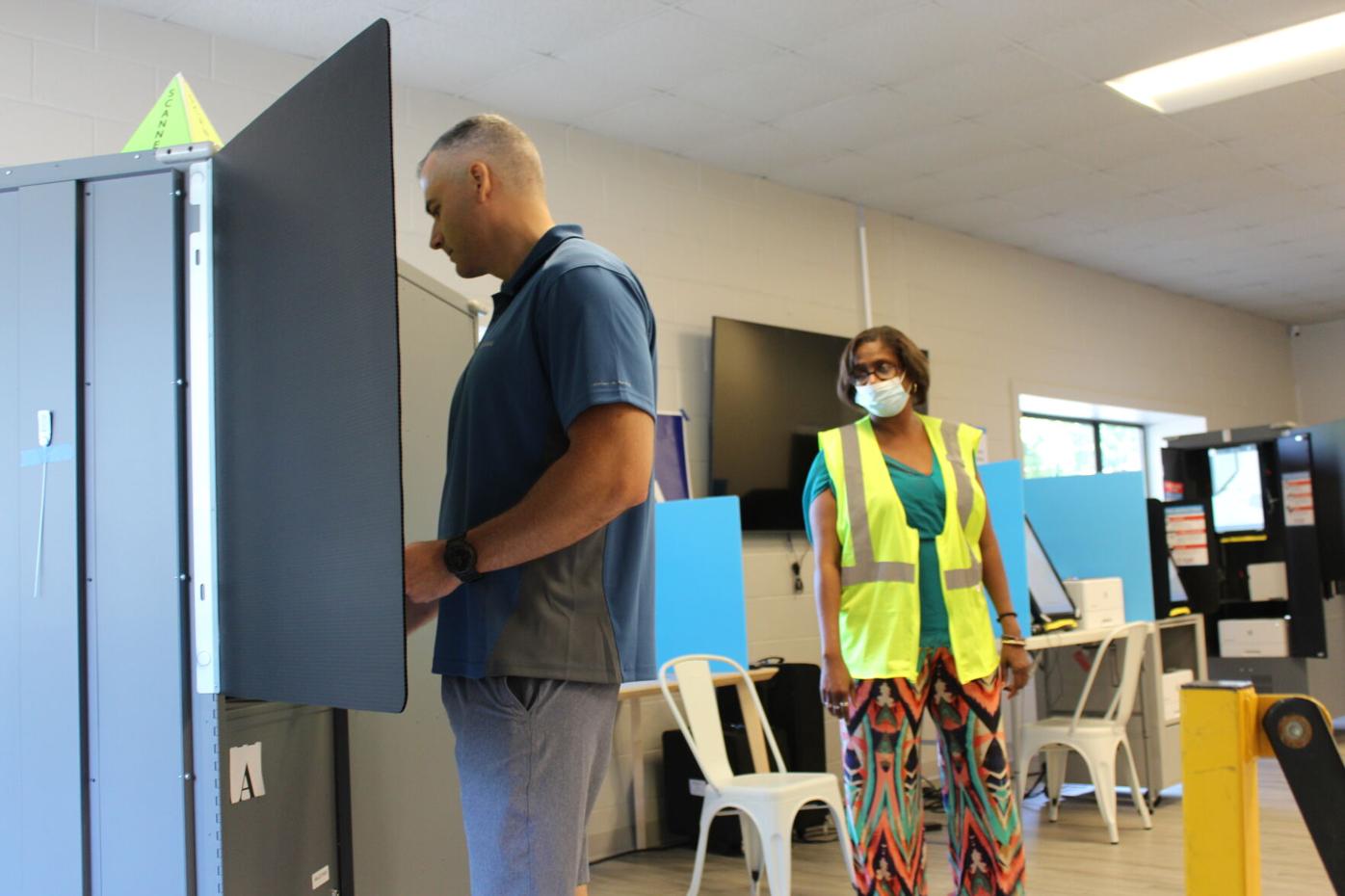 A voter casts his ballot at the Mercy Hill Church precinct Tuesday morning in Marietta. 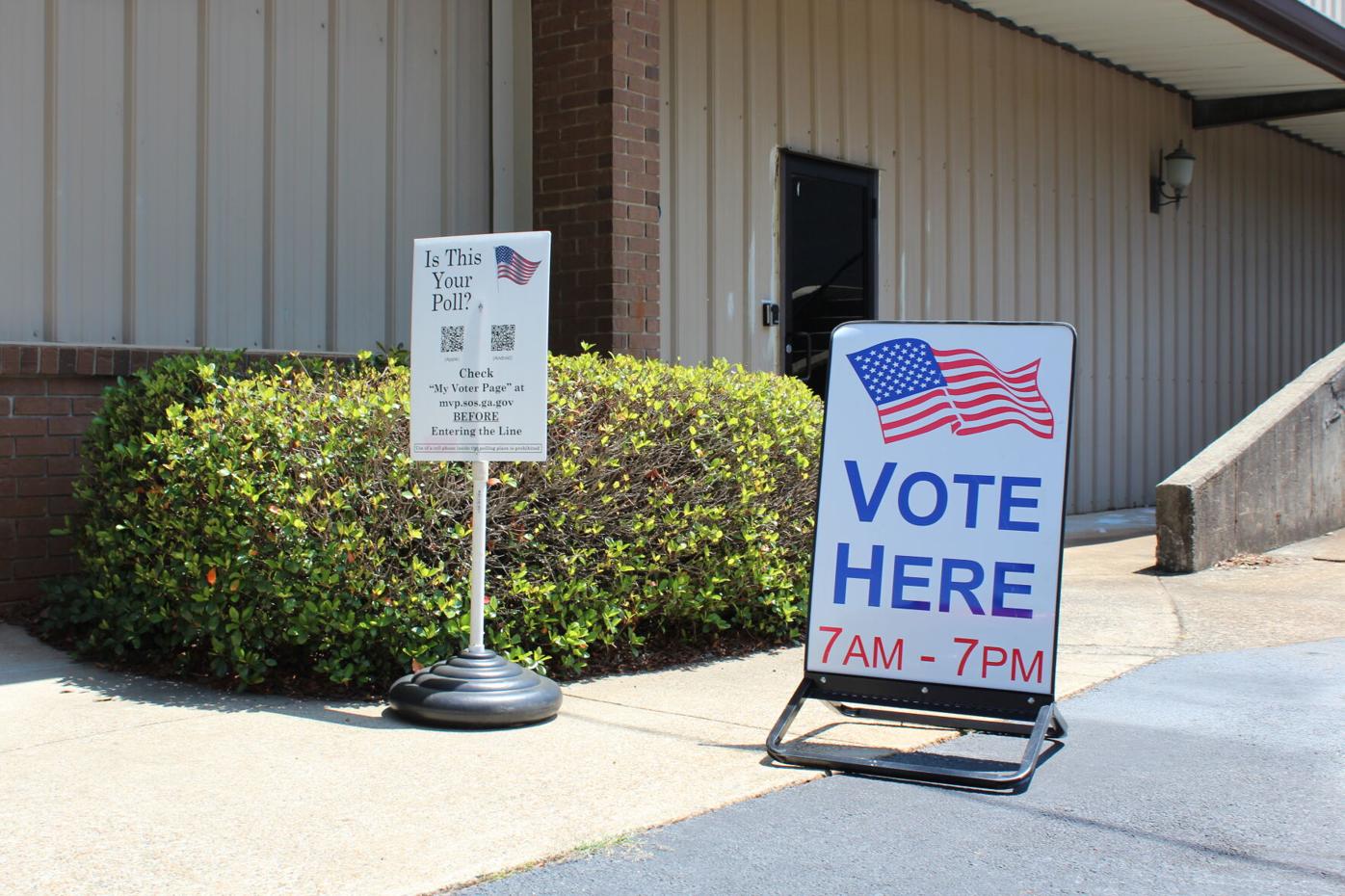 Outside the Mercy Hill Church voting precinct on Tuesday morning. 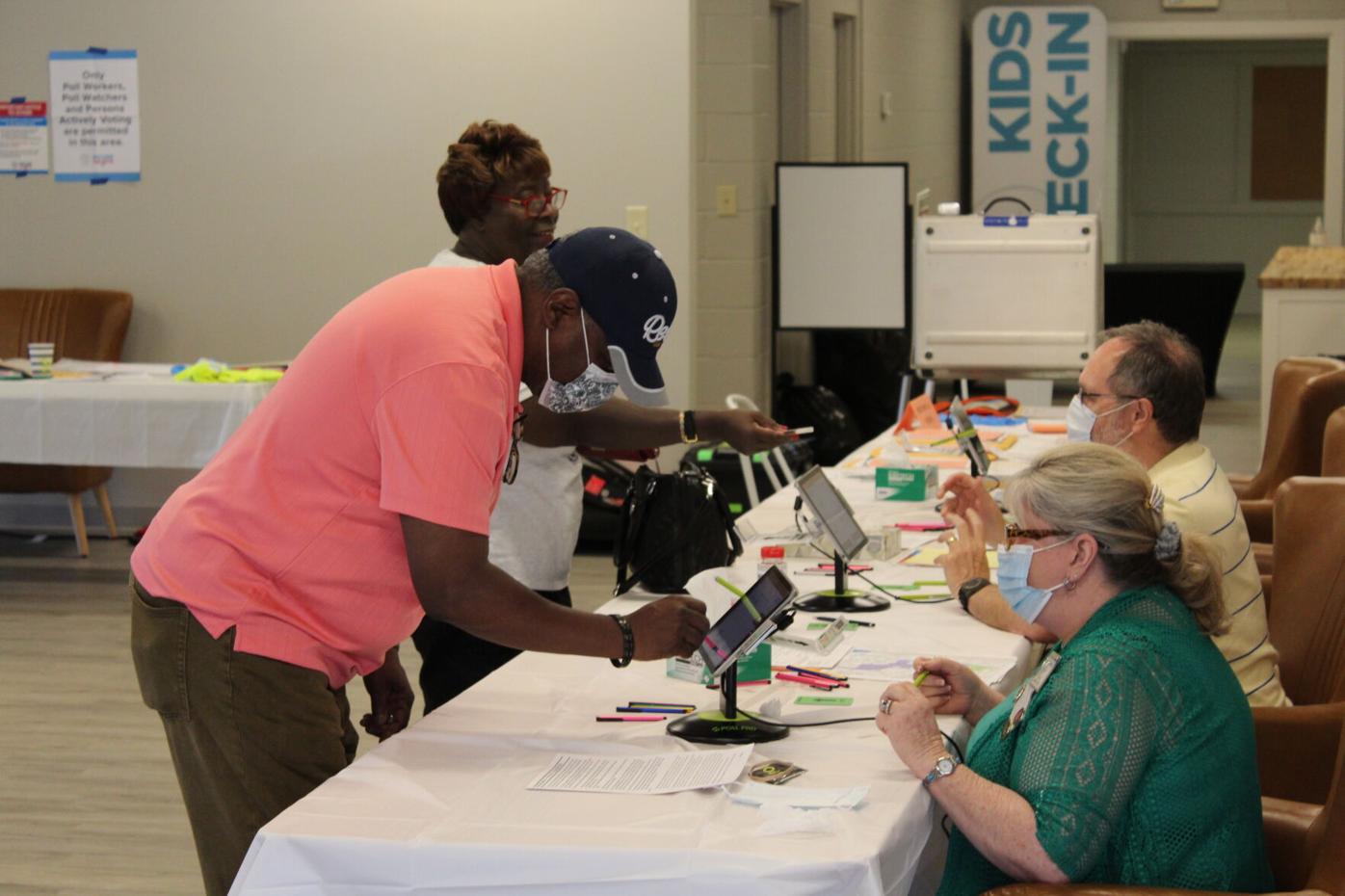 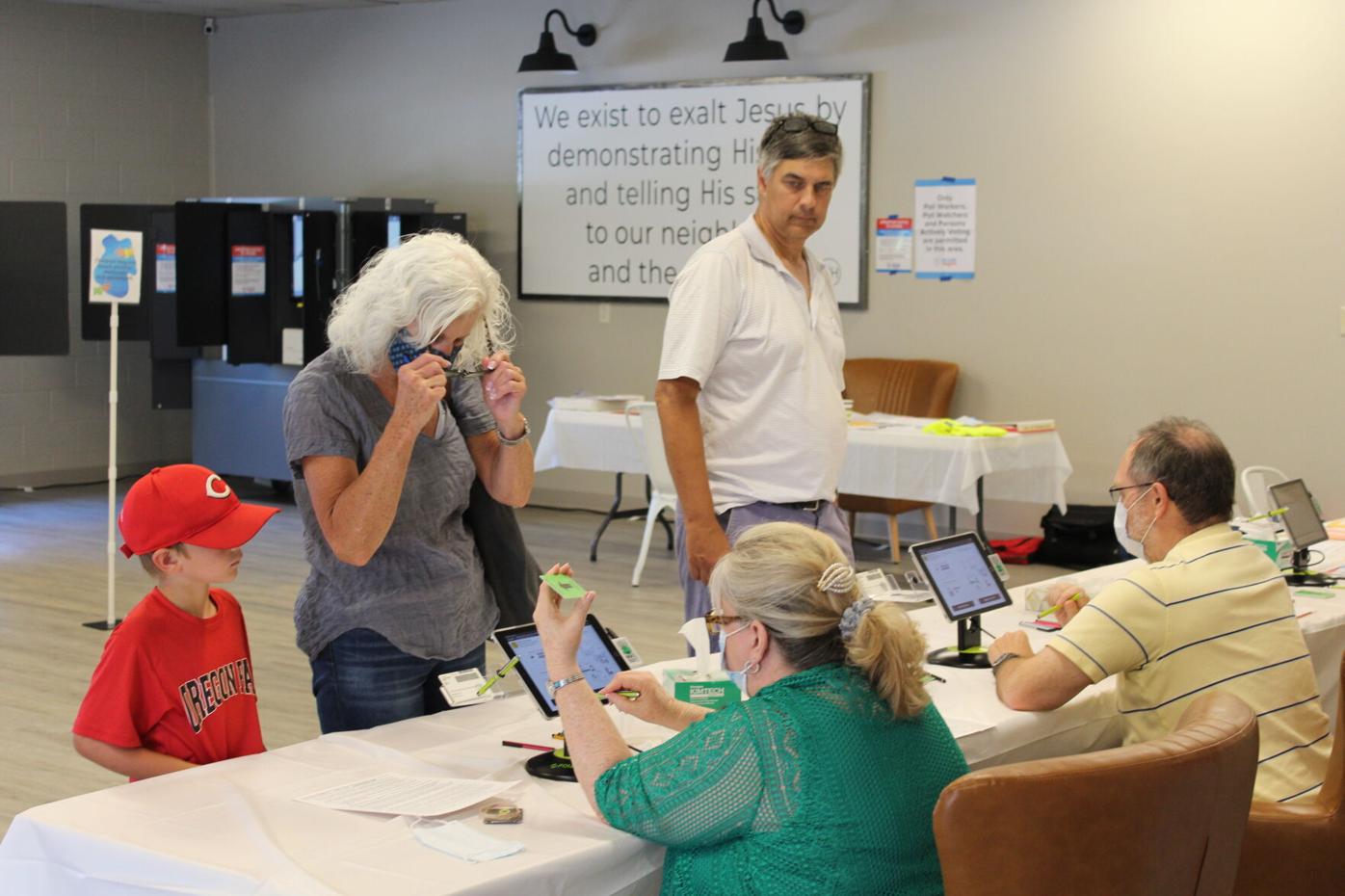 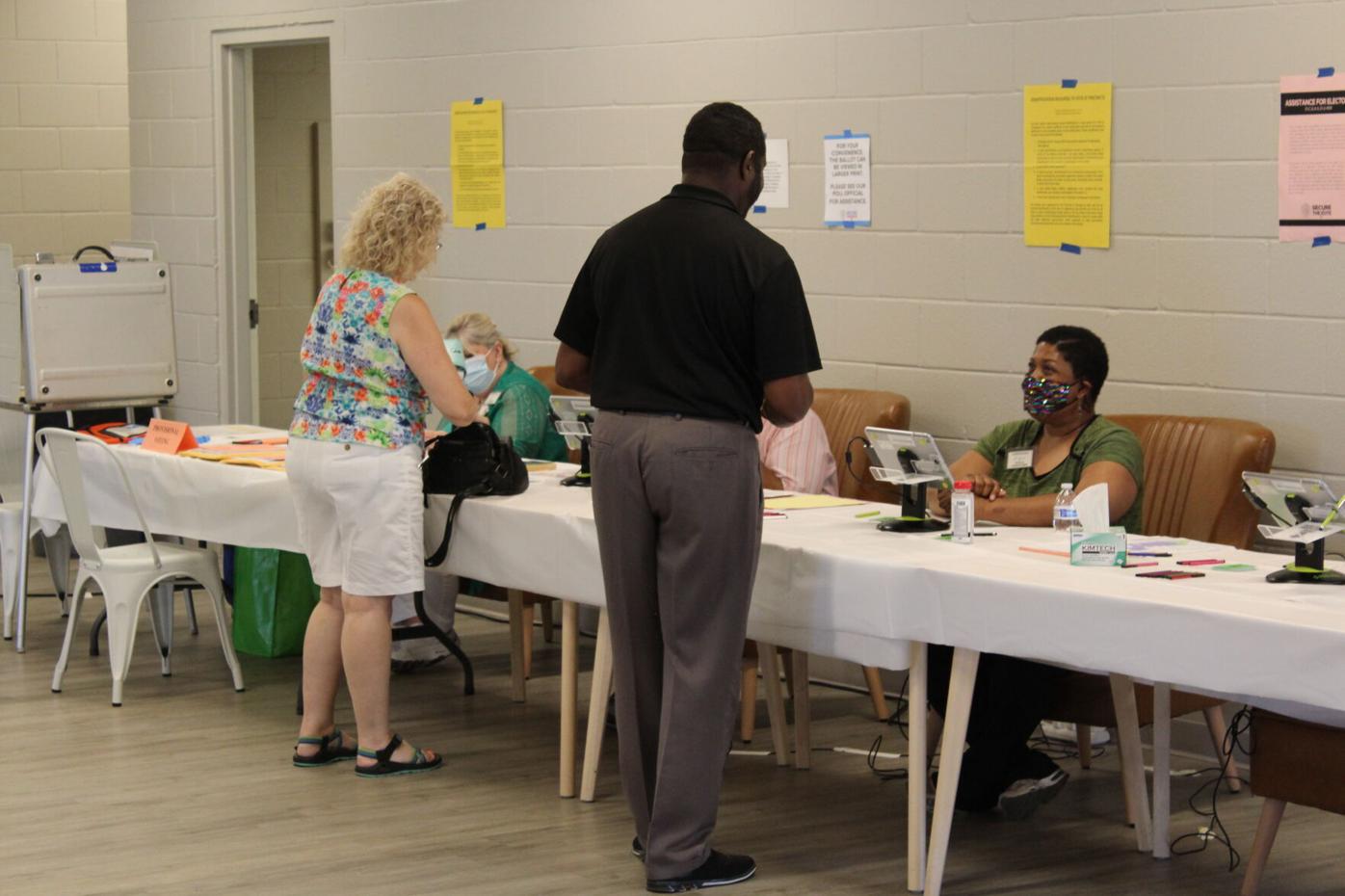 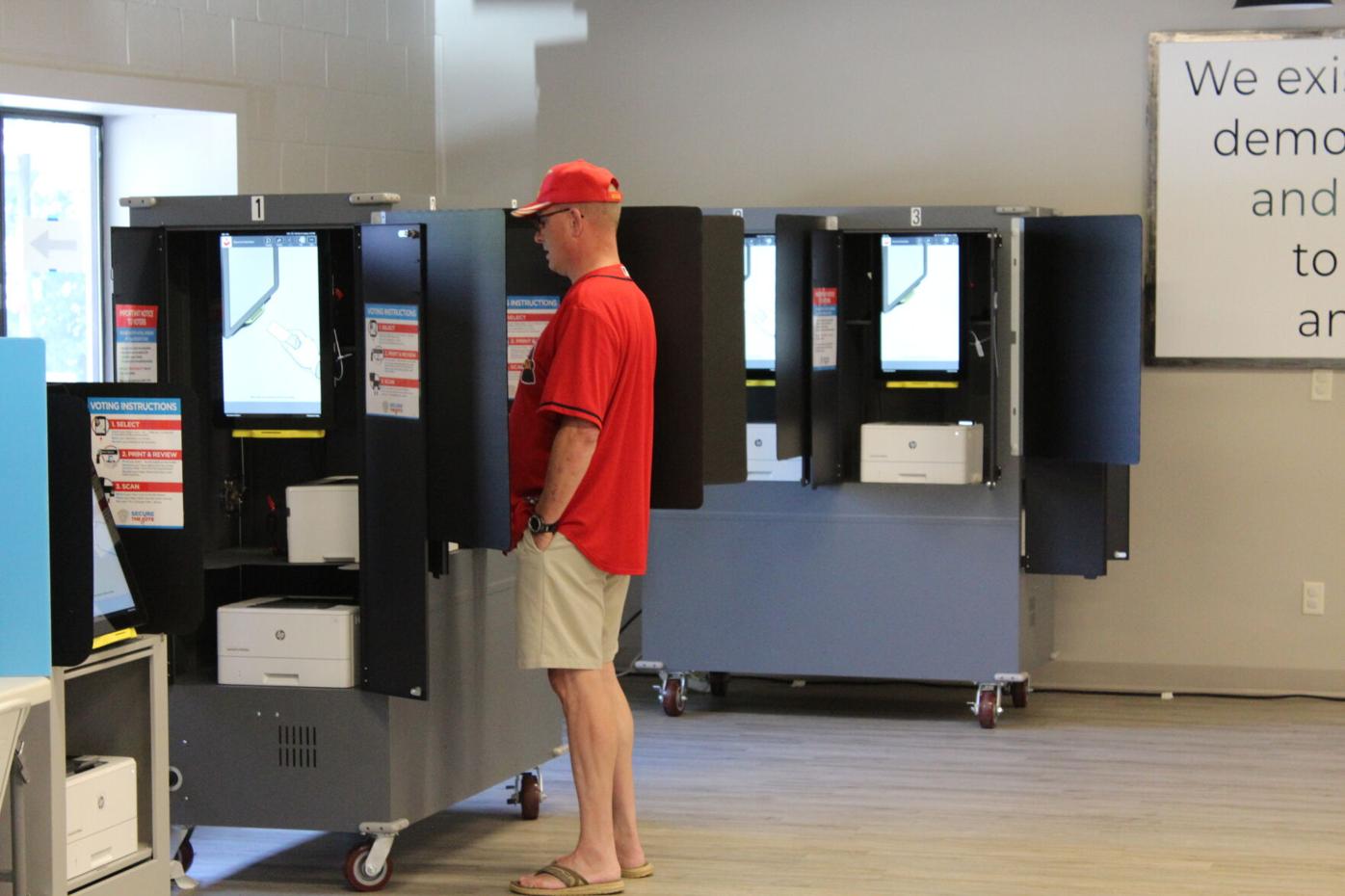 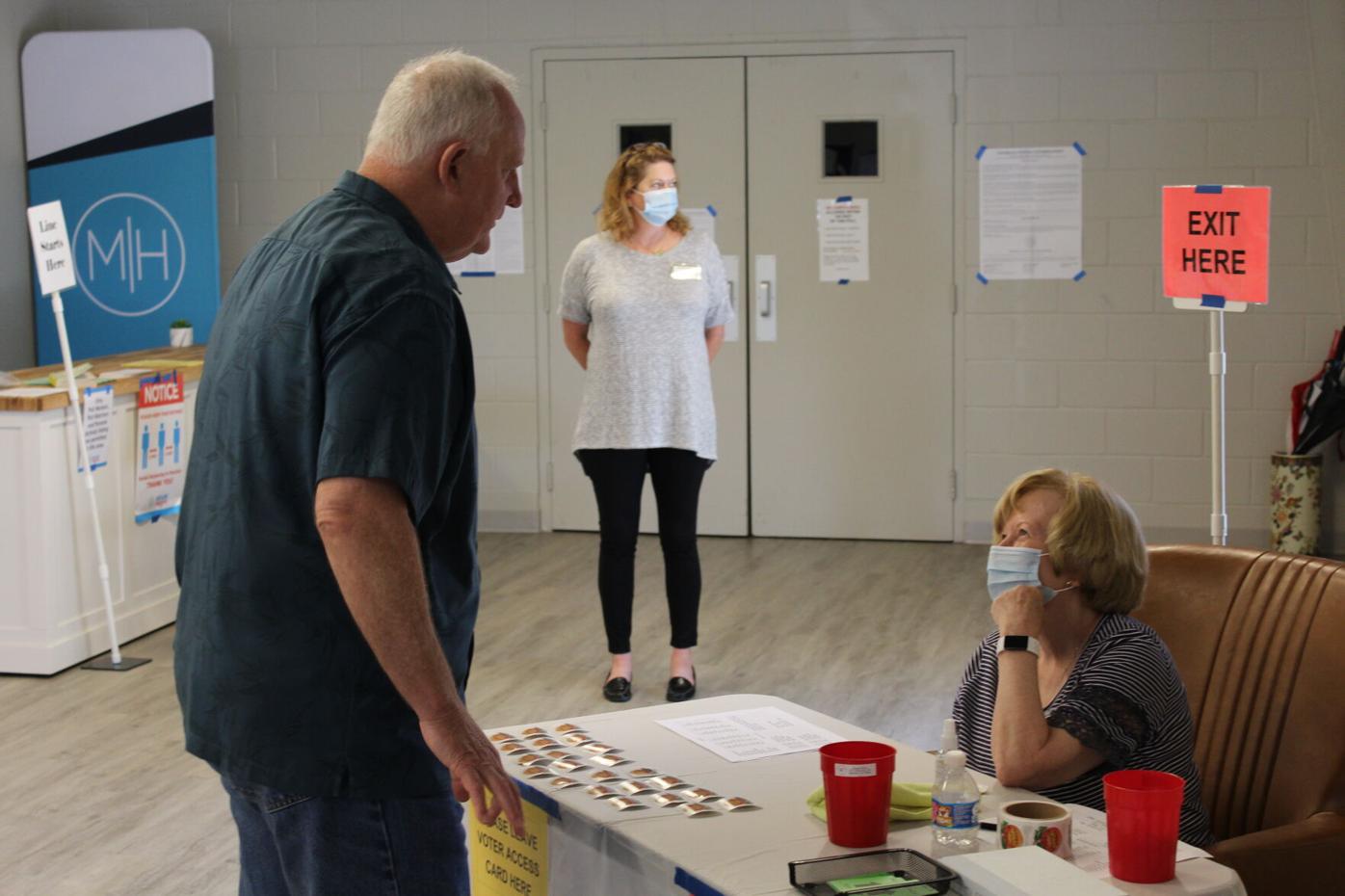 A voter speaks with a poll worker after voting. 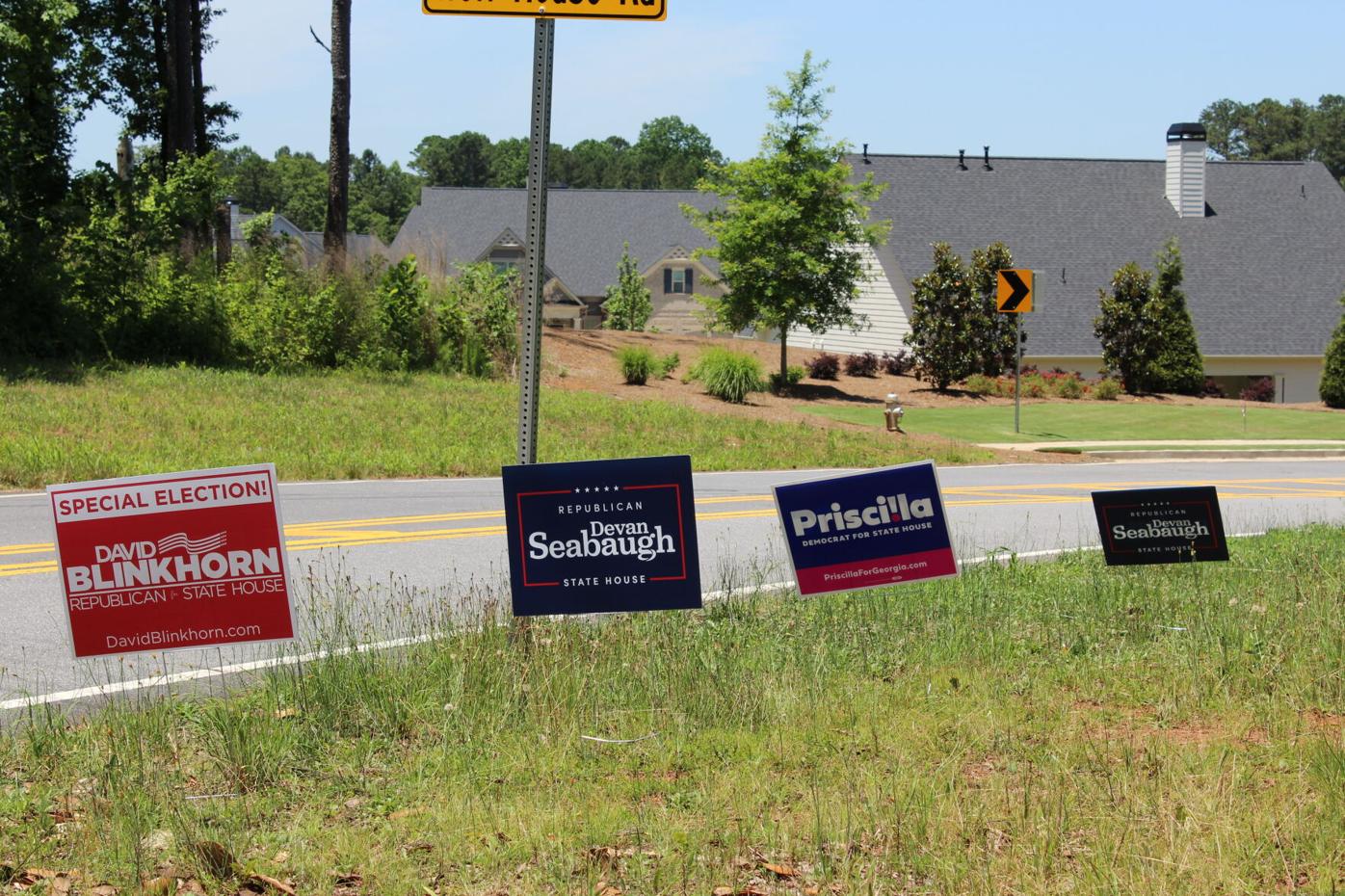 Signs for three of the five candidates in the House District 34 special election near the Mercy Hill Church precinct Tuesday morning.

A voter casts her vote at the Mercy Hill Church precinct Tuesday morning.

A voter cast her ballot at the Mercy Hill Church precinct Tuesday morning.

A voter casts his ballot at the Mercy Hill Church precinct Tuesday morning in Marietta.

Outside the Mercy Hill Church voting precinct on Tuesday morning.

A voter speaks with a poll worker after voting.

Signs for three of the five candidates in the House District 34 special election near the Mercy Hill Church precinct Tuesday morning.

Cobb Election results were not available at press time. Check mdjonline.com where results will be posted as they become available.

The special election was triggered when Reeves resigned to take a high-level job at Georgia Tech. Two Democrats, Priscilla Smith and Sam Hensley Jr.; two Republicans, Devan Seabaugh and David Blinkhorn; and a Libertarian, Chris Neill, were running on one ballot in a “jungle primary.” Unless one candidate received a majority (50% plus one), the race heads to a runoff between the top two.

Jacquelyn Bettadapur, chair of the Cobb Democratic Party, predicted the race would go to a runoff Tuesday. Both she and Cobb GOP Chair Salleigh Grubbs were hesitant to make any predictions about who would ultimately win the seat.

A Democratic win “can happen, but it is a conservative area,” Grubbs said.

Despite Reeves winning reelection last November with 56% of about 30,000 votes cast, the 34th is in play because a special, jungle election is a “completely different animal altogether,” Bettadapur said.

About 2,900 votes were cast during three weeks of early voting. The district has about 42,000 registered voters.

“Of course, you know, you’re always disappointed when the turnout is low,” Grubbs said. “But that’s just the nature of the beast with a special election.”

Bettadapur thought the early vote probably represented half of the total votes and predicted a final turnout of about 6,000. Based on demographic data Democrats analyzed, she believed the early vote was split evenly between parties.

Bettadapur believes the jungle primary system could benefit the Democrats, saying Neill is more likely to peel off votes from the two Republicans.

Grubbs is not a fan of the jungle primary system. Still, she feels “very good” about the work the local GOP has done to boost both of its candidates. The Cobb GOP was still canvassing and making calls on Election Day, she said, with help from Greater Georgia, the group founded by former U.S. Sen. Kelly Loeffler to boost turnout among conservatives.

Bettadapur said most Democratic volunteers had opted to work for a candidate rather than the party — Cobb Democrats canvassed last weekend and held its last phone-banking effort Monday night.

Fair Fight, the Stacey Abrams-led group that Greater Georgia was founded to counter, endorsed Smith in the race.

Smith, who ran against Reeves last November, is known, in part, for dressing up as Donald Trump and parodying him at political events and the state Capitol. In addition to calling her a radical, Grubbs said Smith was “not at all serious … and that’s good for us,” viewing Hensley as more of a threat.

Some observers believe the pair of Republican U.S. senators representing Georgia lost their January runoff election in part because of Donald Trump’s unfounded claims of voter fraud in the state after the November general election.

Grubbs said volunteers have encountered conservatives who were skeptical of the voting system, even after Republicans implemented a sweeping new voting law earlier this year.

“I don’t know the number of people, but that is something that some of the canvassers have told me,” Grubbs said.

Grubbs declined to make any predictions about which GOP candidate was stronger. Among the Democrats, Bettadapur said it was anyone’s guess.

“Priscilla definitely had a campaign machine in place and infrastructure (from the last cycle),” Bettadapur said. “And she just had to flip the ‘on’ switch.”

Hensley is the son of Sam Hensley Sr., who served in the state House and state Senate.

“He’s very well-networked within the community,” Bettadapur said, calling him the establishment pick and adding that “people know him, and there’s name recognition.”

At a precinct at Mercy Hill Church Tuesday morning, lines were nonexistent, but a steady stream of voters filed in and out. Of the eight voters who spoke to the MDJ, four said they voted for Seabaugh, one said they voted for Hensley and three declined to share their choice.

None of the voters could point out a difference from last election, before Georgia’s new voting law was signed. The process was quick and easy for most — one voter had brief trouble getting the machine to accept her paper ballot.

Bettadapur said they wouldn’t have a good idea of the law’s effects until a high-turnout election occurs. Cobb Elections Director Janine Eveler told the MDJ last week that many of the provisions have yet to take effect.

Sandy McIntosh, who pulled the lever for Hensley, felt Hensley was “the better choice for me … seemed a little more moderate, more experienced.” She also had heard good things about him from friends who knew him.

“I stand for the conservative values,” said Melba Dale, who voted Seabaugh with her husband Travis. “I’m hoping he’ll win.”

Travis Dale, a onetime Democrat, said the party had gone too far left and repeated the famous Ronald Reagan quote: “I didn’t leave the Democratic Party, the party left me.”

“(My father) wouldn’t vote for a Republican to save his neck,” Travis Dale said. “I was a Democratic family … there’s a lot of good Democrats, but the whole party as a whole just gone way out.”