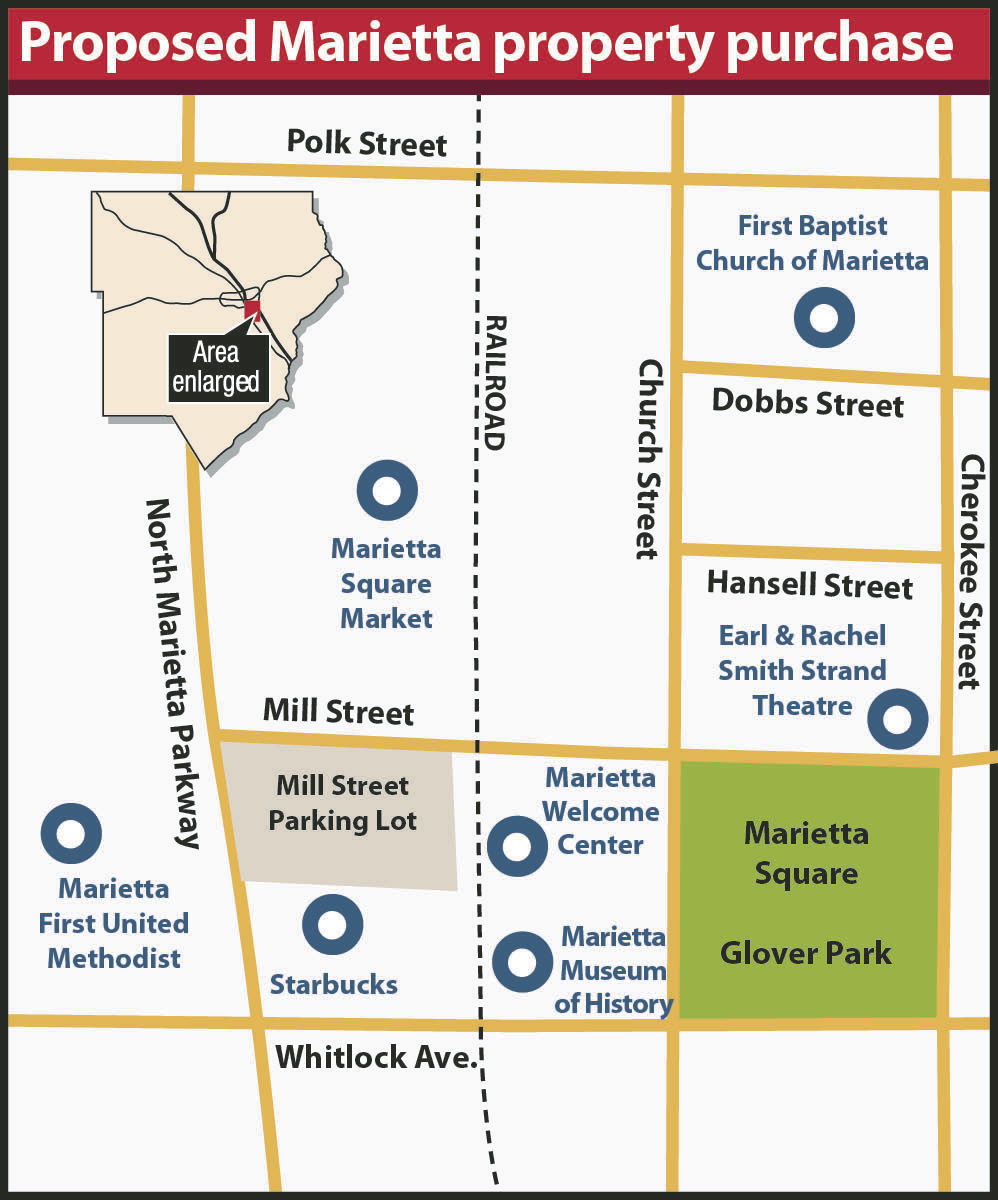 The Mill Street parking lot and old train depot, housing the Marietta Welcome Center, are set to be sold by the state to the city of Marietta and its downtown development authority. 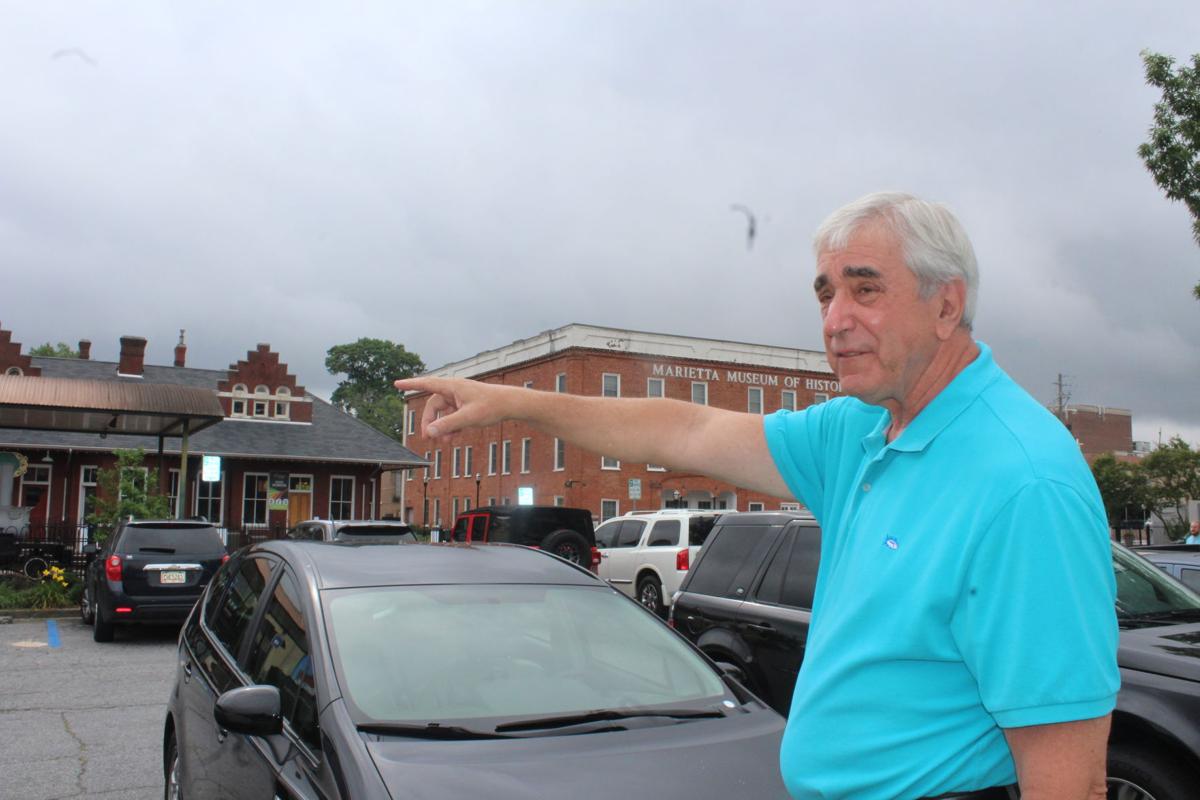 Marietta Mayor Steve Tumlin points out the parking lot beside the Marietta Square Starbucks is likely to be sold by the State Properties Commission to the Downtown Marietta Development Authority by year’s end.

The Mill Street parking lot and old train depot, housing the Marietta Welcome Center, are set to be sold by the state to the city of Marietta and its downtown development authority.

Marietta Mayor Steve Tumlin points out the parking lot beside the Marietta Square Starbucks is likely to be sold by the State Properties Commission to the Downtown Marietta Development Authority by year’s end.

Marietta looks set to be delivered a Christmas present this year from the state, in the form of two properties off Marietta Square that the city and its development authority have been leasing for years.

Marietta Mayor Steve Tumlin said Tuesday the Mill Street parking lot beside the Marietta Square Starbucks is likely to be sold by the State Properties Commission to the Downtown Marietta Development Authority by year’s end.

The state commission, due to meet at the state Capitol on Dec. 12, is intending to put the property sale on its agenda for its end-of-year meeting, Tumlin said, with a price tag of $167,713.

The state also intends to sell the old train depot building, currently housing the Marietta Welcome Center, to the city for $81,112, according to Tumlin.

“Good news,” Tumlin announced in an email to Marietta City Council members, city staff and media Tuesday. “As discussed to this possible purchase, the mayor is to send out a letter of interest by the city as to the depot purchase so that the State Properties Commission can add these two surplus properties to their December agenda. This is not a binding offer but an expression of interest so it can be placed on the commission’s agenda.”

Morgan Smith-Williams, director of marketing and communications for the commission, confirmed Tuesday that Tumlin's letter of intent to purchase had been received and was the subject of a draft agenda item for the board's December meeting.

"We are doing our due diligence before we go to the commission asking them to approve the sale," she said, adding that the agenda will be finalized 10 days before the meeting.

Speaking to the MDJ on Tuesday, Tumlin said the state was being “very gracious” in its asking prices for the properties, which he said were each based on at least two market appraisals, as per state policy.

Previous requests and expressions of interest to purchase the properties from the state were not as welcomed by former Gov. Nathan Deal, who sought to keep the land in case of future passenger rail developments between Atlanta and Chattanooga. But Gov. Brian Kemp, who chairs the State Properties Commission, has been more receptive.

“We contacted the governor’s office,” Tumlin said, adding that discussions were had between Marietta and state officials over several “breakfasts here and there.” “We asked if they’d ever be interested in selling the parking lot and they called back.”

Tumlin said Kemp saw no reason for the state to own a parking lot and an old train depot in Marietta, and suggested the latter also be sold.

“I was very tickled with the governor,” Tumlin said. “I’m proud of him.”

Tumlin said the Downtown Marietta Development Authority currently pays a “nominal fee” to the state to lease the public parking lot off Mill Street, which the city administers and collects fines from.

Tumlin said $167,000 is good value for the parking lot, which is free to use for the first two hours.

The old train depot, across the railroad tracks from the parking lot next to Kennesaw House, was built in 1864 but burned down in the Civil War and was rebuilt in 1898.

Tumlin said the building is a “treasure” and its use won’t change unless the city decides in the future something else would better occupy the property, in which case the welcome center would be relocated elsewhere.

He intends to keep the Mill Street parking lot for its current purpose, but is not sure whether a multistory parking deck will be built there, given the cost, an idea he’s gone back and forth on for years.

“It’s about $20,000 per parking space if you go high rise,” Tumlin said. “As of right now there’s no deck planned; it’s still a long way from a deck being constructed. Right now these are more just long-term investments.”

A previous city plan for a 400-space parking deck at the site was priced around $4.5 million.

Tumlin sent his letter of interest in regards to buying the old train depot to the state commission Tuesday and thanked in his email those who have been instrumental in reaching this point, including Kemp’s staff, the Cobb Legislative Delegation and Tom Browning, DMDA chairman.

“Please look forward to a special called meeting to purchase said depot before the November committee meetings,” Tumlin said. “Notice of such to follow.”

The special called meeting, at which Marietta council members will vote whether to purchase the old train depot, is set for Nov. 26 in City Hall around 5 p.m. before scheduled committee meetings, Tumlin said.

For years, Marietta’s elected officials have bandied about the idea of building a new multistory parking deck in the city center, but the question of location has always been an issue.

The 80-space Mill Street parking lot is located on the west side of the Square, near the Marietta Square Market, which comprises 20 restaurant and retail merchants and has put a strain on parking in the immediate area.

The lot is bordered by the Starbucks on the corner of Whitlock Avenue and North Marietta Parkway, as well as by Whitlock Avenue, Mill Street and the old railway tracks, on the opposite side of which is the Marietta Museum of History.

The city already owns a smaller parcel adjacent to the Mill Street parking lot, situated behind the Starbucks, that is used for museum parking.

In June, Tumlin spoke to the MDJ about the benefits of building a parking deck on the Mill Street site.

“A deck is coming one way or the other, and this would be the prime location, I think,” Tumlin said at the time. “There’s a general consensus that it would be the best spot for one to go up. It wouldn’t block the view of the mountain, and think it would be very compatible with the Square to have a multistory deck there.”

Festive fundraiser kicks off in Marietta Square on Saturday

A monthlong countywide fundraiser to help Cobb’s most vulnerable residents over the holiday season is kicking off in Marietta Square this weekend.

A Douglasville man, arrested in Powder Springs on charges of possessing methamphetamine, was also found to have heroin in his shoe and a syrin…

Cobb has over 800 unvaccinated students and 11 confirmed measles cases

More than 800 school students in Cobb are unvaccinated on religious grounds, according to data from the Cobb and Marietta school districts.

Breakfast at the iconic Marietta Diner comes with a TV crew Thursday when Fox News will be broadcasting live from inside the restaurant.