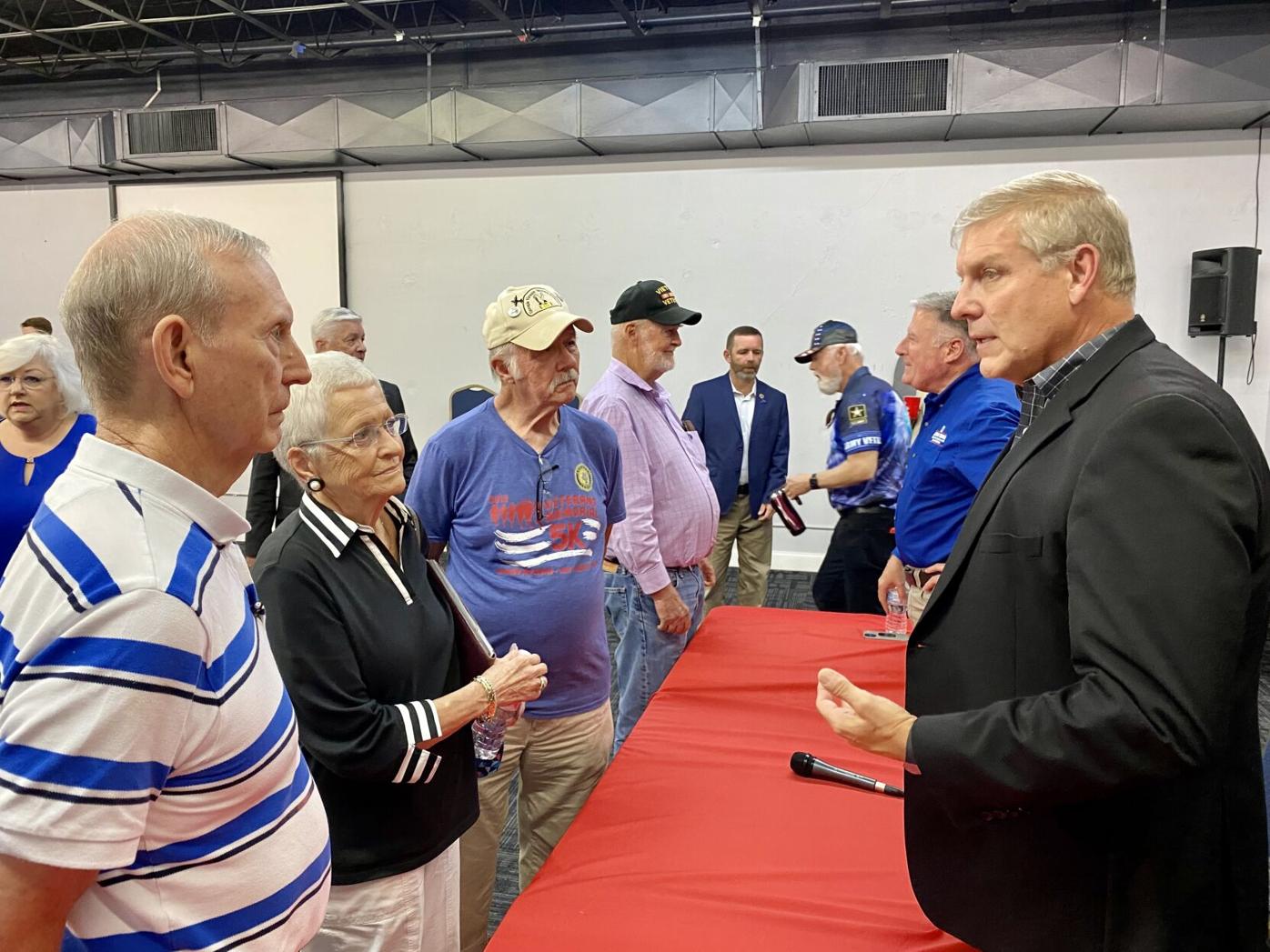 U.S. Rep. Barry Loudermilk, R-Cassville, speaks with three Vietnam veterans, from left: Gerald DeMocko of west Cobb, Donna Rowe of east Cobb and John Bevich of Acworth. Loudermilk met with veterans at the Cobb GOP headquarters about the fall of Afghanistan on Saturday. 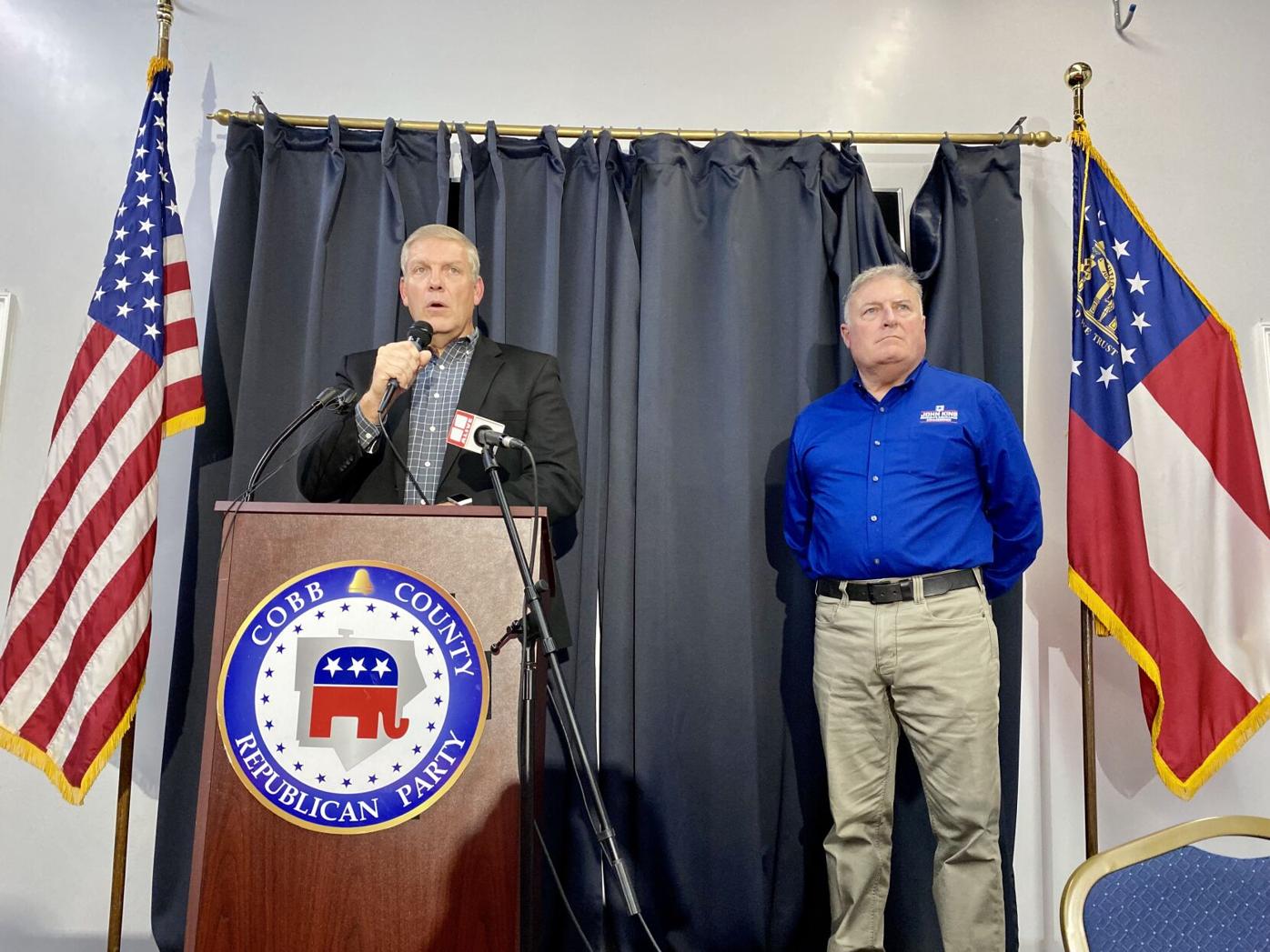 U.S. Rep. Barry Loudermilk, R-Cassville, and Georgia Insurance Commissioner John King, a major general in the U.S. Army National Guard who served in Afghanistan, met with local veterans to talk about the botched withdrawal from Afghanistan at the Cobb GOP headquarters on Saturday.

U.S. Rep. Barry Loudermilk, R-Cassville, speaks with three Vietnam veterans, from left: Gerald DeMocko of west Cobb, Donna Rowe of east Cobb and John Bevich of Acworth. Loudermilk met with veterans at the Cobb GOP headquarters about the fall of Afghanistan on Saturday.

U.S. Rep. Barry Loudermilk, R-Cassville, and Georgia Insurance Commissioner John King, a major general in the U.S. Army National Guard who served in Afghanistan, met with local veterans to talk about the botched withdrawal from Afghanistan at the Cobb GOP headquarters on Saturday.

MARIETTA — Any enlisted service member knows that in withdrawing your forces from enemy territory, first withdraw your military hardware, then your citizens and allies and finally your soldiers, sailors and Marines, U.S. Rep. Barry Loudermilk, R-Cassville, said during a Saturday news conference.

“What we have seen happen in Afghanistan is the exact opposite,” Loudermilk said, noting that the Taliban now has more Black Hawk helicopters than Australia.

“They have missile systems, they have other defense systems that very well could be compromised by our enemies.”

Loudermilk and Georgia Insurance Commissioner John King, a major general in the U.S. Army National Guard who served in Afghanistan, held a private discussion with veterans representing different American wars before the news conference at the Cobb Republican Party headquarters.

When the Taliban began moving on Afghanistan’s population centers, Loudermilk said many in Congress called on President Joe Biden to send in the Air Force and Navy with airstrikes to repulse them so that civilians could be extracted.

“We were met with silence,” he said.

During a Friday press conference, the Biden administration said anyone who wants to come to Kabul’s airport can get there, Loudermilk said. A few minutes later, the secretary of defense informed him on a conference call that Americans had been attacked and beaten, their passports taken, for trying to get to the airport.

He asked why the U.S. wasn’t sending its forces outside the airport wire to bring Americans home as the French and British were doing. First he was told the U.S. doesn’t have the capability to do that. Then he was told the Taliban hadn’t given permission.

“I didn’t know that we answered to the Taliban,” Loudermilk said.

There is frustration and anger among America’s veteran community in watching how Americans and Afghan allies were left behind.

“Many already are being executed. The Taliban is going door to door looking for those who assisted us. I personally know of some who are in hiding right now that we are trying to get out of that country, and they feel that America has failed them,” Loudermilk said. “That breaks my heart for those people, but it infuriates me that the president of the United States would ignore the advice of his military, of the intelligence community and even of those within the state department in Afghanistan that if you took this action, this would be what would happen.”

The congressman said Saturday he’s called upon the president multiple times to expand the green zone beyond the Kabul airport and send in special operations to extract U.S. citizens and allies.

King was deployed to Afghanistan in 2010-2011, where he was assigned to work with the Afghan National Police. The messages he and other Georgians who served have been receiving from Afghans asking for help in getting their families out of the country has been sobering.

“I’m getting calls since last week from Afghan policemen that I served with who protected me for a very long time, begging me,” King said. “They know there is not a good chance for them to come out, that if they get arrested by the Taliban, they’re going to get killed. They’re just begging me to get their daughters out. As a father, it breaks my heart getting those messages. It’s a gut punch.”

The U.S. has a moral obligation to get its Afghan partners to safety along with the Americans who are still there, King said.

Biden has blamed the Trump administration’s 2020 peace deal with the Taliban as the reason the country fell so quickly, an argument Loudermilk called both hypocritical and disingenuous.

“If he was bound by what President Trump had set in place we wouldn’t have 1.4 million illegal aliens crossing the border today,” Loudermilk said. “We would not have empowered Russia to build a pipeline, but shut down a pipeline in the United States of America. We would not be having rampant inflation that we have right now. These are policies that immediately upon getting into the White House through a historical record of executive orders undid Trump policies specifically because they were Trump policies. I think it’s hypocritical to say ‘Well, in this instance it was a Trump policy we couldn’t get out of.’ No, in fact, Trump negotiated with the Taliban. As soon as the Taliban broke that agreement we changed the priorities.”

Loudermilk said he’s been asked if Trump were in office today would the same result have occurred.

“No,” he said. “Because President Trump would have done exactly what I said: listened to his military leaders, remove your hardware. Those things that you can’t take with you, you destroy and keep them out of the hands of the enemy. Second of all, you don’t immediately withdraw your troops.”

One of the reasons that the Afghan army failed to respond to the Taliban, Loudermilk believes, is because the U.S. abandoned them.

“You can leave a leadership force, an air strike force, you can leave a smaller force in place to support the main force of the Afghan army. But we basically abandoned them, that’s why they disbanded. And here’s the other aspect. The Taliban feared Donald Trump. Because he had shown proof that although we are the most powerful military force in the history of the world, you got to show that you will use it, and he showed many times over that if you mess with the U.S. you’re going to feel the pressure of the United States military."

By contrast, Loudermilk said Biden has shown nothing but weakness.

“When the Taliban was moving he should have launched air strikes to at least slow them down to allow us to get our folks out before they hit the population center of Kabul,” Loudermilk said. “These are types of things that Donald Trump — and I’m not trying to read his mind even though he said this is what he would do in an interview earlier this week — historically he has shown this is the action he would have taken. So no, that is hypocrisy and it’s disingenuous for the president to try to lay the blame at the feet of Trump when he has summarily undone everything else that Trump has done.”

As for what action he planned to take in Congress, Loudermilk said what is happening now is under the authority of the executive branch. This week expect bills to come to the floor designed to get people out and allocate funding to that end, but they have to pass the House, Senate and be signed by Biden before they go anywhere.

“Right now our focus needs to be on getting those American citizens and those aligned Afghans out of the country and into safety. We can deal with politics down the road, but right now that has to be the priority of every person in Congress and every American. Get our people home.”

Among the veterans in attendance was Donna Rowe, who served as the head nurse of the Third Field Hospital in Saigon from 1968 to 1969.

Loudermilk is full of it. Nice puff piece article that challenged none of the lies Loudermilk is spewing. Do your own research.