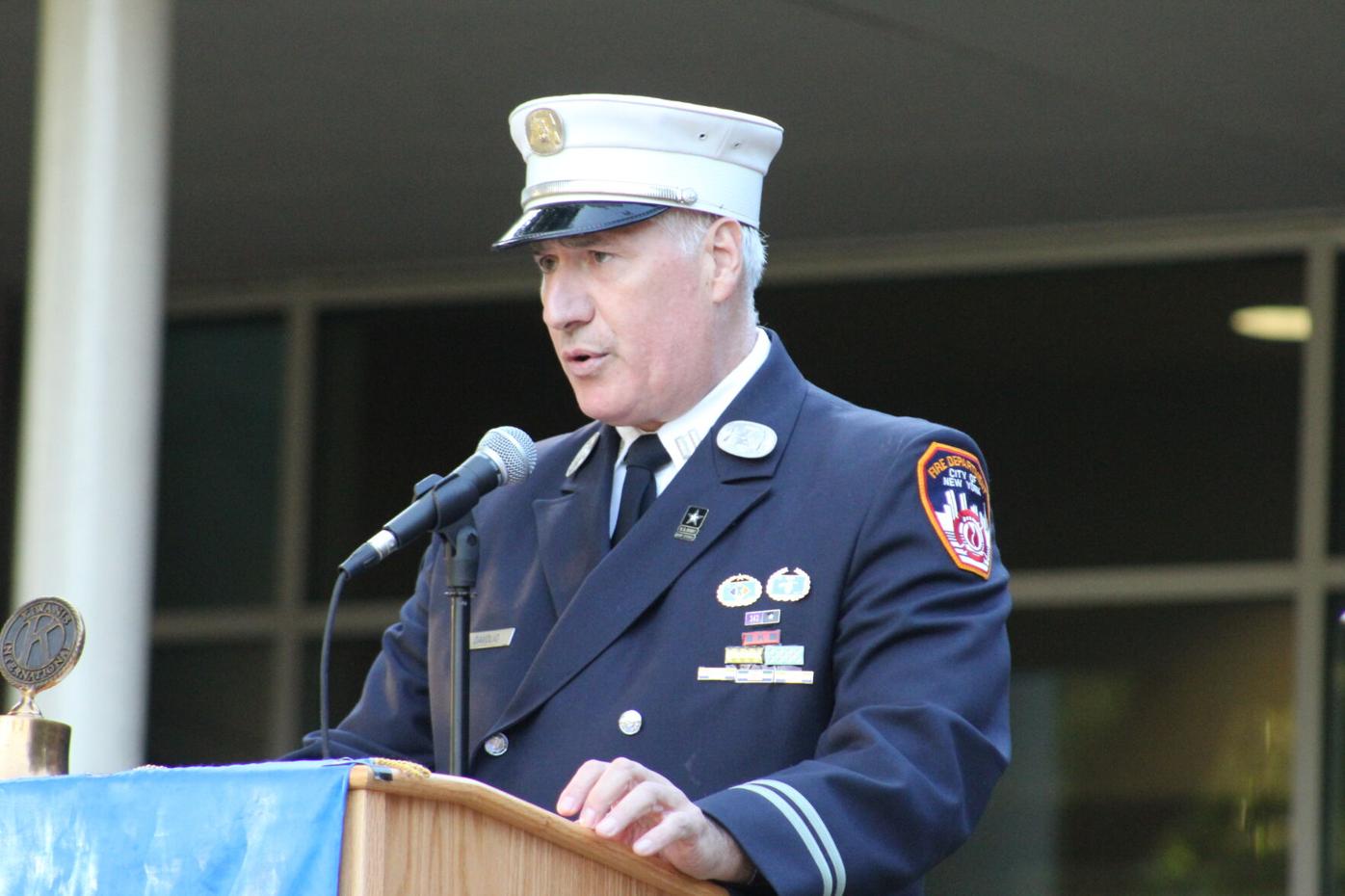 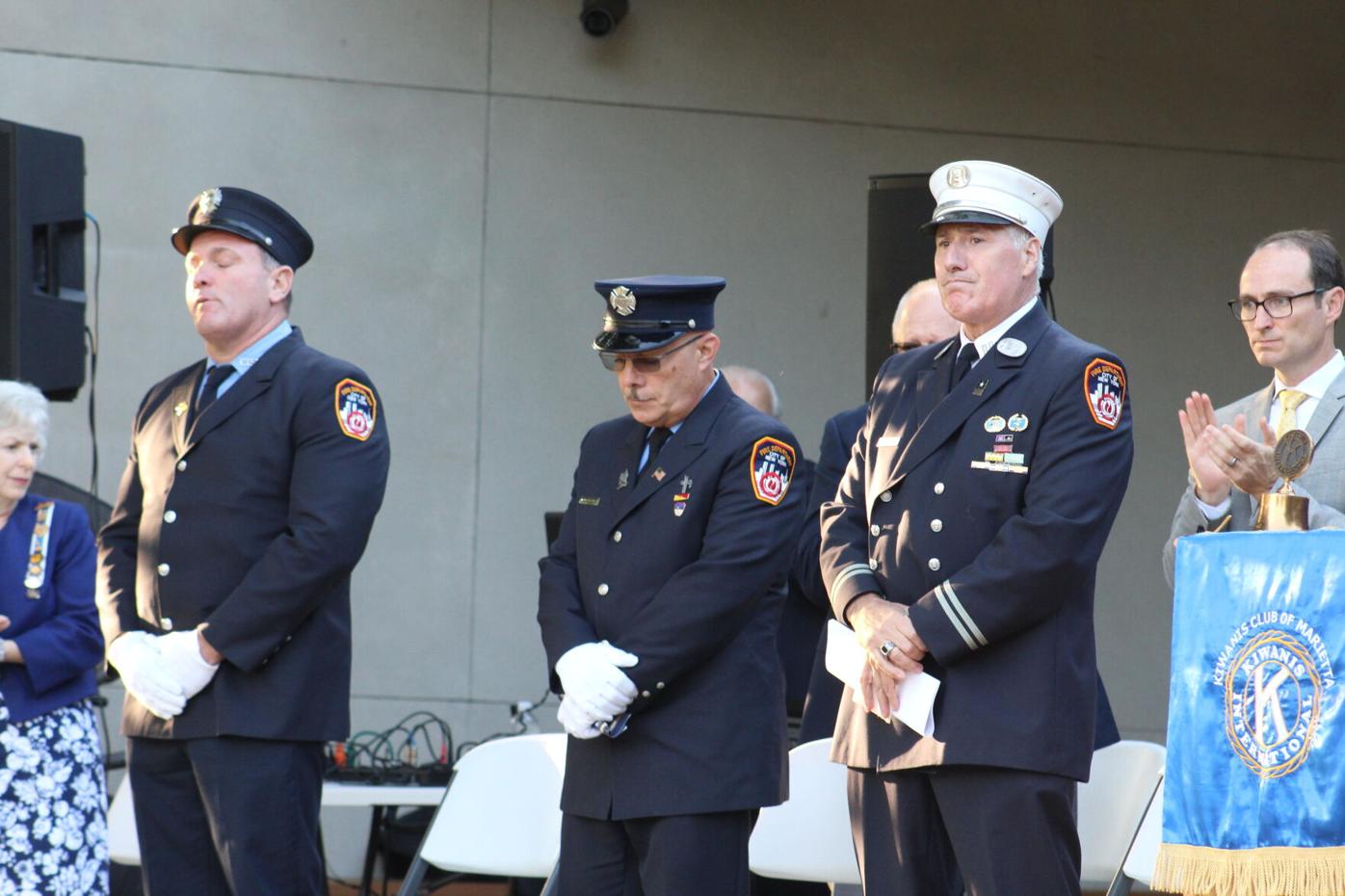 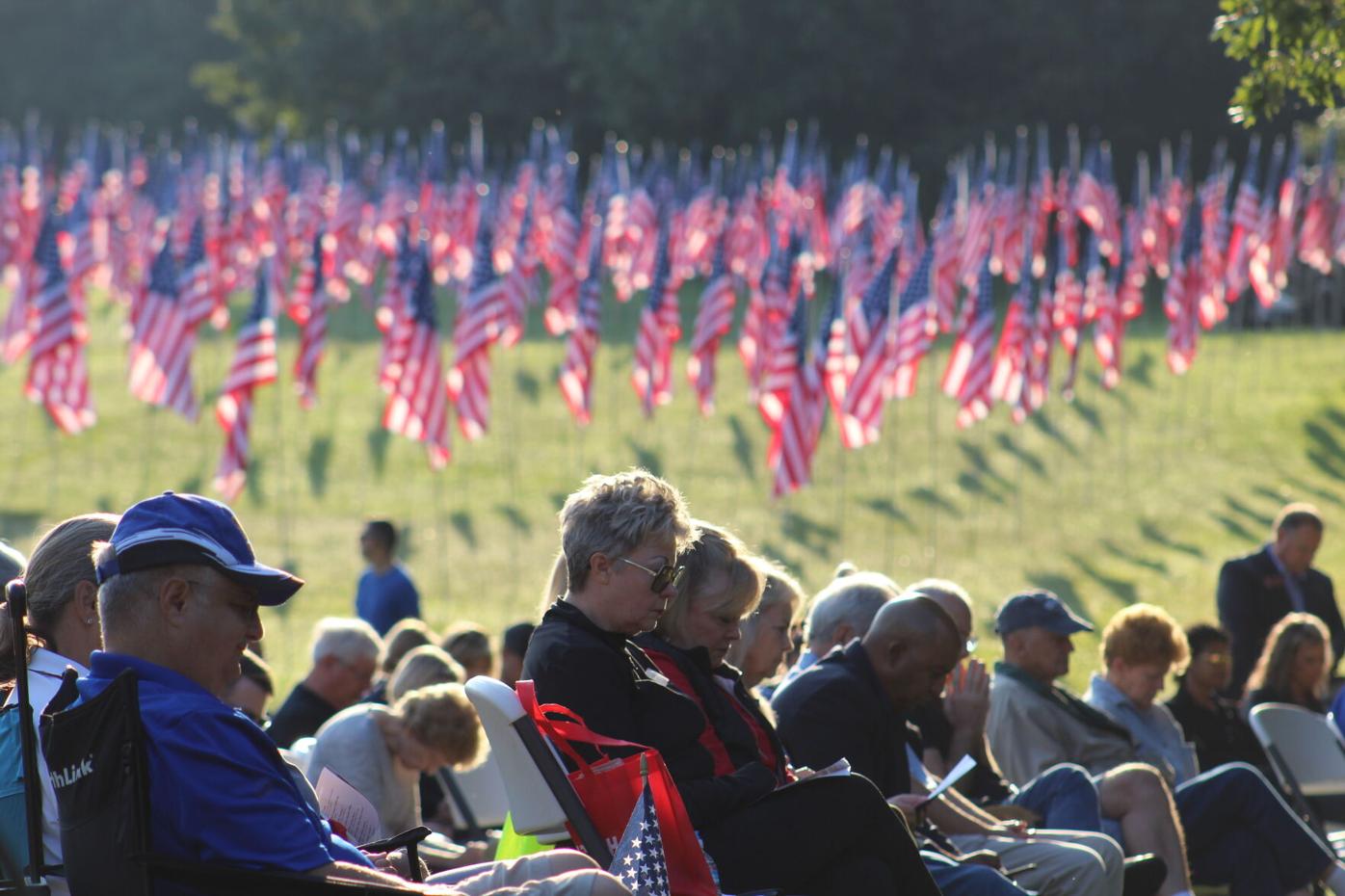 The Kiwanis Club of Marietta organizes the Field of Flags 9/11 memorial every five years. 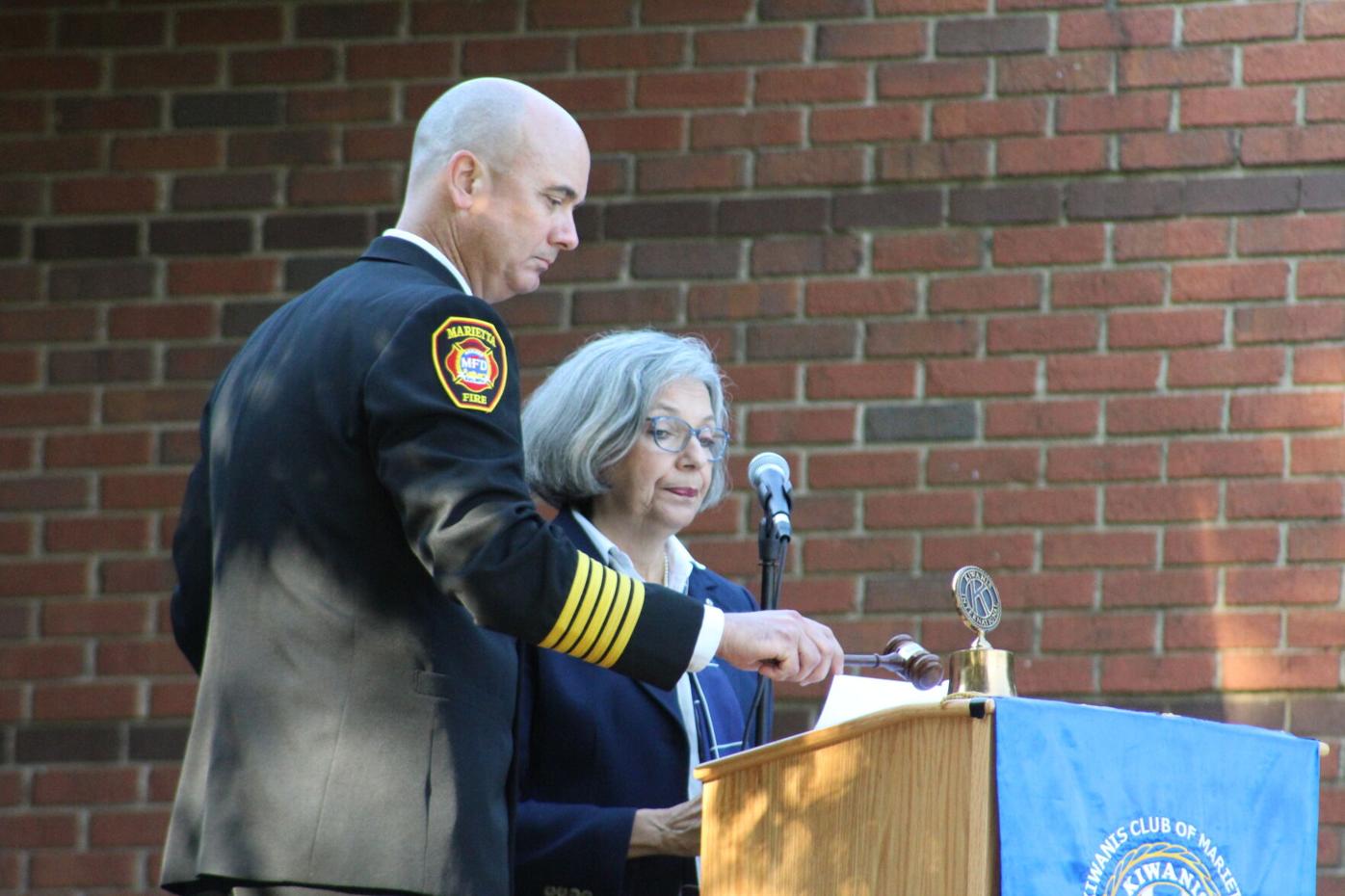 Marietta Fire Chief Tim Milligan rings a bell to mark the moment the South Tower at the World Trade Center was struck exactly 20 years earlier, as Debbie McCracken reads the names of victims of the 9/11 terrorist attacks. 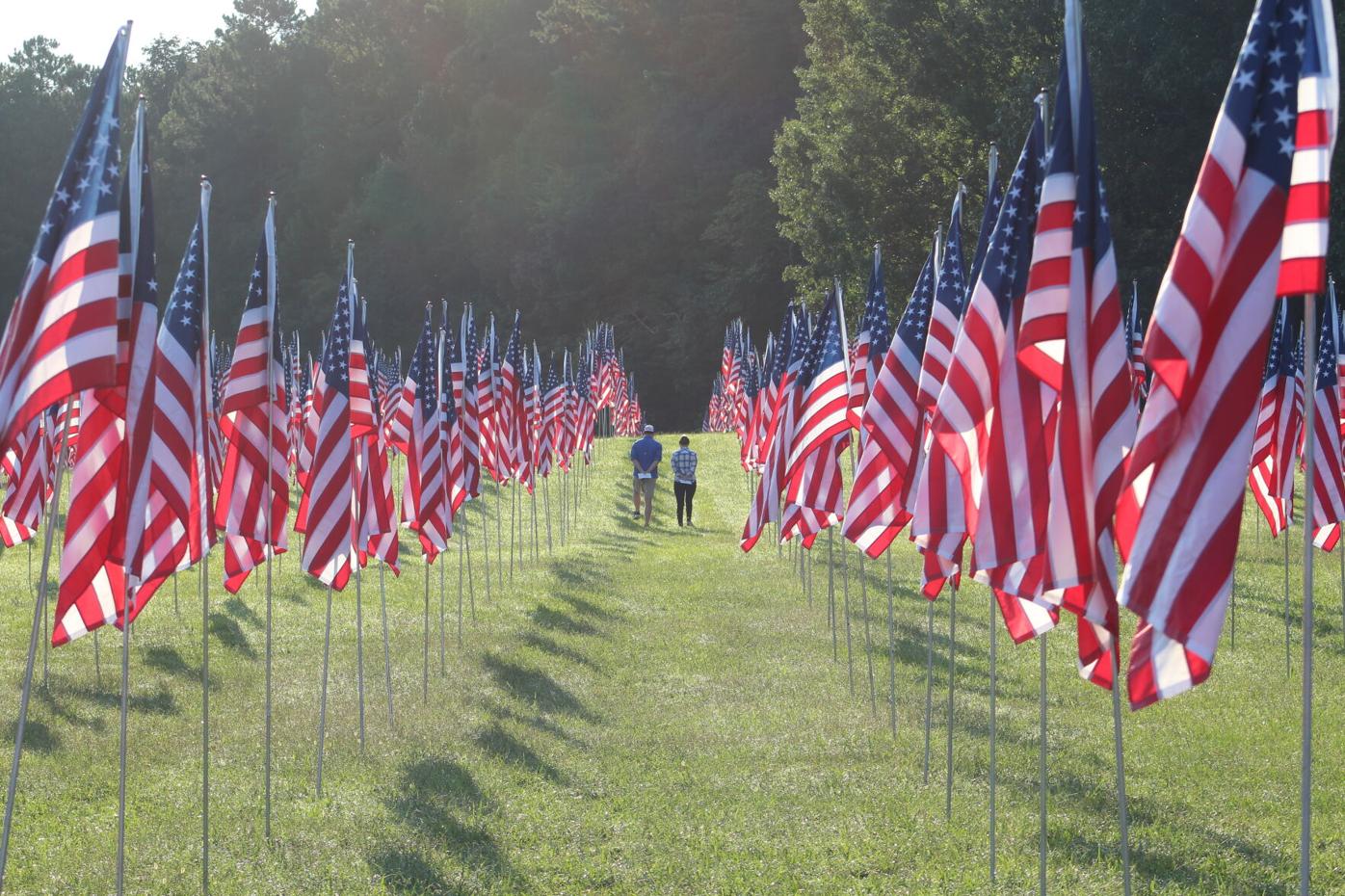 People walk through the Field of Flags at Kennesaw Mountain National Battlefield Park on the morning of Saturday, Sept. 11, 2021.

The Kiwanis Club of Marietta organizes the Field of Flags 9/11 memorial every five years.

Marietta Fire Chief Tim Milligan rings a bell to mark the moment the South Tower at the World Trade Center was struck exactly 20 years earlier, as Debbie McCracken reads the names of victims of the 9/11 terrorist attacks.

People walk through the Field of Flags at Kennesaw Mountain National Battlefield Park on the morning of Saturday, Sept. 11, 2021.

MARIETTA — On a clear blue day 20 years ago, James D’Avolio was playing with his young daughter on the kitchen floor when his mother-in-law called, and told him to turn on his TV.

D’Avolio, then a firefighter with the New York Fire Department, saw the World Trade Center’s North Tower billowing smoke. He got in his car and drove to his firehouse.

In an emotional speech at the foot of Kennesaw Mountain Saturday morning, D’Avolio gave a first-hand account of the chaos at Ground Zero, the fallout from the deadliest attack by a foreign adversary on U.S. soil.

D’Avolio’s speech headlined the Field of Flags 9/11 memorial service, organized every five years by the Kiwanis Club of Marietta. Saturday’s service featured remarks by members of the club; a presentation of colors by the Marietta Fire Department Color Guard; a recitation of the American Creed; renditions of the national anthem, God Bless America and Amazing Grace; and a 21-gun salute.

The service ended with a series of speakers reading aloud the names of the 2,977 people killed that day. Nearby, people wandered among the forest of flags volunteers had planted the week before, one for each victim.

‘He looked at me with tears in his eyes’

“By the time I reached my firehouse, another plane hit the South Tower, and the South Tower had just collapsed,” D’Avolio recalled. “In front of the firehouse there was several firemen who I didn’t know. As I approached the group one fireman said, ‘Say a prayer. We just lost a lot of brothers.’”

Inside, D’Avolio started gathering equipment and thinking about how he could get to the World Trade Center. As he was gathering equipment, a volunteer firefighter pulled up in his Chevrolet Suburban. The pair loaded the SUV and drove toward lower Manhattan.

When they got there, the North Tower collapsed.

“We continued to drive into the dust cloud. There were no cars on the road, there was so many people just walking. Almost all were covered in dust. They were covering their faces, trying to breathe. Some were bleeding, some were bandaged, some were being helped by others, but they were all covered in dust.”

They parked near the intersection of Broadway and Vesey Street, steps from New York City Hall and one block east of the World Trade Complex. On the corner, first responders were “ransacking” a Duane Reade — a CVS-style pharmacy and convenience store — for supplies. They made their way to the Trade Center.

“There were cars burning everywhere, there were buildings on fire, some buildings were already collapsed,” he recalled. “There was a rainstorm of debris.”

Two women emerged from a plume of dust, disheveled. One grabbed him and asked him: Do you know where can I donate blood?

Further into the smoke and dust, he found several hundred firefighters.

He found his friend Johnny Diflipo, a firefighter from Brooklyn.

“He looked at me with tears in his eyes, and he said, ‘James, Johnny (Napolitano) is dead,’” D’Avolio said. “I struggled to breathe, we just held each other for a little while. The three of us would always study for promotions together.”

Nearby, a fire chief stood on the roof of a car, yelling through a bullhorn: “Guys, stay together. Work together. Be smart. Look for any signs of life.”

“I remember searching buildings that were opposite the main collapse area, buildings and void spaces that we could still get into,” he said. “We dug and we searched. We dug with our hands and we dug with whatever tools we can find, or piece of metal that we can find. We dug for any forms of life.”

D’Avolio searched 7 World Trade Center, a 47-story tower that would collapse at 5:20 p.m. that day, having been weakened by a fire that burned for seven hours straight.

Although 7 WTC had been evacuated and no deaths were associated with its collapse, D’Avolio thought to himself as it came down, “nobody could survive that.”

All told, 2,977 people would die in the attacks, 72 of them law enforcement officers and 343 of them New York Fire Department firefighters, 19 of which worked at D’Avolio’s firehouse.

Saturday morning, as the sun rose over Kennesaw Mountain 20 years later, his voice caught as he recalled his wife crying, saying, over and over, “Thank you for calling.”

‘The feeling is still there’

D’Avolio only came home four times the next 30 days, fairly typical for an NYFD firefighter in the aftermath of 9/11, he said.

On Sept. 12, he assisted in the rescue of Genelle Guzman, the last person found alive in the rubble of the World Trade Center. On December 11, he helped carry the body of fellow fireman Jon Ielpi out of the site with Ielpi’s father, Lee Ielpi, “a legendary fireman,” and his brother Brendon Ielpi, who would graduate from the fire academy shortly thereafter. His friends Ray Pfeifer and Vinny Ungaro would die years later from 9/11-related cancers.

In 2002, D’Avolio was promoted to lieutenant, and in 2006, to captain. In 2007, he was asked to help the medical examiner’s office develop a water-fed system that would sift through debris the office had kept in order to find any remaining human tissue and DNA and, hopefully, provide closure to families whose loved ones had vanished without a trace in the attacks. This past week, that same system identified two more people, D’Avolio said.

D’Avolio was joined at Saturday’s service by two other retired New York firefighters, one of them John Serafino, who had worked out of a firehouse on New York’s Upper West Side when the towers were hit.

Seldom mentioned during 9/11 memorials, Serafino said, is that the NYFD didn’t lose just any firefighters, but the cream of the crop.

“They were the most gung-ho, most well-respected and probably the most decorated members of our department that were the first to charge down there,” he said. “We lost that 343 guys, (but) we could have lost 3,000 guys, that’s the kind of experience that went with them. And we became a very different fire department after that.”

All these years later, he said, he still gets emotional thinking back to that day.

“I can’t hear the names without, you know, welling up,” Serafino said, standing in the shade of the visitor center at Kennesaw Mountain as names of the victims of 9/11 were read aloud nearby. “There were a lot of close friends that died way before their time.”