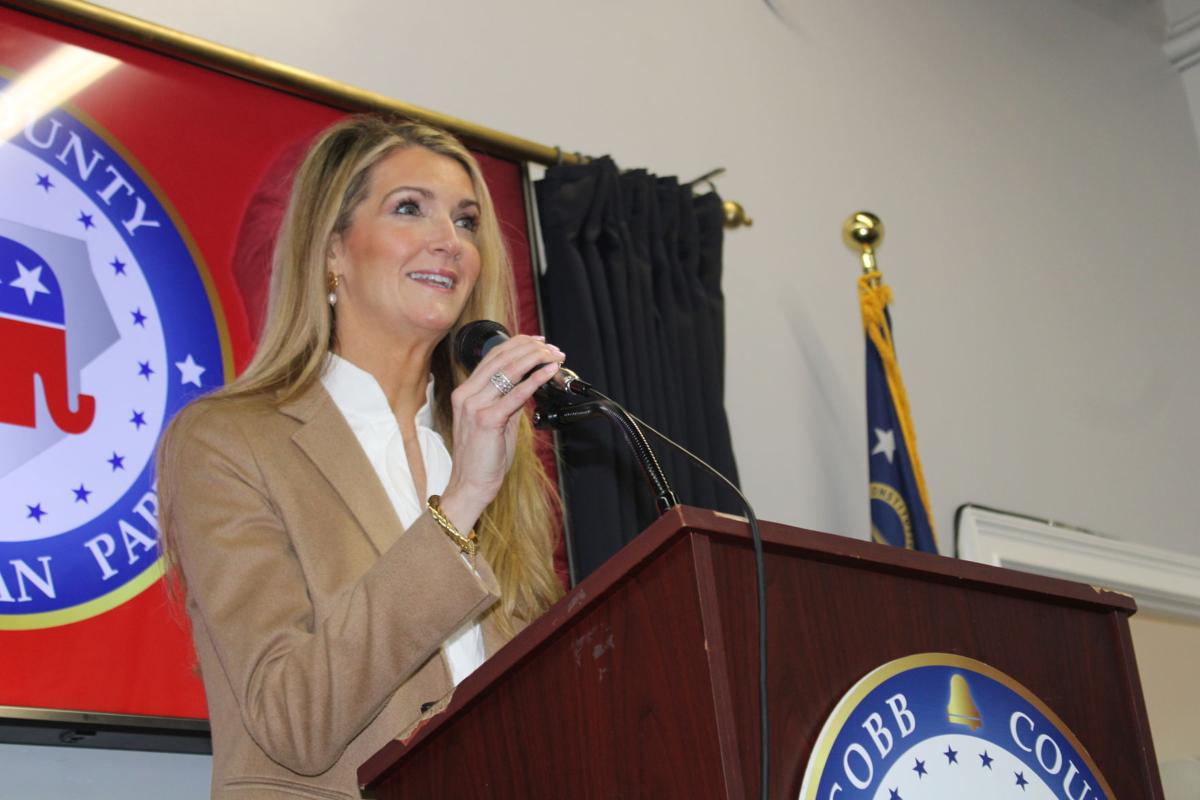 Ga. Senator-designate Kelly Loeffler speaks to a meeting of the Cobb GOP. 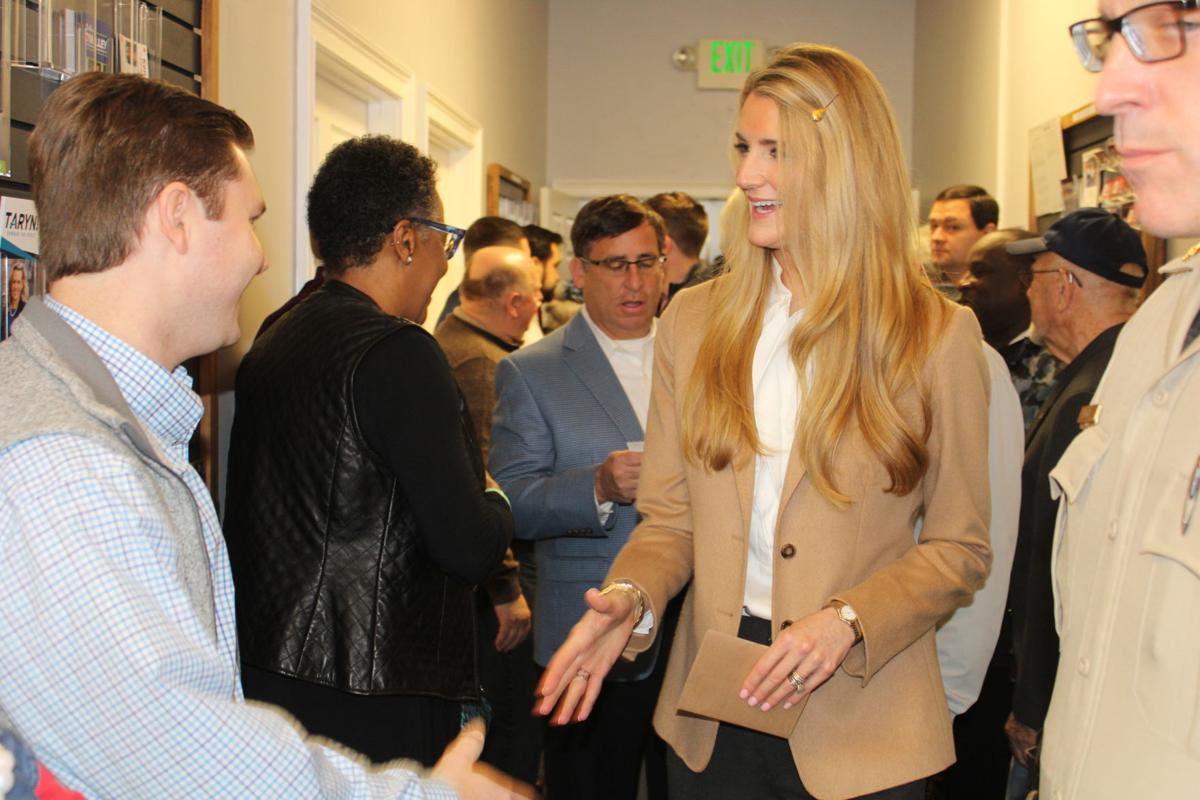 Georgia Senator-designate Kelly Loeffler meets with voters after her remarks. 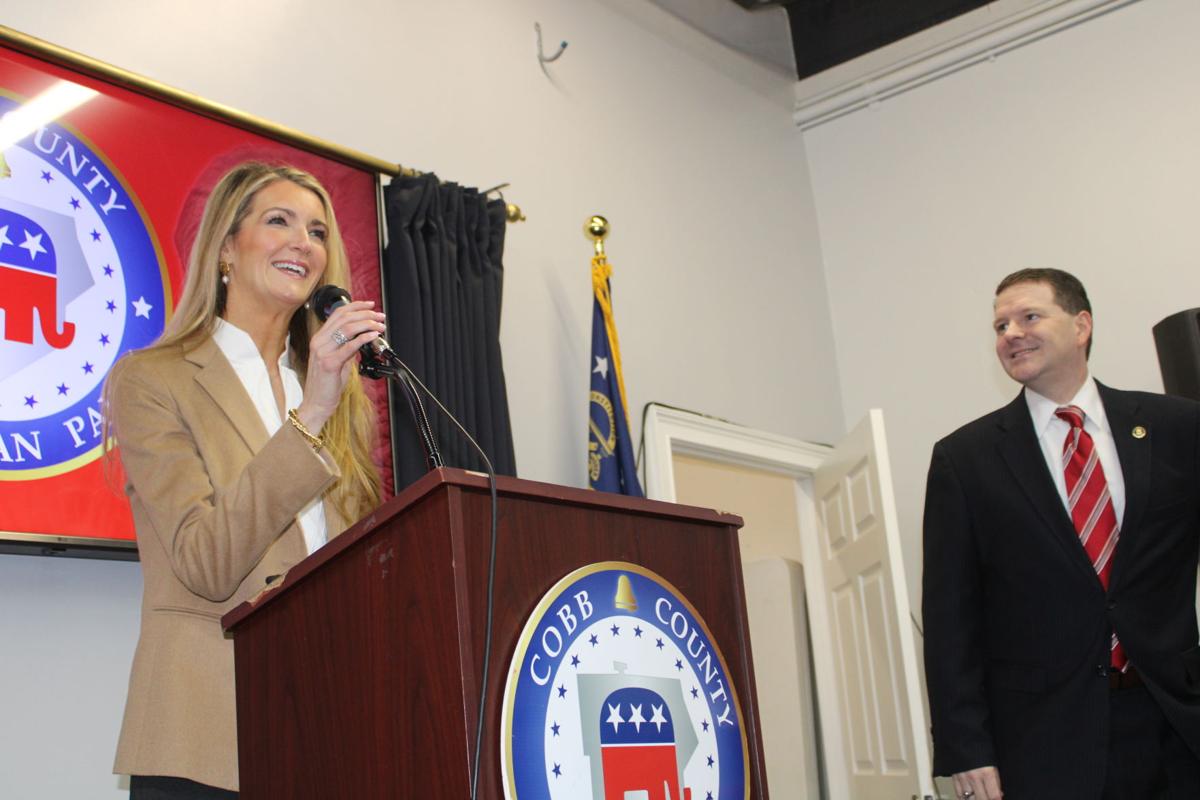 Georgia Senator-designate Kelly Loeffler speaks to a meeting of the Cobb GOP as party chairman Jason Shepherd watches on. 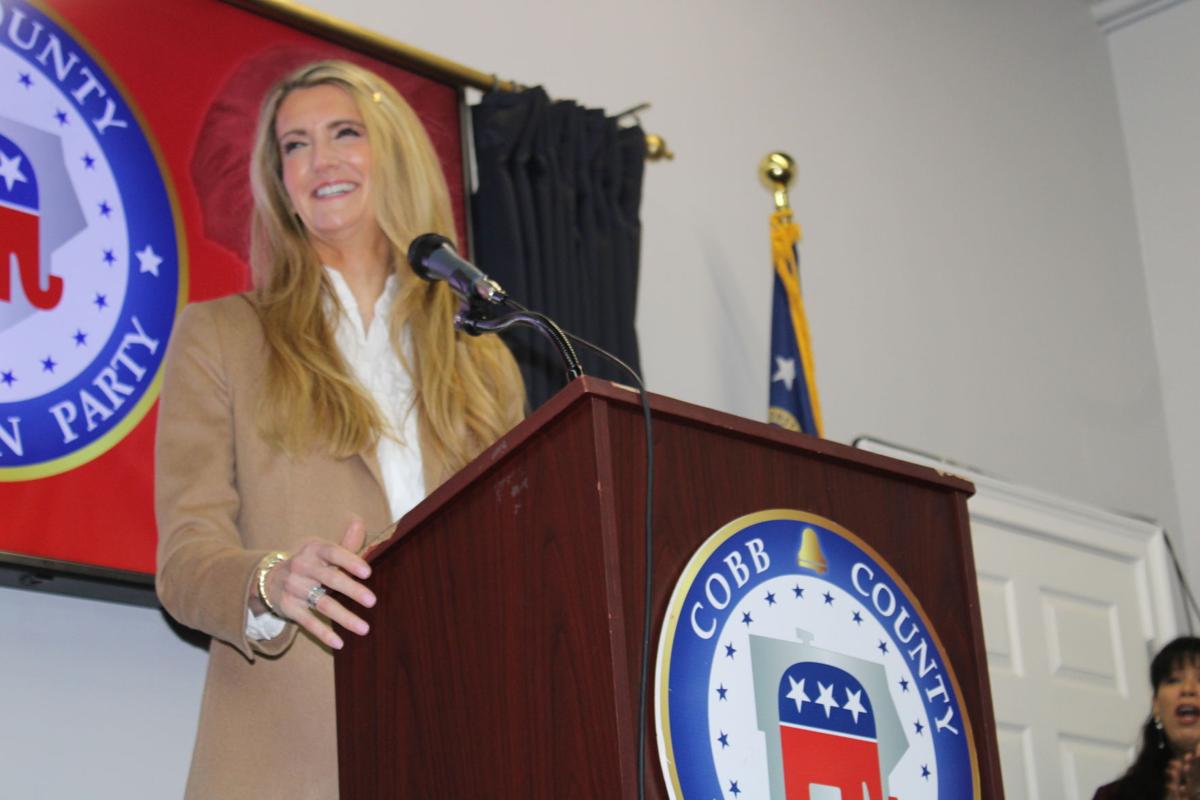 Georgia Senator-designate Kelly Loeffler speaks to a meeting of the Cobb GOP. 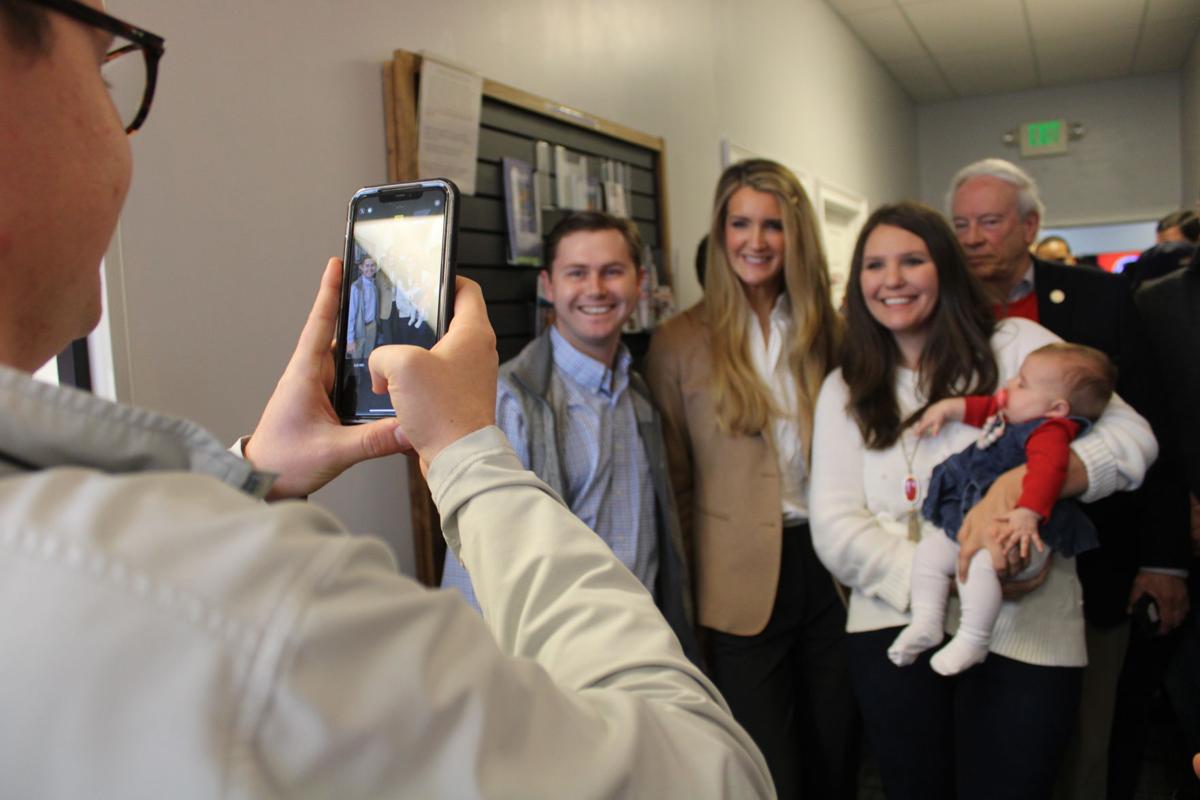 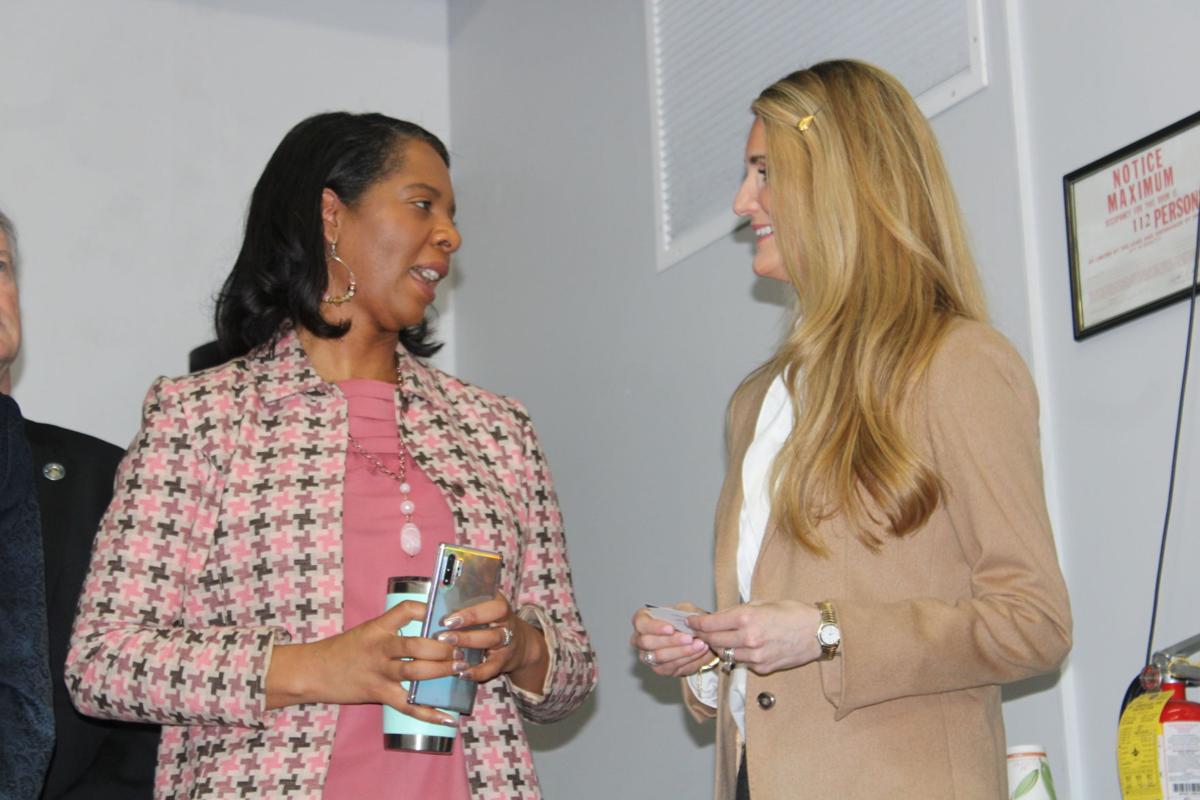 Ga. Senator-designate Kelly Loeffler speaks to a meeting of the Cobb GOP.

Georgia Senator-designate Kelly Loeffler meets with voters after her remarks.

Georgia Senator-designate Kelly Loeffler speaks to a meeting of the Cobb GOP as party chairman Jason Shepherd watches on.

Georgia Senator-designate Kelly Loeffler speaks to a meeting of the Cobb GOP.

Georgia’s next U.S. senator stopped by Marietta last Saturday, making her final public appearance in the state before she was sworn in by Vice President Mike Pence in a ceremony in Washington on Monday.

Senator-designate Kelly Loeffler spoke at the county Republican Party’s monthly breakfast where, for the first time ever, tickets sold out four days before the event. The main hall of the Roswell Street building was stuffed to the gills, and more conservatives from around the metro area listened in from the lobby.

“I think this represents the best of what we need from the 2020 election,” Loeffler said. “We need the full support of the party, but we also need to welcome new people, and this is part of the reason I put my hand up to serve our state. I want to help broaden our party, communicate the values that we have as Republicans and conservatives.”

Loeffler spoke for about five minutes and did not take questions from the audience.

Gov. Brian Kemp tapped Loeffler last month to succeed now-retired Sen. Johnny Isakson, who stepped down at the end of the year because of health concerns. If she wants to keep her seat, Loeffler will need to win a special election in November to serve the rest of Isakson’s term, then win another election in 2022 to serve a full term.

“I am truly humbled by the work he’s done, and he’ll serve as a guidepost for me,” she said. “It’s big shoes to fill. I know I’m not going to do it on day one, but I’m going to get to work quickly Monday when I get sworn in.”

A political newcomer, Loeffler is best known as co-owner of the Atlanta Dream professional women’s basketball team, as well as CEO of financial services firm Bakkt, which offers a regulated market for Bitcoin. She was previously an executive at Intercontinental Exchange, a behemoth founded by her husband that owns the New York Stock Exchange. Bakkt is a subsidiary of Intercontinental Exchange.

“The stakes have never ever been higher,” Loeffler said. “It’s why I stepped out of the private sector. You’ll see a lot in the press about speculation that I’m here for the wrong reasons, that I’m trying to do something that has something to do with business. If I wanted to be in business, I would stay in business. I am here to serve our country. I am here to be a servant, and this is my focus. I’m walking away from my business responsibilities to do this, and I’m working for all of you.”

“In the meantime, I’m going to continue to be trying to get back to Georgia as much as possible, continue the dialogue,” she said. “I want everyone to know I’m very open to conversations, meeting people and getting around the state. I hope people will call me Kelly. I’m not trying to create a barrier between any of us, so you’ll start to see my campaign gearing up so that we can be successful in 2020, and I can promise you, I’m going to work very, very hard to make sure that both Sen. (David) Perdue and I keep our state red and work to support President Trump’s reelection and up and down the ticket. So I’m here for all of you. I look forward to continuing the conversation and earning your support.”

It appeared Loeffler had already earned the support of many breakfast attendees. A human wave swelled around her as she got up to leave the event, and the short trip from the stage to the exit became a prolonged affair as the incoming senator stopped to shake hands and pose for pictures with supporters — though she did not take questions from the media.

Kemp’s decision to pick Loeffler was seen by some politicos as a play to keep moderate suburban women voting Republican — as well as a snub of President Donald Trump, who publicly supported staunch conservative and Trump ally U.S. Rep. Doug Collins, R-Gainesville.

The appointment set off a firestorm in the conservative media, where right-wing pundits like TV and radio host Sean Hannity bemoaned Kemp’s pick.

“I don’t know why the governor of Georgia, which I consider my second home, Brian Kemp, is appointing what appears to be an untested big Republican Romney donor described by many as a (Republican in Name Only),” Hannity said.

Some who came to the breakfast said Loeffler was not their first choice to replace Isakson, but they are largely willing to give her a shot.

Activist Jerry Kotyuk of east Cobb said he had some qualms at first, but he trusts Kemp’s judgment.

“I liked what she was saying, she said the right things, I agree with her,’ he said. “I didn’t like some of the things people were putting out about her early, I think people were jumping to conclusions without evidence, but I want to give her a chance, I want to wait and see, and I know that she’ll be attacked by the left, and I want to see how much of a fighter she is, she’s got to fight back. … I want to give her a chance, but I’m going to be watching to see how she reacts.”

“The governor has the right to pick a candidate, and I’m giving her a full pass and see how she performs. … Like anybody, she’s a new person in the market, you have to kind of figure out where her values are and what’s going on, but I believe she will, as she said, get out and meet people. She’s got to basically develop the same ground game as Isakson had,” he said.

Cobb GOP Chairman Jason Shepherd said he thinks Georgia Republicans are coalescing around Loeffler and will give her their support.

“There were a lot of great people that put in resumes, over 500, and I think one political consultant said Brian Kemp is going to make one person very happy and 499 angry. I don’t think that’s the case. … Most people understand, especially if you’re involved in politics, that it’s the governor’s purview, and I think he made a fantastic pick,” he said.

Back her, she isn’t Johnny Isakson but who is ? She is a strong woman and represents strong republican values. Trump 2020