The Latest: F1 to furlough half of its staff am… 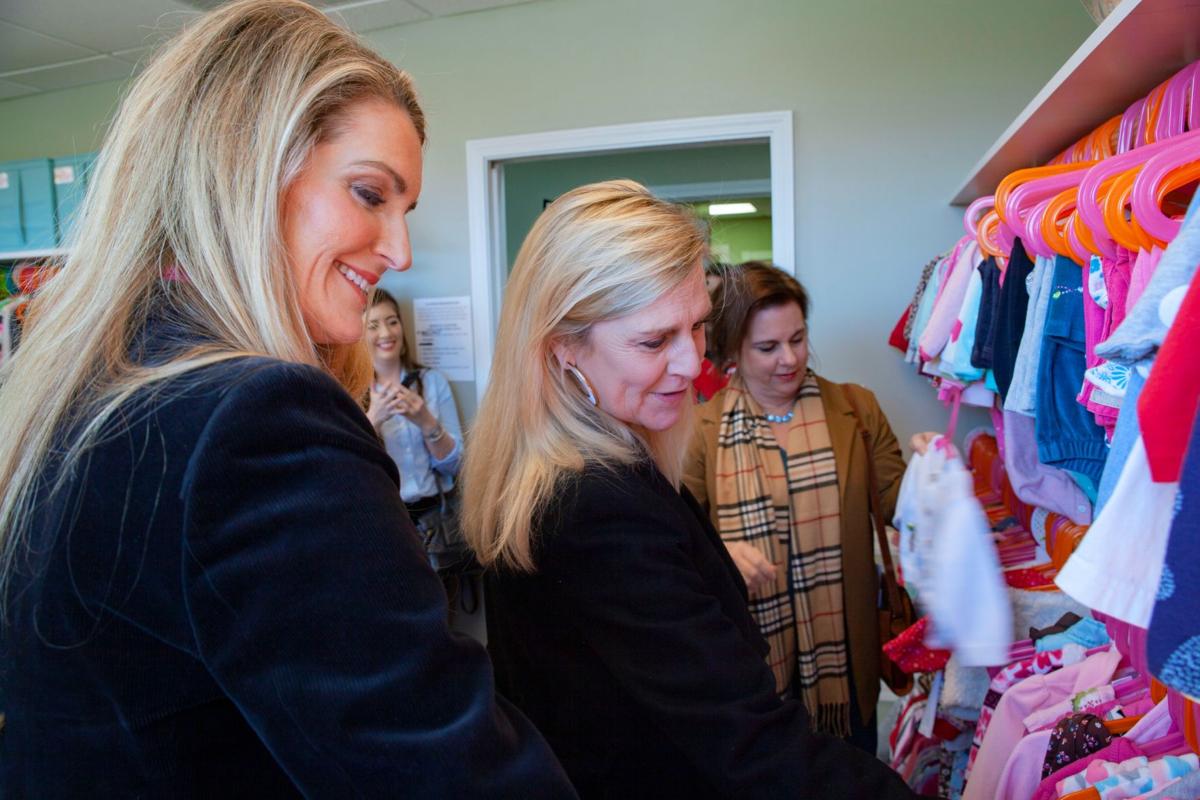 From left are U.S. Sen. Kelly Loeffler, R-Ga., Georgia first lady Marty Kemp and Susan B. Anthony List President Marjorie Dannenfelser as they browse through toddler and baby clothes during a tour of First Care Women’s Clinic in Marietta. 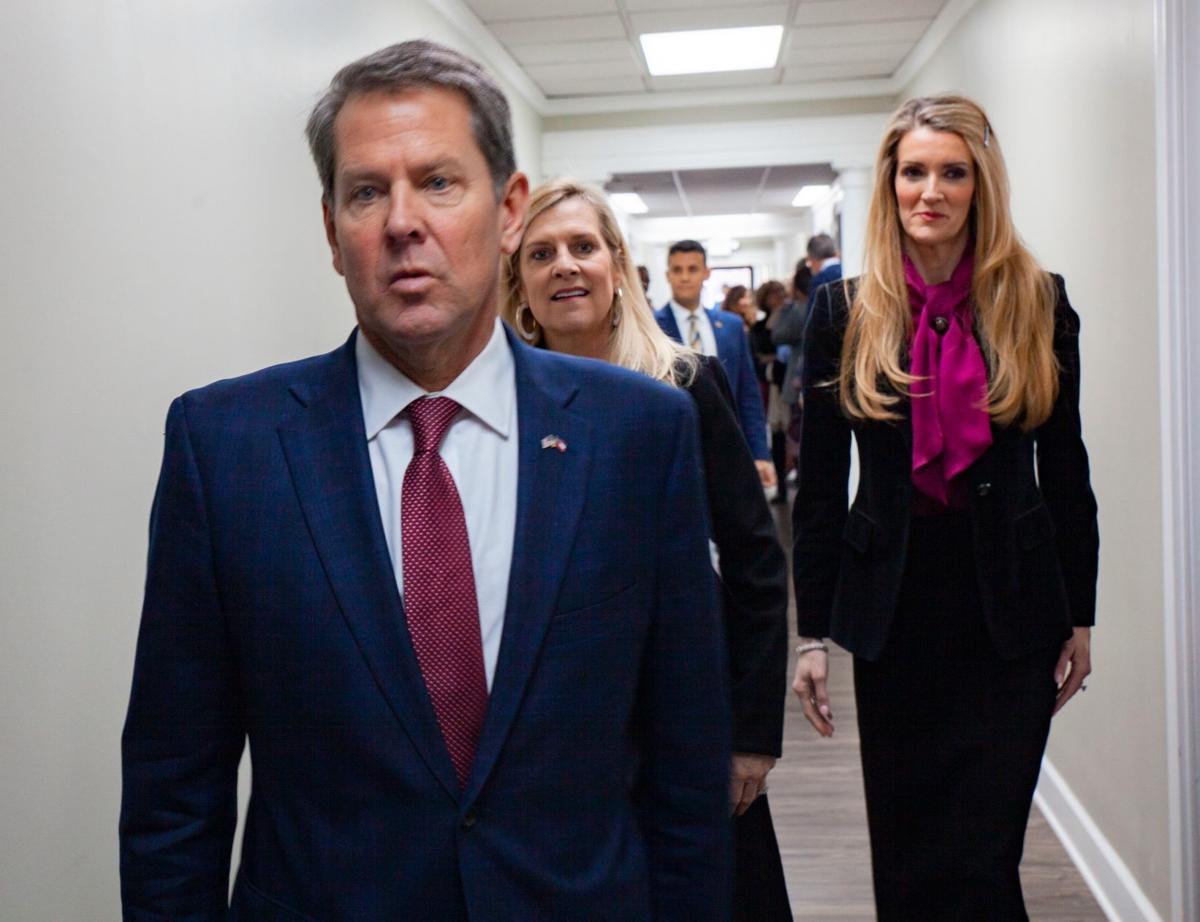 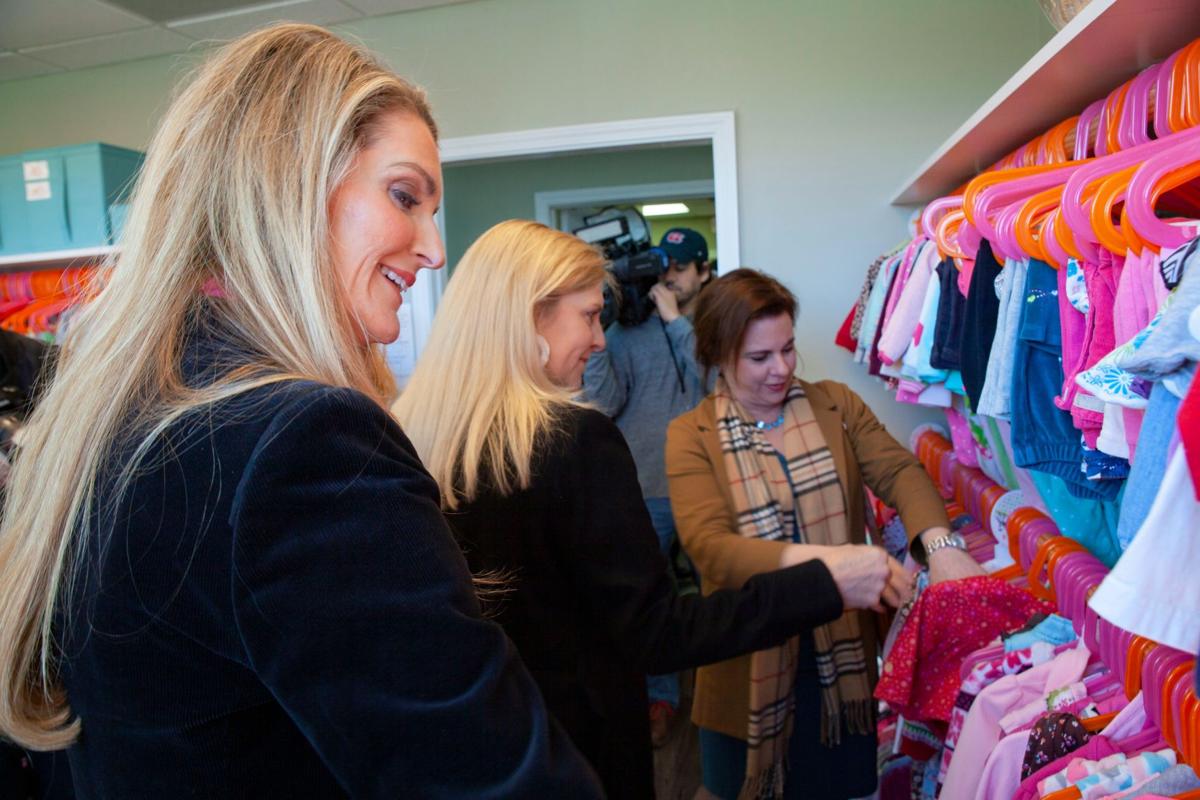 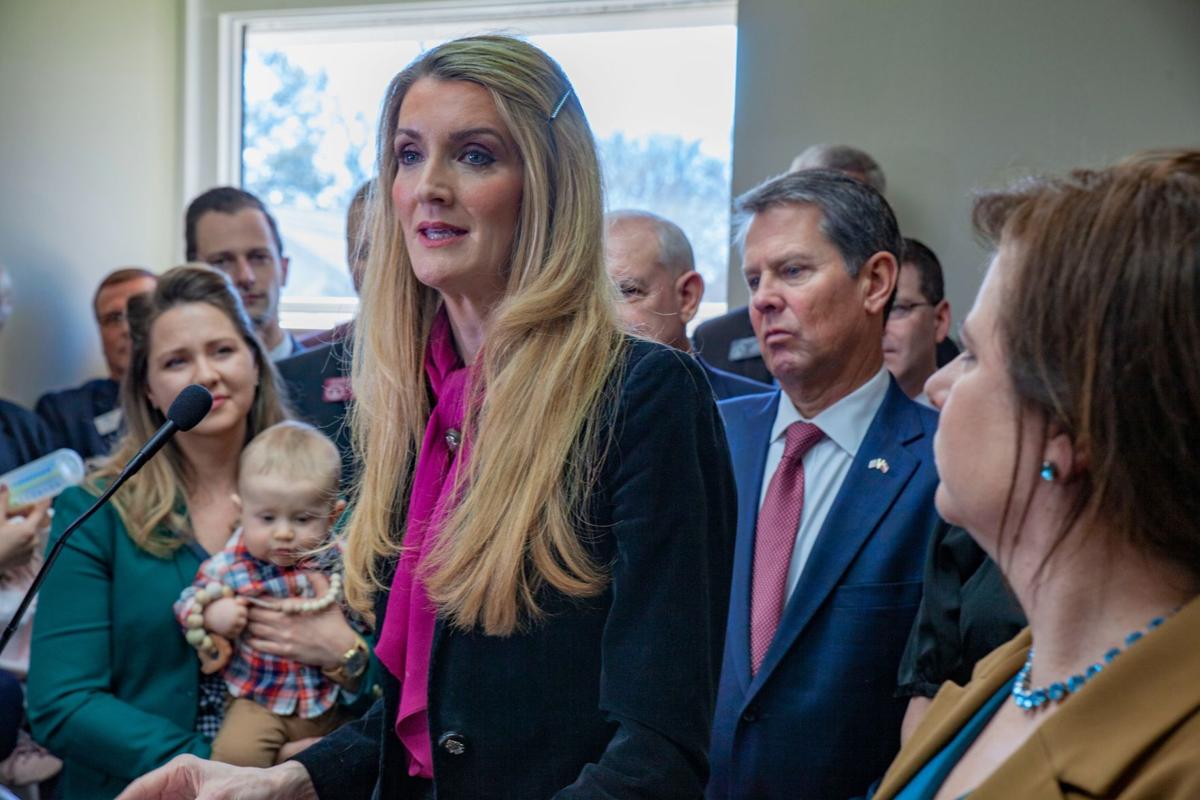 U.S. Sen. Kelly Loeffler, R-Ga. speaks to the press during her visit to the First Care Women's Clinic in Marietta. 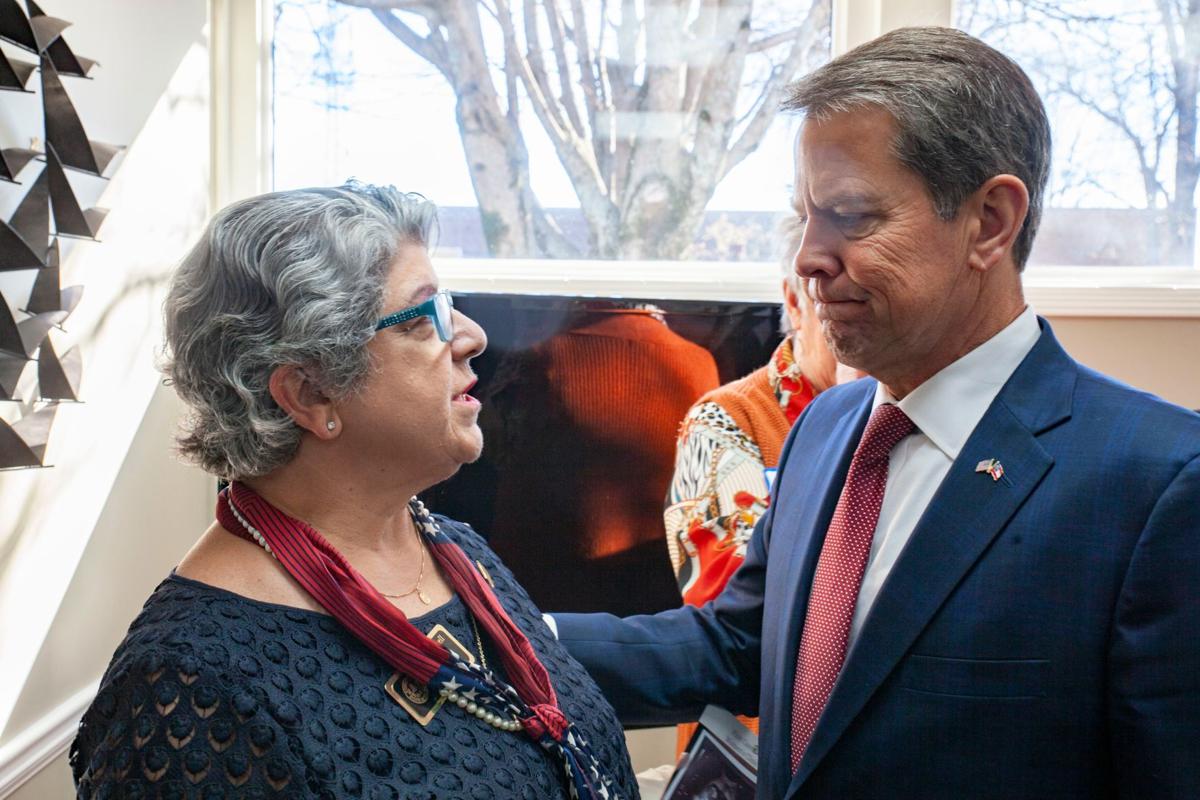 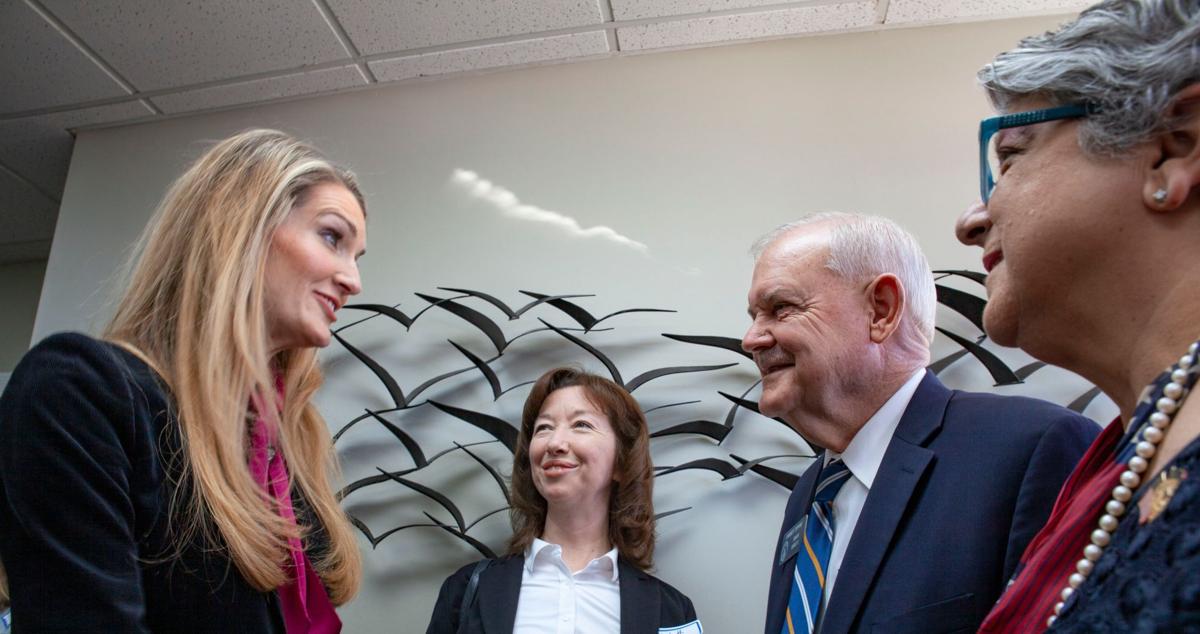 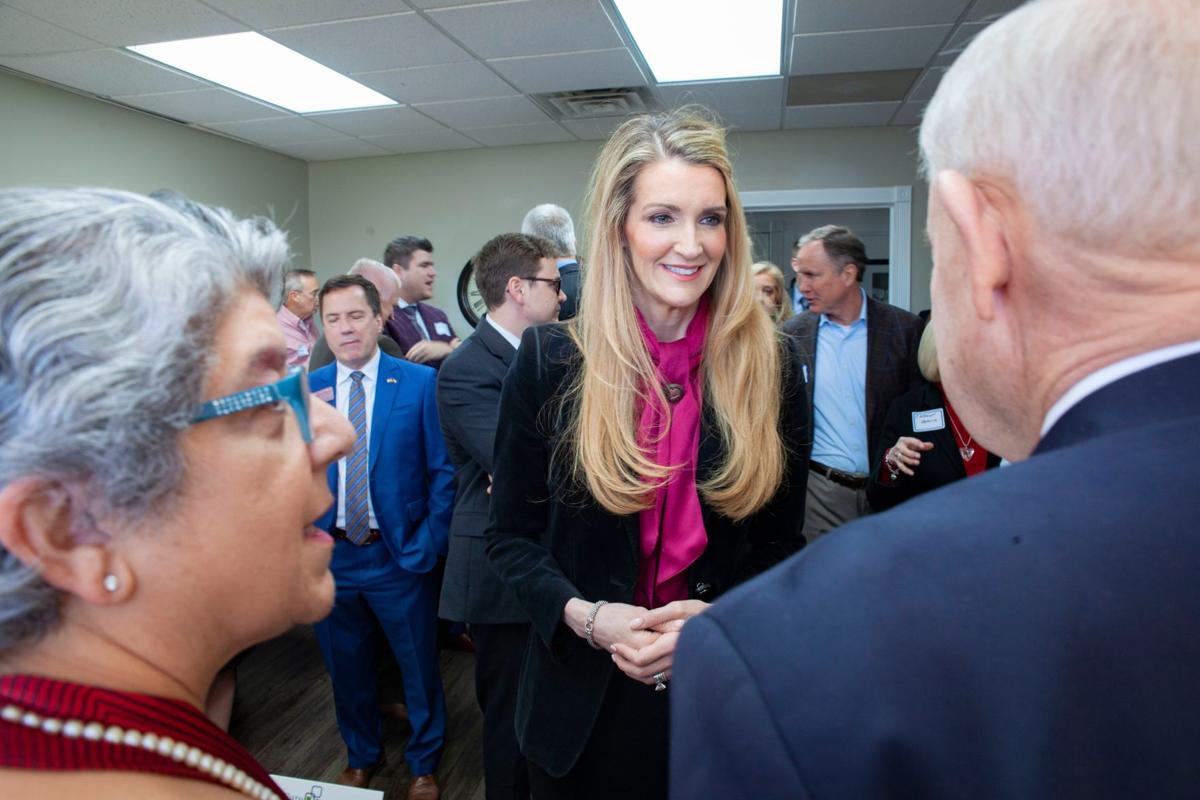 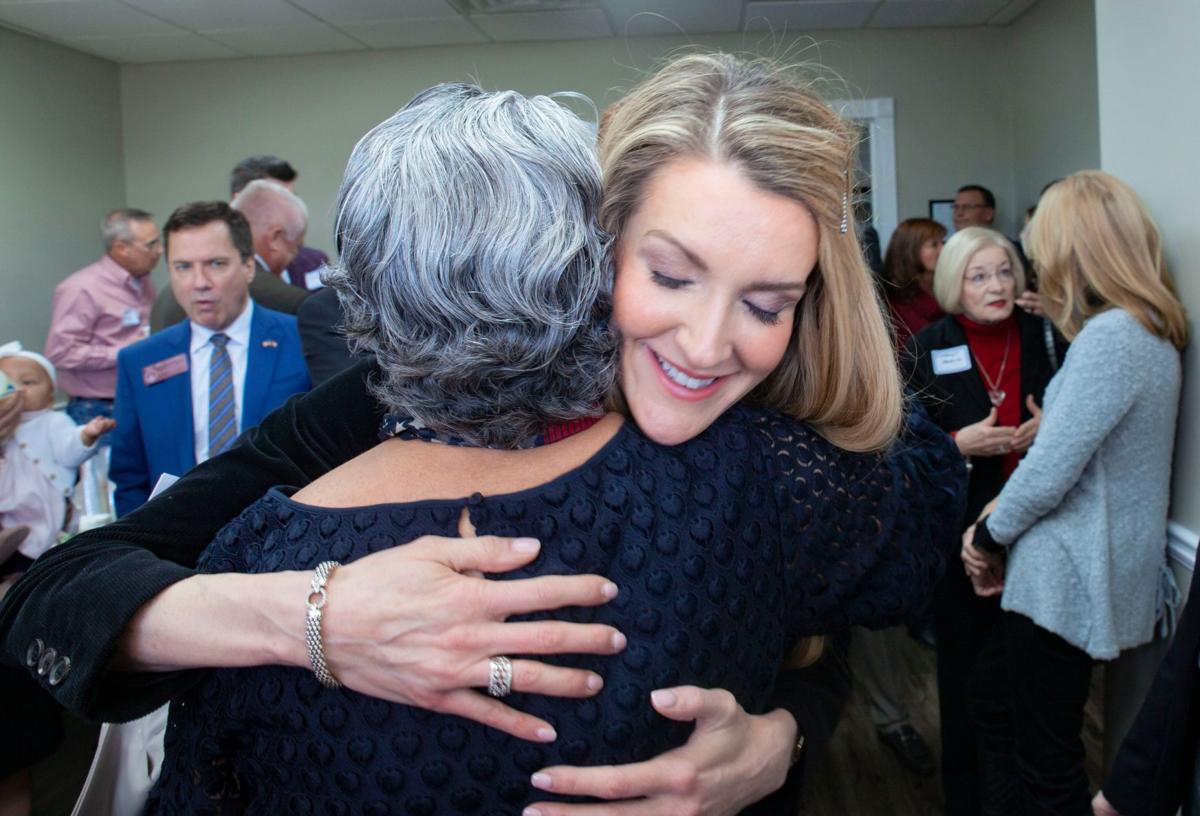 From left are U.S. Sen. Kelly Loeffler, R-Ga., Georgia first lady Marty Kemp and Susan B. Anthony List President Marjorie Dannenfelser as they browse through toddler and baby clothes during a tour of First Care Women’s Clinic in Marietta.

U.S. Sen. Kelly Loeffler, R-Ga. speaks to the press during her visit to the First Care Women's Clinic in Marietta.

MARIETTA — U.S. Sen. Kelly Loeffler, R-Georgia, responded Friday to questions surrounding a pro-life nonprofit’s support of her campaign to keep her seat in November’s elections, and told supporters she would continue to fight for “an alternative to Planned Parenthood.”

The nonprofit Susan B. Anthony List announced this week its support of Loeffler’s campaign after its president, Marjorie Dannenfelser, had earlier said Loeffler should be disqualified for the seat for her service on Atlanta’s Grady Memorial Hospital’s board.

Dannenfelser said she previously believed the hospital performed elective abortions, but now understands it does not.

Loeffler joined Dannenfelser and Gov. Brian Kemp on a tour of the First Care Women’s Clinic in Marietta, just east of the intersection of Roswell Road and Fairground Street on Friday morning.

After being followed down the hallways of the faith-based and pro-life women’s health center by gaggles of photographers and TV stations and stepping briefly into rooms full of diapers, baby clothing and other resources for new mothers, Loeffler took questions from the media on her pro-life record, and U.S. Rep. Doug Collins’ challenge for her seat.

As she and her team turned to leave the news conference, an MDJ reporter asked the senator for comment on Georgia’s heartbeat law, which she did not respond to.

Kemp, however, told the MDJ he expected the law, which he signed in 2019, to have a “long-haul” legal fight, but that the state would continue to push for its activation.

The law would ban abortions once a fetal heartbeat could be detected, usually around six weeks of pregnancy. The law was blocked by a federal judge in Atlanta after organizations including the American Civil Liberties Union and Planned Parenthood filed suit.

Federal judges across the country have repeatedly blocked similar bills, citing the 1973 Roe v. Wade case that protected a woman’s choice to have an abortion.

“We hope to go to the victorious court,” Kemp said in response to whether he’d like to see the law end up in front of the U.S. Supreme Court.

He also told the media his push for a pro-life agenda is reflected in his push for foster care and adoption reform in Georgia, changes he believes the majority of the Peach State’s citizens favor.

In reversal, Susan B. Anthony List supports Loeffler for Senate

Shortly after Kemp announced late last year that he would appoint Loeffler to fill the seat being vacated early by U.S. Sen. Johnny Isakson, she received backlash from some Georgia conservatives who questioned past donations she or her companies had allegedly made to politicians or organizations like Sen. Mitt Romney, R-Utah, and Planned Parenthood.

Loeffler addressed the latter Friday, saying neither she nor the Atlanta Dream, a WNBA franchise she co-owns, have donated to the nonprofit organization providing women’s health services, including elective abortions.

Addressing Dannenfelser’s criticism of her appointment late last year, as well as what had changed and earned her the endorsement of the Susan B. Anthony List, Loeffler reiterated that Grady Memorial does not perform abortions and that she is “strongly pro-life — lifelong Christian, lifelong pro-life.”

“I’ve gotten to know Marjorie and the team at Susan B. Anthony List, and they understand my pro-life focus, and I’ve backed that up in my action in the Senate,” Loeffler said, listing four bills she’d sponsored in her month of service.

Dannenfelser also addressed her own past criticisms of Loeffler:

“What changed was that I actually met and got to know Kelly Loeffler,” Dannenfelser said. “The concerns that I had were concerns that bubbled up from the rumor universe that were very concerning. … Since then, I’ve come to understand the lack of connection that I thought was there, but more importantly, who this woman is, what’s in her heart, what she plans to do. ... Our conversations — our planning together about what is to come in the U.S. Senate behind the leadership of a really strong pro-life woman — is mission central for the Susan B. Anthony List.”

Dannenfelser continued that she’d been “surprised by joy” to meet the real Kelly Loeffler.

As babies held by their parents cooed behind her, Loeffler took the lectern, thanking Kemp for his “strong conservative values,” and Dannenfelser for her “tireless work” toward pro-life goals.

Reflecting on whether she thinks the campaign of challenger U.S. Rep. Doug Collins, R-Gainesville, will divide the Republican party and heighten the risk of a Democrat taking her seat in November, Loeffler said she is focused on beating Democrats, advancing President Donald Trump’s agenda and “working for Georgians.”

“I’m focused on winning this seat in November, but most of all (I’m) focused on working for Georgia. Nothing is going to take my eye off what I went to Washington to do, which is fight for all Georgians, and make sure that we’re serving our families, our veterans, our farmers — there’s so much work to do,” she said. “And I believe, just like today, when I back up my words with my actions, people will see who I am, we’ll come together, and we’ll elect Republicans in Georgia in 2020.”

Loeffler said her status as a “political outsider” is something that she takes pride in and called Washington “broken” in response to a question of whether she considered Collins’ longer political career and better recognition among Georgia voters a threat in this year’s elections.

“I will continue to be that outside voice in Washington. Washington is broken. I am going to work hard to fix it, to support ways of Georgia’s priorities getting to the forefront as an outsider and using my business experience. And I’m not going to let politics divert me from that, and I think that’s the problem with Washington: There’s too many career politicians.”

Though a bill in the General Assembly aims to add a primary election, the special election to fill the remainder of Isakson’s term ending at the end of 2022, will at this point still be Nov. 3, according to Janine Eveler, director of Cobb County Elections & Registration.

If no candidate receives a majority of the vote, Eveler said a runoff would be Jan. 5, 2021.

On top of her ownership of the Atlanta Dream, Loeffler has also served as chief executive officer of Bakkt, an Atlanta-based Intercontinental Exchange subsidiary that trades cryptocurrency futures.

She said when she left the private sector to serve in the U.S. Senate, her attention turned to “fight for the values that are important to Georgia.” Among the most important of those issues, Loeffler said, was to “protect innocent life, advance the pro-life movement and be a voice for the most vulnerable.”

She further applauded the work of organizations like First Care, calling the Marietta center an “inspiring example.”

“I will do everything I can at the federal level to assist these organizations in their mission,” Loeffler said. “After one month on the job, I hope Georgians now know that as a Christian and lifelong pro-life conservative, I will always defend life.”

Addressing his mandated state budget cuts of 4% this fiscal year and 6% in fiscal 2021, Kemp said they were all “designed to streamline, make state government more efficient, end the status quo (and) figure out better ways to do things with less people and less money.”

In response to concerns over how the budget cuts might be affecting the Georgia Bureau of Investigation’s testing on a backlog of rape kits, Kemp said “the press has missed the fact” that the state’s crime labs are going to privatize investigations and other work, “where it makes sense.”

“Those are the kinds of things we need to be doing in state government. I would not believe some of the rhetoric that’s out there about the reduction in services,” he said. “We do not believe that we are going to see that, and I think over the last week, we have had a great dialogue with the (state) Legislature.”

The state Legislature took a break last week from its regular business to take a deeper dive into the budget. Lawmakers began making changes to the governor’s budget on Thursday.