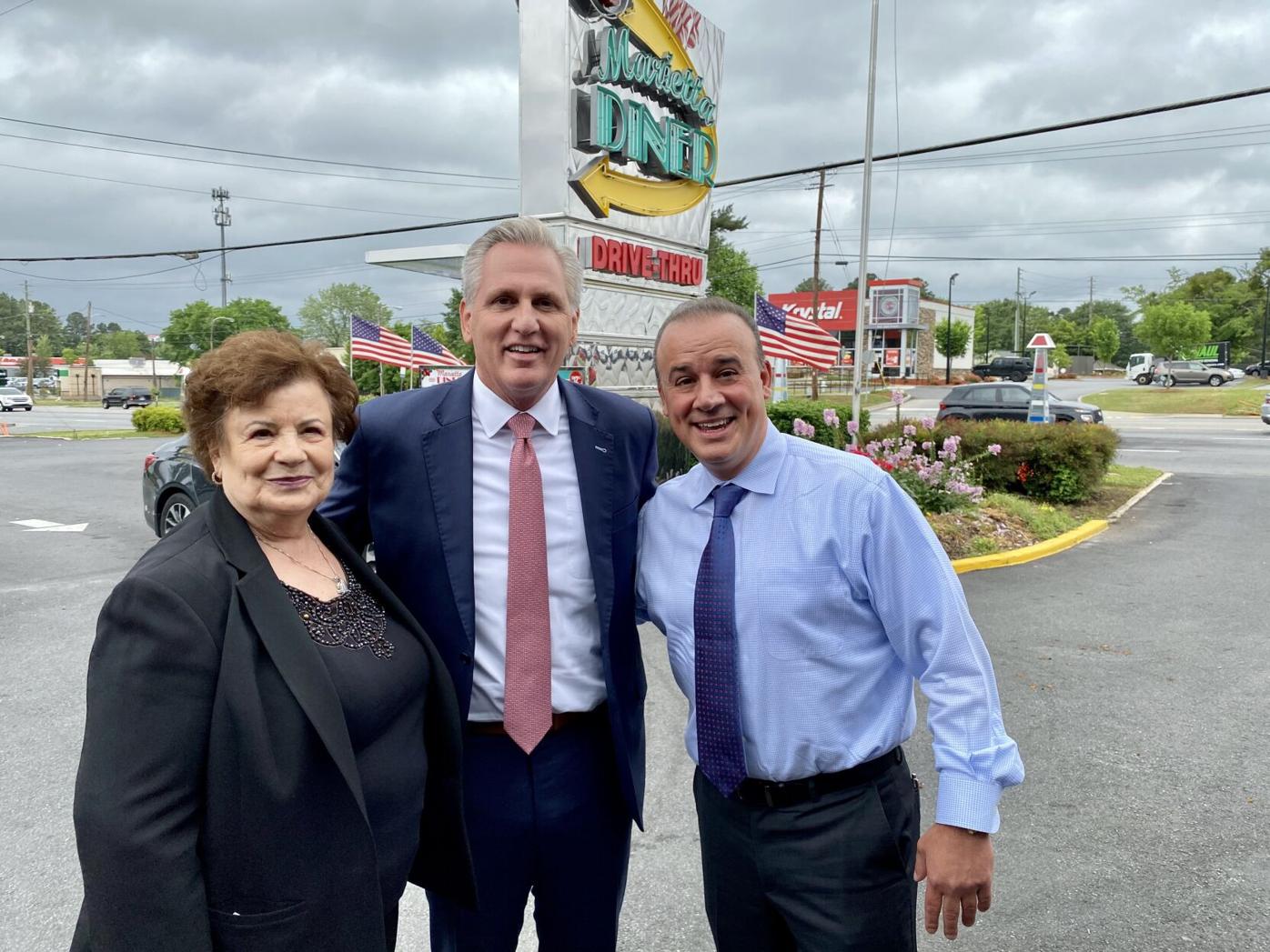 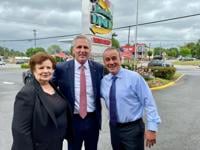 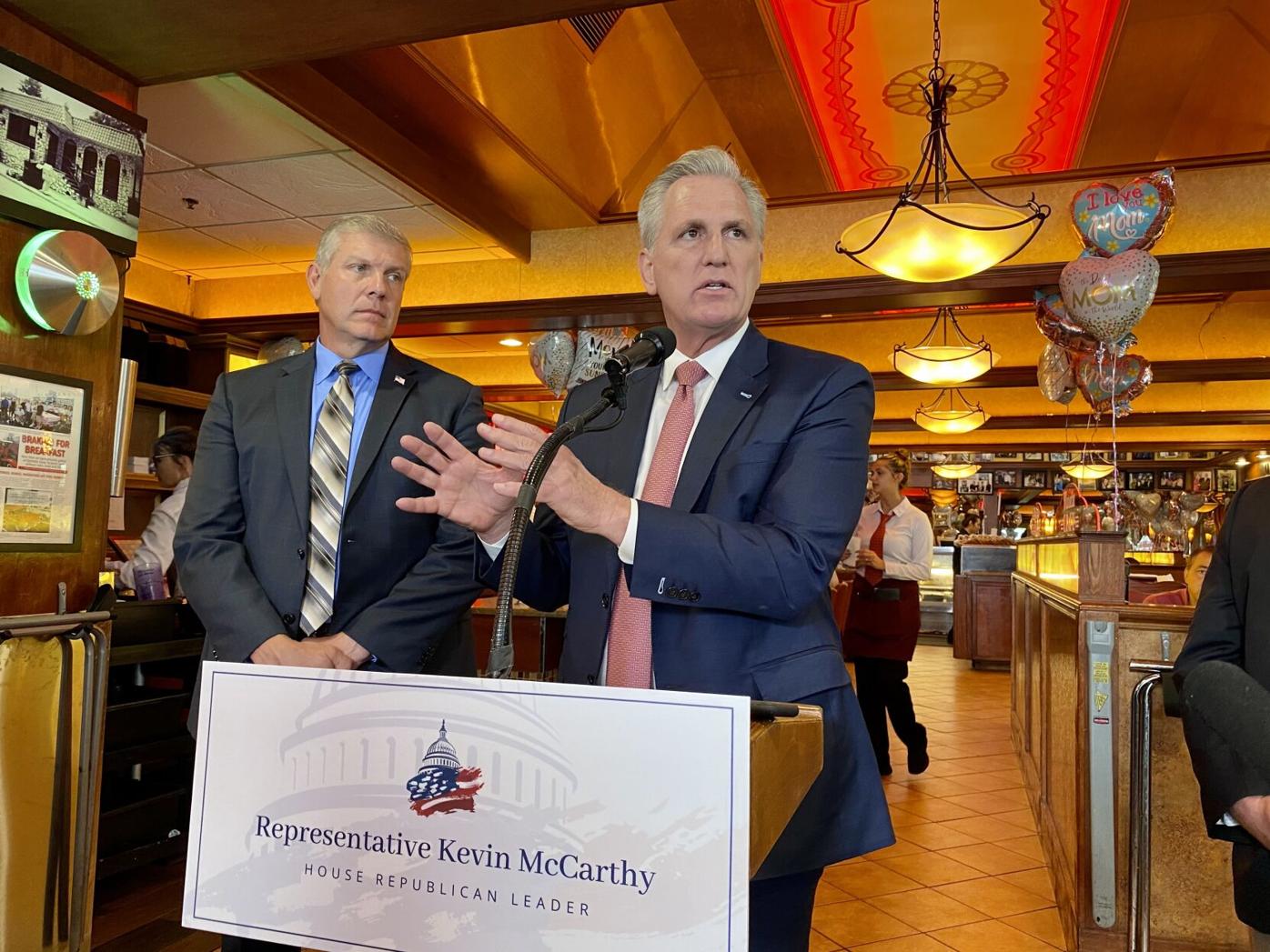 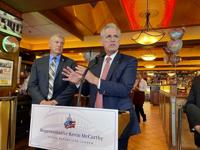 House Minority Leader Kevin McCarthy stopped by the Marietta Diner on Tuesday to meet with local business leaders impacted by Major League Baseball’s decision to pull the All-Star Game from Georgia. To his left is U.S. Rep. Barry Loudermilk, R-Cassville. 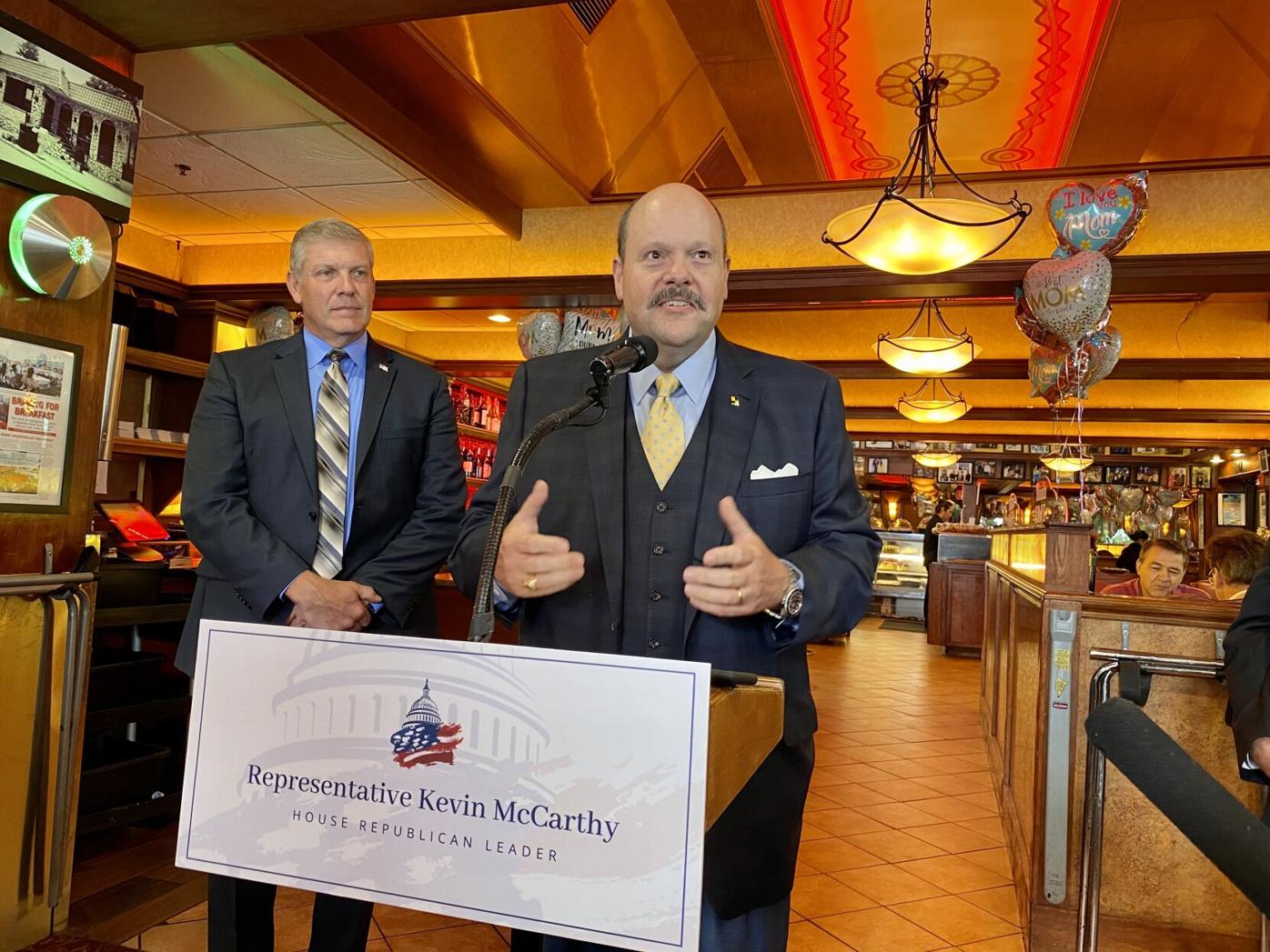 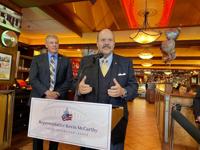 Brent Brown, owner of Chesley Brown International, speaks to the media at the Marietta Diner on Tuesday. 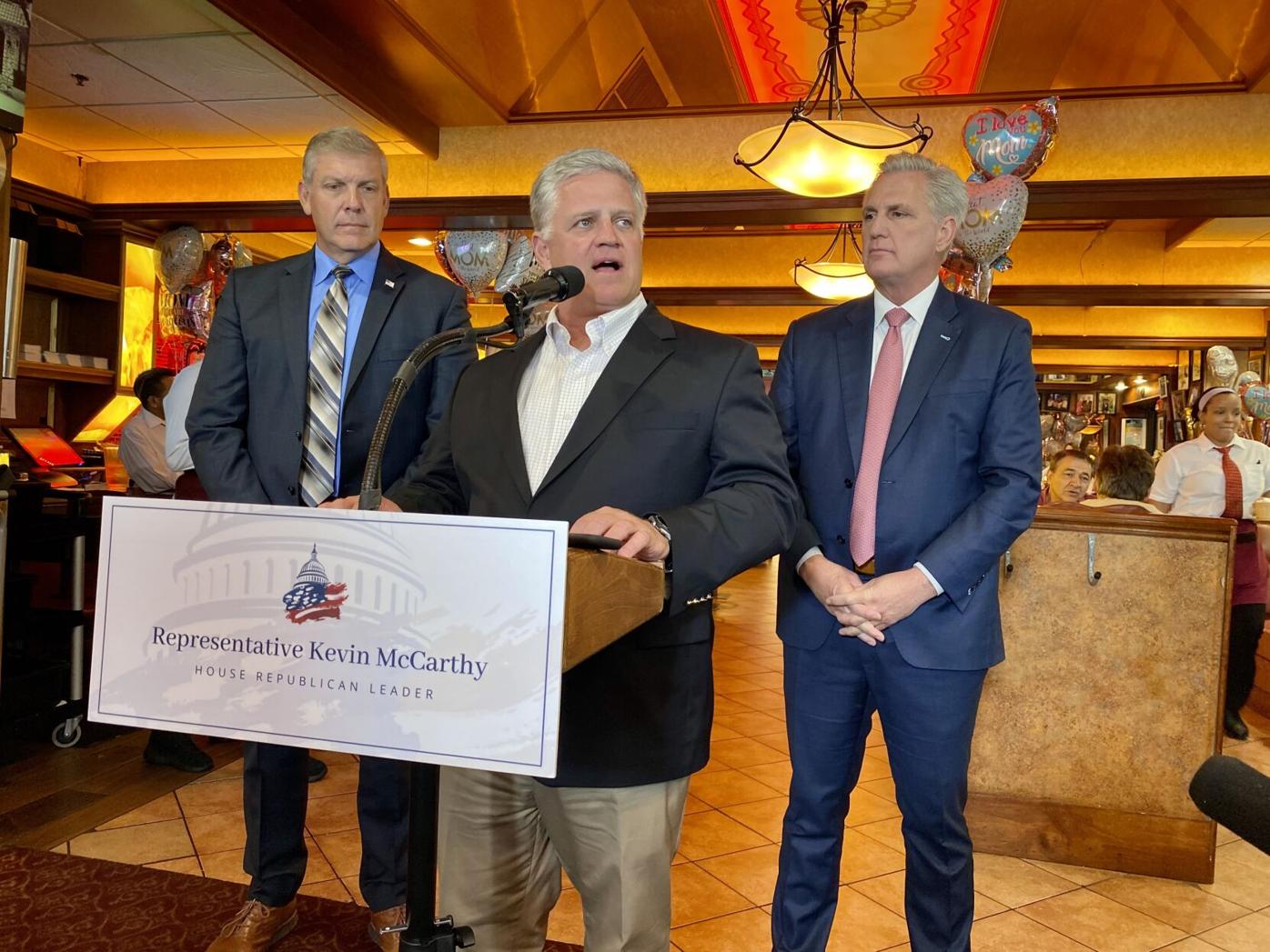 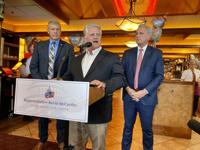 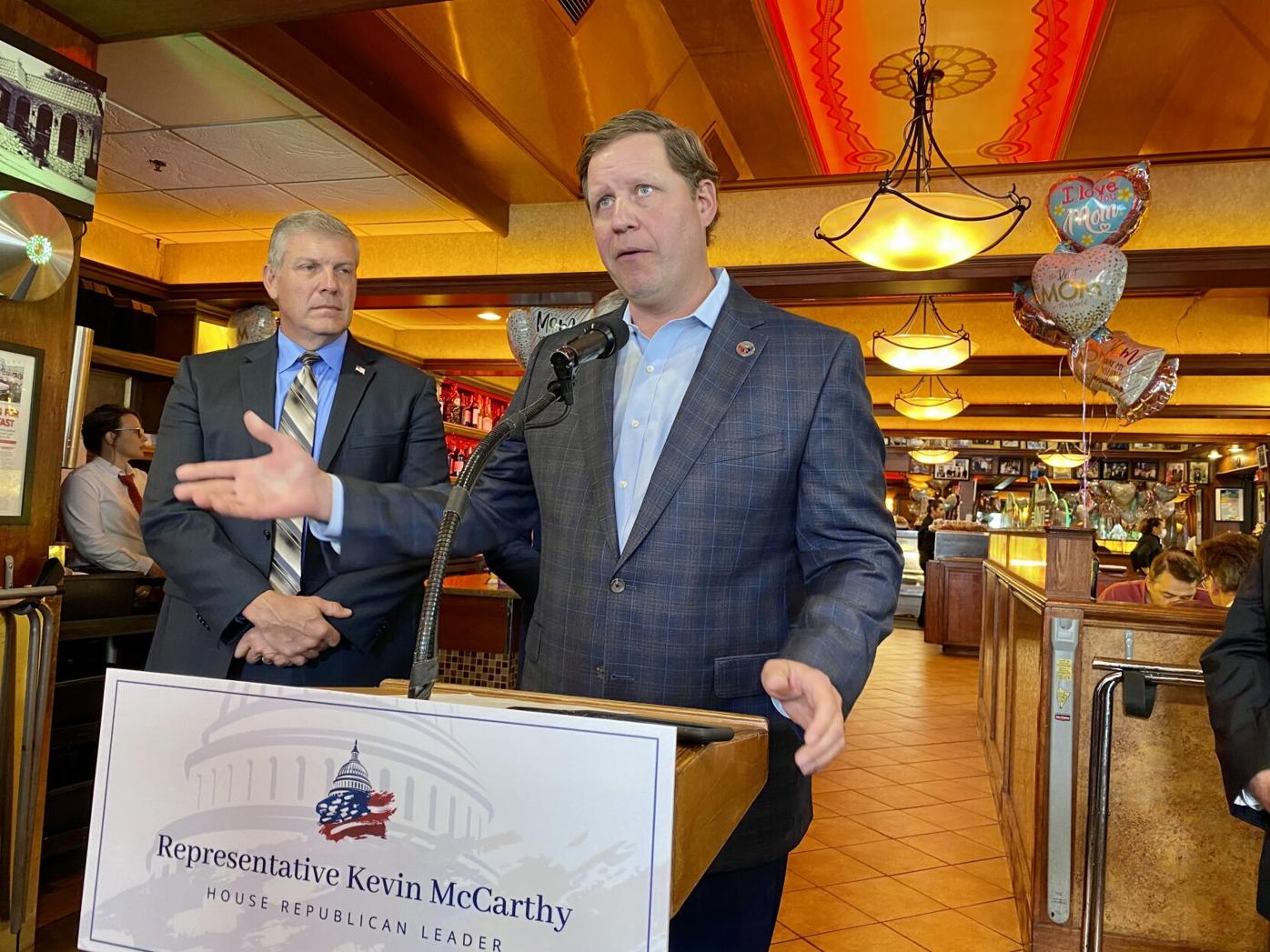 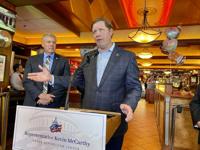 Former Cobb Chamber of Commerce Chairman Mitch Rhoden speaks to the media during the press conference at the Marietta Diner on Tuesday. 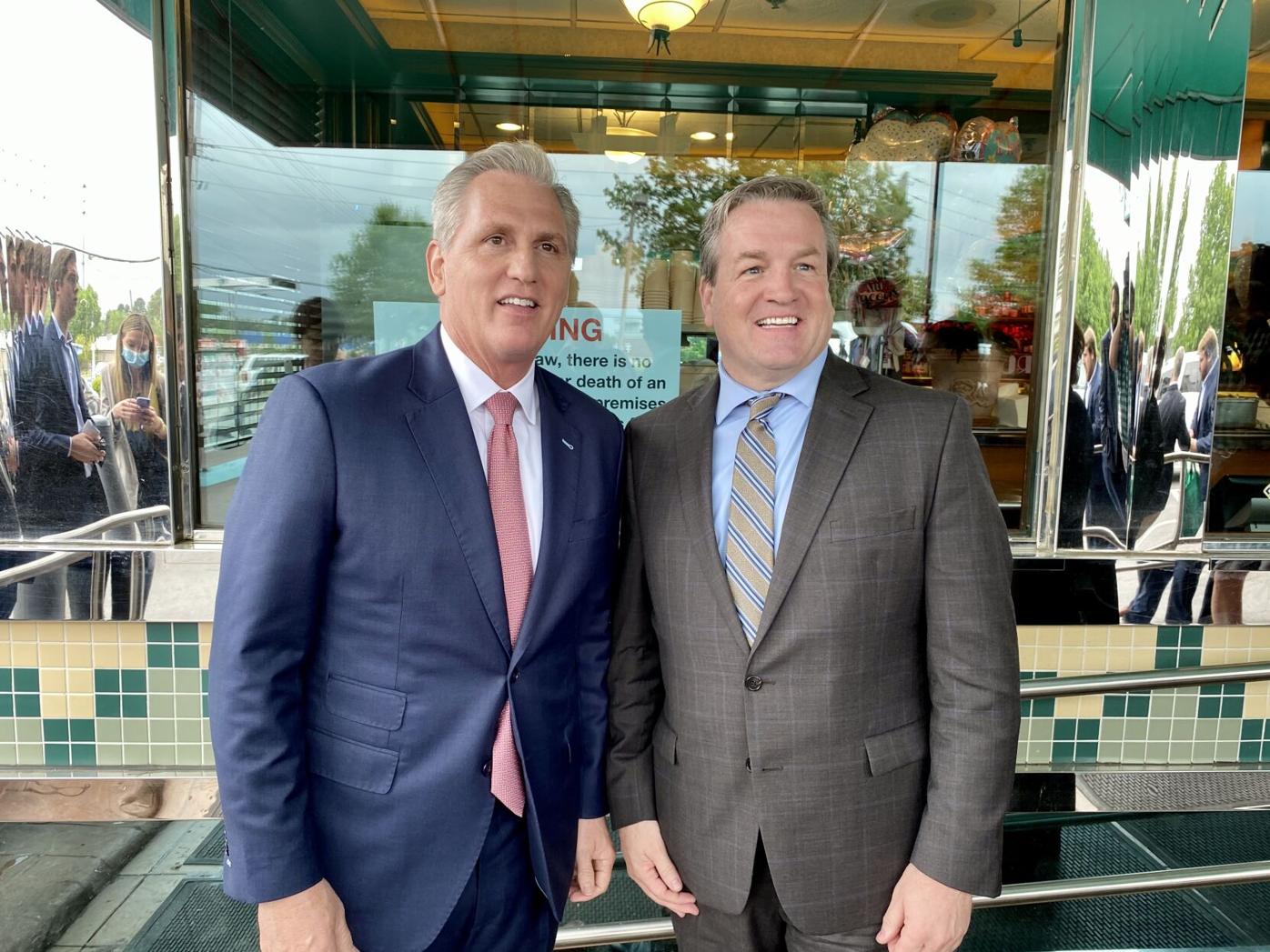 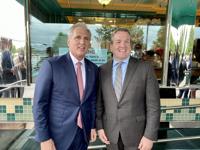 House Minority Leader Kevin McCarthy stopped by the Marietta Diner on Tuesday to meet with local business leaders impacted by Major League Baseball's decision to pull the All-Star Game from Georgia. To his right is John Loud, chairman of the Cobb Chamber of Commerce.

House Minority Leader Kevin McCarthy stopped by the Marietta Diner on Tuesday to meet with local business leaders impacted by Major League Baseball’s decision to pull the All-Star Game from Georgia. To his left is U.S. Rep. Barry Loudermilk, R-Cassville.

Brent Brown, owner of Chesley Brown International, speaks to the media at the Marietta Diner on Tuesday.

Former Cobb Chamber of Commerce Chairman Mitch Rhoden speaks to the media during the press conference at the Marietta Diner on Tuesday.

House Minority Leader Kevin McCarthy stopped by the Marietta Diner on Tuesday to meet with local business leaders impacted by Major League Baseball's decision to pull the All-Star Game from Georgia. To his right is John Loud, chairman of the Cobb Chamber of Commerce.

MARIETTA — Amid the clink of silverware and the din of patrons chattering during their lunch break, U.S. House Minority Leader Kevin McCarthy blamed President Joe Biden for Major League Baseball’s decision to move the All-Star Game from Georgia during an appearance at the Marietta Diner Tuesday.

Major League Baseball cited the bill, which Biden called “Jim Crow on steroids,” when announcing its decision to move the Midsummer Classic from Cobb County’s Truist Park. The bill was passed along party lines, with no Democratic support. MLB later said the game would be played at Denver’s Coors Field.

McCarthy shared the makeshift lectern, feet from the diner’s lunch counter, with U.S. Reps. Barry Loudermilk, R-Cassville, and Drew Ferguson, R-Newnan, as well as local business owners who said MLB’s decision was yet another blow in what has been a very difficult year.

“I wish this administration would come here and listen to these voices, because (the administration) encouraged, it seems to me, encouraged the game to be played somewhere else,” McCarthy said.

Brent Brown, a former chairman of the Marietta Museum of History who employs some 1,800 people as owner of Chesley Brown International, said dealing with unforeseen challenges is par for the course as a business owner.

“You don’t build a company ... without these challenges,” he said. “But this is one after another.”

First came the coronavirus, he said. Then the federal government’s slew of relief programs which, he asserted, are paying people more to stay home than businesses can afford to pay them to work.

“So recruiting (cost) goes through the roof,” Brown said. “And now we get the challenge of Major League Baseball, taking another opportunity away from not just the business people and entrepreneurs, but the hard working men and women out there.”

Futren Hospitality CEO Mitch Rhoden, a former chairman of the Cobb Chamber of Commerce, said Tuesday’s event put a face on the people impacted by MLB’s decision, which, he continued, impacts “small businesses and businesses that you never hear about — not Coca-Cola or Delta or big businesses, but small businesses, which really make up the fabric of our community.”

Some economists who have studied the impact of past All-Star games have found little evidence they produce a financial windfall for the surrounding community.

“Major League Baseball owes the state of Georgia an apology, particularly to those small businesses that they have hurt so badly,” he said. “By the way, corporate CEOs, many of them, they still are not responding to some very basic questions that have been asked about why they did what they did.”

Georgia Republicans have slammed the CEOs of Delta Air Lines and Coca-Cola for voicing their opposition to the election bill after it was passed. When asked whether he wished Delta ill, Ferguson said his issue was with the company’s CEO, who had lost his “moral compass” on the issue.

“I happen to represent more Delta employees and their families than any other member of Congress, and we’re standing with them,” he said. “We’ve had many of them come to us and say, ‘Thank you for being our voice, we are afraid to speak up, we’re afraid for our jobs, we’re afraid of the hostile work environment that’s been created there.”

Although the elections overhaul bill was drafted and passed by state Republicans, McCarthy said it was Biden’s “misinformation” as to what the bill does that pushed MLB to move the game.

“I wish Major League Baseball would learn the lesson from this day, to not make a rash decision, (to) make informed decisions, to read the bills before they make judgment,” he said. “This movement in this country about wokeness has got to stop. We can disagree on things, but let’s base it upon facts.”

Speaking after the press conference, McCarthy said his message would have been no different had MLB moved the game from Colorado had its legislature expanded abortion access or restricted gun owners’ rights.

“I go to my baseball games to watch baseball,” he said. “I respect people I disagree with, and I think they have a right to their difference of opinion, but I don’t think baseball is a place to play politics.”

Gus Tselios, owner of the Marietta Diner, said he and his chef had started preparing an All-Star-themed menu before MLB’s decision. They’ve since scrapped the menu and are hoping to do something special should the Braves make a playoff run.

Tselios said he was disappointed by the All-Star Game’s move “more as a sport fan” than as a business owner.

“We’re always busy,” he said. But, with the All-Star Game, “we were going to be busier.”

If you voted democratic and this MLB game cost you money. Don’t complain. You wanted this and you got it.

3 people think this article is "funny" but you can't back up your thoughts can you? Since you are dying laughing, please let us all in on what's so "funny" about losing the All-Star Game.

The fuel crisis is over, but your local gas station may still be running on empty

N.J. among nation’s worst in making sure elections are secure. Why haven’t we fixed that?