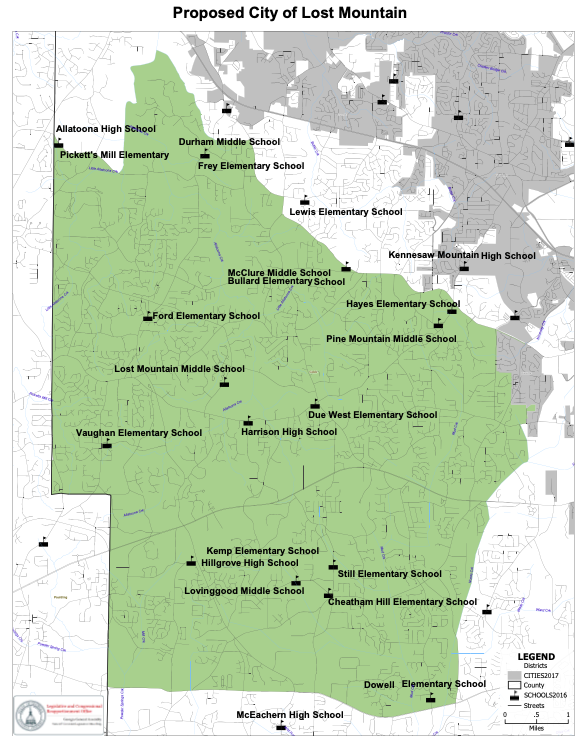 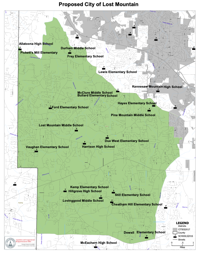 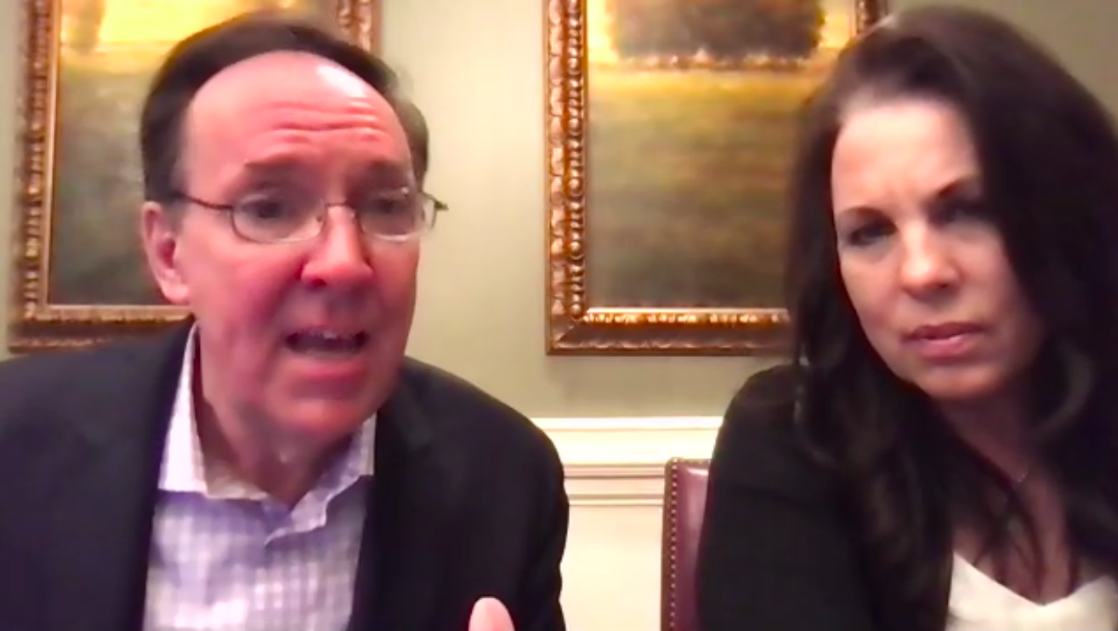 If all goes according to plan, the proposed city of Lost Mountain in west Cobb would be up and running by summer of 2023, according to a trio of Republican lawmakers who spoke at a townhall Thursday night.

The push for west Cobb cityhood went public last week, when an advocacy group, the Preserve West Cobb Citizens Alliance, launched its webpage, and the lawmakers — state Reps. Ginny Ehrhart, R-west Cobb; Ed Setzler, R-Acworth; and Bert Reeves, R-Marietta — detailed their vision for a “city-lite” in west Cobb in an interview with the Marietta Daily Journal.

The lawmakers say the recent shakeup on the county’s governing board makes development in west Cobb more likely, threatening its semi-rural character. In the November elections, Democrats took a majority of seats on the five-member board for the first time in decades.

At Thursday’s townhall, Ehrhart, Setzler, Reeves and Scott Johnson, executive director of Preserve West Cobb, said the proposed city would have minimal staffing; control zoning, code enforcement and waste management; and have built-in measures, such as a supermajority requirement for certain changes, to ensure the city does not stray from its low-growth, small government purpose. They also said the city would not offer its own police or fire services or have any impact on the county school system.

They shared some new details Thursday.

As envisioned, the city would have a mayor and six councilmembers, all of them representing certain districts but elected at-large.

“The idea of at-large elections is making sure that everybody is the constituent of every council member and mayor, that members are all accountable to every citizen,” Setzler said.

Members of the council would serve staggered four-year terms, meaning some in the first batch of candidates would run for two-year terms. After two years, their seats would open for a full term.

Although the lawmakers aim to limit development within the proposed city’s boundaries, they identified several “activity centers” appropriate for controlled development on Mars Hill, Due West, Lost Mountain and Macland roads as well as Barrett Parkway and Dallas Highway.

Setzler also gave a new estimate for the city’s population, which he said would be between 70,000 and 72,000 people.

The University of Georgia will study whether the proposed city is financially feasible — whether expected revenues will cover expected costs. Thursday, the lawmakers said the study will cost around $25,000 and likely be completed by early August. Reeves said he had personally donated $10,000 toward the study.

That study will determine, among other things, whether the city would have to levy its own property tax to fund the limited services envisioned.

“I think everyone that would be affected by the city … believes that west Cobb in its state today is worth saving and protecting and us being in charge of our own destiny,” Johnson said. “That’s worth a few bucks. Although our effort is going to be to make it as revenue neutral as absolutely possible.”

Cityhood is a two-year process in Georgia. A lawmaker must file a bill detailing the proposed city in year one. In year two, the General Assembly votes on the bill, which, if approved, would send a referendum to residents of the would-be city.

Ehrhart plans on filing such a bill by month’s end. If approved by the General Assembly next year, the referendum would go before people living within the proposed city’s borders in November 2022. Elections for mayor and city council would be March 2023, and the government would be operational several months after that.

Johnson and the lawmakers encouraged those on the call to spread the word in their communities.

“This is not an effort for a few, but it’s an effort for many,” Johnson said, adding that he’s been making the rounds in west Cobb himself. “I found out that Lowe’s and Home Depot are great places to find your neighbors that own homes.”

In 2019, pro-cityhood groups emerged in east Cobb and Mableton, although bills filed on their behalf failed to make it out of committee before the end of the two-year legislative cycle. Both groups said they would continue to advocate for cityhood. No bills establishing a referendum on cityhood in Cobb have been filed this legislative cycle.

How will you justify another level of taxes as a way to keep West Cobb out of the clutches of the Newly Elected Evil Dems...y'all must think a housing project is going to be built on Dallas Highway or something...its going to be ok people - relax!!