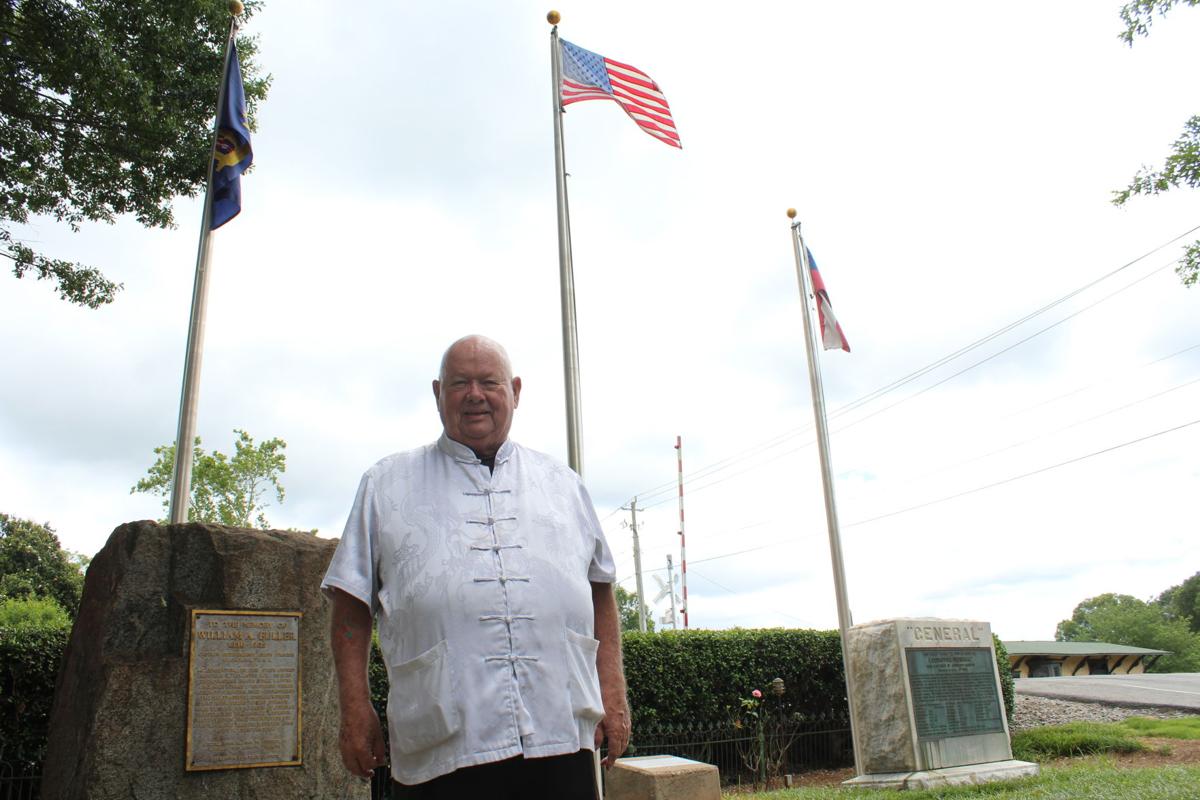 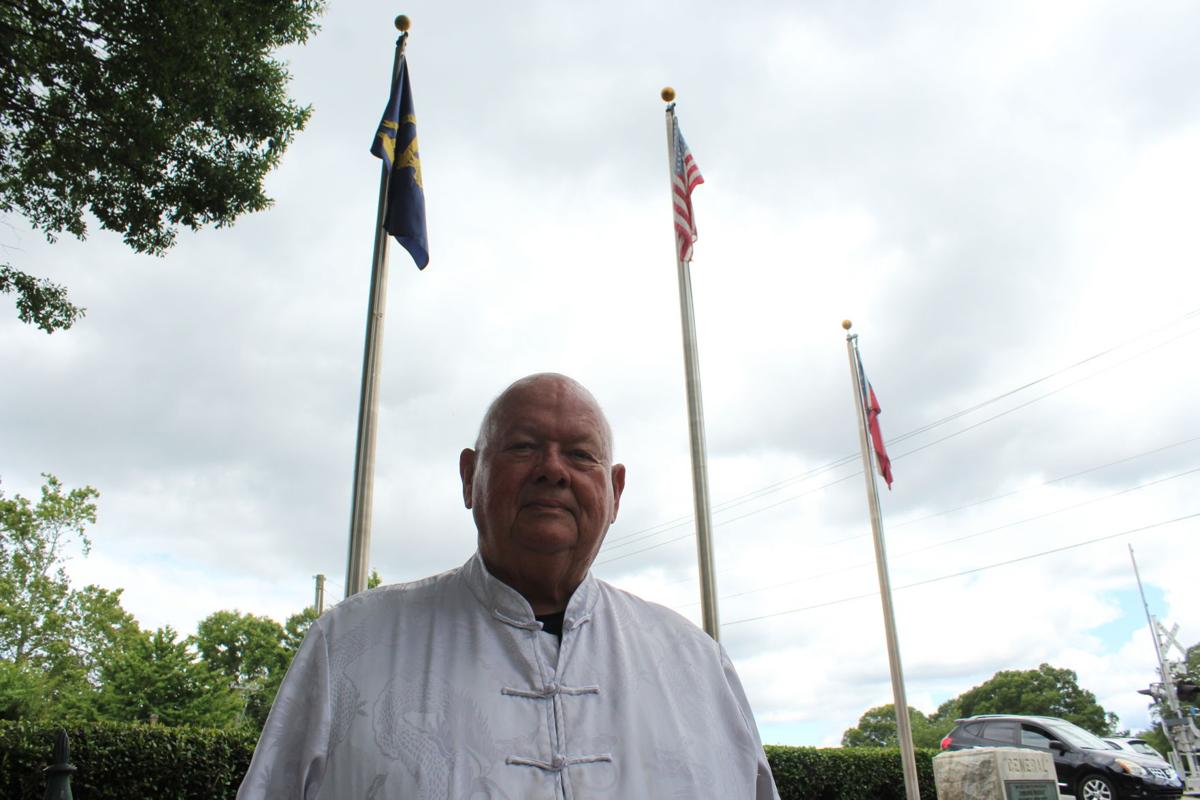 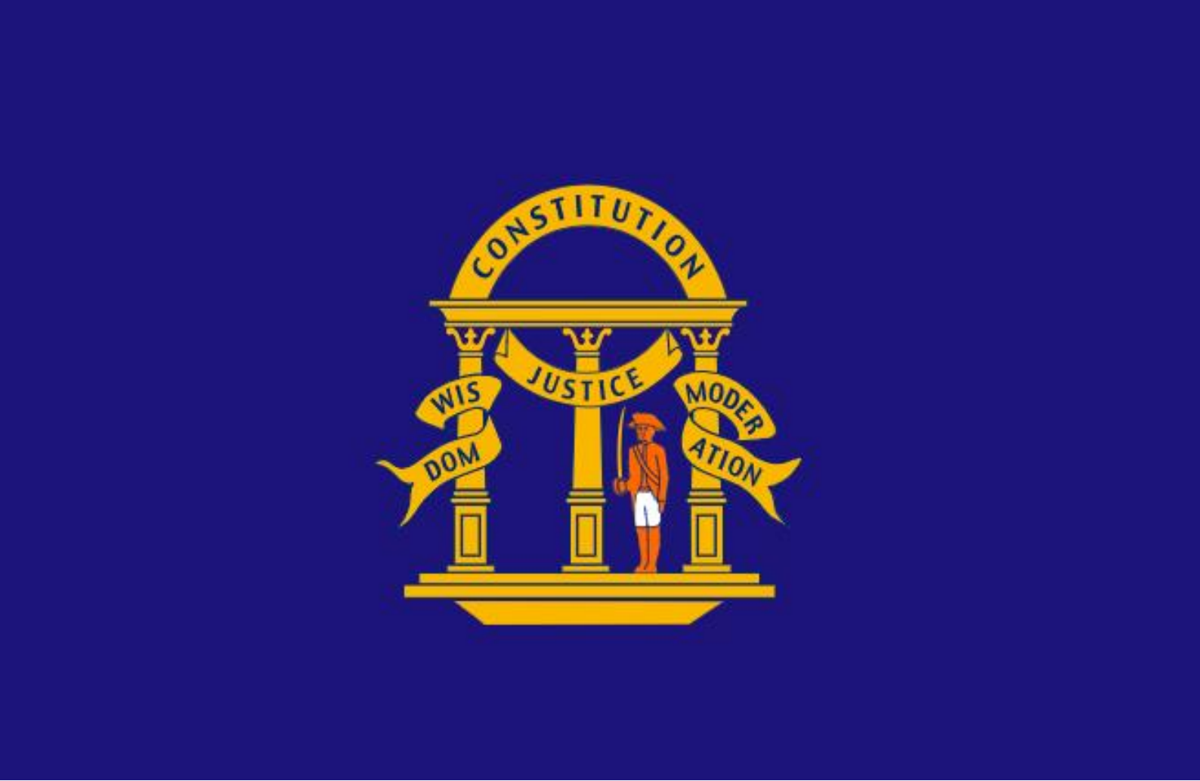 This Georgia state flag, which flew at the beginning of the Civil War, has replaced the Confederate battle flag at Commemorative Park in downtown Kennesaw.

KENNESAW — A commonly recognized Confederate symbol is no longer flying above a public memorial in downtown Kennesaw.

The Kennesaw City Council voted unanimously Monday to make the removal of the Confederate battle flag from its Commemorative Park permanent. Tuesday, a historic Georgia state flag was flying in its place next to the United States flag and the current Georgia flag.

When someone cut the rope and took the flag, prior to recent protests in Kennesaw, council members agreed not to replace it, even if doing so would violate the state law.

By the end of their meeting Monday night, the council voted for a replacement that they argue satisfies the state law’s requirements: the Georgia state flag that flew during the Great Locomotive Chase of 1862, which is referenced in a monument at the flagpole.

Councilman James “Doc” Eaton said that council members reexamined the state law and determined that it allowed for the city’s interpretation of the monument, and the historic state flag fit that.

“I’ve been wanting to get that St. Andrew’s cross off the flagpole in downtown Kennesaw ever since we’ve been in downtown,” Eaton said. “We needed the flag off. We have people that were literally scared to come into downtown, people of color, friends, people outside of the county that didn’t really understand what it meant. And we decided we, as a council, decided that we were going to take a firm stand, do the right thing and remove that flag from downtown.”

Eaton said that the majority of residents who spoke out at the over two-hour meeting supported removing the battle flag.

Residents speak out One of the speakers calling for the rebel flag’s removal was Kennesaw State University student George Williams IV, who said he was concerned for himself and other black students because of the flag. He also referred to the Confederate symbols and other paraphernalia at Wildman’s Civil War Surplus across the street from the monument.

“As a member of the black community myself, and I go to a school that prides itself on diversity and inclusion, it is almost laughable that if I travel too far down the street, then I will see a flag and I will see various symbols that stood against diversity and inclusion of people that look like me. It is imperative that this flag and all representations of the rebellion against my own rights are removed for the safety and well-being of the growing black community of Kennesaw State University,” he said. “So please, with all deliberate action, remove the Confederate flag, remove Wildman’s, remove all forms of the Confederacy that still sit in Georgia, in the state I’m happy to call my home, but plagued to live in right now.”

Matt Southwell, 1st vice chairman of the Cobb Democratic Party, said the flag represents people who went to war against the United States and its values, and argued that history should be preserved in context through museums and other educational means.

“With the movement going on right now in the country for racial justice, for a more just society for all of us, having that flag still flying in Kennesaw is holding us back,” Southwell said. “We are a nation of progress. We have moved forward so many times in so many ways over the past couple hundred years. Even today with the Supreme Court ruling that employment protections extend to the LGBT community, we keep moving forward, but that flag is holding us back. It’s time to take a stand and do whatever it takes to take it down so that we can move forward.”

‘Breaking your oath’Others cited the state law governing historical monuments, arguing the elected officials would break it by changing the flag at all. Former Councilwoman Debra Williams told the council she would file a criminal complaint “to have you arrested.”

“You are not to base your decisions on your opinions, likes or dislikes,” she said. “You are required by the oath each of you took to base your decisions on the laws and ordinances of the state of Georgia, Cobb County and the City of Kennesaw. Otherwise you are breaking your oath that you swore to in a room full of witnesses and should immediately be removed from office if you make that decision. You will be no less than the rioters, looters and killers that are ravaging our cities across the nation at this time, breaking our laws.”

State Rep. Ed Setzler, R-Acworth, presented the historic flag, which consists of the Georgia seal on a blue field, to the council at their Monday meeting. He said Tuesday that he was proud of the way city leaders handled the situation.

“I was heavily involved with working with council, city leadership and the city attorney to identify a historically correct flag and put a plan in place within Georgia law to be able to display that (at the park,)” Setzler said. “I think the council was wise to do it as they did it. I think it was the result of thoughtful deliberation.”

Lawsuit looming?The Georgia division of the Sons of Confederate Veterans sent a letter to city officials saying they would file suit against the city after the council indicated they would remove the flag last week.

Martin O’Toole, a spokesman for the division, said Tuesday that the officials were violating their oath of office by removing the Confederate flag.

“Probably under the advice of council, they’re modifying their position and saying they will fly a Georgia flag that flew briefly at the start of the Civil War...This is a complete departure from everything they’ve said earlier, so we know it’s just a pretense,” he said.

O’Toole said he expects the organization to file suit sometime next month.

When a civilization forgets its ancestors, they soon stop thinking of their descendants.

It must be appropriate to wear a Chinese shirt when the Confederate flag is being replaced........

Dent Myers for Mayor of Kennesaw !