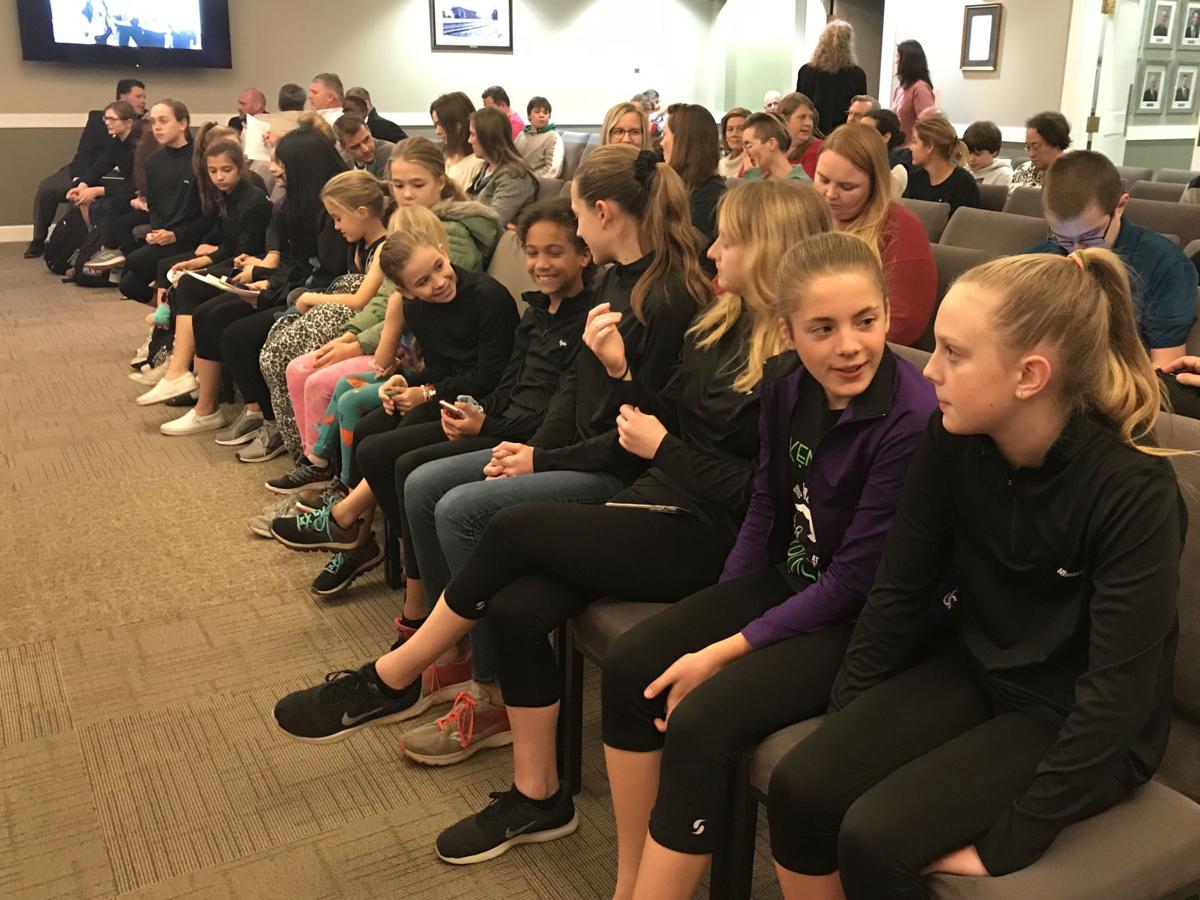 Rebecca GauntKennesaw gymnasts turned out in force to listen to the City Council’s discussion on moving the gymnastics center to phase 1 of the new recreation center. 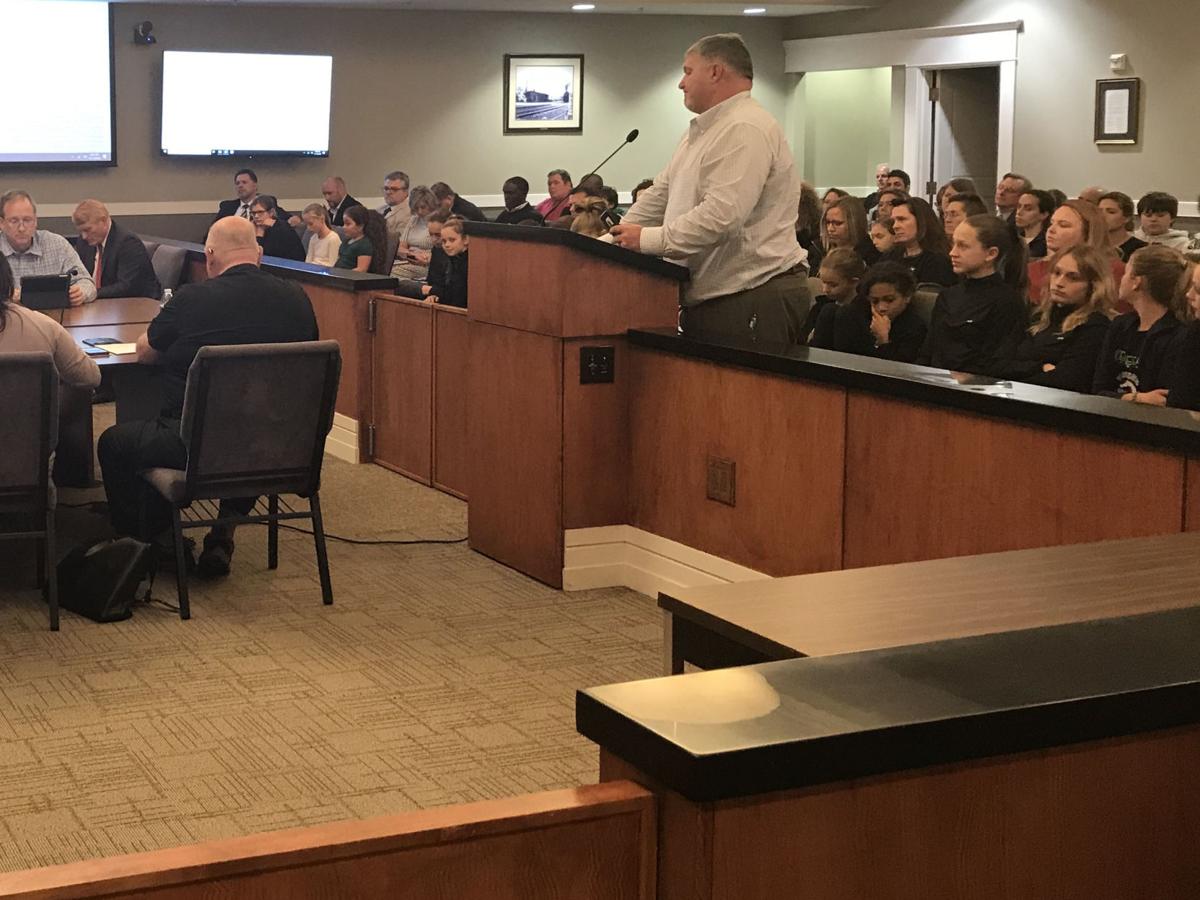 Rebecca GauntKennesaw gymnasts turned out in force to listen to the City Council’s discussion on moving the gymnastics center to phase 1 of the new recreation center.

City officials say architects have stopped work on the partially completed construction drawings of Kennesaw’s new recreation center to be built in Adams Park and warn late changes to the project could drive up the cost and delay its opening.

The estimated $11 million to $12 million recreation center is being built in two phases and will be funded by two different Special Purpose Local Option Sales Tax cycles, provided the 2022 SPLOST is passed by Cobb voters next year.

At issue is a planned gymnastics facility, which was moved to phase 2 of the project in August. Parents and coaches of the gymnastics program want the new gym to be included in phase 1. They say the current facility is unsafe for its athletes and the space is too small to accommodate proper equipment.

While City Council members were receptive to moving the gymnastics facility to the first phase of the project, City Manager Jeff Drobney told them making changes now would result in a six-week delay and a nearly $40,000 change order.

In an email to the council and mayor, he listed additional reasons city staff is recommending keeping the current design.

He included keeping the line of sight from the front desk into the gyms for security reasons. The original plan had the gymnastics center by the front desk and limited visibility into the other gyms. The gymnastics gym will be restricted to coaches, parents and students and does not need that kind of supervision, Drobney wrote.

He added two gyms as part of phase 1 will serve more residents by allowing a variety of activities, whereas gymnastics has approximately 250 participants per year, 52 percent of which are not Kennesaw residents.

The multi-use courts will be used for basketball, pickleball and volleyball, whereas the gymnastics gym will only serve the one sport, according to Parks Director Steve Roberts.

Drobney also said in his email establishing basketball, volleyball and other sports leagues will bring additional streams of revenue.

Gymnastics coaches Lori Cooley and Brooke Anderson previously told council members they believe their program could bring in $10,000 in one weekend for a tournament.

Council member James “Doc” Eaton said Monday he wasn’t sure he was open to spending money on a change order, but asked what it would take to build the whole thing in one shot, rather than phases, a request echoed by members Tracey Viars and Chris Henderson. City attorney Randall Bentley said he would need to look at the language on the ballot that was voted on first. Drobney questioned how it would be paid for all at one time without additional SPLOST funds.

Mayor Derek Easterling asked project manager Ron Smith what it would cost to complete both phases at once. He estimated $12 million to $13 million. Previous estimates from the city placed the total cost at $10 million to $11 million.

Council member David Blinkhorn pointed out that the numbers being presented to compare to the revenues from the gymnastics program were based on hypothetical programs.

“They aren’t any programs we are currently running. We currently have a gymnastics program that — I’ve often been asked, give me a guarantee — I guarantee if you build them a bigger gym, they will fill it. I can’t guarantee that we’re gonna steal any basketball players from Kennesaw Mountain ... from North Cobb,” Blinkhorn said.

He went on to ask if the parks department had reached out to any of those feeder programs, which it had not. He also addressed a comment about the number of non-resident gymnasts.

“The comment that half of our gymnasts come from out of the city, that’s fantastic,” Blinkhorn said. “They pay more money, which makes it cheaper for our city residents. We’re not turning away any residents that want to compete as far as I understand.”

Blinkhorn suggested funding the change order fee with the $30,000 savings from what was originally budgeted for a street sweeper, as well as the $50,000 contingency fund.

“Maybe we didn’t make the right decision at the beginning to say do the other first. Well, we have 50 grand to make it right,” he said.

Easterling closed the discussion by asking the staff to come back in two weeks with a solution for the council to consider for a vote.