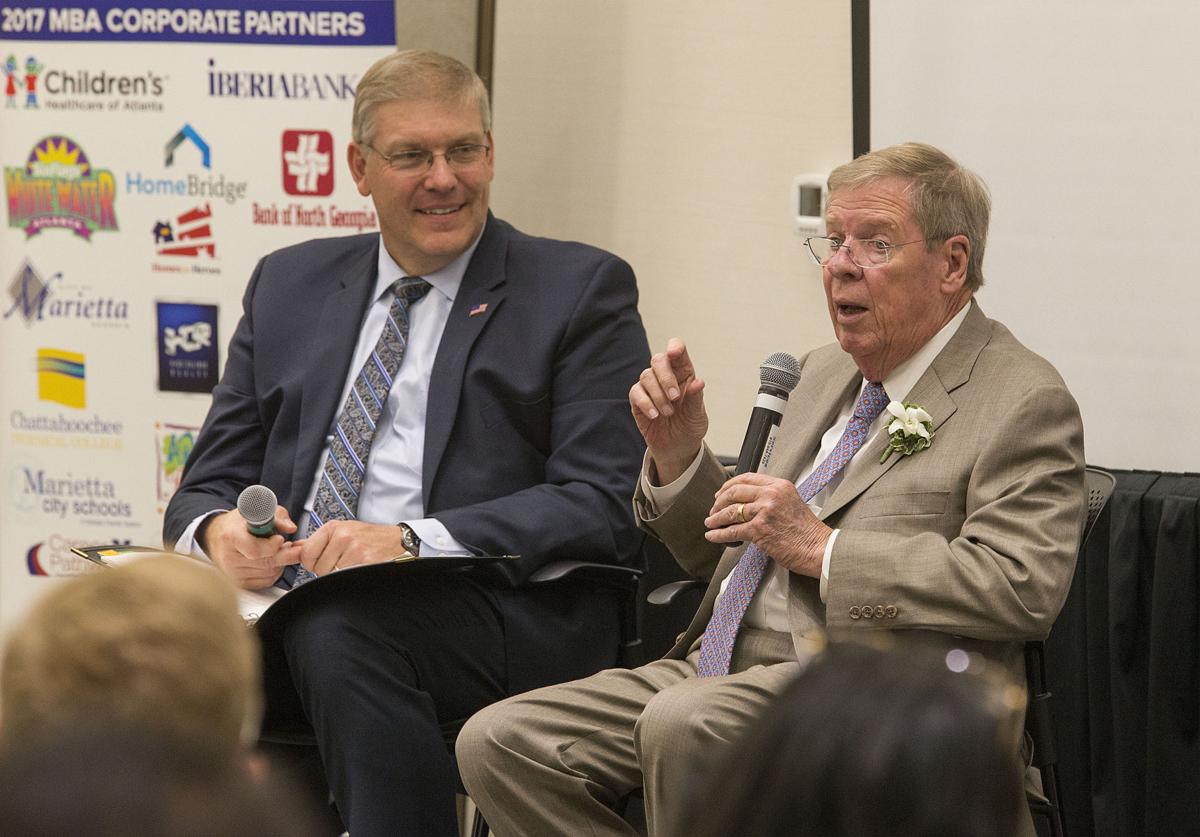 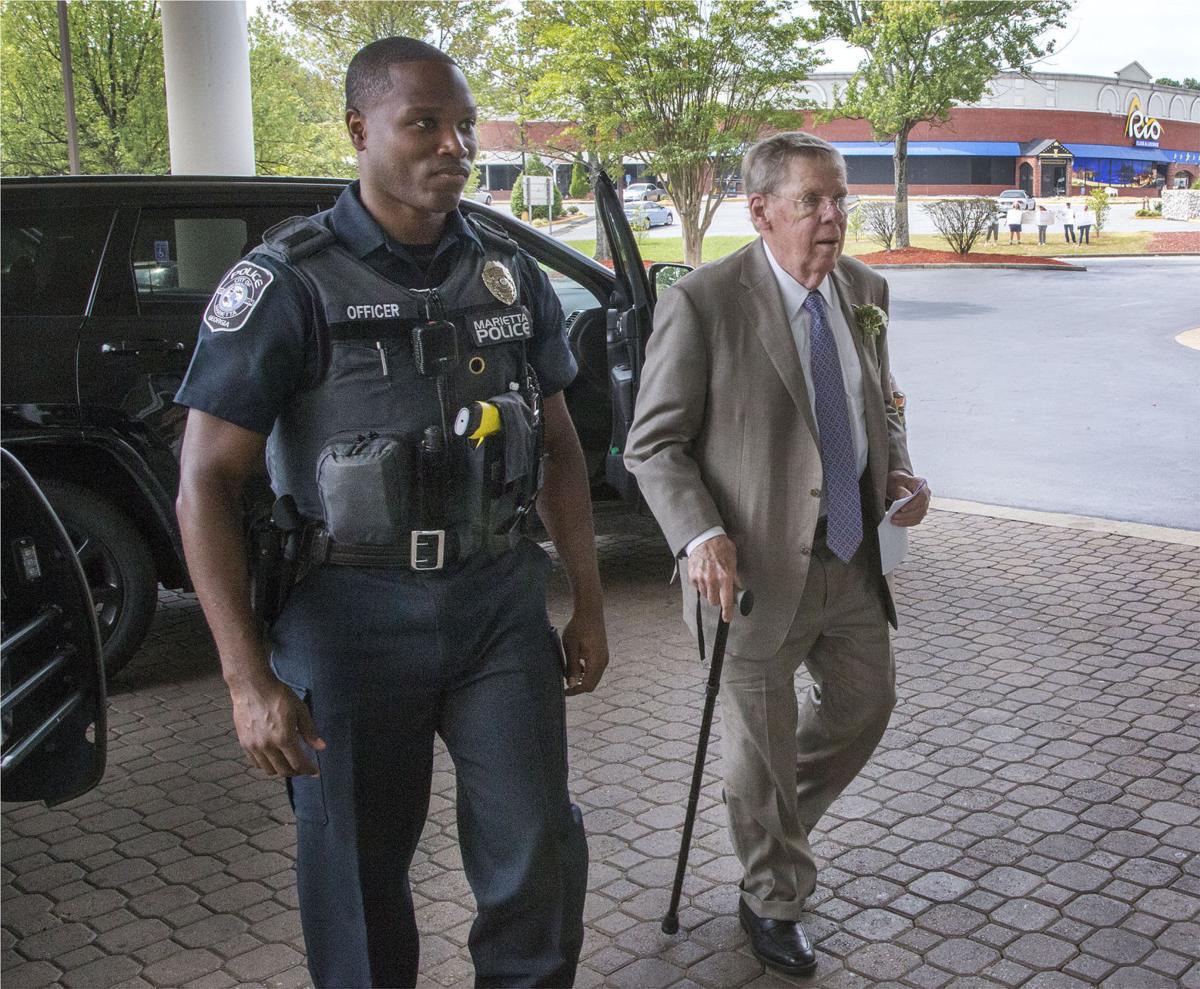 Sen. Johnny Isakson arrives at the Radisson Hotel Atlanta NW in Marietta on Monday for a Q&A session with U.S. Rep Barry Loudermilk at a Marietta Business Association event. 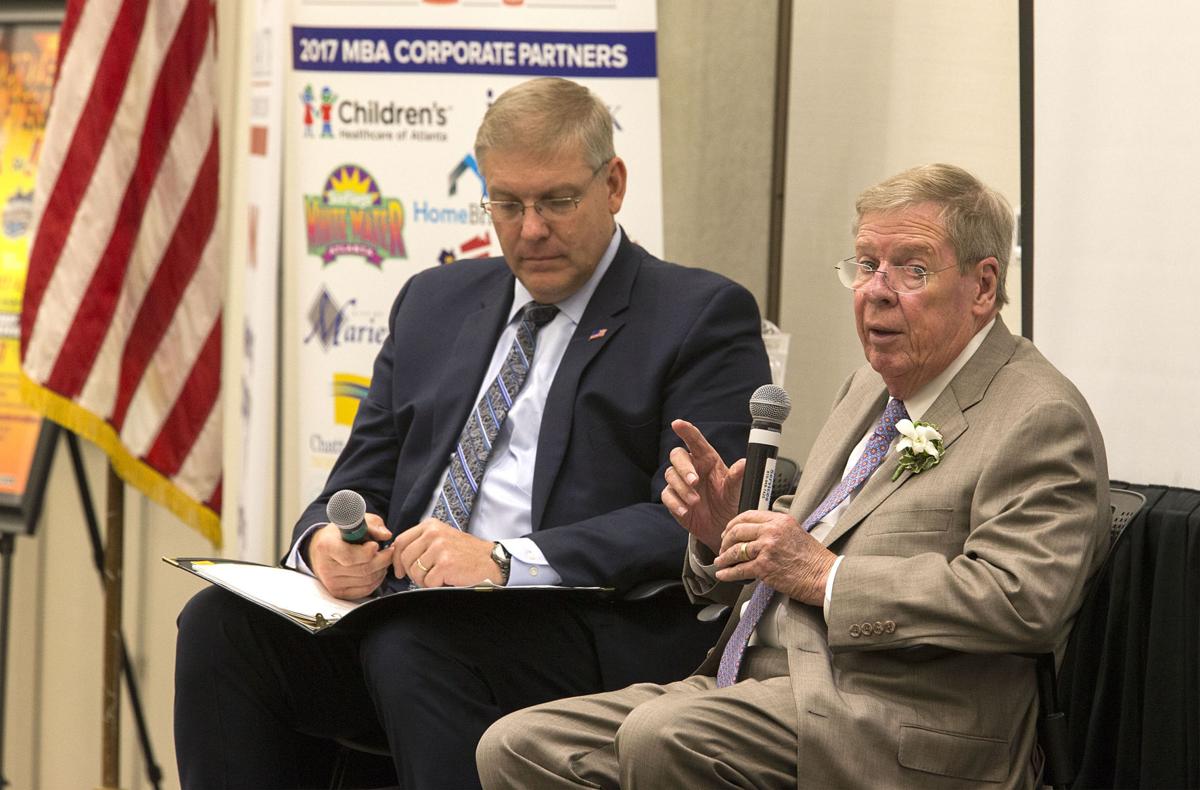 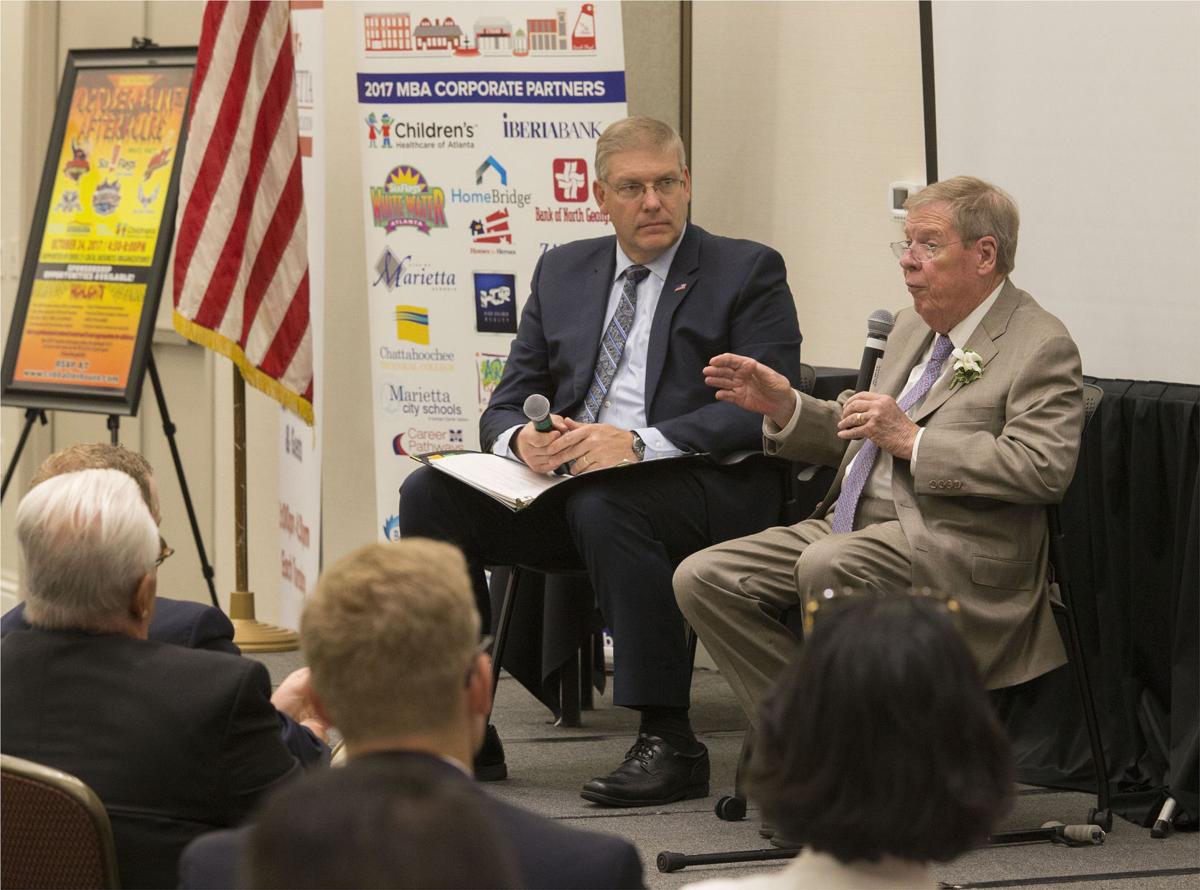 Sen. Johnny Isakson arrives at the Radisson Hotel Atlanta NW in Marietta on Monday for a Q&A session with U.S. Rep Barry Loudermilk at a Marietta Business Association event.

MARIETTA — U.S. Sen. Johnny Isakson, R-Georgia, dismissed President Donald Trump’s threat of shutting down the government if Congress did not fund a wall along the country’s border with Mexico. Isakson’s remarks Monday came after he spoke to Cobb business leaders about his and Congress’ priorities in the coming days, including the need to pass a budget for the next fiscal year.

Isakson told those in attendance at the Marietta Business Association’s monthly luncheon at the Radisson Hotel in Marietta that members of Congress return to work on Sept. 5, and in his 19th year in Washington, he had never seen Congress with “more to do and less time to do it than we have right now.” Among the most pressing needs, he says, is to pass a number of appropriations bills. Though he says House members have passed many of theirs, the Senate has not passed any.

“We’re going to have to do them in a continuing resolution, which means we’re going to continue to do all the bad things we’ve done the last 10 years …That’s not the way to run a government,” Isakson told those in attendance. “It’s time we did what you did in your house — sit around that kitchen table in Washington, decide where we’re going to prioritize our money, prioritize our money appropriately, spend enough and give some money back to folks rather than trying to find a way to spend it. We’ve got to start running this country like you run your home — if we don’t, we’re going to be in desperate, (dire) straits.”

Trump last week threatened a standoff regarding his plan for a southern border wall, saying “If we have to close down our government, we’re building that wall.” But Isakson told the MDJ that he did not want to see such a government shutdown.

“Shutting down the government never does anything. It doesn’t save you any money, you can’t get anything done, people on Social Security don’t get their checks, you put off solving the problem and make it more expensive in the future,” he said. “It’s the easiest threat in the world to make, but it’s one that if you ever deliver on it, which Newt Gingrich did back in 1996, you have a disaster like we had in 1996, so it’s not going to happen.”

“It depends on the topography, the throughput. Smuggler’s Gulch in California is the best example — you use the throughput of the topography of Smuggler’s Gulch to kind of force everybody who is trying to get into the country through one place where you can kind of corral them all. You use nature to your advantage — they do things for you that walls otherwise could do, but you don’t need them because of that,” he said.

Arpaio was accused of prolonging patrols for 17 months after a judge had ordered them halted so he could promote his immigration enforcement efforts in his 2012 re-election campaign, in which he was ultimately successful.

Isakson on Monday declined to share any personal thoughts on Trump’s decision to pardon Arpaio. “The presidents have that authority,” he said.

Before Monday’s luncheon, Isakson said he had been in Atlanta, attending the unveiling of a statue of Martin Luther King Jr. on the Georgia Capitol grounds. It was made public as calls are being made to remove other monuments, such as statues and displays honoring Civil War figures. King’s statue joins several other sculptures on the Capitol grounds, from Confederate Gen. John B. Gordon and segregationists Sen. Richard Russell and Gov. Eugene Talmadge.

Isakson alluded to the statues found in the U.S. Capitol’s National Statuary Hall Collection when asked by the MDJ if Congress should take action amid a growing call to take down statues of Confederate figures.

He said that removal of any statues from the collection should be left up to the states that put the artworks into the collection.

The collection, according to the Architect of the Capitol’s website, features two statues from each of the 50 states. One of Georgia’s two statues is a depiction of Alexander Hamilton Stephens, who was born near Crawfordville in Taliaferro County in 1812 and went on to serve as vice president of the Confederacy. His career also saw him serve in Congress, and in his last few months of life, as Georgia’s governor.

One of Alabama’s statues, meanwhile, honors a Georgian, Joseph Wheeler, who was born near Augusta in 1836. Wheeler became a Confederate lieutenant general, and after the war, he went on to serve as an Alabama congressman. He is also the namesake of Cobb County’s Wheeler High School.

“The state legislatures determine the statues that are in the U.S. Capitol. There are three Georgians in the U.S. Capitol, all of those are because the states’ legislatures ask the federal government to put them there — if they come out, the states have to ask them to be removed,” Isakson said. “Mayor (Kasim) Reed and Gov. (Nathan) Deal both set the tone today — Mayor Reed has appointed a commission to come up with recommendations on dealing with the legacy of the Civil Rights era and the Civil War era, Gov. Deal has done basically the same thing. That’s the deliberate way you go about making decisions like that.”

The call to remove statues and memorials has come in the days following violence that erupted between protesters in Charlottesville, Virginia. U.S. Rep. Barry Loudermilk, R-Cassville, alluded to the coverage of and events since Charlottesville in his remarks at Monday’s luncheon before introducing Isakson. He accused the media of trying to build a “perception” that the country was more divided today than ever before.

“We just think we are more divided than we’ve ever been before. But that’s not the case,” Loudermilk said. “These extreme groups we hear so much about — of course I’m talking about Charlottesville — their memberships are at an historic low. There’s not enough in these extreme organizations to elect anybody into Congress, much less to influence public policy in a nation that was built upon the idea of freedom and liberty, and coming together into one ideal.”

— Information from the Associated Press was used in this report.

AROUND TOWN: In the coronavirus battle, is Cobb Co. flattening the curve?

Woman killed in two vehicle wreck on Prior Station Road