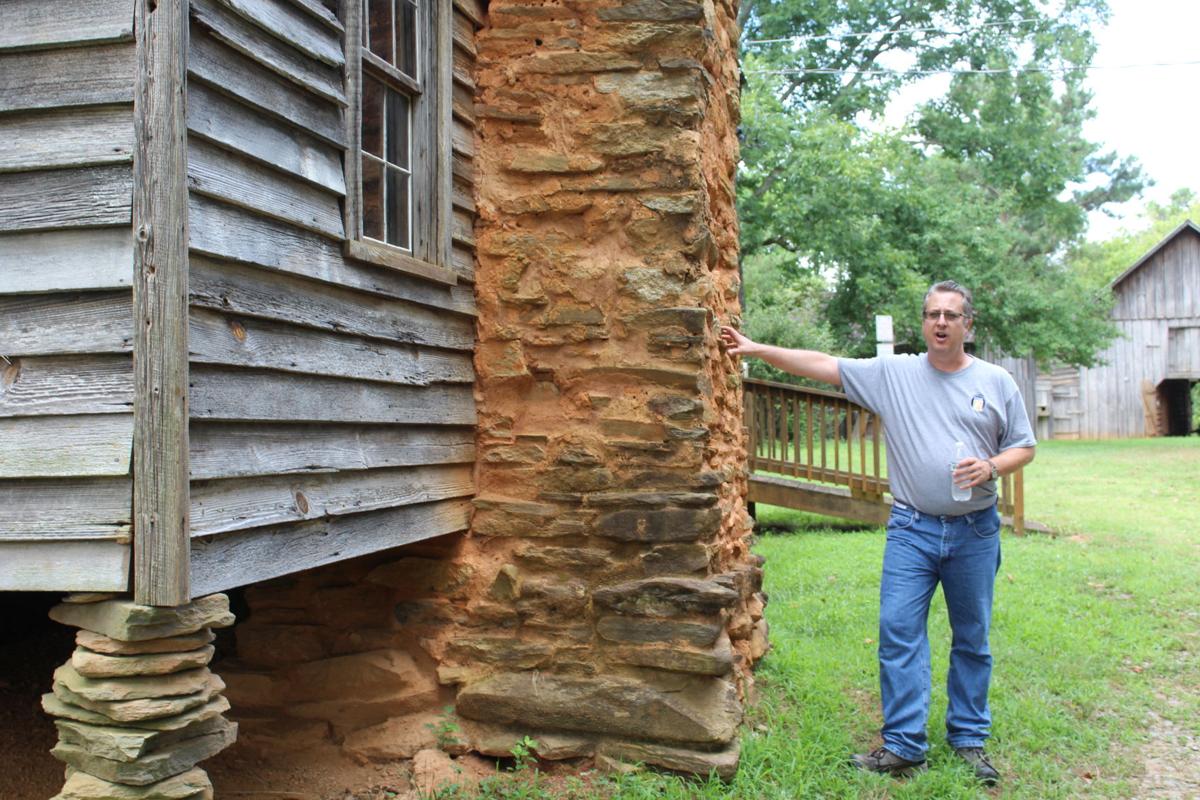 Cobb Parks Program Coordinator Kevin Hill said the fireplace was built using a technique that has nearly been lost to time and involves stacking stones with clay. In the foreground, the Powers family constructed their cabin on stone pilings to keep it off the ground. The stones have since been reinforced with steel beams. 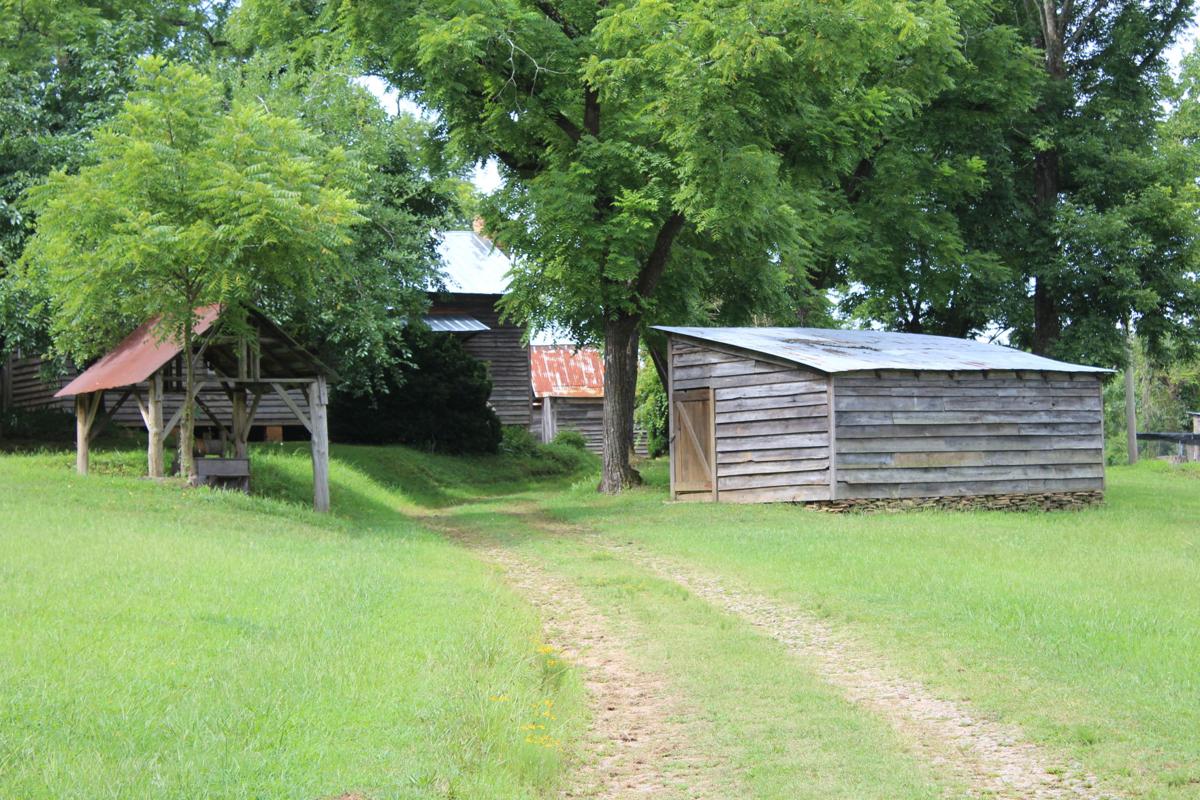 The entrance to Hyde Farm. In the foreground are the home’s original well and the broodhouse for newly hatched chicks. Behind is the original log cabin and barn. 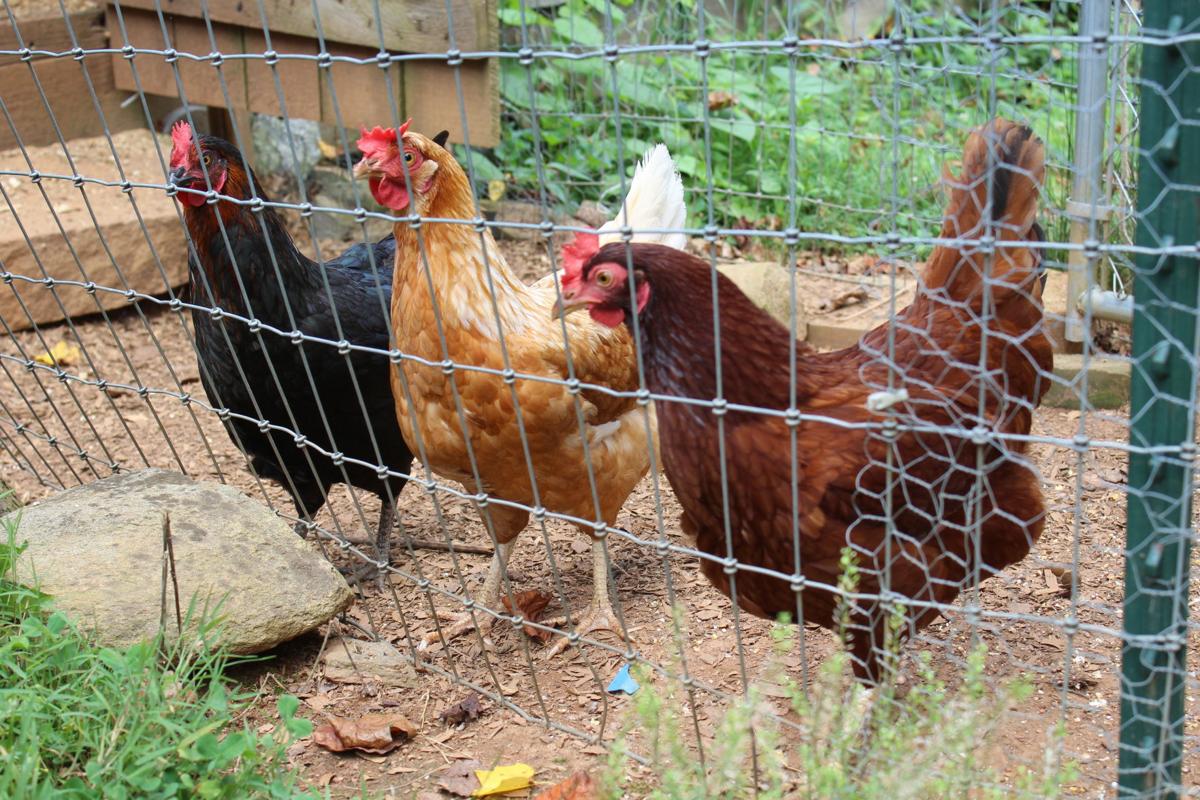 These three chickens are, for now, the only domesticated animal residents on Hyde Farm.

Cobb Parks Program Coordinator Kevin Hill said the fireplace was built using a technique that has nearly been lost to time and involves stacking stones with clay. In the foreground, the Powers family constructed their cabin on stone pilings to keep it off the ground. The stones have since been reinforced with steel beams.

The entrance to Hyde Farm. In the foreground are the home’s original well and the broodhouse for newly hatched chicks. Behind is the original log cabin and barn.

These three chickens are, for now, the only domesticated animal residents on Hyde Farm.

Not far from the busy east Cobb intersection of Johnson Ferry and Lower Roswell roads is a little piece of Cobb as it used to be.

The Power family — the same family nearby Powers Ferry Road is named for — originally started farming the land in 1840 and living in a log cabin there.

The Hyde family bought the land from the Powers in 1920.

Cobb County Parks Program Coordinator Kevin Hill said brothers J.C. and Buck Hyde lived off the land in the frontier style as strip malls and residential developments popped up all around them. The two were lifelong bachelors and lived in the cabin with no electricity or running water until they had utilities installed — on a doctor’s orders — in the late 1980s.

J.C. Hyde farmed the land with his mules, Jack and Nell, well into his 70s, living off of a small, monthly Social Security check and the money he received from selling his produce from the back of his pickup truck on Powder Springs Road near Marietta Square.

Hill said the brothers fought off many attempts from developers to turn the land into the type of suburbia that surrounds it.

“The Hydes promised to their daddy on his deathbed that they would never sell to a developer, and they were offered millions, multiple times,” he said. “The developers were always very puzzled that they would turn down all this money time after time, but they really had everything they needed. They really had no use for money, and it really would have been a sad thing had they ever been forced from that land.”

When Buck Hyde died in 1987, Hill said the farm was in financial trouble. The IRS wanted to tax the land at the same rate as the surrounding land, which J.C. Hyde could not afford.

“They would have lost the farm, quite literally,” Hill said. “Thankfully, they worked out a deal with the National Parks Service to purchase the lower 40 acres on the Chattahoochee, which is basically flood plain anyway, but they allowed the Hyde family to continue to farm that piece of property until their last days.”

After J.C. Hyde died in 2004, the land went to the Trust for Public Lands, which eventually sold parts of it to the county and the National Parks Service. The entirety of the farmland is now set aside for preservation.

That includes monthly tours of the grounds and several of the historic buildings on the site. While conducting one of those tours Saturday, Hill said the parks service hopes to someday hire a resident farmer to grow crops and tend to livestock at the farm so schoolchildren and other residents can better learn about how things used to be.

Currently, the only farm animal residents of the farm are three chickens, though two would-be barn-dwellers became well-known for almost moving in.

In 2010, the Cobb Board of Commissioners voted to buy two mules, dubbed Jack and Jill, to work the fields at the farm.

But the farm was not yet ready to be plowed, and the mules figuratively grazed on the taxpayers’ cash as the county spent thousands to transport and care for the unemployed ungulates. The pair became a target for budget hawks and humorists, including MDJ columnist Dick Yarbrough, who has made much hay out of the mules’ mishaps.

The two are now happily retired in Canada, Hill said, adding that the political will to purchase any more mules is likely to remain low.

“The likelihood of getting those again are probably not too good,” he said with a chuckle.

Hill said hiring a resident farmer is more of a long-term goal.

“We’re hoping to fill it in the next couple of years when the budget becomes available,” he said. “Once we do get a resident farmer, then we will be able to get some more animals at that point. To have animals, you really need to have a resident person on-site.”

For now though, Hyde Farm Park hosts a number of activities, including periodic cooking classes with recipes incorporating the fresh produce grown in the garden there. There is also a community garden where members of the public can rent plots to grow vegetables.

Though the doors to the cabin and the farm’s outbuildings are locked except during the monthly tours, visitors can see them from a distance from Hyde Farm Park’s trails during regular park hours.

A stocked fishing pond there will host one of two Cobb County fishing rodeos this year, scheduled to begin July 20 at 11 a.m.

Ken Lewis, an east Cobb resident who is retired from IBM, said the farm and the monthly guided tour is one of the county’s hidden gems. He took the tour Saturday.

“More people need to do it,” he said. “It’s a treasure right here, surrounded by all these modern homes, and I don’t think many people know about it. We live five minutes from here. My son was 1 year old when we moved here, we’ve lived here 45 years. This is the first time I’ve been here.”