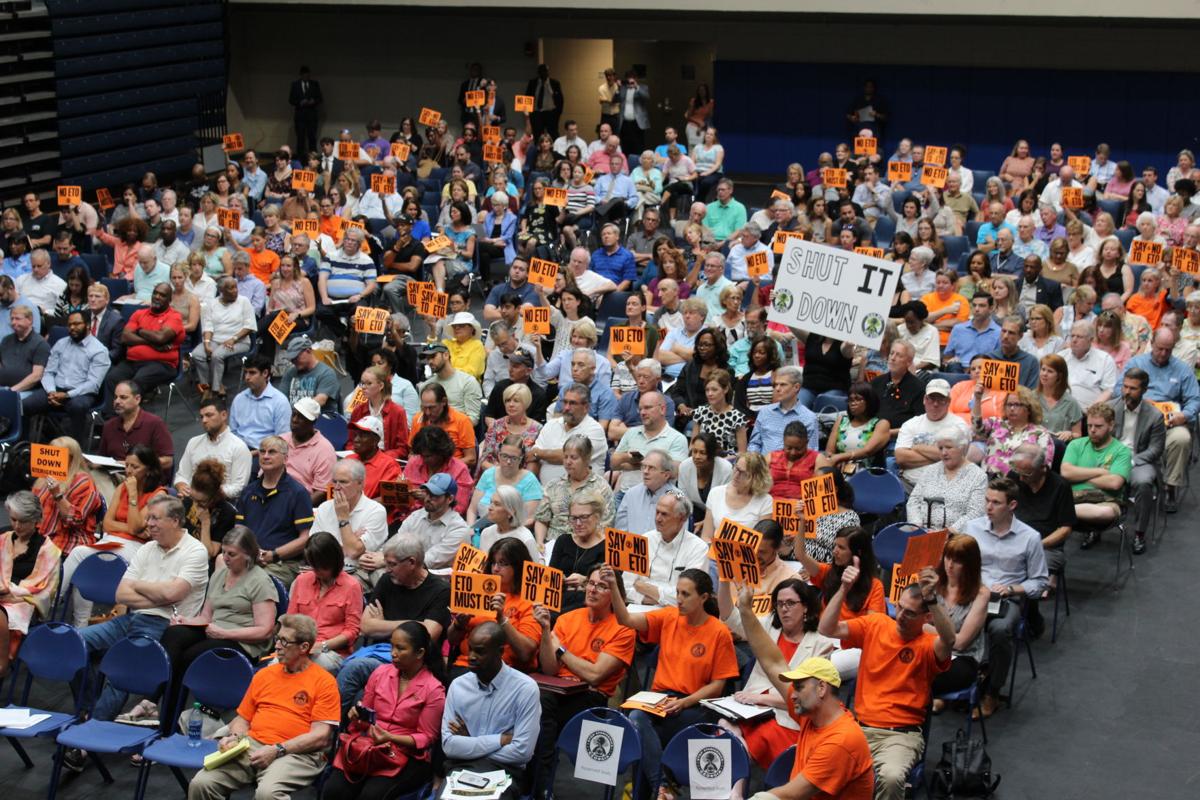 Many of the people attending a community meeting on Sterigenics and ethylene oxide in Marietta on Aug. 19 held up signs calling for an end to the use of the carcinogen in Cobb County. 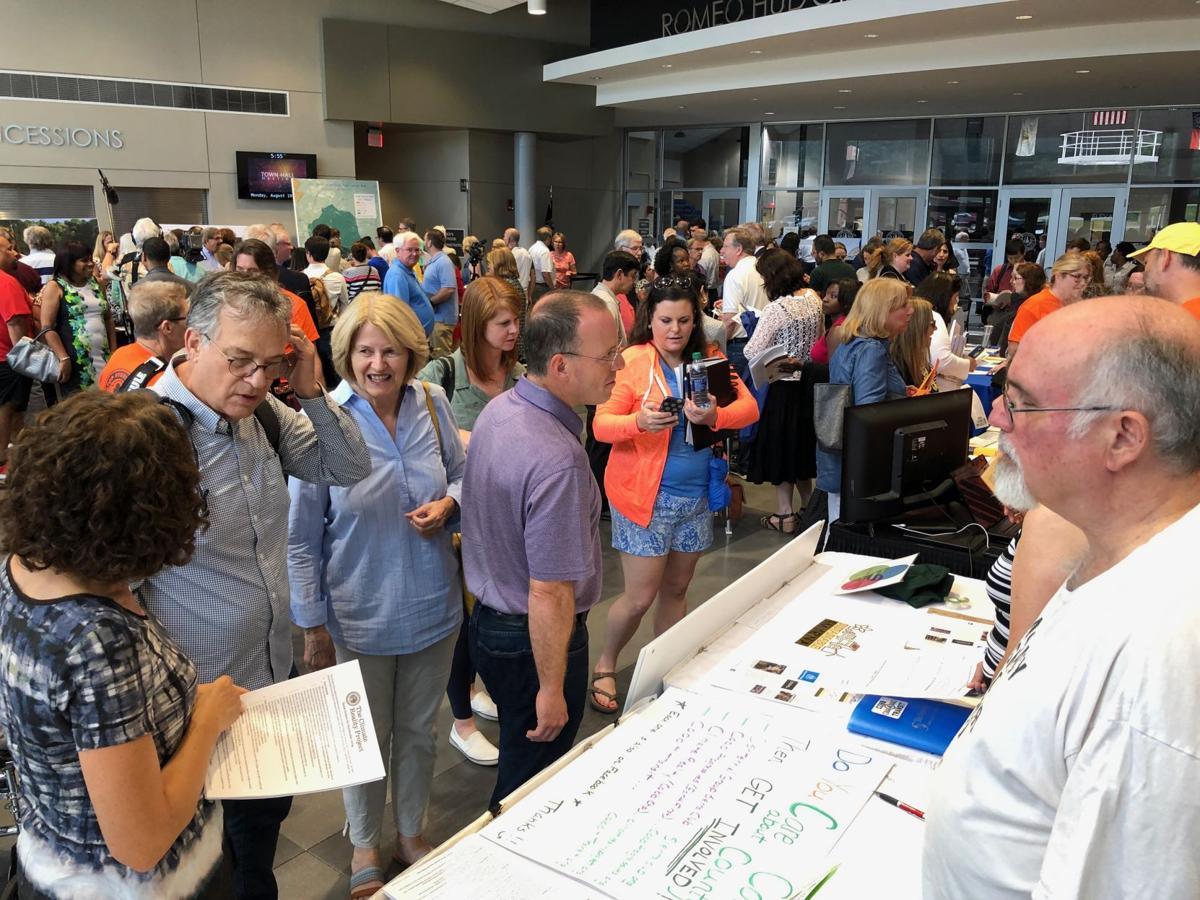 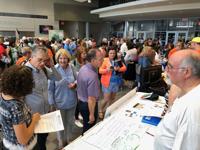 Many of the people attending a community meeting on Sterigenics and ethylene oxide in Marietta on Aug. 19 held up signs calling for an end to the use of the carcinogen in Cobb County.

MARIETTA — Hundreds of people attended an open house and community meeting Monday night on the issue of ethylene oxide emissions from Smyrna-area company Sterigenics, which uses the carcinogen to sterilize medical equipment.

The Georgia Environmental Protection Division and the U.S. Environmental Protection Agency hosted the open house and public meeting at the Cobb County Civic Center to share information about ethylene oxide, past and future air testing and monitoring around the Sterigenics site, and joint efforts by civic leaders representing affected areas to address the public’s concerns.

The issue has been worrying Cobb residents since a recent report publicized the fact that census tracts around Sterigenics have potential cancer risks of greater than 100 in 1 million due to higher than normal levels of ethylene oxide.

The EPA says the latest National Air Toxics Assessment, which identified the risk, dates back to August 2018, but residents were only made aware of the issue in the last few weeks.

In that time Sterigenics has received state approval to further reduce its ethylene oxide emissions, which already comply with regulation, and air testing has been ordered by the EPD.

The Smyrna and Cobb County governments have also partnered to get independent air quality tests done around the Sterigenics site, and may be joined in that effort by the city of Atlanta, which is also affected in parts by high levels of ethylene oxide.

Monday’s open house, from 5 p.m. to 6:45 p.m. in the civic center lobby, provided individuals an opportunity to browse information and talk one-on-one with representatives from the EPD and EPA as well as the Georgia Department of Health, the Centers for Disease Control and Prevention’s Agency for Toxic Substances and Disease Registry, and Stop Sterigenics Georgia — a grassroots nonprofit aiming to remove ethylene oxide emissions.

There were maps showing Sterigenics and the surrounding census tracts with some of the state’s highest concentrations of ethylene oxide, as well as information about its health effects and the methods of air quality testing.

Smyrna native Deborah Tompkins told the MDJ she attended the open house to find out if there were any alternative methods of sterilization that Sterigenics could use that don’t include ethylene oxide.

She didn’t get any concrete answers on that, but found the other information on hand helpful.

“It’s the first time I’m aware of this kind of risk factor that’s in our community,” she said.

Tompkins believes the EPA and EPD failed the public in not ordering independent air testing to properly determine the risk, and wants the government departments to do more.

The EPD says it will collect air samples at various sites every six days over the next several months, collecting data from four community locations ranging in distance from a quarter mile to a mile from the Sterigenics property.

The agency expects equipment to be in the field within the next few weeks and results ready in early November.

“This initial result suggests the presence of ethylene oxide not associated with an industrial source and is consistent with findings in other states,” the EPD states. “EPD is working with EPA to better understand non-industrial sources of ethylene oxide and will continue to collect regular air samples at the south DeKalb site and begin monitoring at a rural south Georgia location far from any industry or traffic in addition to monitoring in Covington and Smyrna.”

The open house was followed by a community forum in the civic center from 7 p.m. to 9 p.m., featuring a series of presentations from federal and state agencies involved, and answers to questions submitted by the public ahead of time.

The large seated crowd was dotted with bright orange signs saying “Say No To ETO” and other similar slogans which were handed out before the meeting by the Stop Sterigenics Georgia group and which meeting attendees waved high at different times in response to speakers’ comments.

Panelists, from the EPD, EPA, CDC and other agencies, first focused on the testing to date of ethylene oxide in and around Smyrna, as well as the additional testing planned for coming weeks and months, then explained some of the properties of ethylene oxide and what’s known about its effect on human health, as well as how cancer data is collected and analyzed in Georgia.

The EPA told those at the meeting it’s going to review the Clean Air Act regulations for facilities that emit ethylene oxide and gather additional information on the toxin in order to make industry recommendations as soon as possible.

Kelly Rimer, from the EPA’s Office of Air Quality Planning and Standards, said any risk to long term health greater than 100 in one million is generally the “upper end” of what the agency thinks is acceptable, and that’s what’s showing around Sterigenics.

“It’s not a regulation, it’s a level that we begin to really look closely to see if there’s something really going on,” she said.

Ken Mitchell, of the EPA, said background air levels of ethylene oxide are being monitored throughout the country, showing that there are higher levels of the carcinogen than first thought in areas where there is no known source of the toxin.

This includes in DeKalb County, where the EPD recently found an ambient air level of 0.31 micrograms of ethylene oxide per cubic meters of air.

“That’s about what we’re finding in those background samples around the country where there’s no known source of ethylene oxide,” Mitchell said. “Ethylene oxide may be a not uncommon chemical out in our air. There are sources that we know, there may be sources that we don’t know, and we’re trying to understand that better right now.”

Karen Hayes, from the EPD’s Air Protection Branch, said the recent test level was higher than expected and three more samples were taken last week that are currently being monitored.

In response to a question about why residents around Sterigenics weren’t notified sooner about the August 2018 NATA results, Mitchell said the EPA wanted to wait until it was able to better explain why ethylene levels were high in the area.

“We are going to figure out how we can communicate better with folks going forward,” he said, which brought jeers from the crowd. “We are committed to having a strong conversation with you, to hear your questions and concerns and discuss things with you to provide as up to date information as we can, and next time the National Air Toxics Assessment comes out we will be much more thoughtful about how we provide information to communities.”

Cherie Drenzek, of the Georgia Department of Health, said cancer prevalence in zip codes around the Smyrna area Sterigenics facility did not show any evidence of increased cancers on a whole as well as those associated with ethylene oxide, although she said more data needs to be analyzed.

“It’s known that ethylene oxide emissions do not travel further than a mile, she said. “It’s important for us to drill down further and what we really want to do is determine with certainty the data from a one-mile radius of the facility. We’re urgently working on this to get the best information possible, it won’t be available tomorrow but we’re diligently working on this analysis and look forward to sharing this information with you.”

After an energetic start, the large crowd had dwindled to about half its size by the end of the meeting at 9 p.m., when meeting organizers thanked those who had attended, praising the public for its interest and willingness to learn about the science behind the issue.

Gov. Brian Kemp pledged to meet next week with representatives from the Smyrna-area Sterigenics facility and a similar plant in Covington owne…

A day after Cobb commissioners approved an air quality testing proposal around a Smyrna-area facility, the city of Atlanta expressed its desir…

Cobb County will put forth $39,600 to cover its portion of independent air testing around a Smyrna-area plant being blamed for high levels of …

Cobb could accept price Tuesday for testing for toxic air

MARIETTA — Cobb commissioners could greenlight Tuesday more than $79,000 worth of independent air testing around a Smyrna-area plant being bla…

The city of Atlanta is moving forward with a plan to test the air near the Sterigenics plant in Smyrna adjacent to the Atlanta border.

Who wrote this article. The only name I found is below. Did she write it? If so who is she? If writers of LTTE have to give their names shouldn't the editors and ALL other employees of the MDJ also have to divulge same?