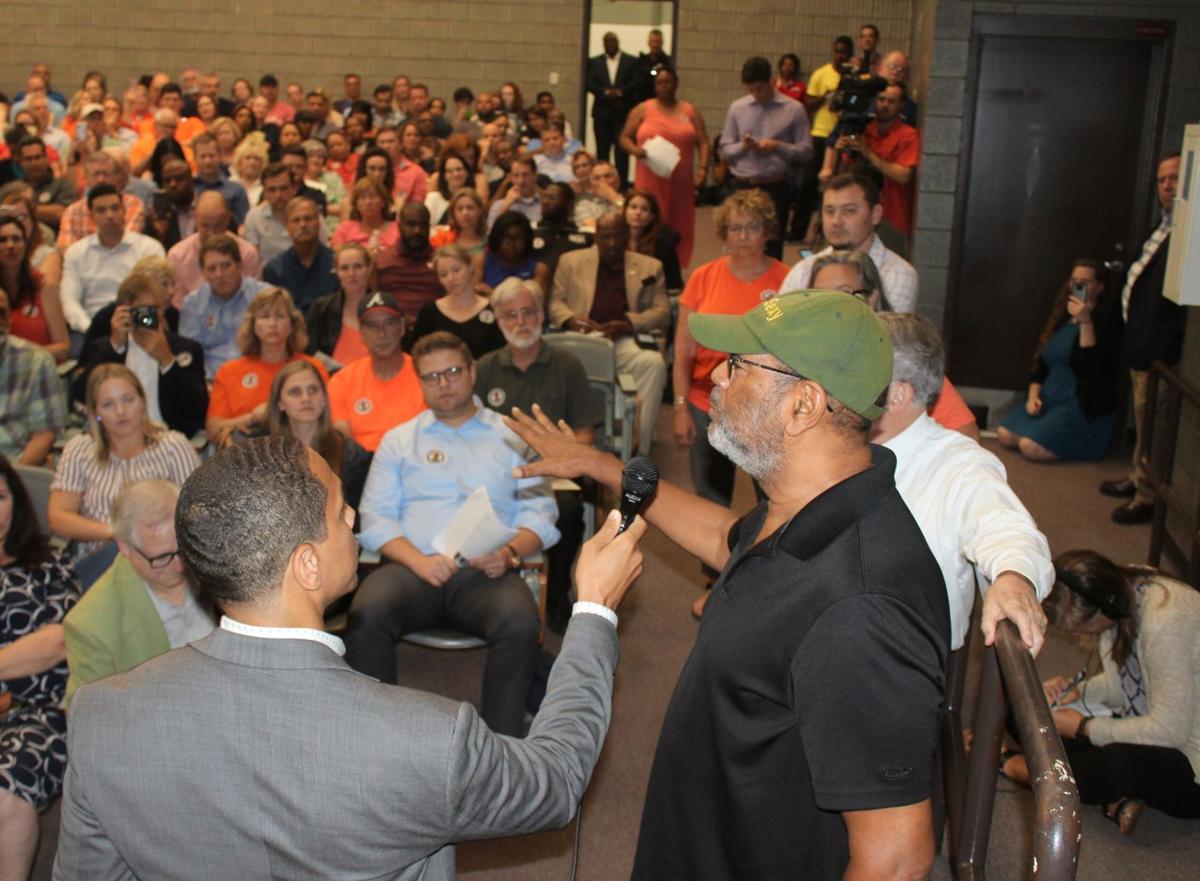 Leonard Robinson of Sustainable Smyrna, a local environmental group, was among the first community members to ask a question during Tuesday’s meeting at Campbell Middle School, asking how a facility such as Sterigenics could be approved by the county as “million-dollar homes” are located a “quarter-mile away” from the plant. Cobb Commissioner Bob Ott later responded that the plant was approved in 1972 prior to the county’s adoption of zoning codes later that year. 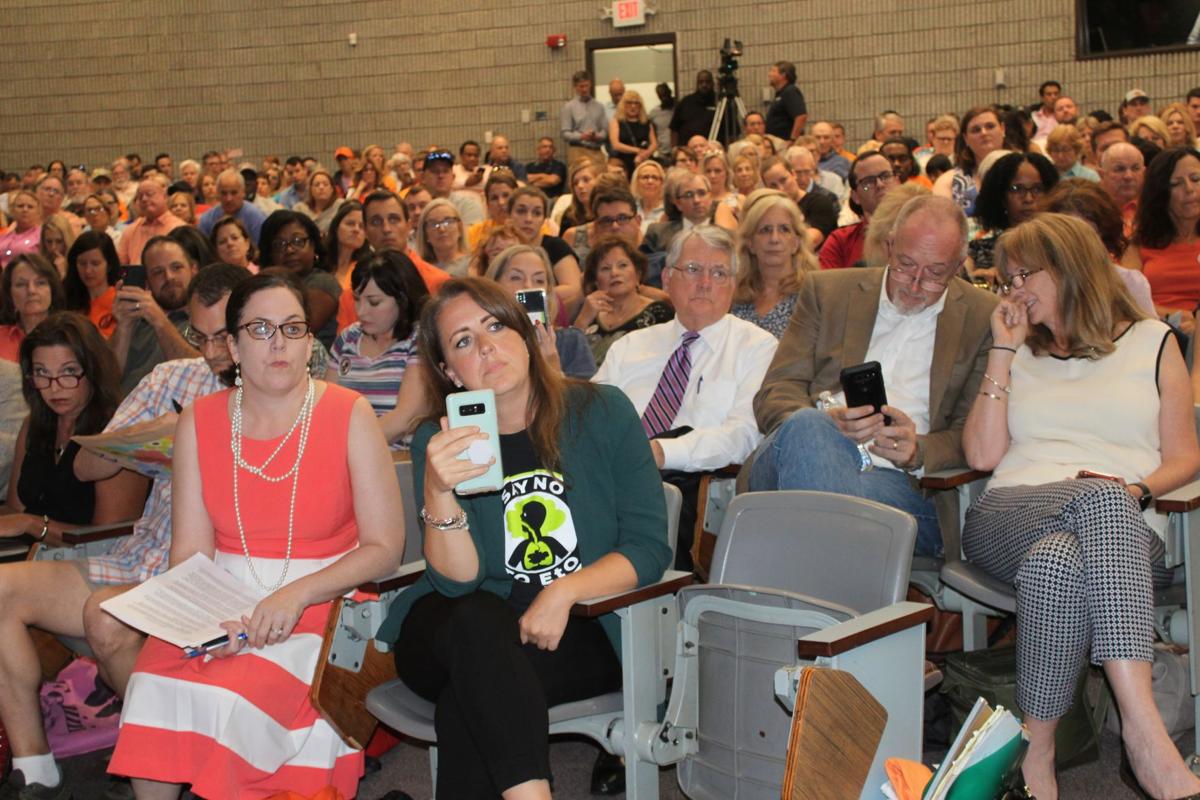 A packed crowd in Campbell Middle School’s theater heard from and questioned local and state leaders along with officials with Sterigenics, which maintains a Smyrna area facility at the center of public concerns of toxic air. 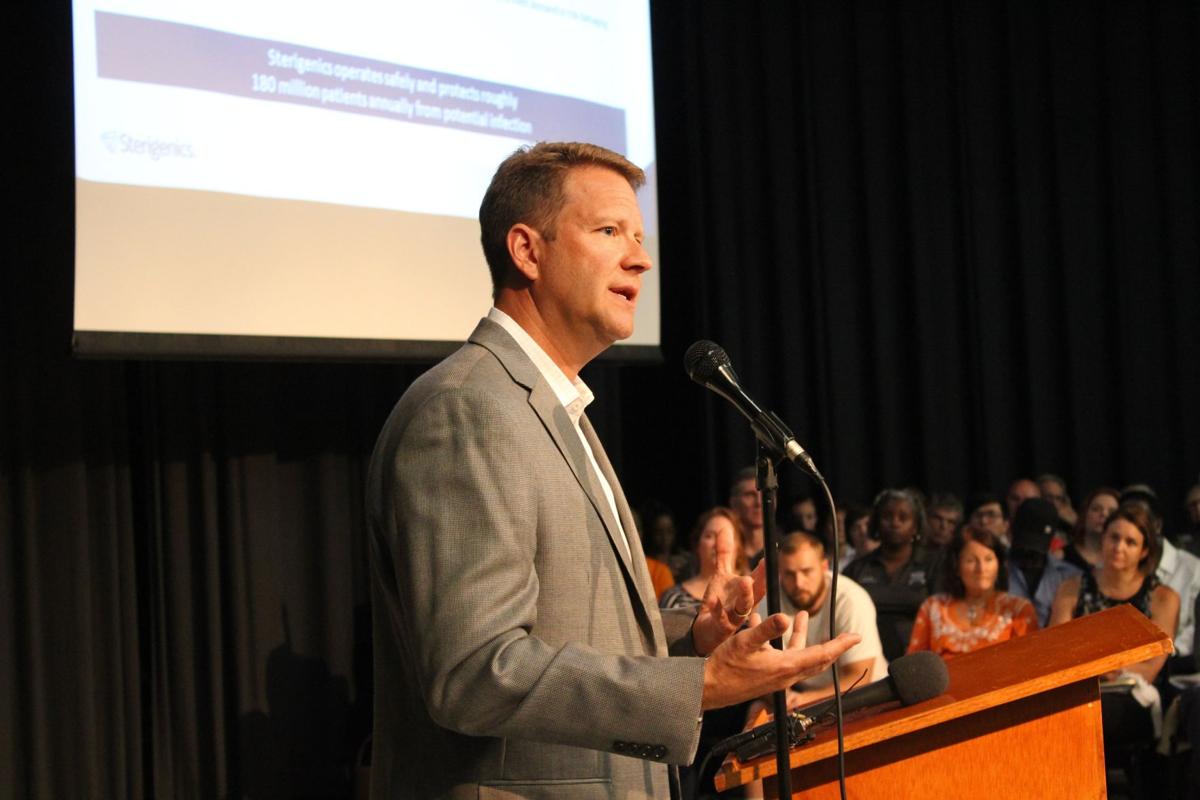 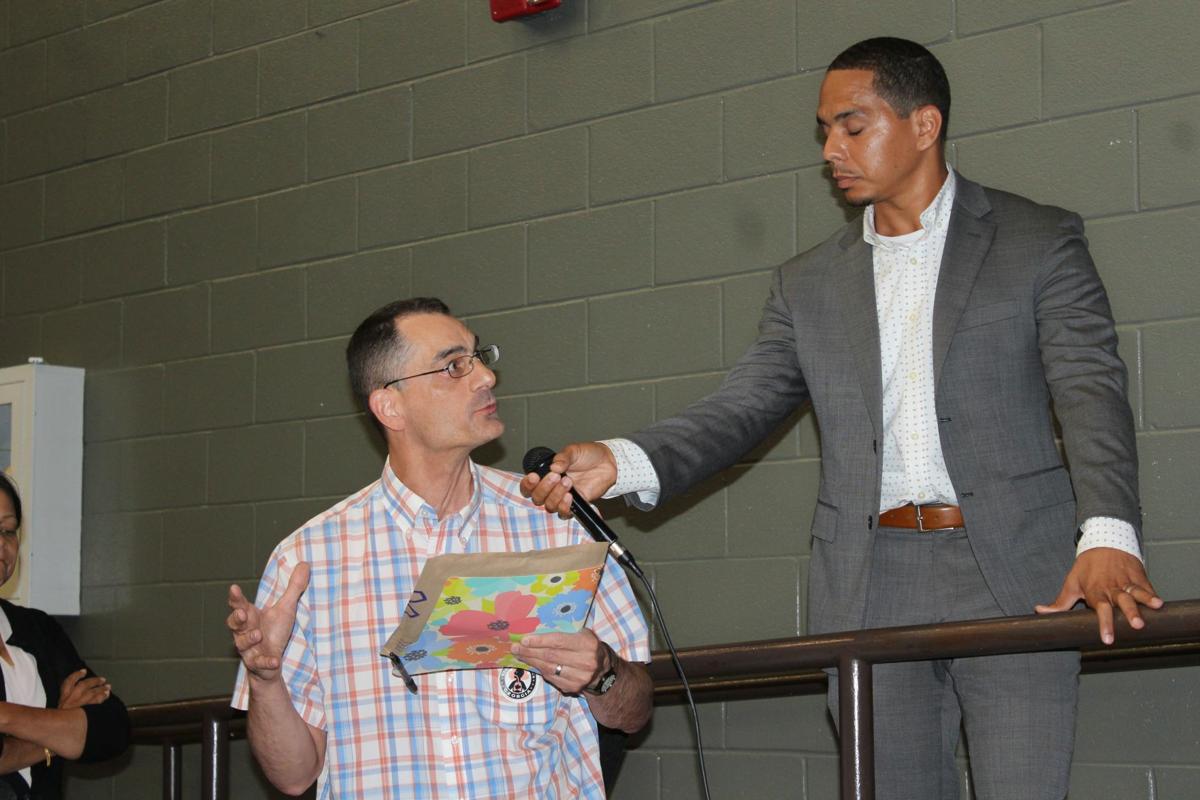 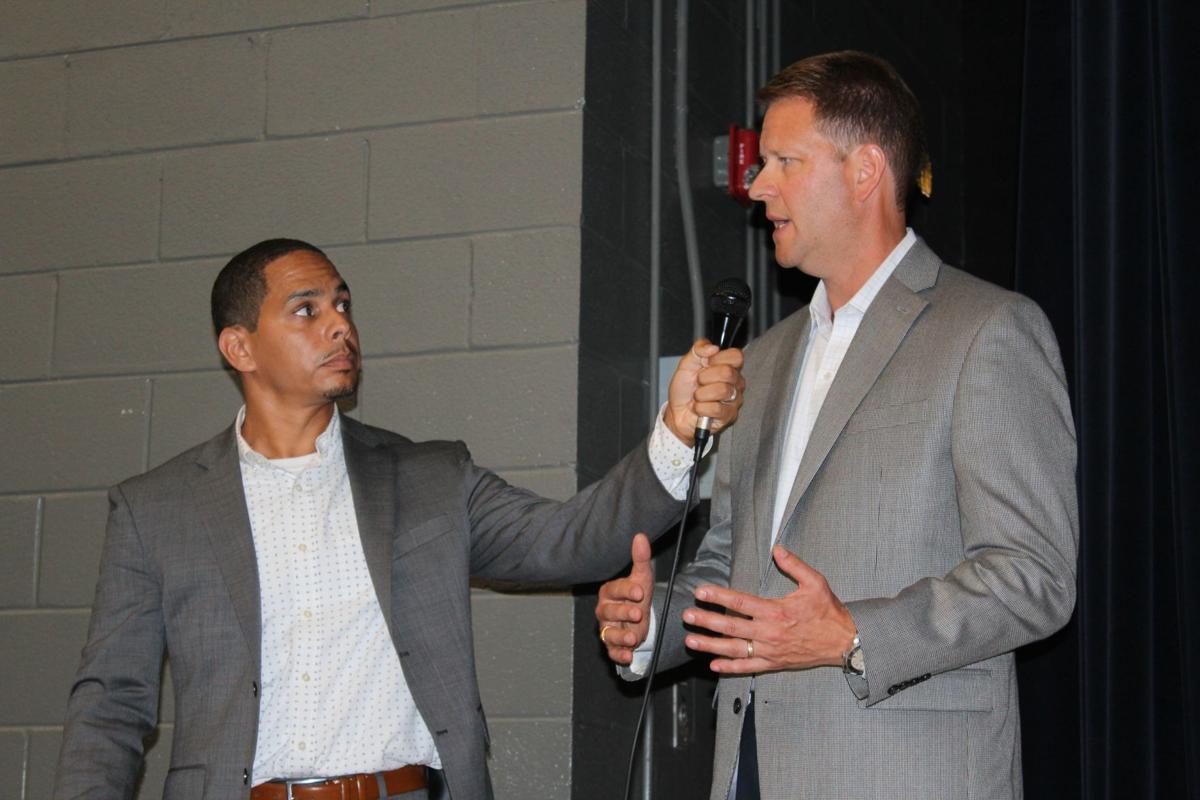 Leonard Robinson of Sustainable Smyrna, a local environmental group, was among the first community members to ask a question during Tuesday’s meeting at Campbell Middle School, asking how a facility such as Sterigenics could be approved by the county as “million-dollar homes” are located a “quarter-mile away” from the plant. Cobb Commissioner Bob Ott later responded that the plant was approved in 1972 prior to the county’s adoption of zoning codes later that year.

A packed crowd in Campbell Middle School’s theater heard from and questioned local and state leaders along with officials with Sterigenics, which maintains a Smyrna area facility at the center of public concerns of toxic air.

SMYRNA — Despite boasting earlier in the evening that his company’s Smyrna-area facility falls well below the federal limit for emissions of a cancer-causing chemical, the president of Sterigenics admitted Tuesday that wasn’t the case less than five years ago.

“If you go by the regulatory standard, 99% of what we handle would be an air permit to emit 4,000 pounds, and we emitted 200 last year,” said Phil Macnabb , speaking to a packed crowd in Campbell Middle School’s theater, in reference to his company’s use of ethylene oxide to sterilize medical equipment. The chemical is also known as EO or EtO.

But Macnabb said there had been “a period in 2015” when additional technologies were put in place to bring the annual ethylene oxide emission output down to about 200 each year from about 3,000 pounds annually — about 15 times greater — with the 3,000-pound annual output spanning back “for a number of years.”

“No wonder we all have cancer,” said someone amid loud grumblings from the crowd. Hundreds were in attendance for a meeting that brought Macnabb and other Sterigenics officials together with Cobb lawmakers, county commissioners and members of the Smyrna City Council to address public concern.

Tuesday’s meeting was the latest public event following news of the plant’s output of a chemical the Environmental Protection Agency classified as a human carcinogen in 2016. Georgia Health News and WebMD broke the story in July about the Sterigenics plant and areas around it where it was estimated that ethylene oxide causes 114 extra cases of cancer for every million people exposed over their lifetimes.

“Why did we just find out a week ago?” asked Leonard Robinson of Sustainable Smyrna, a local environmental group, adding that “million-dollar homes” have been located a “quarter-mile away” from the plant.

“How the heck does this happen when there are laws that say the community has a right to know? I don’t blame the company — I blame the people in (county) planning,” Robinson added.

But Commissioner Bob Ott said the plant’s arrival predated his tenure and many of those currently in the county government.

“How many people were here in 1972? That was when zoning (regulations) started. This plant was under a different name, it was approved in 1972 prior to zoning, and it has been operating in this capacity since 1972,” Ott said.

The timing was later alluded to by Lauren Karseberg, who resides a mile from the Sterigenics plants in Willowbrook, Illinois, around which elevated levels of ethylene oxide were found in the air.

“This industry has had a 40-year head start on us. They knew this day would come,” Karseberg said. “Every single one of you will get messages on Facebook, phone calls from people that you grew up with that moved away … (their) cancer cases will never be accounted for, people who lived here in the ’70s, ’80s and ’90s, and don’t live here anymore, they won’t be counted in your cancer incidences.”

The EPA considers the cancer risk from pollution to be unacceptable when it tops 100 cases for every million people who are exposed to a chemical over the course of their lifetime.

“The Illinois EPA offices also stated that children had higher rates, nine times the rate of pediatric lymphoma and leukemia. What would you say to those families whose children died of cancer?” Vinings resident Bridget Kurt asked Macnabb, saying she lives down the street from the Smyrna plant.

Responded Macnabb: “Cancer is complex and it’s a horrible disease. I can’t answer how people get cancer and why people get cancer — my job is to make sure this needed process that the public requires is operated safely and to the best available control technologies that are out there, and that’s what we’re doing and ... we’re proposing to implement further controls well beyond or well ahead any regulation.”

“But we have studies — the AAC, the acceptable area of concentration, of the Georgia EPD, has declared that Smyrna EtO emissions are dozens of times higher than normally acceptable. … Are these just gunk numbers?” Andrew Kurt asked. “You say you don’t know how people get cancer, and yet the people who study this stuff and the people who study emissions properly, they seem to have some numbers.”

Earlier in the meeting, Macnabb said his company doesn’t “decide” to use ethylene oxide.

“The type of product determines what sterilization method can be used,” Macnabb said, saying the company also utilizes gamma radiation, electron beam radiation and X-ray to sterilize other medical products.

But items such as syringes, Macnabb said, require the use of ethylene oxide.

“A syringe that’s made of plastic has a lot components … surface sterilizations cannot get inside that syringe and sterilize it inside and out to make sure whatever is administered into the patient doesn’t have some contaminant in it that will make them sick, and (ethylene oxide) also does not damage that plastic — radiation can damage the plastic and release a particulate which would be harmful to the patient,” Macnabb said. “The facility here in Atlanta sterilizes over 1 million medical devices per day.”

Macnabb went on to say that while the Environmental Protection Division requires companies to control 99% of their EO output, the Smyrna site controls 99.9% of its emissions of the chemical, with plans underway to installing further emissions-reducing measures pending EPD approval.

“When it’s possible to control more of this substance, we will do that. I know there is a feeling of zero is the only answer, I know that and hear that, but even in what exists out in the air, zero is unattainable. There is ethylene oxide out there already,” Macnabb said, citing one study on Cobb County’s pollution caused by traffic flows.

“The calculation was that diesel trucks add 3,400 pounds of ethylene oxide annually to the environment,” he said.

In his remarks directed at Macnabb, Vinings resident Dustin Caldwell listed the numerous schools and other facilities in the nearby area that could be affected by any output by the facility.

“Lovett, Goddard School, Teasley Elementary, The Apron Academy … as well as a shelter for women and children are all within the danger area of your facility,” Caldwell said.

I wonder if the company, the city, the county and the state (eventually us) face a large liability by letting this plant stay in operation since we now know the dangers created. They should close the plant immediately and relocate the operation to a desolate area.

Let's not forget this plant sounds like a modern medical necessity that also SAVES numerous lives.

My family also lives within a mile from the Willowbrook, IL facility and the hardest think is knowing my children have been breathing this foul air their whole lives and now face a future in fear of cancer and all kinds of adverse health effects. Don't trust a thing the company executives or spokespeople say. They are disingenuous and do not act in good faith. Join us in calling for their complete shut down in any area near families.

Ugh, what do you do. It's catch 22.. It's not like this place is making fake dog poo. It sounds like a necessary part of modern medicine... maybe there's another way to do it.

Mother charged with assault on her 1-year-old son

Fire department encourage residents to 'Give Burns the Boot'

Report: Bicycle stolen outside of Walgreens on Martha Berry Boulevard