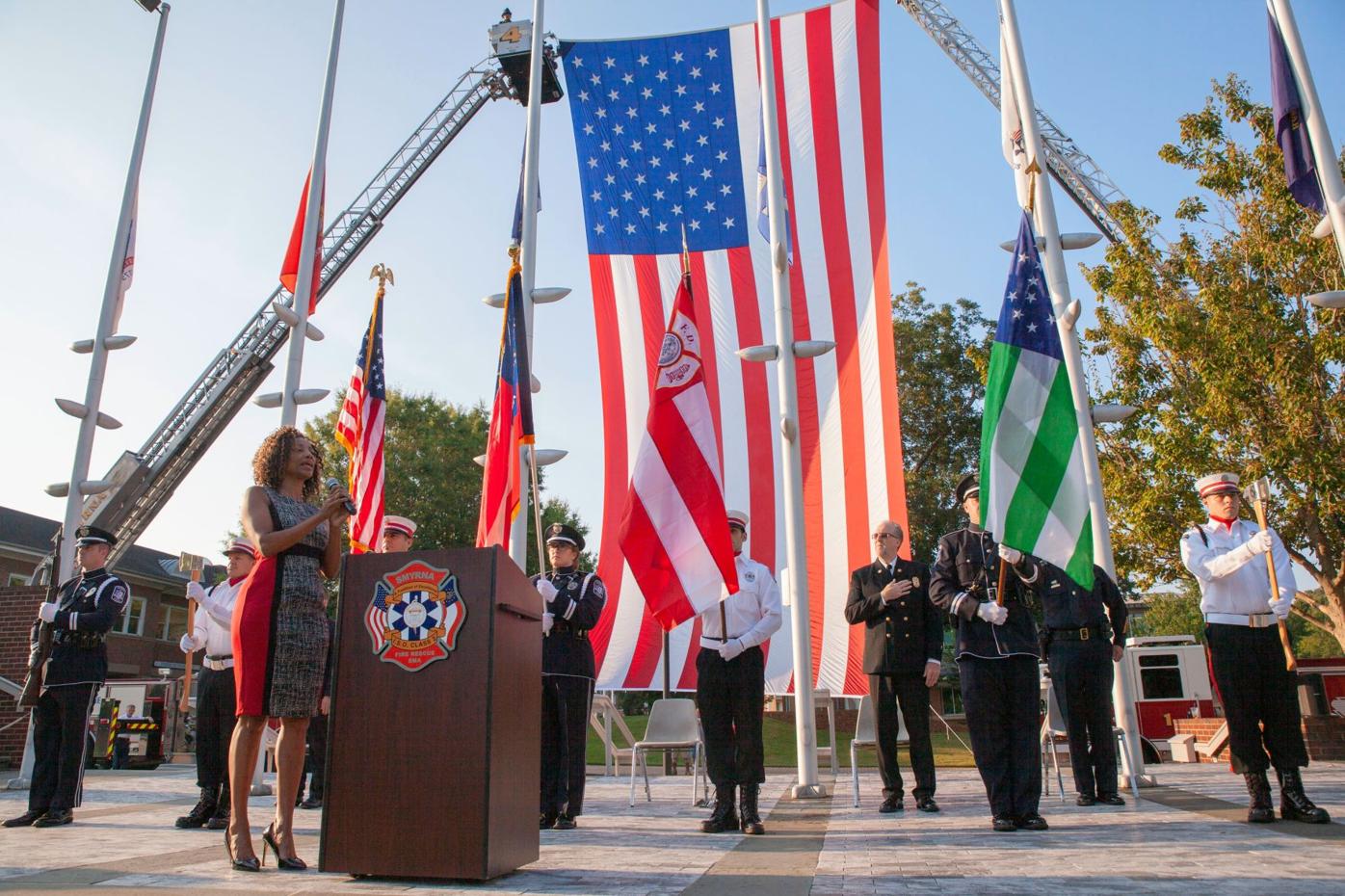 In this file photo, police and fire personnel, as well as city leaders, put on a 9/11 memorial service in Smyrna at the Twentieth Century Veterans Memorial near city hall in 2019. 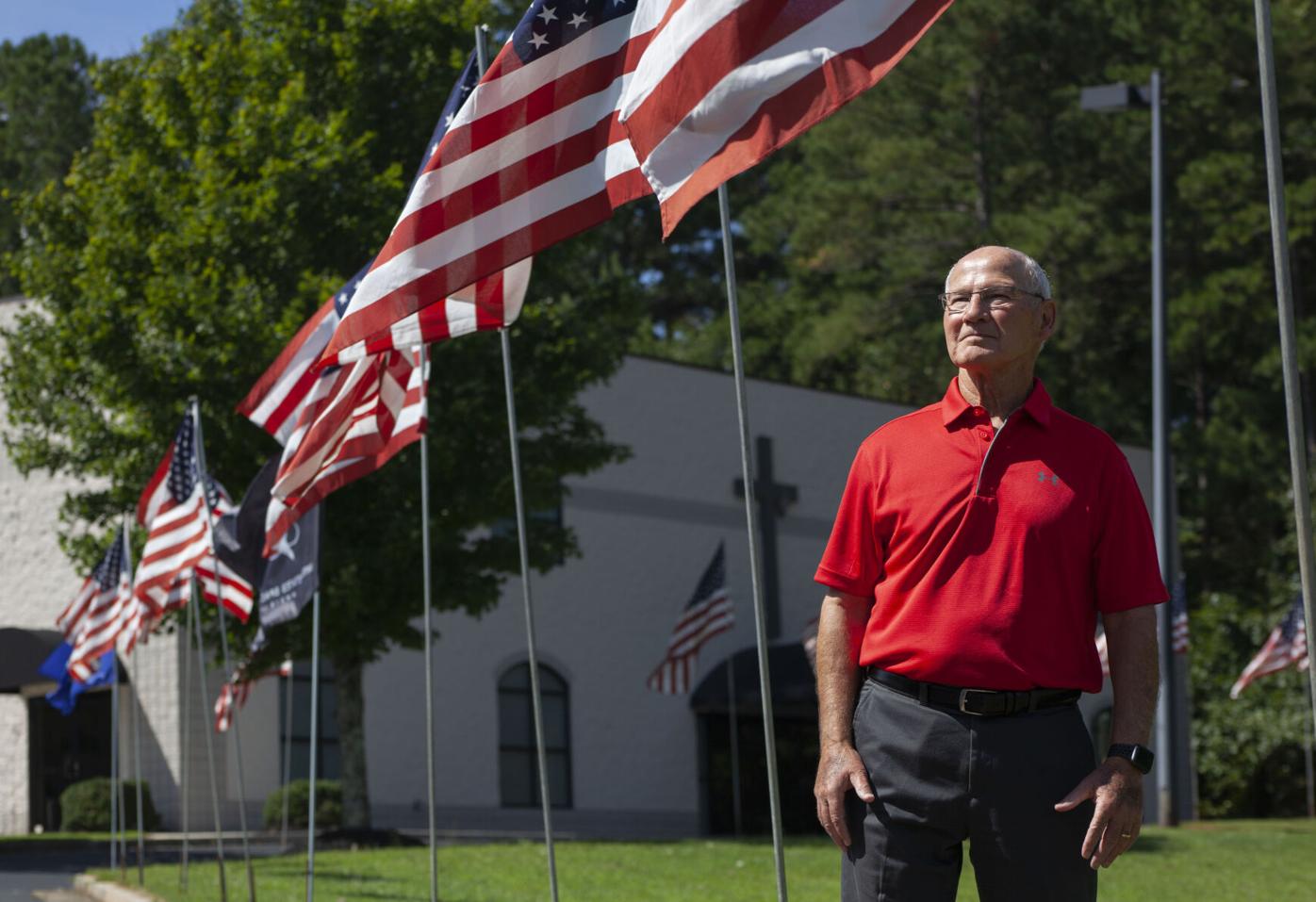 Marietta First Church of the Nazarene Senior Pastor Gerry Carnes stands along the entrance road to the church off Dallas Highway in west Cobb, which the church has lined with 100 American flags, as well as flags for each branch of the U.S. military, in recognition of the upcoming 20th anniversary of the Sept. 11, 2001, terrorist attacks on the U.S.

In this file photo, police and fire personnel, as well as city leaders, put on a 9/11 memorial service in Smyrna at the Twentieth Century Veterans Memorial near city hall in 2019.

Marietta First Church of the Nazarene Senior Pastor Gerry Carnes stands along the entrance road to the church off Dallas Highway in west Cobb, which the church has lined with 100 American flags, as well as flags for each branch of the U.S. military, in recognition of the upcoming 20th anniversary of the Sept. 11, 2001, terrorist attacks on the U.S.

This weekend, Americans everywhere will observe the 20th anniversary of the Sept. 11, 2001, terrorist attacks that felled New York’s Twin Towers, severely damaged part of the Pentagon and killed dozens more when a hijacked plane crashed in a field near Shanksville, Pennsylvania.

Some Cobb County organizations and cities will host remembrances on Saturday, where locals will hear from first responders, eyewitnesses and the names of those killed in the attacks that tragic day.

Organized once every five years by the Kiwanis Club of Marietta, Field of Flags acquires 2,977 flags, one for each person who died in the attacks, and invites people to carry them to Kennesaw Mountain National Battlefield Park (900 Kennesaw Mountain Drive) prior to the anniversary of the day. Once planted, the flags are left, usually for a week or so, a solemn reminder of the lives lost that tragic day.

On Sept. 11 at 7:55 a.m., a service will be held for those killed in the attacks. Former New York Fire Department firefighter James D’Avolio will be the featured speaker.

The event will also feature the Marietta Fire Department Color Guard, Cobb County Police Honor Guard giving a 21-gun salute, a Riderless Horseman presentation by the Cobb County Sheriff’s Department, the playing of “Taps,” and the reading of the names of those killed that day in 2001.

At 10 a.m. Sept. 18, the flags will come down, an event the willing and able are encouraged to assist in.

The ceremony will honor the men and women first responders and others who gave their lives during the attacks of 2001 and will open with the presentation of the colors from the Smyrna Fire and Police Honor Guard.

Speakers will include Smyrna Police Chief Keith Zgonc and Fire Chief Roy Acree and a representative from the City Council.

Following remarks, the city’s police and fire Honor Guard will move a memorial wreath to its posting spot in front of City Hall.

The concert will be held in Morgan Hall at the Bailey Performance Center, 1000 Chastain Road in Kennesaw. It will also be streamed live via KSU Arts Virtual.

Special 9/11 service at Marietta First Church of the Nazarene

Marietta First Church of the Nazarene, at 4341 Dallas Highway in west Cobb will host a special Sept. 11 memorial service at 7 p.m. Saturday, with featured speakers including Bill Cominoes, a retired New York City fire chief, according to Senior Pastor Gerry Carnes. Cominoes and his firefighters were some of the first who responded to the Twin Towers after the Sept. 11, 2001, attacks, Carnes said.

Along with the speakers, there will be music, a flag presentation and a recognition of the 13 U.S. servicemembers killed in Afghanistan in the Aug. 26 bombing at the Kabul airport.

A first responder appreciation and Sept. 11 tribute event at The Aviation History & Technology Center in Marietta will be open to the public from 4 p.m. to 8 p.m. at 555 Perrin Road.

The event invites families to meet local first responders, get up close with their vehicles and “join your community in saying THANK YOU.”

Firetrucks, police cruisers, special vehicles, helicopters, first responder equipment and more will be on display. The event will also include music and food.

The event, to honor Georgia firefighters and raise money for the Terry Farrell Firefighters Fund, includes food trucks, a silent auction, performance of the national anthem by Governors Gun Club owner Bert Brown, remarks from a firefighter who responded to ground zero on 9/11, artifacts from the site and a karaoke competition judged by local community leaders and with a grand prize of $1,000.

Items up for bidding include a 1-year membership to Governors Gun Club; an autographed Atlanta Falcons Matt Ryan jersey; a $250 gift card to Publix; and a $175 gift basket from Henry’s Louisiana Grill in Acworth.

The Terry Farrell Firefighters Fund was established in memory of Terry Farrell, a member of the New York Fire Department and chief of the Dix Hills Volunteer Fire Department. Farrell was one of the hundreds of first responders who died on Sept. 11, 2001 in the World Trade Center attack.

'I was so inspired': Field of Flags 9/11 memorial, one of nation's largest, begins Saturday in Marietta

KENNESAW MOUNTAIN — In 2016, Marietta’s George Warren joined a procession of more than 2,000 people, each of them bearing a flag representing …

NYPD officer, volunteer firefighter reflect on their response to 9/11 at Smyrna memorial

I thought sitting ringside at the Holyfield fight is a way to honor those we lost. It's what our former President chose to do. I'll say a few prayers and go to the Kennesaw event instead.

An Afghan vet remembers: 'I'm toting around half a bullet and a scar for nothing'

‘A complacent majority’: US Supreme Court abortion cases could spark backlash against GOP