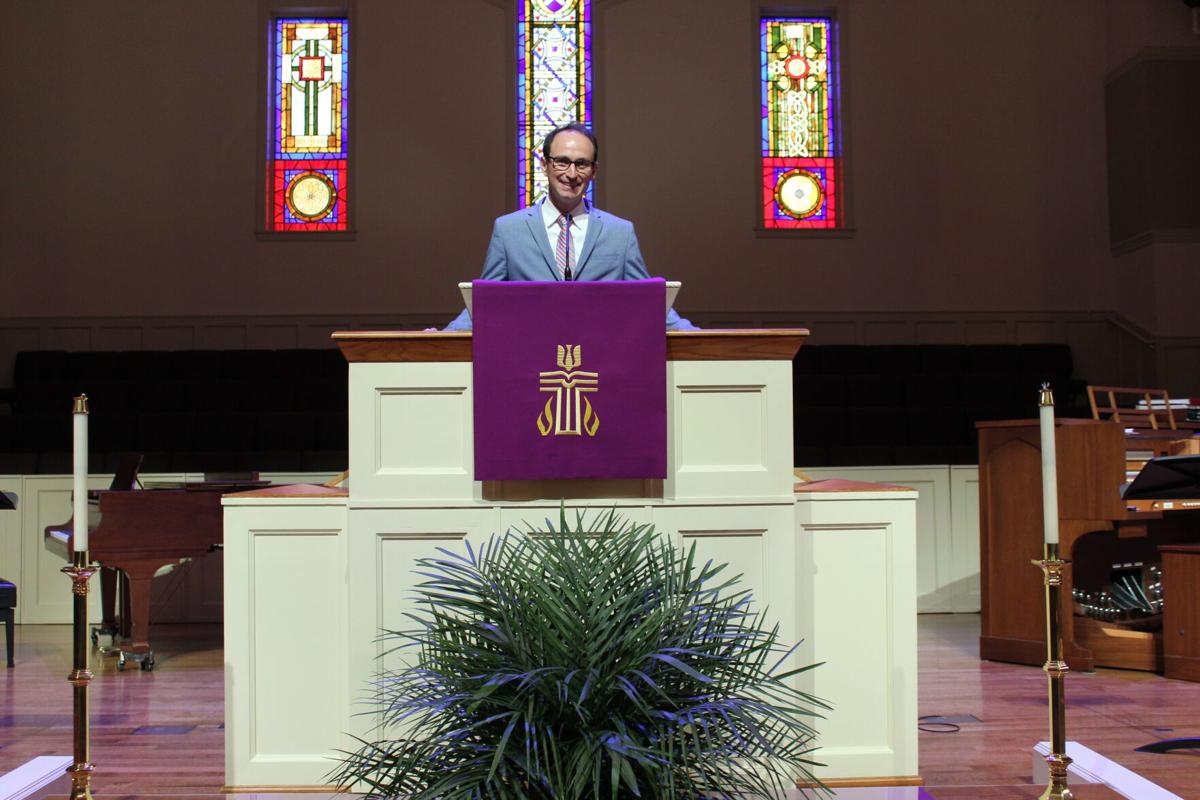 Rev. Joe Evans of First Presbyterian Church of Marietta stands at the pulpit behind palms arranged for Palm Sunday. 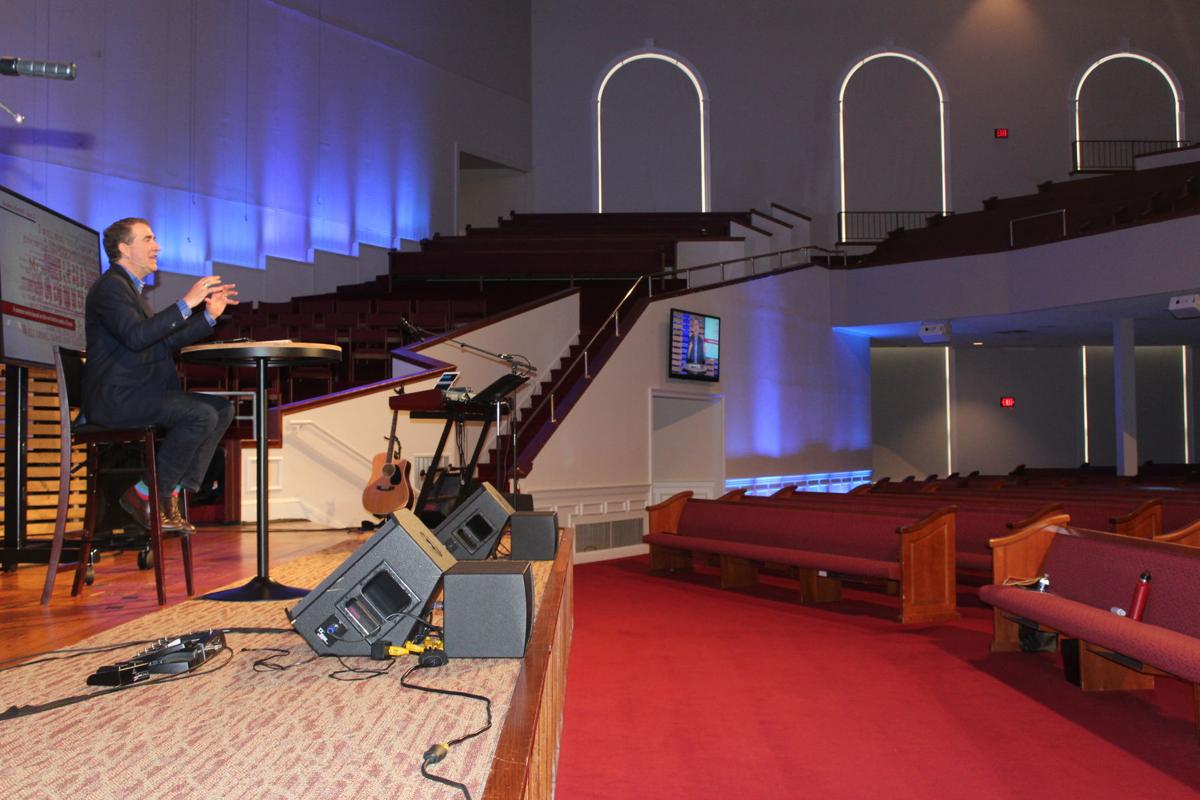 In this file photo from April 5, 2020, Dr. Michael Lewis, lead pastor at Roswell Street Baptist Church in Marietta, conducts an unusually empty Palm Sunday service, when just a dozen church leaders were inside the worship center streaming a virtual service for thousands of congregants to watch live or on demand online from their homes during the pandemic. 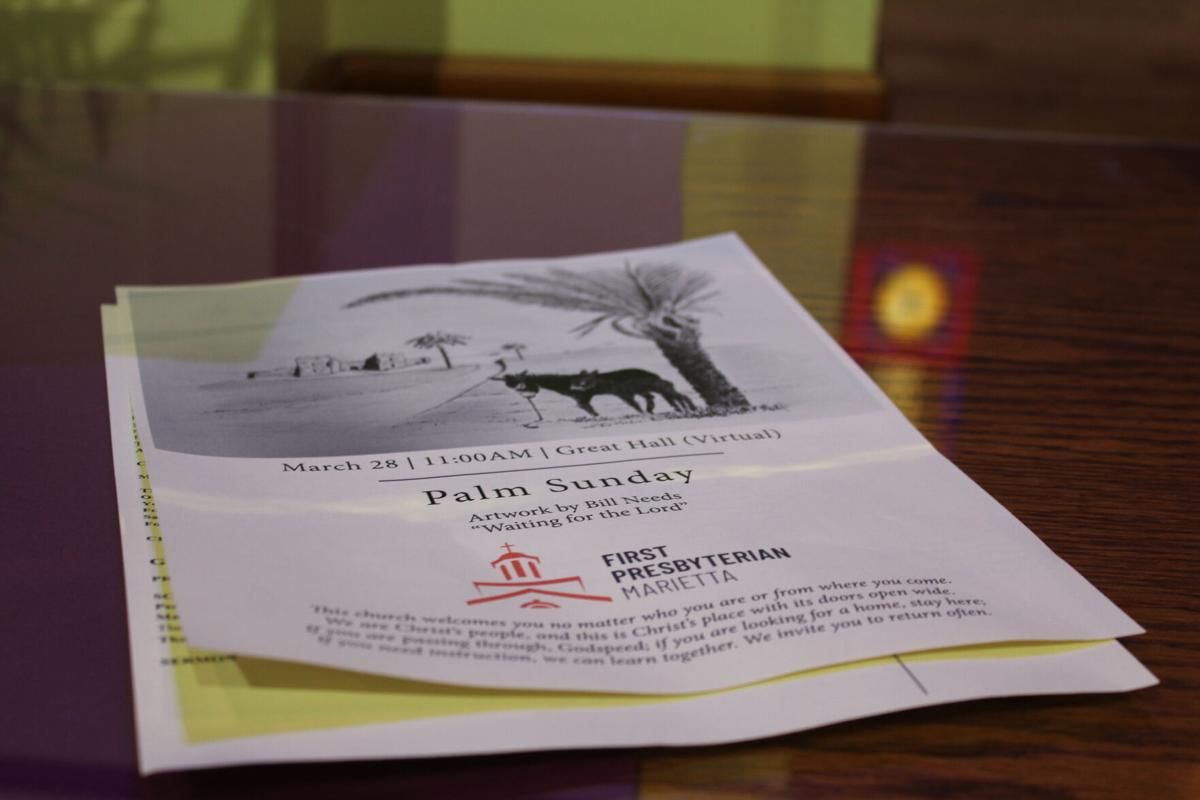 A program for the Palm Sunday service at First Presbyterian Church of Marietta. 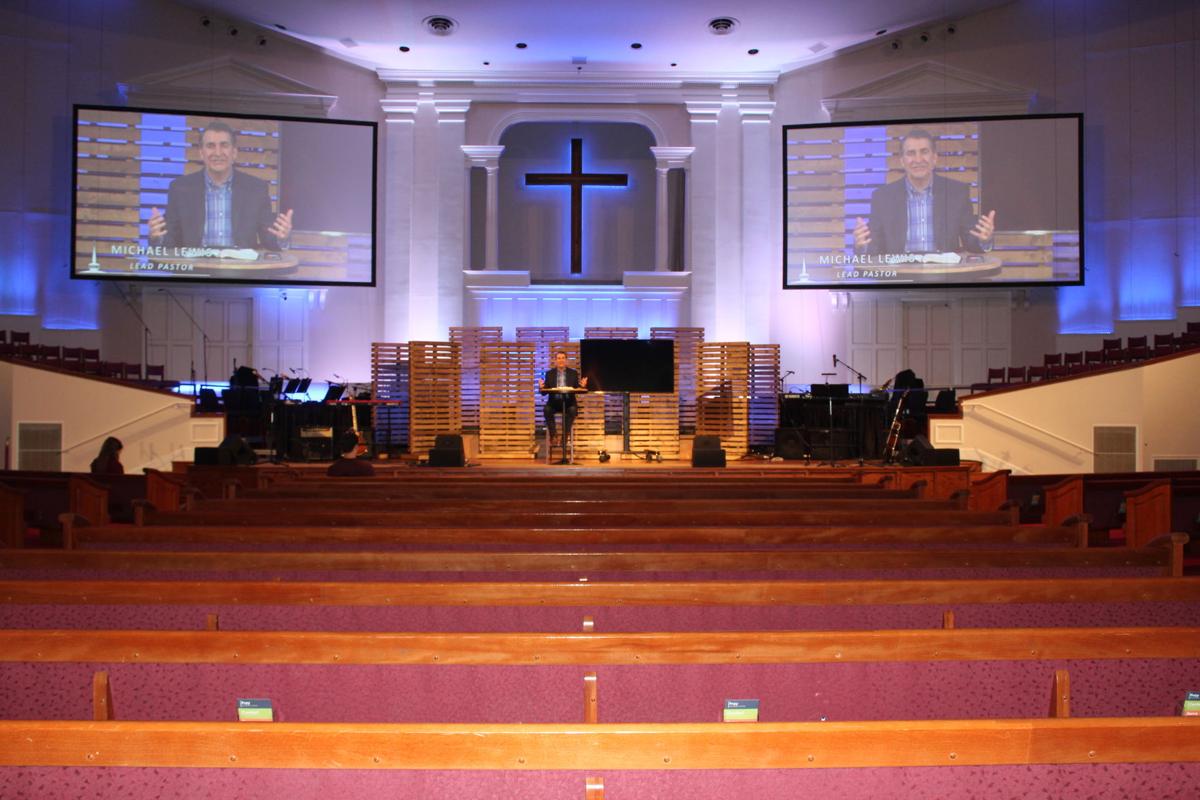 In this file photo from April 5, 2020, Dr. Michael Lewis, lead pastor at Roswell Street Baptist Church in Marietta, gives the Palm Sunday sermon to a near-empty worship hall during a live service recording. 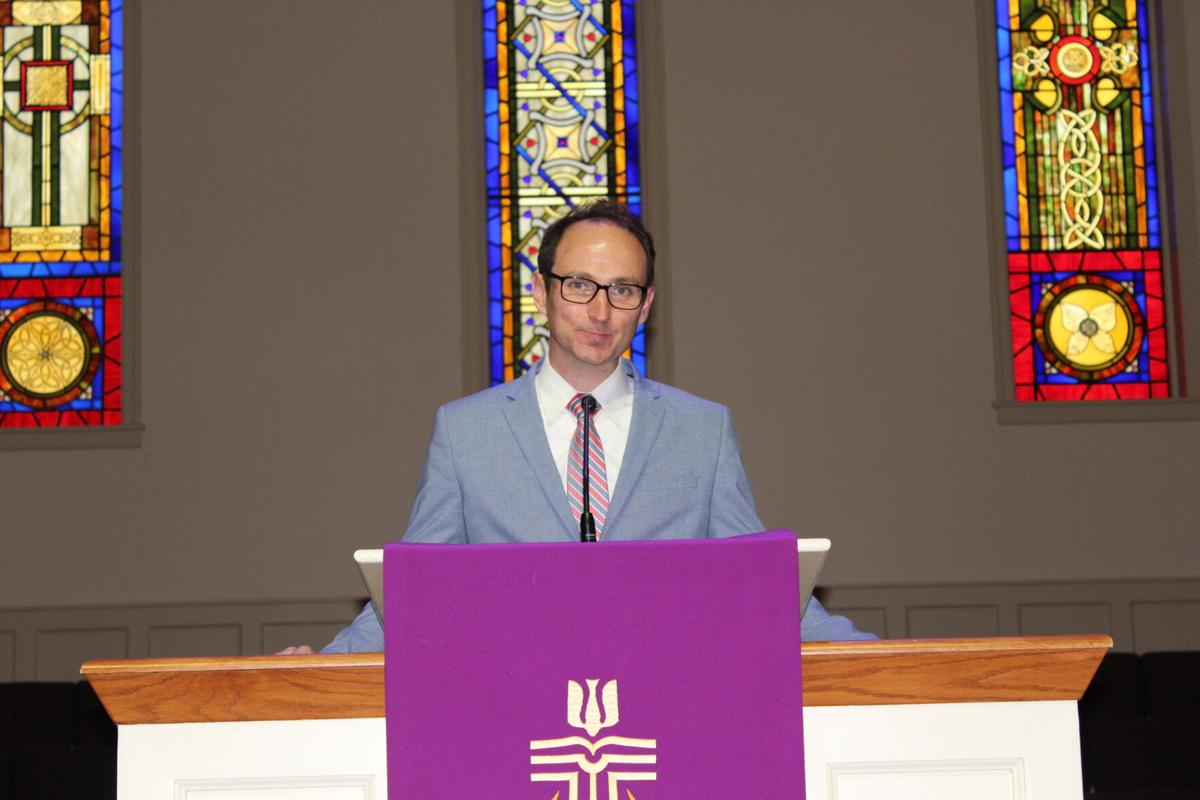 Senior Pastor Joe Evans of First Presbyterian Church of Marietta stands at the pulpit behind palms arranged for Palm Sunday. 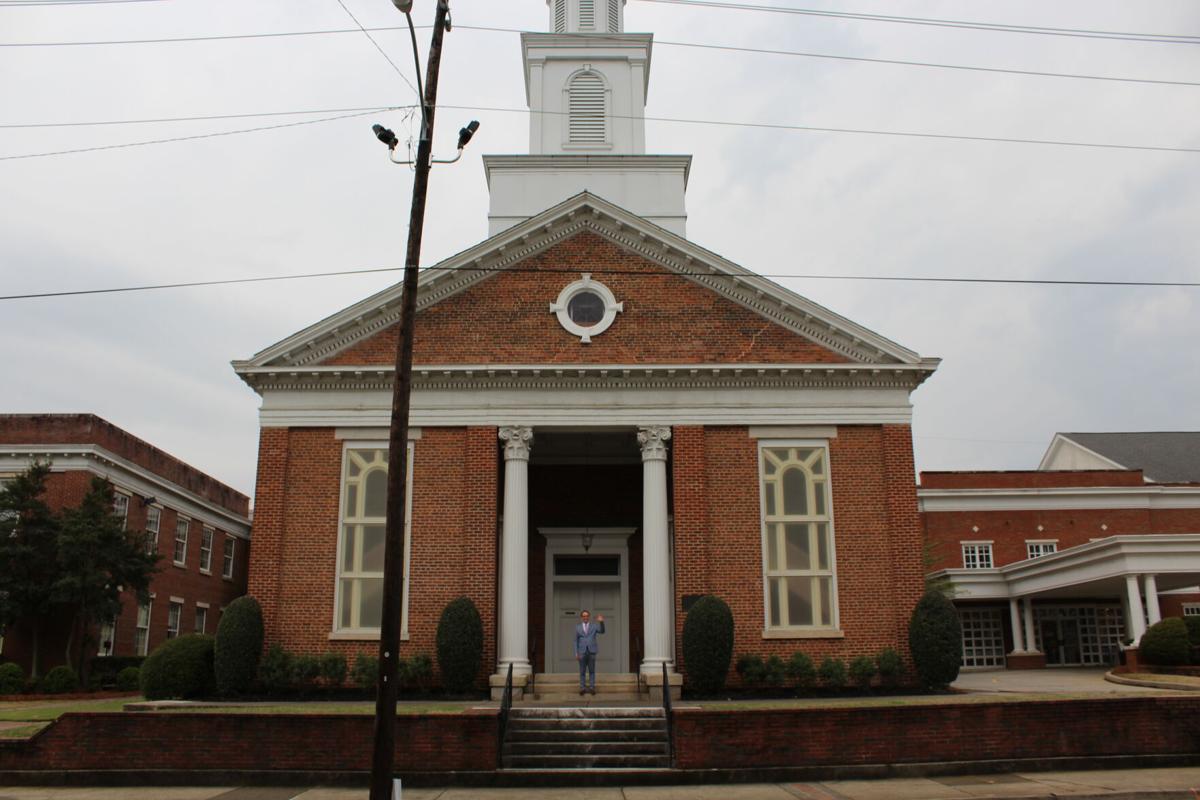 Rev. Joe Evans of First Presbyterian Church of Marietta stands at the pulpit behind palms arranged for Palm Sunday.

In this file photo from April 5, 2020, Dr. Michael Lewis, lead pastor at Roswell Street Baptist Church in Marietta, conducts an unusually empty Palm Sunday service, when just a dozen church leaders were inside the worship center streaming a virtual service for thousands of congregants to watch live or on demand online from their homes during the pandemic.

A program for the Palm Sunday service at First Presbyterian Church of Marietta.

In this file photo from April 5, 2020, Dr. Michael Lewis, lead pastor at Roswell Street Baptist Church in Marietta, gives the Palm Sunday sermon to a near-empty worship hall during a live service recording.

Senior Pastor Joe Evans of First Presbyterian Church of Marietta stands at the pulpit behind palms arranged for Palm Sunday.

MARIETTA — Every week, before Sunday rolls around, Rev. Joe Evans and his team at First Presbyterian Church of Marietta conduct and record a full service with no audience. First Presbyterian has started holding small, socially distanced, in-person services, but in-person singing is not allowed. So, from their homes, members of the choir sing hymns individually, recording themselves before a “technology wizard … splices it together,” Evans said. It’s one of the many innovations local churches have come up with, necessitated by the pandemic.

This weekend, congregations across the world are preparing to celebrate Palm Sunday for the second time since the pandemic began.

“It’s all sad in a way, ‘cause what everybody really wants is little kids waving palms and walking around, but we’re not there yet,” Evans said. “We’re kind of on our way to having stuff like that again.”

At First Presbyterian, the first in-person services held this year had crowds of about 35, Evans said. More recently, as more people have been vaccinated, that number has grown to about 90. The hope is that by Easter, they will have 200 for each of the two services.

“People ask me, “Is the church open? Are people coming into worship in the building again?’ And I’ll say ‘No, I’m still mostly a televangelist,’” Evans joked. “And the stewardship council will say, ‘Well if you’re a televangelist, you should be raising more money than you are.’”

First Presbyterian has gone fully digital, creating an app and starting a podcast. Through word-of-mouth, members have recommended the church’s online services to friends and family around the world. Ironically, more people than ever are viewing the church’s services — 2,500 on a typical Sunday. Evans said he’s had viewers from Australia, Germany and West Africa tune in. In one case, a Marietta woman views the service at the same time as her mother in Ohio, with the two connected on FaceTime as they watch.

“It’s so funny. But it’s also awesome. … They can go to church together, even though they’re miles and miles apart,” Evans said. “Now you can go to the church you grew up in — just pull it up on your computer.”

Michael Lewis, lead pastor at Roswell Street Baptist Church, said Roswell Street expects to use about 50% of their capacity this Sunday, with hopes that Easter will see 80%. He recalls this time last year, planning for Easter. At the time, he hadn’t yet realized how long the pandemic would last and thought things might be back to normal by Easter 2020. This time, the end really could be in sight.

“The last three to four weeks, we’ve had more and more people coming back, because they’ve got their shots,” Lewis said.

That coming back, the light at the end of the pandemic tunnel, has given Lewis inspiration for his sermons.

It all revolves around hope. The theme of this Palm Sunday is “Hope comes riding in.” For Good Friday, it will be “When all hope is lost,” and for Easter, “Hope is alive.”

“(We’re) really talking about how hope was experienced in the first century, when Jesus entered into Jerusalem,” Lewis said. “And then how we can have hope living in the 21st century, as we express our hearts to the Lord, and find hope in him … Hope is riding, we’re looking forward to getting on the other side of this pandemic.”

At Roswell Street, Lewis said they’ve been fortunate to have such a large building (when it comes to distancing) and such high ceilings (for ventilation).

“Members have done a great job of masking,” Lewis said. The choir is distanced, with only a third of its singers attending, he added.

Every other pew has been marked off, signs advise people of different households to keep their distance, and there haven’t been any outbreaks linked to the church, Lewis said.

There have been happy, if strange occasions such as distanced weddings, but also too many funerals, including two last week alone. Lewis hasn’t been able to embrace people mourning their loved ones.

Apart from services, Lewis said he, his staff and congregants have stayed busy with their food pantry, their women’s resource center, financial planning classes and other church programs.

“I am so filled with hope. There’s just something magnetic about being together, seeing each other, and that has been really phenomenal,” Lewis said.

For Evans’ part, he said the pandemic has made him and his congregation value those things they had taken for granted: going to church, singing with each other, shaking hands and embracing.

Those who have attended in-person at First Presbyterian have had to make reservations, wear masks and be escorted to their seat by a deacon.

“We had to fight for our faith a little bit,” Evans said. “If you were going to show up in church, you had to go and jump through some hoops … and what’s amazed me is watching this congregation inconvenience themselves to get to church.”

Evans has been sobered by the recent mass shootings in metro Atlanta, in which the shooter, raised in the church, claimed to be eliminating temptation. He’s been reflecting on that for his sermon.

“I want to denounce that form of Christianity, and say, ‘That’s not the Jesus I know,’” Evans said. “If we claim to follow Jesus, we have to be like him. And he was love — love the world, even if it costs you your own life.”

Biden wants to sell Louisiana a new bridge — and much more