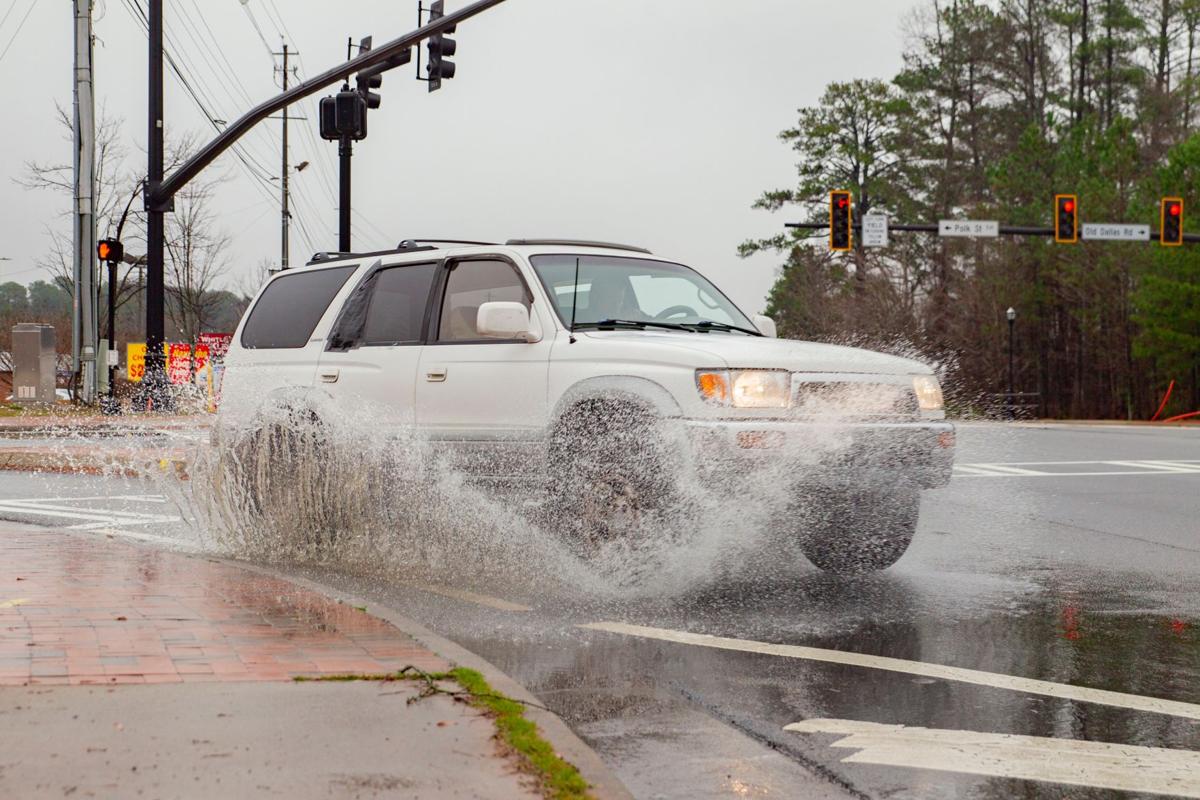 A motorist splashes through a puddle at the intersection of Whitlock Avenue and Polk Street in Marietta earlier this month. 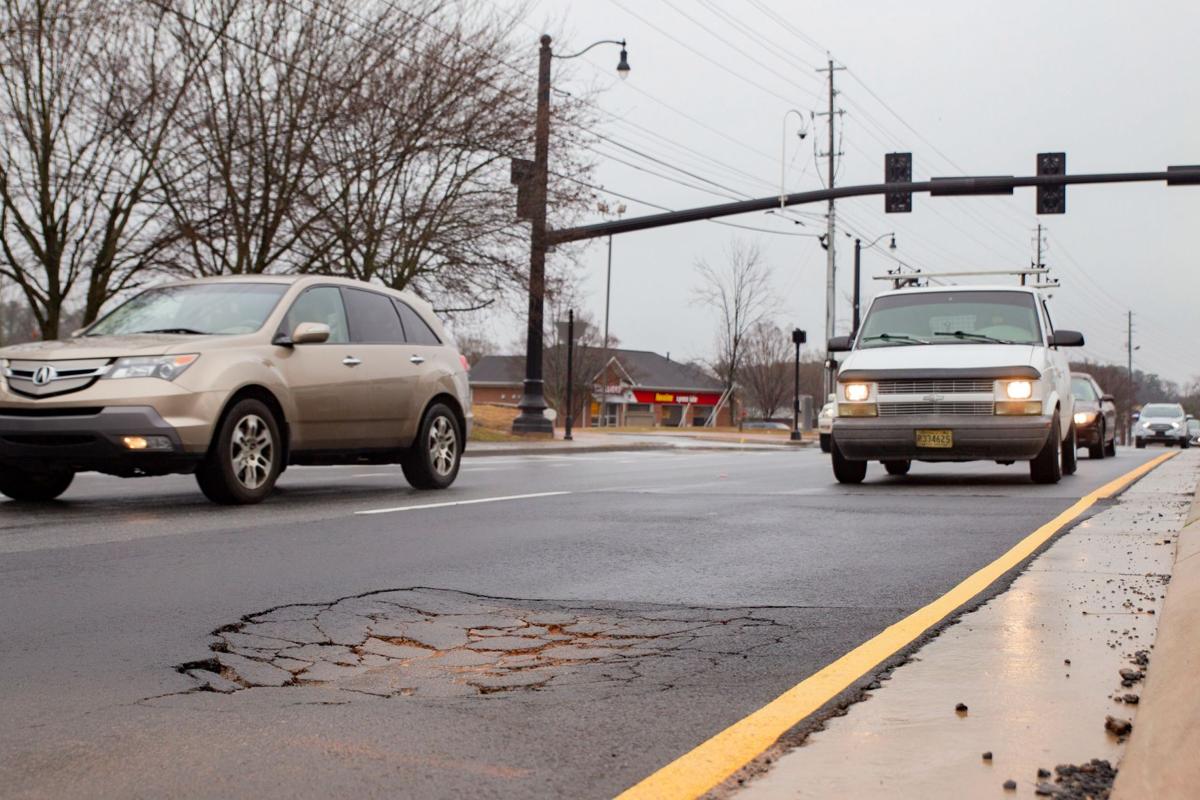 Motorists avoided a pothole on Whitlock Avenue near Marietta High School on Friday morning. City officials said they hoped to have a temporary fix in place by the afternoon. 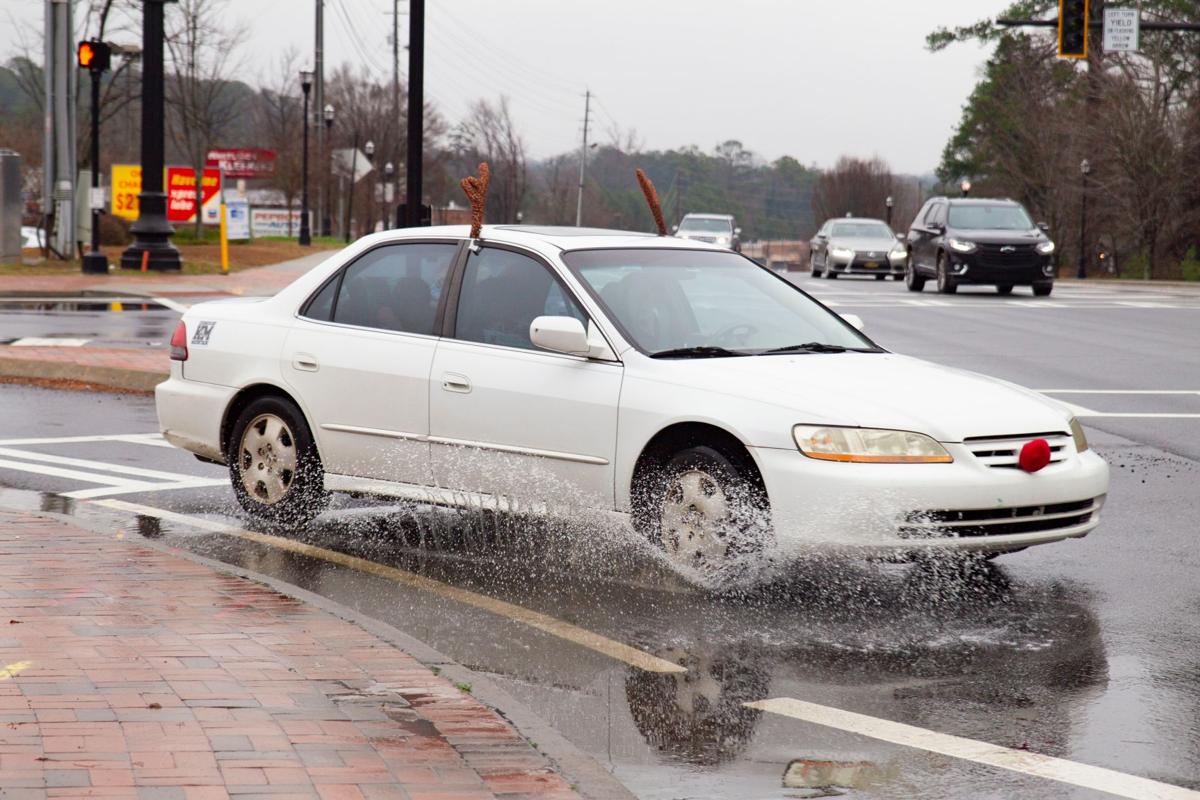 A motorist splashes through a puddle at the intersection of Whitlock Avenue and Polk Street in Marietta on Friday. 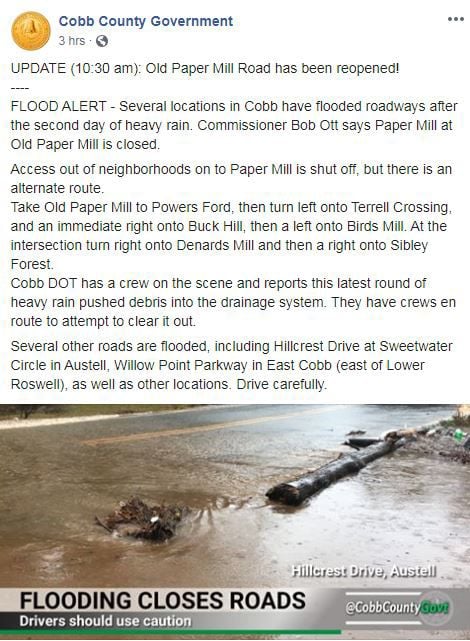 A motorist splashes through a puddle at the intersection of Whitlock Avenue and Polk Street in Marietta earlier this month.

Motorists avoided a pothole on Whitlock Avenue near Marietta High School on Friday morning. City officials said they hoped to have a temporary fix in place by the afternoon.

A motorist splashes through a puddle at the intersection of Whitlock Avenue and Polk Street in Marietta on Friday.

MARIETTA — After the skies opened up, dumping nearly two inches of rain on the Cobb County area in a 24-hour period and causing localized flooding and a few road closures, forecasters say drier days lie ahead.

Most of the heavy rain has moved away from metro Atlanta toward the eastern and central portions of the Peach State, and by midday Saturday, Cobb and its neighbors should begin to see the sun again, according to Steven Nelson, a meteorologist with the Peachtree City branch of the National Weather Service.

Nelson said any additional rain over the weekend will likely amount to about a quarter of an inch.

Much of the localized flooding reported in the Cobb County and metro Atlanta area has been a result of improper drainage, Nelson said.

“Basically, it’s leaves or even sediment from construction that could have filled up drains,” he said. “A lot of times in the winter months, they can clog up if there hasn’t been any maintenance done.”

Cobb County reported several roads had been on and off Thursday and Friday due to heavy rain, but most had reopened by mid-morning on Friday. Only one road in Austell, Hillcrest Drive at Sweetwater Circle, less than a mile north of Six Flags Over Georgia, remained closed late Friday morning, according to Ross Cavitt, a spokesman for the county.

The county posted photos of the flooded road on its Facebook page Friday morning. Cavitt said the road had reopened by early afternoon.

According to Cavitt, other areas where flooding had been reported on Thursday and Friday included:

♦ The 700 block of Tarpley Road, north of Burnt Hickory Road and west of Barrett Parkway;

♦ The 1300 block of Joyner Avenue in Fair Oaks, between Fair Oaks Elementary School and Atlanta Road; and

Echoing Nelson, Cavitt said the reported issues have largely been a result of clogged storm drains. Department of Transportation crews responded to those reports as they came up.

The county reported the road reopened by 10:30 a.m. on Friday.

So far, Cavitt said little to no damage has been reported due to flooding. But, he cautioned motorists not to take risks should they encounter flooded roads in their cars.

In Marietta, Officer Chuck McPhilamy, a police department spokesman, said Friday afternoon he was not aware of any road closures, downed trees or damage reported.

Some motorists reported on social media a pothole had opened in the westbound lanes of Whitlock Avenue near Marietta High School. The MDJ observed motorists swerving to avoid the pothole just west of the intersection of Whitlock Avenue and Polk Street on Friday morning.

Marietta City Manager Bill Bruton said Whitlock Avenue is a Georgia DOT road, and the state is responsible for its repair and maintenance. But, he said, the city is aware of the recurring issues it has caused and expected to have a temporary fix finished by Friday afternoon.

“The pothole near Marietta High was a problem a couple of months ago and GDOT made a repair after we reported it to them,” Bruton said. “When the repair failed this week, we again contacted GDOT to request an immediate fix. Since they have not been able to do anything yet, we are going to make a temporary repair of this pothole and another one on Whitlock closer to the Square ourselves to assist the many people who use this important road.”

Bruton added that as of Friday afternoon, standing water could be found on individual properties, but no roads had been closed. Crews will monitor the situation and prepare for any changes through the weekend, he said.

Like Cavitt, McPhilamy warned drivers to use caution. He said motorists may not see the flooded areas of the road before entering them.

“Remember that not all vehicles are created like your own, some may require more time to stop or navigate on wet roads, please be patient,” he said. “Use extra caution when driving in low-laying areas (valleys, even when slight) as these will be the areas most likely to have standing water.”