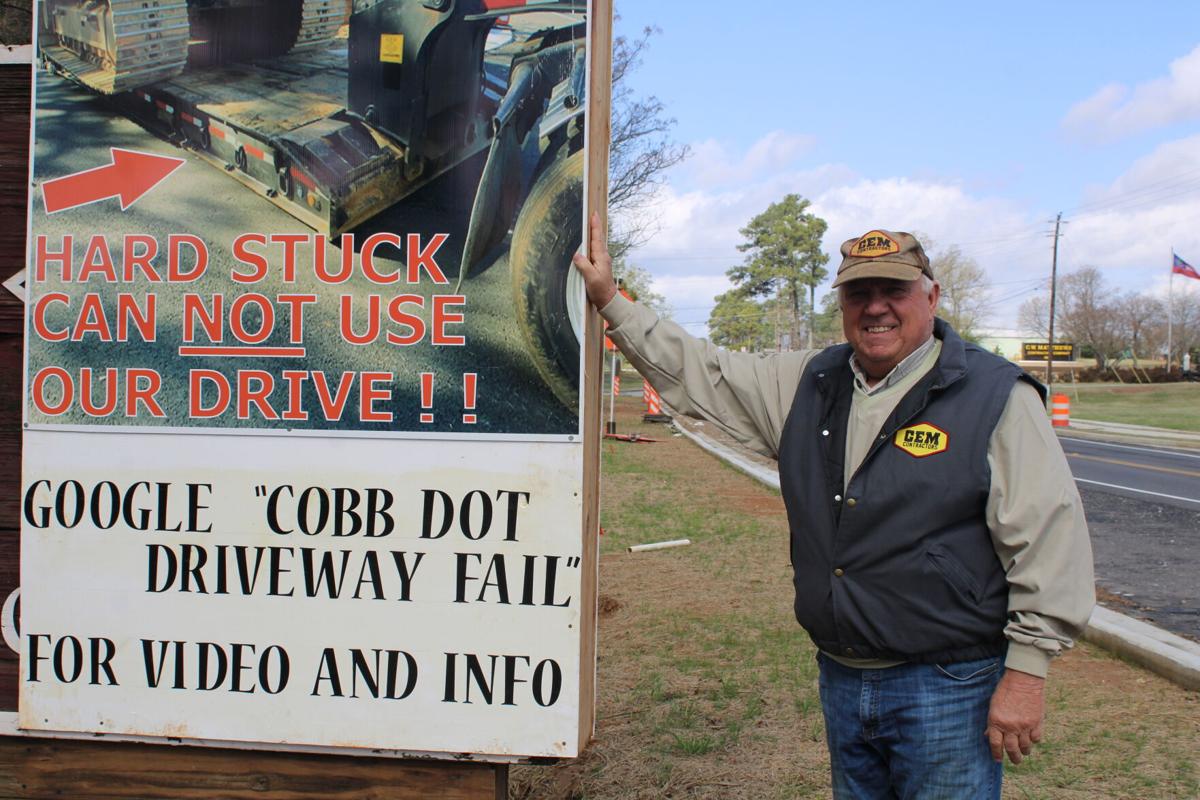 Wayne Marcinko, owner of Marietta-based GEM Contracting, poses next to a sign he erected outside his business on Old 41 Highway. Marcinko says the Cobb Department of Transportation rendered his company’s driveway unusable when they rebuilt it last summer. 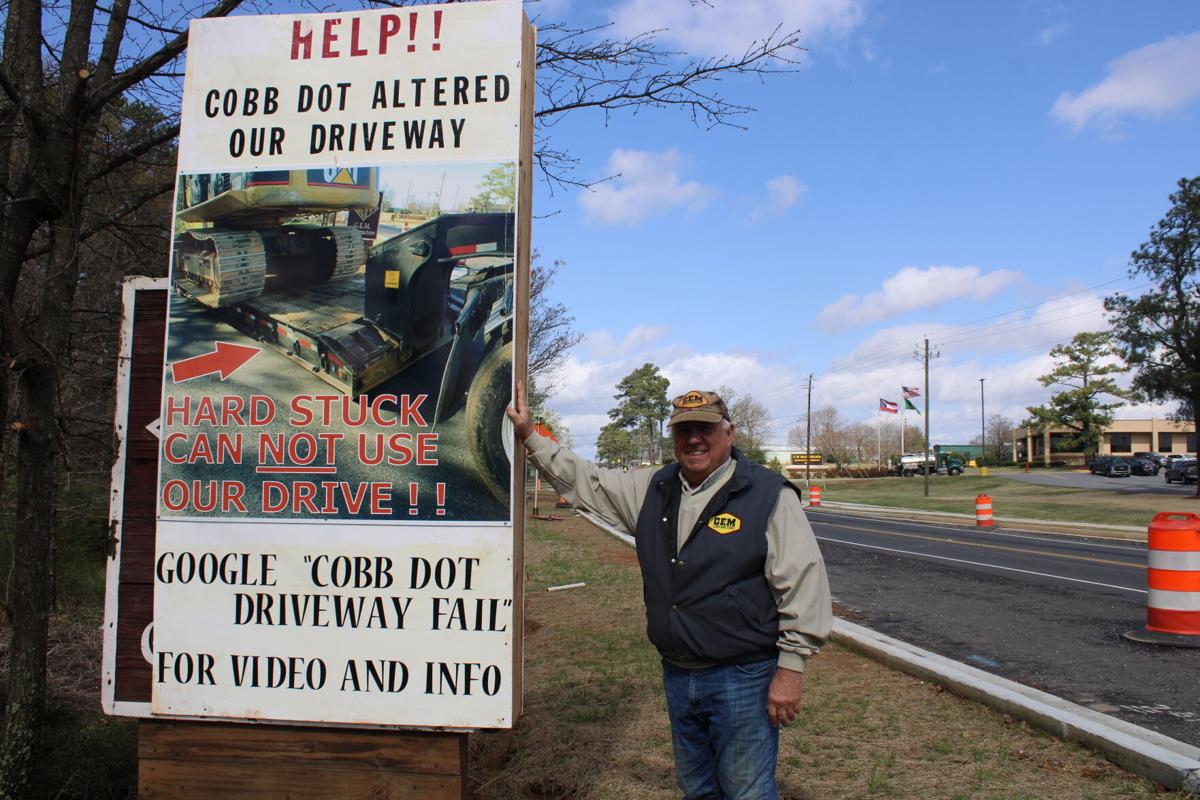 Wayne Marcinko, owner of Marietta-based GEM Contracting, displays a sign he erected outside his business on Old 41 Highway. Marcinko says the Cobb Department of Transportation rendered his company’s driveway unusable when they rebuilt it last summer.

Wayne Marcinko, owner of Marietta-based GEM Contracting, poses next to a sign he erected outside his business on Old 41 Highway. Marcinko says the Cobb Department of Transportation rendered his company’s driveway unusable when they rebuilt it last summer.

Wayne Marcinko, owner of Marietta-based GEM Contracting, displays a sign he erected outside his business on Old 41 Highway. Marcinko says the Cobb Department of Transportation rendered his company’s driveway unusable when they rebuilt it last summer.

Wayne Marcinko says it didn’t have to be like this.

“I’ve lived here my whole life,” he told the MDJ, standing outside Marietta-based GEM Contracting. “I don’t want to sue my own county.”

And he has no intention to. But Marcinko is fed up with Cobb County and its transportation department, which rebuilt GEM’s driveway last year as part of a construction project on Old 41 Highway. Their “improvement” (Marcinko said, miming with air quotes) has rendered it all but unusable for his commercial construction business.

In brief, the problem arises when Marcinko, or one of his employees, tries to drive up the driveway with one of the lowboy trailers GEM uses to transport heavy equipment. Because of the new angle of the driveway, the 80-foot rig grinds to a halt, scraping on the pavement.

Since the “improvement,” Marcinko has waged a quixotic struggle with the county to have the driveway re-rebuilt. He’s traded, by his estimate, upwards of 4,000 emails with DOT and the county attorney’s office. He’s posted Youtube videos of the driveway, and spoken at Board of Commissioners meetings. He’s gone so far as to erect a sign on the road which reads, “HELP!” and advises passerby to “Google Cobb DOT Driveway Fail.”

The trouble started a little over a year ago, Marcinko recalled, when DOT first approached him. They were working on a 2016 SPLOST project, the rebuilding of the Old 41 Highway railroad bridge near the road’s terminus on Church Street. To raise the main road’s grade, they also needed to alter his driveway, and presented him with a proposal.

“We immediately looked at our profile on our driveway and immediately let them know that we didn’t think it was going to work. You’re doing this long enough, you can kind of tell,” he said.

Marcinko said the county came back with a second design, which he rejected on the same grounds. But Cobb’s transportation department went ahead and began construction anyway.

Asked to verify that statement, the county said, “In order to deliver a project in a timely manner, preliminary plans rather than final are used to acquire Right of Way and easements. Both DOT and the Marcinkos acknowledged that the preliminary plans were not final.”

After his trucks got stuck several times, Marcinko then went to DOT, who seemed incredulous.

“They were like, ‘oh, we don’t believe it, we gotta see this,’” he said. “They wouldn’t believe that we were—they thought we were just getting stuck on purpose or something. I don’t really know what the hell they were thinking.”

DOT then sent county contractor C.W. Matthews out to try and make the turn, who Marcinko says used a near-identical trailer. They too got stuck in the same spot.

In the months since, Marcinko says the county has been harder and harder to reach. “They had just circled the wagons … coming up with every lame excuse,” he said. He’s now hired his own engineer to come up with a design, and says he’d do the rebuild himself if the county allowed it.

Cobb says it has offered four different solutions to Marcinko: finalize the initial paving, rebuild the driveway again under a new design, hire an independent engineer to review the issue, and build a driveway out onto Marble Mill Road. All, the county says, were rejected by Marcinko. The county also says it arranged a meeting earlier this month to settle on a final proposal, which Marcinko did not attend.

The county also disputes the heart of Marcinko’s argument — that the driveway was perfectly navigable for trailers before DOT showed up.

“The Marcinkos’ lowboy trailers can be hydraulically raised, and the engineer’s analysis indicates that they needed to be raised in the preconstruction condition,” the county said. “Both the current driveway and proposed design indicate a reduction in the amount that the trailers need to be raised. However, the improvement does not eliminate the raising.”

“It’s a lie. Absolutely a lie. We never did that, ever, in three decades,” he said.

Though Marcinko has consulted an attorney, “to make sure we don’t do anything stupid in our responses,” he maintains he has no intention of legal action. At a meeting with the county Thursday, he and the DOT engineers agreed to develop a fourth — and final — design.

“I’m a contractor. We make mistakes all the time, I fully admit that. But we fix them. That’s what we do,” Marcinko said. “I just want them to fix the driveway. It’s the right thing to do.”