3M fires back at Trump over order to produce mo… 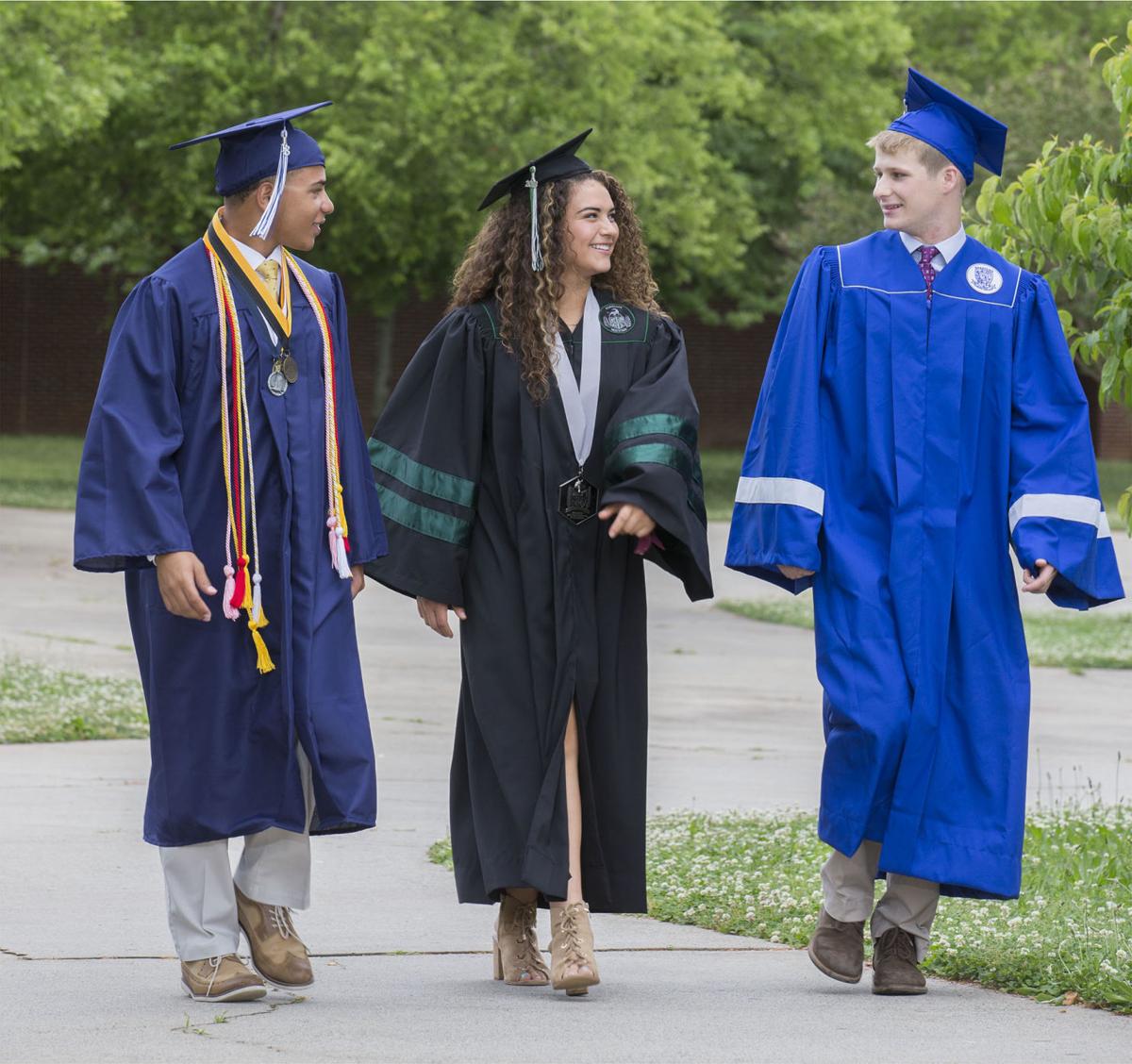 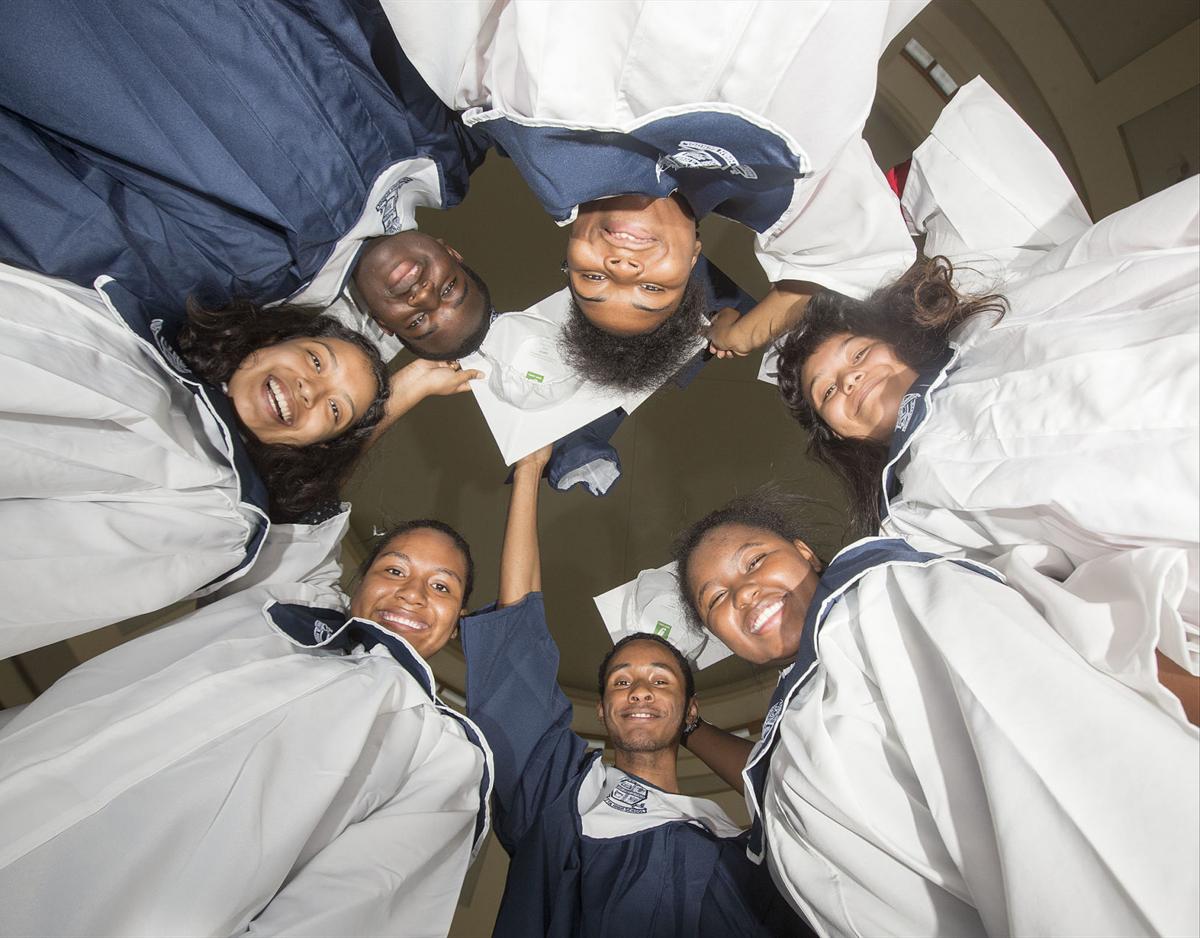 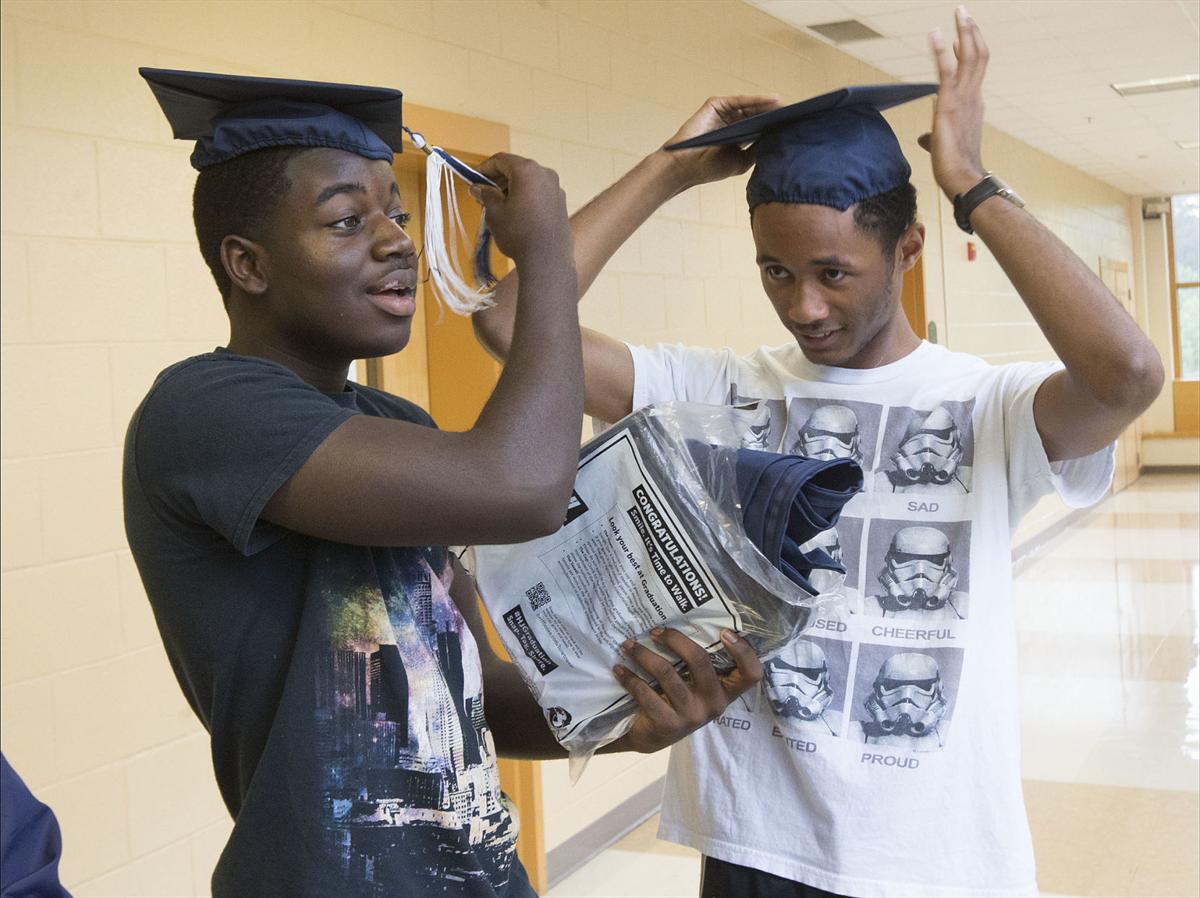 Graduating Marietta High School seniors Derrick Henderson and Jelani O'Neal try on their mortar boards at the school as they prepare for the commencement exercise on May 26 at Northcutt Stadium. Staff-Kelly J. Huff 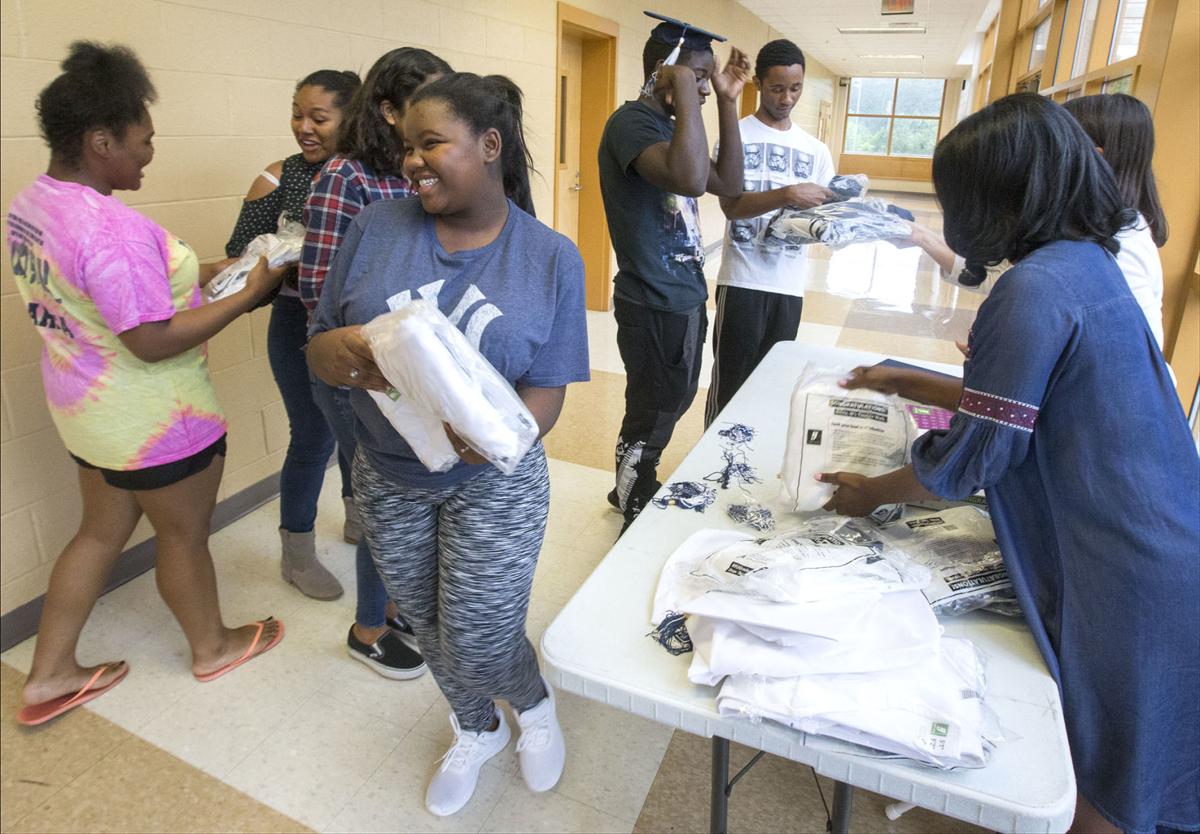 Graduating Marietta High School senior Colbie Lawson is all excited as she receives her cap and gown from counselors Betsy Alpert and Chenedra Garnigan at the school as she and her classmates prepare for the commencement exercise on May 26 at Northcutt Stadium. Staff-Kelly J. Huff 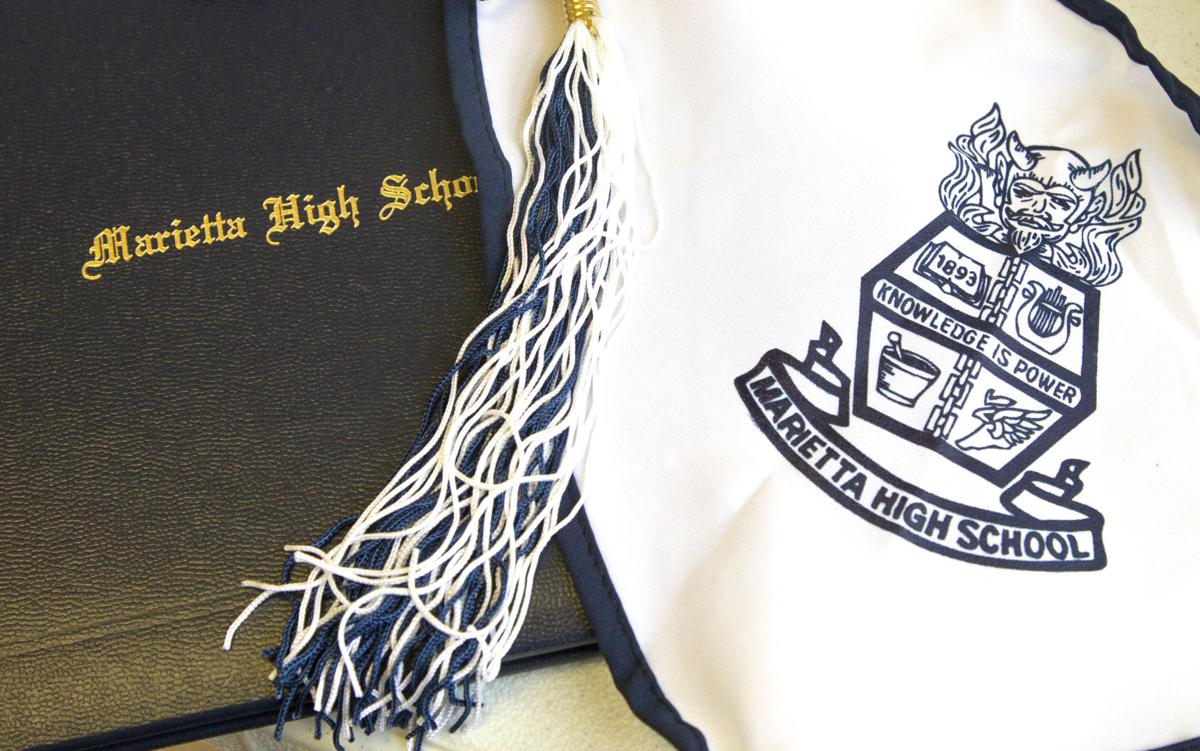 Graduating Marietta High School seniors Derrick Henderson and Jelani O'Neal try on their mortar boards at the school as they prepare for the commencement exercise on May 26 at Northcutt Stadium. Staff-Kelly J. Huff

Graduating Marietta High School senior Colbie Lawson is all excited as she receives her cap and gown from counselors Betsy Alpert and Chenedra Garnigan at the school as she and her classmates prepare for the commencement exercise on May 26 at Northcutt Stadium. Staff-Kelly J. Huff

It’s that time of year again — when the county’s high school seniors get decked out in their caps and gowns and walk across the stage to pick up their diplomas.

It’s the moment they’ve waited for their entire academic careers. While many are college-bound, some students have other plans after high school — be it a year off to travel, enlisting in the armed services or heading right into the workforce. But principals across Cobb say this graduating class is special.

For longtime Walton High Principal Judy McNeill, Tuesday’s commencement ceremony will be her last. McNeill is retiring this summer after 30 years at the east Cobb school. She joined the district in 1983 and worked as a teacher, guidance counselor and administrator before becoming principal.

For McNeill, the class of ‘18 is special because it is the first graduating class to use Walton’s new building.

McNeill said she had been at the school so long she didn’t realize just how badly her students needed the upgrade. In fact, some of the Walton parents were students McNeill counseled when she first started at the school.

“This has been such a great class,” she said. “They have offered great leadership, and we’ve had a super year.”

Test scores that topped the county, an undefeated football season, a state championship volleyball team and a record number of Nation-al Merit semi-finalists were just some of the accolades for this year’s graduating class, McNeill said.

Final grades aren’t in until next week but dis-trict officials estimate about 8,500 Cobb stu-dents will walk across the stage over five days of commencement ceremonies.

Another principal who says this year’s gradu-ation will be special is Marietta High School principal Gabe Carmona, who has accepted a position as principal of North Paulding High next year. He said this class holds a special place in his heart— not just because it’s his last year as Marietta’s principal, but because he’s known many of the students since they were in third grade at Lockheed Elementary.

Carmona has served as principal of four Marietta schools since joining the district in 2007—Lockheed, Marietta Middle, the Marietta Sixth Grade Academy and Marietta High.

“If they were in Marietta, I had them at the Sixth Grade Academy,” Carmona said.

Coupled with their time in lower grades, Car-mona estimates he’s been with many of this year’s seniors six or seven years, about half their time in Marietta’s school system.

“I have a unique opportunity that most educators just don’t have,” Carmona said. “I’ve had the pleasure and the honor to meet them at a younger age and watch them mature, develop and grow. It has been special.”

This year’s Marietta seniors have been accepted to more than 100 different colleges across the nation.

Cobb County Schools is expected to release additional info on its graduates early next week.

Marietta’s graduation will be held 9 a.m. Satur-day, May 26, at Northcutt Stadium.

• Mount Paran Christian School graduated 115 seniors Saturday at Turner Chapel AME in Marietta. Every one of them is college-bound.

• Brookwood Christian Language School in Acworth will host its graduation ceremony Friday, May 25 at 6 p.m. at the First Baptist Church in Acworth. Nine students will receive their diplomas.

• Two students are graduating from Center Academy in Smyrna Friday, May 25 at 7 p.m. at Sharon Baptist Church along South Cobb Drive.

• Cumberland Christian Academy is holding its graduation ceremony Friday, May 25 at 7 p.m. at Floyd Road Baptist Church. They are graduating 35 students.

• Praise Academy in Powder Springs is graduating 32 students Friday, May 25, at 7:30 p.m. at Macland Baptist Church.

• The SAE School in Mableton held a ceremony for its two graduating seniors Thursday evening.

• Omega Private Academy in Acworth is graduating six seniors Wednesday, May 23, at 11 a.m. in downtown Acworth.