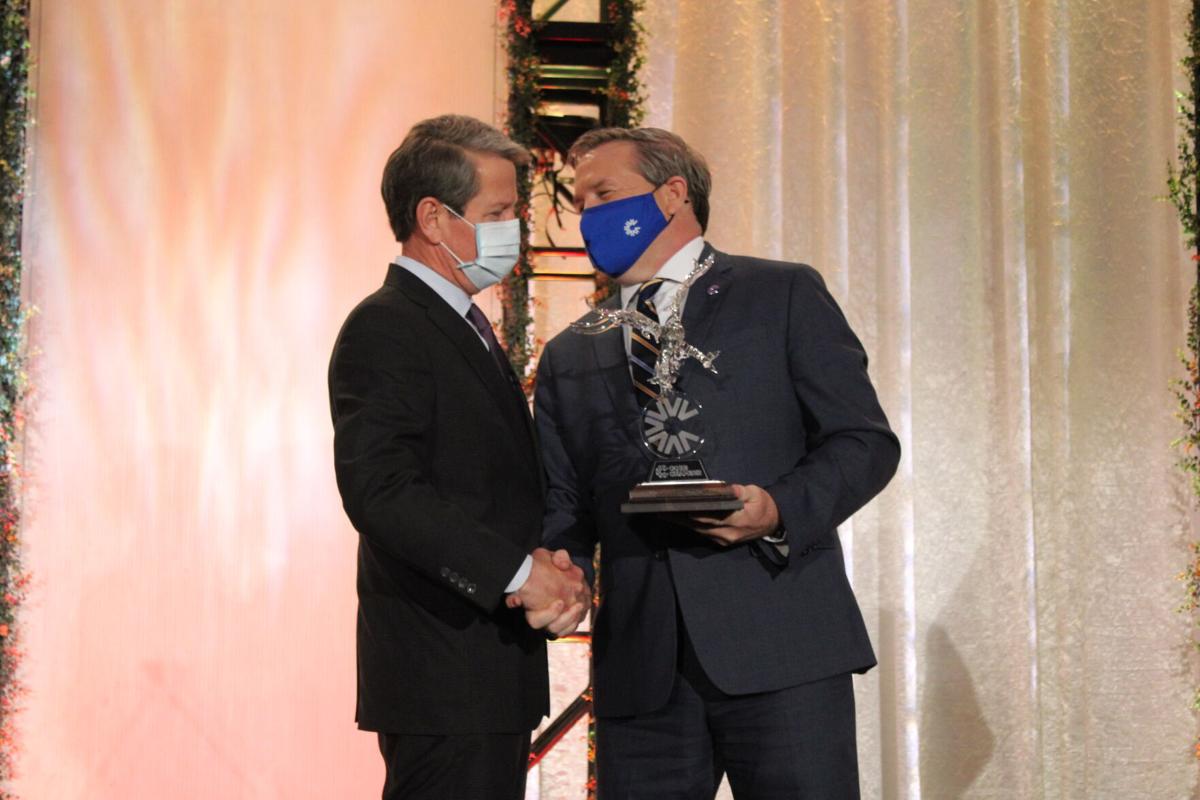 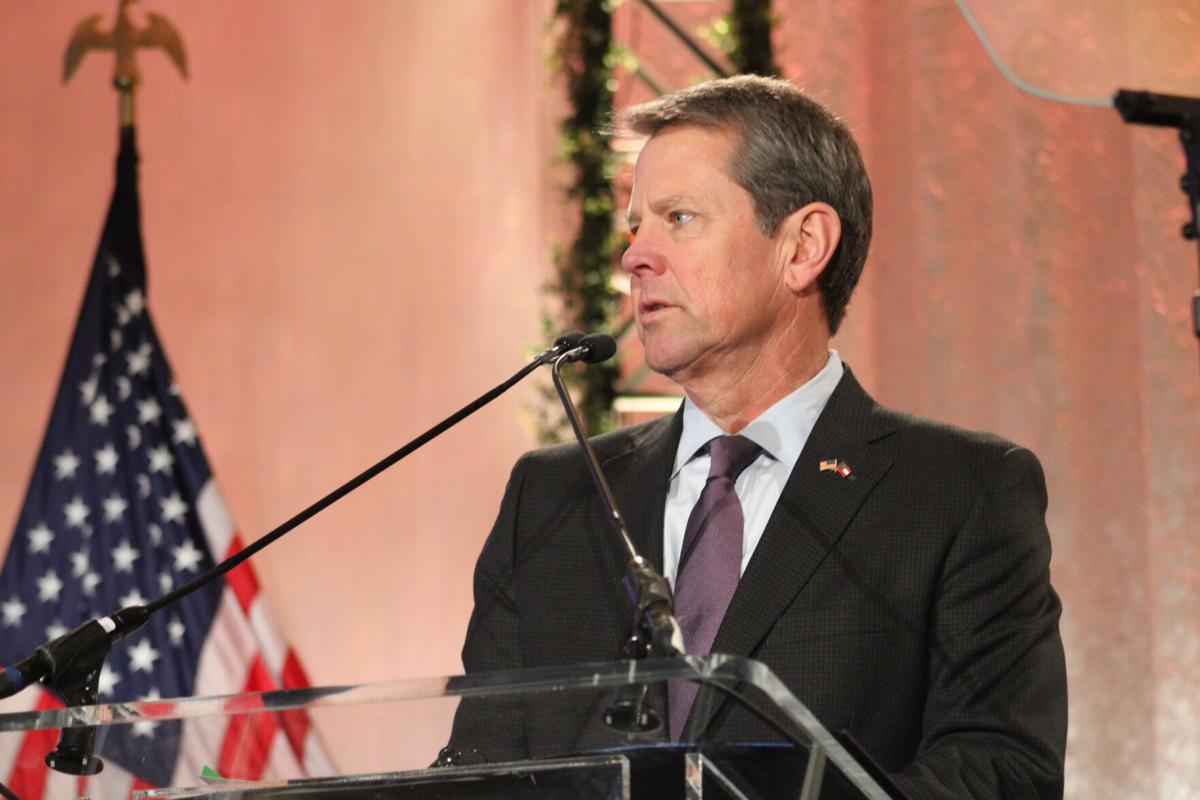 Gov. Brian Kemp addresses the Cobb Chamber of Commerce at its annual meeting at the Cobb Galleria Monday. 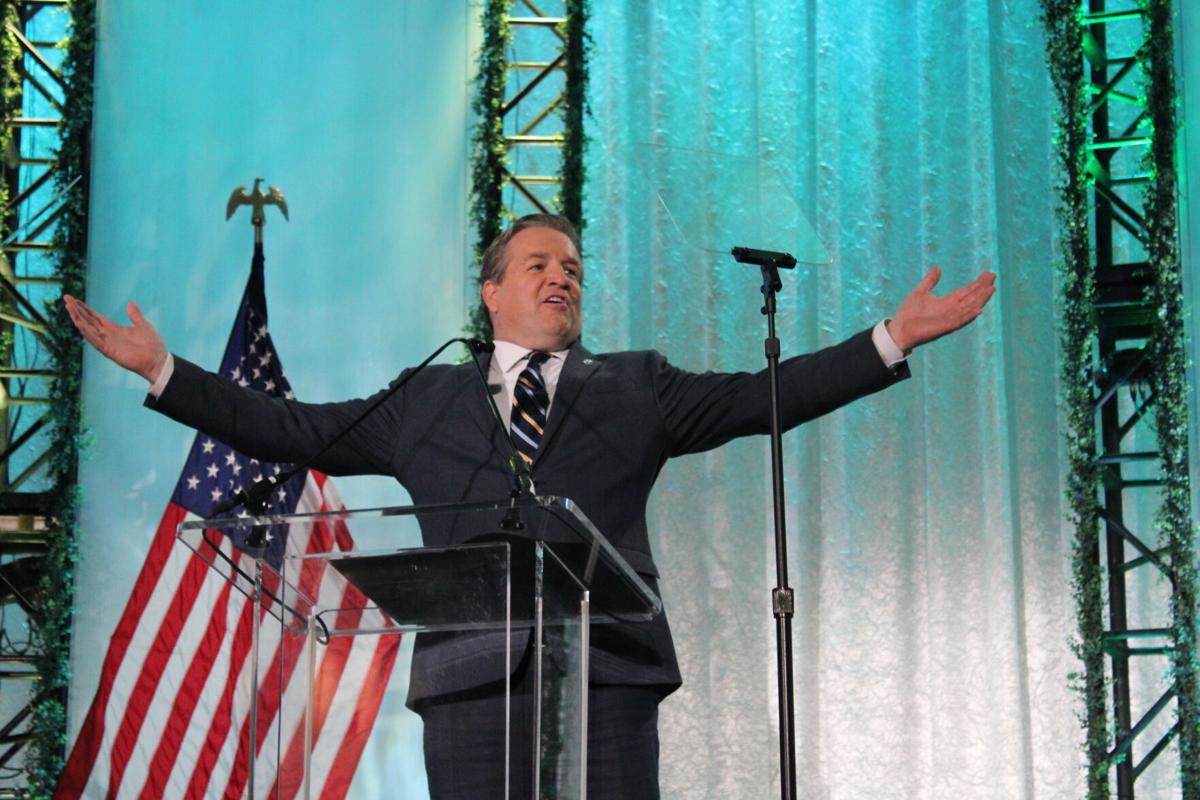 John Loud, chairman of the Cobb Chamber, kicked off the chamber's annual meeting at the Cobb Galleria Monday. 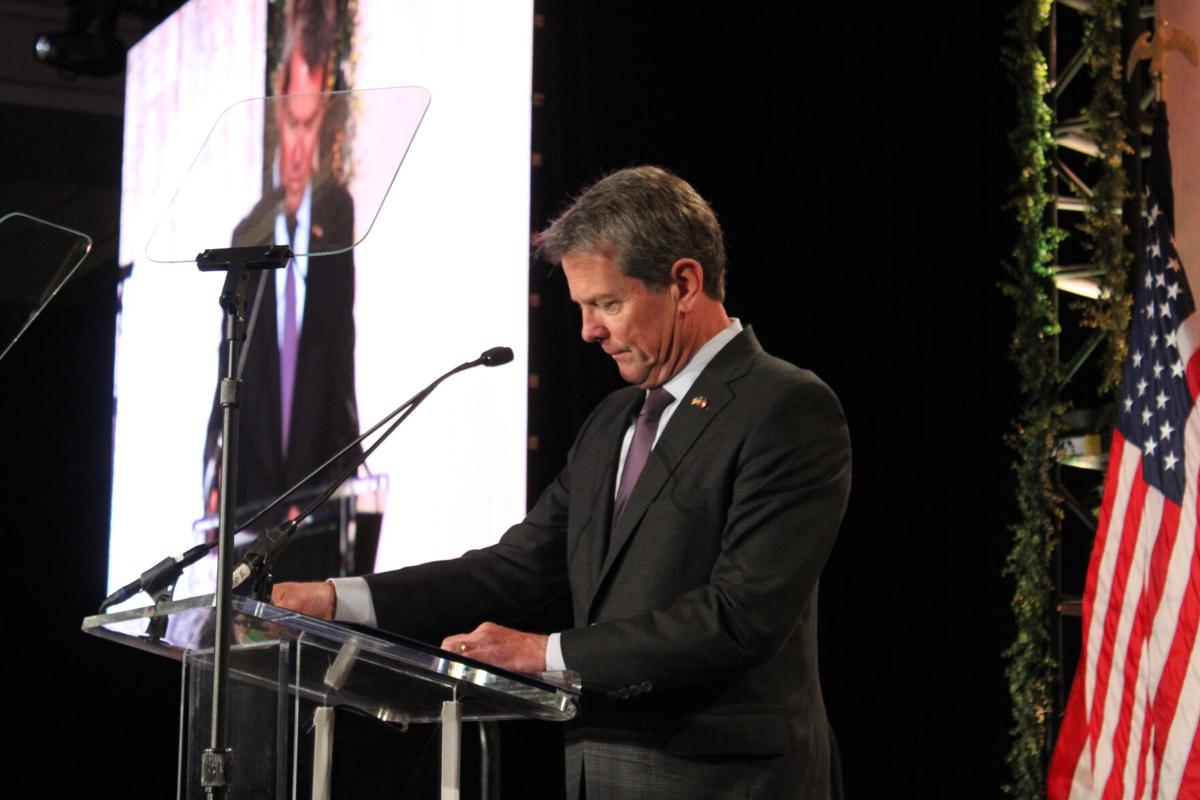 Gov. Brian Kemp offered a less combative message to the Cobb Chamber on Monday than he has in recent weeks, calling the backlash to Georgia's new elections law "misguided."

Gov. Brian Kemp addresses the Cobb Chamber of Commerce at its annual meeting at the Cobb Galleria Monday.

John Loud, chairman of the Cobb Chamber, kicked off the chamber's annual meeting at the Cobb Galleria Monday.

Gov. Brian Kemp offered a less combative message to the Cobb Chamber on Monday than he has in recent weeks, calling the backlash to Georgia's new elections law "misguided."

CUMBERLAND — If Gov. Brian Kemp is still fuming over the MLB’s decision to pull the 2021 All-Star Game from Cobb County, it hardly showed at his address to the Cobb Chamber of Commerce Monday.

“I know you all have known that I’ve been pretty upset, certainly here the last 24 hours,” Kemp said, “and rightly so, because the refs screwed us at the Braves game last night.”

Setting aside the scorched-earth rhetoric of recent weeks, Kemp boasted a message of unity for business’ sake at the chamber’s annual meeting at the Cobb Galleria. The governor promised to soon sign legislation whose economic benefits would be “far beyond the value of any All-Star Game.”

Kemp didn’t shy away from his refrain that Georgia’s new voting laws make it easier to vote and harder to cheat. But he also lowered the temperature on his references to the Democratic response to the law, calling it a “misguided backlash,” and the MLB’s pulling of the game an “unfortunate decision.”

And he seemed to suggest that, despite widespread opposition from Georgia’s most prominent Democrats, the real rabble-rousers over the elections law are beyond state lines.

“While those who live outside our state will try to divide us and stop our success in its tracks, as Georgia’s 83rd governor, I will always fight for the business community,” Kemp told the chamber crowd.

The more diplomatic tone from the governor contrasted with his remarks on Saturday at a Marietta restaurant, in which he called President Joe Biden’s opposition to the law a “big lie on steroids.”

Chamber Chairman John Loud, who later in the event presented Kemp with the Johnny H. Isakson Leadership Award, said he appreciated Kemp’s attentiveness to business concerns during the speech, as opposed to partisanship.

After the event, state Rep. Erick Allen, D-Smyrna, who chairs the Cobb Legislative Delegation, said he had expected Kemp to make a more forceful defense of the voting laws.

“I thought he would spend more time on the elections bill and the impact that it’s had. But, you know, I think it struck the right tone for now,” Allen said. “I expected him to come and sell it as a net positive, when it’s a lot more nuanced than that … I’m not shocked that he didn’t, because the more you think about it, it’s a hard sell to make.”

Lisa Cupid, chair of the Cobb Board of Commissioners, mirrored the governor’s more conciliatory approach to the political firestorms of recent weeks.

“We thank him for being here and recognizing the strength of Cobb, and hope that he can see that as a state and county we’re all better working together,” Cupid said. “We’ve always been a state that cared about economic development and commerce, and that includes our sports industry.”

Cupid added she has had several conversations with the governor’s office since the signing of Senate Bill 202, but declined to share the content of those discussions for the time being.

Stacy Abrams complained till they moved the game and now all venues lost money all due to deceased not being allowed to vote and you can’t vote 15 times. I can certainly understand why she is upset the democratic members hate having to be on a level playing field. Great job Kemp don’t back done. USA

Gov Kemp thank you for an honest voting system. Congrats to all the democratic members who cost their own city and citizens millions of dollars. Don’t you just hate it when we all play on a level field.

I am not surprised at all of the Democratic bloviating & ourtight lying taking place concerning this bill. What is hard to understand is why the media does not fact check or examine their outrageious claims the way they did when Trump made outrageous claims about anything.

Y'all hear Kemp going on about cancel culture over at the Cobb GOP's prime abandoned strip mall location? And what was it that brought him to Cobb GOP HQ to speak? His cancel of Georgia voters! The irony. It is just too much. GOP HQ in an empty strip mall is funny enough on its own, but then Kemp whined about cancel culture during his attempts at explaining away his cancel of Georgia voters! Ha ha ha ha ha! How much longer are we stuck with this goofball of a Gub'ner? I Lolsob for us all... Everyone!

There's a new election law in Florida. Here's how it will affect the way you vote