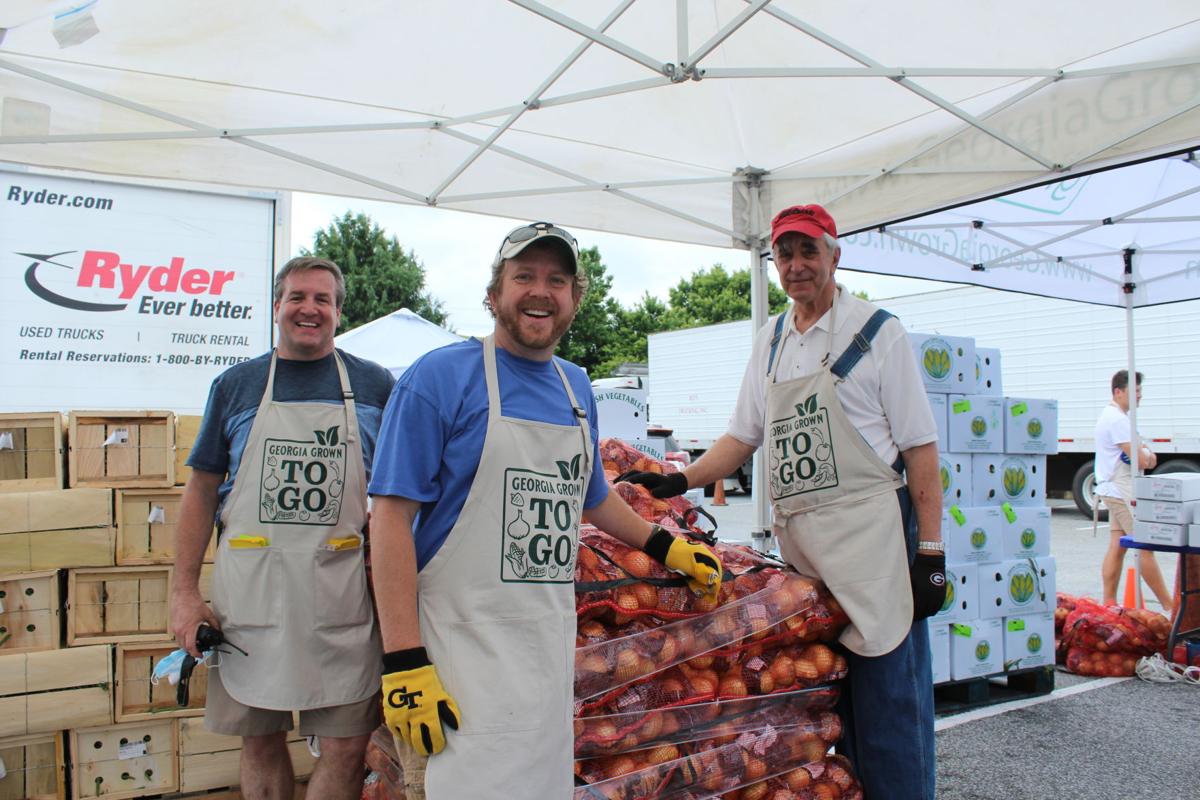 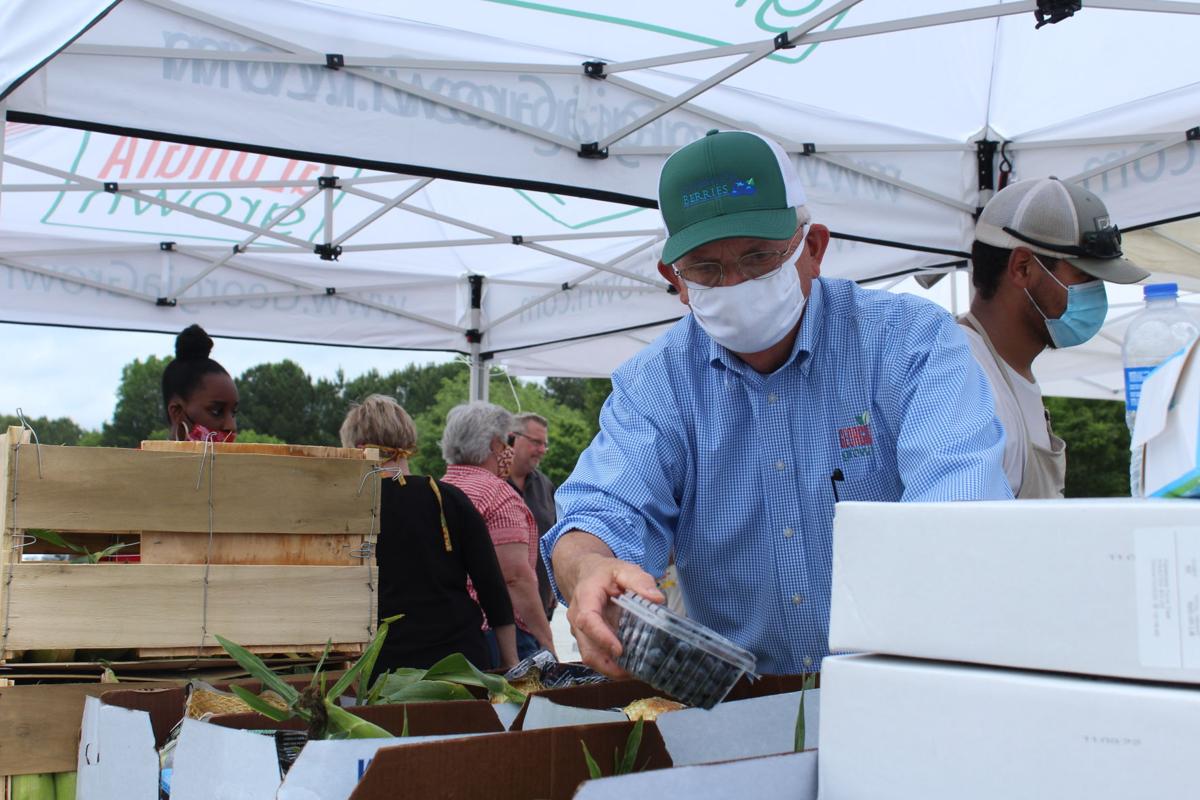 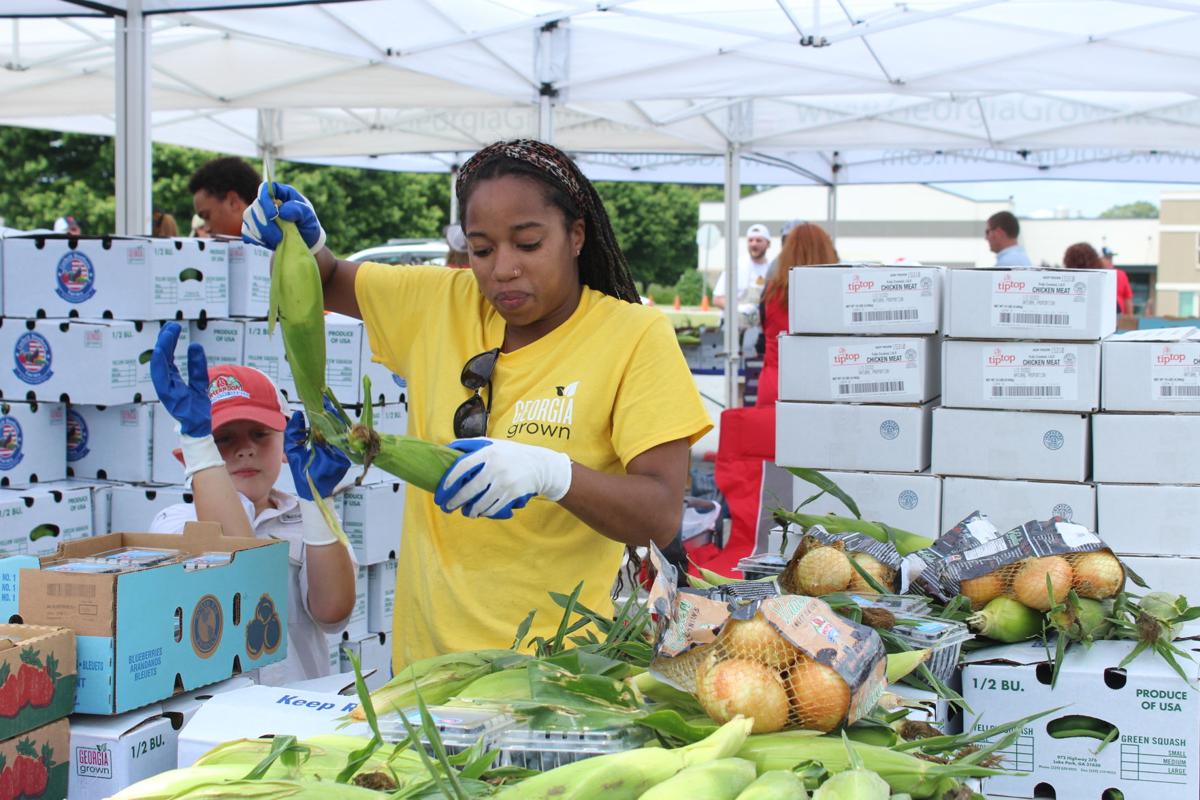 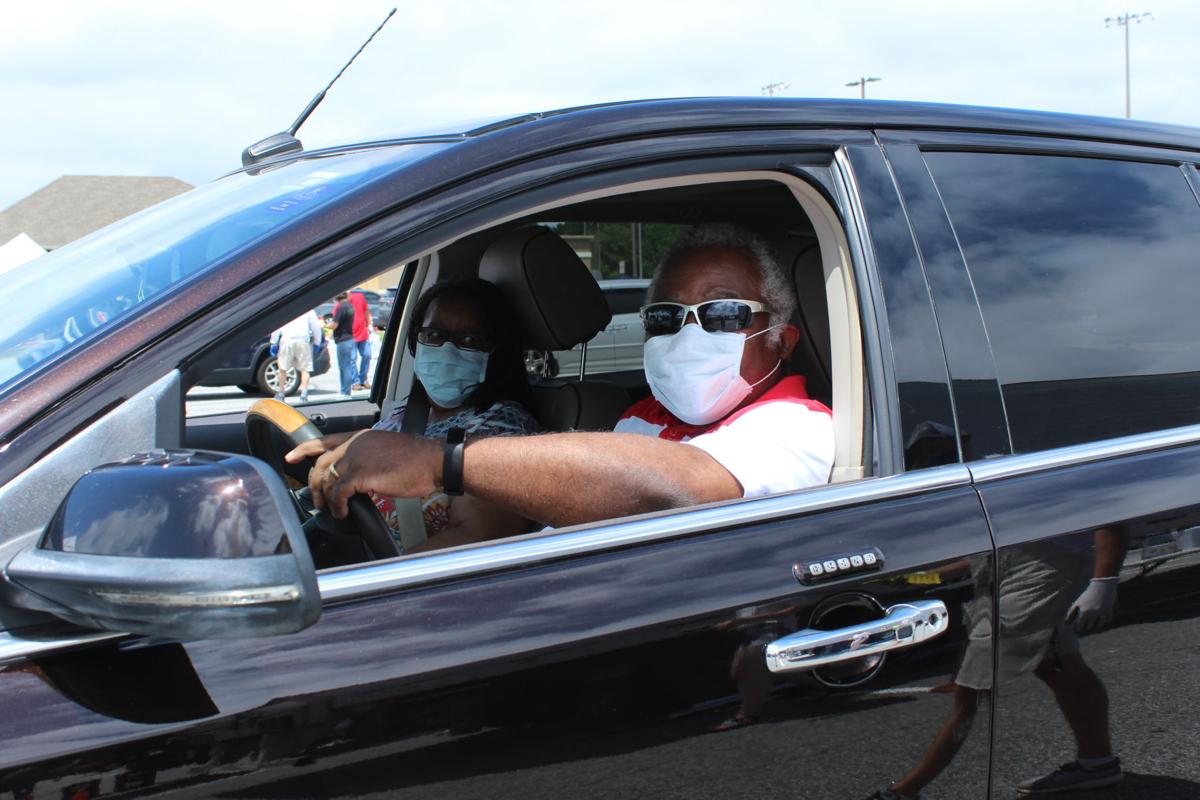 Rodney and Linda Haymore of Acworth wait for volunteers to load their order of produce into their car. 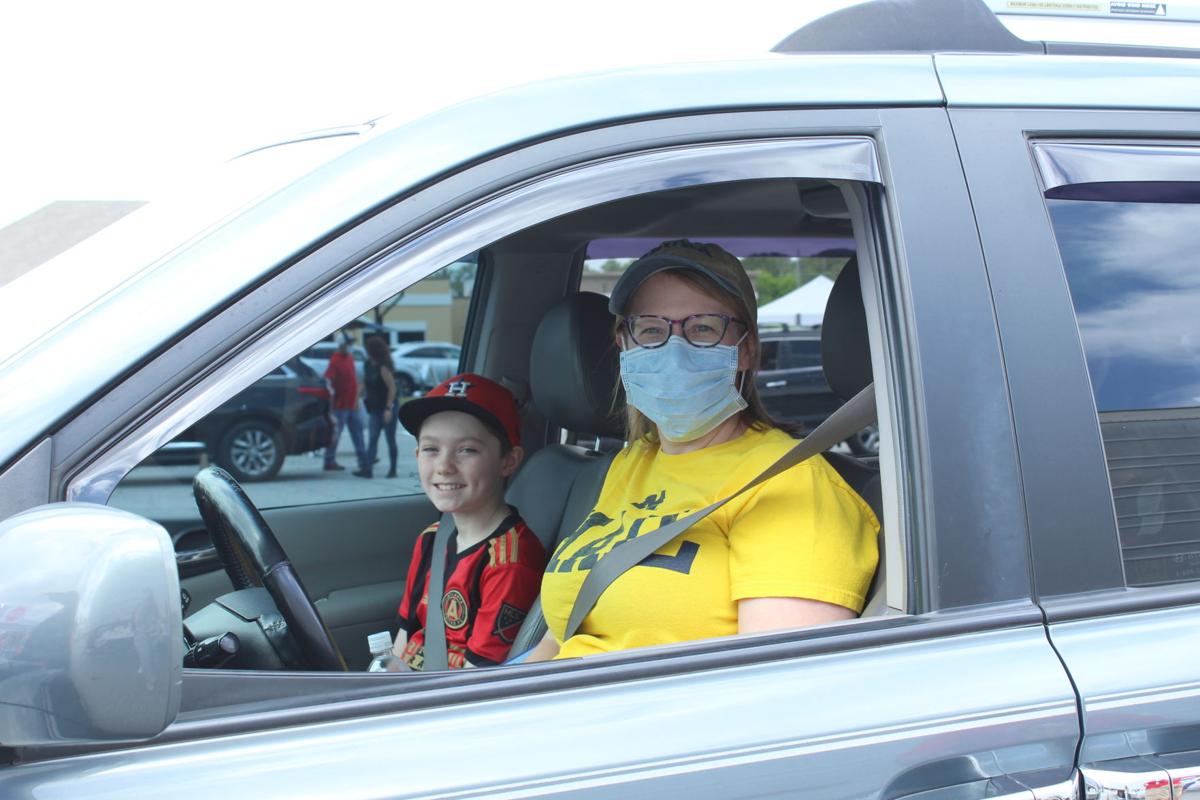 Jennifer Fisher of Marietta and her son Cole, 11, wait for volunteers to fill their car with fresh produce at the Georgia Grown To-Go drive-thru farmers market in Cobb County. 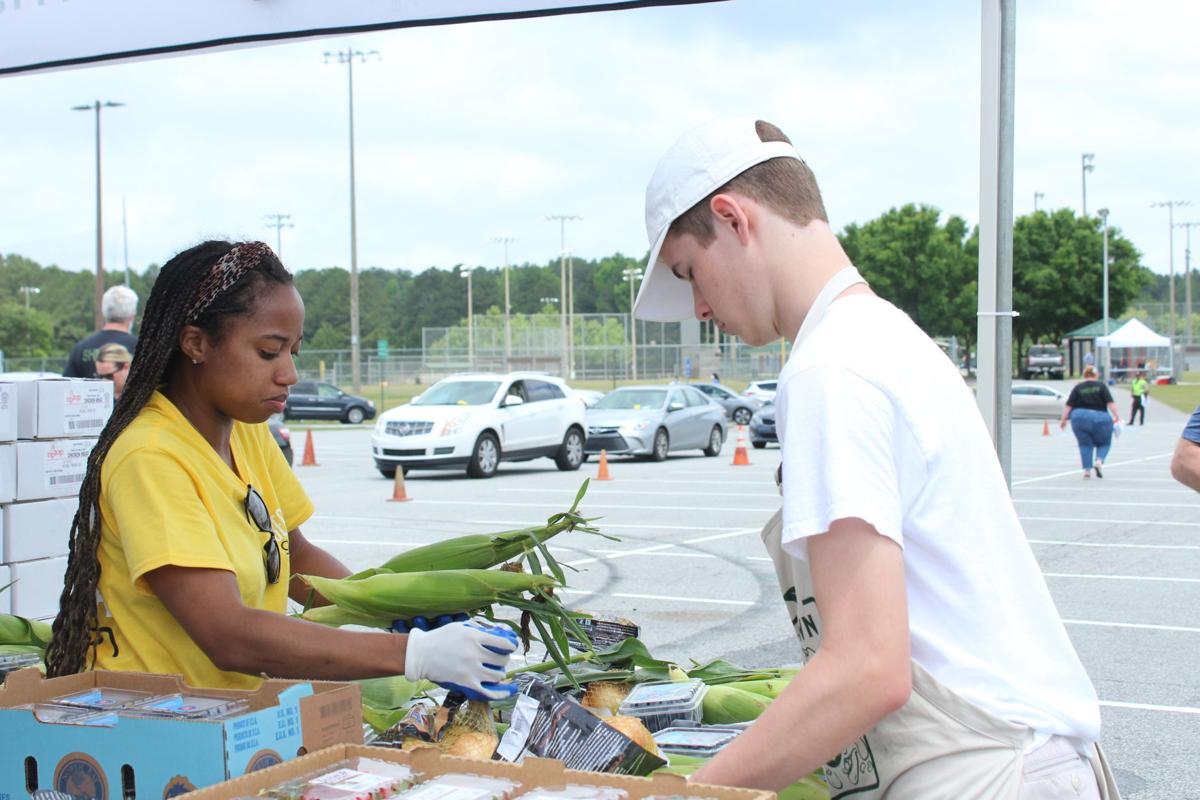 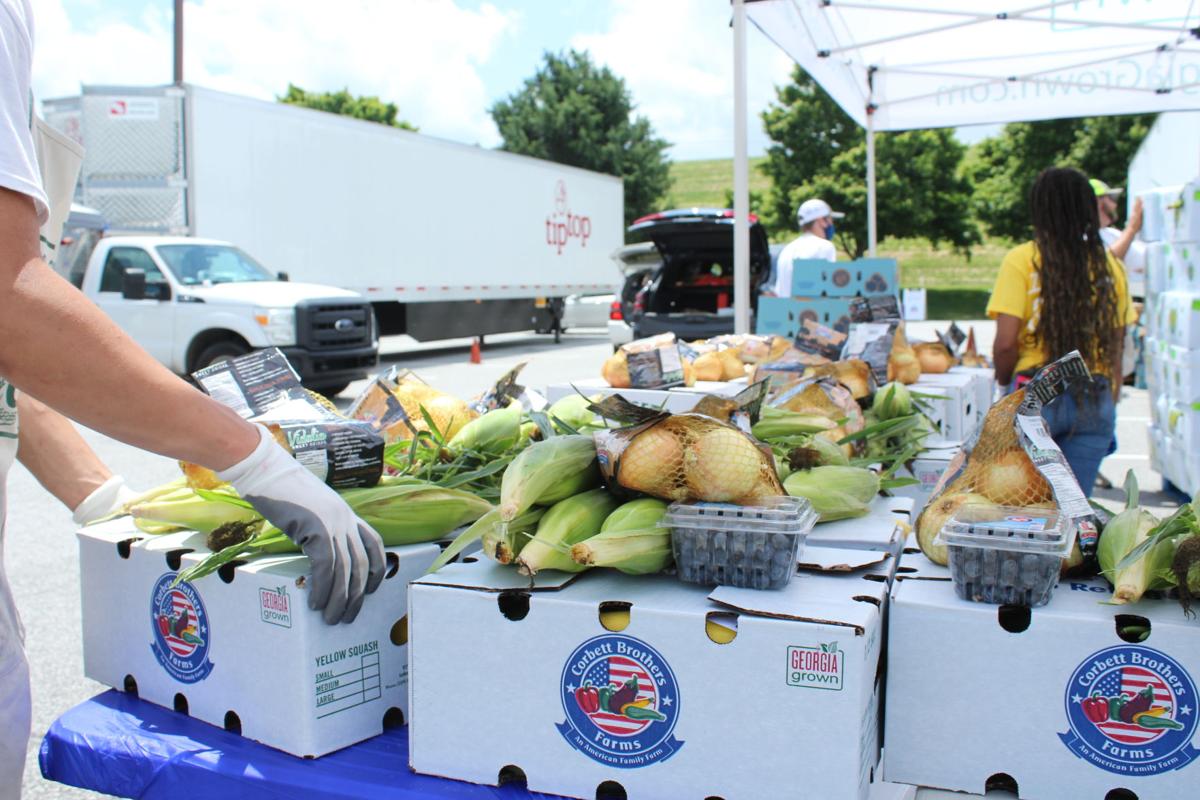 A volunteer picks up produce boxes with onions, blueberries and corn at the Georgia Grown To-Go drive-thru farmers market.

Rodney and Linda Haymore of Acworth wait for volunteers to load their order of produce into their car.

Jennifer Fisher of Marietta and her son Cole, 11, wait for volunteers to fill their car with fresh produce at the Georgia Grown To-Go drive-thru farmers market in Cobb County.

A volunteer picks up produce boxes with onions, blueberries and corn at the Georgia Grown To-Go drive-thru farmers market.

MARIETTA — Thousands of people from Cobb County and surrounding areas lined up on Powder Springs Street on Saturday to get fresh produce from Georgia farmers via drive-thru at Al Bishop Park near Marietta.

Georgia Grown To-Go, hosted by the Georgia Department of Agriculture and Cobb County, connected farmers from across the state, including Cobb-based Tip Top Poultry, with local buyers.

Those who bought produce also had the option to buy boxes of fruit and vegetables for some of Cobb’s charities, including MUST Ministries.

Georgia Commissioner of Agriculture Gary Black said it’s important for people to see the farmers and others who produce the food they eat, and added that the to-go farmers market was both an opportunity for producers to sell at a good price and for customers to get value for their fresh food.

“When many of us went into the grocery store eight or 10 weeks ago, for the first time in our lives, we saw an empty shelf,” he said. “I don’t think consumers are going to lose that picture from their minds and I think they’re going to perhaps recognize that agriculture and the food supply is a very important component of our natural security. And when that was challenged, just for a week or two, I think that created a picture in our minds that makes events like this that much more important in the future because they’re going to see these are real farmers, real people and real businesses, and their product is really good and it’s fresh.”

Sarah Dolbier, a Smyrna resident, said she normally goes to farmers markets that are currently closed because of coronavirus concerns, so she was happy to get Georgia vegetables through the drive-thru event.

“I think it’s brilliant,” she said as was pulling up to have volunteers load her car. “Normally I would attend farmers markets over the summer, so I’m glad I’m not missing out on the crops.”

Multiple customers told the MDJ they were there to support local farmers, including Mike Van Briggle of Acworth. He said he bought blueberries, sweet corn and slow-cooked chicken for a good deal, though it took him an hour to drive into the park from Powder Springs Street.

“It’s been a good experience,” he said.

Bo Herndon, owner of Herndon Farms in Lyons near Vidalia, said he was glad to see consumers buying produce from Georgia farms like his own. He said because of the pandemic, his farm took 30-40% hit in revenue in lost business from restaurants and other retailers, and he has lost crops.

“It just makes me feel good that people are concerned about the farmers and coming out supporting the things that we grow and put on the table,” he said.

“There are so many good things that came out of it. One, we wanted to support our Georgia farmers, and two, it’s just a good event,” Tumlin said. “People are ecstatic over it. The farmers market, there’s something magical about it. Most of these products were in the fields three days ago. It’s fresh. People from all over the state are here, they’re enjoying it.”

The event, which has inspired another drive-thru farmers market in Gwinnett County scheduled for next week, was sparked by a conversation between Black and Tumlin in April, amid news reports of unsold produce going to waste while there were hungry people in need.

Tumlin emailed the agriculture commissioner asking how the Marietta farmers market could open safely. Black called him the next day.

“Could we dream a little bigger for Cobb?” Black asked the mayor.

The Georgia Department of Agriculture worked with Cobb County officials to establish Georgia Grown To-Go, which they hope will be held at multiple locations around the state. The Gwinnett drive-thru farmers market starts at 3:30 p.m. Wednesday at Coolray Field in Lawrenceville.

Protest held in Cedartown sparked by death of George Floyd