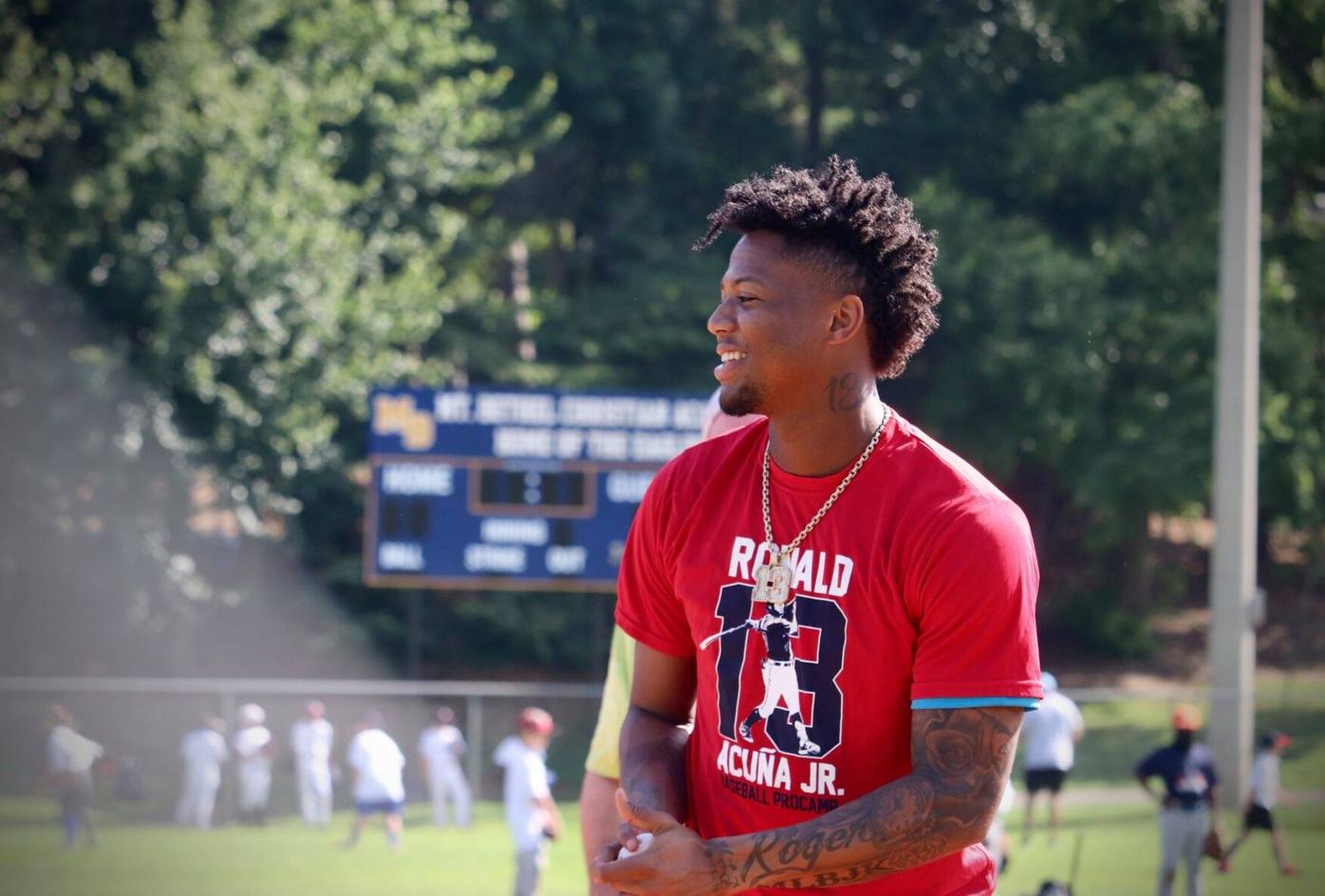 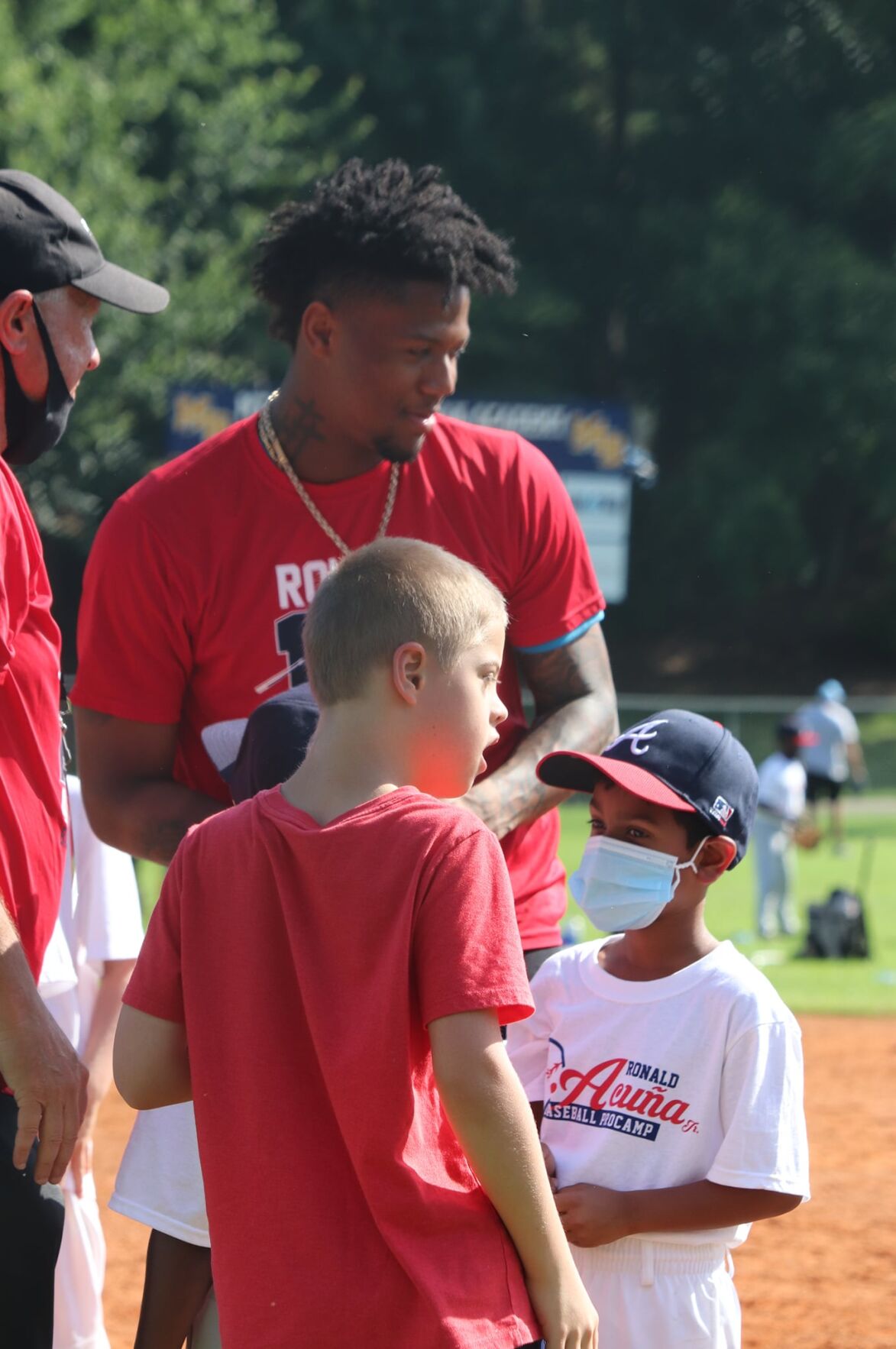 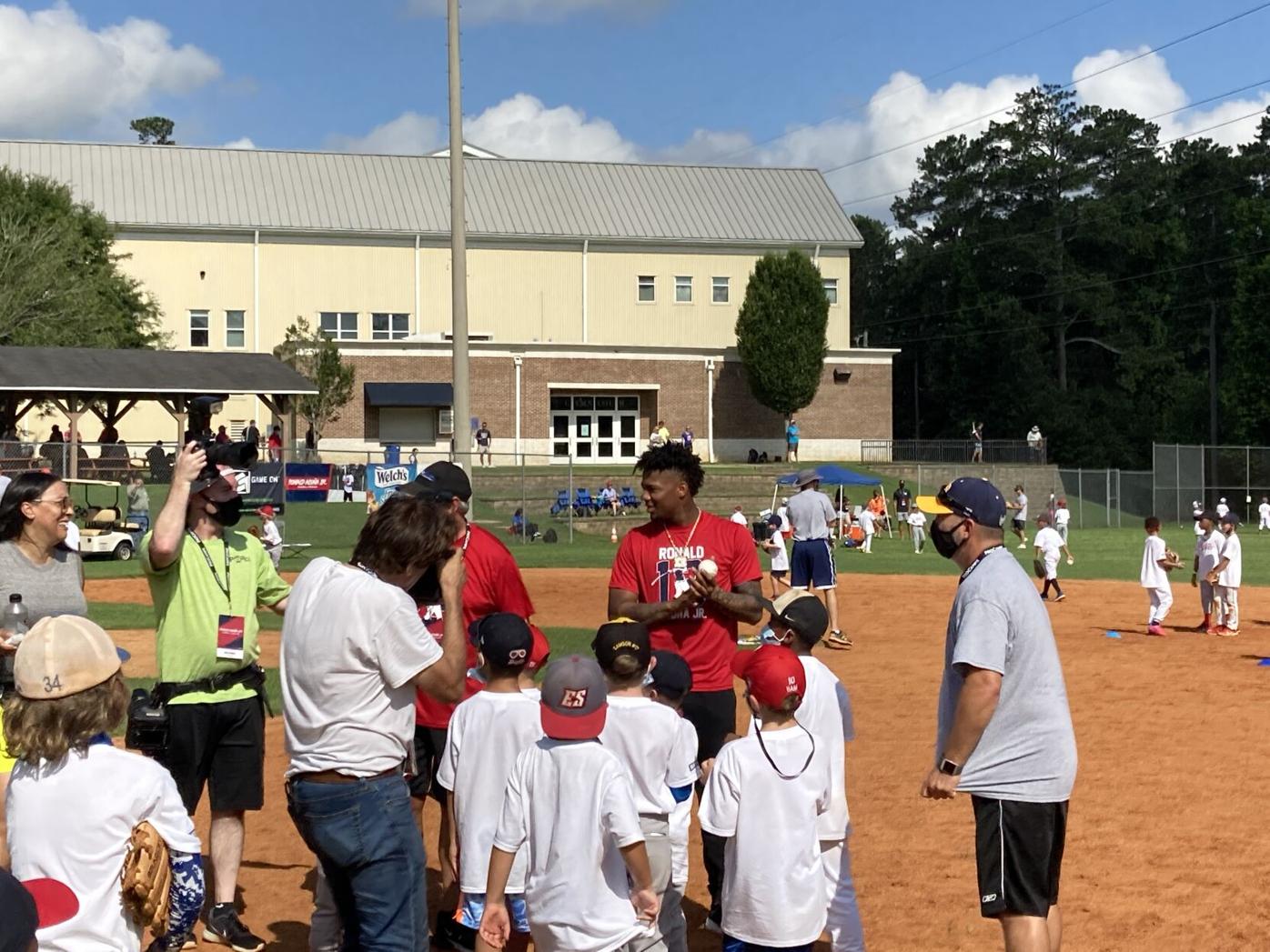 Atlanta Braves right fielder Ronald Acuna Jr. was the center of attention at a baseball camp Monday at Mt. Bethel Christian Academy in Marietta, where he shared his expertise with hundreds of young players. 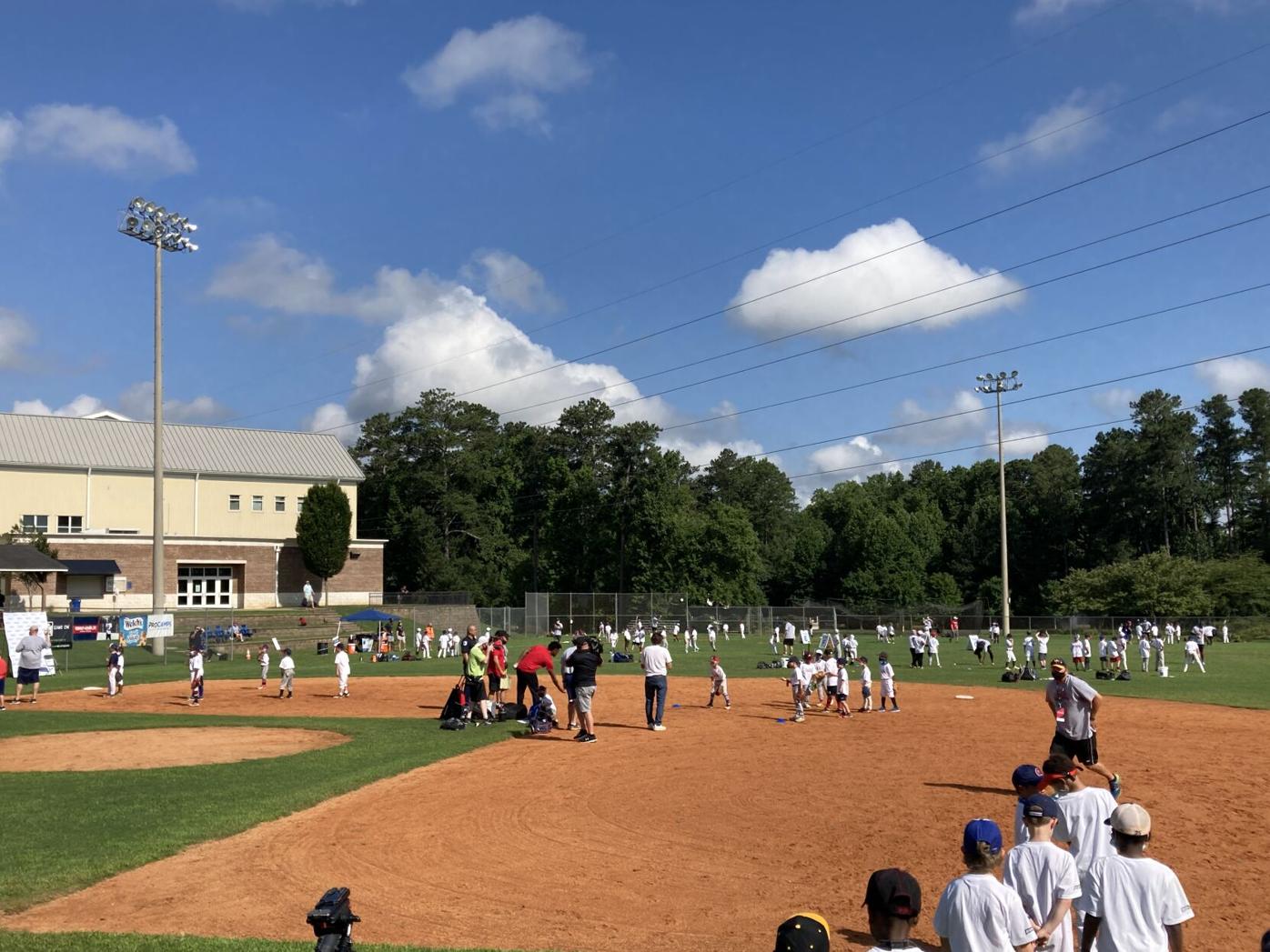 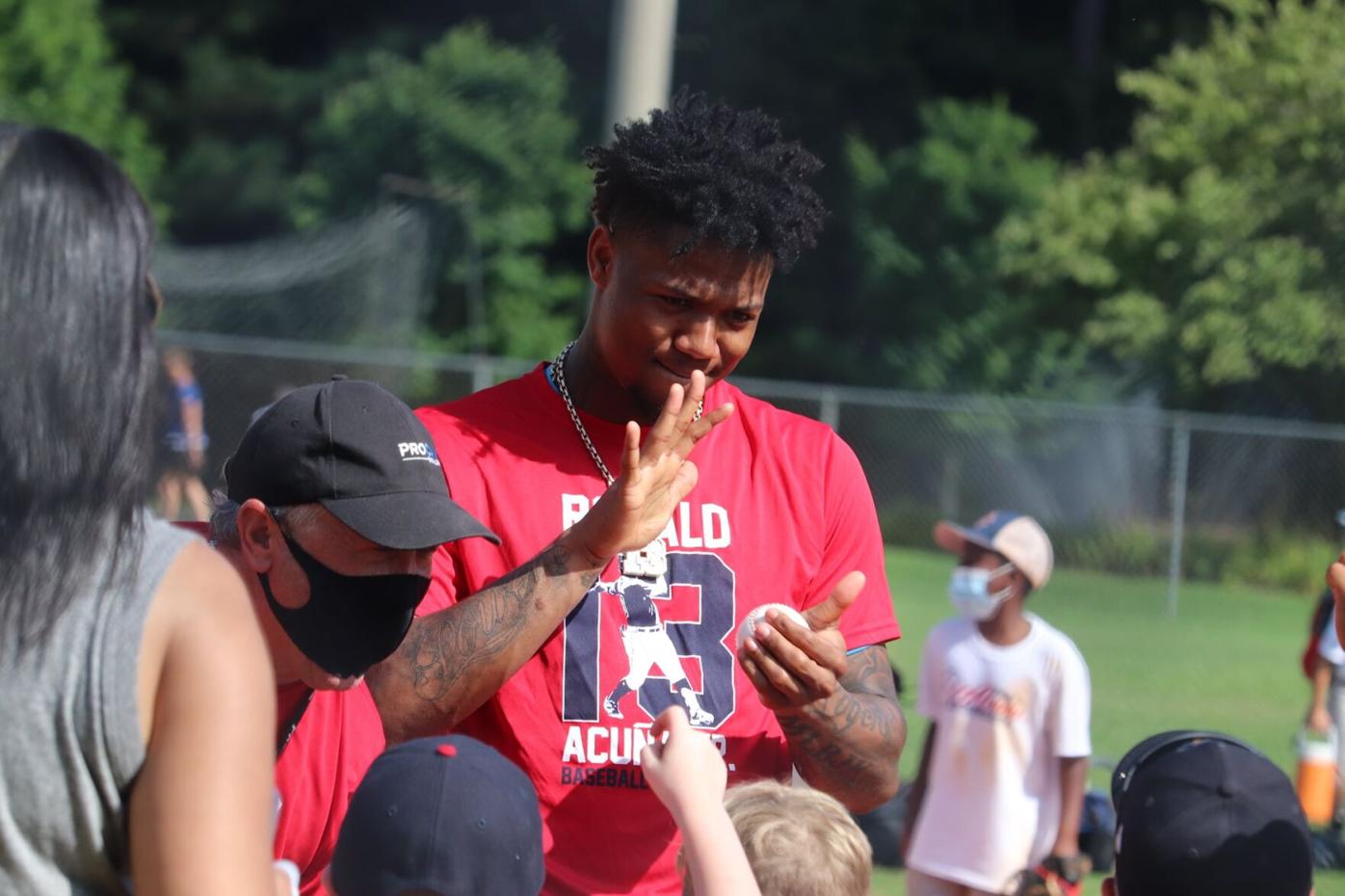 Ronald Acuna Jr. works with young ballplayers on the fields at Mt. Bethel Christian Academy in Marietta Monday. The Braves slugger teamed up with ProCamps to create a safe and fun environment for kids to enjoy the sport of baseball. See story in Sports, Page B1.

Atlanta Braves right fielder Ronald Acuna Jr. was the center of attention at a baseball camp Monday at Mt. Bethel Christian Academy in Marietta, where he shared his expertise with hundreds of young players.

Ronald Acuna Jr. works with young ballplayers on the fields at Mt. Bethel Christian Academy in Marietta Monday. The Braves slugger teamed up with ProCamps to create a safe and fun environment for kids to enjoy the sport of baseball. See story in Sports, Page B1.

Mid-80’s Georgia heat and an early morning did not stand in the way of Atlanta Braves All-Star outfielder Ronald Acuna Jr. spending time with kids in the community. The MVP candidate spent his off-day Monday leading drills and coaching hundreds of young players at a Mt. Bethel Christian Academy baseball camp.

The Braves star could be seen stealing bases, pitching wiffle balls and throwing pop-ups to children ranging in age from first to eighth grade.

The influence the young Brave has on the Cobb County community was evident from the assorted Ronald Acuna Jr. merchandise — jerseys and hats — sported by the family and friends of the campers.

Acuna Jr. has been on a tear since entering the MLB in 2018. After winning rookie of the year in his first season as a Brave he has become one of the biggest names in the sport and is a frontrunner for MVP this season.

The 23-year-old right fielder boasts a career batting average of .281 and has 102 career home runs. This season Acuna Jr. has 21 home runs and 16 stolen bases on his quest to be the first player in the “40-40 club” since Alfonso Soriano in 2006. His early success has been enough to put him in second place among this year’s MLB All-Star vote-getters, behind only Vladimir Guerrero Jr. of the Blue Jays.

Acuna Jr. teamed up with ProCamps to create a safe and fun environment for kids to enjoy the sport of baseball with one of their heroes. Kids who attended the camp were able to get a team picture with Acuna Jr., learn from the star on the field and have fun out in the sun playing baseball with their friends. Camp Director and Chief Operations Officer of ProCamps, Andy Danner, understands how important it is for these kids to enjoy the sport they love with one of their idols.

“It’s everything. I mean, I have kids of my own and for them to be cooped up, not only cooped up but not be around their teammates or their friends, that was tough,” Danner said, referencing times of isolation during brought on by COVID-19. “For these kids to be out here now, being out with other kids, being outside, I mean this is where it’s supposed to be. I think it means the world to them.”

ProCamps is an organization that allows kids to meet their sports heroes while playing the sport that they love. Although this is the first partnership with the Atlanta Braves, ProCamps has been teaming with star athletes around the country for years. The organization has created a smooth and organized schedule that is safe for kids and keeps everyone involved.

The camp was set up in a drill-based rotation with stations including infield, batting, baserunning and outfield. Coaches from around the area came to help run the stations and spread knowledge about the sport to the next generation. The turnout of coaches was bountiful and the camp full of over 300 kids had a 10-to-1 coach-to-camper ratio.

Acuna Jr. walked from station to station teaching kids different skills that would help them reach the next level in their game. Despite the busy schedule of an MLB superstar, Danner claims Acuna Jr. reached out to him about having the camp.

“He wanted to do a camp,” Danner said. “This is our first baseball camp in Atlanta, with a Brave, so you know to do it with Ronald, an MVP candidate, second all-star vote getter, it’s pretty cool.”

For the kids, meeting their hero and playing baseball was a taste of heaven. Six-year-old Jayce Cato, a Cobb County resident, has been an Acuna Jr. fan since before he can remember and his parents know how much he values getting to meet his hero.

“He’s been obsessed with Acuna Jr. before we even knew who he was and so he was real excited,” Jayce’s mother Heather Cato said.

It’s not everyday that a kid gets to meet his hero, but on this day, Acuna Jr. made that dream a reality for many young baseball fans.

Everything on the table, top Georgia senator says on abortion