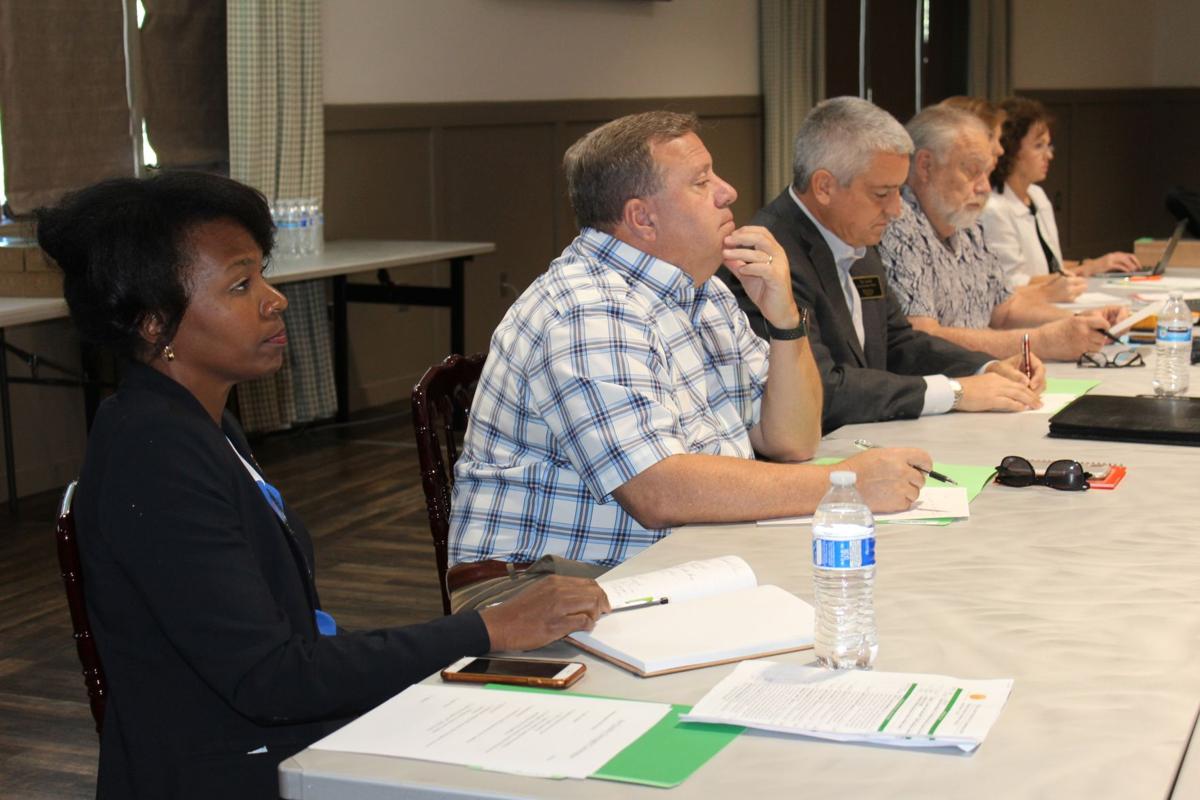 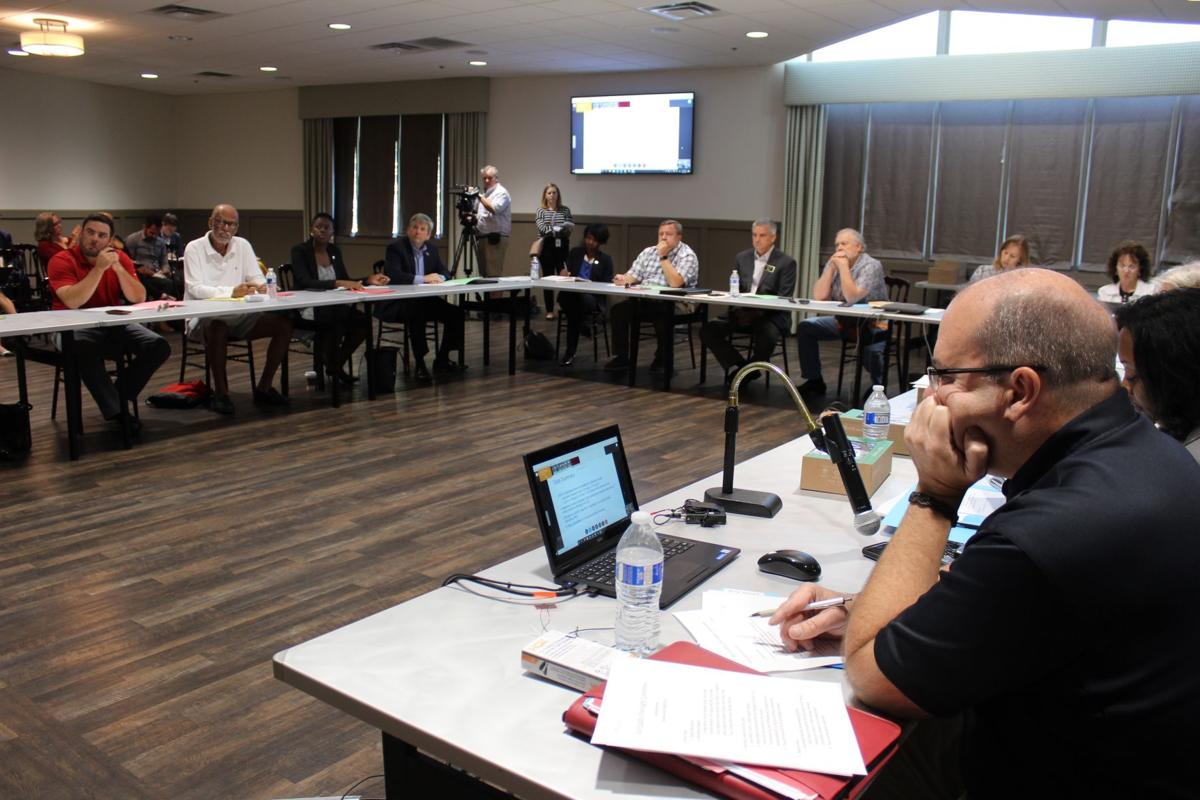 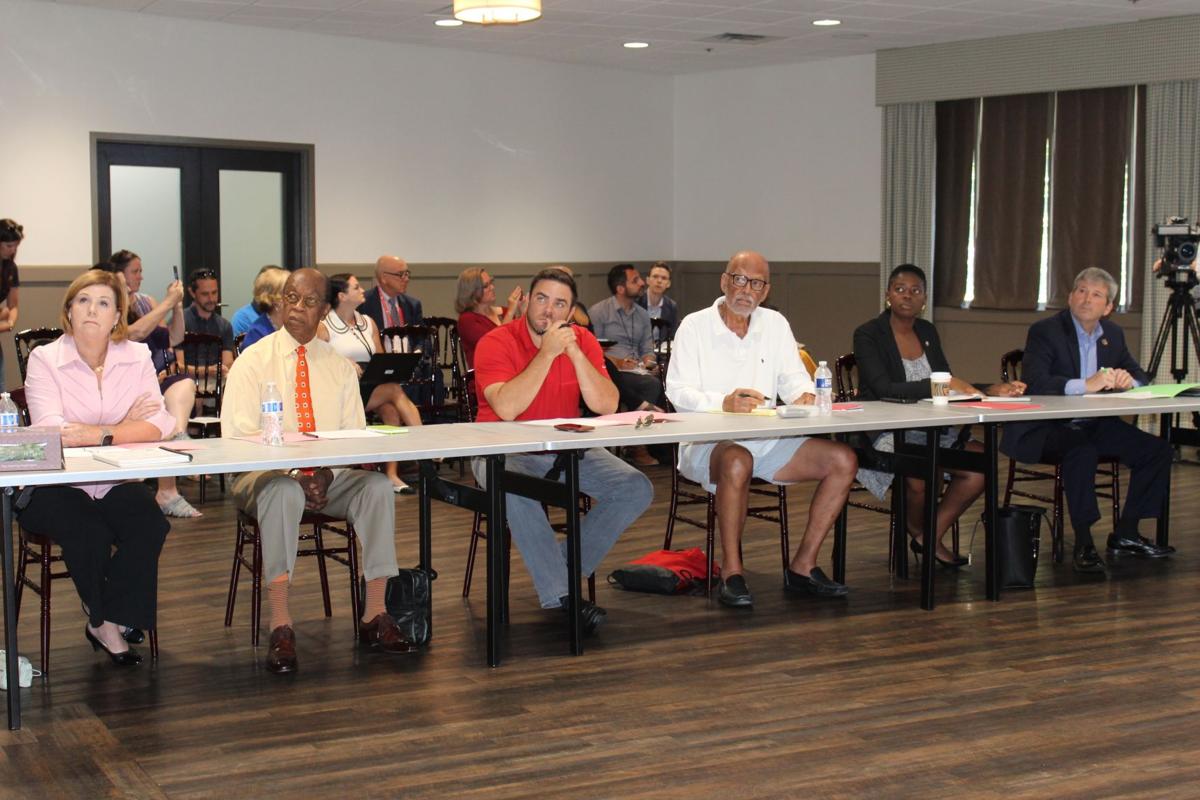 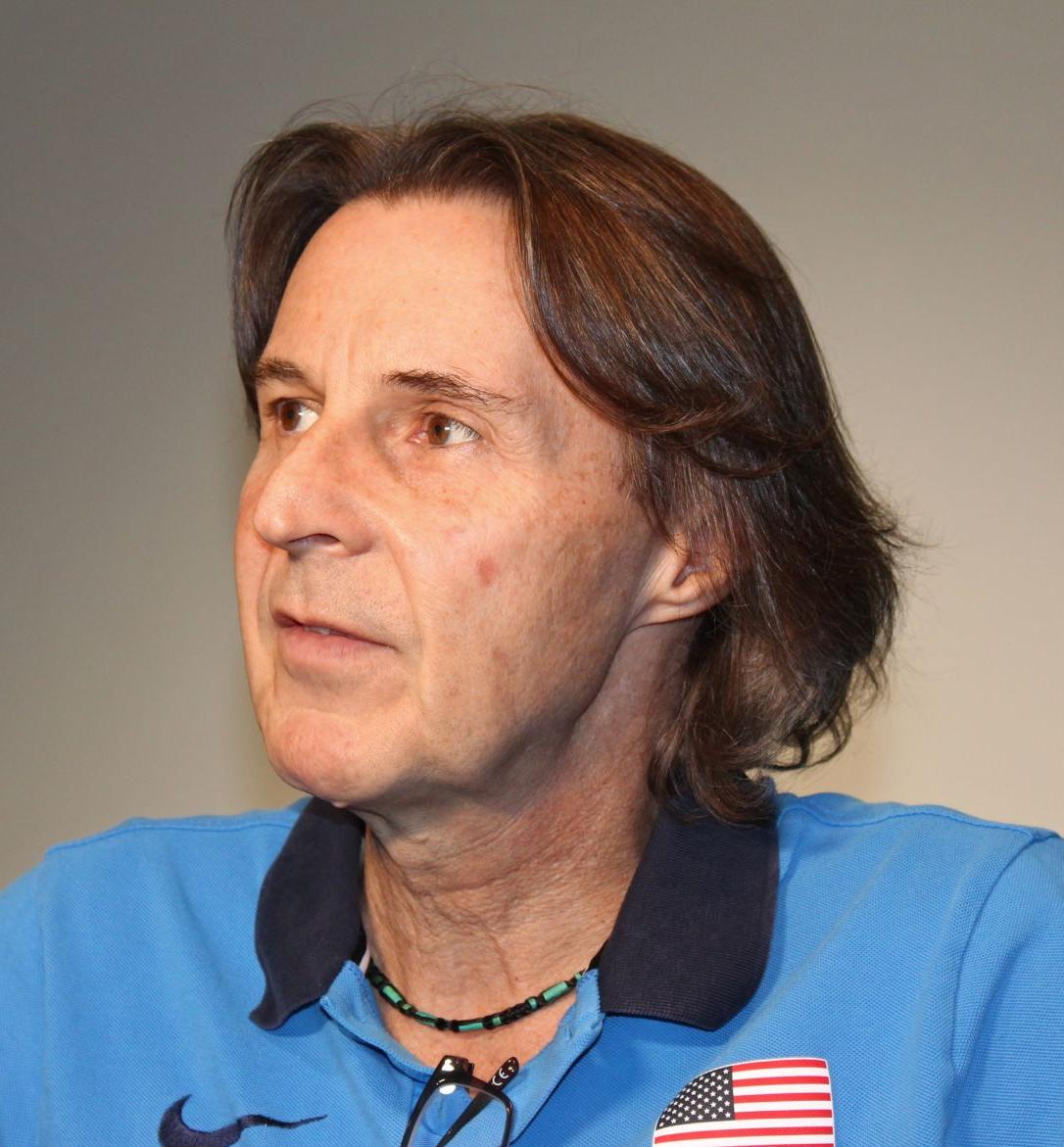 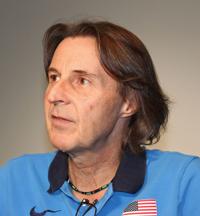 SMYRNA — The first results of independent air testing around the Sterigenics plant in Cobb County are a mixed bag with almost 80 percent of air samples showing no detectable levels of ethylene oxide, but others metering concentrations up to 395 times higher than what federal regulators deem acceptable.

More testing will occur when the plant is fully operating in early October, once construction workers have installed better emissions capture and control systems on site. Until then operations at the plant have been suspended.

Ethylene oxide is a carcinogen used in gas form to sterilize medical devices and equipment at the Sterigenics plant off Atlanta Road, generating concern about whether it’s causing cancers or other health problems in those who live and work nearby.

Results of the first three days’ testing by GHD, a company hired by the Cobb County, Smyrna and Atlanta governments to independently test and analyze ethylene oxide concentrations around the Sterigenics plant, were shared Monday at a meeting in Smyrna of concerned citizens, local leaders and environmental and health experts.

GHD showed the results of its air sampling at 25 different locations within several miles of the Sterigenics facility collected over three 24-hour periods between Sept. 3 and Sept. 5, when the sterilization plant was not in operation and no ethylene oxide was being emitted from the facility.

Of the 75 samples collected, about 60 showed no detectable level of ethylene oxide, meaning the concentration of the chemical in the air was less than 0.040 parts per billion, which is the minimum level that can be detected by laboratory instruments.

To put this into context, 0.040 parts per billion is the equivalent of a fraction of a drop of water in an Olympic sized swimming pool.

The U.S. Environmental Protection Agency reports that 0.02 micrograms per cubic meter is the level of ethylene oxide in the air that over many years could cause 100 additional cases of cancer per one million people. This is considered the baseline acceptable exposure level.

On the first day of GHD testing, six sample locations showed much higher levels of ethylene oxide, the most extreme being 4.4 parts per billion or 7.9 micrograms per cubic meter — 395 times the 0.02 threshold. 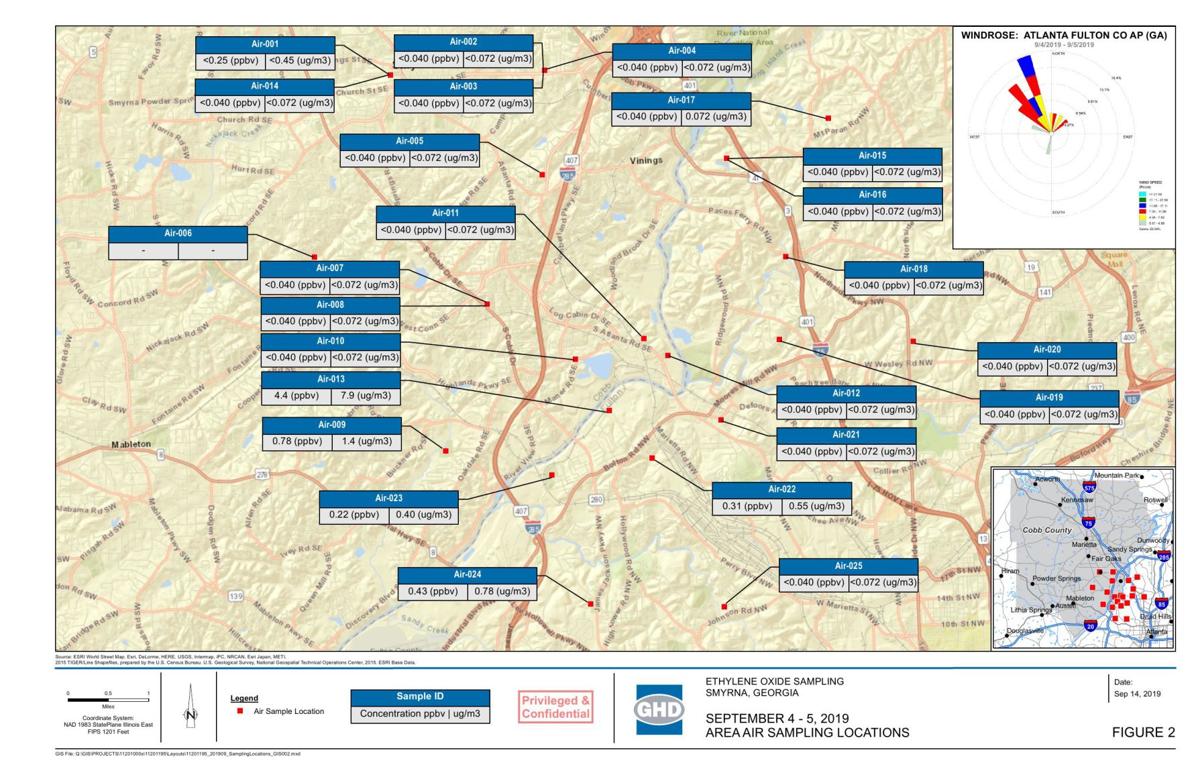 That sample was taken near the Sterigenics site, close to the Cobb and Fulton county border, just above Bolton Road.

On the second day of testing, 10 of the 25 sample locations showed detectable levels of ethylene oxide, ranging from 0.21 to 3.6 micrograms per cubic meter. 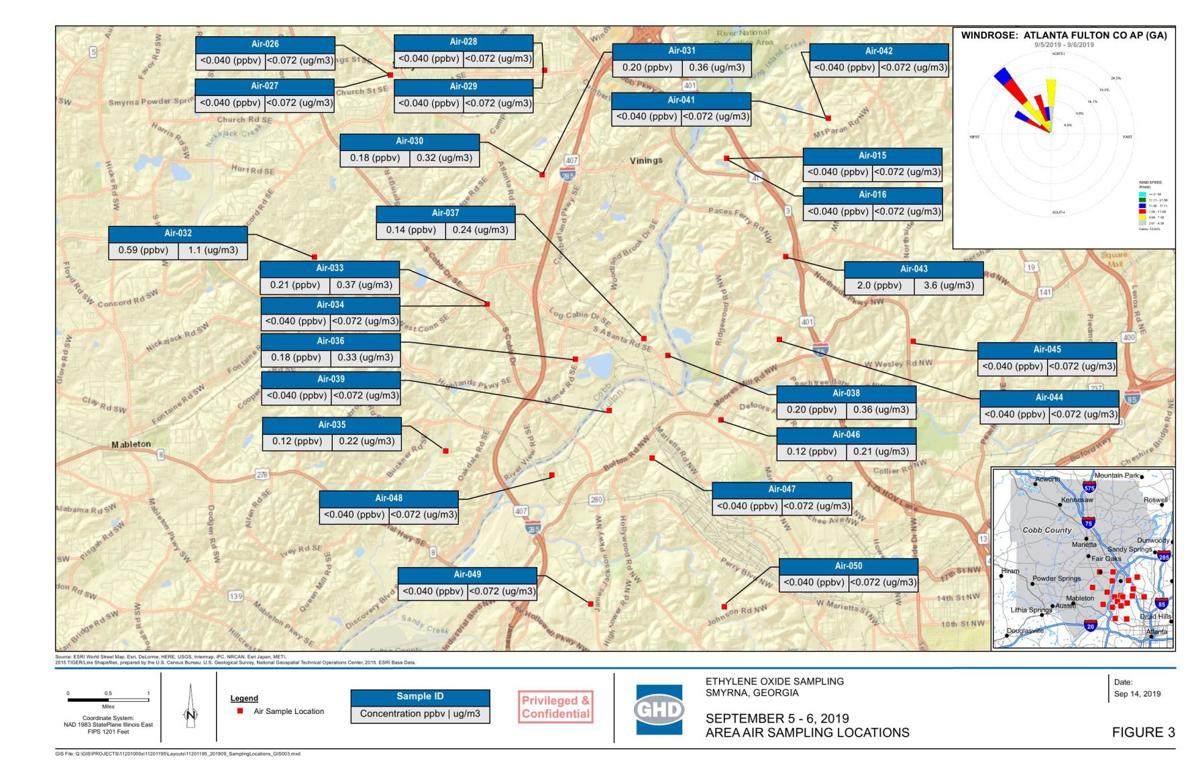 The third day of testing showed detectable ethylene oxide at five locations, ranging from 0.086 to 0.37 micrograms per cubic meter. 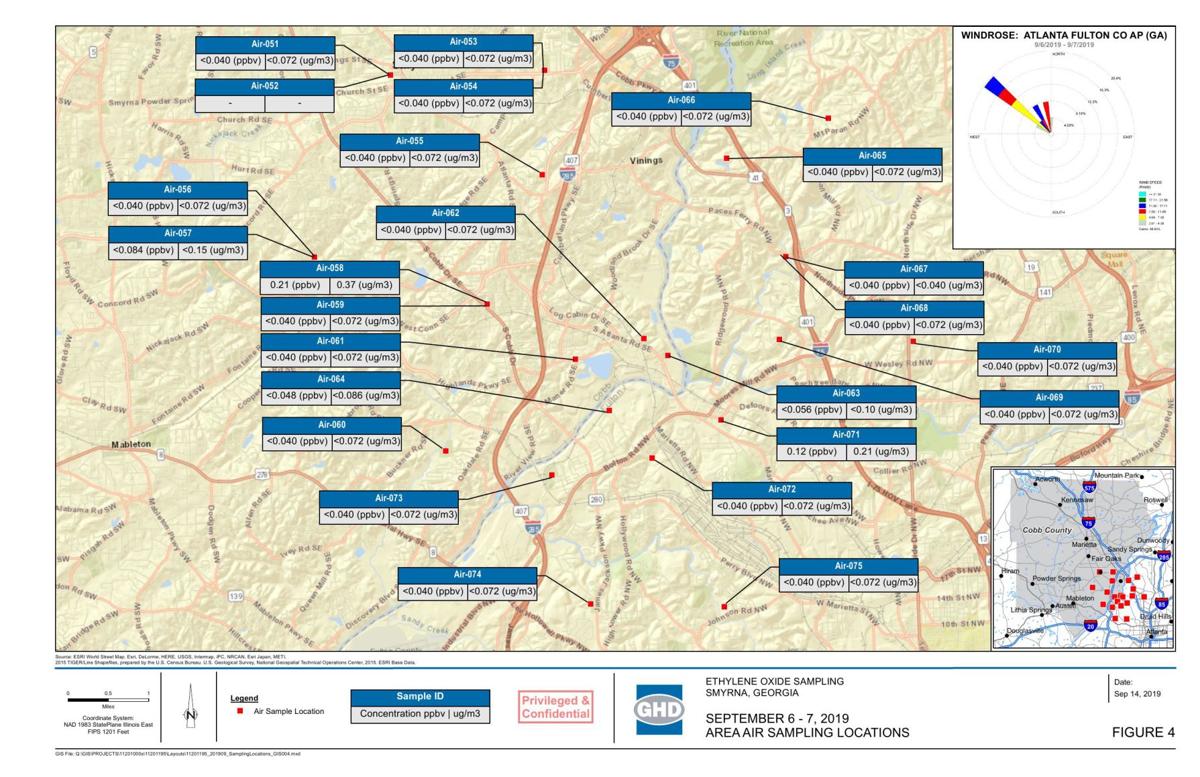 GHD staff explained the results at a public meeting Monday of the Air-Quality Oversight Committee set up by Smyrna Mayor Max Bacon to oversee the independent testing.

They said to date there has been nowhere near enough data collected to conclusively determine the levels of ethylene oxide around the Sterigenics plant and whether they are harmful, let alone whether the plant itself is solely responsible for the concentrations.

More air sampling will be collected by GHD in October when the plant is back in operation.

Dyron Hamlin, a professional chemical engineer and principal at GHD, told the meeting that the preliminary air sampling results show a base level of ethylene oxide in the air around the plant, which can be used for comparison with the results of testing done while the facility is operating and emitting the chemical.

“This is a very small snapshot of what these levels are over a short period,” Hamlin said, adding that the levels are similar to what has been detected in ambient air samples around the United States, both near facilities using ethylene oxide and in areas where no known source of the chemical are.

“It’s very difficult for me to make any kind of specific conclusions on the basis of this data,” Hamlin said.

An ambient air sample taken in June by the Georgia Environmental Protection Division at its monitoring location in south DeKalb County, where there is no known source of ethylene oxide, showed a concentration of the chemical in the air of 0.31 micrograms per cubic meter.

Lucy Frasier, a toxicologist working with GHD to analyze their air testing, told those at the meeting the data to date is not cause for alarm in terms of health.

She said concentrations of ethylene oxide in the range of two to five micrograms per cubic meter of air are “insignificant” to health and even those ten times higher than that would not significantly increase cancer risks.

Frasier said results of the air samples collected by GHD over 24 hours on several days cannot be compared to the EPA’s threshold for cancer risk, as that relates to long-term exposure.

To compare the two would mean assuming the concentrations in the initial GHD sampling were consistent every day of the year, she said.

“We just don’t have anywhere close to the data that would be needed,” she said.

Concerned citizens at the meeting included Emyrs Treasure, a Riverside resident whose home is just over a mile from the Sterigenics plant, and Tony Adams, who lives about three quarters of a mile from the facility in the Atlanta part of Cobb County.

They were unhappy with the committee’s lack of advertising for its public meeting and hope to see more transparency from all involved in this issue, including local civic leaders, Sterigenics staff and the Georgia EPD.

Treasure and Adams questioned why GHD didn’t sample air directly outside the plant in their initial testing, as well as Sterigenics’ likelihood of reporting truthfully whether it is operating at full capacity once sterilization there resumes, so testing can accurately reflect ethylene oxide concentrations when the facility is in full swing.

“At least we have something now that resembles a baseline,” Treasure said of Monday’s results, adding a “huge opportunity” was missed to take air samples around the plant when it was operating fully before closing on Aug. 26 to improve emissions capture and control.

“In a perfect world we would get 24-hour, round-the-clock monitoring, but who’s paying for that?” Adams said.

“They said 80 percent of the testing came back as non-detected, but the 20 percent of the results don’t look good,” Allen told the MDJ. “There needs to be some more contextualization.”

In January 2020, the DeKalb County School District (DCSD) will open a replacement for Austin Elementary. In August 2020, the district will ope…

As expected, the two crowded races in the Sept. 17 special election are heading to runoffs.