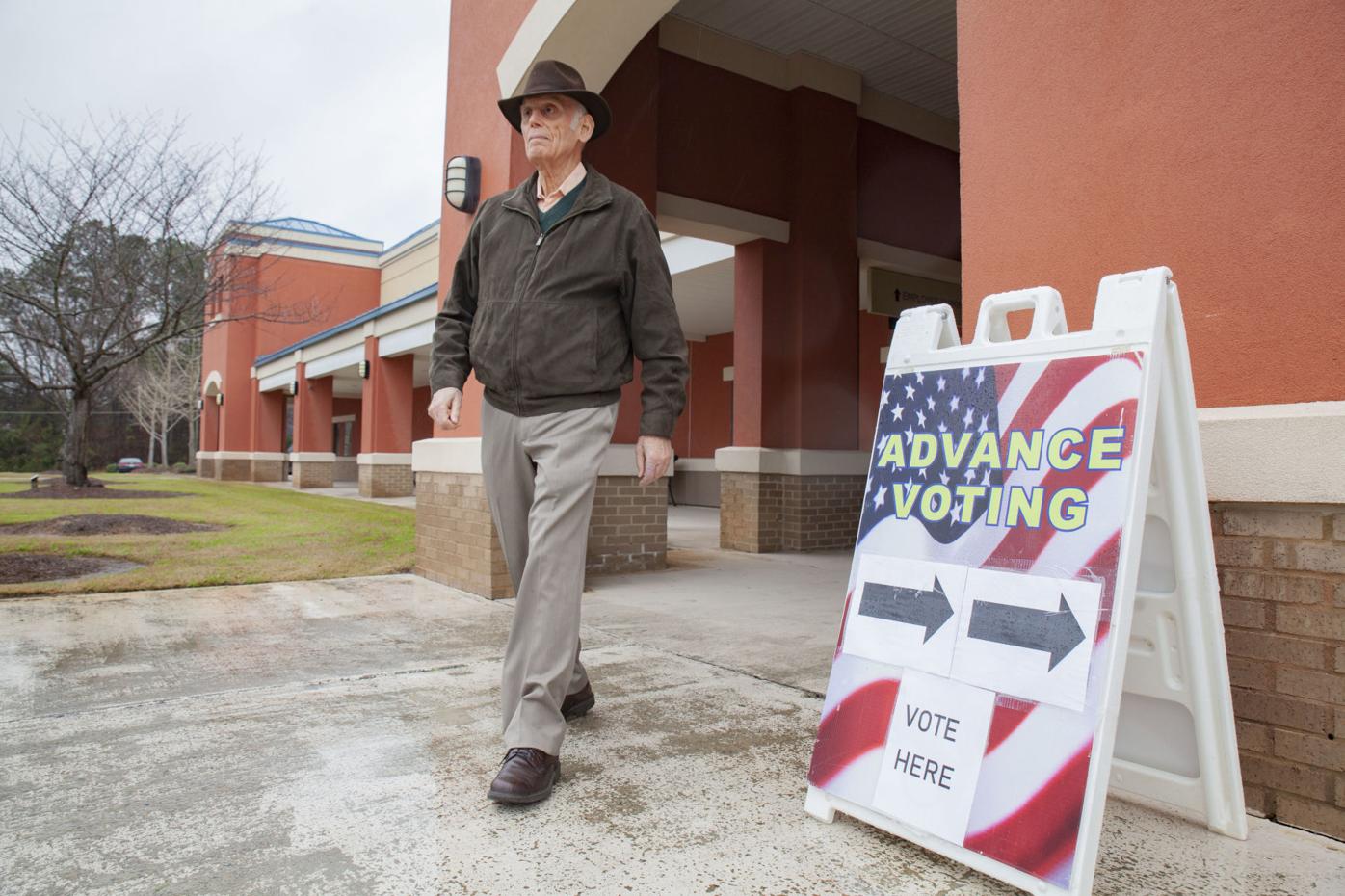 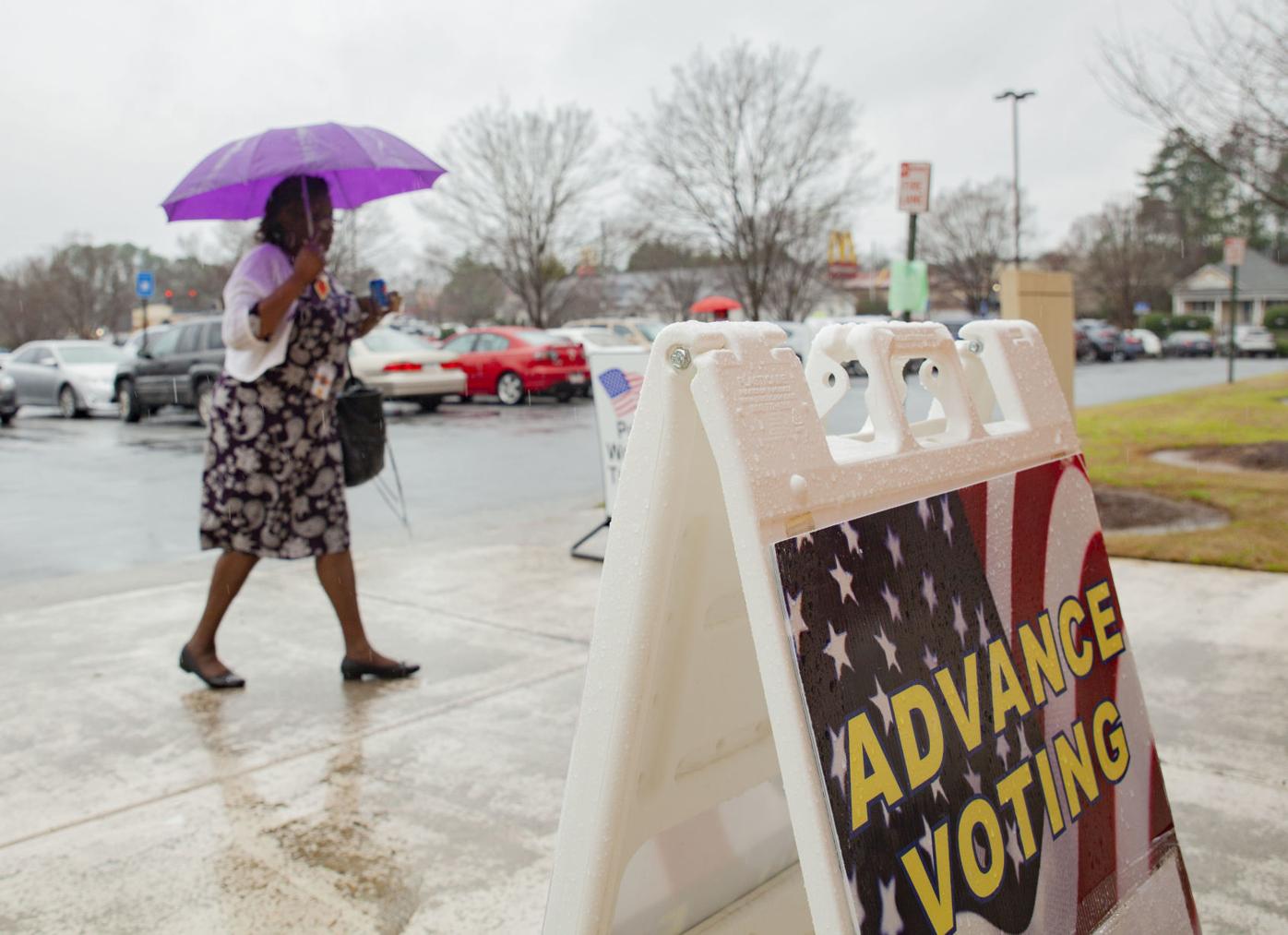 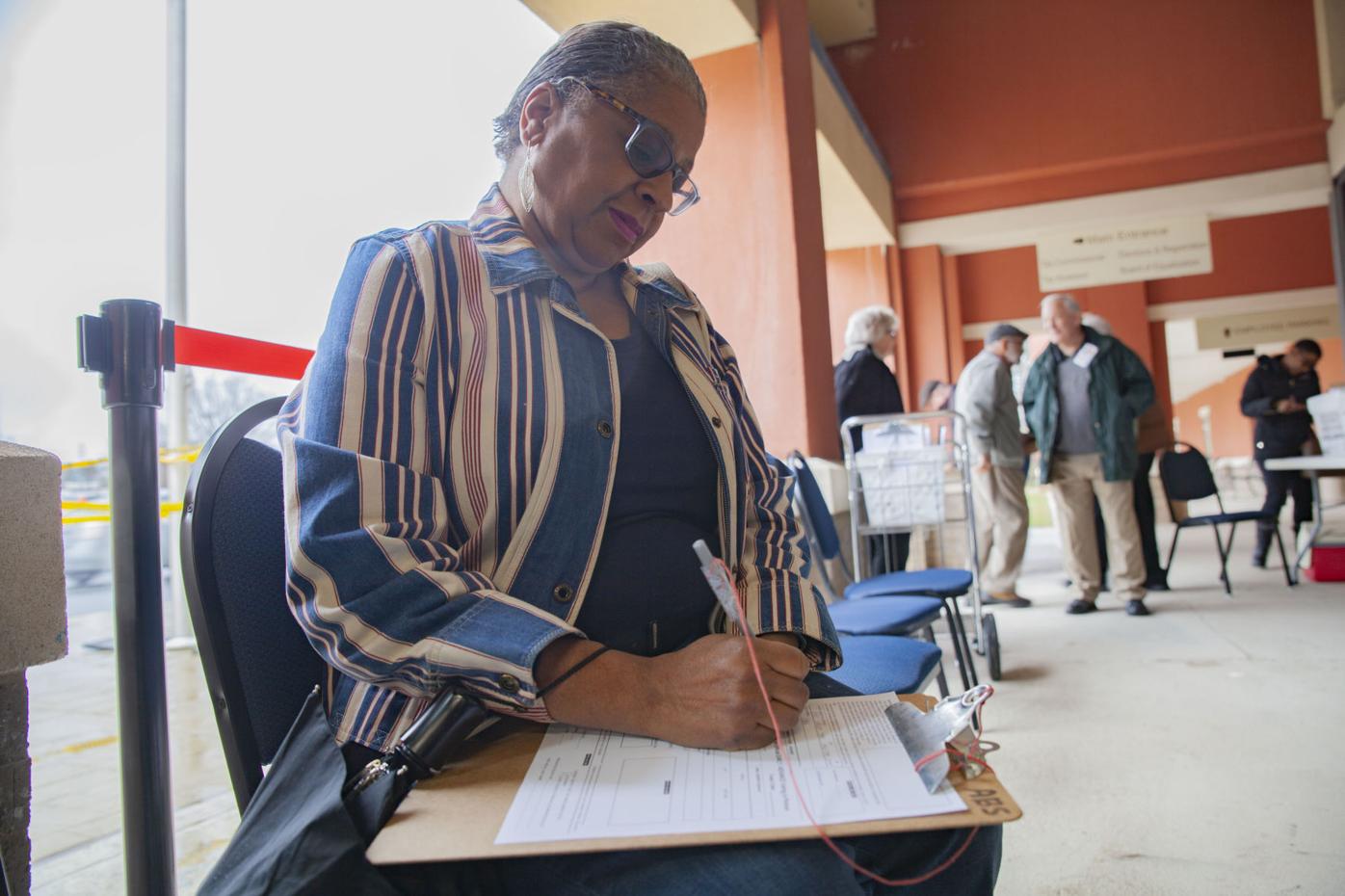 Renee Wade, a Marietta resident, fills out a form before heading into vote at the main Cobb elections office on Whitlock Avenue in Marietta. Advance voting in the March 24 presidential primary began on a rainy Monday morning. Advance voting continues through March 20. 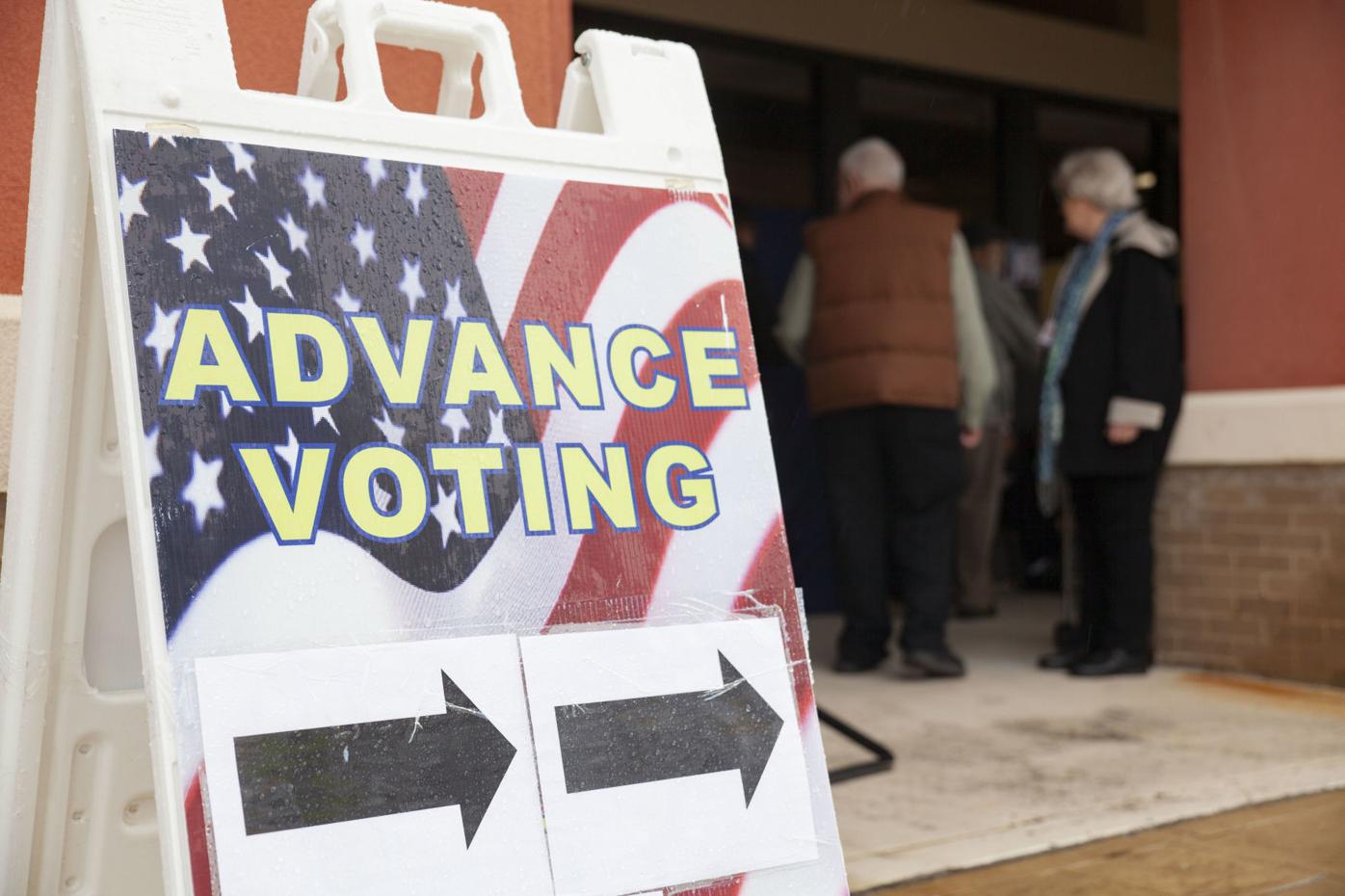 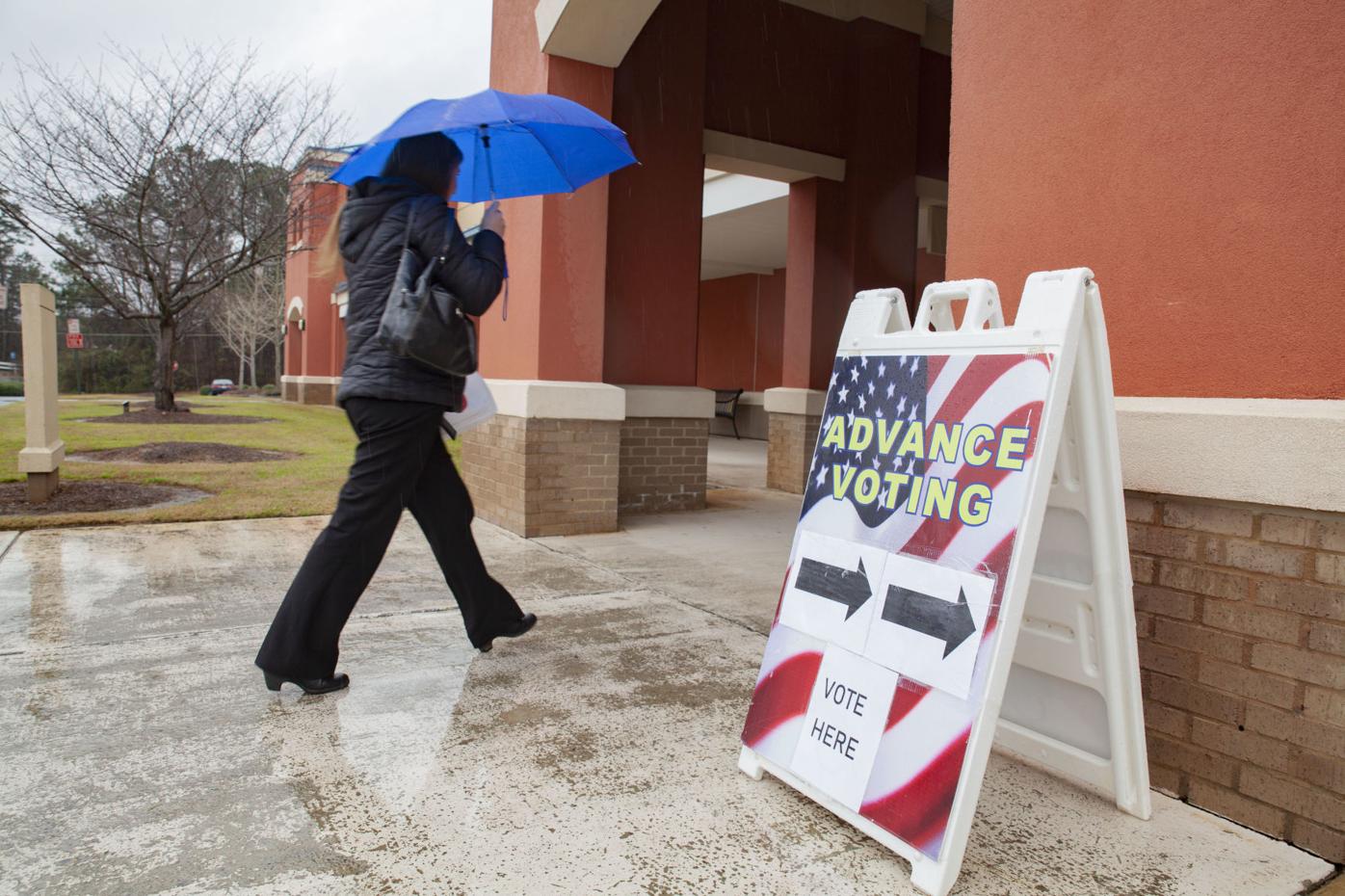 Renee Wade, a Marietta resident, fills out a form before heading into vote at the main Cobb elections office on Whitlock Avenue in Marietta. Advance voting in the March 24 presidential primary began on a rainy Monday morning. Advance voting continues through March 20.

MARIETTA — Polls opened on a rainy Monday for advance voting in the March 24 presidential primary, and elections officials say turnout has been heavier than previous elections.

“Compared to 2016, there have already been more voters just at our main office than there were at the three locations open on the first day in 2016,” said Janine Eveler, director of Cobb Elections and Voter Registration. “That’s not even counting the voters at the Senior Wellness Center today, as I am still waiting for those totals.”

The elections director said Monday afternoon that though the flow of voters remained steady, despite rain throughout the day, neither voting location saw more than about a 15-minute wait time most of the day.

She added that the rain does tend to put a damper on the number of ballots cast in a given day, but “if people have a particular day that they planned on voting, they usually just come anyway.”

On the first day of the 2016 presidential primary Cobb saw 217 votes at the main office, 78 at Switzer Library and 91 at Wellness Center, totaling 386, she said.

As the field of presidential candidates continues to narrow — South Bend, Indiana Mayor Pete Buttigieg and Minnesota Sen. Amy Klobuchar most recently announced they are dropping out of the race for the Democratic nomination — Eveler said she expects even more voters to come to the polls in coming days.

This election also marks the first time the state’s new voting machines are being fully put to the test, though 21 machines were deployed to be piloted in last year’s elections in November.

The new machines, which look like giant tablets, allow voters to make their selections on a modern touchscreen device and print reviewable sheets of paper with a bar code and names of the voter’s selected candidates. That piece of paper is then fed into a scanner for tallying.

Eveler said there are 48 machines available between the two locations open for voting now.

Eight more locations will be open March 16 to March 20, and half of those locations, like the first two, will offer Saturday voting.

Those eight locations will bring the total available voting machines to 150. Election Day will see more than 1,800 machines available across all the county’s voting precinct locations, according to Eveler.

She also said more machines are on their way to the county and will be available by elections in May.

Eveler said the new voting system hasn’t caused any significant delays, but there has been a slight learning curve for some voters. She said news coverage on the new machines and videos showing how they work have helped some people avoid issues.

“We have a lot of poll workers here to assist, but it looks like people are not having any trouble figuring it out,” she said.

“I was in and out within a couple minutes,” said Trinity Olmstead, a 19-year-old Kennesaw resident, who said this election was his first in Georgia and the first presidential election in which he’s been old enough to vote. “I’m from Kentucky. It was different. ... In Kentucky, they have the actual hand-marked, where you get the pencil and bubble in, so this was different, but it was pretty easy.”

Olmstead said as a young voter, he’s grown up with touchscreen technology, and said voting on a touchscreen machine might come more naturally to him than an older voter.

Olmstead, a Kennesaw State University freshman and political science major, said he’d voted for Vermont Sen. Bernie Sanders because, as a college student, “when he talks about access to free college tuition, health care, stuff like that, that really interests me a lot.” Out of the remaining Democratic presidential candidates, Olmstead added “he’s the only one, I think, that has a chance of winning.”

Styles said she voted for former Vice President Joe Biden, because, though she liked other Democratic candidates’ campaign promises, she thought Biden’s were the most attainable. She also said she liked Biden’s health care plan and “his compassion for all people.”

Advance voting is open at the Cobb elections office at 736 Whitlock Avenue, Marietta, and the senior wellness center at 1150 Powder Springs St., Marietta.

Don't fill up gas tank unless you need to, experts urge. Panic buying or hoarding gas will make things worse.

Gas prices surging in SC, but hacked Colonial oil pipeline could be back online Friday

Pet of the Week: Davey