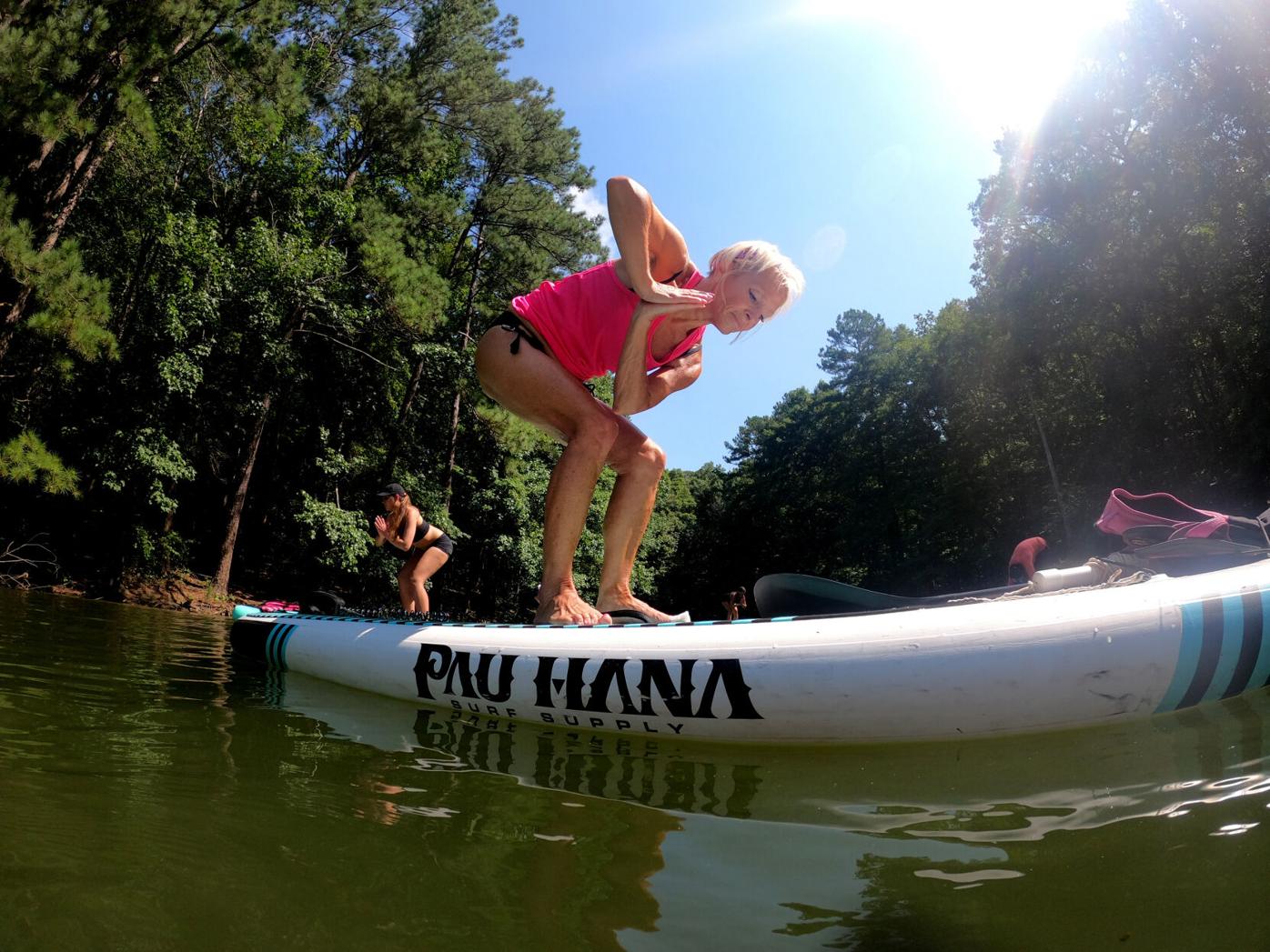 Kyla Nelson, a yoga student from Canton, stretches while balanced on a paddle board during a yoga session in a quiet cove in Lake Allatoona. 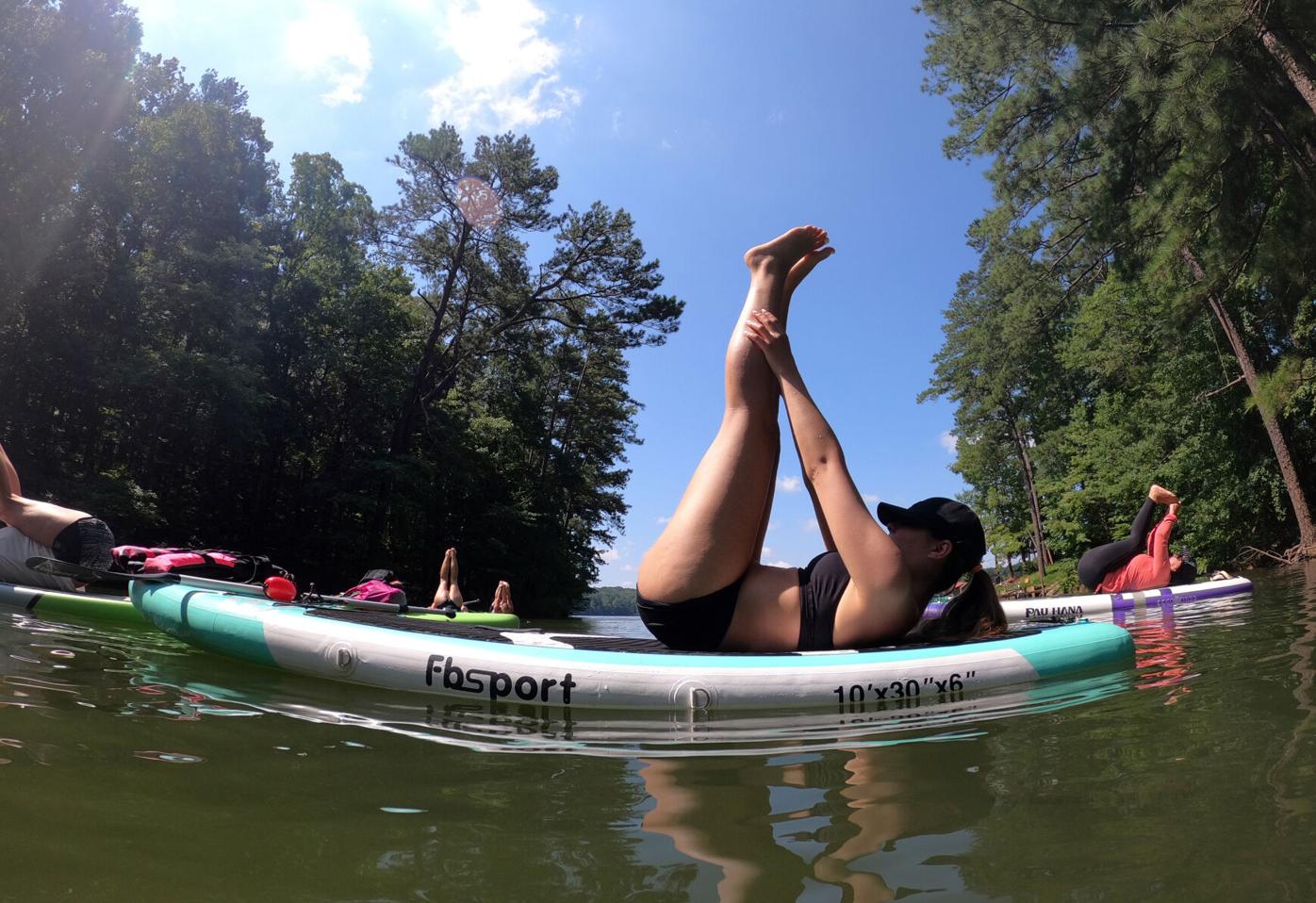 Malu Esteves, 27, from Kennesaw, stretches on her back during her first yoga practice on a paddle board. 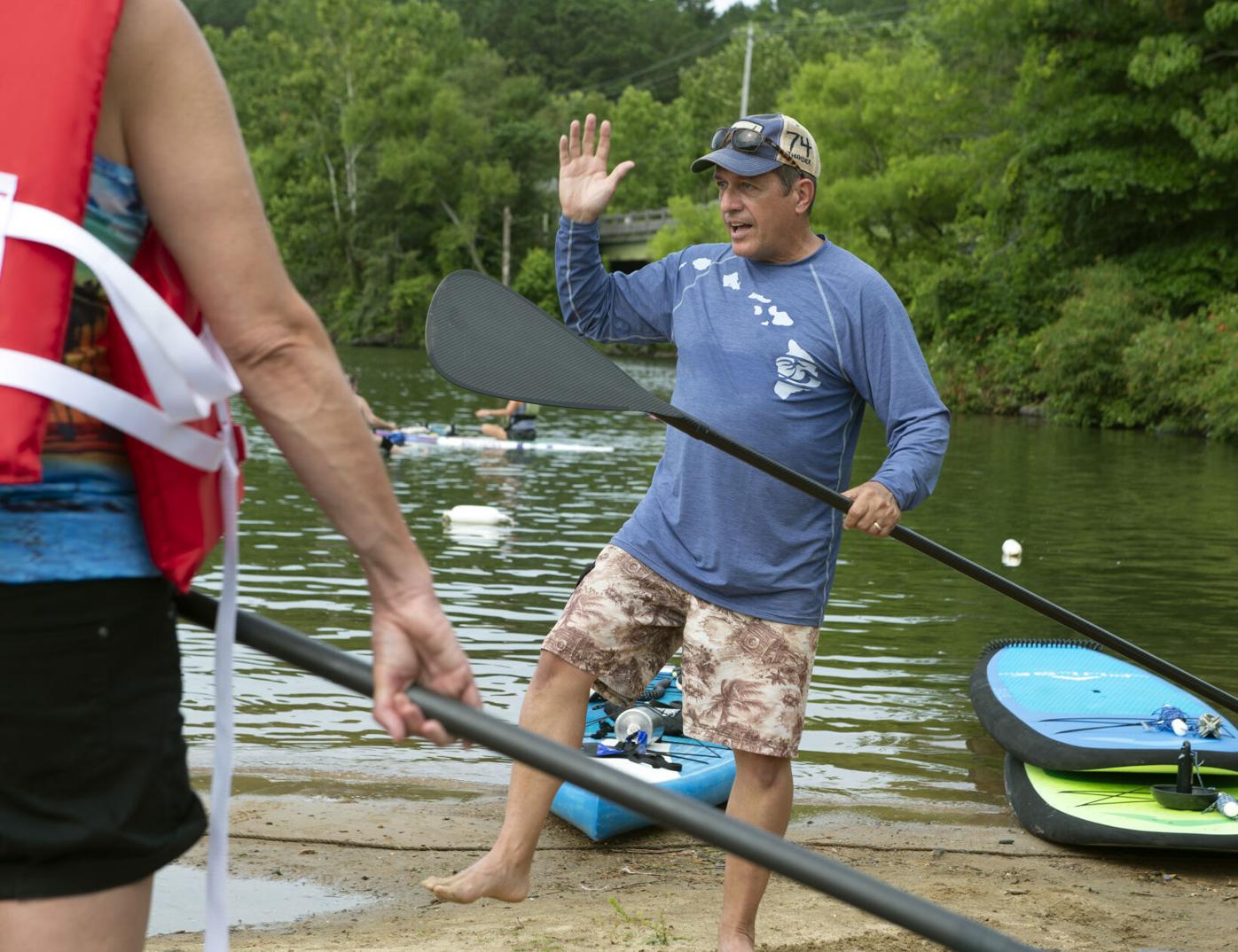 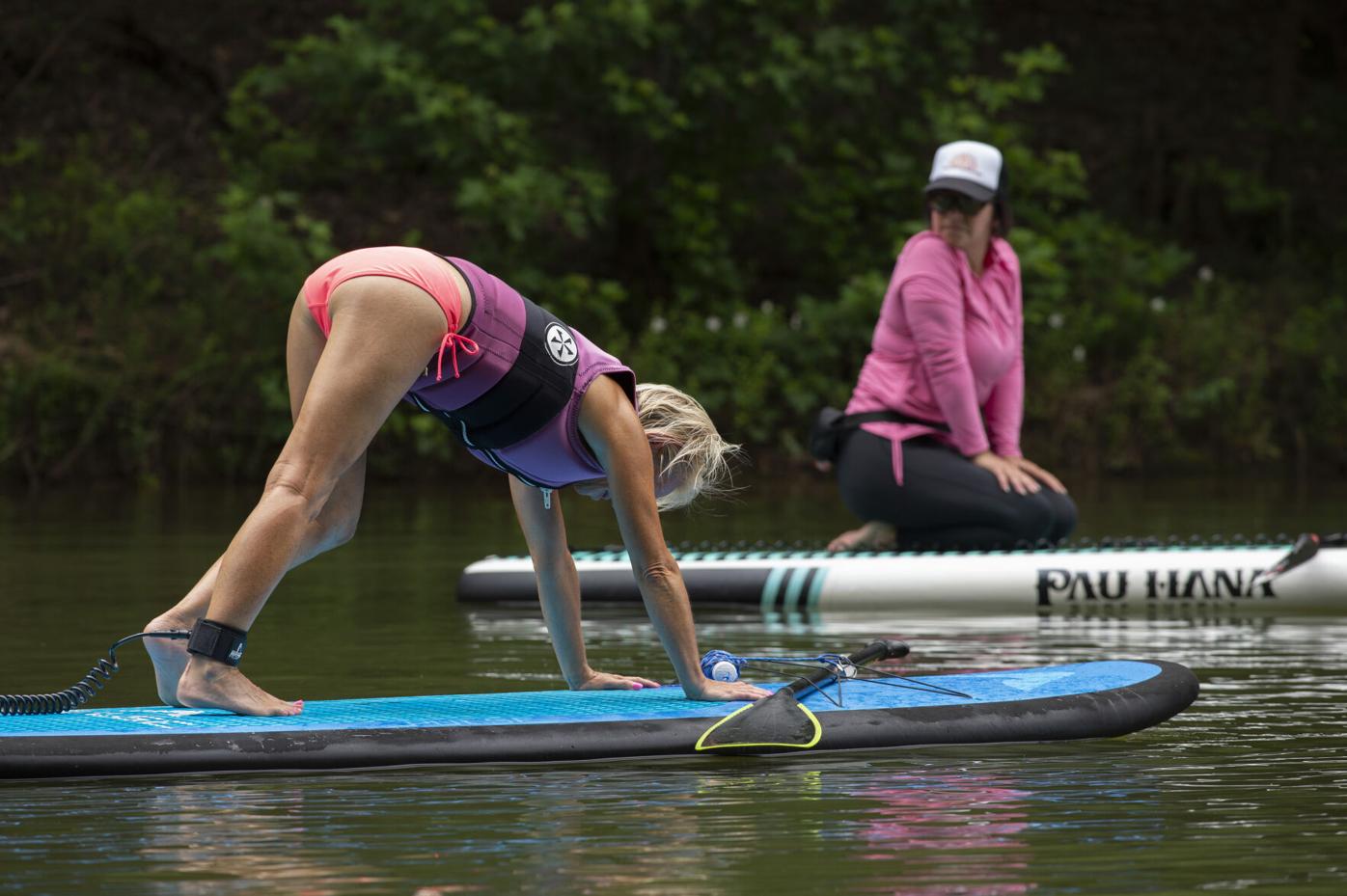 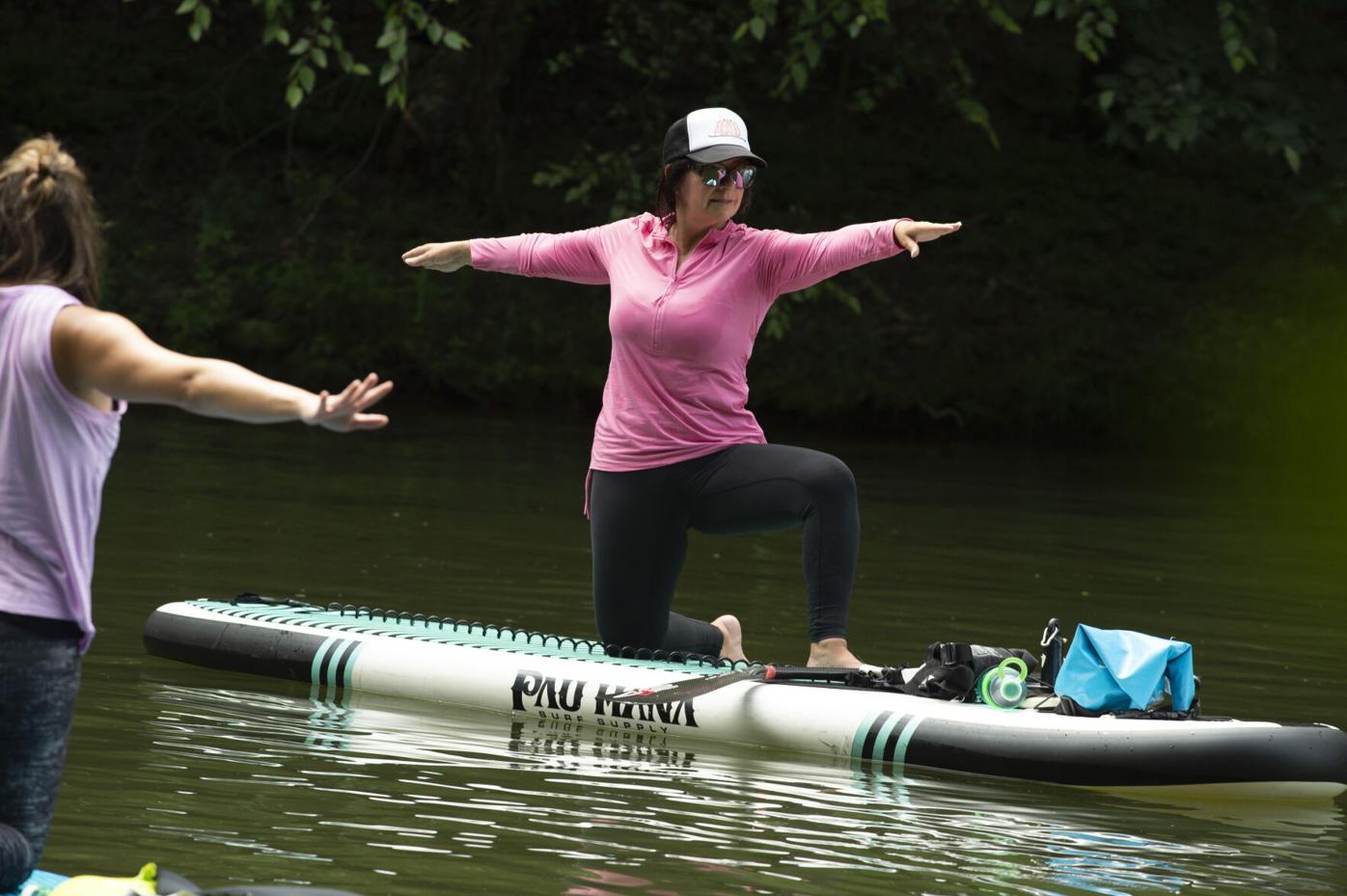 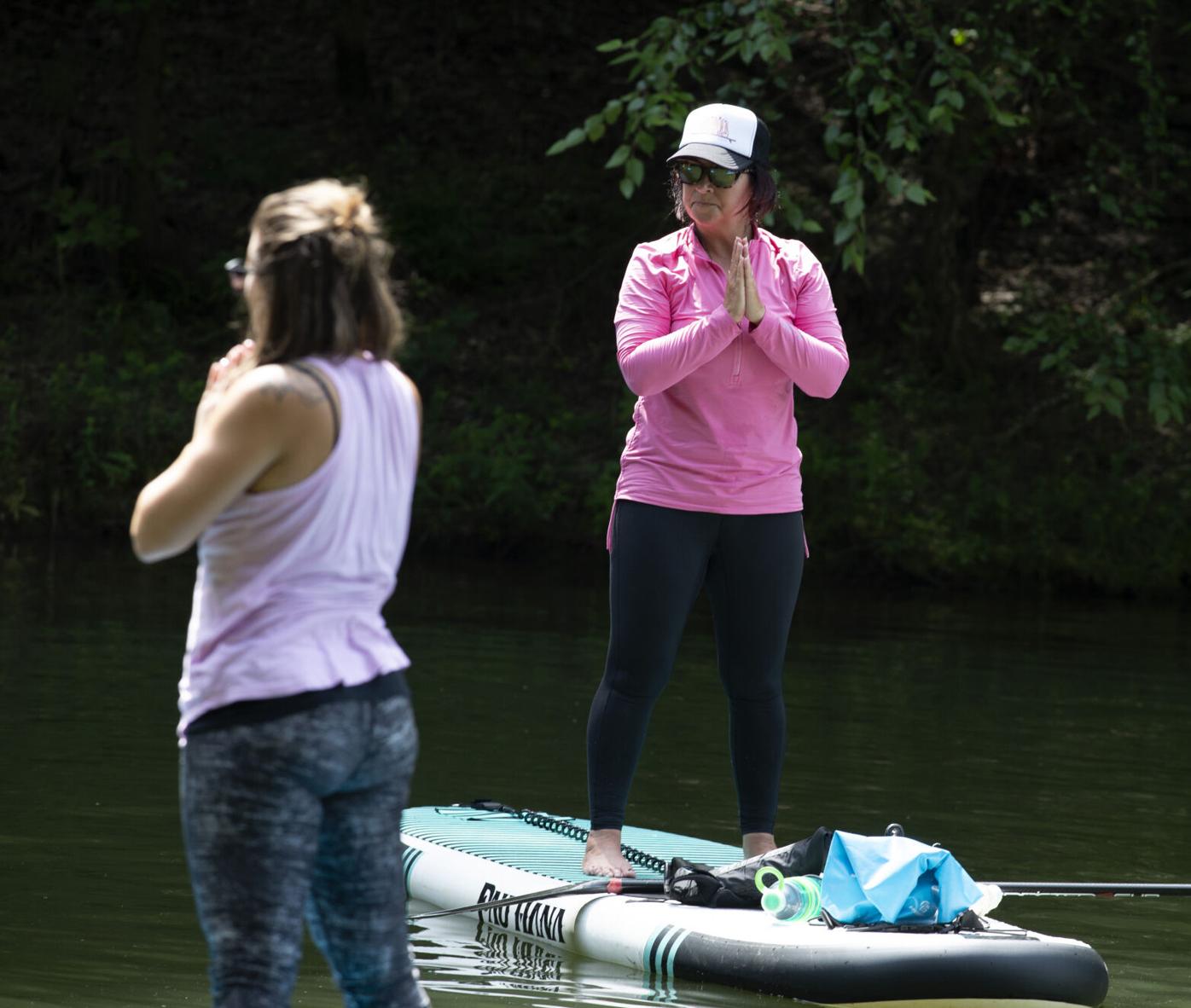 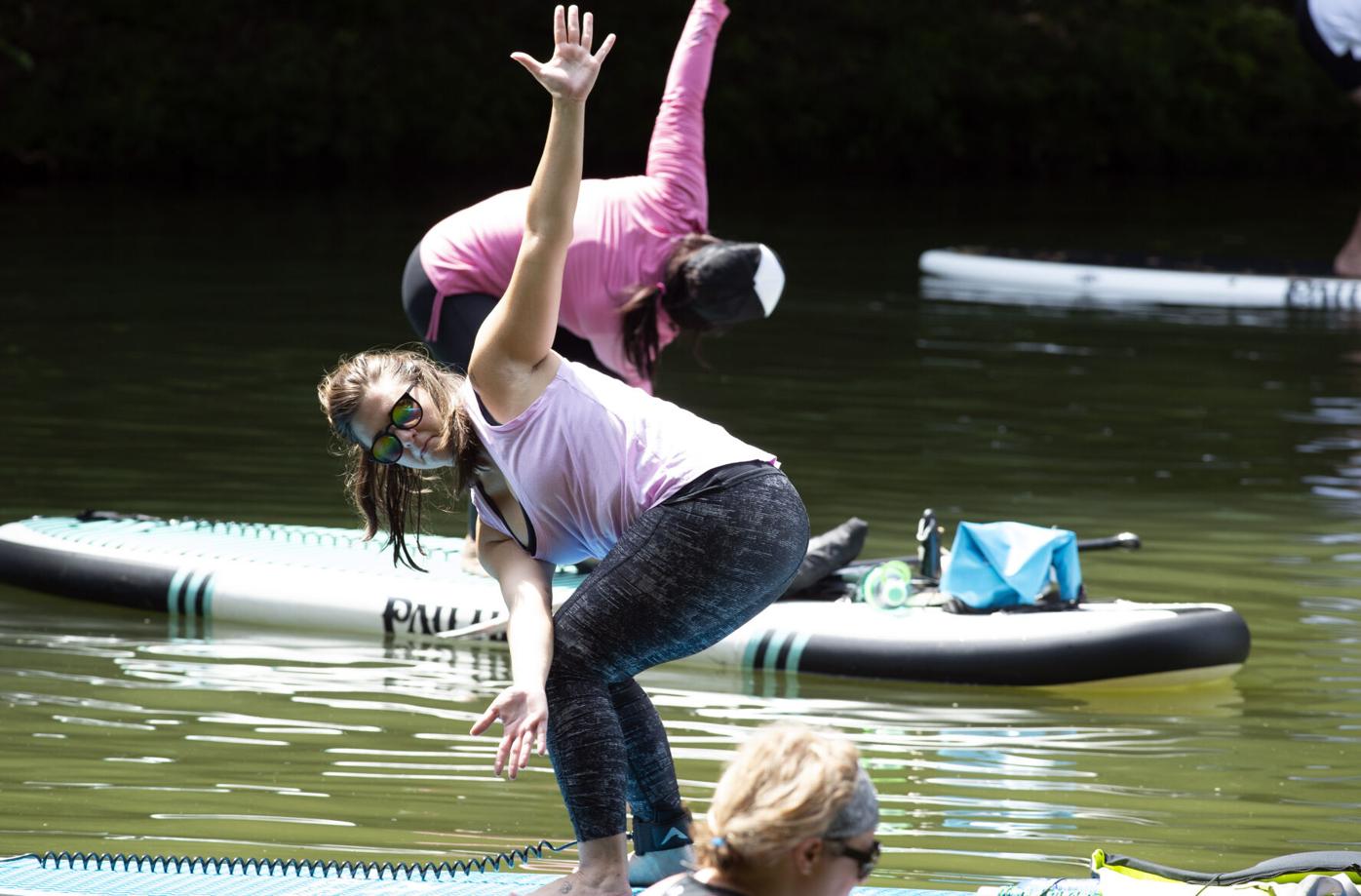 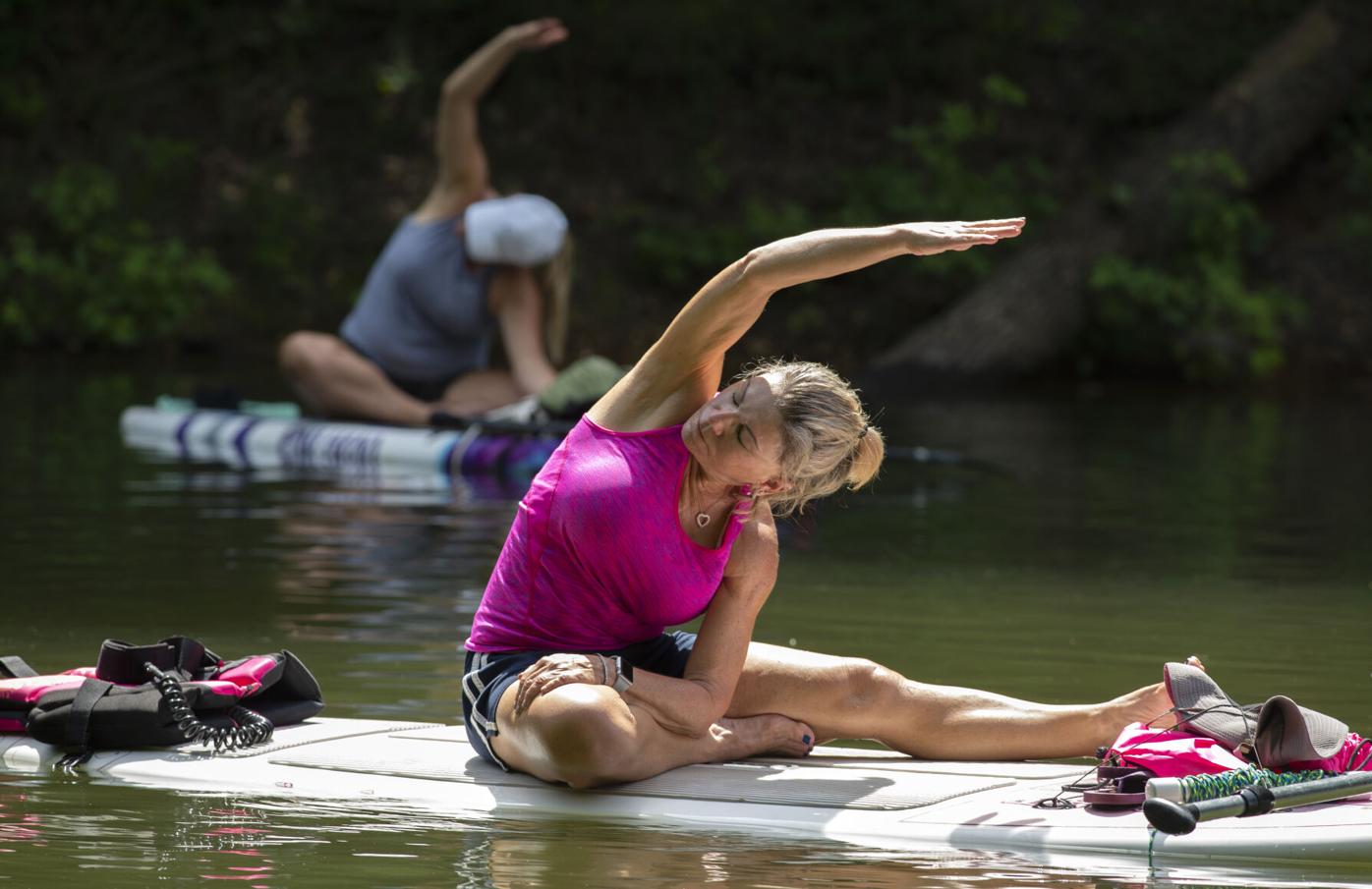 Yoga students stretch on a yoga pose during stand-up paddle board yoga class on Lake Allatoona. 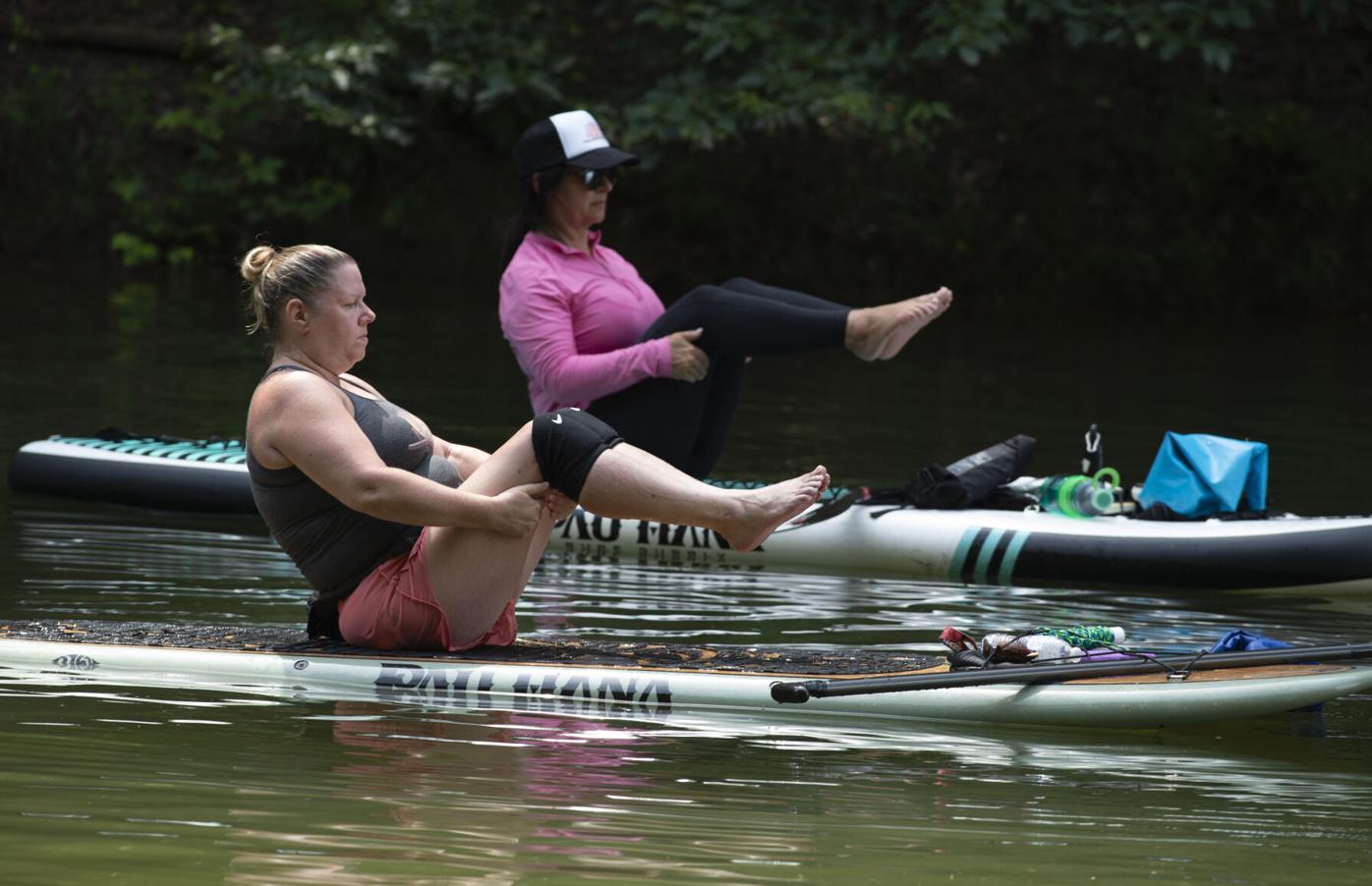 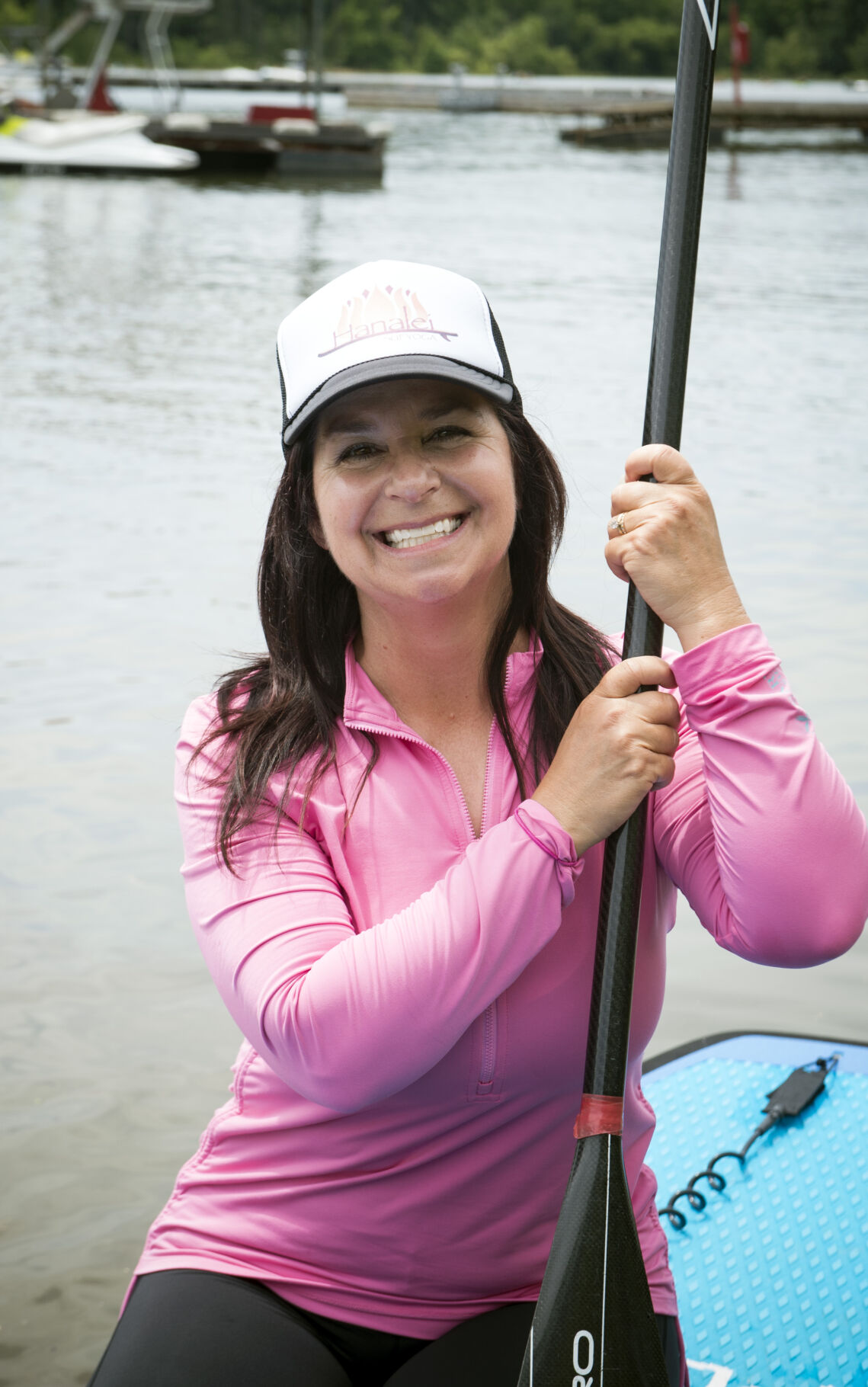 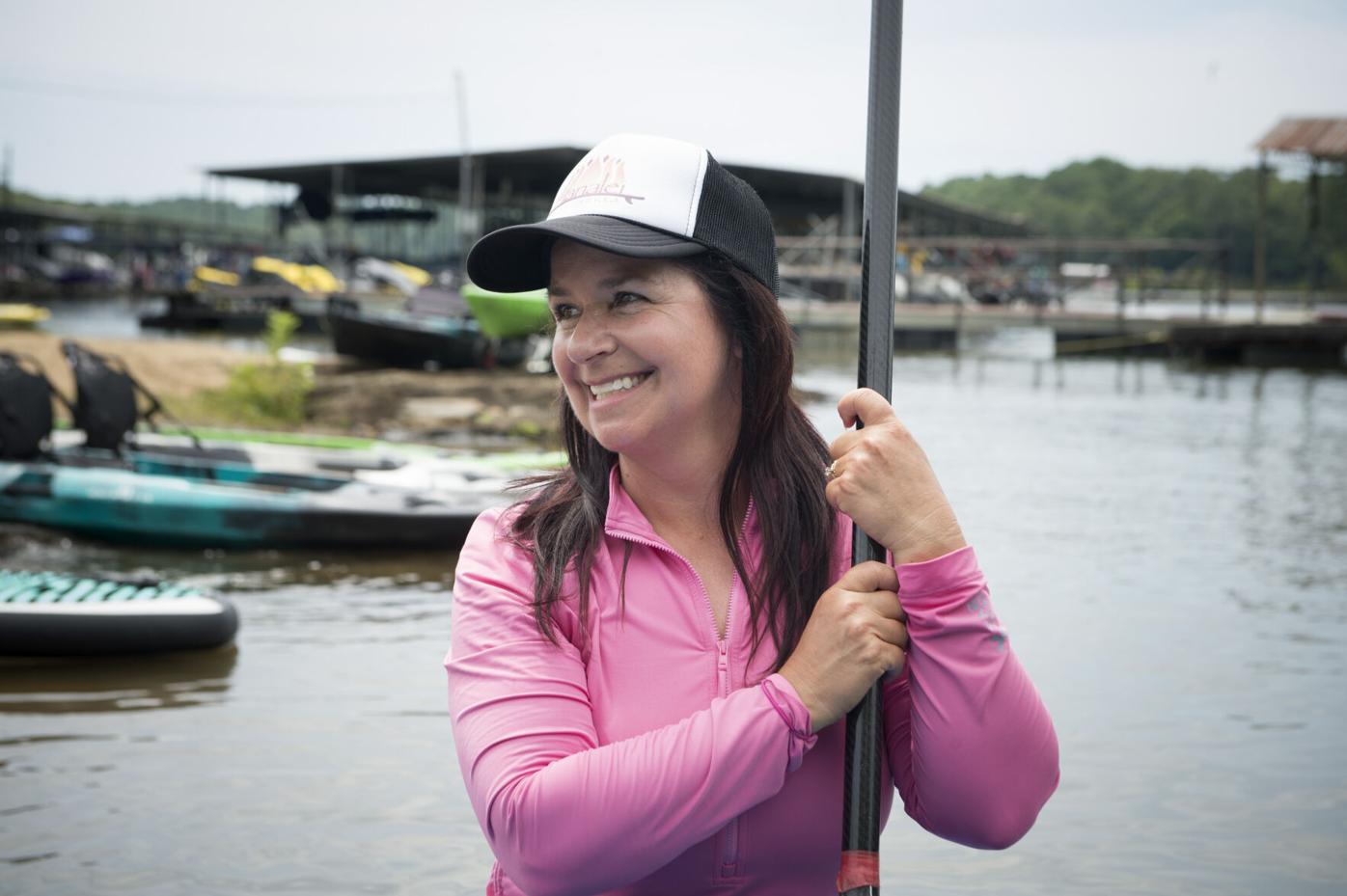 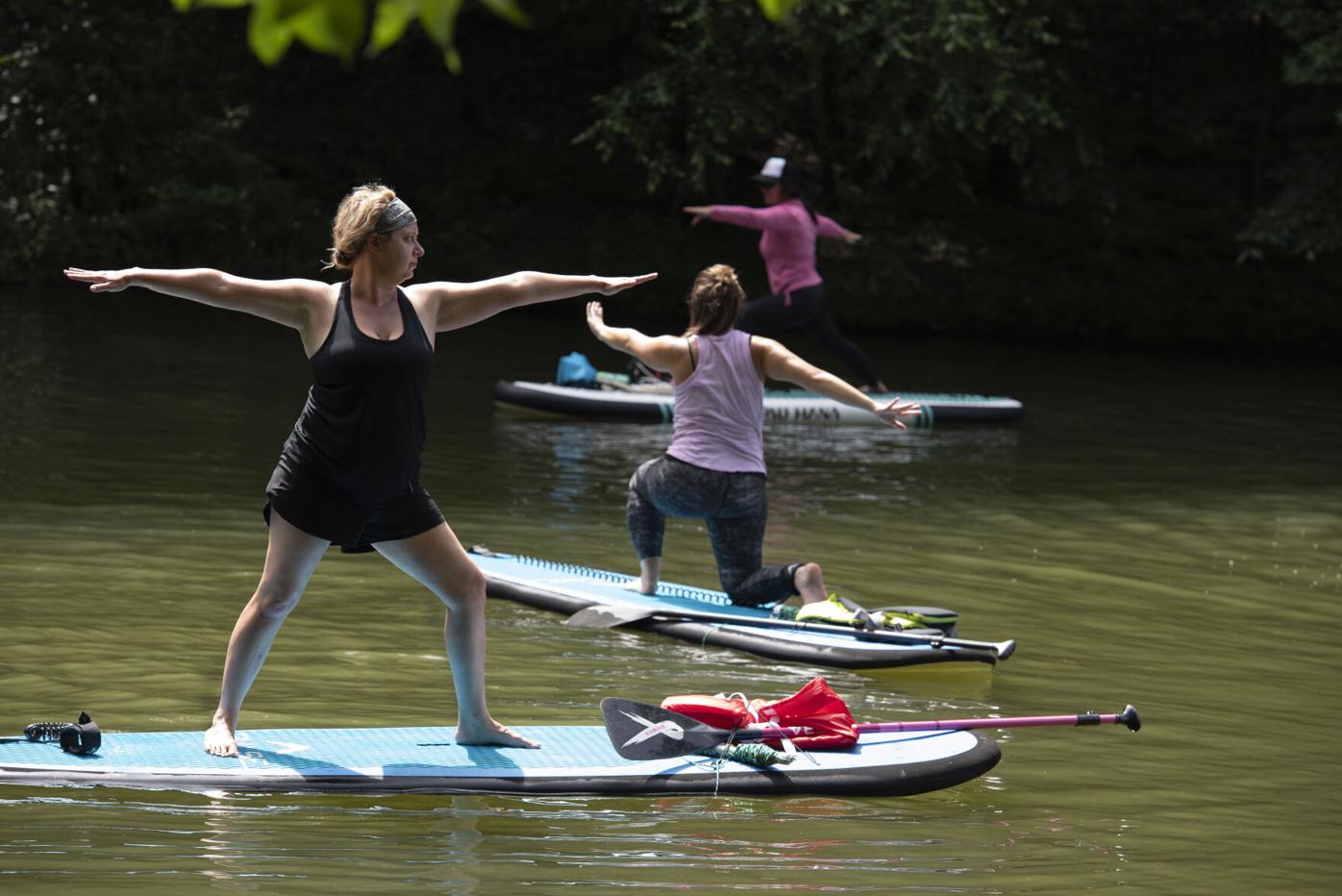 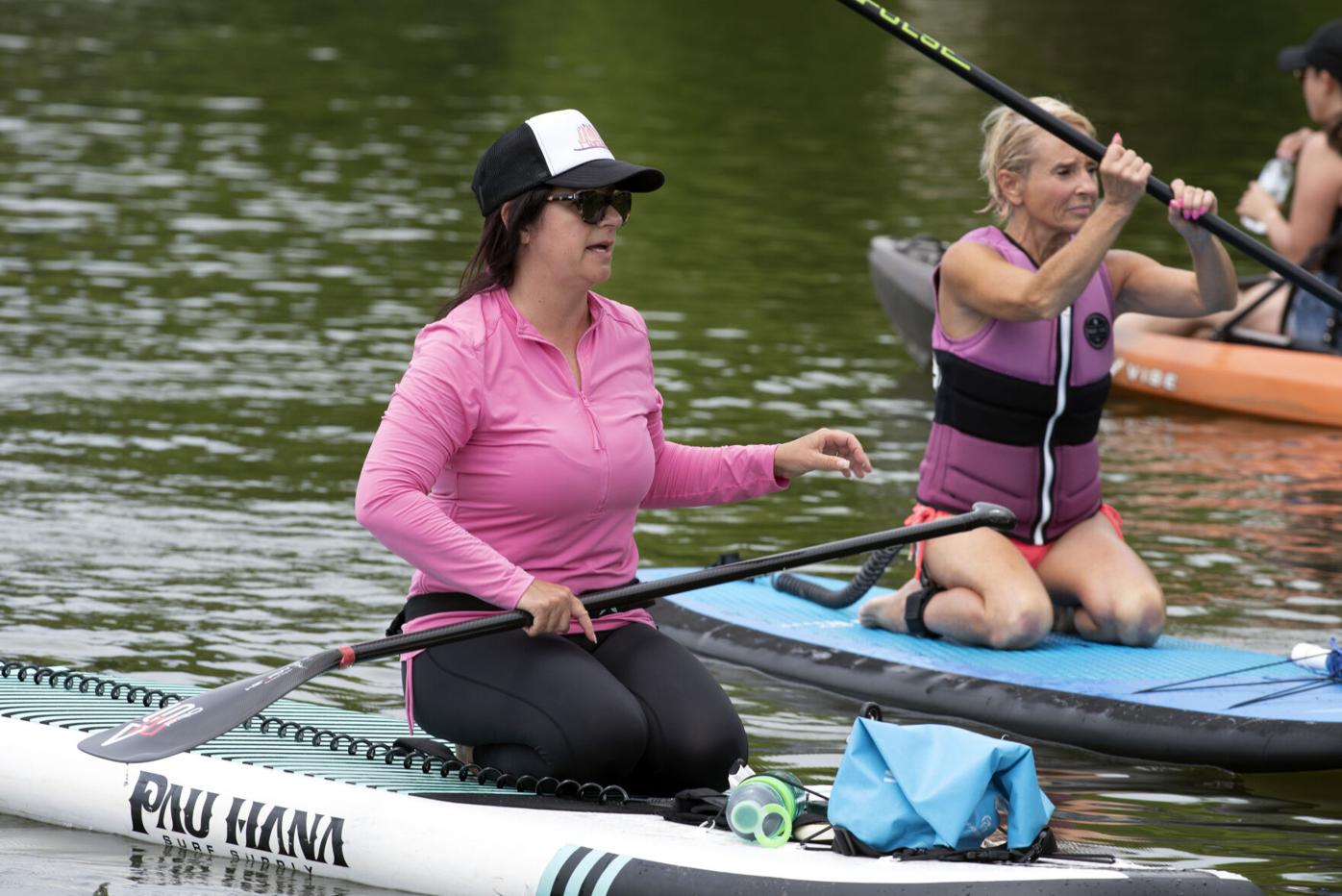 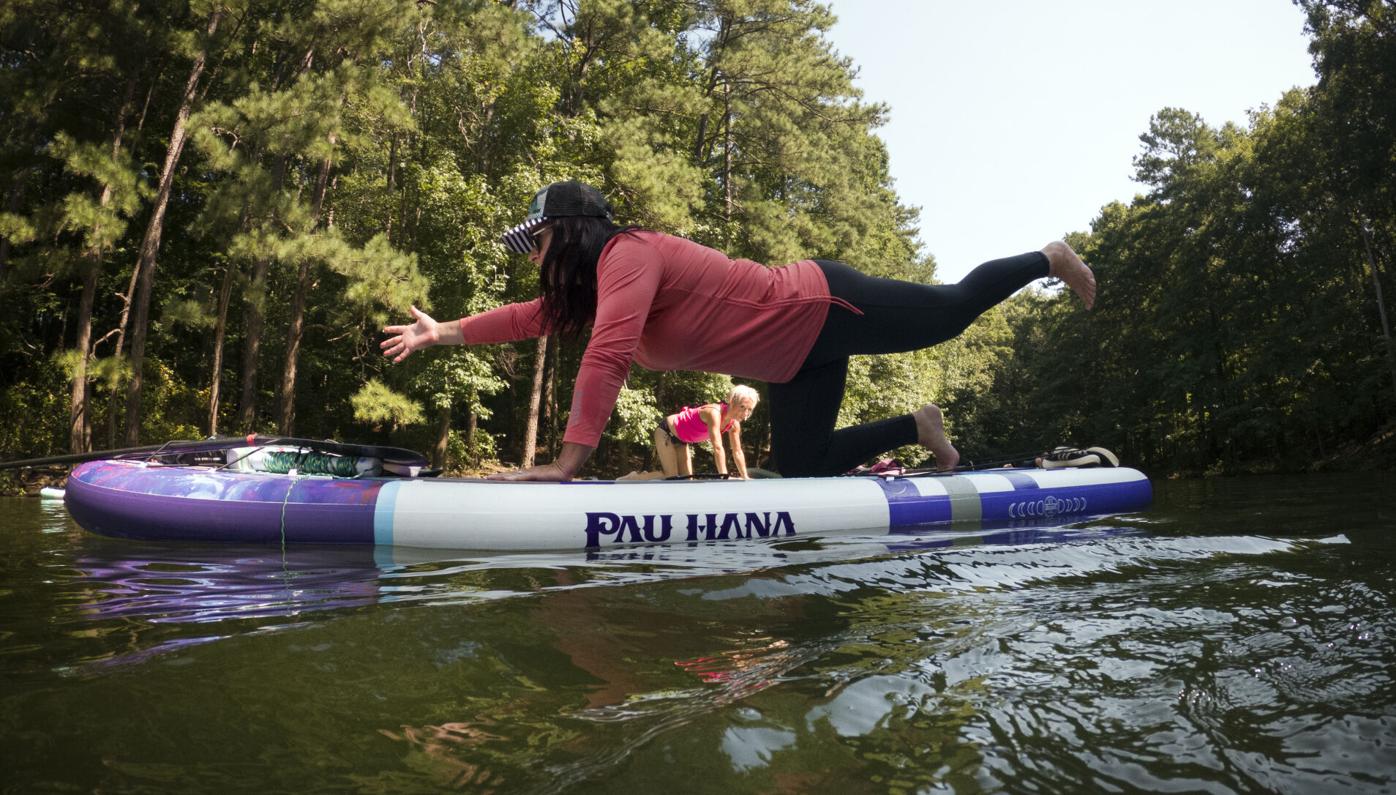 Kyla Nelson, a yoga student from Canton, stretches while balanced on a paddle board during a yoga session in a quiet cove in Lake Allatoona.

Malu Esteves, 27, from Kennesaw, stretches on her back during her first yoga practice on a paddle board.

Yoga students stretch on a yoga pose during stand-up paddle board yoga class on Lake Allatoona.

Gliding on colorful paddleboards, nine women made their way to a quiet cove on Lake Allatoona on a recent Sunday morning, just beyond the Little River Marina on Bells Ferry Road.

They formed a loose circle once they reached the pine tree-lined cove, sitting in restful poses on their boards as they waited for yoga practice to begin.

“We call it stand-up paddleboard yoga, or SUP yoga,” said Jana Rife, 51, the group’s certified instructor. She is passionate about sharing yoga’s physical and mental disciplines, which originated in ancient India.

Rife blends traditional yoga sessions with balancing on paddleboards and exploring Georgia’s lakes, taking the exercises to a new level of stretching and finding inner peace. The Canton resident is certified to teach both. She also maintains certifications in CPR, first aid, and automated external defibrillator from the American Heart Association because of the potential dangers that come with any type of water activity.

“Everyone can benefit from yoga, especially with the daily stress that we all deal with,” she said. “It’s sad if someone does not experience yoga because they think they are not flexible enough, or thin enough. Yoga and meditation can bring so much calm, with many health benefits of both.”

Meditation is as simple as connecting to your breathing, she said.

Rife said she struggled for many years with fear, self-doubt, anxiety and depression.

“I had a very stressful corporate manager job. I didn’t know what was wrong with me. My doctors kept encouraging me to do yoga,” she said. “Fear almost held me back, but after my first yoga class in years, I was hooked.”

Rife said she was “a whole new person” after that class.

“Yoga and meditation can be an incredible source of self-confidence and a way to know one’s self better. I can’t imagine where I would be now if I didn’t live my passion,” she said.

Rife began a 200-hour yoga training course in 2014 and quit her job after securing certification to teach yoga. She explored paddle boarding for the first time eight years ago in Hawaii on the Hanalei River.

“I remember the moment we were all facing Diamond Head crater on the water. I looked down, and it was so clear we could see the fish. It was a magical moment and very centering. It changed my life because I felt like it was my calling to teach paddle boarding and blend it with yoga. It was where I was supposed to be,” she said.

She launched Hanalei SUP Yoga in 2015 and teaches classes in lake locations in Cobb and Cherokee counties, as well as north Georgia, Alabama and Florida.

In the hourlong SUP yoga sessions on the lake, Rife takes her students through a series of poses that stretch muscles and improve balance with each student working at their individual levels. She’s taught a full range of ages, from school-aged children to a group of elderly women.

“One woman told me after the session that she’d had a double knee replacement. She was 80 years old, and she did great,” Rife said.

“A lot of people come to class with anxieties — about getting on the paddleboard or being on the water, falling in the water in front of other people, or being stuck in the water unable to get back on the board. But then they discover they can do yoga on a paddleboard, and it’s easy to stand on a paddleboard and steer through the water, and they become passionate about it. I help people experience fun and laughter now, and relieve the stress from their day,” she said.

Kelly Prewitt, 47, of Milton discovered the practice three years ago.

“It’s given me a new way to experience yoga — floating on the water beneath the trees, listening to the birds chirp, watching the ducks paddle by — and there’s the added challenge of balancing on a board,” Prewitt said. “We can only do it from May through October, so I try to do it every weekend. I love the camaraderie that’s formed with all the women of like minds.”

Misty Meyers, 59, of Holly Springs, agreed, calling the activity “a blessing to be with a great bunch of like-minded people all while on the water.

“Yoga on a paddleboard is a workout. It tests your mind-body connections and teaches you to find your center. You learn to balance yourself on the board and off,” Meyers continued. “This year, as it’s been for most of us, I needed an outlet. Beyond just loving being on the water, I love how soothed I feel at the end of a yoga session,” she said.

Georgians are signing up for Obamacare in record numbers