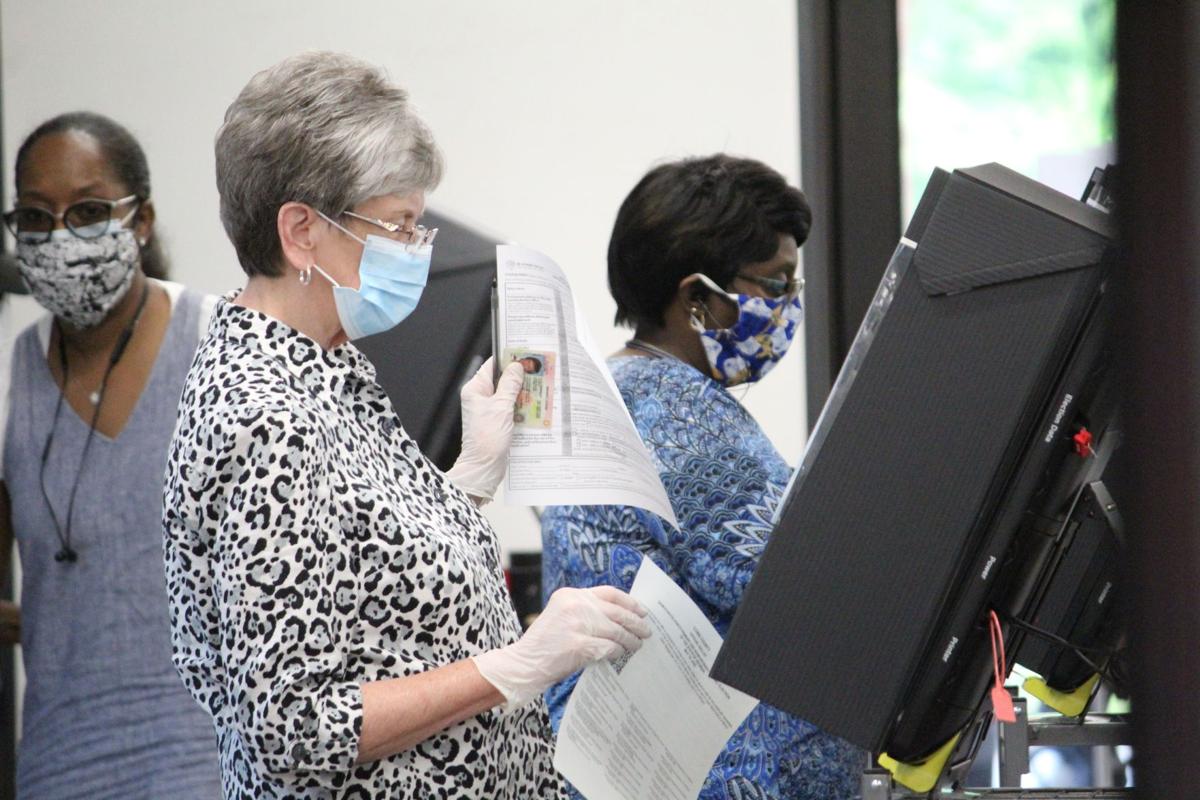 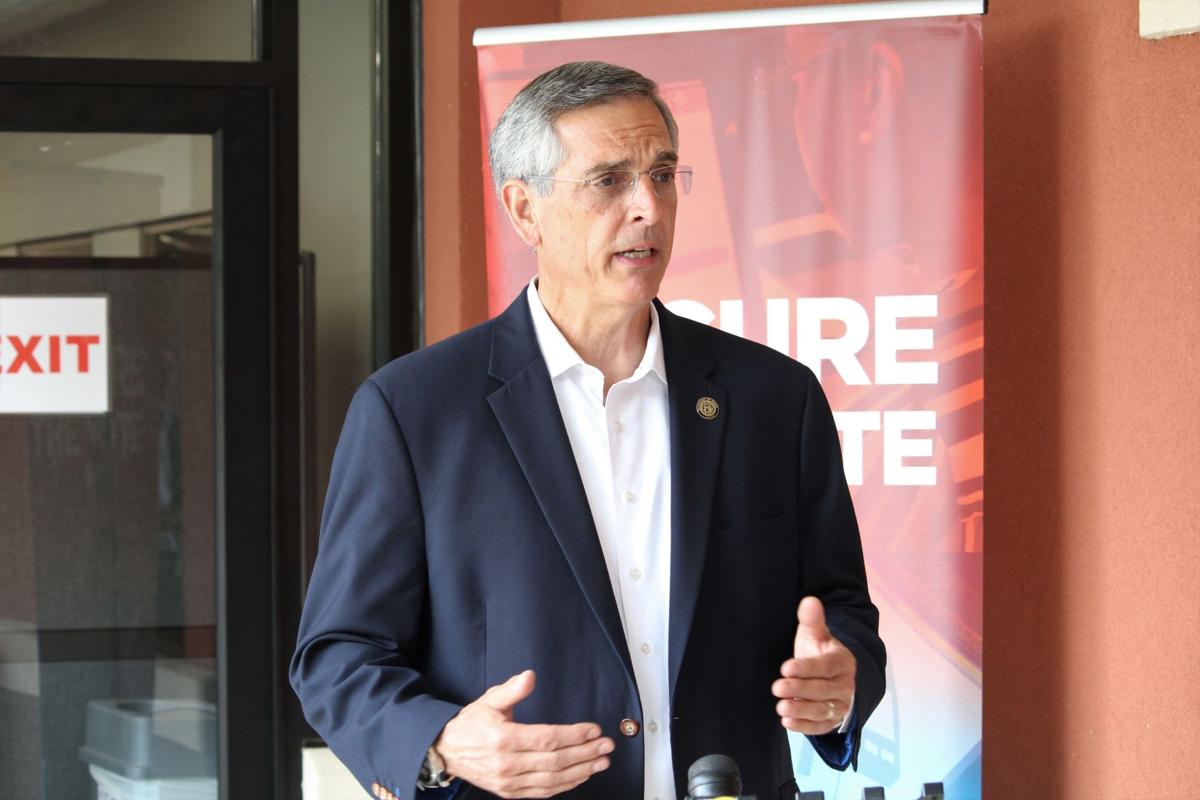 Secretary of State Brad Raffensperger visited the Cobb elections office on May 18. 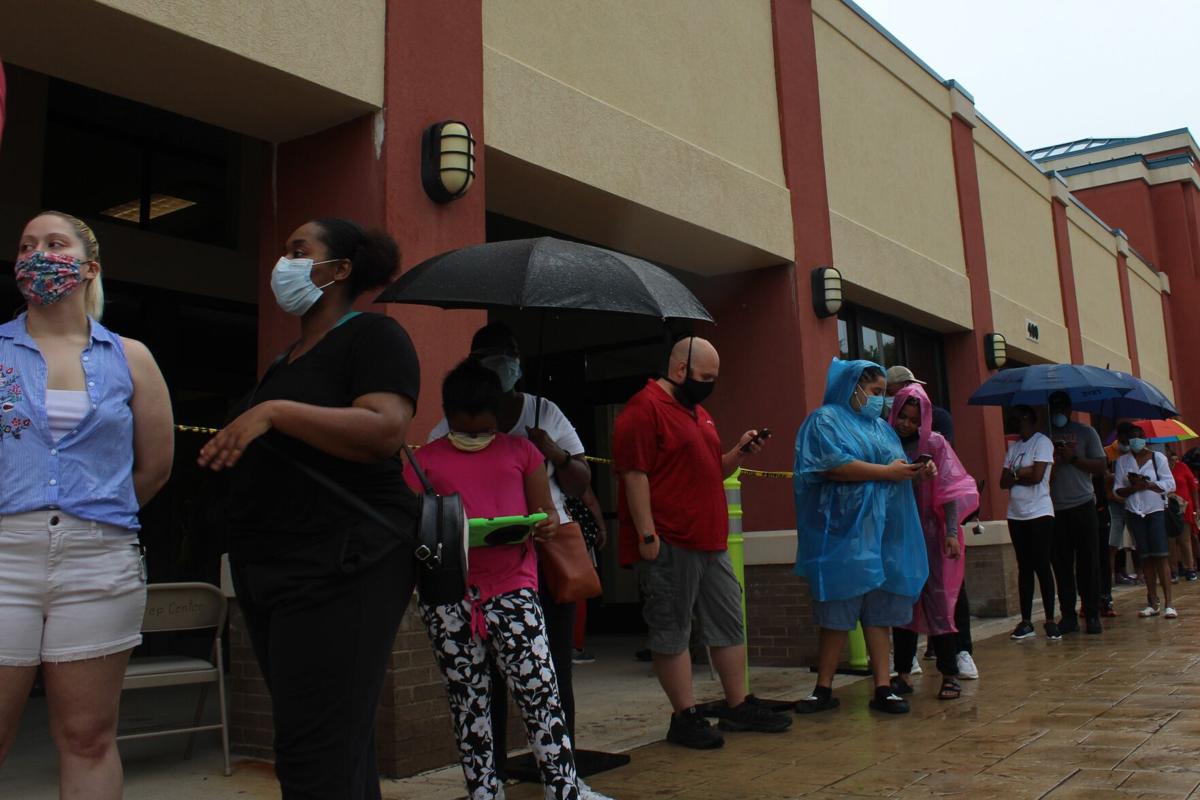 Voters wait for early voting outside the Cobb Elections and Registration main office on Whitlock Avenue in Marietta. 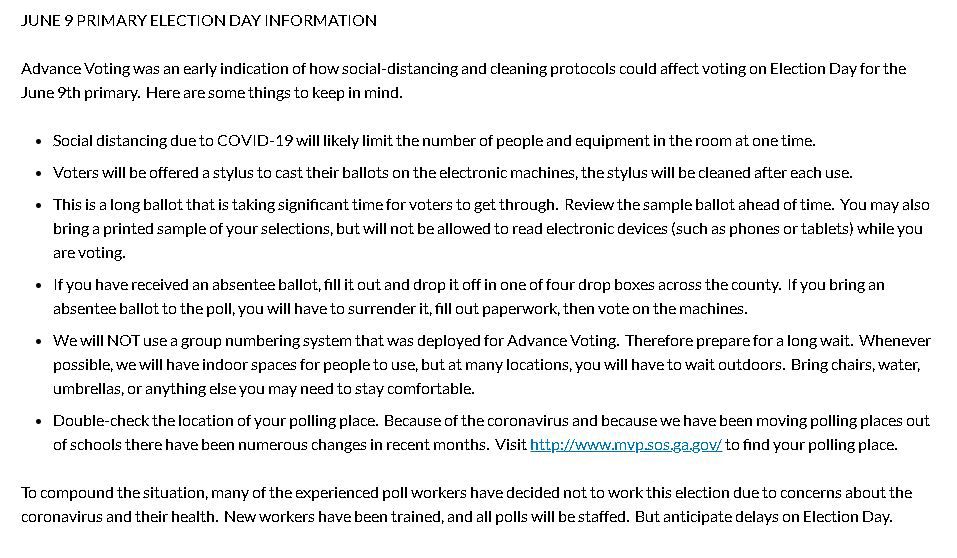 Cobb County issued this message to voters on its website as an advisory for Election Day.

+4
Get Cobb County news and local guidance about the coronavirus outbreak.

Secretary of State Brad Raffensperger visited the Cobb elections office on May 18.

Voters wait for early voting outside the Cobb Elections and Registration main office on Whitlock Avenue in Marietta.

Cobb County issued this message to voters on its website as an advisory for Election Day.

Following a final day of early voting that saw some Cobb voters waiting in lines for more than four hours, Cobb and state elections officials say Election Day voters could see more of the same, as well as a delay in election results.

“We are in uncharted territory this time around, so I can’t promise results at any particular time,” said Cobb Elections Director Janine Eveler. “We will be lucky if it’s not several days after the election.”

Election Day for the presidential preference primary, as well as local primary and other elections, is Tuesday. Polls open at 7 a.m. across the state. Any necessary runoffs will be held Aug. 11, and general elections will be held on Nov. 3.

Primary elections have been slowed this cycle by precautions related to COVID-19.

Until this year, local primary elections and presidential preference primary have never been combined before, and elections offices everywhere are having to implement new and time-consuming protocols.

Then there is the challenge of fewer available poll workers and last-minute Election Day precinct location changes, she said.

Because of these challenges, both the local elections office and Secretary of State Brad Raffensperger have been encouraging voters to vote by mail. According to the latest statistics, 80,164 of the more than 143,000 absentee ballots issued in Cobb have been returned.

More than 1.2 million Georgians have cast ballots so far by mail and during the early voting period, a record turnout for a primary election that should help curb the amount of in-person voting on Tuesday, Raffensperger said. As of Monday, roughly 950,000 voters had cast absentee ballots, though many still had not received ballots weeks after requesting them.

“Things would be better if we weren’t in this pandemic,” Raffensperger said at a news conference Monday. “But it is what it is.”

The county’s 80,000 returned absentee ballots out of more than 143,000 issued has far outpaced the rate of voting in-person this cycle, according to the latest early voting statistics available on the county’s website. The statistics do not include ballots being returned by mail over the weekend or on Monday.

In-person voting totaled 11,527 through the three-week early voting period from May 18 to June 5, with just under 5,500 of those ballots cast at the main elections office on Whitlock Avenue in Marietta.

In the 6th District, former U.S. Rep. Karen Handel is seeking to take her seat back from incumbent U.S. Rep. Lucy McBath, D–Marietta in November’s general election, but she’ll first have to beat fellow Republicans Mykel Lynn Berthelemy, Blake Harbin, Joe Profit and Paulette Smith in the primary on Tuesday.

In the U.S. Senate, which Democrat will win to challenge U.S. Sen. David Perdue, R-Georgia, is also being closely watched.

In the race for chair of the Cobb commission, incumbent Mike Boyce will face Ricci Mason and Larry Savage in the Republican primary for a chance to take on sitting Democrat Commissioner Lisa Cupid for the chairmanship in November.

Cupid’s run for chair also means her District 4 commission seat will be up for grabs in November. No Republicans qualified to run for the seat. Instead voters will have to decide between one of seven Democrats in the primary on Tuesday.

In the race for Cobb County sheriff, the winner of the Democratic primary between Gregory Gilstrap, James Herndon and Craig Owens in November will take on incumbent Neil Warren, who has served in the role for 16 years.

As for the Cobb school board, Post 5 incumbent and board Vice Chair David Banks will face two Republican challengers, Shelley O’Malley and Matt Harper, on Tuesday. The winner of that primary nomination will run against the winner of the Democratic primary, between Dr. Julia Hurtado and Tammy Andress.

While most elections on Tuesday will be primaries with a general election to follow, nonpartisan races will be decided unless a runoff is needed. Nonpartisan races include those for Georgia Supreme Court justices and judges for appeals court, Cobb Superior Court, State Court of Cobb County, Probate Court and Chief Magistrate.

Where, how and when do I vote?

All voters must report to their designated voting precincts on Election Day. Polls will be open from 7 a.m. until 7 p.m.

To ensure that a voter will be able to cast their ballot, Eveler said, they will need to be in line by 7 p.m. Tuesday.

The following two temporary changes to precinct locations are effective for the June 9 elections:

To see whether your precinct location has changed in the past year, visit go.aws/2YdckBh.

Lisa Cupid, the sole Democrat and black member of Cobb County’s governing board, criticized Monday her colleague’s revisions to a proposed res…

'Systemic racism' the target of prayer and protest across Cobb Saturday

Pastor David Eldridge of Marietta's Stonebridge Church stood before a crowd Saturday morning and told them something obvious: "I'm white," he …