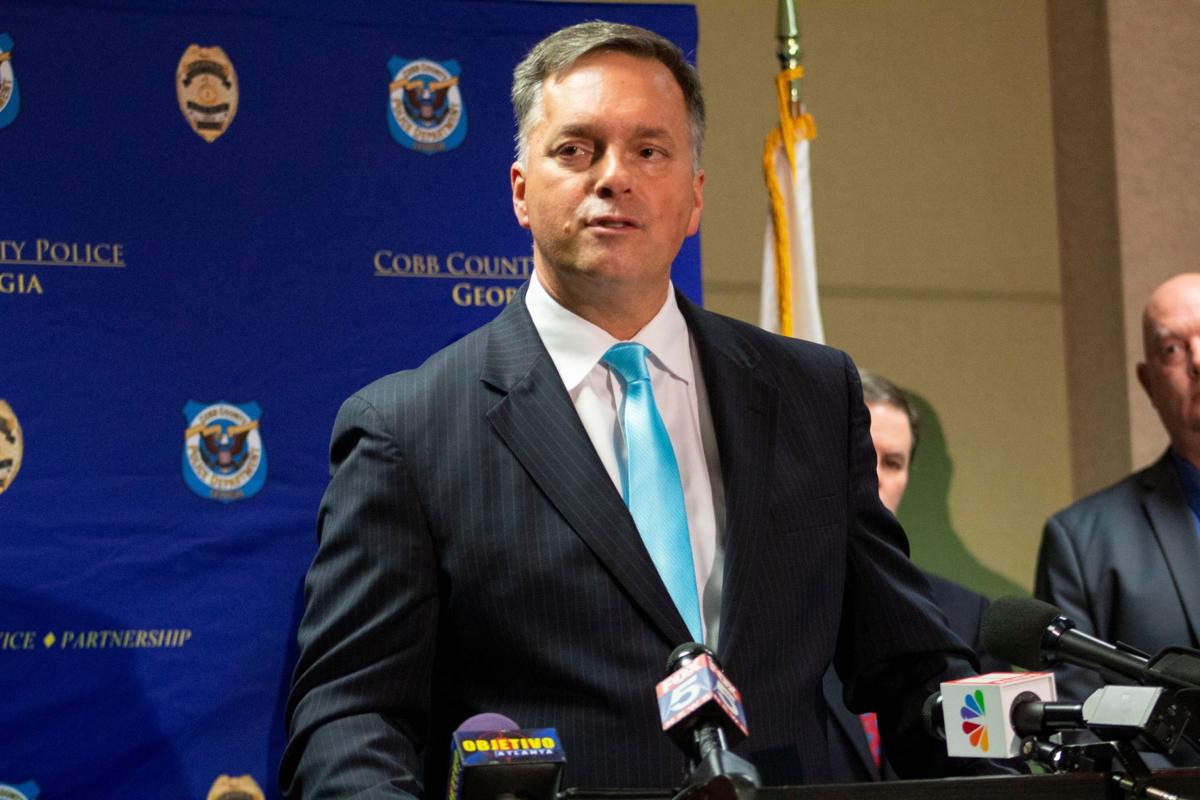 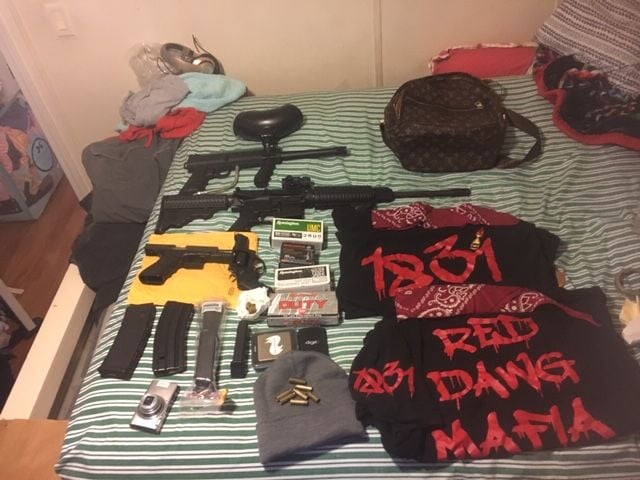 Eleven gang members were indicted Thursday on 74 counts of violent crimes and gang act violations. Nine of the 11 were arrested Friday morning. Pictured above: Evidence collected through a search warrant at one of the scenes on Friday morning. /Special 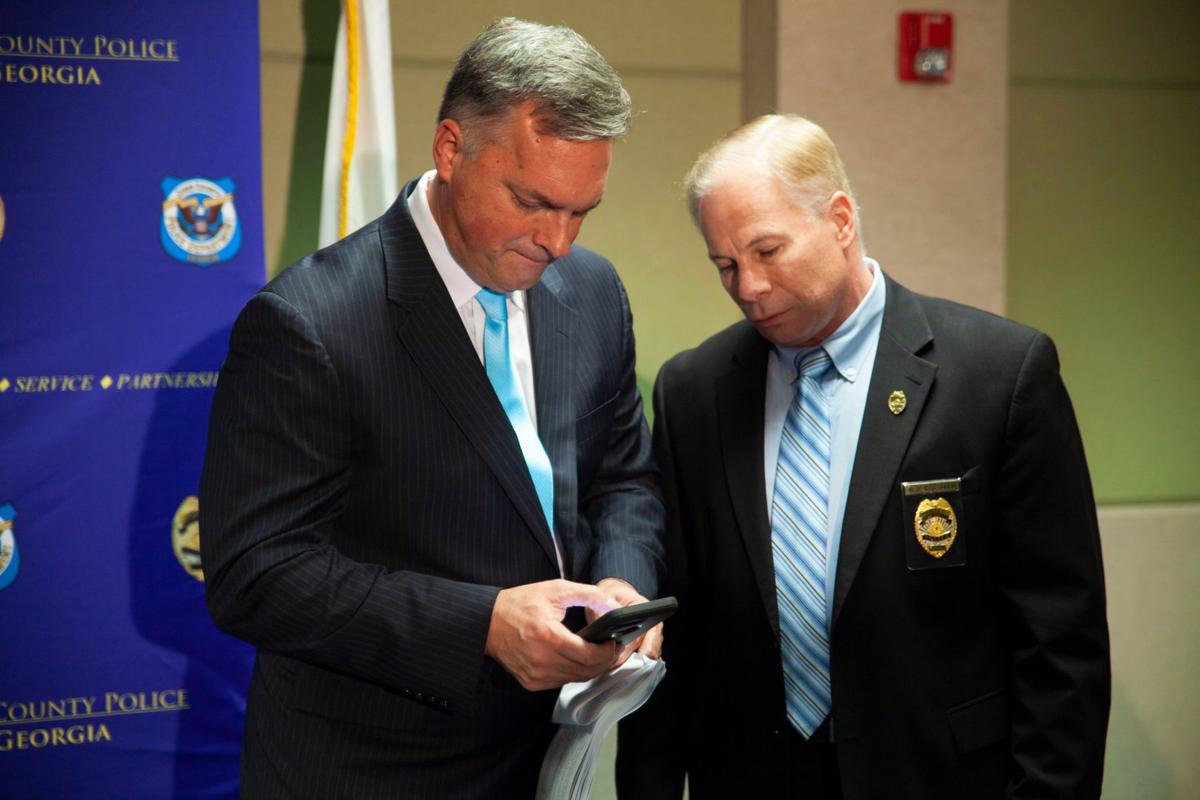 Eleven gang members were indicted Thursday on 74 counts of violent crimes and gang act violations. Nine of the 11 were arrested Friday morning. Pictured above: Evidence collected through a search warrant at one of the scenes on Friday morning. /Special

MARIETTA — Eleven members of a Bloods-affiliated street gang operating in Cobb County have been indicted on charges of what top Cobb law enforcement and prosecutors on Friday called “the most violent and heinous crimes of all.”

The 74-count indictment includes aggravated assault, armed robbery, battery, drug and firearms charges, as well as violations of the Street Gang Act and Racketeer Influenced and Corrupt Organizations Act, or RICO. Acting Cobb County District Attorney John Melvin announced Friday afternoon that nine of the 11 named in the indictment were arrested in coordinated operations that morning. All nine were taken into custody without incident, he said. All nine are in custody at the Cobb County jail.

Ethridge Mosley, 51, the leader of the Bloods-affiliate gang, known as 1831 Pirus, and Malique Jose David, 32, a key lieutenant, were two of the arrested. The indictment lists Mosley’s first name as “Etheridge,” while jail records show “Ethridge.” Two defendants, Alexander Lee Blanton and Orlando Zapata, have not yet been arrested, but Melvin said investigators have leads.

“Together, these defendants will face hundreds of years in jail,” Melvin said. “The search warrants and the arrest warrants that we executed yielded a lot of extra evidence ... as well as a number of illegal firearms, narcotics and other gang paraphernalia.”

“The efforts of Cobb County, through our recent indictments – our large indictments – against the gang are starting to make an impression, not only in Cobb County but across the state,” he said. “We actually have documentation where some gang members are saying, ‘Don’t go to Cobb ... they’re handing out RICO like speeding tickets.’”

Melvin said the indictments and arrests are a result of the team work of law enforcement agencies in Cobb, Paulding, Fulton, Fayette, and Baldwin Counties, as well as the city of Milledgeville, where he said the 1831 Pirus originated. He said every listed agency participated in the coordinated arrest operations.

Cobb County Police Chief Mike Register said the extent of the indictments and locations of those arrested show that the gang’s impact has been far-reaching.

“These gangs have tentacles all across Georgia, all across the United States, and in some cases, locally, and it really does take a very strong partnership, not only with the law enforcement agencies, but also with our court system,” Register said, adding that many violent crimes scenes in the county can be traced back to gang activity.

Melvin said while the investigation into the gang activities outlined in the indictment provides accounts dating back to 2012, investigations have been active for “a number of months.”

Jimmy Calloway, president of the Georgia Gang Investigators Association, said the organization conducted a survey in 2018 that estimated there were 70,000 gang members in the state. Calloway said that number shows gang activity is a crisis.

The 11 men named in the indictment handed down on Thursday are:

♦ Alexander Lee Blanton, not in custody

♦ Orlando Zapata, not in custody.

The four Cobb inmates who police say stabbed and beat another inmate earlier this month are now facing gang charges, accusing the men of affil…

GREAT teamwork!!! Keep going!! Get them ALL and PLEASE don't let the Georgia Pardons and Parole Board early release them, either!!! #recidivists

Keep the pressure up. We have great Public Safety officers in Cobb.