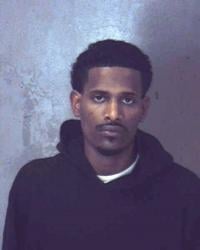 An Atlanta man was caught with around $80,000 worth of cocaine and two guns in his car after dealing heroin to a police officer through a third party at a Cobb County Walmart, arrest warrants allege.

Brandon Jarvis Smith, 38, was arrested by Cobb sheriff’s deputies on Cobb Parkway around 2 p.m. on Dec. 10, his jail record states.

Per warrants, Smith was at the Walmart Supercenter at 1785 Cobb Parkway, off Interstate 75 at Terrell Mill Road SE, around 1:30 p.m. on Dec. 10 when he sold 29.5 grams of heroin to a police officer, via a third party identified as Decatur resident Negusse Takela Solomon.

Solomon, also listed by authorities as Solomon Takela Negusse, met with Smith and conducted a “hand to hand” transaction, then walked to the officer’s vehicle, got inside, and handed the officer the 29.5 grams of heroin, warrants state.

The police officer then gave Solomon $1,800 from the Marietta-Cobb-Smyrna narcotics unit, and Solomon went back to Smith and conducted another “hand to hand” transaction, police said.

“When said accused (Smith) was taken into custody he had in his possession $1,200 of official MCS funds,” warrants state.

Police said Smith had 778.7 grams of cocaine in his vehicle, a Ford Fusion with a New York tag, along with an AK-47 pistol and a Glock handgun.

Based on the commonly listed average street price of $100 per gram of cocaine, the drugs allegedly found in Smith’s car were worth almost $80,000.

State troopers initiated a vehicle pursuit and motioned for Smith to stop, but he accelerated through a red traffic light at an intersection and crashed into the concrete wall of a bridge, warrants state.

Smith then ran on foot from the vehicle and was tasered by police officers in pursuit, warrants state.

He gave a fake name when apprehended, police said.

Two warrants were issued on Dec. 10, one for Smith and the other for his alias, Knowledge Allah Puryear.

Smith remains in custody without bond at the Cobb jail facing seven charges, including five felonies, his jail record states.

Smith is charged with single felony counts of trafficking cocaine, selling heroin, and fleeing police, as well as two felony counts of possessing a gun during the commission of a felony, his record shows.

He is also charged with two misdemeanor counts of obstructing police and giving a false name, per his jail record.

Solomon faces the same single felony charge of selling heroin in relation to the Dec. 10 incident, as well as two felony counts of possessing marijuana with intent to distribute and using a cellphone to complete a drug transaction, his warrant shows.

Police said on Dec. 10 at the Walmart Supercenter Solomon had 11 small plastic baggies containing a total of 43 grams of marijuana inside his pocket, and that he used a cellphone to complete a drug transaction with the arresting officer using text messages and calls.

Warrants further show Solomon is also subject to a felony charge of selling methamphetamine at the same Cobb Walmart Supercenter between 2:30 p.m. and 4 p.m. on Nov. 6.

Police said Solomon sold a police officer 58.3 grams of methamphetamine for $550 during that incident.

Solomon’s arrest warrant states he was taken into custody, but Glenn Daniel, a spokesman for the Cobb sheriff’s office, told the MDJ there is no record of him at the Cobb detention center.

A mugshot of Solomon was supplied to the MDJ from the DeKalb County Sheriff’s Office.

A man who headbutted a woman in the face and clawed her in the eye, according to Cobb police, is behind bars facing three charges in relation …

A Smyrna landlord hid a camera in his female tenant’s bedroom so it faced her bathroom, police say.

A 50-year-old male inmate at the Cobb County jail punched another inmate so hard the victim’s jaw was shattered and rendered useless, police say.

Number of unionized Tennessee workers continues to drop in 2020

From firewood to fashion, these subscription boxes from Chattanooga businesses basically guarantee a better year in 2021