A former Acworth lawyer who stole hundreds of thousands of dollars from elderly clients is already out of jail, released the same day he pleaded guilty and was sentenced by a Cobb Superior Court judge.

Anthony Eugene Cheatham, 63, appeared before Judge LaTain Kell on Friday and admitted to six counts of theft, four counts of elder exploitation and charges of racketeering as well as unlicensed practice of law.

He was sentenced to 20 years in prison, with one year to serve, but was released that day on time already served.

Cobb jail records show Cheatham was in custody for 445 days since being arrested by Cobb Sheriff’s officers in Acworth on April 30, 2018.

His jail record listed 24 charges in total, including 10 counts of theft by taking, two of forgery in the first degree, and eight counts of exploiting the elderly.

A press release by the Cobb District Attorneys’ office said Cheatham is never allowed to practice law again, nor can he ever act as an agent, trustee or fiduciary, or work in any position where he is responsible for the care or finances of another person.

“One theft, in 2017, occurred while Cheatham’s law license was suspended,” the July 22 press release stated. “He has now been disbarred.” 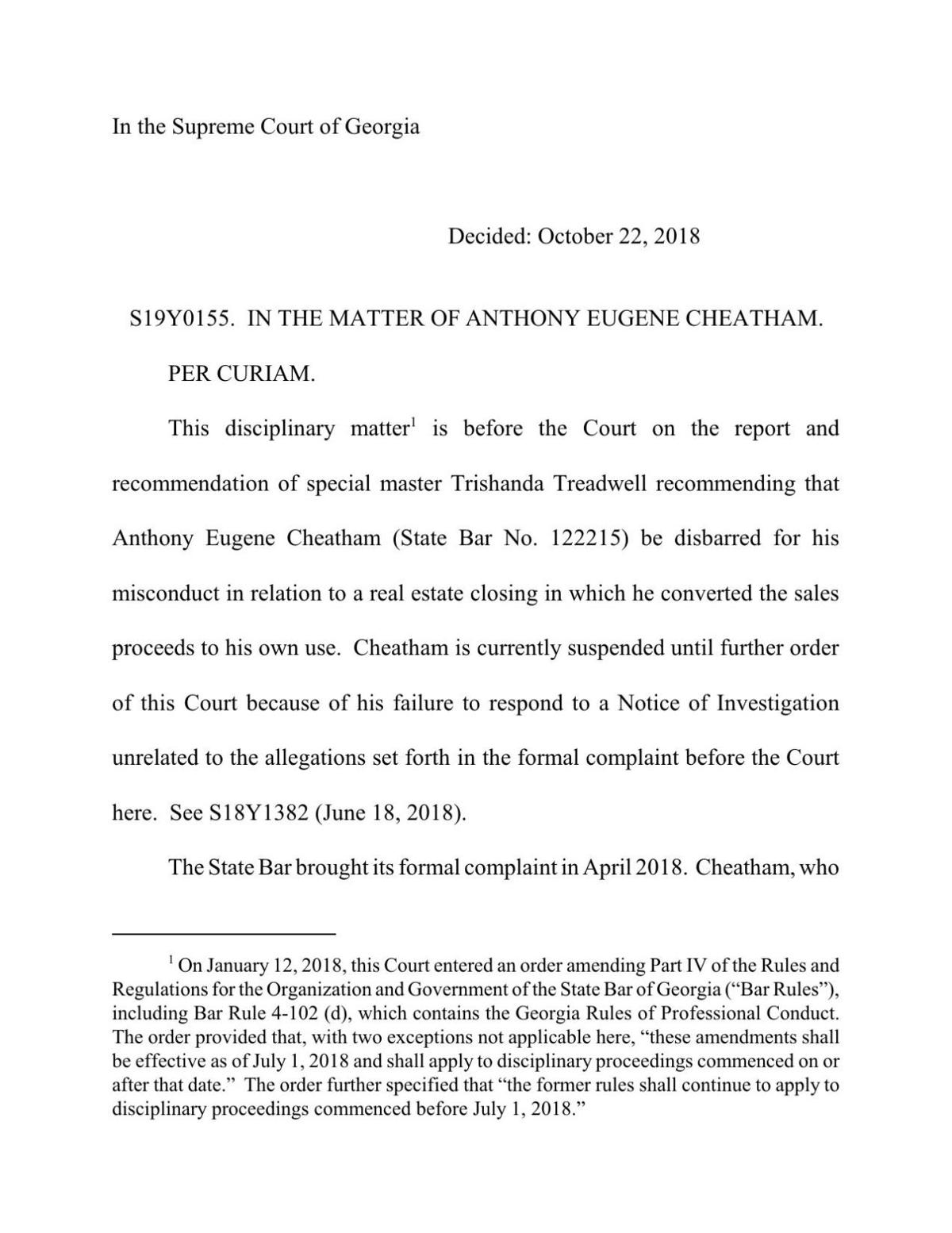 All Cheatham’s victims, including some who had over $100,000 stolen by the disgraced lawyer, have each been repaid in full by his family, the DA’s office said.

An investigation by the Cobb County Sheriff’s Office found he began misappropriating money entrusted to him by his clients as early as 2012.

He did this by using client money to pay personal bills, write personal checks to himself and family members, and make payments to other individuals from whom he had previously taken money, the DA’s office said.

Warrants show Cheatham stole almost $400,000 from his clients, most of whom were elderly.

In one case, he acted as the closing attorney for a couple purchasing an Acworth home along Rose Arbor Drive in 2012, when he reportedly took the money but failed to pay the mortgage held by Wells Fargo.

The couple notified authorities after receiving foreclosure notices from the bank.

“To conceal his deceit, Cheatham showed his clients phony documents and provided false excuses regarding their money,” the DA’s press release stated.

Warrants claim the couple’s Rose Arbor Drive home was supposed to be paid for shortly after they closed on it, but the mortgage defaulted with an outstanding balance of $179,928.

Cheatham used white-out to alter a wire transfer slip that he showed his clients, to make them believe their home had been purchased, police say.

In another case, he reportedly took almost $190,000 from a different couple for the sale of their Acworth home along McEver Woods Drive in 2016, and falsified computer records to cover it up.

Assistant District Attorney David Williamson said it is unique the victims were able to be repaid all their stolen money.

“However, that does not excuse the defendant’s behavior and the violation of the oath the defendant took as an attorney to uphold the law,” Williamson said. “Mr. Cheatham violated his position of trust as an attorney, and even more egregiously, did so against elderly clients.”

Residents look for hope and pray against violence on Inauguration Day

Austin commits to relying on career civilians to craft Pentagon policy, if he becomes defense secretary