Austell man charged by GBI in shooting of Cobb policeman 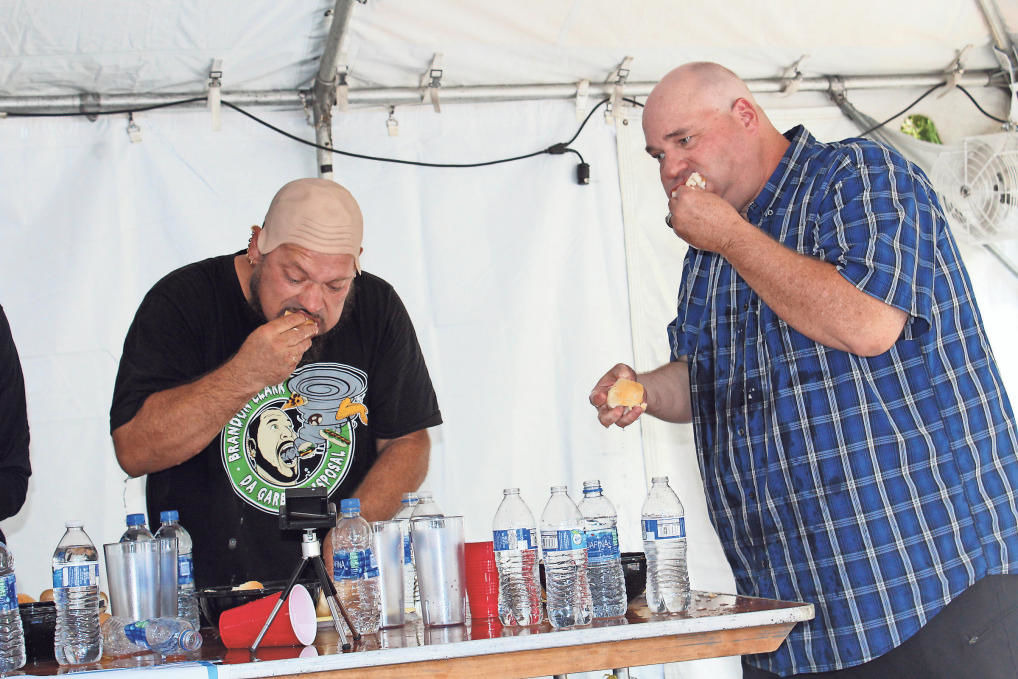 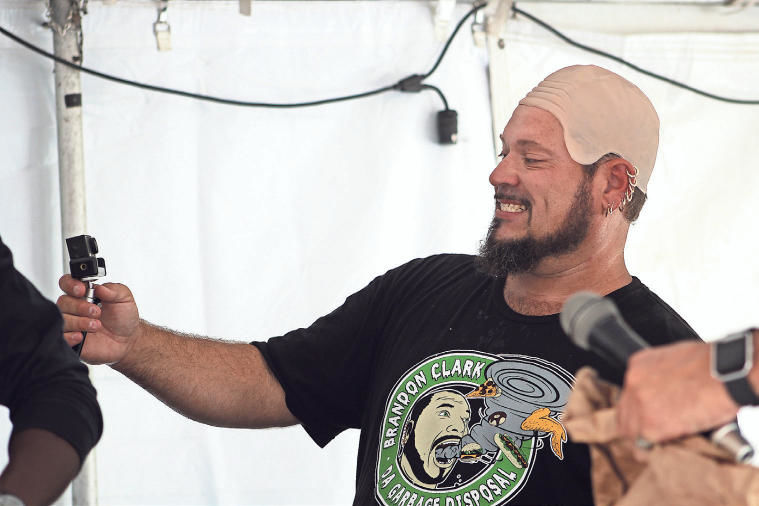 Clark mugs for his YouTube channel after winning the contest.  / Ross Williams 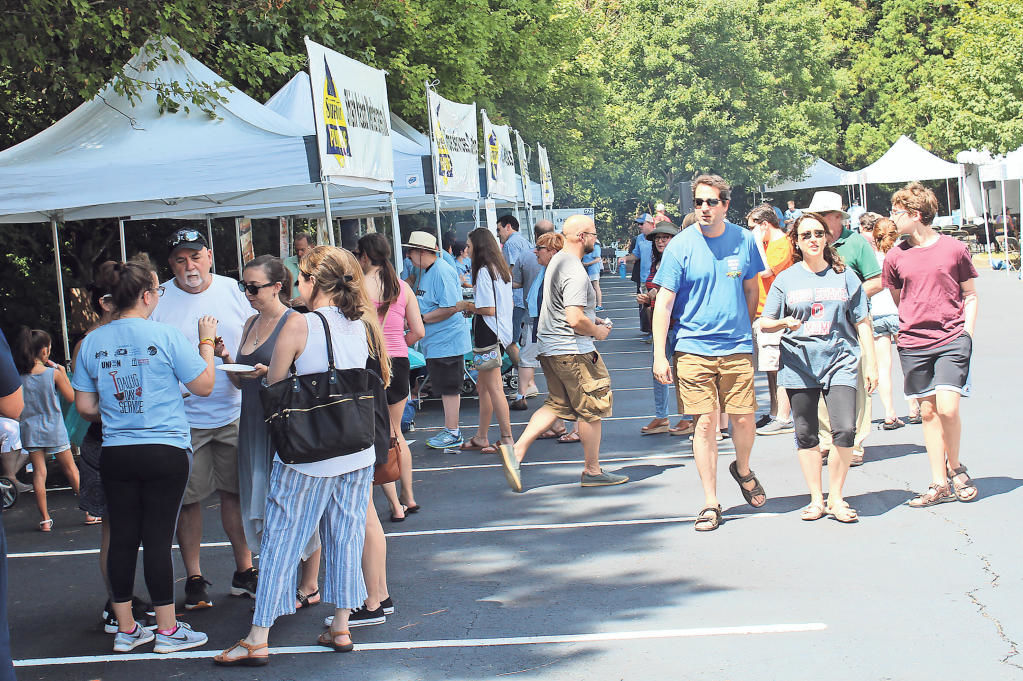 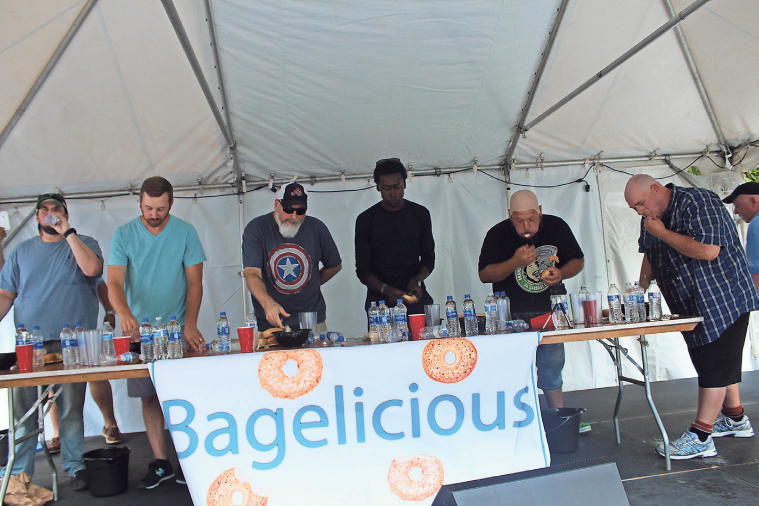 The six competitors of the Nosh fest bagel-eating contest chow down. / Ross Williams

Clark mugs for his YouTube channel after winning the contest.  / Ross Williams

The six competitors of the Nosh fest bagel-eating contest chow down. / Ross Williams

Labor Day weekend was a great time for festivals, and for lovers of Jewish cuisine, there was no better spot in town than east Cobb’s Temple Kol Emeth.

There, under the beautiful blue sky, the synagogue hosted its eighth annual Noshfest, a celebration of Jewish food and culture. People were smiling, children were dancing, couples gazed into each other’s eyes as they shared plates of latkes, kugel, blintzes and knishes.

But behind the scenes, a battle was brewing— a bagel battle.

Six men stepped up to the chewy challenge at the festival’s third annual bagel-eating competition, a contest to see who could scarf down the most bagels in five minutes. The bagel champion earned a pile of dough, $500.

And these were not piddly grocery store bagels. They were big, dense and doughy traditional plain bagels, donated by east Cobb’s Bagelicious.

“We hope you enjoy the opportunity to watch these folks as they chew and chew and chew unlike you’ve seen people chew before,” said announcer Stewart Weiss. “We’ve made sure their dentists know what’s going on as well... Eaten bagels must be — get this, folks — eaten bagels must be retained in the stomach until the conclusion of the awards ceremony. Those of you wishing to get in the front seats, do so now.”

By the time the contest began, a large crowd had gathered at the stage behind the food area and children’s bounce houses to cheer on the eaters.

The smart money was on the contest’s two competitive eaters, Atlanta’s Dale “Mouth of the South” Boone and Brandon “Da Garbage Disposal” Clark, originally from St. Louis. Both men employed a tried and true competitive eating strategy, tearing up the bagels and dunking them into water to make them mushy before cramming the soggy chunks into their mouths.

And although bagels were the main attraction, there was also a side of beef. It was between Boone and Clark. Clark took a spot at the table next to the bald-headed Boone and donned a rubber bald cap before the eating began.

When the clock started, it was bagel bedlam. The four non-professional eaters started strong, but after the first bagel or two, they began to lag behind. Sweat pooled on their foreheads and they started to wince with each labored bite.

But Clark and Boone marched on like slobbery bagel-munching machines, continuing to pound back the bagels until the last second.

Clark set up two miniature cameras on tripods around the stage and had a third on the table in front of him, all filming for his YouTube channel. At times during the contest, he mugged for the camera, once mock running in slow motion when the DJ played the theme to “Chariots of Fire.”

When the judges made their final tally, Clark won the day with seven bagels downed to Boone’s six. The previous Noshfest record was five.

“It was hard,” Clark said after the contest. “I’ve never had bagels before— I’ve eaten bagels before, but not in a contest. They were chewy, and they were good bagels, but it was just difficult. And they were big, as soon as I noticed that as soon as I got up there, I was like ‘Man, those are big.’” Clark said the bagels’ outer skin made them impervious to water, so it was a matter of tearing them up into small enough pieces to get them waterlogged.

He said the life of a competitive eater involves lots of time on the road, traveling to festivals like Noshfest, where the results are never certain.

best I can. I tell people if you don’t try, you’ve lost already.”

But Clark said it is a lifestyle he enjoys, and competitive eating is a talent that lets him help others as well.

“Instead of taking money all the time, coming to events and getting money, every now and then I do the Special Olympics or a fund drive for an organization to try to give back,” he said.

Clark declined to say why there is bad blood between him and Boone, but he described Boone as “obnoxious.” Videos on the web show Clark wearing the same bald cap at other competitions with Boone.

According to publications and social media posts from within the competitive eating world, Boone is infamous with other eaters. His career has included suspensions and accusations of cheating.

“Boone has maintained a reputation as a combative competitor who has disrupted some eating events with verbal excess,” reads his profile on majorleagueeating. com. “He is not well liked.”

But as Boone walked back to his car, he said he is at a point in his career where he can start to chill out. He said he will take the loss and the bald cap in stride.

“He was just trying to irritate me,” Boone said.

crocodile eggs in Thailand and cobra meat in India. He has several major wins under his large belt and has made appearances on television and in film, including on “The Tonight Show with Jay Leno.”

“As the years go on, I’m starting my 19th year at the first of the month in October, I’m slowing down a little bit,” he said. “I’m enjoying the benefits of being prosperous, it’s to the point now where I just eat whenever it’s a good contest because I don’t have to show off or make a name for myself.”

Despite the behind-thescenes drama, the crowd at Noshfest appeared to have a good time, with several walking up to shake hands and congratulate the competitors. Others walked back to the vendor area to get in line for a bagel of their own, presumably to eat at a more leisurely pace.

Bob Jaric, a member of the congregation at Temple Kol Emeth and one of the organizers behind the contest, said it has become a major draw for Noshfest.

“The members and attendees at Noshfest and especially the bagel-eating contest know that the most fun place to be on Labor Day in Marietta is at Temple Kol Emeth,” he said.

Marching to the capitol, Ghostface gangsters and more stories you missed over the weekend