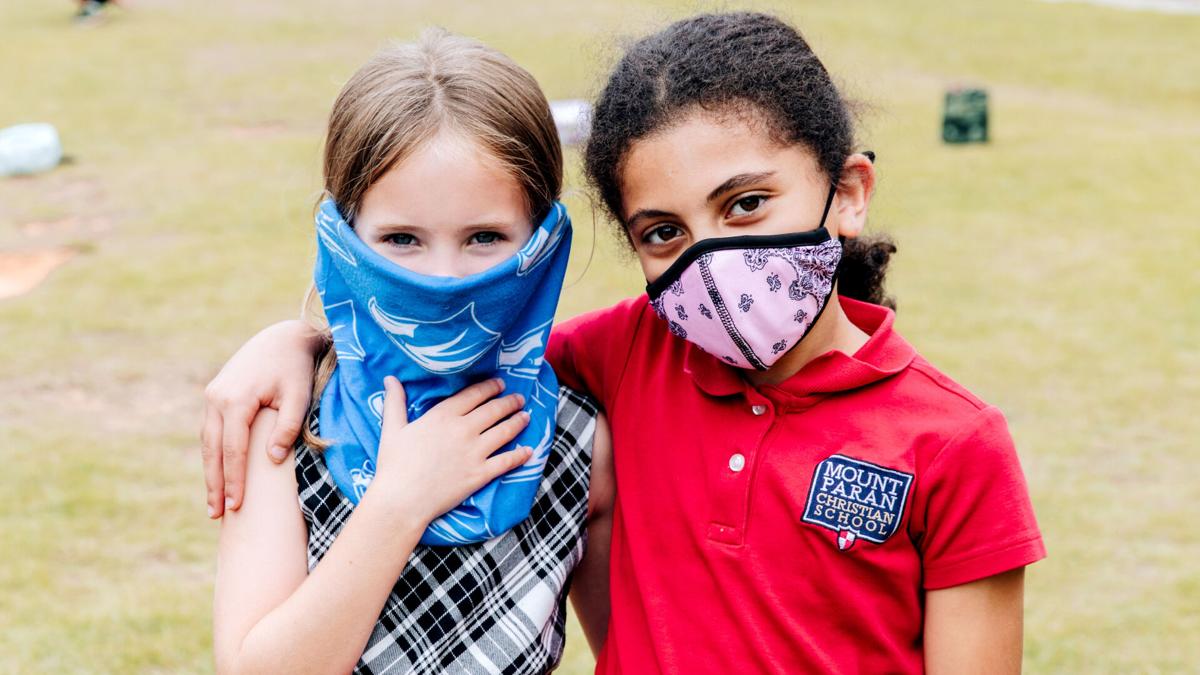 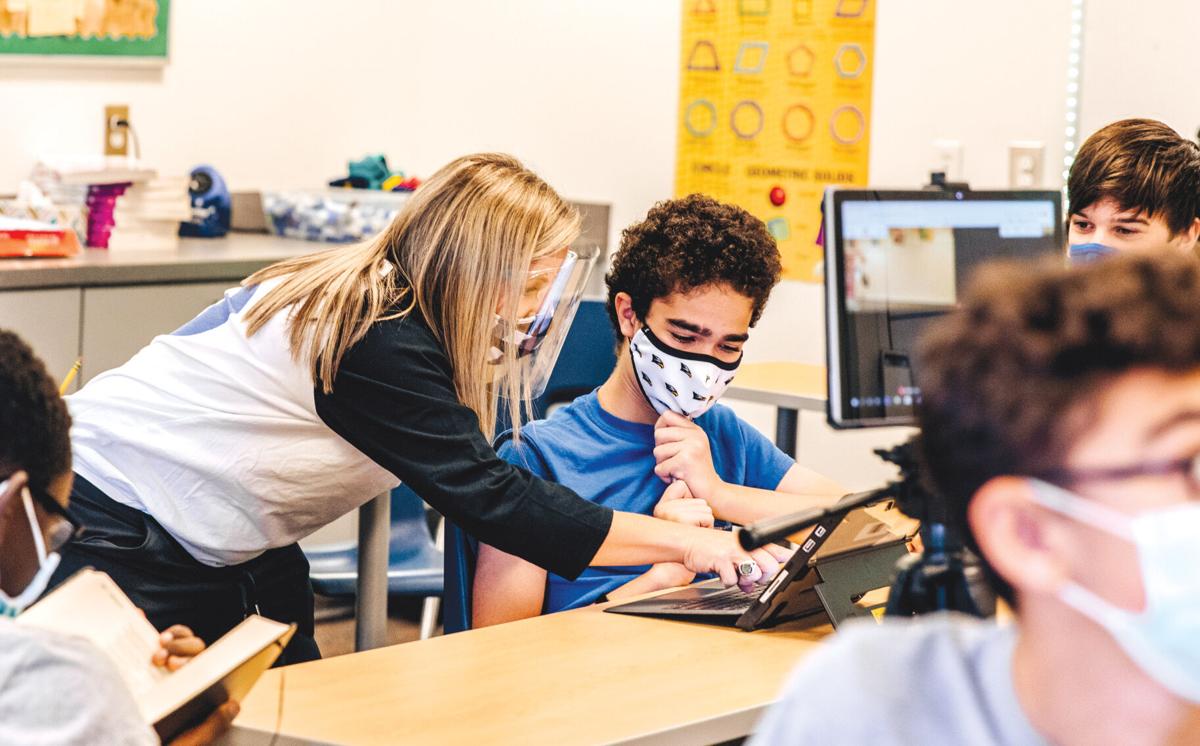 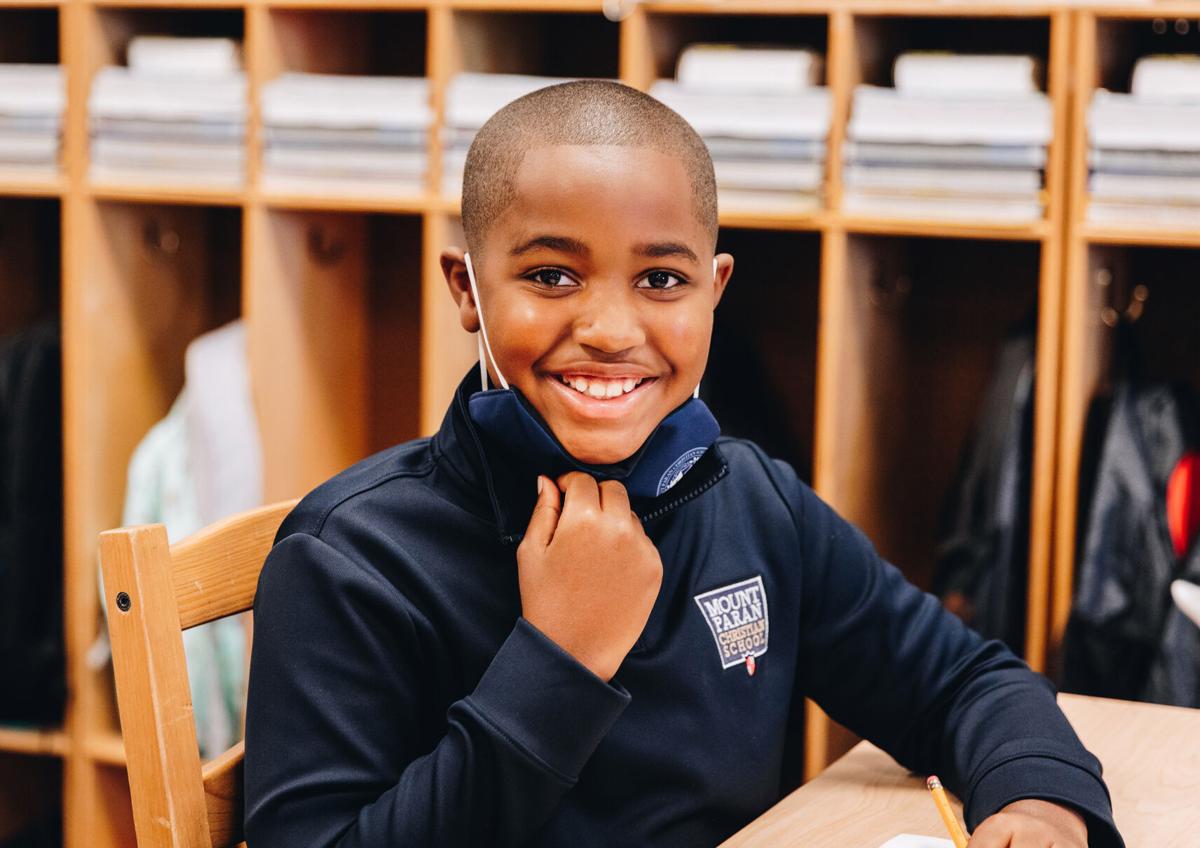 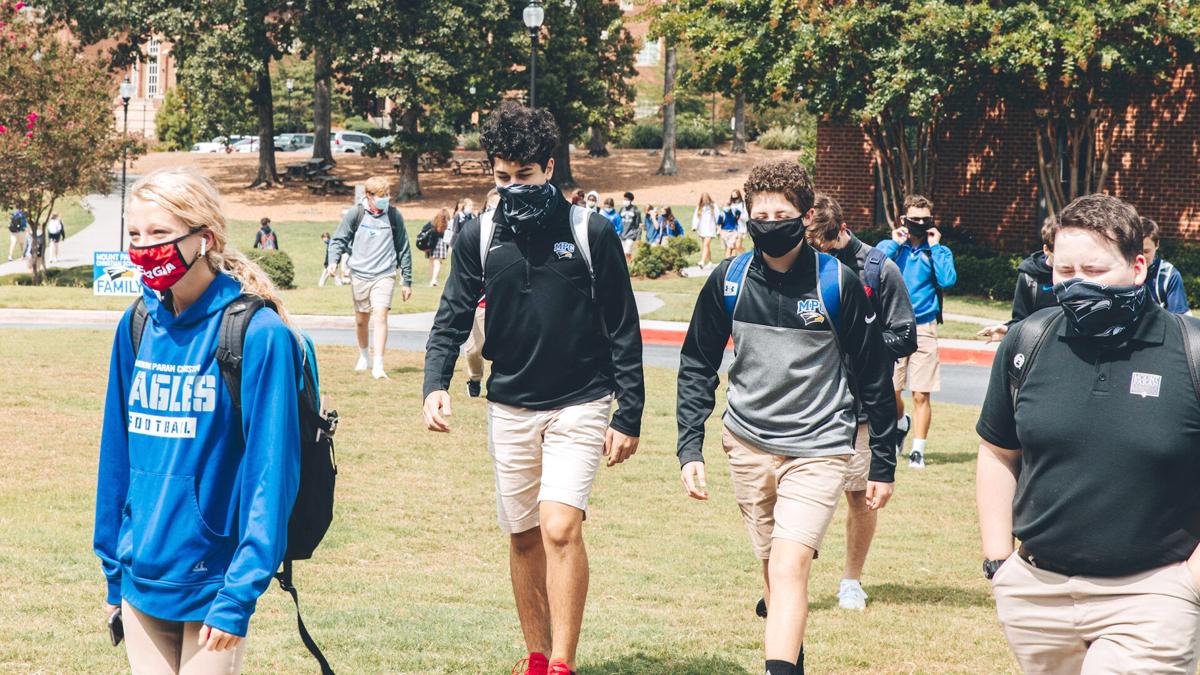 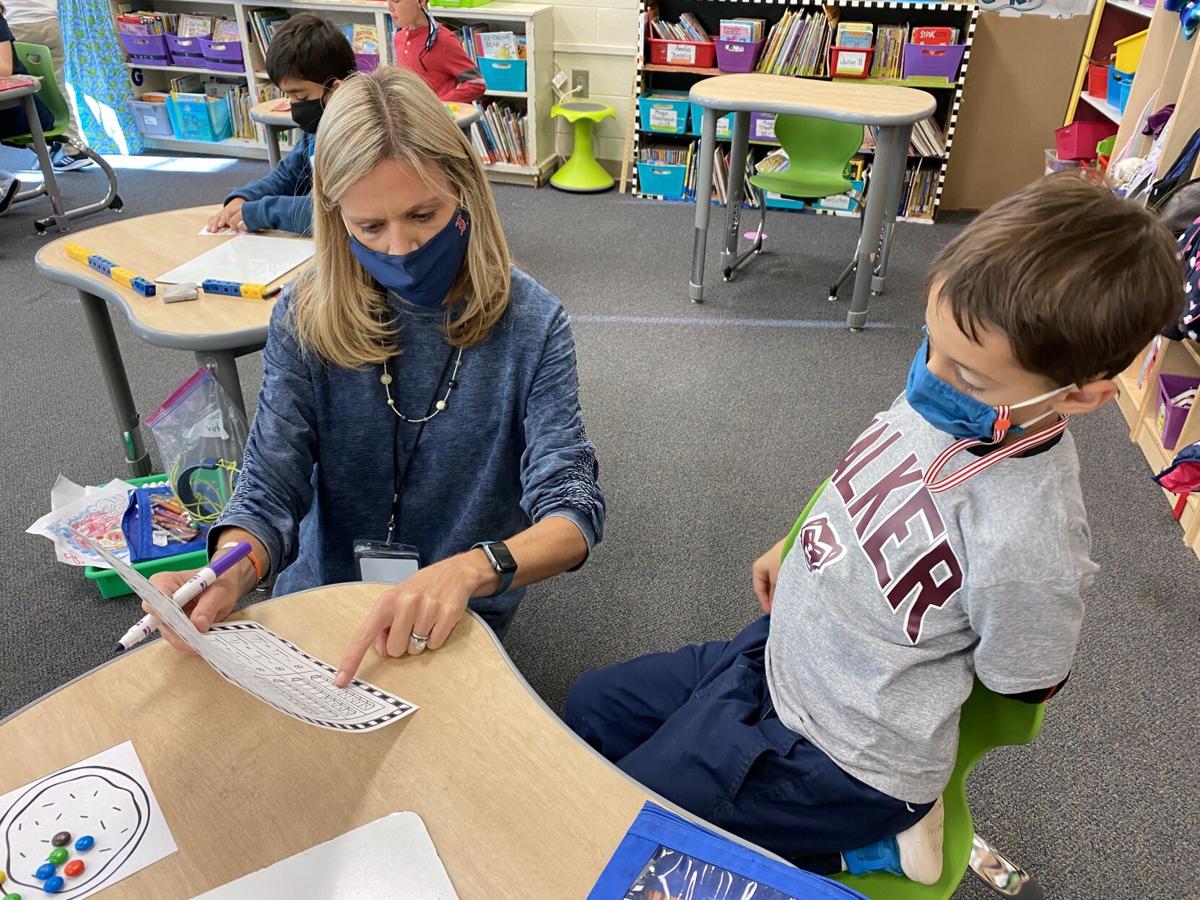 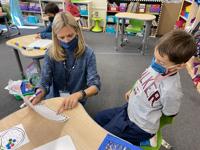 Kara Shenton works with a first grade student at the private Walker School in Marietta. 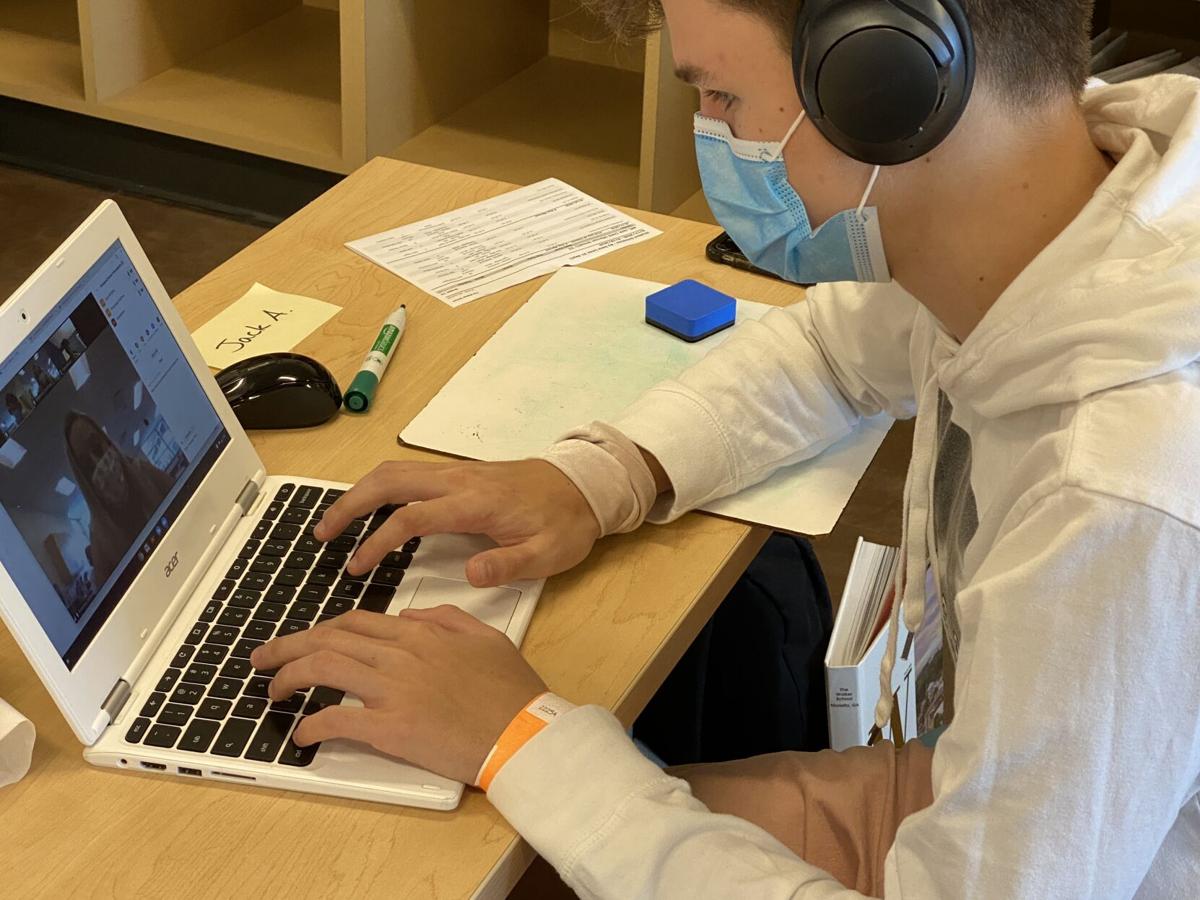 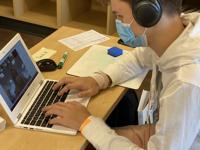 Junior Jack A. works with fellow students during science class. Walker students have the flexibility of attending school in person or via WalkerConnect, the school's interactive distance learning platform. Students who attend remotely are able to hear and see what their teachers are presenting and work with their friends as if they all are in the classroom. 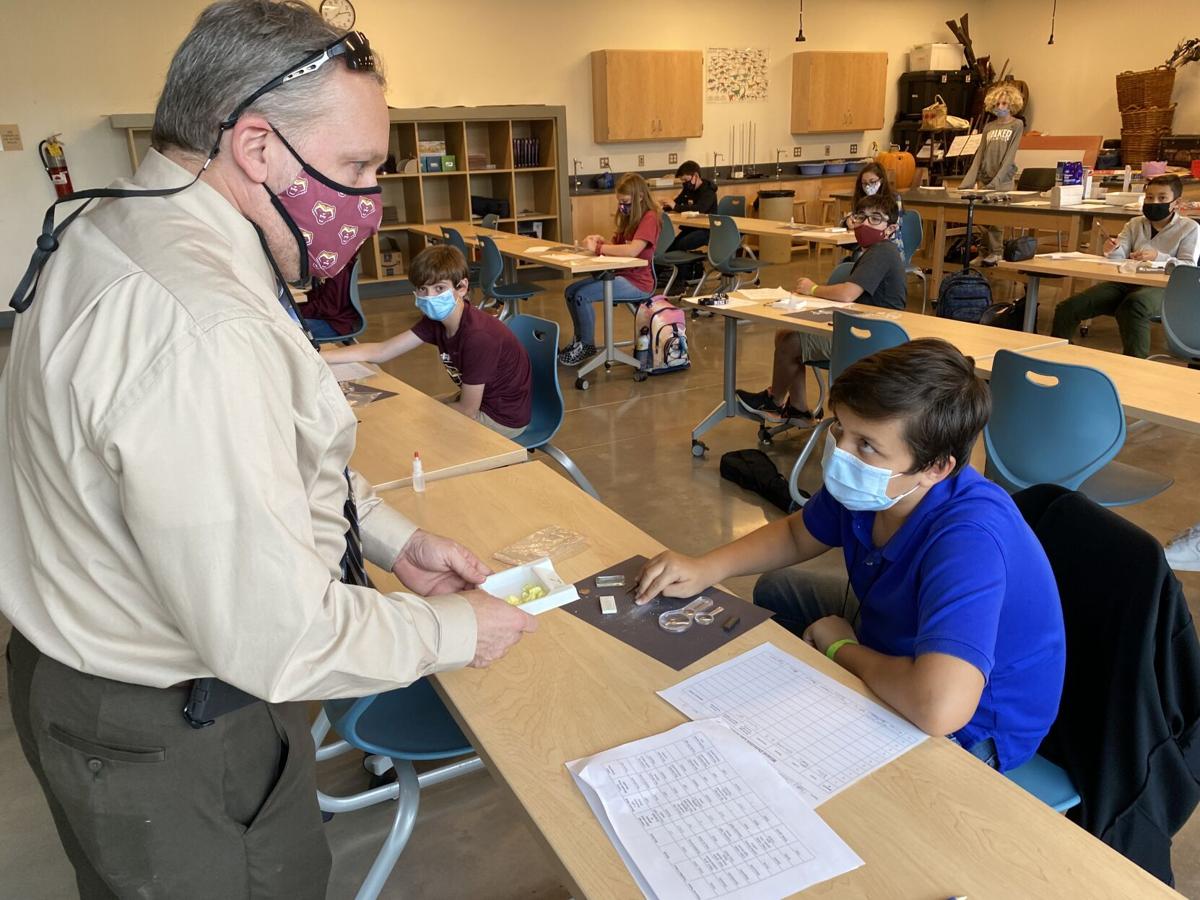 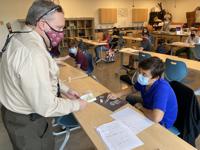 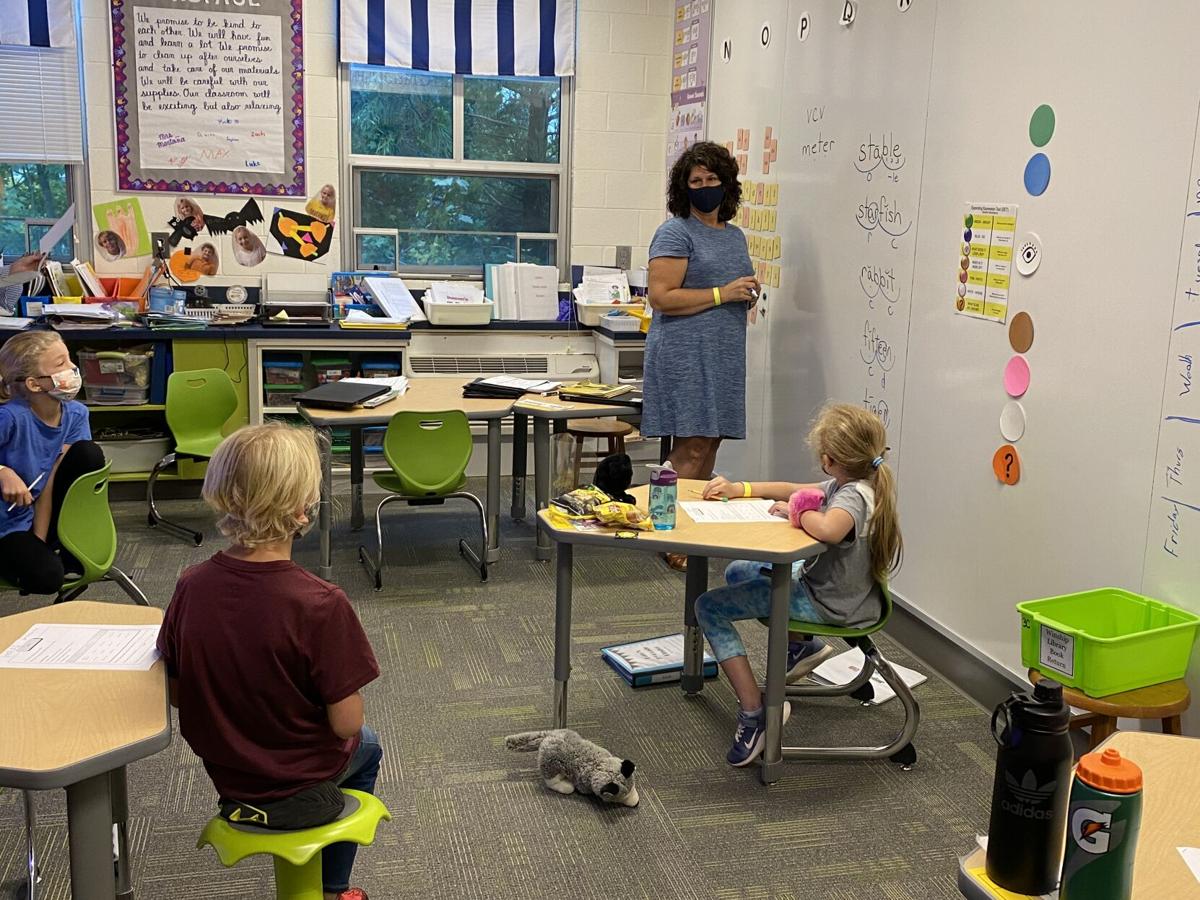 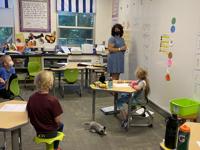 Kara Shenton works with a first grade student at the private Walker School in Marietta.

Junior Jack A. works with fellow students during science class. Walker students have the flexibility of attending school in person or via WalkerConnect, the school's interactive distance learning platform. Students who attend remotely are able to hear and see what their teachers are presenting and work with their friends as if they all are in the classroom.

Among the ways the coronavirus has impacted the local public education systems is a decrease in enrollment.

Cobb County School District counted 4,328 fewer students, a 3.8% drop in October than it did in March when the pandemic began. Marietta City Schools also saw a dip, although a much smaller one of 128 fewer students, or 1.5%.

As both school systems’ enrollment generally mimics the growing population of Cobb County, the question is: Where have these students gone?

At the last official count in October, Cobb Schools had 107,379 students, down from 111,707 in March. A large portion of that drop, according to district officials, comes from kindergarten students who did not enroll this year.

“As is the case with districts across the metropolitan area who have seen FTE drops which range from 2 – 6%, at the beginning of this school year we saw a significant number of incoming kindergarten students elect to ‘redshirt’ and begin kindergarten in August of 2021. As the school year has progressed, day-to-day enrollment and attendance show a large number of those kindergartners are walking back into our face-to-face classrooms,” John Floresta, chief strategy and accountability officer for Cobb County Schools, said in an email. “As the uncertainty surrounding COVID-19 continues, it is too early to anticipate enrollment for the next school year but, as a priority of the Superintendent, we remain committed to providing safe and flexible classroom options for all Cobb families.”

Marietta Schools also saw a drop with 8,599 students enrolled in October, down from 8,727 in March. Unlike in Cobb, Marietta had a higher number of kindergarteners.

“I think we see an impact, but I don’t think it’s a significant impact,” Superintendent Grant Rivera said.

Rivera said families had varying reasons for leaving the district, with some enrolling in private school or transitioning to home-schooling. Still other students from last year moved out of the city.

“Every family had a different reason for leaving Marietta, and every family had a different path to where they were going after Marietta,” he said. “For example, I know some families who left Marietta because their employment came to an end due to something COVID-related, and they had to get out of metro Atlanta. I also know of families who, given the uncertainty of schools, chose to full-time homeschool. I’m aware of families that chose to transition from a public school to private school, because they felt paying tuition would guarantee them that school was more likely to be open.”

Some local students have opted for private schooling.

Private schools saw an increase in applications over the summer as public schools announced plans to start the year virtually. But increased interest didn’t necessarily mean those students attended in the fall, and some schools only had a slight bump or held enrollment about the same.

Mount Paran Christian School near Kennesaw saw a 7% increase to 1,180 students from prekindergarten through 12th grade, said Tiffany Westbrook, communications director at the school. Most of those families were already looking for a Christian school for their children before the coronavirus hit, she said.

“We expect attrition to be low, and already are seeing increased applications, with several grades that will likely be wait-listed,” she said.

The Walker School in Marietta had new families enroll, but intentionally kept their student population the same at about 900, Karen Park, the school’s communications director, told the MDJ. This was in part to keep class sizes small to mitigate the spread of the virus.

“It was definitely a safety factor, for sure,” she said. “You would hate to offer a bunch of families opportunities to come here, but you can’t provide for the safety of their students and for our current students as well.”

Like Walker, St. Benedict’s Episcopal School in Smyrna saw more interest in applying, but kept their enrollment steady at just over 500. The Rev. Brian Sullivan, head of school at St. Benedict’s, said enrollment went up “a small percentage,” but did not give exact figures. He said parents have been interested in the school for its small community environment and its Christian faith, but this year they’ve also seen parent interest in response to the pandemic.

“There have been a lot of parents who’ve been concerned about opening and closing, and our plan for COVID was very clear,” he said. “We were able to stay open almost until the very end of last semester. We’ve been very clear, we’re able to communicate with parents on a more intimate level about what’s going on with numbers, how we’re handling it and we can get feedback.”

At St. Joseph Catholic School in Marietta, enrollment is up overall, school spokesperson Ann Frazer told the MDJ, though exact figures weren’t available. Much of the increased interest they saw was from families in public schools, she said.

“Here, at SJCS we saw an influx of applications in late July once parents realized that Cobb County was starting the school year on a virtual platform only,” she said in an email.

“I also received many calls from families interested in moving their students to SJCS because we were offering in-person instruction. The feedback I have been receiving from prospective parents is that it is just too hard to juggle work and school from home and that some of the online platforms being offered by schools are not sufficient for their children.”

Some families became more interested in homeschooling this year. Freya Fitzpatrick, founder of The Homeschool Consortium in Kennesaw, said while her cooperative’s student population has stayed around 75, some of them joined because it’s a program where she and other teachers give classes in-person, and she’s gotten several calls in recent weeks from people who heard about her classes.

“We got quite a few new families that are with us this year because we offer in person,” she said.

John Grimes, who runs a homeschooling Facebook group, saw the group triple in size to about 1,200 this year, he said.

“We had the mandatory homeschooling in the spring semester last school year, but I think a lot of families are continuing that. Maybe they’re just trying to clear the pandemic, or maybe they’re finding they like it and want to stick with it,” he said.

AROUND TOWN: Cobb elects a new delegation chair, Cupid on the BoC retreat

Who should be the official poet laureate of Athens? Here's where to send your nomination.