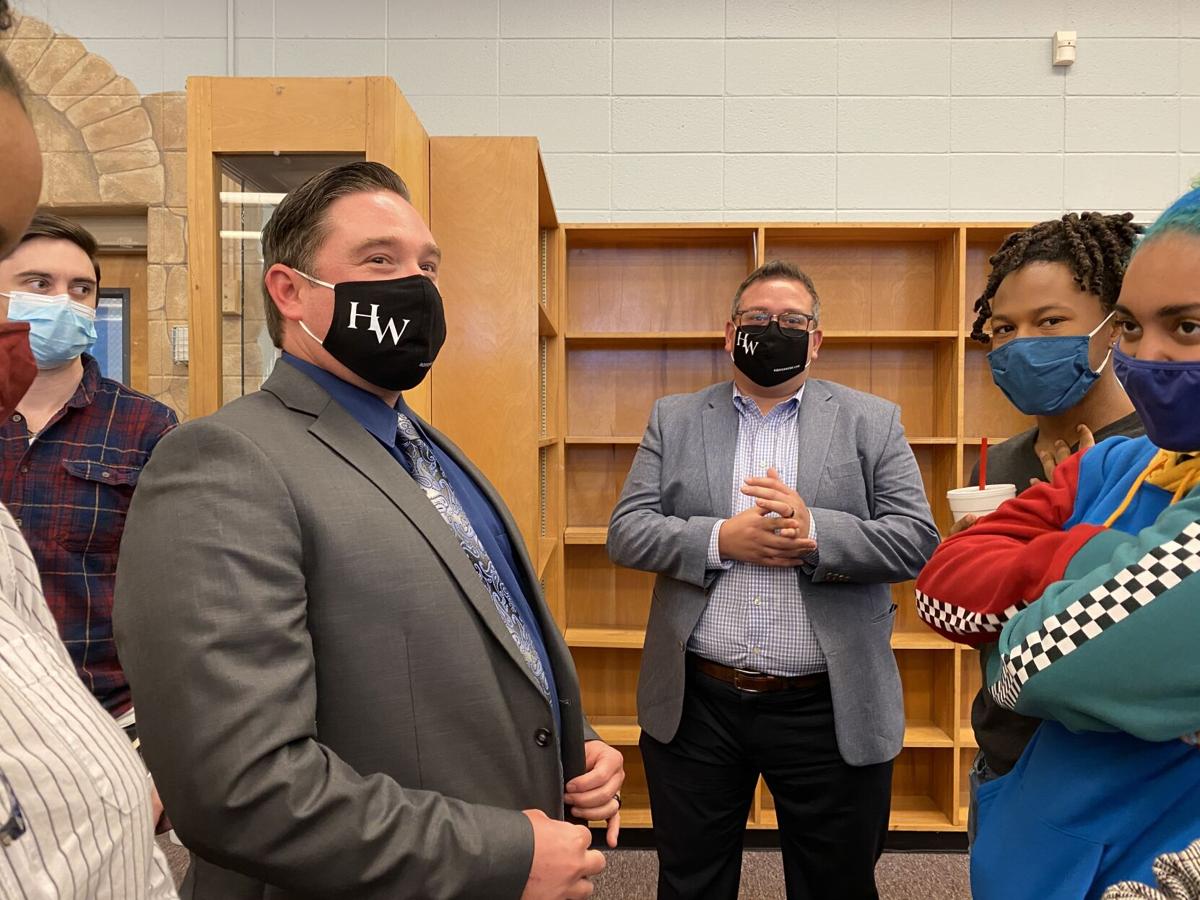 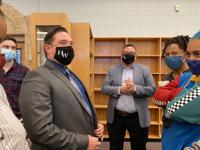 Drama teacher Spencer Jordan, left, celebrates with students Oct. 6 after a tribunal decided against recommending the termination of his contract. 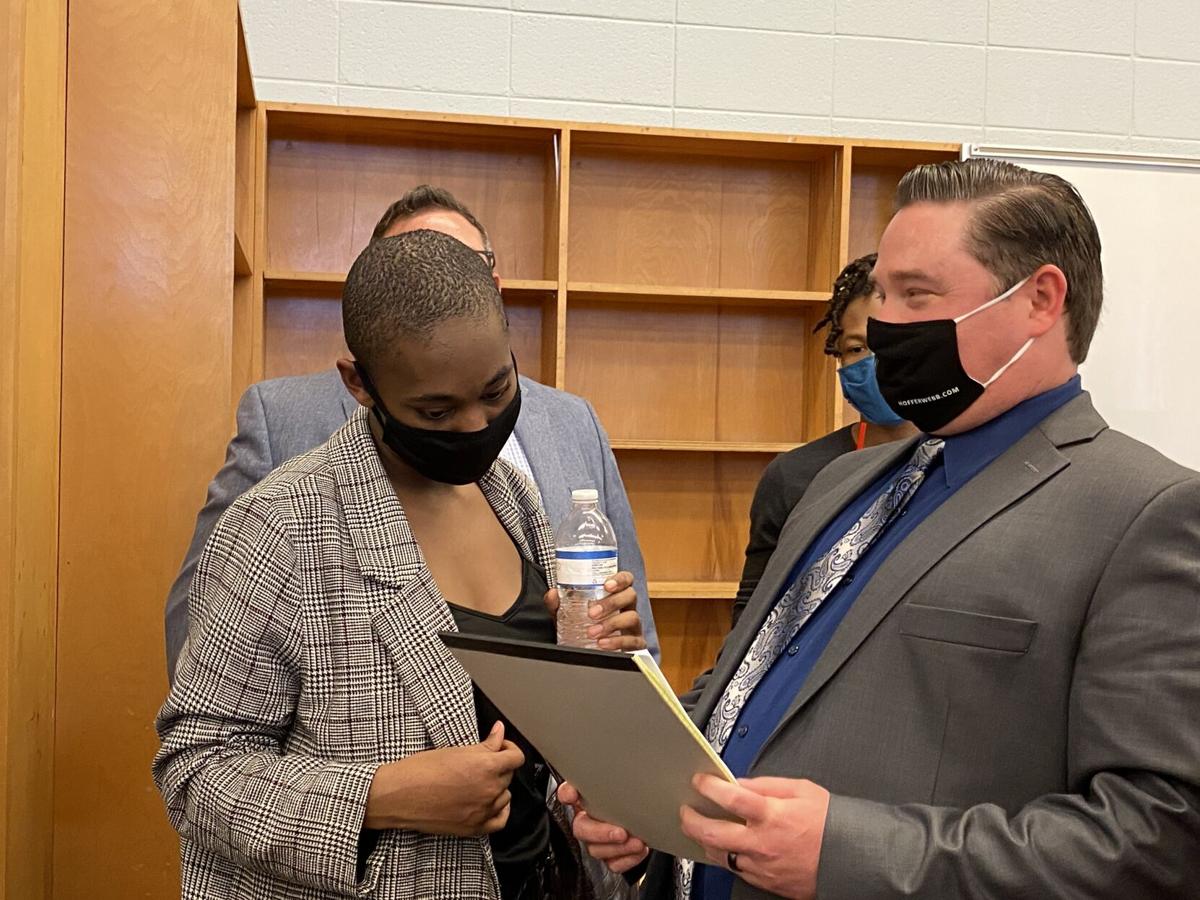 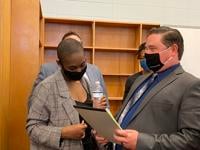 Drama teacher Spencer Jordan, right, celebrates with students after a tribunal decided against recommending the termination of his contract.

Drama teacher Spencer Jordan, left, celebrates with students Oct. 6 after a tribunal decided against recommending the termination of his contract.

Drama teacher Spencer Jordan, right, celebrates with students after a tribunal decided against recommending the termination of his contract.

A veteran Cobb County teacher will keep his job but face a temporary suspension more than a year after the district placed him on administrative leave.

Spencer Jordan, a drama teacher with 21 years of experience at Campbell High School, took a student to his home in September of 2019, an action the district said was a policy violation. On Thursday, the Cobb school board voted 6-0 to uphold a recommendation from a tribunal to suspend Jordan without pay for five days.

According to the three-person tribunal panel, Jordan violated district policy by taking a student off campus without written permission from a parent or guardian.

“After considering the findings and fact of the tribunal, the board upholds the recommendation of the tribunal that Mr. Jordan should be suspended without pay for five days,” said board member Jaha Howard.

The board approved the suspension with board member David Morgan absent.

Earlier this month, Jordan and school district lawyers participated in a hearing before a three-person tribunal panel to determine whether the teacher violated district policy by taking a student to his Forsyth County home. During the hearing, district lawyers said Jordan’s conduct constituted immorality and a willful neglect of duties, and they argued his contract should not be renewed.

Jordan, who was the student’s drama teacher at Campbell, said the student approached him on Sept. 9, 2019, with concerns and fear about going to his own home after having an argument with his mother about attending church the previous day. According to Jordan, the student feared he could be kicked out of his family’s home because he identified as bisexual.

The following day, the district placed Jordan on administrative leave.

Robyn Webb, Jordan’s lawyer, said the Campbell teacher acted to help a student in need. According to Webb, Jordan spoke with the school’s guidance counselor three times after the student approached him on Sept. 9 to ensure that he would not be violating district policy if he took the student home. Jordan believed the counselor had contacted the student’s mother and received permission for him to take the student home.

A former investigations manager for Cobb Schools, Erika Owen, testified during last week’s hearing, saying that the student went to Jordan’s home after school hours without the permission of a parent. Owen said nobody reached out to the listed contacts on the student’s emergency contact form.

“Those are the adults that should have been contacted, said CCSD lawyer Randall Farmer, “but never were.”

Webb said Jordan has a “squeaky clean” personnel file, and about half a dozen Campbell parents and former students testified on behalf of Jordan’s character during last week’s hearing.

According to Georgia law, the school board can designate a tribunal of between three and five “impartial persons possessing academic expertise to conduct the hearing and submit its findings and recommendations to the local board for its decision.”

The three-person tribunal recommended the district suspend Jordan for five days, but they did not affirm the district’s recommendation to terminate Jordan’s contract.

The board did not state if Jordan will return to Campbell or teach elsewhere in the district.

Personnel MovesThe board voted unanimously to approve a trio of principal-level personnel moves on Thursday night.

Broadnax will replace Ford Principal Patrick O’Connell, who is resigning from his position effective Jan. 1, 2021.

With a composite score of 24.4 this year, Fulton County Schools’ students broke a record with the highest score in the district’s history.

Police seek to arrest student who beat man and recorded it

This community has the worst quality of life in Georgia, study finds