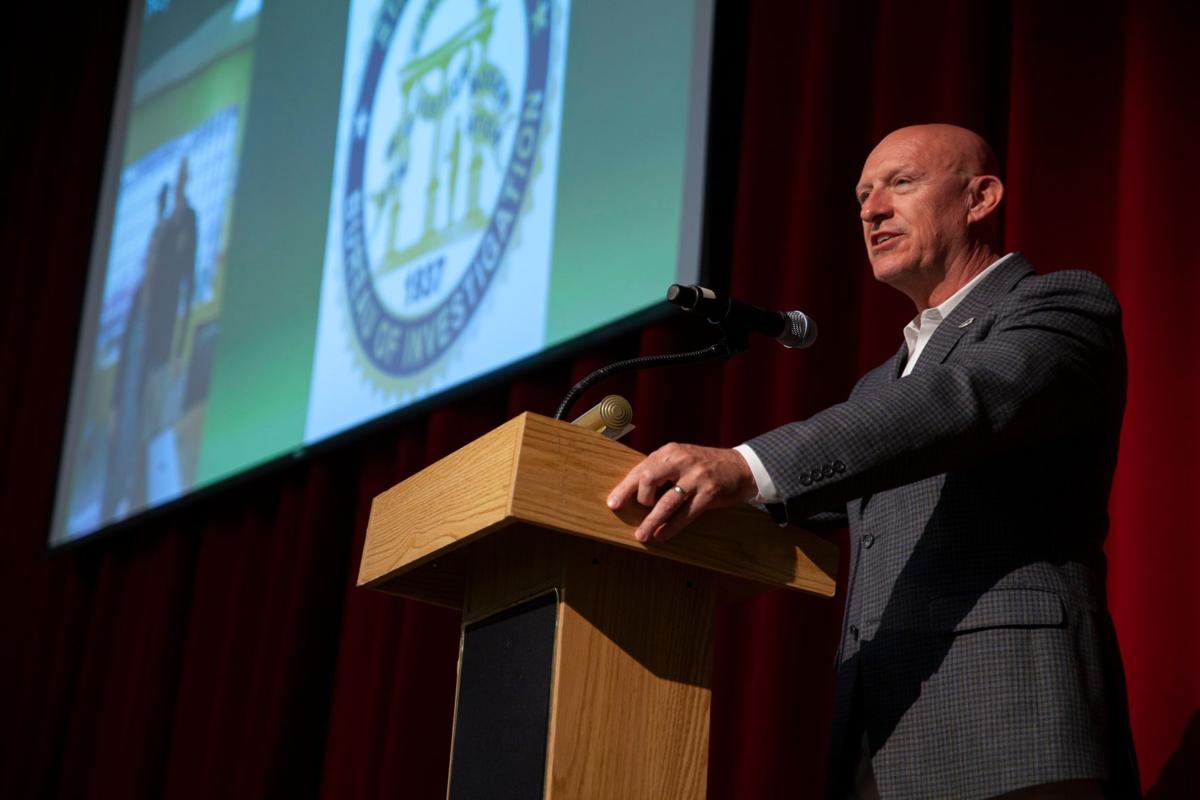 Vic Reynolds, director of the Georgia Bureau of Investigation, applauded Cobb County on Thursday for its addiction and recovery resources. 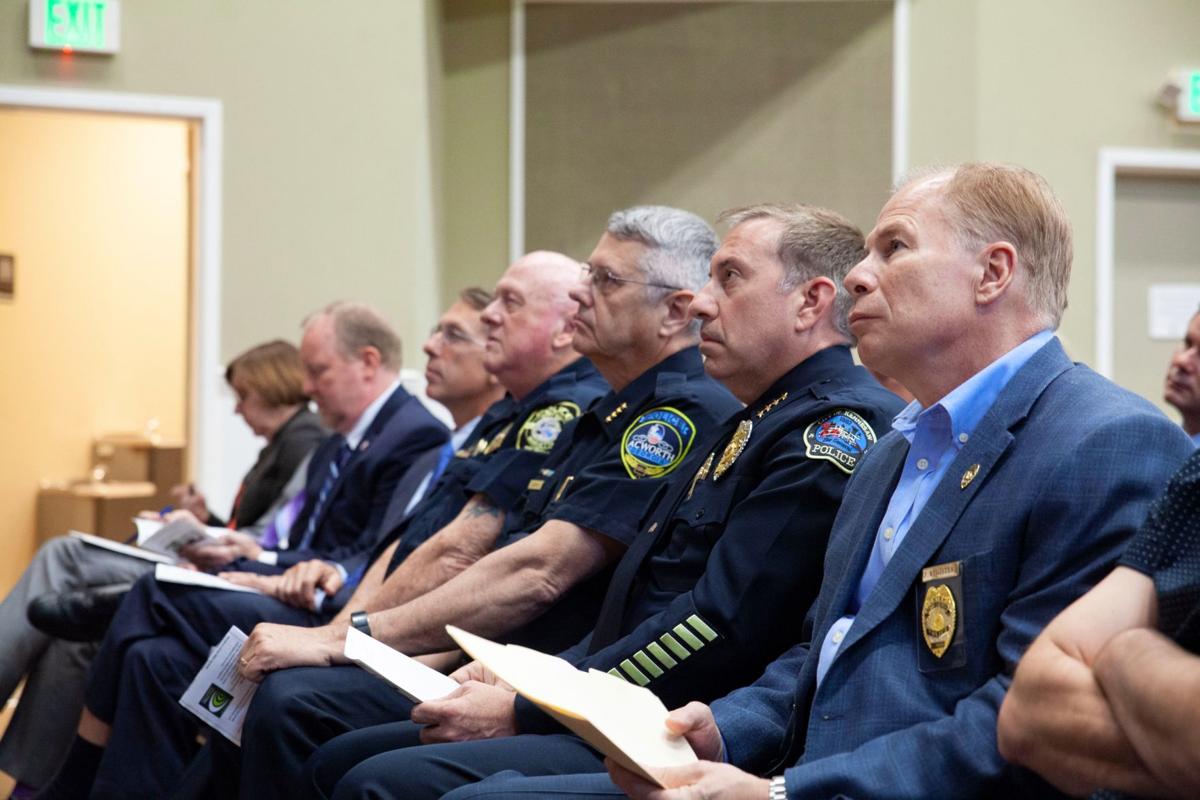 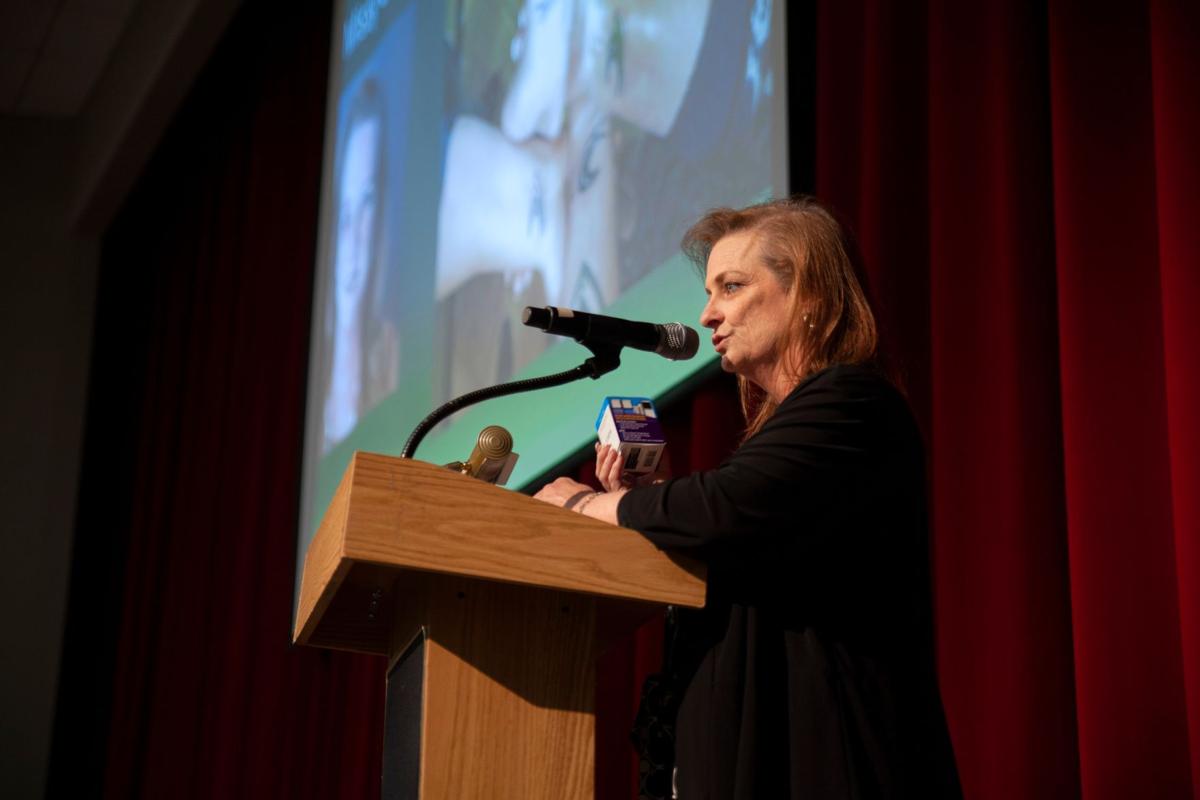 Missy Owen, CEO of the Davis Direction Foundation, speaks to the importance of collaborative community efforts to combat drug addiction and promote recovery. 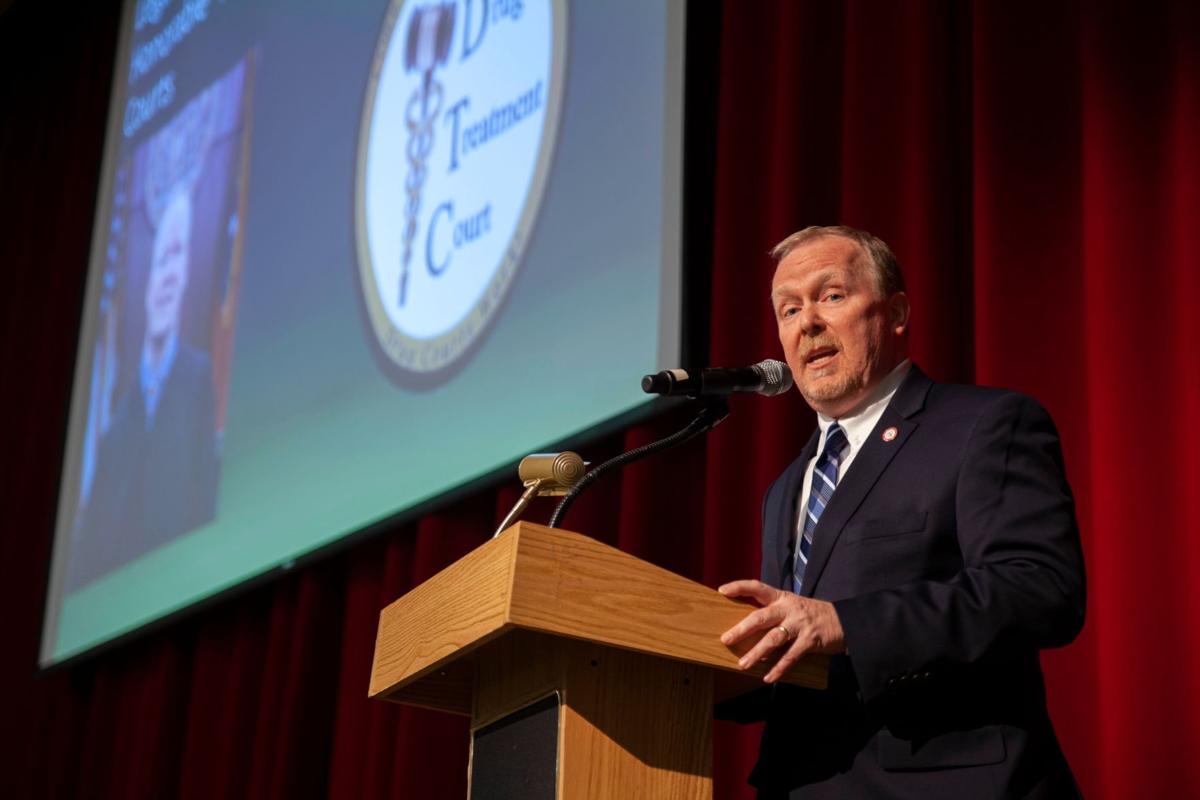 Judge 'Tain Kell, of the county's drug accountability courts, speaks to Cobb residents on Thursday about the benefits of addiction programs over jail time. 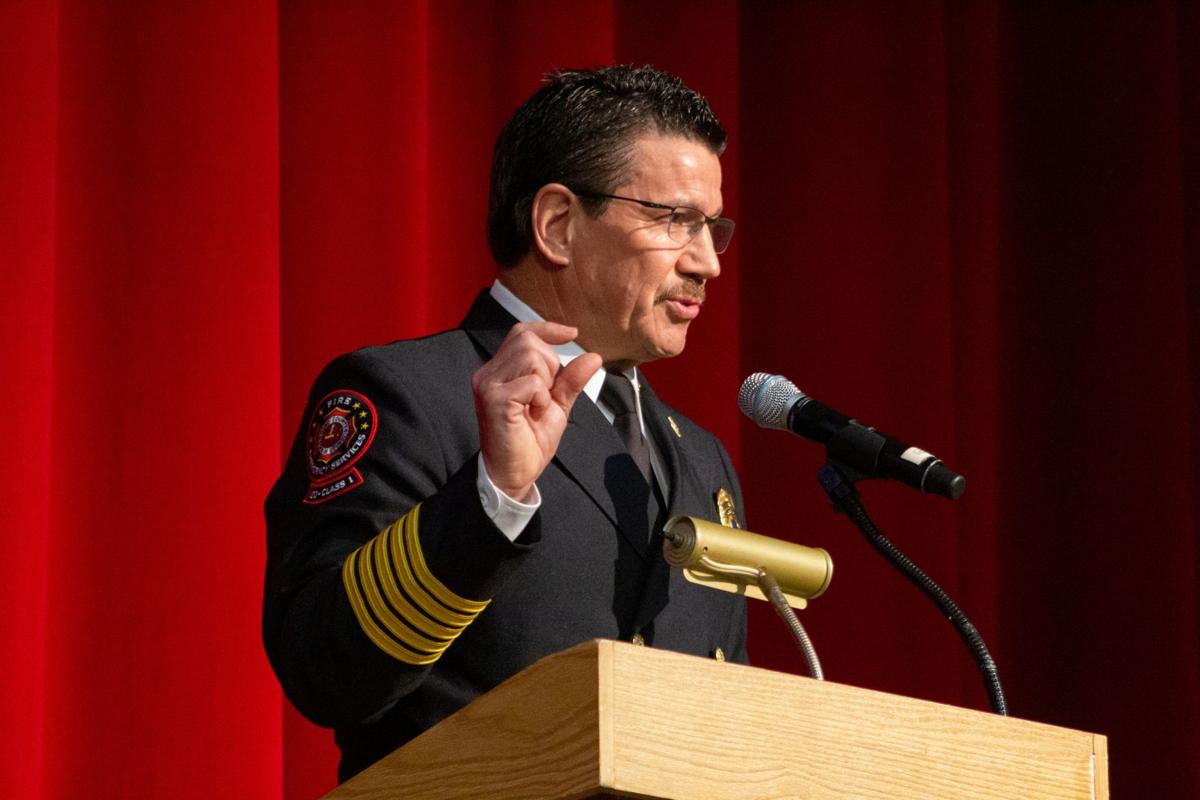 Cobb Fire Chief Randy Crider tells a group of Cobb residents and leaders on Thursday about his son's struggle with addiction. 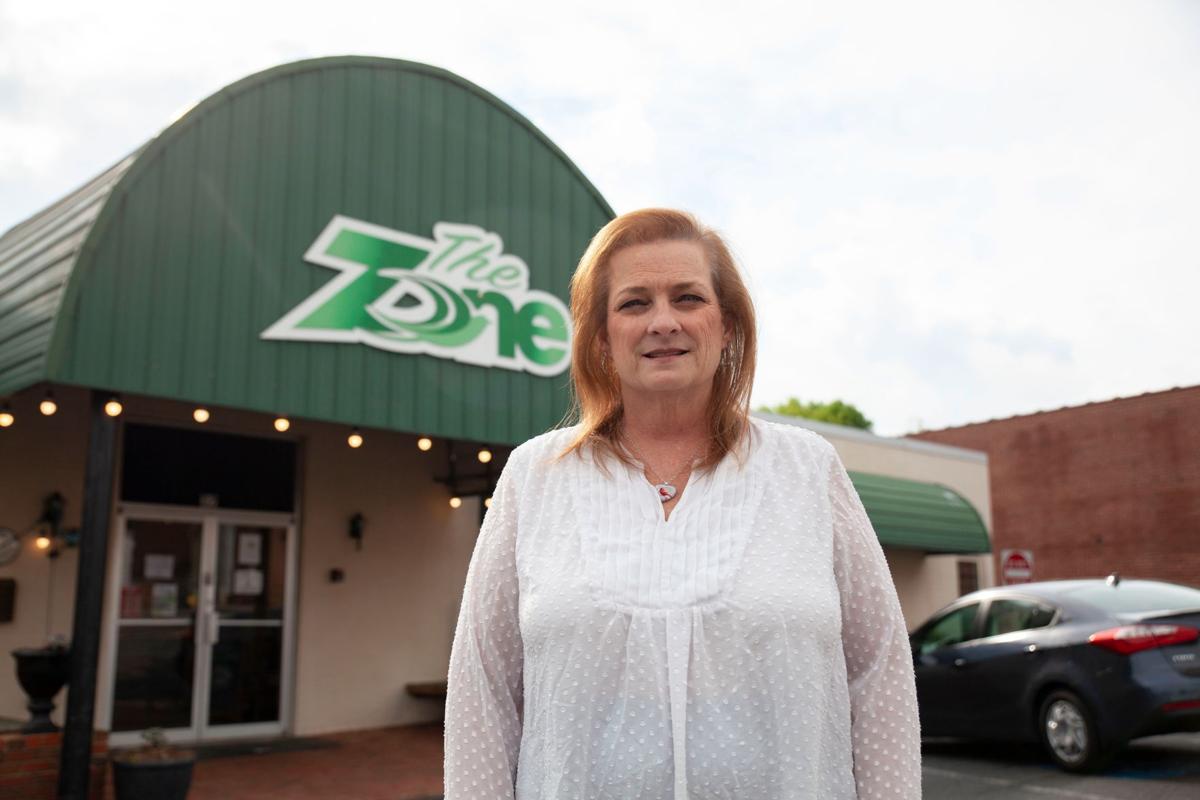 Missy Owen, CEO of the Davis Direction Foundation, stands outside The Zone in Marietta. 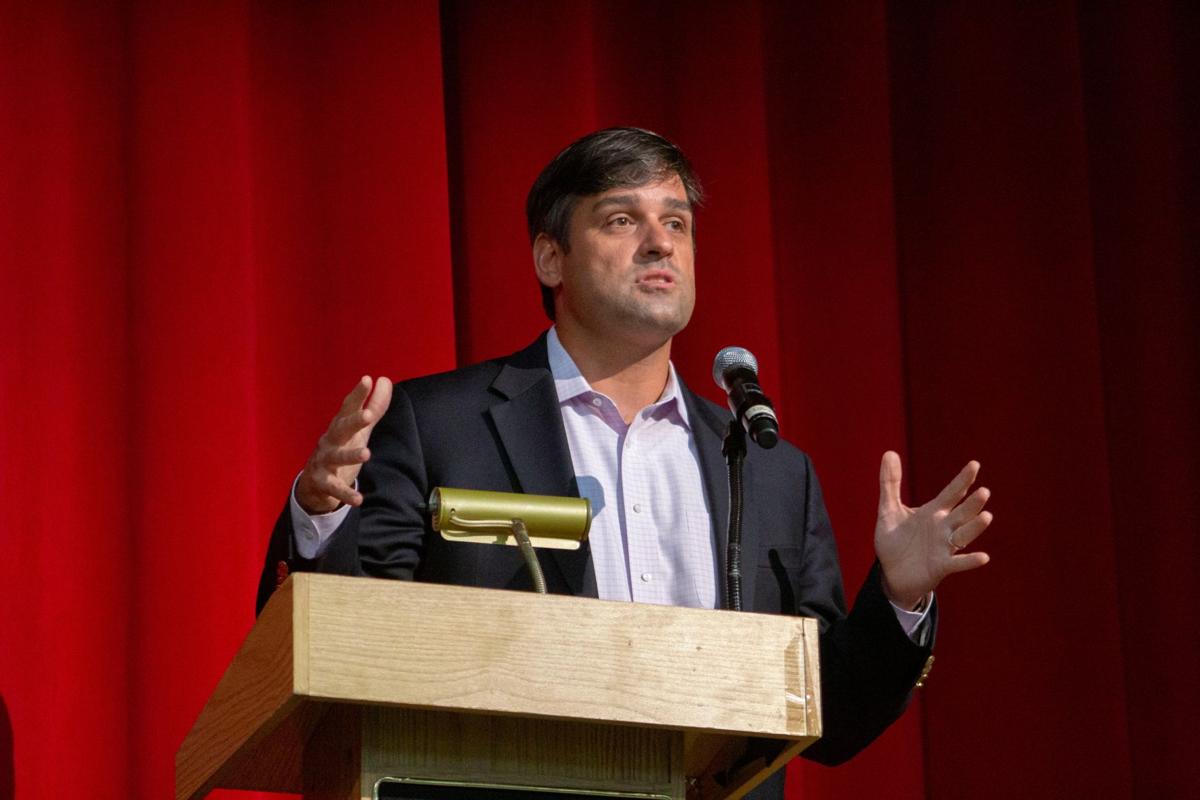 Grant Rivera, superintendent of Marietta schools, speaks to a group of Cobb residents on Thursday about the importance of drug prevention and recovery education in grades K-12.

Vic Reynolds, director of the Georgia Bureau of Investigation, applauded Cobb County on Thursday for its addiction and recovery resources.

Missy Owen, CEO of the Davis Direction Foundation, speaks to the importance of collaborative community efforts to combat drug addiction and promote recovery.

Judge 'Tain Kell, of the county's drug accountability courts, speaks to Cobb residents on Thursday about the benefits of addiction programs over jail time.

Cobb Fire Chief Randy Crider tells a group of Cobb residents and leaders on Thursday about his son's struggle with addiction.

Missy Owen, CEO of the Davis Direction Foundation, stands outside The Zone in Marietta.

Grant Rivera, superintendent of Marietta schools, speaks to a group of Cobb residents on Thursday about the importance of drug prevention and recovery education in grades K-12.

A who’s who of top Cobb and state leaders in education, law enforcement, the judicial system, local government and behavioral health discussed the country’s growing drug crisis and the collaboration and understanding they said it takes to address the problem locally.

Overdose deaths in Georgia increased by 245% from 2010 to 2017, resulting in an increase of 426 to 1,043 deaths, according to data from the Georgia Department of Public Health.

“There is some good news, which is in 2018, our overdose deaths dropped,” Gulledge said. Gulledge’s office reported 131 drug deaths in 2018.

“He had been to rehab, he had come home, but there was no after-care in this county. There was nowhere for anybody to go and get help that was free, that was available when you needed something (and) not just when there was a meeting scheduled,” she said.

Commissioner Ott highlighted the county’s efforts to educate the public and teach adults to recognize the signs of drug use in teens and children. He said the county’s Cobb Overdose Prevention Effort House, or C.O.P.E House, in particular provides an opportunity to spot the signs of drug use. The house is available for booking for citizens 18 or older to explore the trailer outfitted to look like a teen’s bedroom, bathroom and closet.

The mobile classroom provides more than 50 items on display that could be clues suggesting drug use. Those in long term recovery give tours to the public. For more information, visit www.cobbcounty.org, click “Board of Commissioners” on the right of the page, scroll down and select the article “Cobb Overdose Prevention Efforts.”

Educators from local school systems, as well as from Kennesaw State University, highlighted the importance of teaching both drug prevention and recovery to students, starting at a young age.

Rivera said discussions about prevention and recovery should carry through K-12 education, and talking about both openly is the only way to admit there is a problem in the community and begin to address it.

Rivera said the Marietta school system is partnering with the Davis Direction Foundation to develop age-appropriate curriculum at all levels of education.

Lawson echoed Rivera, adding that the Cobb School District’s curriculum includes drug education starting in middle school. She said the district offers counseling for students K-12, and has various drug and alcohol awareness programs in place, highlighting the “importance of living drug and alcohol free.” She also said special programs and awareness campaigns line up with celebrations and holidays like prom and spring break.

Teresa Johnston, director of Kennesaw State University’s Center for Young Adult Addiction and Recovery, said transitioning to higher education can provide added challenges. Johnston said with more prevalent drug and alcohol use and less direct family support, college can be “a hostile environment to someone who is in recovery.”

One way to encourage recovery, she said, is to reduce the stigma surrounding addiction. KSU students who self-identify as needing help, Johnston said, have access to scholarships, recovery resources, academic advising, counseling and more through the center.

“If we don’t research recovery and understand how people sustain their recovery and feed that back into the prevention side, I think we’re missing an opportunity,” she said.

First responders, judges: Jail is not the answer

“I’ve got a 31-year-old who is an addict ... I’m still proud of my son, because I know his heart. He is a good guy who has a problem,” Crider said. “I’m excited to see that public safety and other business leaders and city and county leaders are teaming together to have a significant impact on the overdose issue in Cobb County.”

Thanks to community organizations and members who helped his son, Crider said the 31-year-old is now one year clean.

Crider also said in the past year, the emergency personnel have administered 130 doses of Narcan, a lifesaving drug that essentially reverses a drug overdose. He said that number shows an improvement from the more than 200 doses administered in 2016.

Police Chiefs Dan Flynn, Wayne Dennard, William Westenberger and Mike Register, of the Marietta, Acworth, Kennesaw and Cobb County police departments respectively, spoke to the fragile relationship of police with drug users. The chiefs agreed that sending drug users to jail over and over accomplishes nothing.

Flynn said police departments “tend to look at anybody violating the law as a criminal.

“But we’ve come to know over the last two years, and we’ve really educated our law enforcement community here in understanding that an addict, a drug addict, is not inherently a criminal,” he said. “When you understand that they have an addiction ... then you don’t need to insist immediately that they go into jail.”

Flynn and the other law enforcement leaders agreed the traffickers are the real criminals, and there are alternative programs that focus more on recovery and rehabilitation for those who need recovery.

Cobb Superior Court Judge Tain Kell, who works in Cobb’s drug accountability courts, pointed to the success of programs that give low-level drug offenders a second chance. Kell said accountability courts are an important “tool in the toolbox” in the fight against drug overdoses.

“There’s a famous saying that says, ‘If the only tool in your toolbox is a hammer, every problem starts to look like a nail.’ Well, 12 years ago when I came onto the bench, we were hammering that nail day and night ... and that hammer was putting people in jail,” he said. “That does not cure drug addiction.”

Kell said sending addicts to jail creates a cycle of drug use and jail time, while programs like accountability courts give judges the discretion to decide if the person standing in front of them needs help. He said while the courts save taxpayer money, they more importantly give people the opportunity to “break the cycle of addiction.”

GBI Director Reynolds closed the night’s event by reiterating a message of understanding and redemption, adding that Cobb County should be an example for others in the creation of addiction resources.

For more information on the Recovery Roundtable Leadership Council or the Davis Direction Foundation, visit www.davisdirection.org.

CDC says no to trick-or-treating