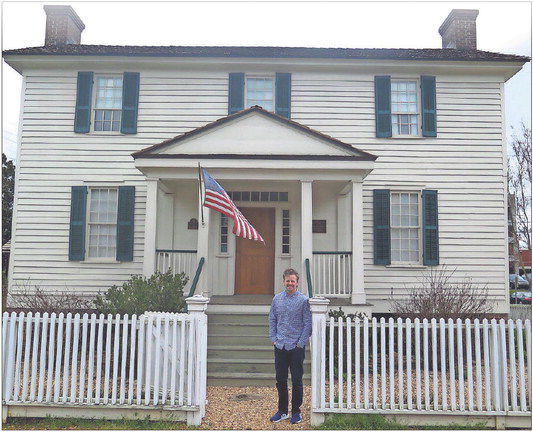 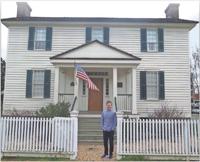 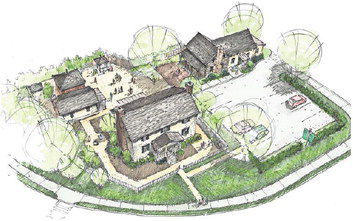 A rendering of the expansion the Cobb Landmarks and Historical Society planned for the William Root House property on North Marietta Parkway. Expected to be complete by 2020, the expansion includes the addition of a 1830s-era cabin structure, a historic smokehouse and renovations to the Root House. / Special to the MDJ-Courtesy Cobb Landmarks and Historical Society 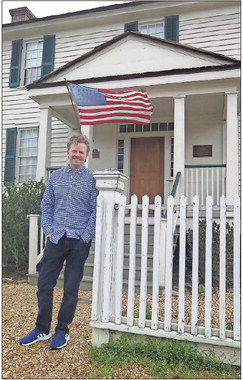 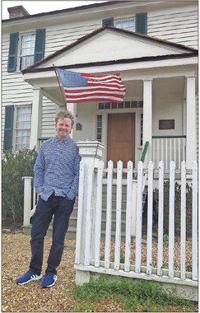 Trevor Beemon, executive director of the Cobb Landmarks and Historical Society, stands in front of the historic William Root House, which is home to the society’s main museum. Beemon is leading a campaign to expand the campus of the Root House and increase the organization’s offerings. / Staff-Emma N. Hurt

A rendering of the expansion the Cobb Landmarks and Historical Society planned for the William Root House property on North Marietta Parkway. Expected to be complete by 2020, the expansion includes the addition of a 1830s-era cabin structure, a historic smokehouse and renovations to the Root House. / Special to the MDJ-Courtesy Cobb Landmarks and Historical Society

Trevor Beemon, executive director of the Cobb Landmarks and Historical Society, stands in front of the historic William Root House, which is home to the society’s main museum. Beemon is leading a campaign to expand the campus of the Root House and increase the organization’s offerings. / Staff-Emma N. Hurt

When Trevor Beemon took charge in 2014, the forty-year-old Cobb Landmarks and Historical Society was at a crossroads.

In 2013 just 1,100 people visited its main museum, the William Root House. Following the recession, staff had shrunk to bare bones and there was talk of making the museum open by appointment only.

“Money was tight. It was rough,” Beemon said.

The Acworth resident recalled that the group, like many other local house museums, had a choice to make: “It’s a leap of faith to say okay, things aren’t going well. Do we start closing things down? Or do we jump up and start going crazy, offering tons of different stuff?”

They decided on the latter.

After taking the executive director position, he has led a successful rejuvenation of the house museum on North Marietta Parkway, physically and socially. Now they are launching the next phase: building out a historically-driven campus for all of Cobb County to use.

Since 2014, Beemon and his team of part-time staff have tried experimental events such as a keg party with Red Hare beer brewed from hops and herbs in the Root House garden, putting the house in eerie traditional mourning for a Root relative in October and staging a Union occupation for a weekend in July, complete with soldiers. Last year, Root House attendance nearly hit 3,500.

“My idea is to try to make these like movie sets that people can walk into and experience,” he said.

Beemon began volunteering at Marietta’s oldest house, built circa 1845, when he was 12. After studying history at Kennesaw State University, he took a job at the Atlanta History Center and watched that organization’s renaissance happen.

“We took [the Atlanta History Center] from a fusty, musty, old museum and turned it into something more relevant to younger people,” he said. “I wanted to do that [at Cobb Landmarks] because this organization meant so much to me growing up. I loved this house; I loved what they did.”

By 2016, it was clear the organization needed to expand physically to keep evolving.

“We’ve pushed this house to the max. There’s only so much that a house like this can handle,” he said.

The house has just one toilet accessible through a tiny kitchen, making large events a challenge.

Then, with great timing, the Manning family decided to donate a 1830s log cabin it had preserved near Powder Springs, a large donation came in from Terri and Steve Cole and Root family members dropped off boxes of artifacts and papers that could go on display in new space. There was suddenly a clear path forward for growth.

What has become Cobb Landmarks’ $600,000 “Next Generation” campaign has just $150,000 left to raise. With the funding, the Root House will gain a larger campus by 2020. The property will include the Manning cabin offering exhibit and event space, which will attach to a new building with conference, kitchen and office space. A historic smokehouse from downtown Acworth has also been acquired and will be reconstructed in the larger, more open gardens.

In keeping with their “fierce” commitment to authenticity, Cobb Landmarks is scaling the smokehouse down to match the dimensions of a similar structure once on the property, and they will stage the second floor of the Manning cabin to match that of the living space for the domestic slaves that lived with the Roots. He highlighted that over 40 percent of Marietta’s population was enslaved in the mid-19th century, something that has been left out of the narrative in the past.

“There is nothing more special than going into a place and feeling your sense of place. The Next Generation project will provide the opportunities to make this available to everyone in Cobb County,” said Terri and Steve Cole of Marietta in a joint statement. “When the citizens of a community feel a connection with their environment, they will inherently help to protect it and help it prosper.”

Cobb Landmarks is benefitting from a new appreciation for authenticity and history in Marietta, Beemon said. People are craving a sense of community and have understood what historical preservation can do to property values. Several neighborhoods have voted to make their communities historical districts, including Kennesaw Avenue, Church Cherokee Streets and Forest Hills.

“Cobb Landmarks was built on those ideas back before they were cool,” Beemon said.

He has big dreams for how Cobb residents can use the new campus, from walking through the gardens after visiting the future Marietta Square Market to historical window glazing and calligraphy workshops; from boutique weddings to conference room rentals and local meetings.

Cobb Landmarks is “often a behind-the-scenes resource for local cities and homeowners” in terms of educational opportunities and event space, said Jeanine Harper, the outgoing chair of its board. The Kennesaw resident believes that will increase with the new building.

“This is a different organization than it was even 7 to 10 years ago. People are receptive to it,” Beemon said. “Once we have this venue, I think the sky is the limit for our organization.”

The William Root House Museum & Garden, 80 North Marietta Parkway in Marietta, will be hosting their annual plant sale on April 28 from 9 …

Chris Rickert: SOS: Poynette couple to get grill on, refund