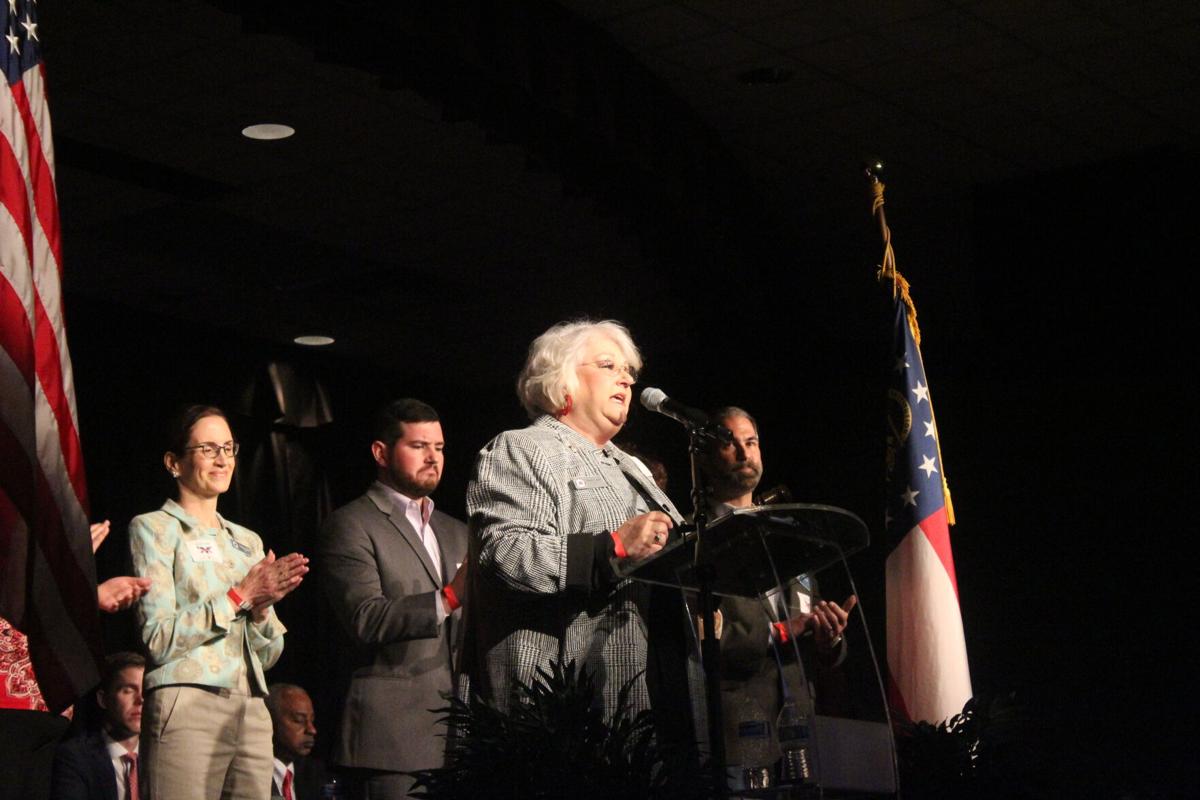 Businesswoman Salleigh Grubbs was chosen as the new chair of the Cobb GOP on Saturday. 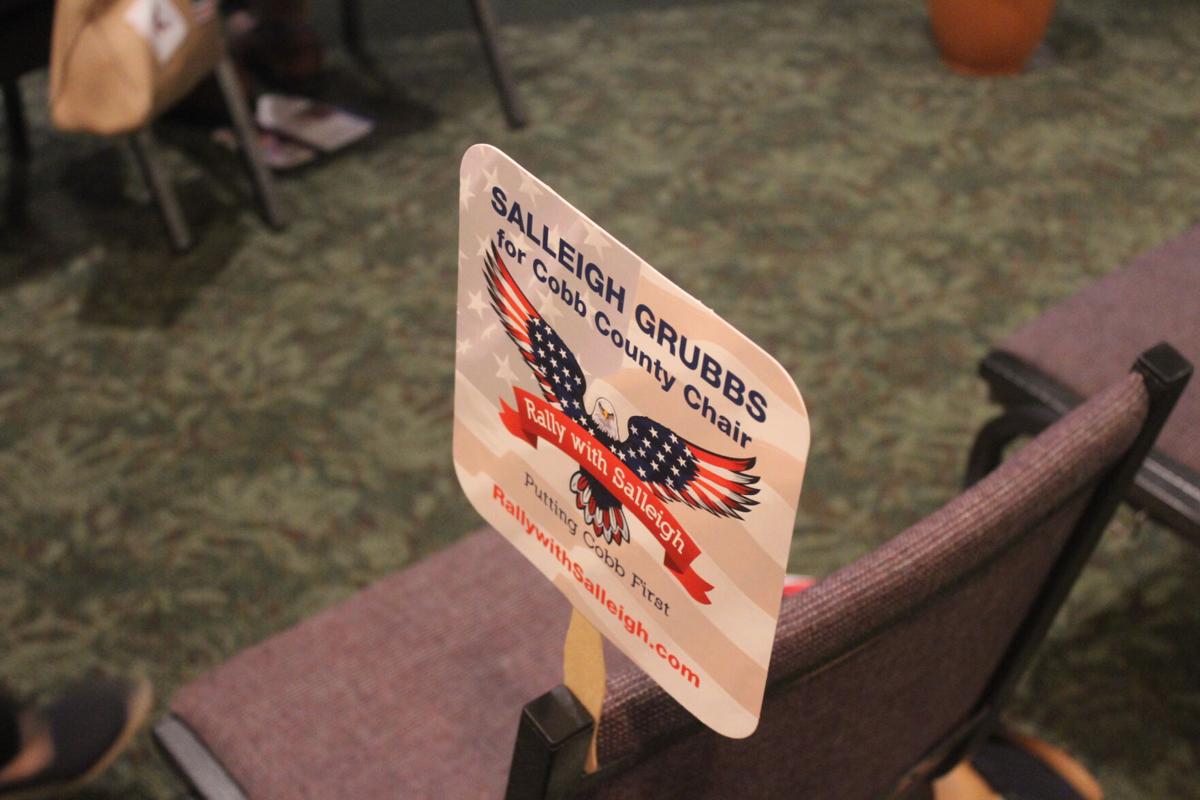 Salleigh Grubbs took more than 50% of the vote in the three-way race, avoiding a runoff. 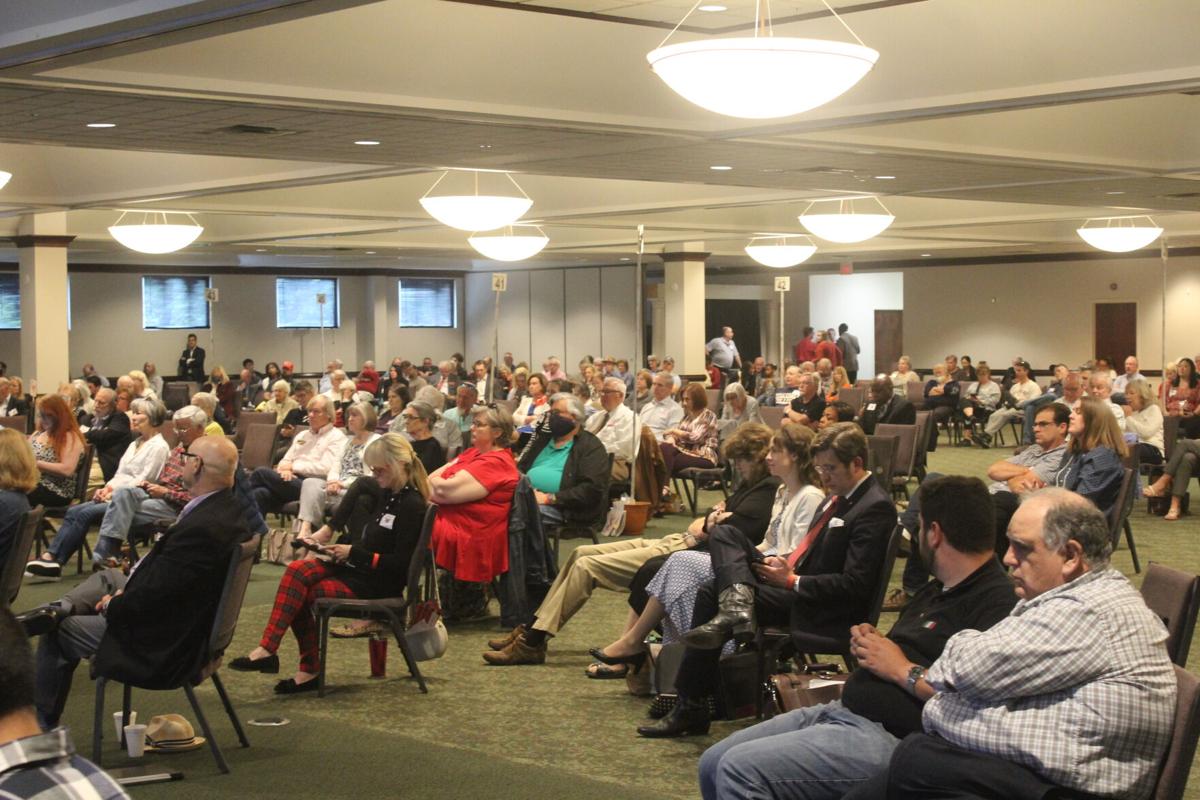 The Cobb GOP's 2021 convention was at Roswell Street Baptist Church. 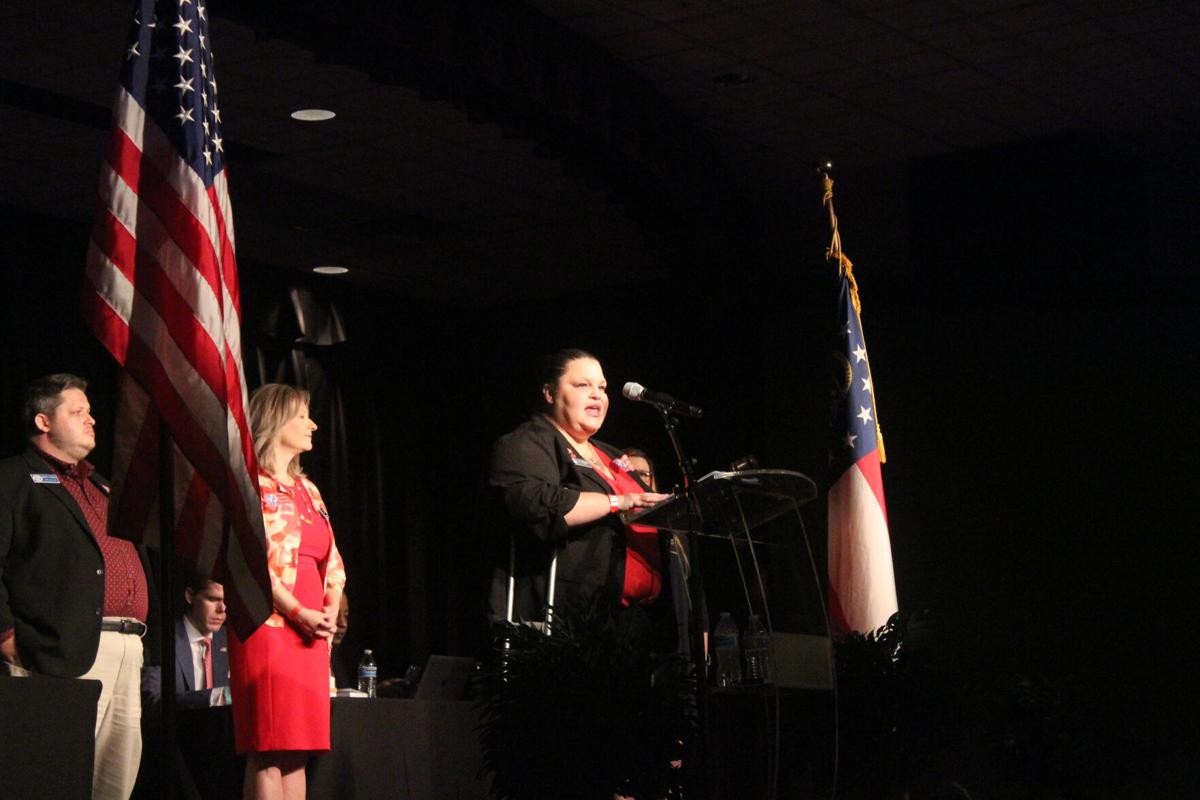 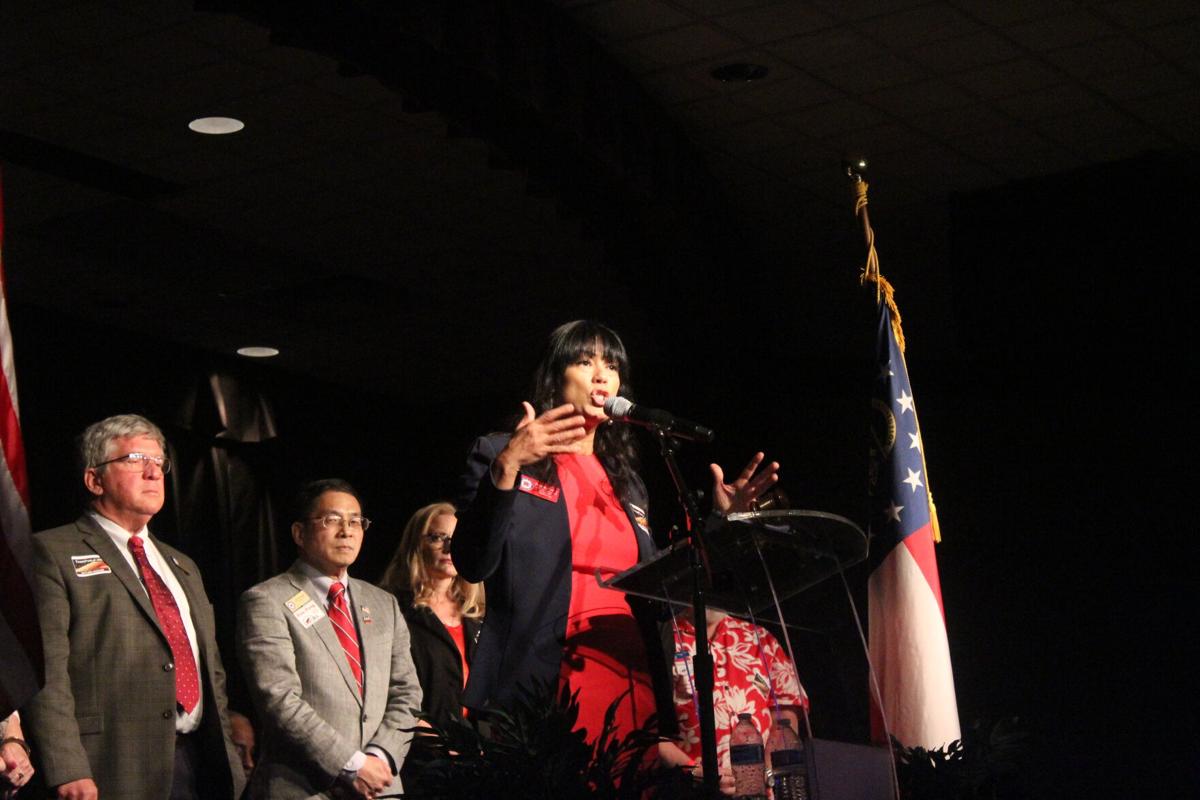 Making her case to lead the Cobb GOP, Pamela Alayon said the organization's membership had increased 70% since August under her watch. 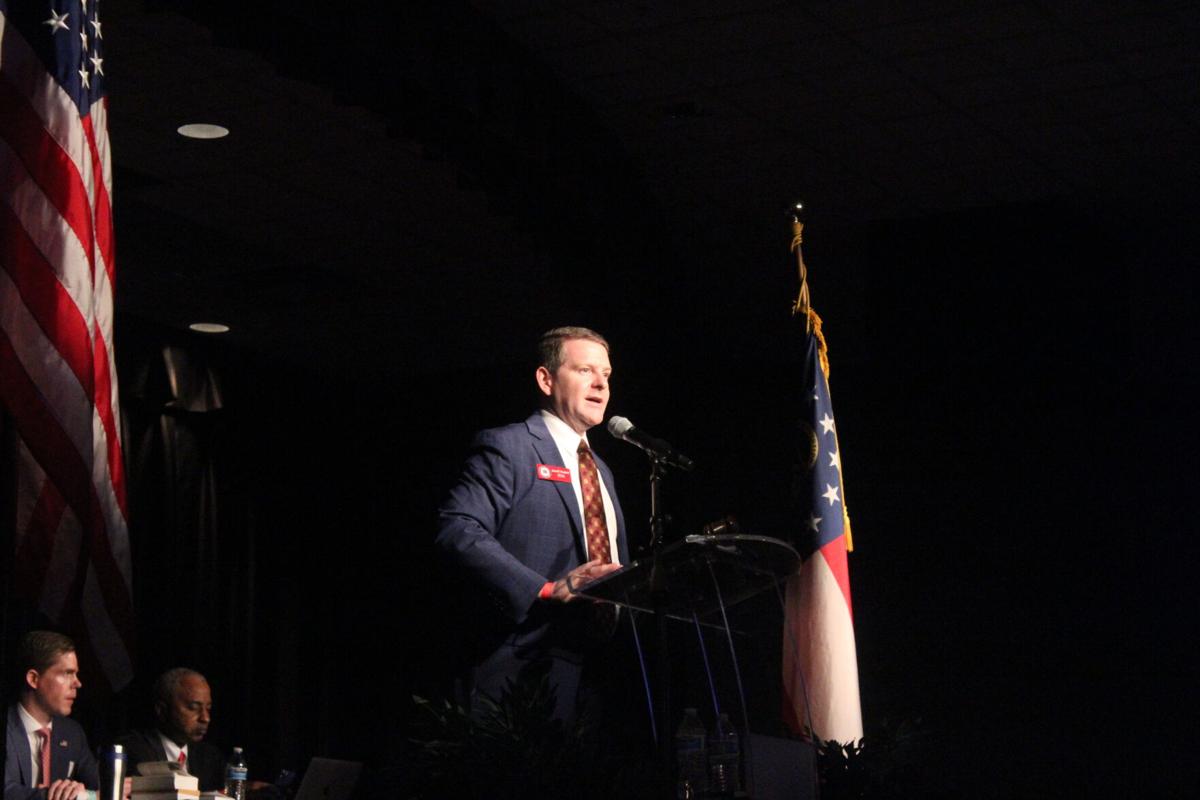 Businesswoman Salleigh Grubbs was chosen as the new chair of the Cobb GOP on Saturday.

Salleigh Grubbs took more than 50% of the vote in the three-way race, avoiding a runoff.

The Cobb GOP's 2021 convention was at Roswell Street Baptist Church.

Making her case to lead the Cobb GOP, Pamela Alayon said the organization's membership had increased 70% since August under her watch.

In a three-way race, Grubbs took more than 50% of the vote, avoiding a runoff. She bested opponents Lisa Adkins, of Kennesaw, first vice chair of the 11th Congressional District, and Pamela Alayon, of east Cobb, the Cobb GOP’s former vice chair of membership.

“I’m an unapologetic patriot,” Grubbs said in a speech before the vote. “I’m the only America-first and the only Cobb-first candidate in this election. It is my plan to bring us together to work together to defeat the Democrats.”

Grubbs said she would mobilize county conservatives ahead of the 2022 elections. Last year, Cobb Democrats had their best election in decades, taking every countywide seat on the ballot.

“You know it’s bad when you lose your clerk of court,” Grubbs said.

Grubbs was the only candidate to mention Trump by name in her speech.

“President Trump gave us a great start,” she said. “He gave us the policies and he gave us the roadmap to save our country. And there are some people in this room who may not like President Trump, but let me tell you, I love his policies.”

So too did attendees of Saturday’s convention, held at Roswell Street Baptist Church.

Tony Roland, of east Cobb, said he had voted for Grubbs because she understood the party had made gains under Trump’s leadership and would try to build on that legacy rather than turn from it.

Speaking before the winner had been announced, Marietta’s Rusty Cothran said he had voted for Alayon for her go-getter mentality and willingness to listen to those around her. And she would, he added, “follow Trump’s lead and the direction that he’s given the Republican Party.”

In their pre-vote speeches, Alayon and Adkins emphasized the need to expand the GOP’s voter base.

Alayon said the Cobb GOP’s membership has increased 70% since August under her watch. But, she went on to say, the party has an “image problem.”

“We’re not all racists, we’re not all these things that the Democrats say we are. We need to take control of our own narrative.”

Adkins said the party needed to work double-time to attract more millennial and Generation Z voters — those born in the early 1980s and on — and more minority voters.

“If you look around this room, we unfortunately do not see very many millennial and (Generation) Z voters,” she said. “But when you look at the data of Cobb County, Gen Z and millennial voters outnumber the traditionalists and baby boomers combined.”

She said she wanted those voters to know the GOP is the “true party that embraces minorities, that embraces people of all ages and whatever other bucket the Democrats want to put people in.

“We judge people by the content of their character, not any other characteristic.”

Several attendees said they would have been happy no matter the outcome.

James Jordan, secretary of House District 35, expressed a preference for Grubbs. But, he added, there was little acrimony between the candidates and their supporters. who, by and large, agree on issues and priorities.

“I think our principles are sound, and I think everybody agrees on the principles,” he said before the vote. “They may have different ways of getting there.”

Tammy Slaten said she was reengaging with the local party after a long hiatus tending to her ailing parents. Although she was not a delegate to the convention and couldn’t vote for the chairperson, she had hoped Grubbs, the preferred candidate for her in-the-know friends, would win.

Slaten said she was upset by recent events both nationally and locally.

“If you want to stop the RINOs and stop — I feel like, we vote on people and all they do is stab us in the back,” she said, using the shorthand for “Republicans In Name Only.” “We’ve got to all be united in our conservative values and not pretend like we’re conservative and then get there and do something else. I feel like (Grubbs) will do what she says, and I feel like she connects with me as far as the values that we have and what conservatism is.”

A member of the Marietta High School class of 1983, Grubbs has two adult sons and runs a manufacturing-related company in Fulton County. Her two-year term as Cobb GOP chairwoman took effect at the conclusion of Saturday’s convention.

Stand up and fight! Don’t be meek and mild. That doesn’t work with the likes of AOC, Maxine Waters, the Squad. Get down and dirty like the democratic members, fight like you never have before because our country, religion and the flag are all in danger if you don’t. Do Whatever it takes to win.

From Fox News Website, Maxine Waters in Minn. through Monday:

"I know that everyone here will soon be marching over to the Capitol building to peacefully and patriotically make your voices heard," Trump said in his speech. "Today we will see whether Republicans stand strong for [the] integrity of our elections, but whether or not they stand strong for our country, our country. Our country has been under siege for a long time, far longer than this four-year period." YOU BE THE JUDGE!!

Just like Mike said above and from a comment made on Fox News Website, this is NO time to be timid!! Democrats will go anyplace they want to just to stir up more trouble and that includes Cobb County so BE STRONG Salleigh!!

If the Republicans blink once to the Democrats, there will be targets painted on all Republican's backs! Please be STRONG Salleigh!!

Theodore Decker: Northwest Georgia, doesn't your congresswoman have a statue to save?

Which credit card rewards deals are best for you? - That’s Rich! Q&A

McIntosh SO: Man found in Cathead Creek was murdered

Woman in alleged high-speed chase out of hospital, behind bars

On Gardening: Leading Lady headlines Year of the monarda

The cicadas are coming. Here’s what you need to know about Brood X.