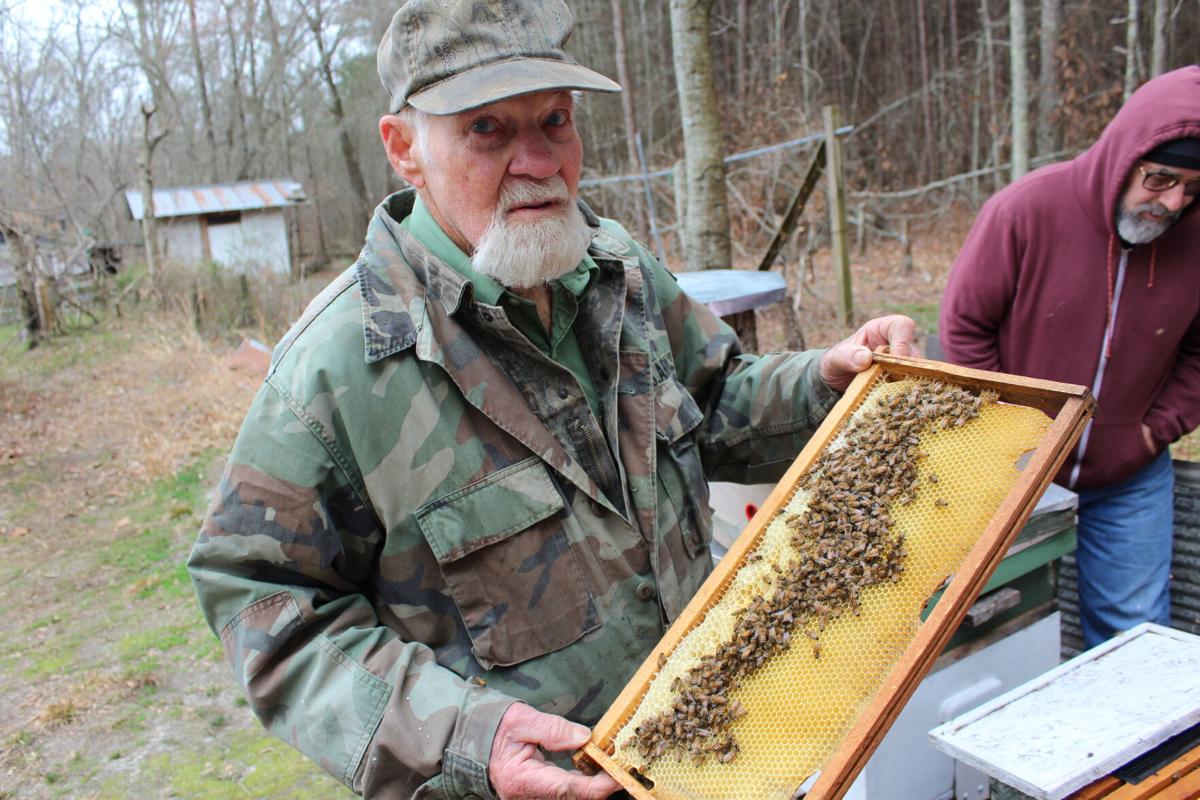 Ray Jones holds a frame of bees as he checks on the last remaining hive at his property in west Cobb. 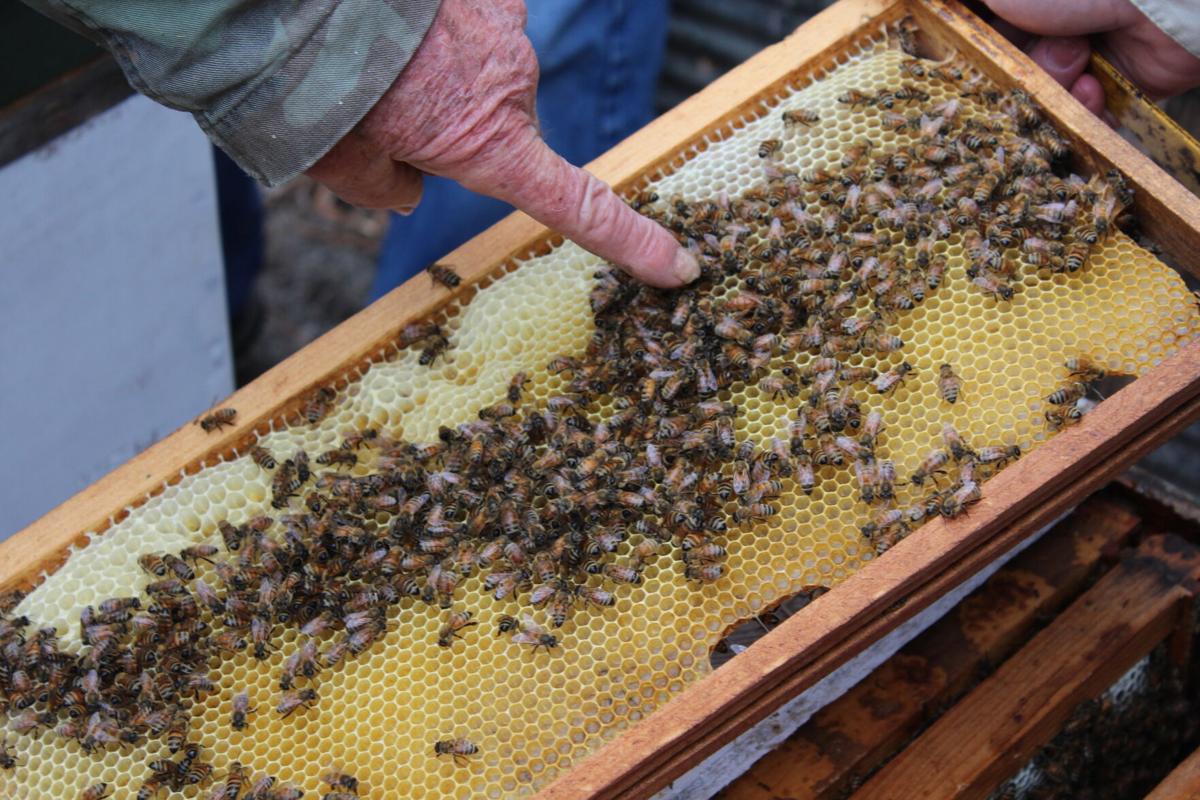 Ray Jones removes a frame of bees from his remaining bee hive. 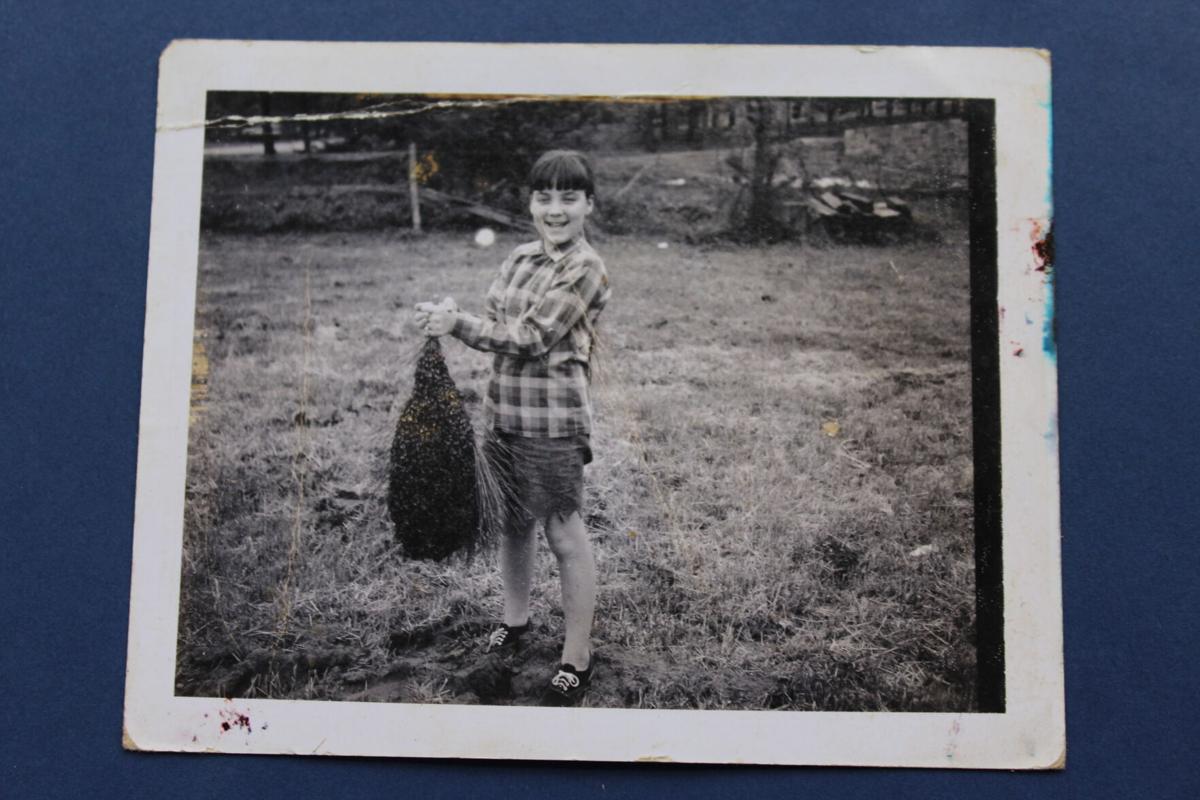 This photo from the 1960s shows one of Ray Jones' daughters holding a swarm of bees. 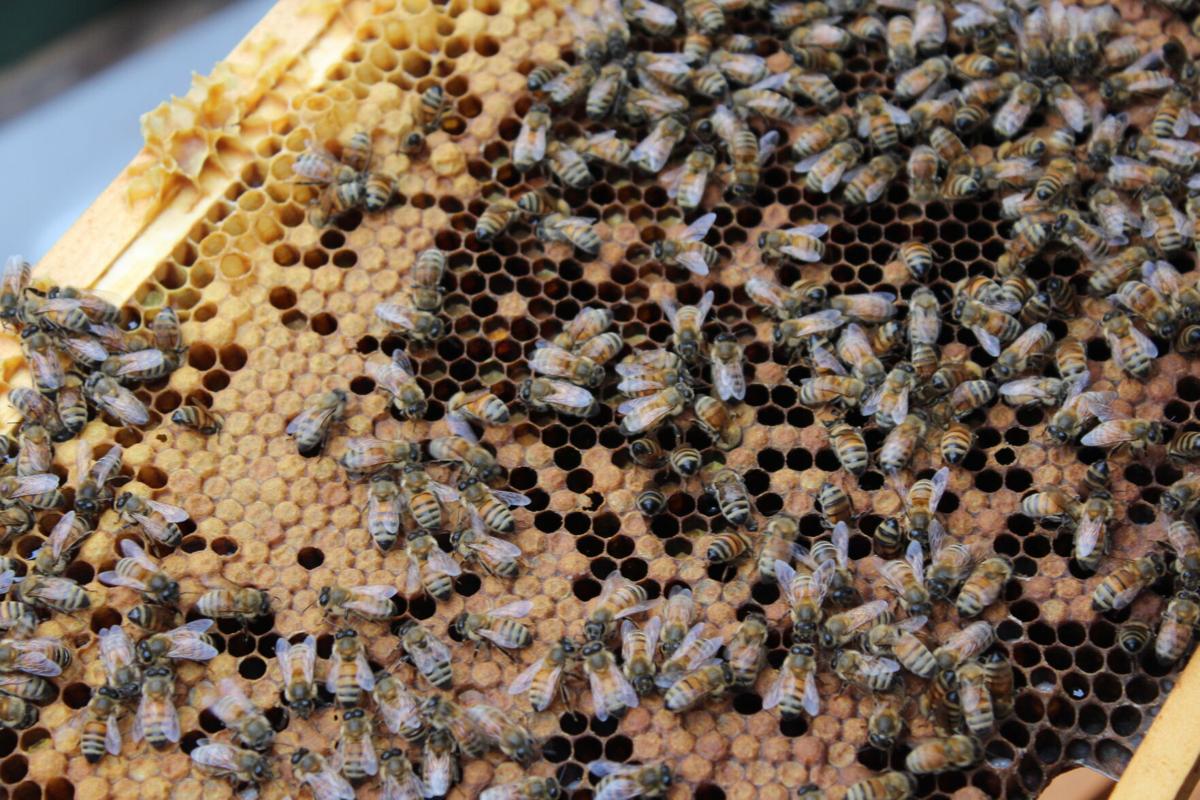 A closeup shot of bees from Ray Jones’ hive. 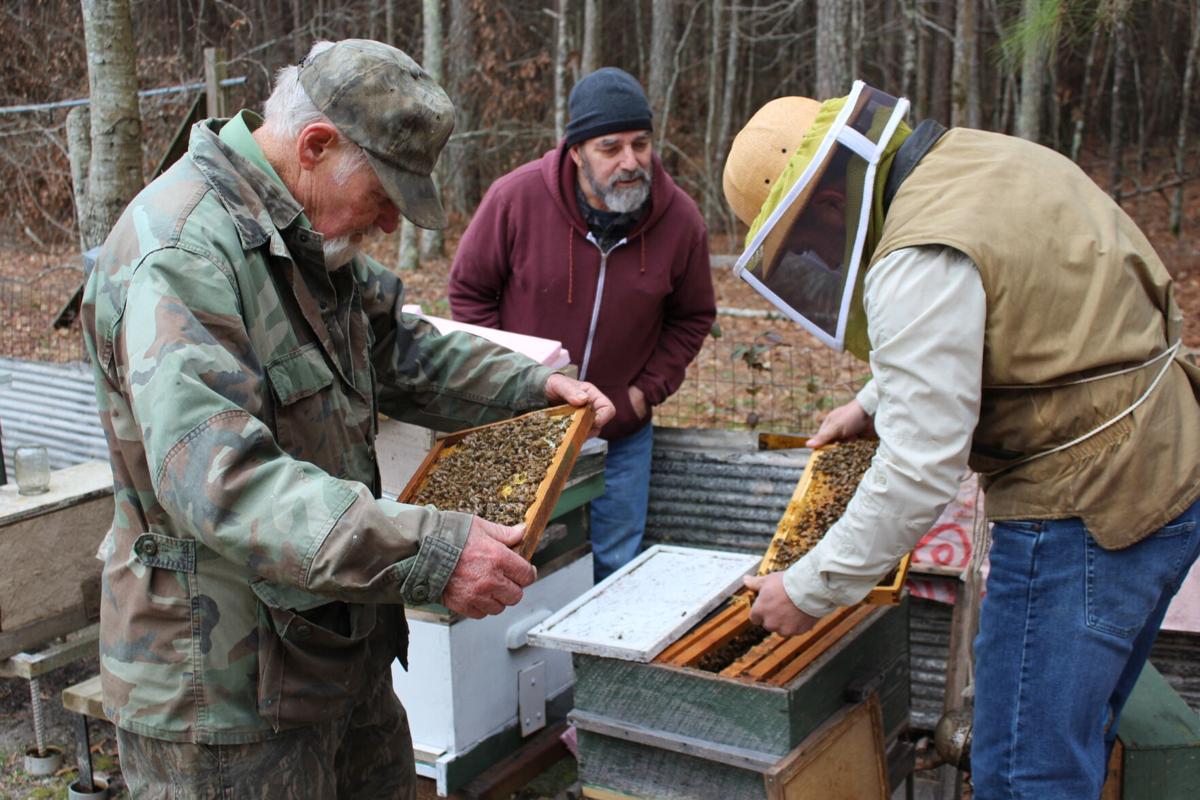 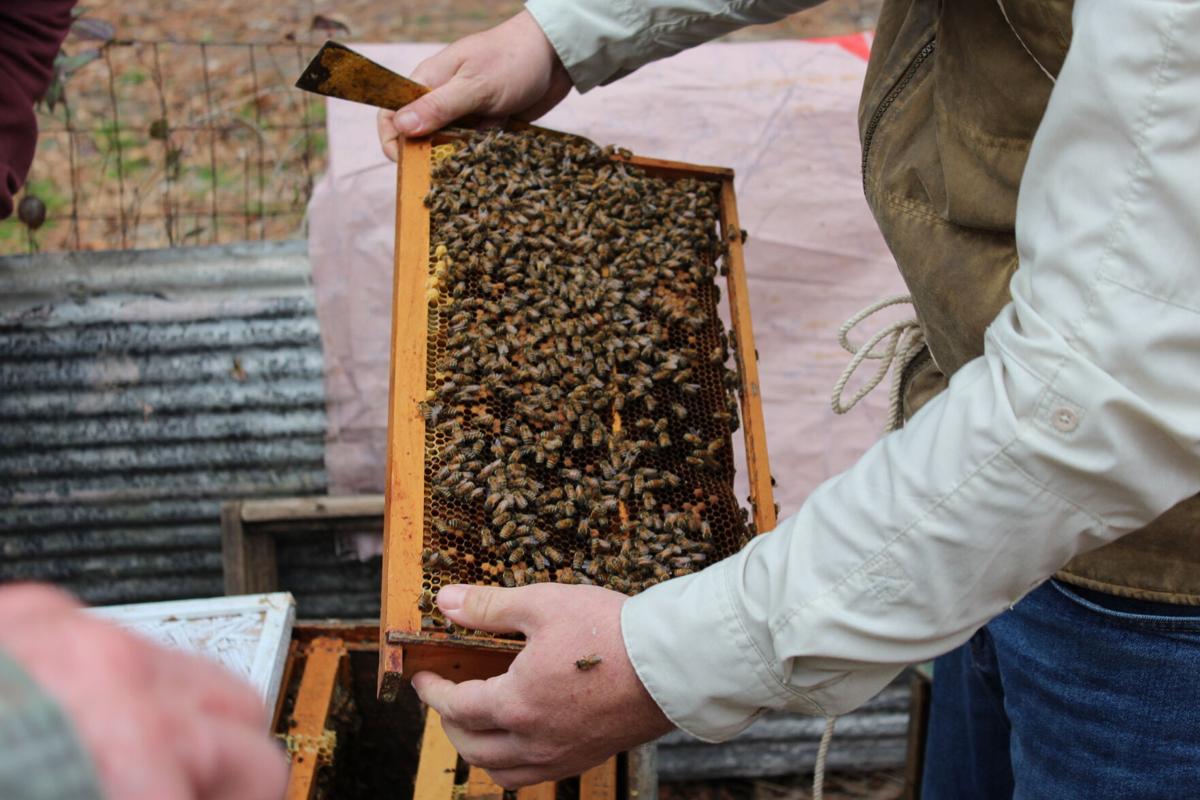 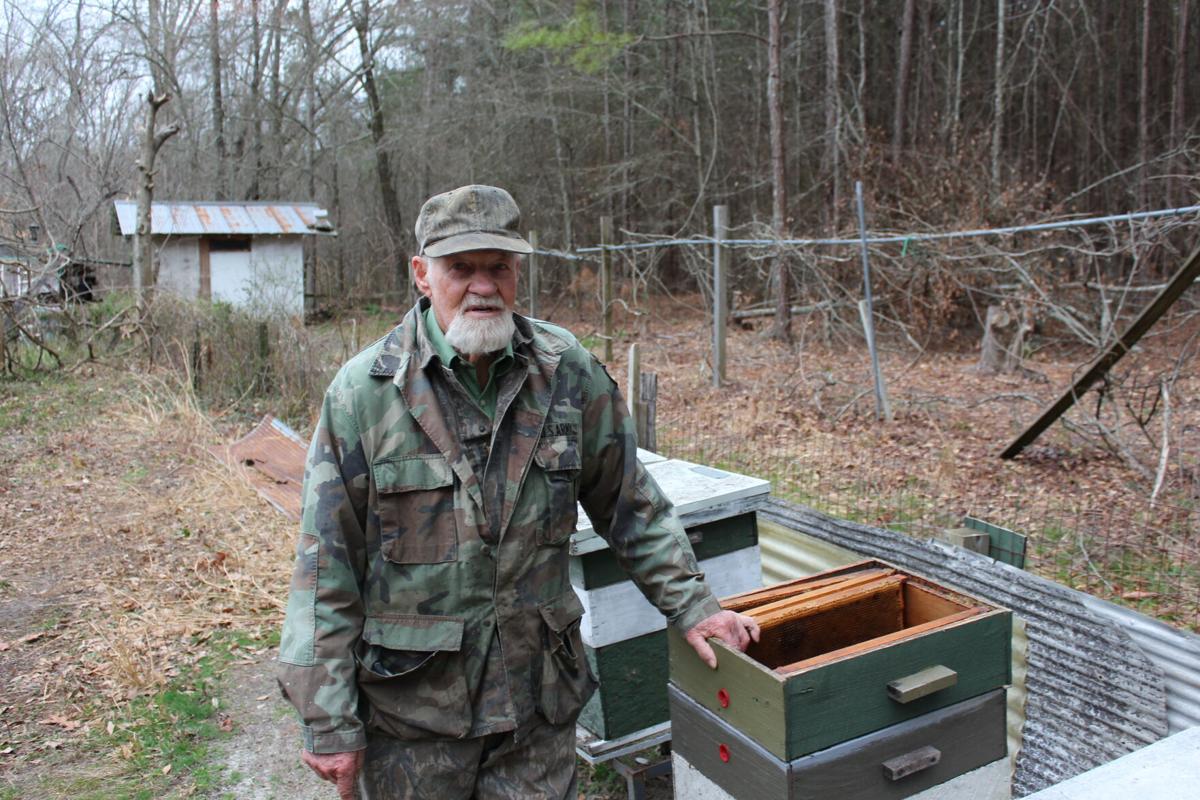 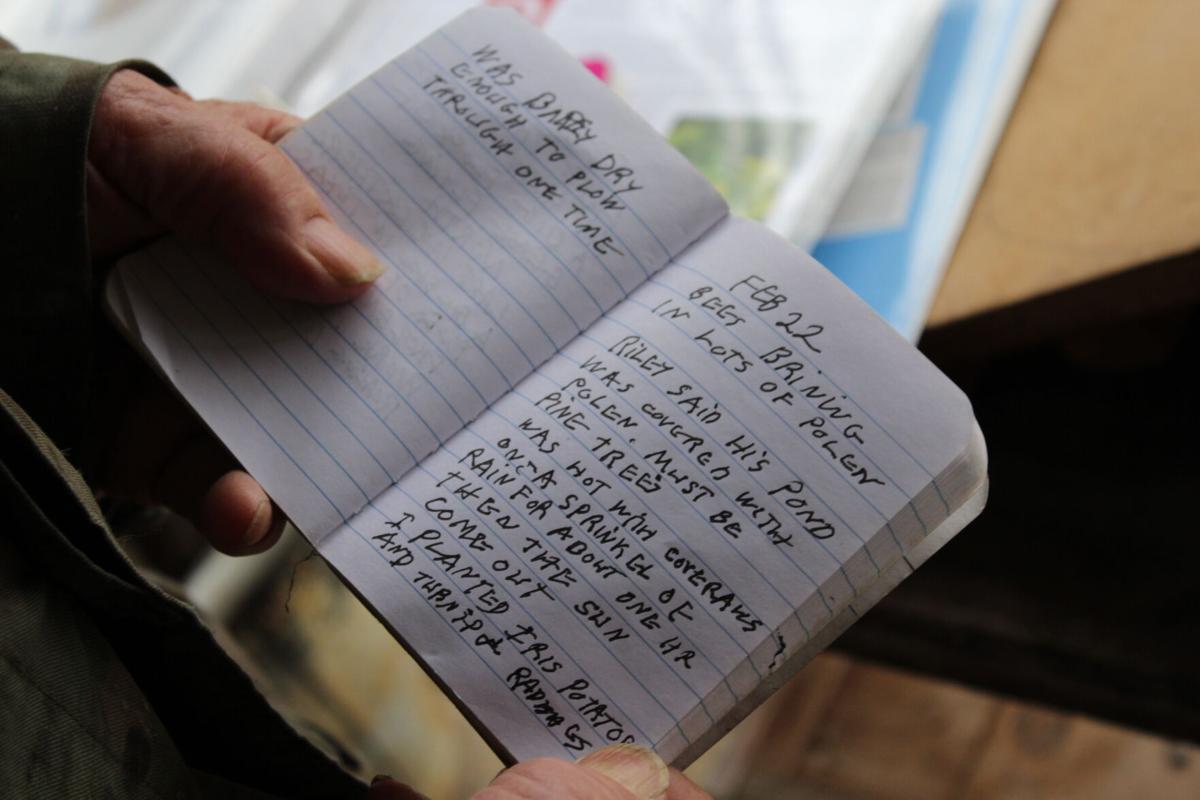 Ray Jones flips through a pocket-sized notebook he uses to record observations and notes about his bees and his garden. 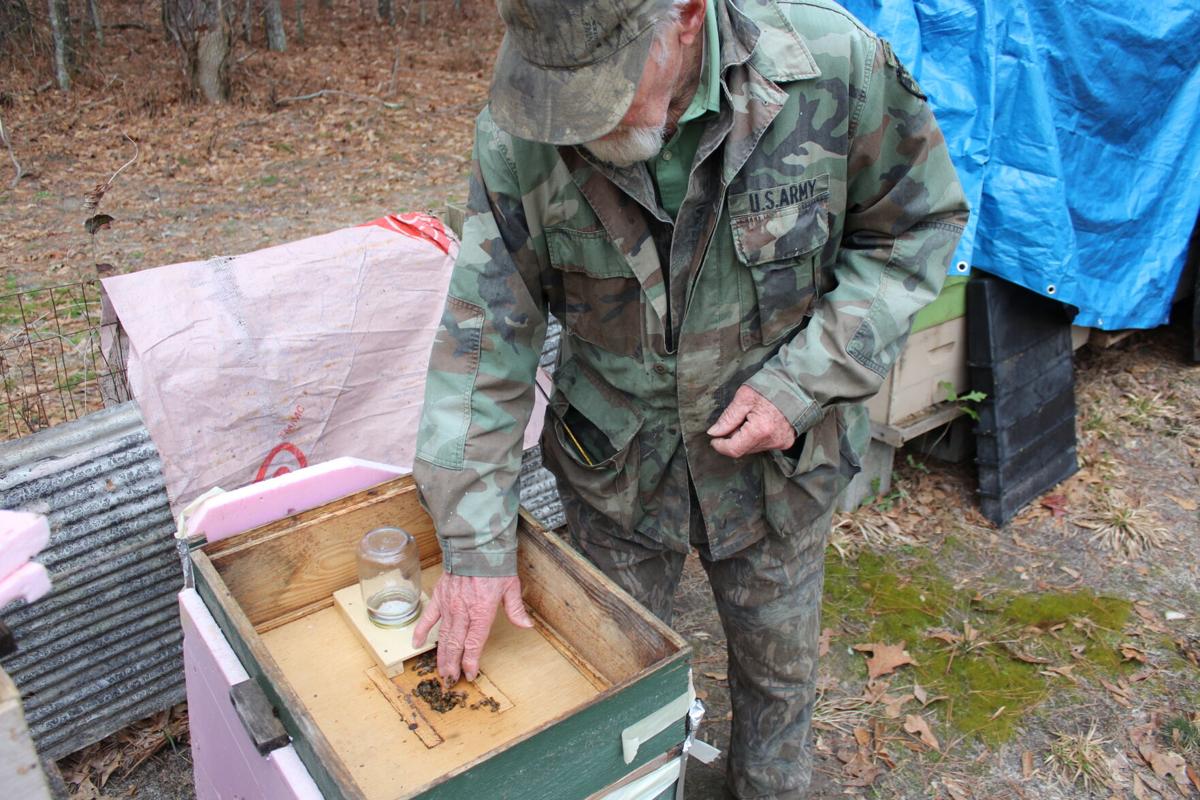 Ray Jones checks on the bees in his last remaining hive. 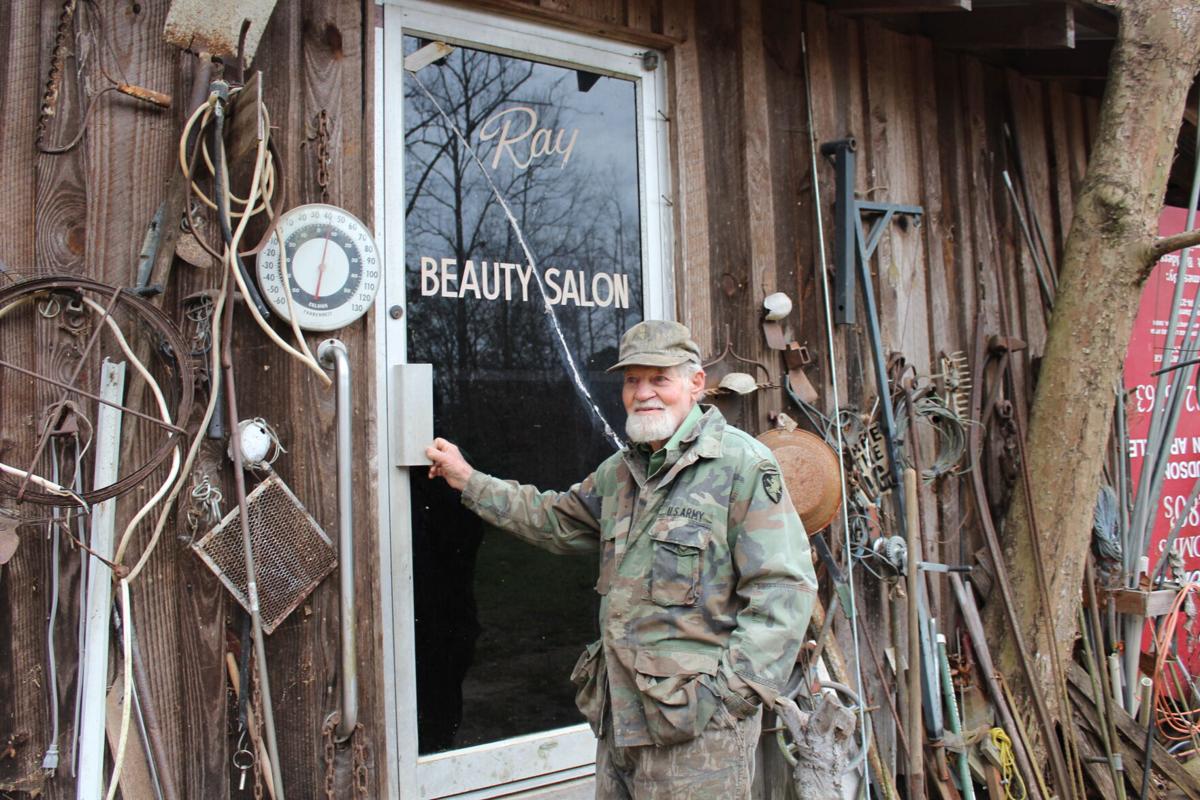 Ray Jones stands in front of a tool shed on his property. A former builder, Jones salvaged the glass door from a construction site years ago.

Ray Jones holds a frame of bees as he checks on the last remaining hive at his property in west Cobb.

Ray Jones removes a frame of bees from his remaining bee hive.

This photo from the 1960s shows one of Ray Jones' daughters holding a swarm of bees.

A closeup shot of bees from Ray Jones’ hive.

Ray Jones flips through a pocket-sized notebook he uses to record observations and notes about his bees and his garden.

Ray Jones checks on the bees in his last remaining hive.

Ray Jones stands in front of a tool shed on his property. A former builder, Jones salvaged the glass door from a construction site years ago.

POWDER SPRINGS — Ray Jones is at a loss. At 91, he’s been an amateur beekeeper since he was 18— more than seven decades. But as of late, his honeybees have been dying in droves.

During the winter, bees always cluster together to stay warm, eating reserved honey. Some population decline is to be expected. But Jones has been losing entire colonies. He’s gone from about a dozen active colonies to just one since September.

At their peak, each hive can hold up to 20,000 bees. During particularly tough seasons, Jones has lost hives and been able to build them back up by purchasing new colonies from large, commercial apiaries. His frustration, though, makes him wary of investing in more colonies.

“Right now, I feel like if I get more bees I’d lose more,” Jones said. “I lost most all my bees — years ago I lost them all and I built back up to where I had about 20 (hives).”

So, while losing entire colonies isn’t new, Jones says that over the course of his beekeeping career, it’s gotten progressively harder to maintain them.

“Years ago, you didn’t have to worry about a mite or a beetle, when I first started raising them,” he said.

A retired builder and army veteran, for Jones, beekeeping has always been a hobby and passion project. He doesn’t bother with wearing a veil. He gets stung nearly every day but is convinced it’s good for his rheumatoid arthritis.

The fruit of his labor is honey. Last year he produced between 70 and 80 quarts of the stuff — the year before, 100. It’s far too much for his wife and him to consume, so he mostly gives it away.

Jones recently saw a TV ad for a fruit and vegetable supplement called Balance of Nature.

“I’m calling my honey ‘balance of nature,’” Jones joked. “‘Cause a bee goes to every flower out there. And it got to be balanced, hasn’t it?”

Adjacent to his ailing hives is a wooden shelter, his own handiwork. He stores supplies, tools, binders of old beekeeping printouts and articles, and various bee-related sundries.

Every year, he christens a new handheld notebook, tracking the bees’ condition and progress, jotting down observations as he takes care of them.

What exasperates Jones most about losing hives is that it could be anything.

A common culprit is pests, particularly Varroa mites. Around the mid-20th century, the parasitic mites, which originally attacked Asian honeybees, adapted to go after the main species of bees in America —the European honeybee, according to Science Magazine.

So, experts recommend treating one’s bees twice a year to prevent mites from taking root. They also say to regularly switch up the treatment used, to prevent mites from developing immunity. Jones worries the last product he tried may have backfired and hurt the bees, but he’s just not sure.

Recently, Jones gave a hive to his nephew, Matthew Sawyer of Marietta. Sawyer’s hive is still going strong. Jones in the past has wondered if a pesticide being used in his neighborhood could be the cause of the bees’ ills. Why one hive survives or another one dies is a guessing game.

Sawyer subscribes to the pesticide theory, but acknowledges it’s his “opinion, not fact. But, all these people call out the bug man and say, ‘Hey, I don’t like these mosquitoes around here.’ And that stuff kills everything that flies.”

This week, an apiary inspector from the state of Georgia came out to see if he could identify what was troubling Jones’ bees.

“He talked like (they) might’ve been low on food, but I’m not sure about that,” Jones said. “I got to think that over.”

Across the world, due to various reasons — mites, pathogens, pesticides, poor nutrition, climate change and loss of habitat — bees are more susceptible to dying than they once were.

Scientists have seen the puzzling phenomenon of colony collapse disorder subside over the past few years, but the bees are still threatened, mainly by man-made factors.

The winter of 2018-2019 saw record losses in the U.S., with beekeepers losing about 40% of their colonies, a University of Maryland study found. Each year, the number is close to a third of honeybee colonies.

The bees are vital to agriculture. More than 100 crops grown in the U.S. rely on pollinators like honeybees, per the U.S. Department of Agriculture. A serious, sustained decline in bees could cause shortages and price increases.

Jones has watched the issue worsen over time. He worries about a future without honeybees.

“Bees pollinate everything out there,” Jones said. “And if there’s not any bees, I don’t know what’s going to happen to the world.”

Atlanta named one of the top 5 cities for urban gardening

A matter of trust: How the new Emily Rodgers album came to life