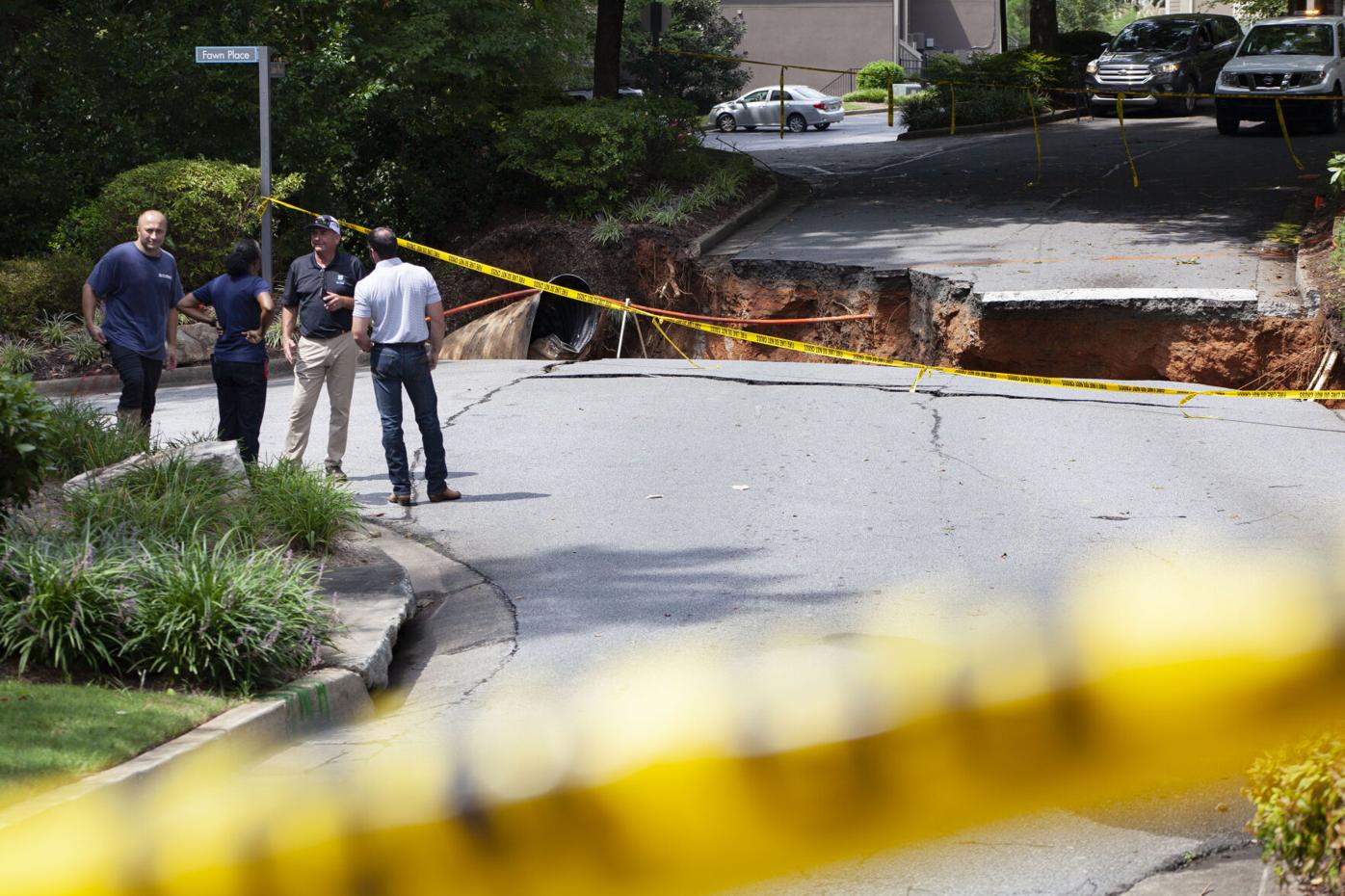 Crews discuss how to repair a collapsed road at an entrance to Watermark at East Cobb by Cortland apartments off Roswell Road on Wednesday afternoon. 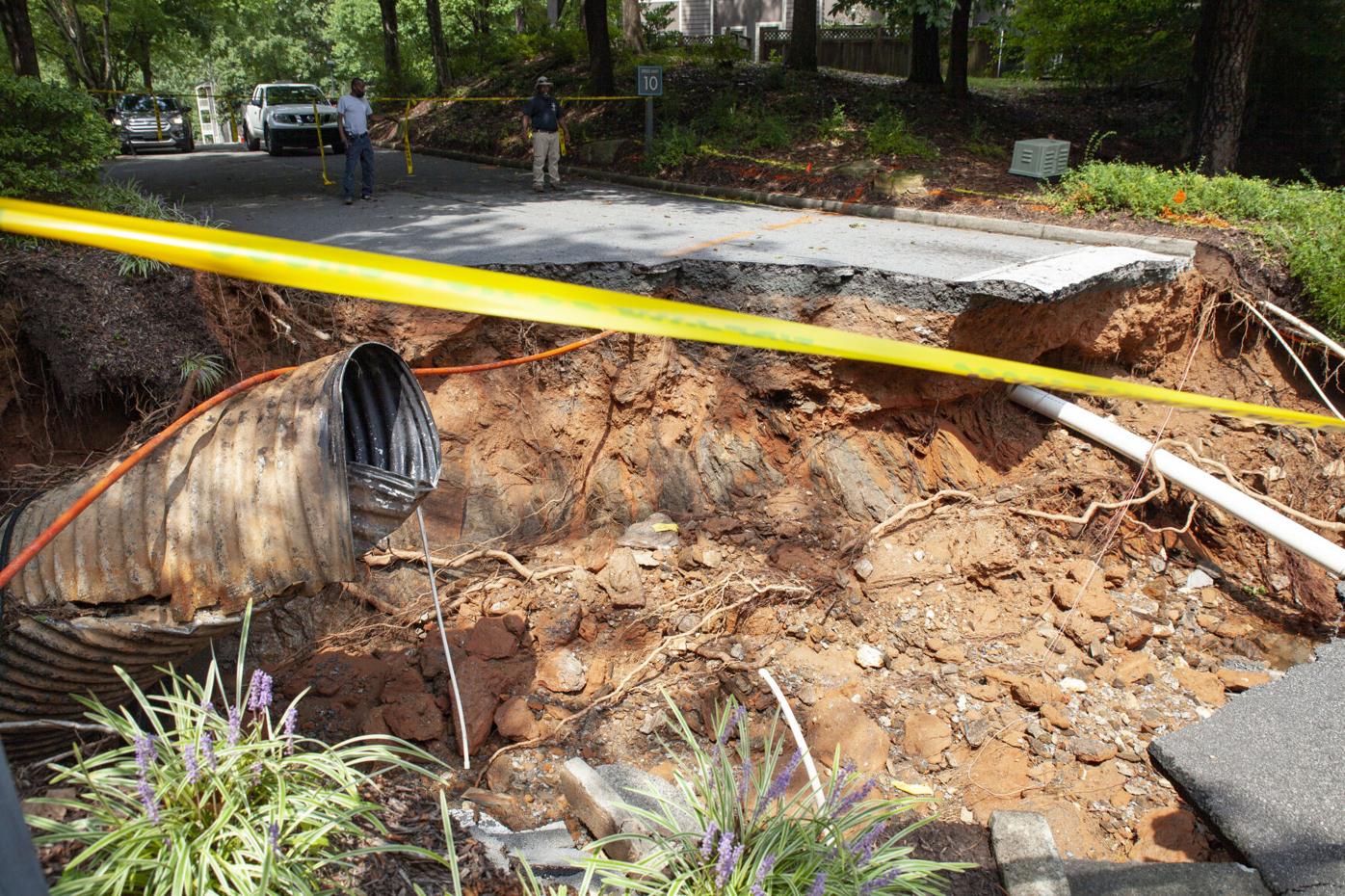 A portion of an entrance to Watermark at East Cobb by Cortland apartments off Roswell Road collapsed following overnight storms Tuesday that led to damage and flooding in parts of Cobb. Crews on-site Wednesday afternoon discussed how to repair the entrance.

Crews discuss how to repair a collapsed road at an entrance to Watermark at East Cobb by Cortland apartments off Roswell Road on Wednesday afternoon.

A portion of an entrance to Watermark at East Cobb by Cortland apartments off Roswell Road collapsed following overnight storms Tuesday that led to damage and flooding in parts of Cobb. Crews on-site Wednesday afternoon discussed how to repair the entrance.

Government officials say cleanup continues at parks and on certain roads collapsed by flood waters Tuesday night and early Wednesday, when a severe thunderstorm system brought up to 6 inches of rain and flash flooding to Cobb.

As of Thursday afternoon, the Georgia Red Cross, who had been called in on Wednesday, said it was assisting 16 Cobb County families affected by flooding. That number was up from the 10 reported on Wednesday afternoon.

Ruby Ramirez, a regional spokesperson, said the majority of Cobb families getting help from the Red Cross live in the Grandstand Apartments complex on Windcliff Drive, just north of Terrell Mill Road’s intersection with Interstate 75.

Scores of vehicles at Marietta Crossing apartments on Powers Ferry Place were also damaged by floods that partially or fully submerged many cars, trucks and motorcycles.

On Wednesday, county officials reported on social media that the Cobb Department of Transportation responded to more than two dozen flooded roadways and cleared eight streets closed by fallen trees.

On Thursday, county officials said the gymnastics center remained closed and Cobb DOT was continuing its cleanup at various locations across the county, though all roads are now passable.

Cobb Parks crews continued their cleanup at East Cobb Park off Roswell Road on Thursday, and most of the park was reopened to visitors. Some sections, especially near eroded stream banks, remained off limits as of Thursday.

At Fullers Park, adjacent East Cobb Park, the county said a large tree fell and damaged a nearby resident’s fence. The county is replacing that fence.

A lacrosse field on Robinson Road, meanwhile, remained closed due to flooding as of Thursday afternoon.

A sinkhole on a road managed by the city of Marietta near the entrance to Fair Oaks Park also prompted the county to close that park’s main entrance. Access was still available through a rear entrance on Thursday, but county officials said that entrance may be closed early, “due to its proximity to neighborhood homes.”

Crews also continue working on private roads, like the collapsed entrance on East Lake Parkway leading to the Watermark at East Cobb by Cortland apartment complex, which cut off traffic and utilities.

The East Lake Parkway entrance off Roswell Road was cut off after the creek below overflowed and washed the road out. Crews on scene Wednesday afternoon said water to the apartments had been cut off temporarily as they figured out how to make repairs.

Marietta City Manager Bill Bruton said Marietta saw flooding “all across the city,” and that once the waters receded, cleanup and repairs began immediately.

“Our crews are working overtime this week and over the weekend to clean up the debris, and hope to be finished by the first of next week,” Bruton said. “There are various bridges and road creek crossings that are going to take longer.”

Bruton said a stream behind the Marietta Police Department overflowed, and flood water entered the basement of the police station during the heavy rains. The damage there will be repaired “over the next couple of weeks.”

Some of the Marietta Board of Lights and Water equipment and vehicles were also damaged by the high water and are being worked on.

Bruton also said many private residences and businesses saw flooding, and their owners “are addressing the needed repairs with our permitting and inspection staff.”

Among the damaged Marietta roads and water crossings, Pickens Industrial Drive in north Marietta, which was was washed out and collapsed, will take about four weeks to reconstruct, Bruton said.

To allow access to the businesses on that street, the city will bring in a temporary bridge, which he said will be installed next week.

Marietta’s Booth Road, off Powder Springs Street, also had a waterway crossing collapse and will take about four weeks to repair, he said. Meanwhile, traffic has been rerouted.

Bridge crossings on Cole Street and Bellemeade Drive did not have failures, but their stream banks were damaged and crews will be working there over the next six weeks, Bruton said.

Buss said many playgrounds had mulch wash or float out of their borders, as did some of the landscaped areas. Most of that material can be “raked or blown back in place,” he said, though some will have to be replaced.

Meanwhile, City Club Marietta, the city golf course, had most of bunkers washed out, Buss said.

“Some of the sand can be reclaimed but we will need to purchase and install some new sand. There was a small washout on one of the fairways that will need some dirt replacement and some sod,” he said.

Other than that, a few branches fell in some parks, but “we feel fortunate,” Buss said.

The Cherokee County Homeless Veteran Program has just finished a memorandum of understanding with the United Way 211 Program to provide access to a new pilot LYFT program that will provide veterans with ride share capabilities to get to and from their jobs.

A flash flood watch for Cobb County has been extended until 8 a.m. on Tuesday, according to the National Weather Service.